Late Summer and early Autumn brings out flowers that match in colour these seasons and where they overlap. In Pittwater’s bush surrounds and park reserves varieties of Banksias are out at present in bright yellows and deeper oranges in spikes that are round and full heads of fine yellow strands or more compact combs.

Banksia is a genus of around 170 species in the prehistoric plant  family Proteaceae. There are around 72 kinds of known banksias and new ones still being found. These Australian wildflowers (bush flowers) are also popular garden plants and easily recognised by their characteristic flower spikes and fruiting "cones" and heads. They range in size from prostrate woody shrubs to trees over 30 metres tall. Each species thrives in landscapes that suit and promote their growth, along our sandstone coasts and heathlands, in sclerophyll forests, rainforests, beside sandy beaches and in stony soil, and even more arid landscapes. Their leaves vary between varieties and sizes range from the narrow, 1–1½ centimetre long leaves of B. ericifolia (Heath-leaved Banksia), to the large leaves of B. grandis (Bull Banksia); these may exceed 45 centimetres. Most species have serrated edges, but a few, such as B. integrifolia, have spikes alike pine needles. This green to grey foliage grows along the branches in irregular spirals in some species while in others they they are crowded together in whorls. Many species have differing juvenile and adult leaves (e.g. Banksia integrifolia has large serrated juvenile leaves).

A tree in flower may also simultaneously have old seed cones, finished flowers and those not yet open among those that glow at peak. A single banksia has hundreds, and in some species, thousands of flowers attached to a central stem (inflorescence) and range in colour from the yellows and light greens of the immature ones we see now, to deeper pinks, reds and even purple species have been recorded.

Named after Joseph Banks by Carolus Linnaeus the Younger in his April 1782 publication Supplementum Plantarum; hence the full name for the genus is "Banksia L.f.", the genus name honours the English  botanist  Sir Joseph Banks, who collected the first Banksia specimens in 1770, during James Cook's first expedition to Australia.

The illustrations that form part of this page are by Sydney Parkinson, a young man who accompanied Banks on the Endeavour voyage and sketched and illustrated close to 950 specimens of plants and coloured himself nearly 270 of these. Unfortunately Sydney Parkinson contracted malaria near Java on the way home and died soon after the Endeavour reached South Africa. Some of these may have been coloured by John Frederick Miller who was also employed in an illustrator’s capacity, along with seven others, on Bank’s return. The colourists could also refer to the specimens themselves, which were now part of Banks' herbarium at his home. A great Florilegium  (anthology of flowers) of his work appears in the work was finally published in 1988 by Alecto Historical Editions in 35 volumes and has been digitized by the Natural History Museum in London.

To our indigenous peoples they were associated with spirituality, particularly the kind named Old Man Banksia, which was associated with women’s spirituality. The sweet nectar can by sucked out of the flowers or shaken onto your hand and licked off, or the flower spikes can be soaked in water to produce an essence that is then sipped or drank to heighten awareness or address some of the seasonal symptoms associated with the change of seasons, sluggishness or turning that slight nostalgic sadness we may all feel at the close of summer into enjoyment of a golden autumn. Banksias were also used to carry fire as the smouldering cones could be carried for long distances.

In our culture some associate banksias with May Gibb's "Banksia men" from May Gibbs' Snugglepot and Cuddlepie children's book. Gibb's "Banksia men" are modelled on the appearance of aged Banksia "cones", with follicles for eyes and other facial features. There is some contention over which species actually provided the inspiration for the "Banksia men": the drawings most resemble the old cones of B. aemula, but B. attenuata (Slender Banksia) has also been cited, as this was the species that Gibbs saw as a child in Western Australia.

There is also the Banksia Environmental Foundation created in 1989 to support and recognise people and organizations that make a positive contribution to the environment. The Foundation launched its annual Banksia Environmental Awards in the same year.
Banksia. (2012, March 22). In Wikipedia, The Free Encyclopedia. Retrieved from http://en.wikipedia.org/w/index.php?title=Banksia&oldid=483330475 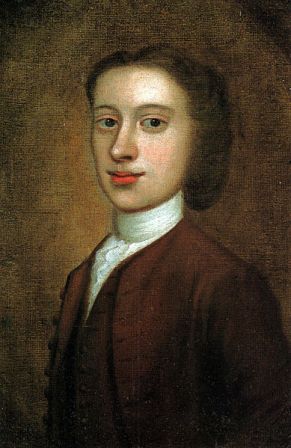 Sydney Parkinson (c. 1745 – 26 January 1771) was a Scottish Quaker,  botanical  illustrator and natural history artist. Parkinson was employed by Joseph Banks to travel with him on James Cook's first voyage to the Pacific in 1768. Parkinson made nearly a thousand drawings of plants and animals collected by Banks and Daniel Solander on the voyage. He had to work in difficult conditions, living and working in a small cabin surrounded by hundreds of specimens. InTahiti he was plagued by swarms of flies which ate the paint as he worked. He died at sea on the way to Cape Town of dysentery contracted at Princes' Island off the western end ofJava. Banks paid his outstanding salary to his brother.

Parkinson is commemorated in the common and scientific name of the Parkinson's Petrel Procellaria parkinsoni. The great Florilegium of his work was finally published in 1988 by Alecto Historical Editions in 35 volumes and has since been digitized by the Natural History Museum in London. In 1986 he was honoured on a postage stamp depicting his portrait issued by Australia Post . Sydney Parkinson. (2011, December 9). In Wikipedia, The Free Encyclopedia. Retrieved from http://en.wikipedia.org/w/index.php?title=Sydney_Parkinson&oldid=464888331 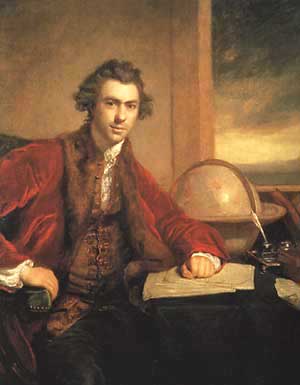 Sir Joseph Banks, 1st Baronet, GCB, PRS (24 February [O.S. 13 February] 1743 – 19 June 1820) was an English naturalist, botanist and patron of the natural sciences. He took part in Captain James Cook's first great voyage  (1768–1771). Banks is credited with the introduction to the Western world  of eucalyptus, acacia, mimosa and the genus named after him, Banksia. Approximately 80 species of plants bear Banks's name. Banks was also the leading founder of the African Association, a British organization dedicated to the exploration of Africa, and a member of the Society of Dilettanti, which helped to establish the Royal Academy.

Endeavour voyage
Banks was appointed to a joint Royal Navy/Royal Society scientific expedition to the south Pacific Ocean on HM Bark Endeavour, 1768–1771. This was the first of James Cook's voyages of discovery in that region. The voyage then progressed to Tahiti (where the transit of Venus was observed, the overt purpose of the mission), to New Zealand and to the east coast of Australia, where Cook mapped the coastline and made landfall at Botany Bay and at Endeavour River (near modern Cooktown) inQueensland, where they spent almost seven weeks ashore while the ship was repaired after foundering on the Great Barrier Reef. While they were in Australia Banks, the Swedish botanist Daniel Solander and the Finnish botanist Dr. Herman Spöring Jr. made the first major collection of Australian flora, describing many species new to science. Almost 800 specimens were illustrated by the artist Sydney Parkinson and appear in Banks' Florilegium, finally published in 35 volumes between 1980 and 1990.

It was Banks's own time in Australia, however, that led to his interest in the British colonisation of that continent. He was to be the greatest proponent of settlement in New South Wales: in fact, the name "Banksia" was proposed for the region by Linnaeus. In the end a genus of  Proteaceae was named in his honour as Banksia. Joseph Banks. (2012, April 4). In Wikipedia, The Free Encyclopedia. Retrieved from http://en.wikipedia.org/w/index.php?title=Joseph_Banks&oldid=485554219

Picture: Joseph Banks, as painted by Sir Joshua Reynolds in 1773.

John Frederick Miller (1759–1796) was an English illustrator, mainly of botanical subjects. Miller was the son of the artist Johann Sebastian Müller (1715 – c. 1790). Miller, along with his brother James, produced paintings from the sketches made by Sydney Parkinson on James Cook's first voyage. He accompanied Joseph Banks on his expedition to Iceland in 1772. 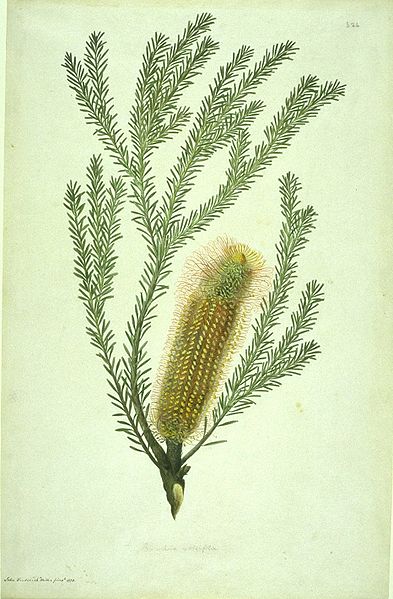 Above: This is a watercolour-on-paper drawing of Banksia ericifolia. The attributed artist is John Frederick Miller, but the work would have been heavily based on a partially coloured drawing by Sydney Parkinson, Sir Joseph Banks' botanical artist who was present when the Banksia genus was first collected at Botany Bay, Australia. Date 1773. The original image is available from the website of the Natural History Museum, London. 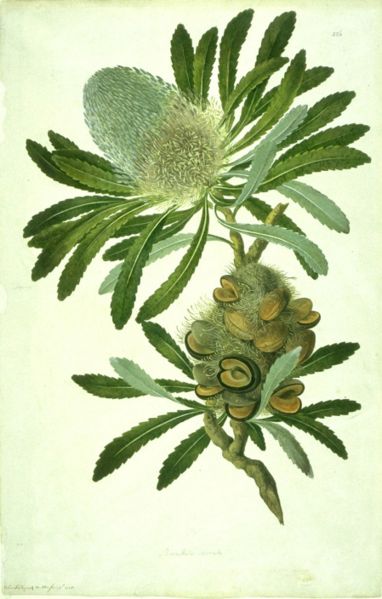 Above:  This is a watercolour-on-paper drawing of Banksia serrata. The attributed artist is John Frederick Miller, but the work would have been heavily based on a partially coloured sketch by Sydney Parkinson, Sir Joseph Banks' botanical artist who was present when the species was first collected at Botany Bay, Australia. Date 1773. The original image is available from the website of the Natural History Museum, London, here. 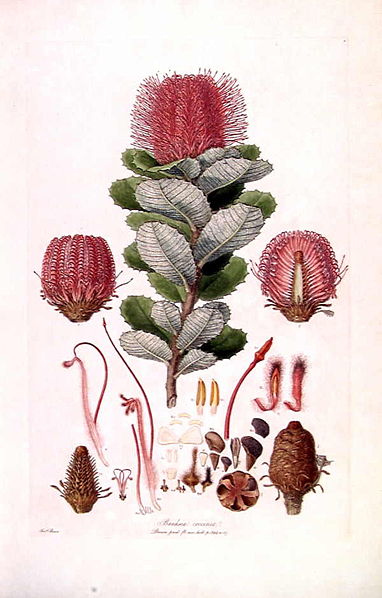 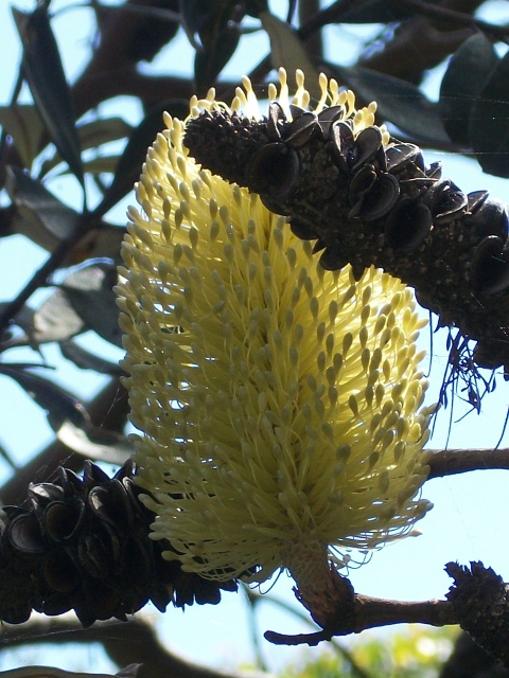 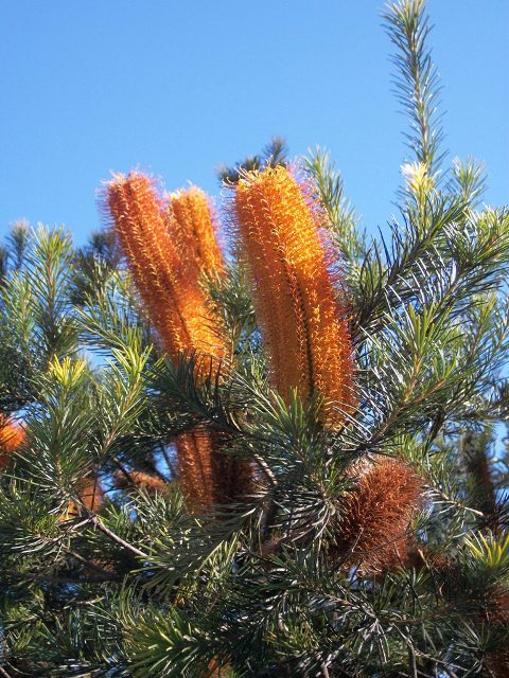 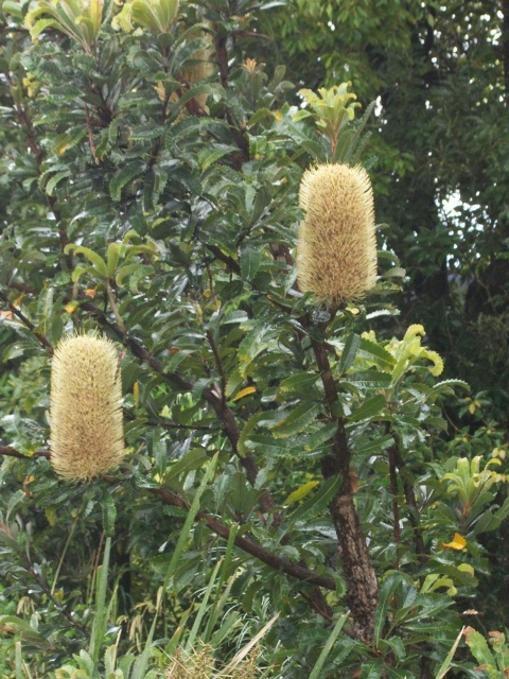 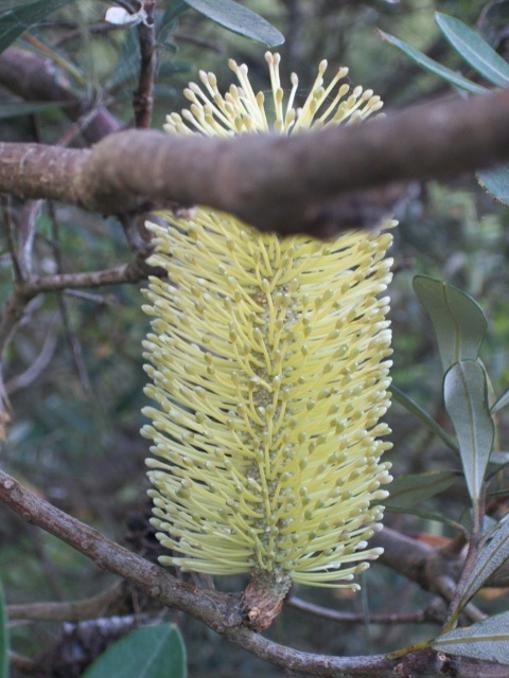 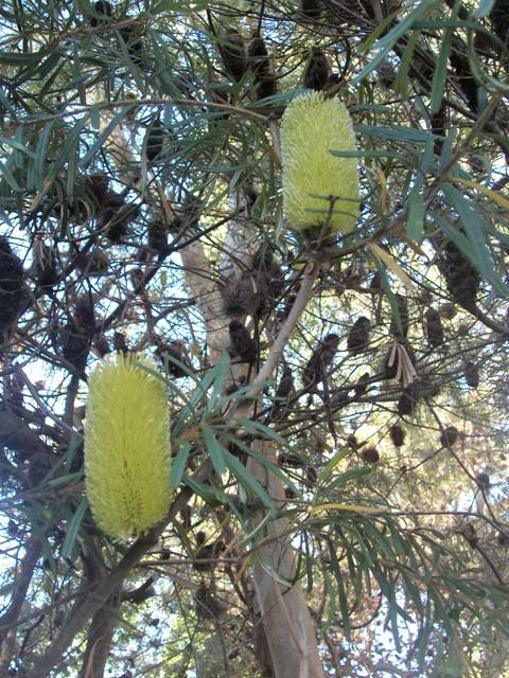 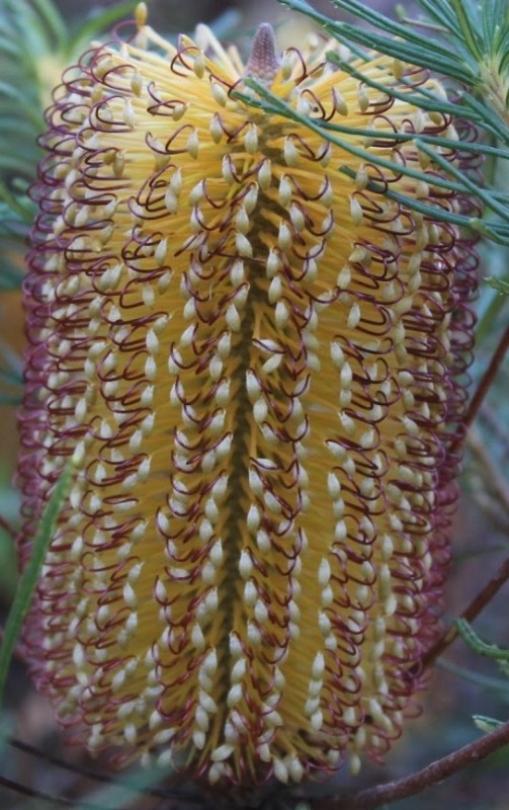 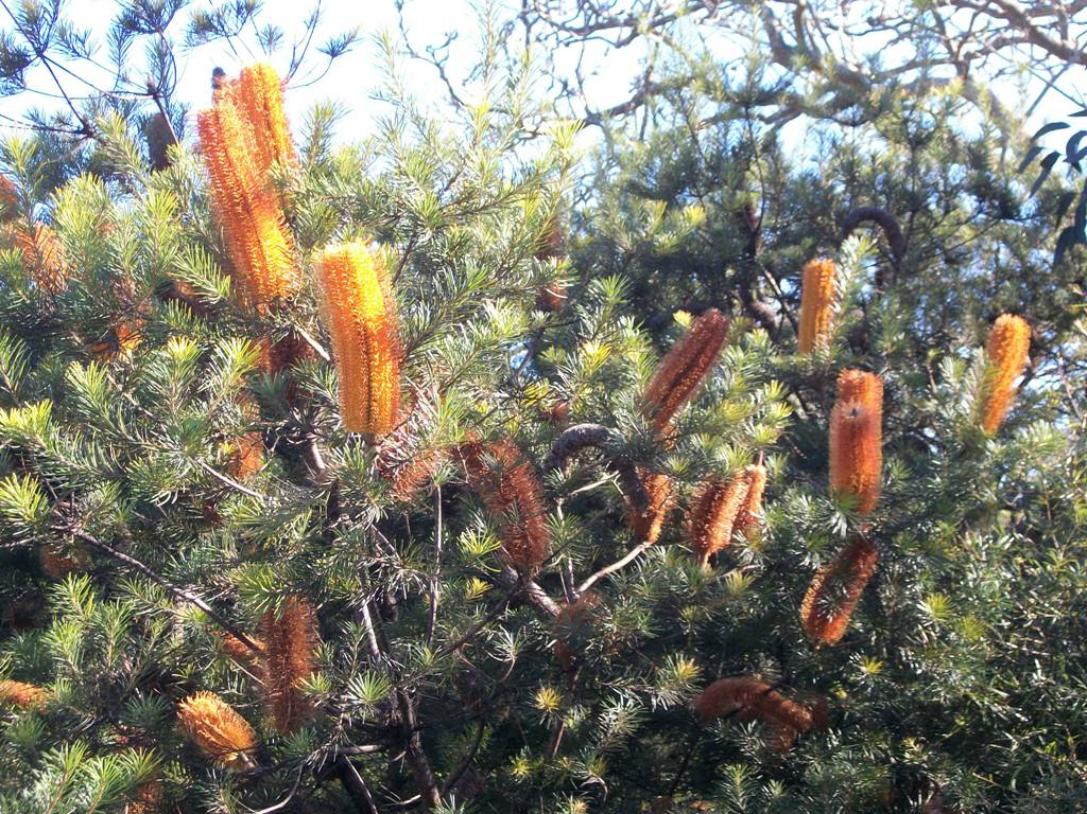