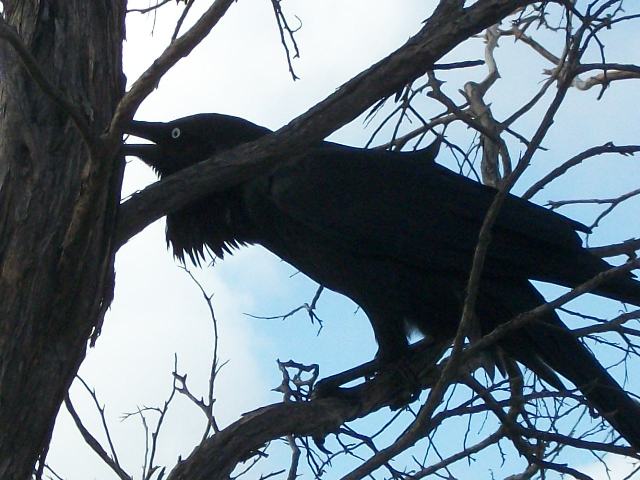 Distinguished from regular crows by its  throat feathers (hackles) which are longer than those of other species, the Australian Raven Corvus coronoides is the largest Australian member of the genus Corvus, ‘Raven’ from Latin, and one of three Australian species commonly known as crows. Crows appear to have evolved in Asia from the corvid stock, which had evolved in Australia. The latest evidence regarding the crow's evolution indicates descent within the Australasian family Corvidae. The Australian Raven was first described by Nicholas Aylward Vigors and Thomas Horsfield in 1827; its specific epithet coronoides "crow-shaped" is derived from the Greek corone/κορονη "crow" and eidos "shape" or "form". The two naturalists regarded the Australian Raven as very similar in appearance to the Carrion Crow (C. corone) of Europe. Although called a raven, its closest affinities lie with the other four species of Australian corvid, which include the Torresian Crow and Little Crow as well as the Forest Raven and Little Raven. It is called wugan and  wogan by the local Eora and Darug inhabitants of the Sydney basin.

Intelligent creatures who will not fly away from humans readily, the Australian Raven measures 46–53 cm in length with a 100 cm (40 in) wingspan and weighing around 650 g, the adult Australian Raven is an all black bird with black feet and beak and a white iris. The plumage is glossy with a blue-purple to blue-green sheen, greenish over the ear coverts. The territorial call of the Australian Raven is a slow, high ah-ah-aaaah with the last note drawn out. This call is used to communicate with other ravens nearby or across the valley as their song carries. 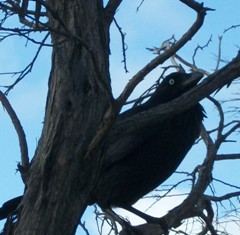 The Australian Raven is common throughout south-eastern Australia, and southern Western Australia (the populations being connected by a narrow strip across the Nullarbor Plain), but it is not found in the far north. Preferred habitats include eucalypt-dominated sclerophyll forest, and farmland adjacent to trees. It is also found in heath and mangroves. Food consists of carrion, insects, seeds, fruit, small reptiles, nestlings and eggs. The preference ratio is 34% carrion, 42% invertebrates and 24% plant material. Food is taken mainly from the ground but will occasionally feed in trees. Ravens have adapted well to eating rubbish and scraps in urban areas, such as school playgrounds. In one study they were observed feeding on nectar from eucalypt flowers.

The Australian Raven’s breeding season is from July to September. They always nest in tall trees and these structures are usually large and untidy, consisting of a bowl or platform of sticks lined with grasses, barks, and feathers. A clutch can comprise 3–6 eggs. Measuring 45x30 mm (1¾x1¼ in), eggs are pale green or bluish-green splotched with darker olive, brown and blackish markings. Incubation of the eggs is done solely by the female over roughly 20 days. Only one brood is raised per year. Fledged by 45 days and staying with parents for about four months after that and look very similar to their parents in colouring even when juveniles apart from having shorter throat hackles.

In Irish mythology, crows are associated with Morrigan, the goddess of war and death. The god Bran the Blessed whose names means 'crow' or 'raven' is associated with corvids and death. Legend has it that his severed head is buried under the Tower of London facing toward France, a possible origin for the keeping of ravens in the Tower, which are said to protect the fortunes of Britain. In Cornish folklore crows and particularly magpies are again associated with death and the 'otherworld', and must always be greeted with respect. The origin of 'counting crows' as augury is British; however the British versions rather count magpies - their black and white pied colouring reflecting the realms of both the living and the dead. The term ‘a murder of crows’ is a phrase some sources state stems from the 15th century, relating to their calls or sinister natures being attributed to them. Others state that people were placed in cages in our dark past to be pecked to death by these creatures. The most reasonable explanation of the term is that it is based on a folk tale that crows form tribunals to judge and punish the bad behaviour of a member of the flock. If the verdict goes against the defendant, that bird is killed (murdered) by the flock and is not touched as carrion. In England, a tombstone is sometimes called a ravenstone. Apart from a murder of crows there is also ‘a parliament of rooks’ and ‘an unkindness of ravens’.  The most recognised ravens may be those of OIdin’s. In Norse mythology, Huginn and Muninn are a pair of ravens that fly all over the world, Midgard, and bring the god Odin information.

In Australian Aboriginal mythology, Crow is a trickster, culture hero and ancestral being. Legends relating to Crow have been observed in various Aboriginal language groups and cultures across Australia; these commonly include stories relating to Crow's role in the theft of fire, the origin of death and the killing of Eagle's son. He takes the sadness from humanity, and flies away with it. The Australian raven's mournful call reflects the burden he carries. From Wikipedia: http://en.wikipedia.org/wiki/Crow

In American Indian cultures the raven represents the polar opposite, being credited with with joy, laughter and a spirit of mischief. Other cultures saw them as messengers to the gods and believed they had prophetic powers. Ravens are associated most with Magick, Shapeshifting, and Initiation, where Crow is a messenger of Divine Law and Language.

Australian Raven. (2012, May 28). In Wikipedia, The Free Encyclopedia. Retrieved from http://en.wikipedia.org/w/index.php?title=Australian_Raven&oldid=494788627

Phylogeny and diversification of the largest avian radiation - Barker et al., 10.1073/pnas.0401892101 - Proceedings of the National Academy of Sciences". Pnas.org.