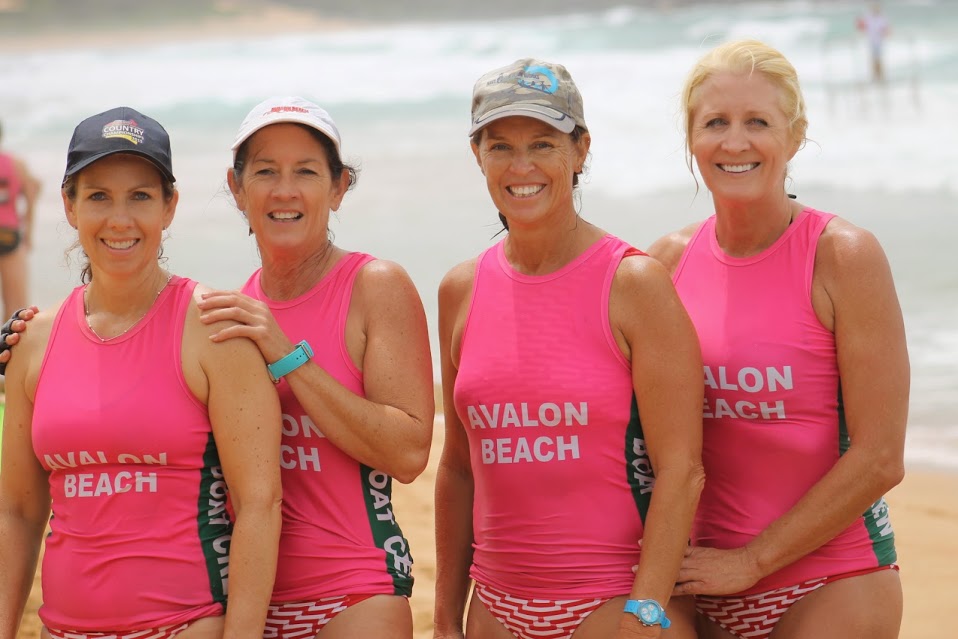 A little north of Avalon is Palm Beach SLSC who were 26th overall after the Masters competitions at this year’s Aussies. The Masters tally:

Members who also competed and cheered when not in or on the water and sand were Sarah Webster, Andrew Webster and Tony Way. We thank Gordon Lang, Masters Captain at Palm Beach SLSC for forwarding this great news.

Two times Gold lady Fi Rae is Project Manager for the new restaurant slated to open in Avalon Beach SLSC’s clubhouse around mid June and has agreed to letting us run a Profile of the Week on her in late May – more on that dynamic lady soon!

Whale Beach SLSC’s Master in the swim, Bill Phillips won silver in the 70 yrs and Over Rescue Tube Race and bronze in the 70 Yrs Over Surf Race.

Bilgola SLSC competed in the Surf Boat races, with the wonderful Don McManus sweeping - Don has only ever missed two Aussies!

Newport SLSC has always been strong in surf sports and has become more so since launching the Kinghorn Surf Racing Academy. With great examples like their Masters Relay Team of with Ted Smithies, Martin Lynch, Rob Emerson and Brett Budd winning gold in the 230 years beach relay and Lise Layard and Jan Proudfoot who also took gold in double ski, Ted Smithies winning the 60-64 years beach sprint, and club mate Marty Lynch securing silver, and backed up by parents and coaches who support their striving to ‘be the best and enjoy it the most’ it’s no surprise that all that hard work is producing the results strived for.

The Newport under 19 girls Sam Wilcox, Lara Moses and Georgia Miller picked up two bronze medals in both the Taplin Relay and board relay at the Aussies, and Jackson Borg has taken bronze in the under 17 Champion Life Saver. Newport member Kristie Edwards is now Australian u15 Beach Sprint Champion and Australian Champion U15 Flags thanks to her great efforts earlier in the week.

On Friday the Under 17 board relay gold medal was won by Guy Rees, Charlie Brooks and Jackson Borg who then went on Saturday to secure gold in the prestigious Taplin Relay from Kurrawa. This makes the third gold for Charlie and Jackson at this year’s National titles and the second gold for Guy.

Yesterday, Saturday April 18th, Newport’s  B team won the under 19 Taplin Relay final. The decision to promote Charlie Brooks from the under 17s proved to be a great idea when ski paddler David Euers led them home to a convincing win.

“We grabbed Charlie from the under 17s because he is paddling really well at the moment,’’ David said. “He smashed it and we couldn’t have asked for a better lead after the board leg. Then Ollie [Signorini] took over in the swim and held the lead and swam all the way in and tagged me.

‘’It was then up to me. A lot of pressure but I was just so glad to hold my lead. I know we were the B team but we wanted to get the guys in the A team. We knew we’d be up there.’’

‘’It’s absolutely incredible. I wouldn’t have thought in my wildest dreams that would have panned out that way,’’ she said after running across the line ahead of Courtney Hancock and Rebecca Creedy.

“I am just so thrilled. I think I was pretty young an naive when I won it the first time [also .at North Kirra] and didn’t really know what it meant to win an open surf race. I think coming through and racing all the open girls more has definitely put it into perspective.

Georgia said she was just sitting in behind Courtney and Miranda Bell around the cans.

‘’On the way in I just got some good runners and ended up getting a wave and held it all the way to the gutter and then I just sprinted my heart out coming in as I didn’t know if anyone had caught the wave.’’

Soon after the surf race Georgia was back in the water with her partner Lara Moses for the under 19 final rescue final – and that brought home gold too.

Picture: Georgia being interviewed by Josh Minogue after the open surf race final.

The 2015 Aussies conclude today, April 19th – good luck to all those still at Kirra! 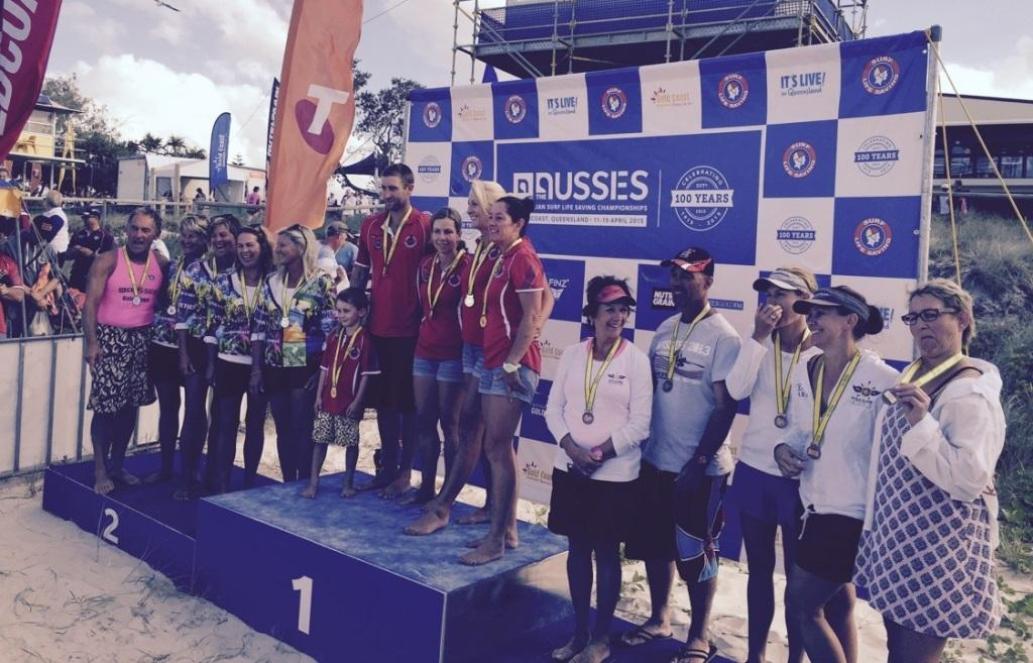 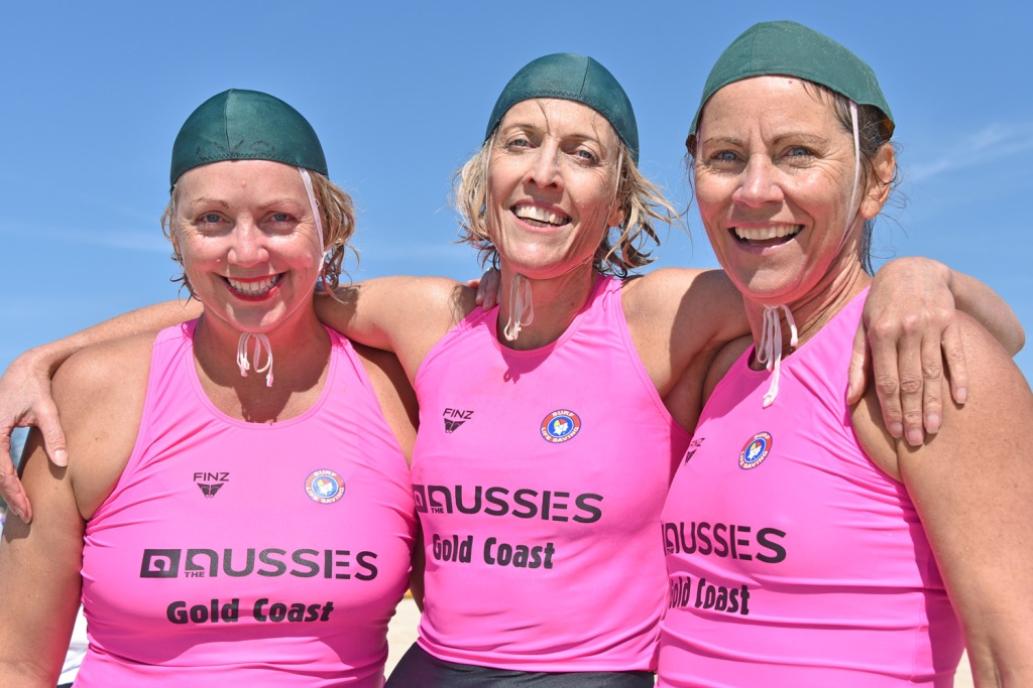 *The Gallipoli 100 Organisation is commemorating the 100th anniversary of the landing on Gallipoli by the ANZACs with a long row featuring surfboats manned by Australian, New Zealand and Turkish crews. This will be held on 21 and 22 April 2015 starting at Eceabat on the Dardanelles then head south to Morto Bay, a landing spot for the French soldiers.

On Day Two the crews row closely past V beach where the British first came ashore when they rammed the Steamer the River Clyde up onto the beach disgorging its soldiers directly onto the beach to be met by ferocious resistance from three Turkish Machine Guns. They will continue past Lancashire Landing where again the allied forces were met by heavy resistance. Next is Y beach where more of the allied forces landed including our ANZACs.

Particpants will see Fusiliers Bluff and row past the highly concentrated landing areas of ANZAC Cove, North beach and finally the vicinity of Fisherman's Hut where most of our men never made it past the beach on that first day. The boats and crews will then turn back to Gaba Tepe Wharf, this will give second crews to pass ANZAC Cove.

The Gallipoli 100 Organisation is composed of a group of passionate surfers who also share an interest in military history and have experience in managing surfing events and overseas tours.

The initial team is made up of Paul Murphy's company, Military History Tours, all information on it is at the website at www.militaryhistorytours.com.au. Representing the G100, Paul visited Turkey in February 2009, and found nothing but enthusiasm for the G100 concept. The other side of the team is Dr Paul Cooper, boat captain at Tamarama SLSC in Sydney who together with Mark Walton, ex Duntroon Graduate and recently retired from full time army service, and also a Tamarama boatie, came up with the G100 concept.