Whale Beach Surf Life Saving Club is fortunate to have a history of dedicated people who, in their own special way, have contributed to the growth and ideals of the Club and its service to the beach-going community. This heritage will surely be carried forward by future generations of young Australians as members of this special Club.

The stories of surf life saving at Whale Beach runs as the August 2022 Artist of the Month feature and is available now in the WBSLSC online site here. 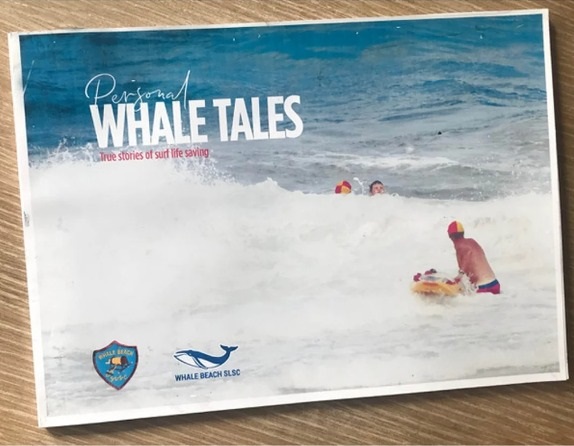 This book is dedicated to the young men and women who have become members of Whale Beach SLSC since its foundation in 1937. It is a record of their determination and dedication to community service through becoming a trained lifesaver. Many risked their lives and serious injury in undertaking the rescue of beach visitors in danger in the surf. These stories share many of these incidents in which lives were saved.

Personal Whale Tales - True stories of surf life saving, is a testament to the selflessness and courage of those volunteer lifesavers.

Rob Berry, who has organised the work, says;

''Thank you to the members who have put forward stories, and to the many others who have helped in reserach, provided photographs, and for your encouragement with this Personal Whale Tales book project.

These stories are based on the personal recollections of the lifesavers involved, documents from Whale Beach SLSC archives and newspaper clippings.''

The book is divided into three themes: Rescues, Happenings and History, and dates from 1937 records right through 2021.

This month we share three insights from the large body of works contained in Personal Whale Tales - True stories of surf life saving, that are interrelated and centred in the one family that were always on the beach - the Hendriksons who owned and ran The Whale Beach Kiosk over three generations.

Whale Beach Kiosk was purchased by an enterprising man from Estonia, Alex Hendrikson at the end of WWII. With his wife Freda, Alex built a good business as the number of people visiting and living at Whale Beach grew. He was able to extend the premises to offer  both a tea room and a beer garden with a barbecue.
Alex started a tradition of putting on a spit roast to celebrate Australia Day. He is fondly remembered for attending over many seasons, the AGM of the Club and addressing the members in his heavily accented English, with words of praise for the good life in Australia and the opportunity young people have in this ‘great country’.
In 1952, an event to raise funds to build a clubhouse was held in the beer garden and raised what was in those times, the substantial amount of £400.

The Hendrikson’s had three sons, Michael, Chris and Adrian. They joined the surf lifesaving club and were strong competitors in the surf events  and in surf boat crews. Chris went on to be Club President from 1980-1986 and was later elected as a Life Member. His son Aaron Hendrikson became a Club Captain and was a professional Lifeguard for a number of seasons.
Alex passed away in 1978. His son Chris with wife Jan then took over the ‘kiosk’ until it was sold to a developer in 1989.
Chris has continued his father’s tradition of celebrating Australia Day with a spit-roast lamb and community party.
The kiosk and what was the Hendrikson family dwelling were sold in 2019 and have now been demolished to make way for luxury dwellings.
The photo is the Whale Beach Kiosk and beer garden in 1948. From Henrikson Family Albums.
More in:

It was early afternoon with a strong northerly blowing. There was a medium to large swell on a falling tide with a gnarly surf. As later noted in the Incident Report by Number 9 Patrol Captain, Bryan Webster, ‘ We got a call that two sailboarders were in difficulty near the southern headland. With Phil driving and Chris as crew, our IRB headed out to help.‘

Taking up the story, Phil Cullis describes the incident; “On reaching the first sailboarder, he said that we should help his friend who was further out to sea. We found the second bloke a good distance, way between Whaley and Avalon.

While starting to get him and his sailboard on the IRB, we got a radio call from Bryan about a fisherman washed off that southern point. We gave the sailboarder the choice to leave his board and come with us or stay there until we could get back. He chose to stay.” said Phil.

Meanwhile, a man from a house above the rescue area had climbed down to the lowest point of the cliff and offered to throw his surfboard down to the fisherman’s mate who said ‘I can’t swim!’

How often have rescuers heard this from rock fishermen?

Phil’s recall continues, “We raced back to the southern point and Chris jumped in to support the fisherman and swim him away from the rocks. I brought the boat close in and we got him into the boat. He was in a fairly poor state, lapsing in and out of consciousness. We got him back to the beach and left him in the experienced hands of our beach patrol. We then went back out to look for the sailboarder.  He was a bit difficult to find because he had now been blown further out to sea and further south. Chris finally spotted him and we managed to bring him and his board back to the beach.  The other sailboarder had already made it to the beach.”

The Branch Duty Officer reported how impressed he was with the Patrol efficiency in keeping in communications through the changing priorities of sailboarders and fisherman rescues in difficult conditions and advising the Branch, calling for ambulance and setting up a helicopter landing area.

Phil and Chris were highly acclaimed for their selflessness and aptitude when faced with the situation,  and particular praise for Chris in diving into the extremely rough surf surging against the rocks.

Their bravery and the teamwork of the whole patrol was recognised with the first SLSA ‘Hero-of the-Surf’ Award and the Whale Beach SLSC awarded a fully equipped IRB which was  named ‘The Green Truck.’ (Which is another great story of club life at Whaley).

A sequel to this rescue is the following weekend Mr Lee (the fisherman) arrived at the beach with a box of mangoes to express his gratitude, only to be bitten on the leg by Jamie Macnab’s dog.  There he was shuffling across the car park carrying a box of mangoes with one leg dragging Jamie’s dog.

FOOTNOTE: At the time of this rescue in 1989, Bryan Webster, Phil Cullis and Chris Hendrickson were veteran lifesavers at 46, 46 and 47 years old and continued doing Patrols for over another decade.

How come a bright red IRB was named ‘The Green Truck’ ?

That is quite a story as Chris Hendrickson relates:

“Back in the early 60’s, our family had the Whale Beach Kiosk on the beachfront, owned and run by my Dad Alex and Mum Jan. I lived in the house there with my brothers Michael and Adrian and sister Lyn.  Naturally, I had joined Whale Beach Life Saving Club, when I was just 14.

There were half-a-dozen of us cadet lifesavers at that time and we became very close buddies over the years, becoming Juniors at 16, got our Bronzes, did patrol and got into competition on boards and the surf boat.

That is when the real Green Truck came to be at Whaley.

In 1962, brother Michael was 18 and got his heavy ridged truck driving licence (Class 3). A Chevrolet Ambulance Truck from the war years was obtained at an Army Auction.

It was in the standard army olive green colour. The body that had been specially built flared out from the front wind screen to a full maximum legal width at the back of the seat, eight feet (2.4mtr). You could seat three people across the front seat quite comfortably as well as jamming another two each side against the doors if you wanted to. It was modified in the back like a camper van as the old man took us out to Lightning Ridge. I’m fairly sure that we only used the truck for camping that once and a half trip in and then it was just dumped at the back of the house.

The rig weighed in at about two and a half tons and a truck licence was needed for any vehicle that weighed more than two. This was a problem when I wanted a vehicle to drive, particularly for away Surf Carnivals. The truck was up for rego and we decided to try to get the truck under two tons. Thanks to brother Michael and his mate, everything that could be was stripped; the inside dual wheels, all shock absorbers, the inside back stripped whatever we could safety remove. With only two gallons of petrol in the tank, we got it to the legal weighbridge and scraped in under the weight limit. I paid the fees paid and the truck was registered under two tons, which was cheaper as well. I very happily also to pay for a lot more than one beer each for Michael and his mate at the ’Arms’ on the way back to Whale Beach.

We never told the old man what we had done except that it was all ok for me to legally drive the truck. It was used a lot to travel many times to away Surf Carnivals and 6 or so lifesavers that travelled in the back together with a surf reel and boards and march past gear. It was great fun.

The Green Truck did great service for a number of seasons but time and the salt air finally got to the Chevy and it was scrapped. Over the following seasons, our original group of Juniors stayed together as a patrol. There was Webbie, Phil Cullis, Dave Bracey, John Fielder, Terry Collier and Smiley Blundell. All still Whaley members as I write this.

In 1980, we did a major rescue for which we were awarded the SLSA  ‘Hero-of-the-Surf’ Award and with it came a brand new IRB for the Club. So what name should we christen it with? It had to be, ‘The Green Truck”. 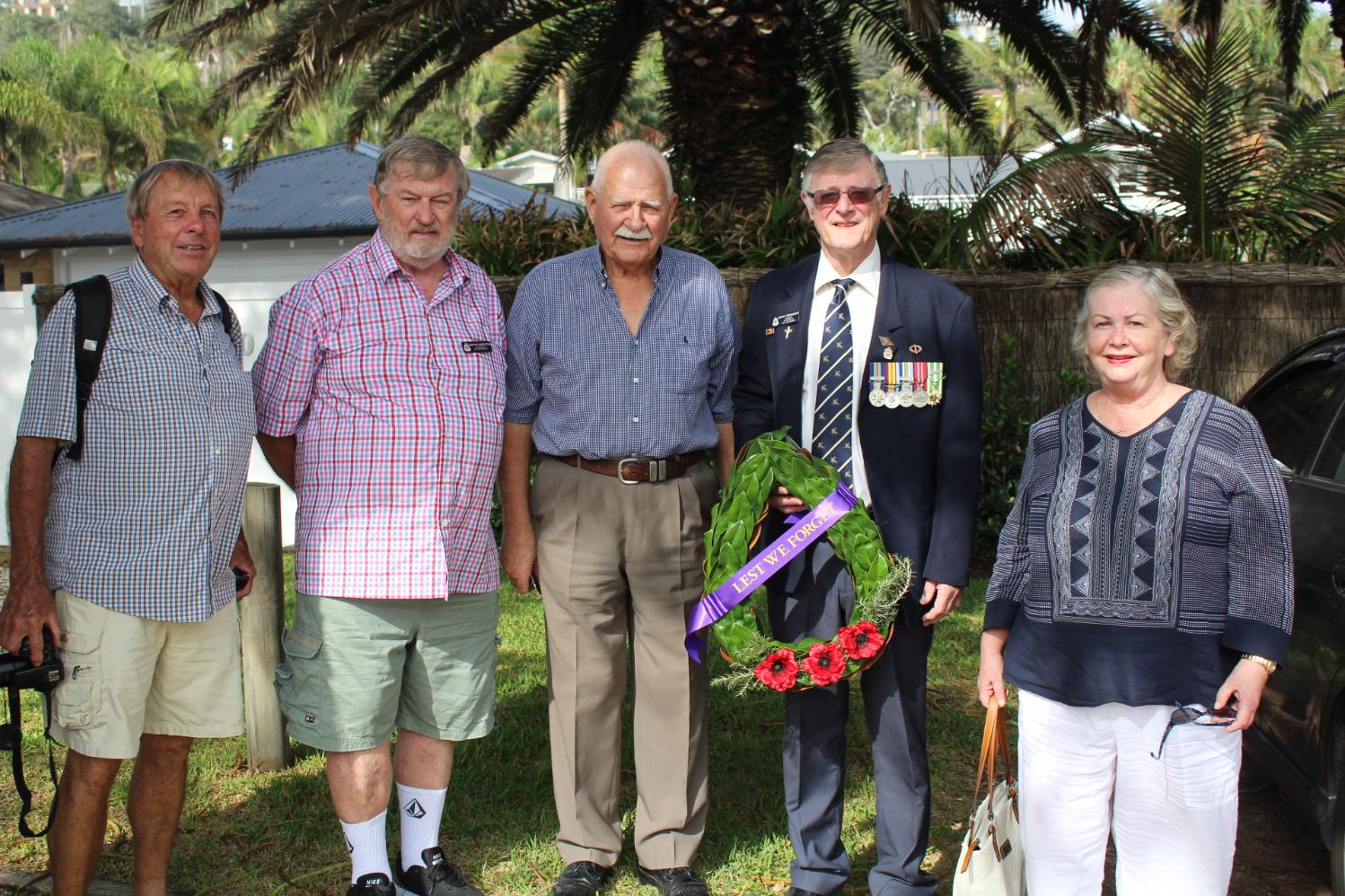