Australian stone fruits are some of the sweetest and juiciest worldwide and are currently in season. Mid January brings the apricot crop to shops in Australia and with an asking price of less then $3.00 a kilo this week, they’re not as pricey as they can be when out of season.

High in Vitamins A and C content, important for growth and development, and for the maintenance of the immune system and good vision in the case of Vitamin A, as well as Niacin which supports the energy required by the brain and digestive system, contributes to DNA repair and even is said to decrease the risk of cardiovascular disease in those already on a statin, these fruits are for Summer and all that comes with it.

Being in season, and cheap, if a case or two can be bought, it may be worthwhile making the chutney recipe here to add special touches to a few Summer dishes or to store them away for Winter when you want that taste of Summer without having to fly to the northern Hemisphere by simply stewing and freezing. If you want something fresh for right now, a few salad ideas may come in handy:

1. Preheat oven to 180°.
2. Combine first 3 ingredients in a roasting pan, and drizzle with 2 tablespoons oil, shaking pan to coat beans. Roast at 1800° for 20 minutes, stirring once.
3. Combine remaining 2 tablespoons oil, rind, vinegar, juice, salt, and pepper in a large bowl, stirring with a whisk. Stir in onion and apricots, tossing gently to coat. Add warm beans and arugula, tossing to combine. Sprinkle with cheese.

APRICOT FRITTERS.
These are delicious for tea when school friends are expected. You will want :-One egg,- lb. flour, one breakfast cupful milk, some dried apricots. The apricots must be prepared a day before they are required. Place them in a small basin, with a little sugar, pour some boiling water over them, and cover with a plate. To make the batter put the flour into a basin, make a hole in the centre of the flour, and break the egg into it. Beat the egg, and the flour will become gradually absorbed into it. Then add the milk. Drop the apricots one at a time into the batter, and when they are well coated with it, fry in plenty, off at until they are a golden brown. Lift out of the pan on a fish slice and pile on a plate. Sprinkle liberally with sugar, and serve at once. APRICOT FRITTERS. (1934, April 3). Western Argus(Kalgoorlie, WA : 1916 - 1938), p. 11. Retrieved from http://nla.gov.au/nla.news-article34631962

Apricot Marmalade.
Peel, quarter, and stone 4lb of ripe apricots. Put them, into a preserving-pan without either water or sugar. Let them boil gently, stirring continually, until the fruit is reduced to a pulp. Then add 3lb of sugar and a few kernels blanched and halved; and boil once more. Put into jars, cover the fruit with an oiled paper, and fasten over each jar a piece of thin paper dapped in gum water. Apricot Marmalade. (1890, February 3). Evening News (Sydney, NSW : 1869 - 1931), p. 7. Retrieved from http://nla.gov.au/nla.news-article108804064


Some History and Extras 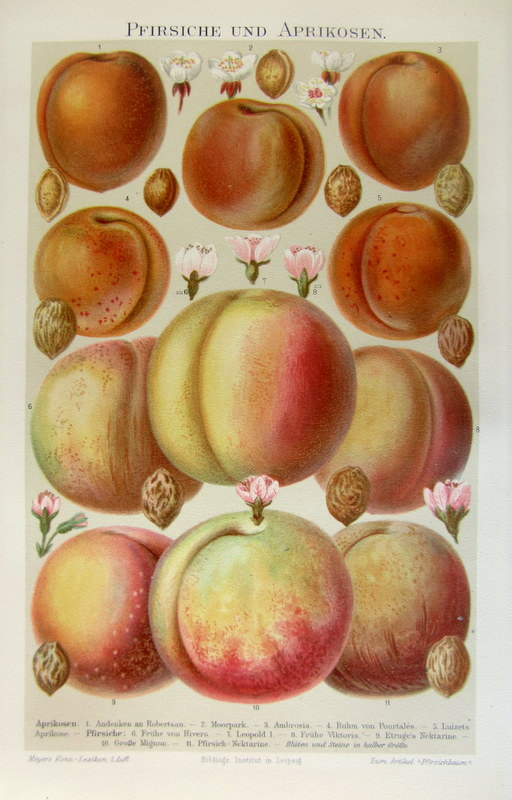 The origin of the apricot is disputed. It was known in Armenia during ancient times, and has been cultivated there for so long, it is often thought to have originated there although other sources cite China as the place of origin for this luscious fruit. Its scientific name Prunus armeniaca (Armenian plum) derives from that assumption. For example, the Belgian arborist baron de Poerderlé, writing in the 1770s, asserted, "Cet arbre tire son nom de l'Arménie, province d'Asie, d'où il est originaire et d'où il fut porté en Europe ..." ("this tree takes its name from Armenia, province of Asia, where it is native, and whence it was brought to Europe ...") An archaeological excavation at Garni in Armenia found apricot seeds in an Eneolithic-era site. Despite the great number of varieties of apricots that are grown in Armenia today (about 50), according to the Soviet botanist Nikolai Vavilov its center of origin would be the Chinese region, where the domestication of apricot would have taken place. Other sources say that the apricot was first cultivated in India in about 3000 BC.

Its introduction to Greece is attributed to Alexander the Great; later, the Roman General Lucullus (106–57 BC) also would have imported some trees – the cherry, white heart cherry, and apricot – from Armenia to Rome. Subsequent sources were often confused about the origin of the species. John Claudius Loudon (1838) believed it had a wide native range including Armenia, the Caucasus, the Himalayas, China, and Japan.

Apricots have been cultivated in Persia since antiquity, and dried ones were an important commodity on Persian trade routes. Apricots remain an important fruit in modern-day Iran, where they are known under the common name of zard-ālū (Persian:زردآلو).

Egyptians usually dry apricots, add sweetener, and then use them to make a drink called amar al-dīn. In the 17th century, English settlers brought the apricot to the English colonies in the New World. Most of modern American production of apricots comes from the seedlings carried to the west coast by Spanish missionaries. Many apricots are also cultivated in Australia, particularly South Australia, where they are commonly grown in the region known as the Riverland and round the small town of Mypolonga in the Lower Murray region of the state. In states other than South Australia, apricots are still grown, particularly in Tasmania and western Victoria and southwest New South Wales.

The scientific name armeniaca was first used by Gaspard Bauhin in his Pinax Theatri Botanici (page 442), referring to the species as Mala armeniaca "Armenian apple". It is sometimes stated that this came from Pliny the Elder, but it was not used by Pliny. Linnaeus took up Bauhin's epithet in the first edition of his Species Plantarum in 1753.  The name apricot is probably derived from a tree mentioned as praecocia by Pliny. Pliny says "We give the name of apples (mala) ... to peaches (persica) and pomegranates (granata) ..." Later in the same section he states "The Asiatic peach ripens at the end of autumn, though an early variety (praecocia) ripens in summer – these were discovered within the last thirty years ...".

The Chinese associate the apricot with education and medicine. For instance, the classical word 杏壇 (literally: "apricot altar") which means "educational circle", is still widely used in written language. Chuang Tzu, a Chinese philosopher in 4th century BCE, told a story that Confucius taught his students in a forum surrounded by the wood of apricot trees. The association with medicine in turn comes from the common use of apricot kernels as a component in traditional Chinese medicine, and from the story of Dong Feng (董奉), a physician during the Three Kingdoms period, who required no payment from his patients except that they plant apricot trees in his orchard on recovering from their illnesses, resulting in a large grove of apricot trees and a steady supply of medicinal ingredients. The term "Expert of the Apricot Grove"  is still used as a poetic reference to physicians.

The Turkish idiom "bundan iyisi Şam'da kayısı" (literally, the only thing better than this is an apricot in Damascus) means "it doesn't get any better than this". It is used when something is the very best it can be, like a delicious apricot from Damascus.
Apricot. (2015, January 13). In Wikipedia, The Free Encyclopedia. Retrieved from http://en.wikipedia.org/w/index.php?title=Apricot&oldid=642341477

To be LET or SOLD, And entered on at Pleasure, A VALUABLE FARM, containing Two Hundred and Ten Acres on Grant from the Crown, 120 by Lieut. Governor GROSE  and 90 by Governor HUNTER, both the Allotments joining, and pleasantly and desirably      situate within 3 miles of Sydney; 80 Acres  are cleared, 3 of which are laid out in a Vineyard; a handsome Orchard, containing upwards of 100 Apple-trees, and a number of very fine Plumb-trees in bearing, peaches  Apricots and other Fruit-trees; The Garden, contains 1 acre and 36 Rods well laid out,    with convenient Poultry and Stock Yards, &c .&c. &c. The premises may be viewed, and every  necessary information had by applying to Mr. N. DEVINE
ALSO a LEASE of Eight Acres known by the Name of the GOVERNOR's OLD  FARM bounded by Mr. Palmer's Windmill.
The whole may be Rented for a Term of Years, or Purchased at pleasure of the Applicant.  Classified Advertising. (1804, January 1). The Sydney Gazette and New South Wales Advertiser (NSW : 1803 - 1842), p. 4. Retrieved from http://nla.gov.au/nla.news-article625960

" THE LATE REGATTA ON THE DERWENT. -- in our two last Gazettes we had occasion to record the triumph of the Naval Officer, E. F. Bromley, Esq. over Captain Watson, of the Aguilar. In a third contest, which took place on the 22d ult. the boatmen of the Aguilar beat their competitors hollow."
_____________________________
The extent and diversity of the Australian horticulture is not so generally known as might be wished. To shew to what a state of perfection our gardens are arriving, we take the opportunity of enumerating, amongst the multiplicity of productions, the following plants. They are kindly handed to us by one of the most proficient horticulturists of the day:- The Lisbon, Seville, Mandarin, China, and Brazil orange. The Lisbon and common lemon. Small round and large oval  citrons. Limes. Brazil and Java shaddocks. Of  apples, pears, peaches, nectarines, apricots, cherries, and plums, many varieties are cultivated.  The vine is chiefly cultured for the table;    but so many kinds have been lately introduced,  that it may reasonably be conjectured employ will soon be obtained for the wine-press. The quinces are of two kinds, viz. the common or Austrian; and the clustered flowered or Japanese; the former bear in great abundance. The walnut, sweet chesnut, and medlar have already borne; and the filbert and alder are coming forward. The black Italian, Tartarian, white or Chinese, and Cape mulberry, bear in vast profusion. -Gooseberries and strawberries are abundant and general. The Maspilus japonica, or loquette, with various kinds of figs, yield excellent crops; and the pomegranate seldom fails. In the vicinity of Port Jackson, the banana, guava, and rose apple, have perfected in considerable quantities ; and the great flowering passion flower, or granadilla of the East Indies, has evinced symptoms of bearing. The date palm (phoenix dactylifera) has long been introduced, and grows luxuriantly, but can-not be expected to yield fruit for some years. The olive, of which we have at least 4 species, promises all that can be required. The tea (Thea Bohea), custard apple, and alligator pear, are now brought to bear without any injury. The melon and cucumber are in great quantities, and cause but small trouble. The pine apple can be propagated in the open air ; but to obtain its natural sweetness or flavour, artificial heat is necessary.
Independent, of the above list, the following plants have recently been introduced, and promise to add greatly to our extensive list of fruits ;viz. the anona cheramolia, or cheramolia of Chili. The gromuchuma, or gooseberry of Brazil. Artocarpus integrifolia, or jac fruit. The Celeta, Tangarine, and Bahia orange. Sweet lemons and Persian limes. Cucumis anguria, or chew chew.
Such is the decided peculiarity of our climate, that while on the coast can be cultivated the major parts of the tropical fruits with considerable certainty and success, we can also produce all those of Europe in the interior. MAGISTRATE FOR THE ENSUING WEEK, [?] [?] ESQUIRE. (1824, April 22). The Sydney Gazette and New South Wales Advertiser (NSW : 1803 - 1842), p. 2. Retrieved fromhttp://nla.gov.au/nla.news-article2182832