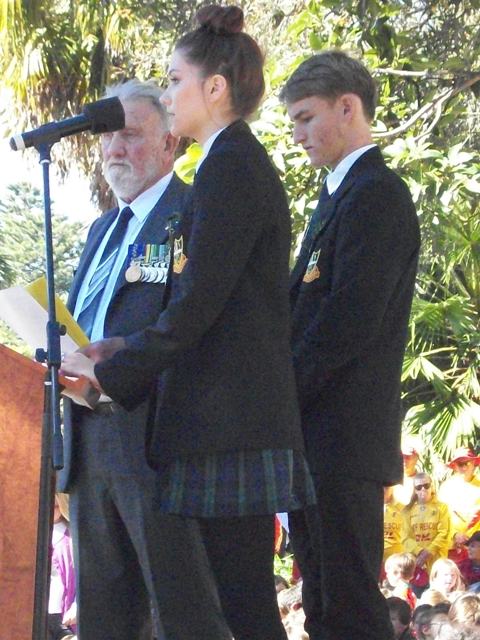 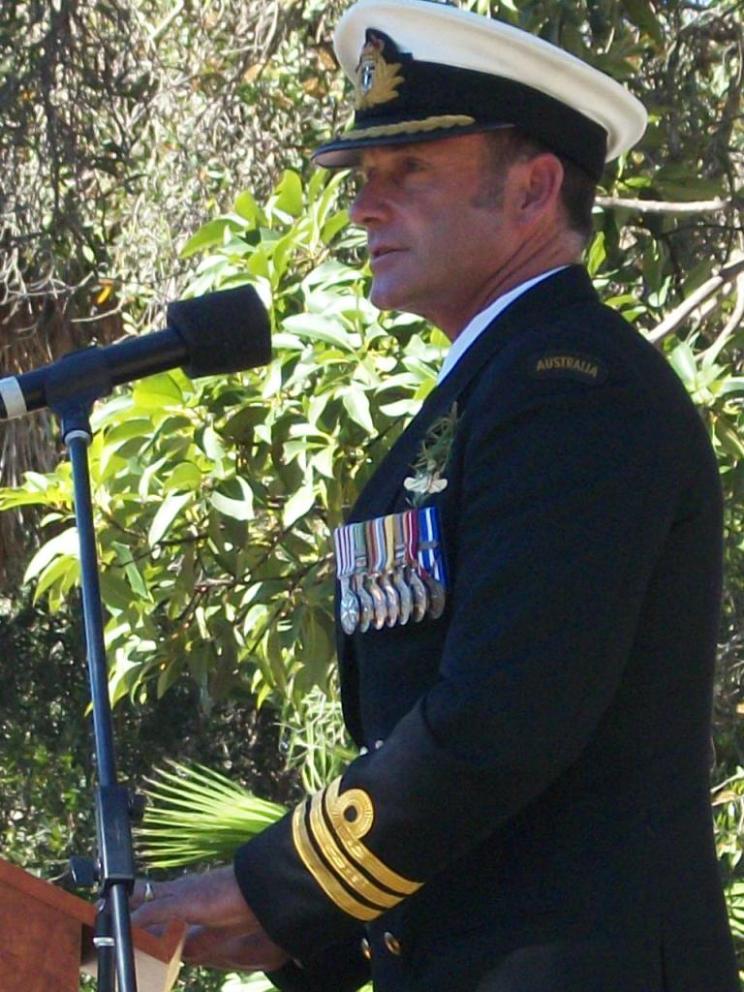 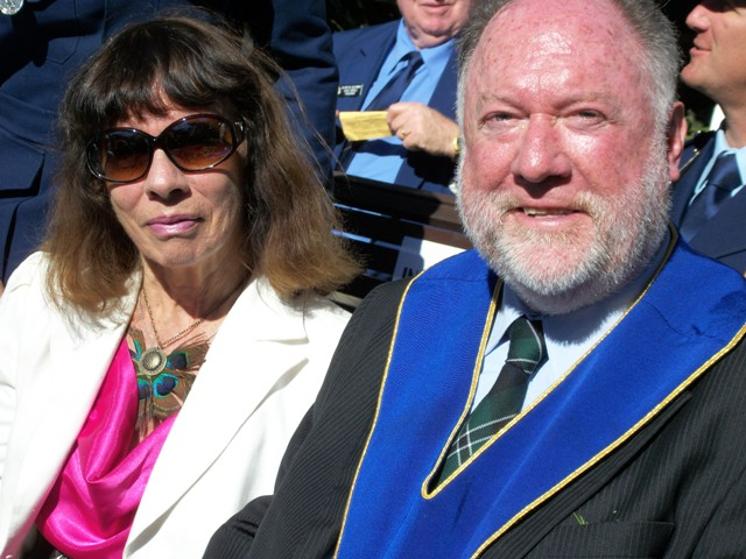 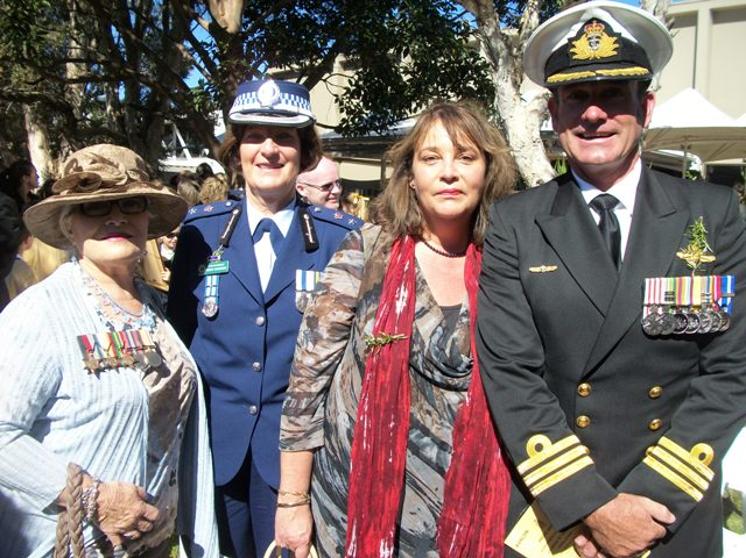 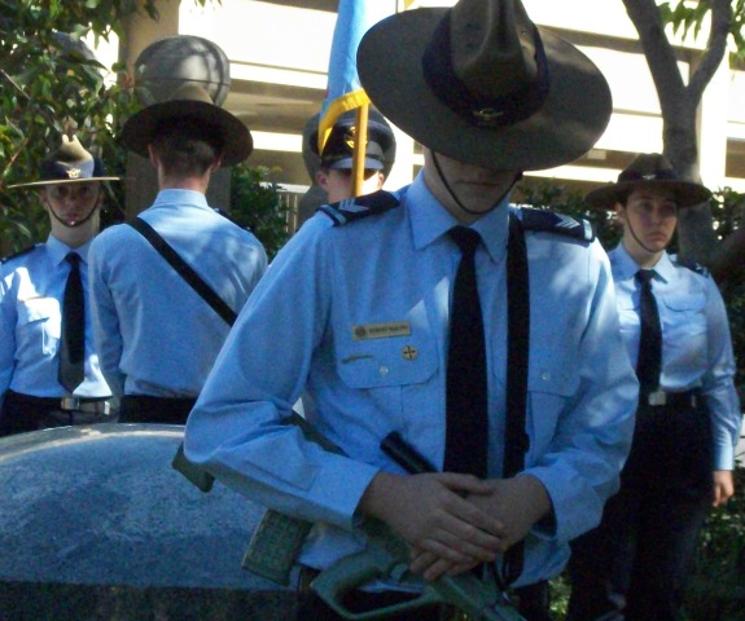 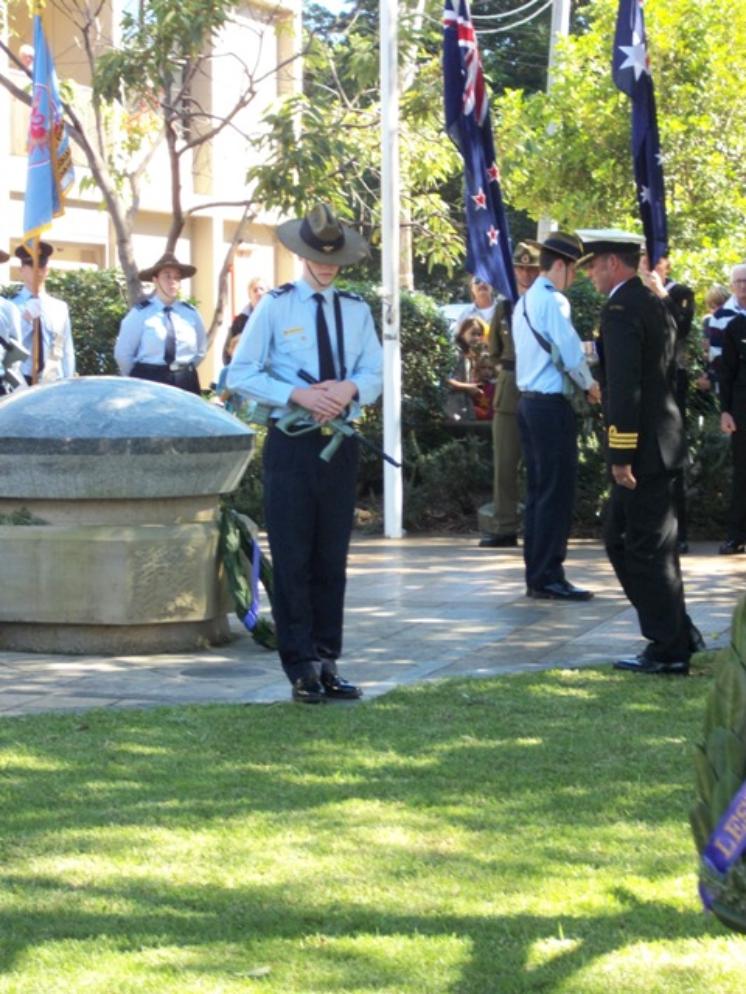 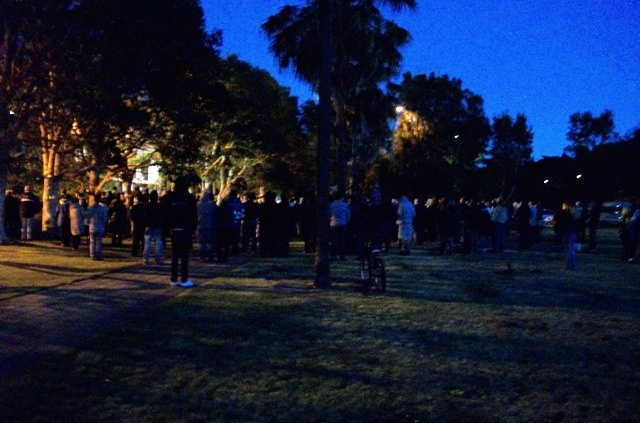 Thousands turned out to the Dawn Services at Avalon and Pittwater RSL’s on Wednesday morning and thousands more attended the 11am Anzac Day March and Commemorative Services at Avalon, Church Point, Palm Beach. There is still a haunting quality in the voice of any veteran who is kind enough to share a few words on their experience, still tears in the voices of the widows who lost husbands and mothers and siblings who have lost daughters, sons, uncles and brothers. This is being heard by each succeeding generation and leaves in them the same sense of silence that comes when all the battle noise has gone and the space these people filled in many lives is left empty. The appreciation of those who seek to keep the peace now and those who fought to keep all free has grown.

At Avalon’s March this year, one of the biggest outside of the city centre, representatives from every school, Avalon Public, Bilgola, Mater Maria, Barrenjoey High School, from the Avalon SLSC and Avalon Bulldogs football club in nippers and under 7’s and up to adults all joined veterans in the parade. 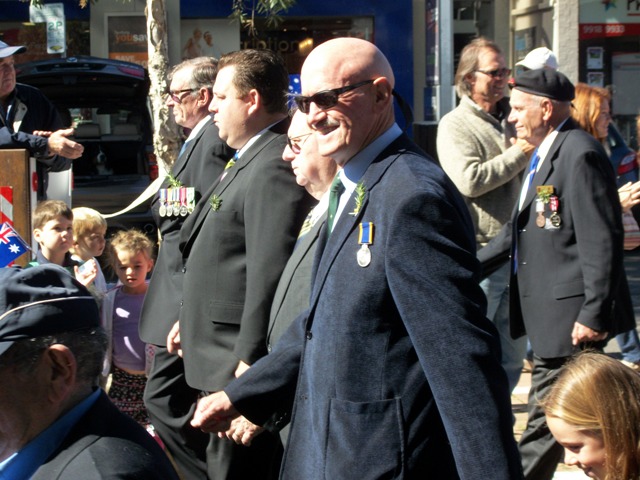 Every Anzac Day we are reclaiming a common ground by wanting to know the paces and even march in the stead for those now gone. All who stand cheering, or simply stand by to give thanks, utter our determination to honour, to respect, to remember and remember most that every soul who has served or serves springs first from the Australian community and belongs to and is at home there.

By mid-afternoon we are still eager to show the other side of the Australian face as veterans rub elbows with those just coming of age in the game of two-up. The smiles return then, the laughter and belief that life is an adventure and meant to be lived. After the silence we are still determined to honour them with life, with living. To hope they who are gone are at our elbows too, smiling, laughing.

The Services at Avalon this year, at dawn and at eleven am, were conducted by Commodore(Rtd.) Graham Sloper, President of Avalon Beach RSL Sub Branch. The Avalon RSL Sub Branch has 233 Members from 12 different nationalities. It too shows the broad spectrum of our community.

As has been the practice for a few years now, books that were nominated by local schools, and shall form part of their libraries, were laid instead of wreaths at the cenotaph. The prayers were given by Barrenjoey High School Captains Elinda Hartin and Braydon Witham. Barrenjoey High School Band conducted by Patrick Brennan, also provided the music while vocalists Jess Harris, Joy Yates and Lana Paul sang the New Zealand National Anthem. The Avalon Voices led all in the hymns. Jemima Sanguinetti was Bugler this year at both the dawn and 11am services. The Catafalque Party and Honour Guard at both services was formed from 305 SQN Australian Air Force Cadets, (Pilot Officer Robert McNaught). Brett Lee led the March as piper for the sixth year in a row and the Colour Party was formed from two Australian sailors and a New Zealander this year, Warrant Officer Shane Pretty from the NZ Army, and local lad Ian McGiffen, Stuart Mizzano who are both from HMAS Success, RAN.

The record of the Anzac Day Address at Avalon RSL, given this year by Commander Michael Maley DSM (Distinguished Service Medal) RAN,:

Before this day who had heard word the ANZAC. Hereafter; who would ever forget?

Commodore Sloper and Distinguished guests, Returned Service men and women, currently serving members, residents of the Northern Beaches and most importantly Children of Avalon Beaches, and the Peninsula - for it is you that will carry forward the baton of the ANZAC tradition and keep alive something so sacred and so entwined into the very fabric of Australian society- the mourning of the dead, the remembrance of a sacrifice and the celebration of a courage that gave birth to a nation.

In the half light of early dawn April 25 1915 thousands of Australian and New Zealand young men stormed ashore on a lonely cove in Suvla Bay. By days end history tells us that 50 Aussies were dead - many dying either on the waters edge-or less than 50 metres up the beach. In the words of Eric Bogle," we was butchered like lambs at the slaughter." The dead ranged from farmers and clerks to a fifth year medical student and even a member of parliament.

Today, all over Australia communities come together from dawn to noon to celebrate the legend of the ANZAC and in doing so pay homage to the sacrifices that Australian Service Men and Woman have given through two world wars, Korea, Malaya, Vietnam, Timor, Kuwait, Iraq and Afghanistan. ANZAC Day was forged on 25 April 1915 but belongs to the 100,000 souls that died under the banner of the union jack and the southern cross so that we may be who we are today. From ANZAC cove, Australian soldiers were redeployed to the Western Front. At a time when the Australian population was but a few million, we lost 51 000 young men. To have stood in the war cemeteries of Ypres and Paschendale is something that will live with me forever. In the words of one war historian, ‘there is no land sown more heavily with the seeds of Australian sacrifice.’ To stand at the gravestone of a soldier with two names, knowing that he has signed up under an alias because he was under 18 is indescribable. At that age he could have been playing for the Pittwater Tigers, taking his HSC at Barrenjoey or surfing for Newport Plus.

In World War Two Australians carried forth the legend of ANZAC, distinguishing themselves in combat in places as diverse as Tobruk, Kokoda and the Solomon Islands. The Warriewood bus shelter memorial contains the names of five men killed in WWII, the Mona Vale Primary School honour roll shows the names of more and the Avalon Beach RSL has names such as LEUT Samual McCaughey killed in New Guinea.

In Korea and Vietnam Aussies continued the sacrifice, displayed outstanding courage and held their own in battles such as Kapyong and Long Tan. And yes names of Avalon men sadly are emblazoned on the honour role. Lt John Fraser and Capt Analdy Danilenko, Killed in Action, Vietnam.

In Borneo, Malaya, Timor, Kuwait and Iraq, Australian men and women served with distinction, moral integrity and courage akin to that of the ANZACS.

Today thousands of miles from home in places such as Taren Kowt, Urazghan, Kandahar and Kabul, a very special group of men and women will pay respect to the ANZACs, stand to attention as the last post is played, say those sacred and enshrined words- Lest We Forget. They will then put on their body armour pick up their guns and get back to work knowing that we at home wish them a safe return. They are very much the modern day ANZACs who I can assure you are doing our country proud and achieving great things while you and I go about our daily business- The price of liberty is eternal vigilance.

Most surely today wives, families and friends of Australia’s 32 fallen will stand at the graves of their ANZACS and mourn their loss, applaud their courage and realize the enormity of their sacrifice, and we should do the same. Today when the last post is played and we feel that tingle up our spine, that is those 32 ANZACS saying do not forget us or those that have gone before us- do not forget the courage, the sacrifice and the legend of the ANZAC.

And you know what as a returned servicemen I feel very comfortable knowing that the children of today will carry forth the ANZAC baton. Whether it be turning up to march proudly wearing the medals of their Grand Parents, turning up to cheer on the diggers or simply knowing through their education what is meant by the word ANZAC for in the words of a 12 year old poet it is "a story that must forever be told".

When deployed to Afghanistan, we received many gift packs and letters from schools, most notably in the Manning Shire. Let me read out two of them.

First from a Brooke Sullivan of Holiday Point; “Dear Army men and women. I hope you are proud of yourself because I would be too scared to do your job.”

And this one from nine year old Keith; ‘Yo Bra, I hope you are well. Thank you for serving our country. Peace out homie.”

Although as a Generation X I do not really think of myself as Bra, knowing that these young children had taken the time to send us thoughts of support boosted morale to a level that you just cannot imagine. So yes I feel very comfortable that the ANZAC spirit will be carried forth by the "bras" of the younger generation.

In finishing, there is a very evocative song about ANZAC Day by Eric Bogle called "And the Band Played Waltzing Matilda" in which he says “As year follows year, more old men disappear and soon no none will march there at all". But year has followed year and all the ANZACs have disappeared- but look at how many people come out to March, look how many have turned out today in Avalon, look at the hundreds of thousands that turn out in Sydney and Melbourne. Because Australia and Australians will never ever forget the sacrifice, the courage and the Legend -"To the end to the end they remain" 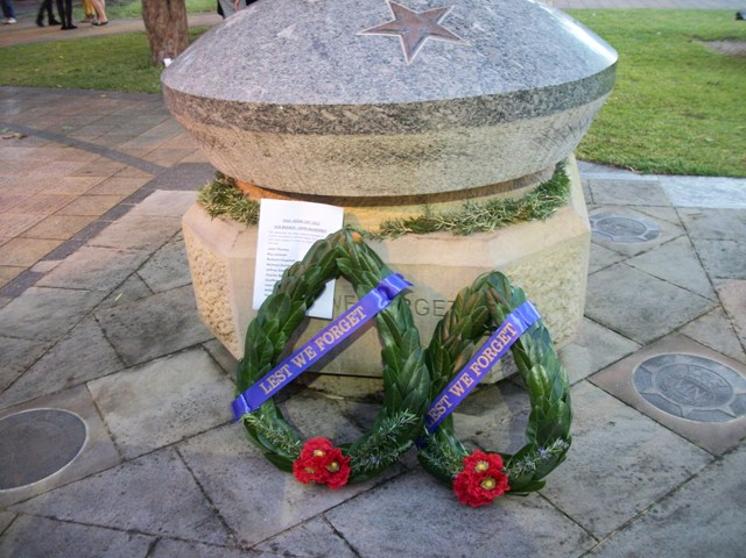 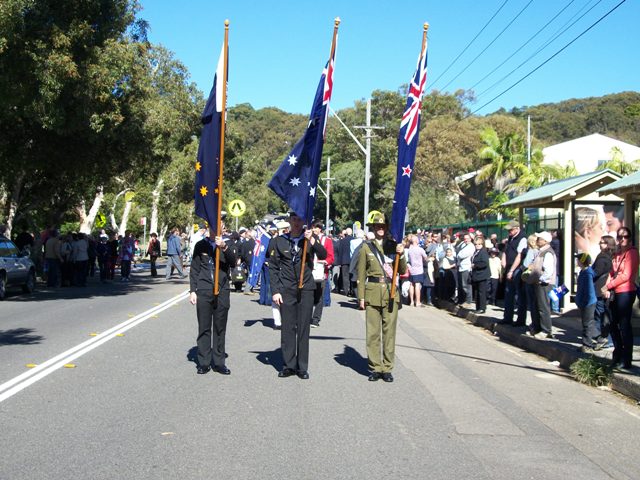