Glass if Life: Glass is a big deal for Céline Cousteau. Céline knows that Glass loves the sea, and that as a relative of Jacques Cousteau, the sea is important to her. Because Glass doesn't contain the same damaging chemicals as plastic, and can be easily recycled glass is much better for the sea, and the environment at large.

Practically speaking, a Green Economy is one whose growth in income and employment is driven by public and private investments that reduce carbon emissions and pollution, enhance energy and resource efficiency, and prevent the loss of biodiversity and ecosystem services. These investments need to be catalyzed and supported by targeted public expenditure, policy reforms and regulation changes.

The UN Environment Programme defines the Green Economy as one that results in improved human well-being and social equity, while significantly reducing environmental risks and ecological scarcities. In its simplest expression, a green economy can be thought of as one which is low carbon, resource  efficient and socially inclusive.

A Celebration of where we all came from. More at : http://worldoceansday.org/ 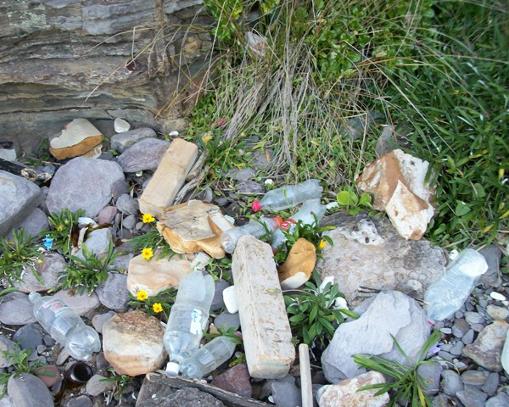 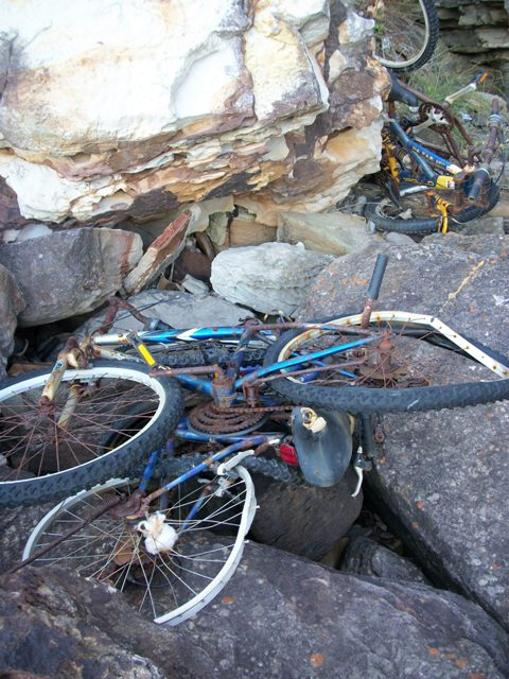 World Environment Day and World Oceans Day – 5th and 8th of June, 2012 Glass or Plastic: A Kiss to the Cheek of Mother Nature

Remember when milk used to come in a bottle, with an inch of cream of top, and you would wash these 600ml, or one pint bottles, and return them so they could be filled with untainted, un-cream-removed milk again. Remember when you received back 2 or 5 cents for your soft drink bottles and the enterprising among us gained large bags of lollies as proof of a little hard work? This was, apart from the purity and higher quality of the product within the glass, environmental friendliness. Unfortunately some ‘advances in technology’, thought and attitudes have proved themselves to be the opposite. We may have gone backwards in our striving to go forwards, and even though we know how to redress these mistakes, and put back into the earth what shall enrich it, and seek to modify all pollutants and polluters of all air and waterways, one of our biggest stranglers of forward motion in a clean and green way, that will ensure those at knee height also get to gaze upwards at tall tall tress once fully grown, is to restore glass bottles and do away with plastic.

This would seem to fit the  2012 theme for World Environment Day is ‘Green Economy: Does it include you?’ as not only can we not afford to persist in a head in the sand attitude, or a bit of nose lifting because we’re carrying a plastic bottle of water, these pellets of death are so costly to manufacture, so costly to transport, so costly to clean up that if their relative price tag equalled what they really cost we’d all be better off swimming in champagne financially speaking. Whole circle thinking; holistic, holism, call it what you will, is common sense really, and returning to the farm, or returning enough of the farm to urban settings to ensure they too have their kneebone connected to their thighbone, or their worm farm connected to their earth plot.

To lovers of our oceans ‘glassy’ is a term applied to waves and the ocean when surf is without a ripple and looks like glass. Nowadays, in the estuary’s tide marks and along the rock platforms, where the highest tide again meets its perimeter of cliff and sandstone, a residue of plastic bottles and plastic bottle caps accumulates. Some of these are soft drink, most are water bottles or ‘spring’ water plastic tubes.

Relative of Jacques Cousteau, Céline, is one of the current proponents for a ‘Glass is Life’ Campaign which seeks to turn back the tide, no pun intended, on this break in real cycles and holistic circles. Glass is made from a mixture of sand and silica (SiO2), sodium carbonate (Na2CO3)

Plastic bottles are made mostly from petroleum and as the world is currently waist deep at least, in producing 110 million tons in 2009, with a conservatively estimated 100 millions tons of plastic debris floating around in our oceans, we are producing our own worst ever oil slick.  If you were to fill one quarter of a plastic water bottle with oil, you would be looking at roughly the amount used to produce that bottle.

In 2009 both Pepsi (1st) and Coca-cola, who produce 42% + of Australia’s plastic bottled water, developed a product that incorporated some of the surface materials of the planet: Traditional PET bottles are made from petroleum, a non-renewable resource. The new bottle is made from a blend of petroleum-based materials and up to 30 percent plant-based materials. From: HERE

Sounds a bit like a bionic man; "you can be 30% real if you like!" or the equivalent of what percentage of our own organic forms is water!

Unfortunately, despite the 100% recycling aspect that touts these bottles as ‘best’, only 15-35% of plastic bottles do make their way into recycling facilities. Plastic bottles take, at least, hundreds of years to decay, although some sources state it may be 1000 years. You could apply this ‘recycling’ statistic to glass as well since apathy and laziness seems to grip so many humans in their being-ness but glass will not break down in a way that mangles the surface of the earth as it stems from there, not underground as a ‘blood’ of the earth, to begin with.

The discarded plastic bottles that don’t make their way into landfills are being found in the ocean and along its fringes as you can see from the photo taken at Avalon on Thursday (24.5.2012). So much is in the ocean a term for this, the Great Pacific Garbage Patch has been coined and Pittwater Council and the Coastal Environment Centre are offering a free screening of the documentary ‘Bag It’ on Friday 8th of June which will give you an indepth view of this anti-wonderland. World Oceans Day is celebrated on the 8th of June.

The proliferation of plastics in the world's oceans poses a serious threat to many marine organisms, and some scientists are concerned that, rather than breaking down entirely, plastics actually break down into very small segments which could potentially be consumed by microscopic organisms.

This could have serious environmental repercussions, as such organisms are not equipped to digest plastics. Therefore they could die in mass numbers, or be consumed by animals higher up the food chain. This could potentially cause such predator organisms to accumulate a variety of the hazardous substances used inplastic production, leading to a breakdown in the health of the world's oceans as well as impacting the health of animals (including humans) which use these organisms as a source of food. From; http://www.wisegeek.com/what-is-the-life-cycle-of-a-plastic-bottle.htm

If we want clean waves, if we don’t want to be ingesting tiny shards of plastic with our food and look forward to the resulting health dilemmas as a consequence, if you want to take your children for a walk along the shore to look at what’s in the rock pools rather then cart back large bags of pollutants, then we must plot away again and restore a real whole cycle and whole circle and purchase glass bottles and a juicer...

Yes, the garbage found at Avalon was collected once again, and for the 32nd year running, placed in plastic bags also found on the rocks, and taken to bins.

Alternative use for all that Plastic:

The Earth Institute, Columbia University (USA): What Happens to All That Plastic? by Renee Cho. January 2012. At: 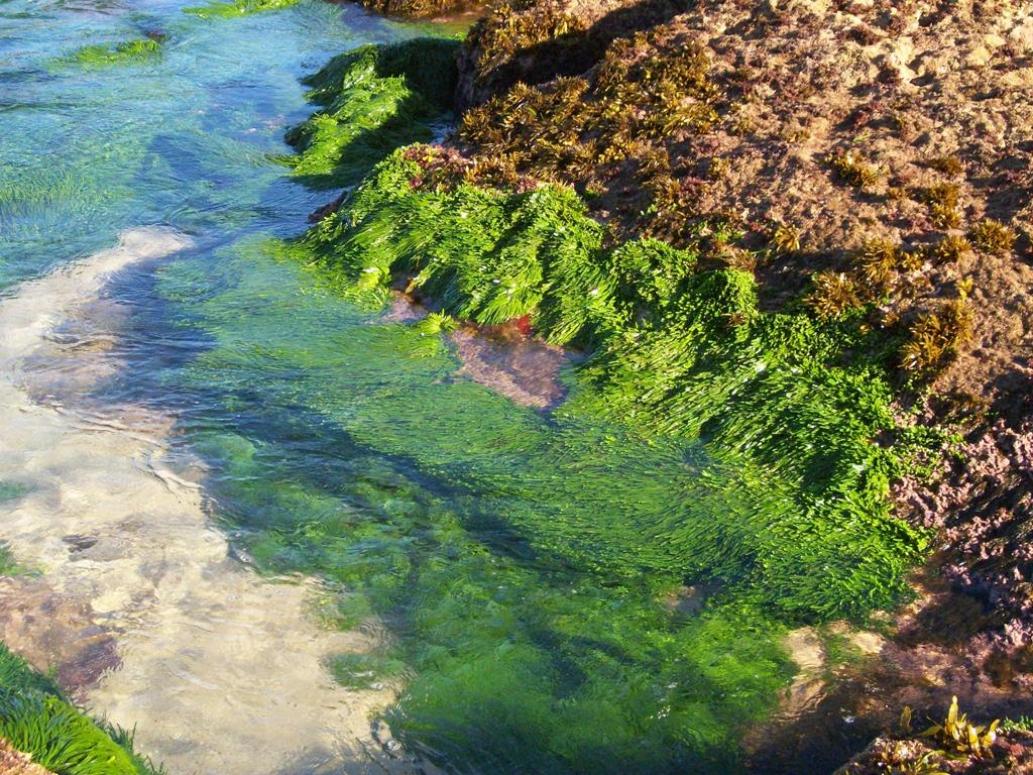 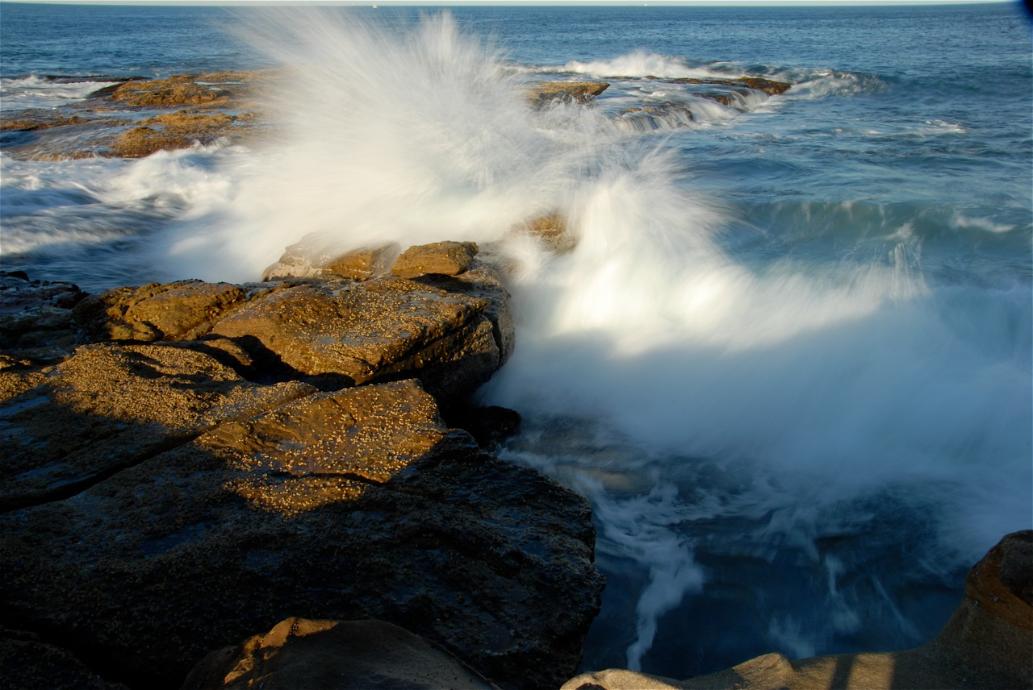 Above  Rock platforms photograph by Adrian Boddy. All Rights Reserved.