Round Sydney - BY Motor Car - A Trip to Newport: 1904 Sydney Mail Article 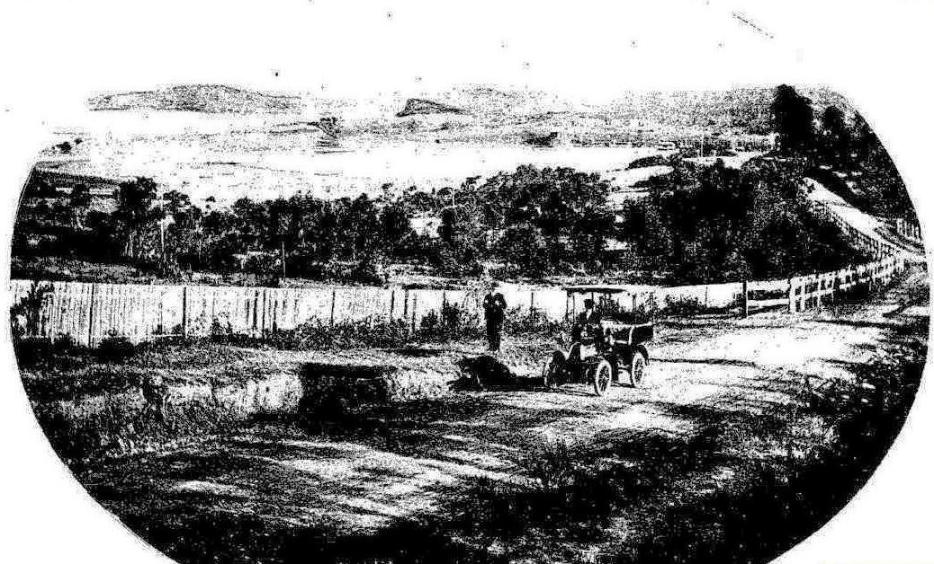 Round Sydney - BY Motor Car- A Trip to Newport.

THE motor car is a luxury for the comparative few. In Sydney the delights of yachting have been vouchsafed to many who could never have experienced them otherwise by co-operative ownership and by hiring. Messrs. Thomas Cook and Sons, the well known tourist agents, whose Sydney branch is in Hunter-street, guided by the success of the motor service to the Jenolan caves, have decided to make a motor drive equally accessible to all. They have arranged for motor trips around the most attractive routes about Sydney— and no other city possesses so infinite a variety —on very moderate terms, which afford to the motorless resident an opportunity of showing new hospitality, and to the visitor a delight hitherto difficult of attainment. It was for one of these trips — Sydney to Newport, via Manly — that our representative last week accepted an invitation, and took with him a ''Mail' photographic artist. The stretch of coastal country between Manly and Rock Lily, and thence along to Newport by one road and Bayview by another, is justly esteemed to afford one of the most beautiful drives of its type in Australia —many go further, and declare it to be one of the most beautiful in the world. When to this is added the strip of country between North Sydney and Manly, with its magnificent glimpses and panoramas of the lake-like waters of Middle Harbour, and of Sydney Heads, there is comprise d within the day’s outing a series of pictures for which we can only seek rivals in the world-famous portions of the Mediterranean coasts. And here we have characteristic elements of beauty either lacking there or possessed by us in a higher degree. The popularity of the bicycle made familiar to thousands, who would not have otherwise seen them, these beauty spots. Others have driven or used the coach services. But the ideal method of seeing this beautiful stretch of country and spending a thoroughly enjoyable 'open-air' day is by motor car. There is no questioning the fascination of automobilism. The man who has not a car may effect to disparage his more fortunate neighbour who has, and may make satiric remarks as to the latter’s misadventures in his initiatory stages. He may jibe at 'stink pots,' at dust, at the odour of petrol, and the rest — all these are for the man who stays behind, not for the man in the car. And for the man in the car there is the glorious sense of speed controlled at will, the bounding freedom of the rapid moving automobile, the easy run up the hills that have hitherto been toilsome trials to his horses, the grand rush of speed on the level stretches, the flight as through space against the keen breeze. All this produced by a turn of the wrist, and all comprising a sense of exhilaration and of power almost intoxicating in its delights where, as on the routes chosen by Messrs. Cook, the roads are good and the scenery is delightful.

Our car, a 9-h.p. De Dion, piloted by an expert driver, set out from Messrs. Cook's office, on a delightful day of last week — bright, clear, sunny, with a light cool breeze. It was threaded skilfully through the traffic over the wood blocks to the North Shore horse ferry. Landed on the other side, we ran easily up the long hill to Ridge street, and thence fairly flew along the level roads on the heights, with their superb outlook, to the Spit ferry, experiencing a preliminary taste of what a motor can do when the road is free and good. Here and there a stop was made to take a photograph. 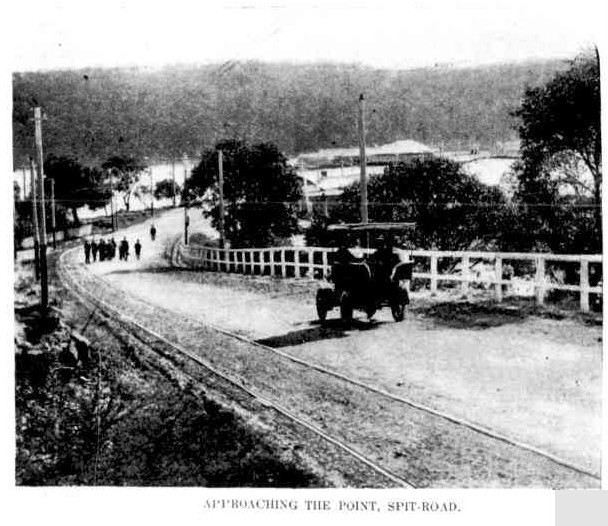 Across the Spit ferry, and again we set out up the picturesque winding road on the Manly side, along the crest past many spots of interest. We passed a dwelling where the two coiners were wont to practice the revolver shooting which they ultimately used upon policemen. As we went, every turn of the wheels seemed to open out a fresh aspect, each more insistent than the last, in its claims to consideration. Down the Red Hill, past 'Dalley's Castle,' and that most picturesque of kirks, the Manly Presbyterian Church, and after a brief pause for refreshment, our driver turned him on that coastal stretch to Newport, which lives in the memory of all who have ever seen it. 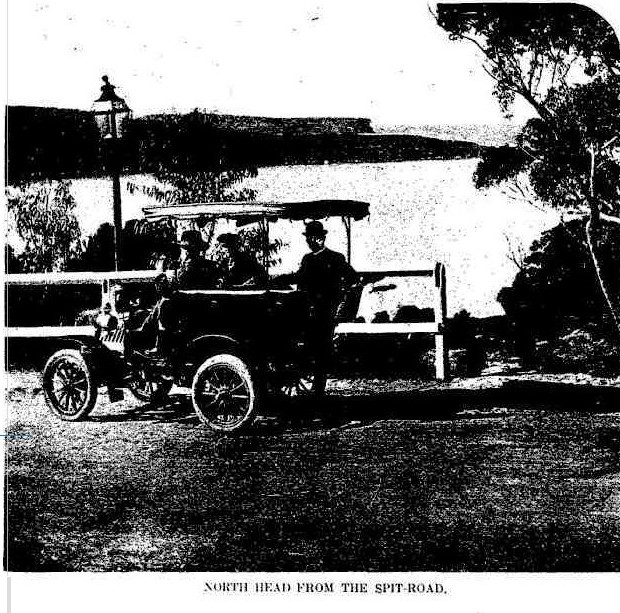 NORTH HEAD FROM THE SPIT-ROAD.

The pictures on this page will give some idea of the glories of the whole trip, but no mere black and white can suggest the wealth of colour and the atmosphere which are the most exquisite elements in the scenes themselves. There is every type of waterscape —Smooth beaches in Middle Harbour, with the gently rippling marge of lake-like waters, shimmering in the sunlight or giving back amore intense blue than even the blue of the Australian sky. Lagoons at Curl Curl and Deewhy, the waters running in among the thickets on the banks, and the trees mirrored oil their surface. The forest-bound lake at Narrabeen; great stretches of white and grey and yellow beaches along the long line of ocean front from Manly to Barranjoey.

Rushing surf breaking upon the sands, surging over the rocks at Long Reef, dashing on the cliffs of each bold headland that breaks the beach line till they are mist enshrouded with the rising spray. And for landscape, nearly every variety but the Alpine. The Middle Harbour heights give glimpses of the picturesque suburbs that are generically termed Mosmans, with their red roofs and constant effort at the picturesque in architecture from cottage to mansion — an effort often crowned with success. The sunlit bush and verdure-cinched hills set in opalesque waters as the run down the Spit-road is made. There is the charm of Sydney's only 'village' when Manly is reached: and then along the road to the far famed Hawkesbury at Pittwater — only the brush of the inspired artist and the pen of the true poet could convey adequate idea of that.

Take one scene alone. The view from the Newport hill looking south across Mr. Brock's estate, and on over Rock Lily to the bold hills and headlands about Narrabeen. Here the great master of artistic composition, Nature, has made a masterpiece. Look at the photograph as it is reproduced — and it has some of the defects inherent in even the best photograph in its accentuation of the line of fencing. But take the picture as a whole— the long stretch of road across the foreground and to the right carrying the eye away with its admirable perspective. In the reality the road banks have red and rich yellow tints: above them the blackberry bushes run riot in autumn colouring; across the fence the rich dark greens and browns of the bush throw and the bright greens and light yellows of the neat pastures beyond. Lagoons, like opals in a golden setting, more trees, green hills, dark distant bush on the n-ht and in the centre. And on the left the white beach with its whiter fringe of ever-moving surf, a sapphire sea, a towering, bold, brown cliff. Above all the vivid blue sky and the whole landscape bathed in the rich light of an Australian winter day's sun that glorifies all it touches. A mere catalogue of forms and colours, you say? Yes, but the reality is exquisite, and it is only one of a long series of beautiful scenes along a beautiful road. Near where we stopped to take the photographs one of the great army of cyclists to whom every inch of the way is familiar, lay under a tree conning a little volume. It was Omar. The cyclist had realised his tree and his flask of wine, and 'thou'? Possibly she, too, might have materialised had we waited — he was evidently waiting — or perhaps his wheel was his love. At least the Rubaiyat seemed peculiarly suited to the setting. That, the Persian poet would have revelled in — even plus a bicycle and motor car. As we bowled gaily along the smooth surface with the free swinging motion of the motor car at speed, at every turn in the road came the suggestion that the photographer should get down and ''take that.' The car must have been laden with photographic plates had a tithe of the suggestions been adopted. Yet each was fully justified by the special aspect of the moment.

Take the Narrabeen lake, for instance, with its surface still and every stem and bough reflected It is charming even from the roadside, and when that is left and by boat the visitor rows in among the bold hills with their adornment of splendid forest trees the wonder is that though thousands visit it in the year, and hundreds go upon its waters, the number is not many scores of thousands- We go far to see lake scenery any finer. Then take the stretch of forest road running down into Rock Lily with the hills beyond. That is exquisite. And on the coast from Newport to Barranjoey there are scenes rivalling the famous Illawarra coastal scenery — smooth buffalo-grassed slopes and flats, bush-crowned hills, tropic luxuriance of palm, towering cliffs, shell-strewn beaches, and always crowning beauty— sea and sky.

As for Pitt water (which term includes the lovely Bay View), that would require a chapter to itself, and then its beauties would not be adequately described. All that visitors, distinguished or undistinguished, have written as to the glories of the Hawkesbury applies in an accentuated form to its Pittwater arm. Here we have the bold and graceful hills, palm-clad slopes, fern gullies rivalling the great fern gullies in the Dandenong ranges, of which Victorians are so proud, fjord-like waters, recalling Norway or New Zealand, and the splendid stretches of that noble reserve, the Kuring-gai Chase, accessible only rowing boat or launch 'obtainable on the spot- It is not surprising that Sydney people — Professor Anderson is a notable instance — are establishing summer homes for themselves here, where all is peace, and Nature has lavished her richest gifts of soil and water, climate and scene — the gardens and such orchards as those of Mr. Roche show the fertility of the soil. And there is this added attraction about the whole district we have been endeavouring to suggest, everyone has heard of the particular portion of the anatomy upon which an army is held by high military experts to travel — sometimes (when bullets fly) in a literal- but always in a metaphorical sense. J. M. Barrie last year invented for it a new euphemism. On the road from Manly to Pittwater, and at that lovely Hawkesbury arm, 'Little Mary' is well catered tor at every stage. There need be no anxiety as to commissariat, even when the hamper has been forgotten in the eager zeal of the motorist to 'get her going.' As for our car, it did its work, guided by the driver (J Cunningham) admirably. Since then it has had a run up to Moss Vale, whence it returned comfortably in five hours. 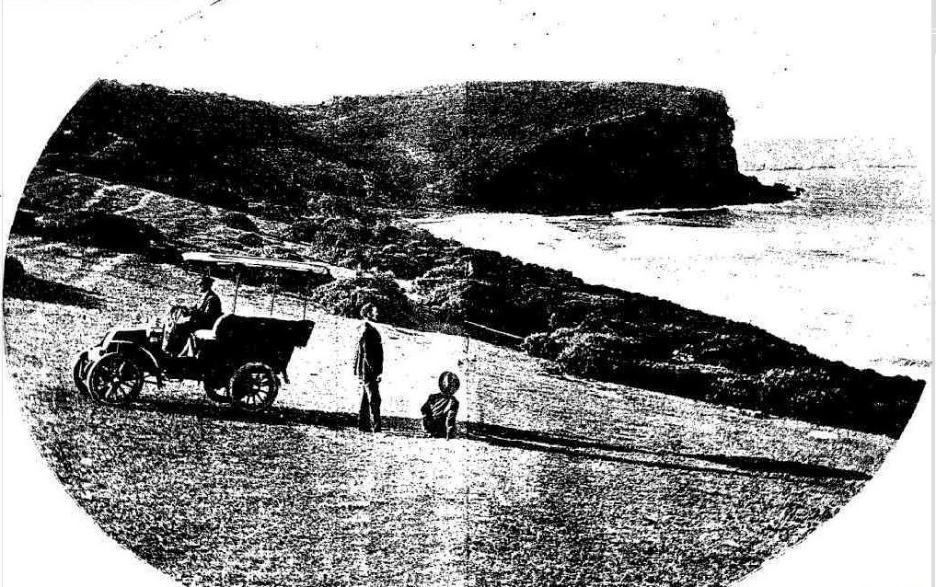 ON THE COAST AT NEWPORT. 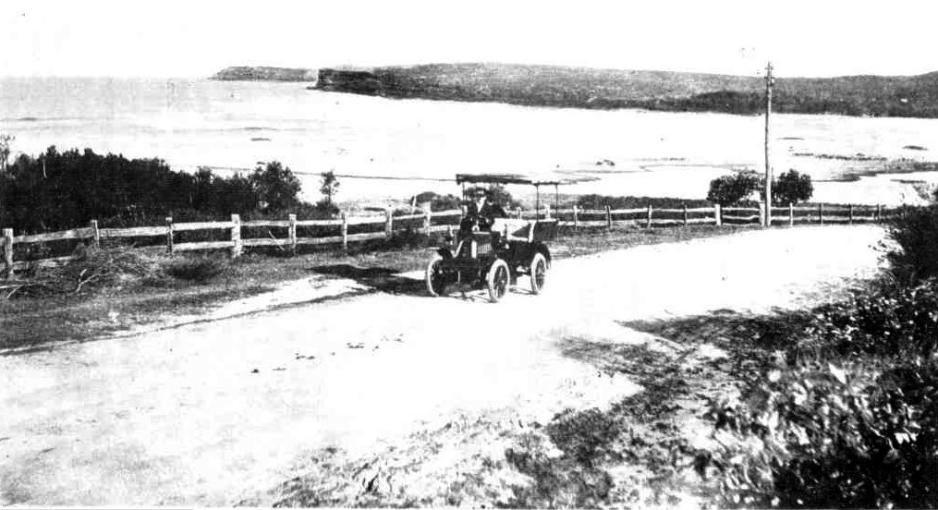 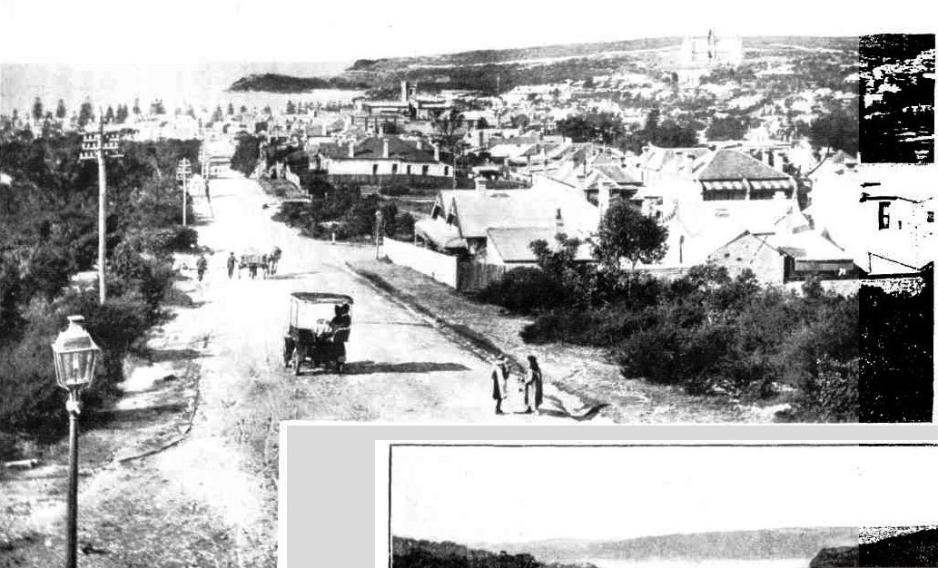 DOWN THE RED HILL TO MANLY. 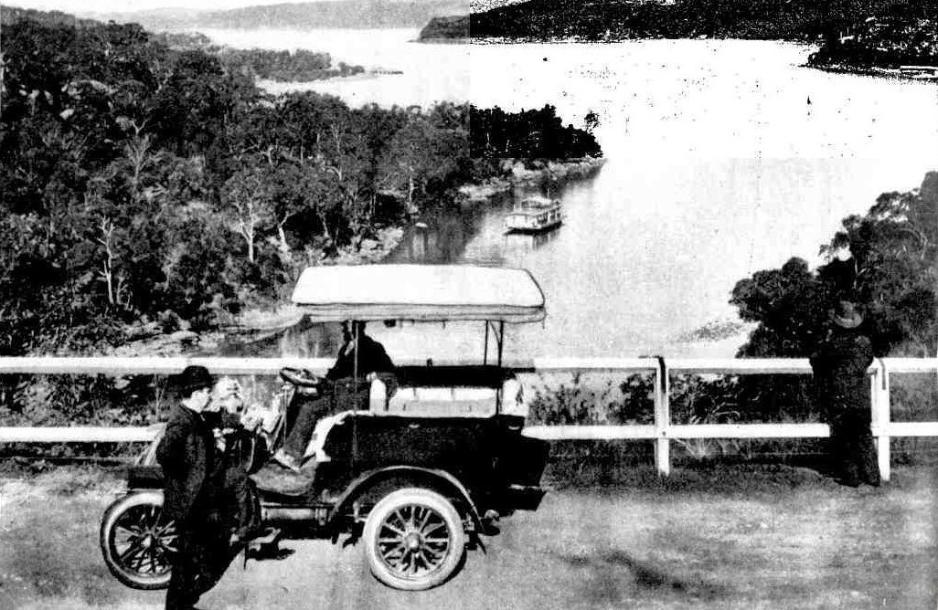 MIDDLE HARBOUR FROM THE SPIT-ROAD (MANLY SIDE).