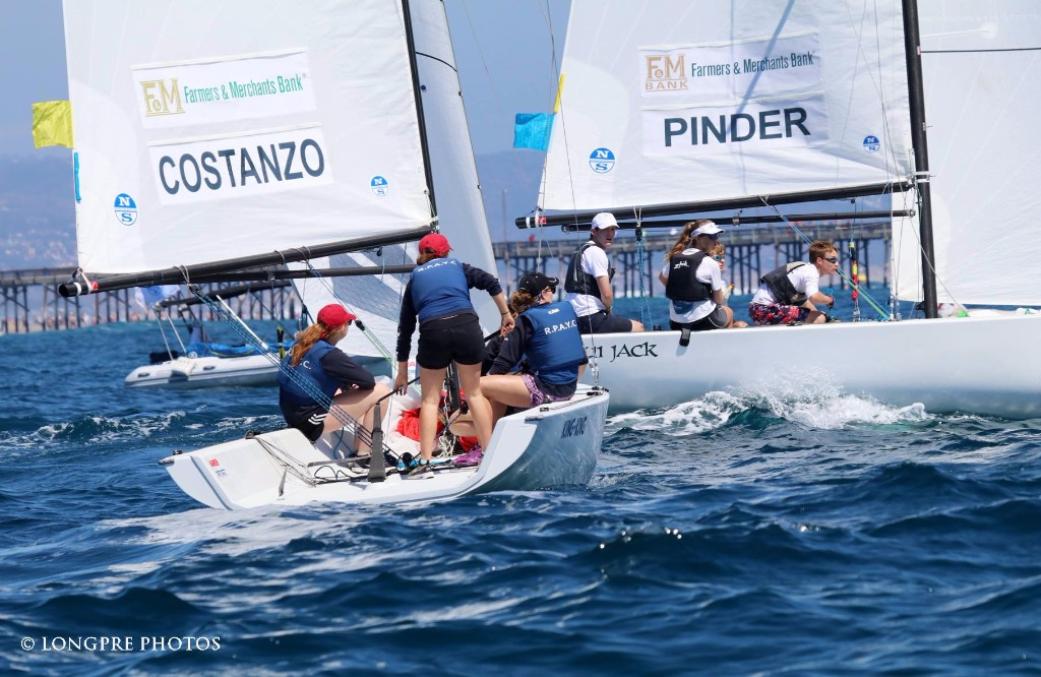 Friday 28 July 2017
Twelve of the best youth match racers will race out of the Balboa Yacht Club from 31 July to 5 August at the 2017 Youth Match Racing World Championship.

The Championship brings together the best youth match racers from around the world, acknowledging their skills and offering a pathway to senior match racing competition.

In its fourth year, the Youth Match Racing Worlds has provided a pathway for the best young match racers to test themselves against the best in their age group. Joakim Aschenbrenner (DEN) claimed the inaugural title in 2014, followed by Sam Gilmour (AUS) in 2015 and Will Dargaville (AUS) in 2016.

The 2017 Worlds features a record number of participating countries including two skippers from each of the USA, New Zealand, and Australia, and one each from the Great Britain, France, Switzerland, Italy, Sweden and Denmark.

Furthermore, the 2017 edition will welcome two all-female crews with Clare Costanzo leading an Australian team, and Johanna Berqvist heading up a Swedish entry.

Australia's Harry Price will come into the event tagged as favourite.

The young Australian is World #6 in the World Sailing Open Match Racing Rankings following several exceptional performances at Grade 2 and 3 events over the last 24-months.

Price finished as runner-up at the 2016 Youth Match Racings Worlds in Noumeau, New Caledonia and with experience of racing out of the Balboa Yacht Club, he'll be gunning for top spot in 2017. Price claimed the honours at the 2015 Governor's Cup, an International Youth Match Racing Regatta that is the oldest youth match racing event in the world, hosted by Balboa Yacht Club since 1967.

The Governor's Cup celebrated its 50th Anniversary in July 2016 and in honour of that milestone, the Club's members and friends funded the design and construction of 12 new "Governor's Cup 22's” which will be used at the Youth Match Racing Worlds.

Apart from Price, there are no further returnees from the 2016 Youth Match Racing Worlds.

However, many of the competitors have experience of racing on the waters off Balboa Yacht Club following the 51st edition of the Governor's Cup that was held earlier this month.

New Zealand's George Anyon finished eighth, Great Britain's Matt Whitfield tenth and Charlie Welsh of the USA was 12th. All three will use their experience at the Youth Match Racing Worlds.

Racing will commence on Tuesday 1 August at 12:00 local time. A double round robin, where competitors face each other twice, will commence proceedings.

At the end of the round robin phase, the top four teams will advance to semi-finals with the top two advancing to the final to crown a 2017 World Champion.

Social Media
Follow the event on World Sailing's social networks and get involved in the conversation using #MatchRacing #YouthSailing #WorldSailing.

ABOUT THE YOUTH MATCH RACING WORLDS
The Youth Match Racing World Championship joined the World Sailing family of events at the 2012 Annual Conference in Dun Laoghaire, Ireland. The Championship brings together the best youth match racers from around the world acknowledging their skills and offering a pathway to senior match racing competition.

In its fourth year, the Youth Match Racing Worlds has provided a pathway for the best young match racers to test themselves against the best in their age group. Joakim Aschenbrenner (DEN) claimed the inaugural title in 2014, followed by Sam Gilmour (AUS) in 2015 and Will Dargaville (AUS) in 2016.

ABOUT WORLD SAILING
World Sailing is the world governing body for the sport of sailing, officially recognized by the International Olympic Committee (IOC) and the International Paralympic Committee (IPC). Founded in 1907, World Sailing's vision is for a world in which millions more people fall in love with sailing; inspired by the unique relationship between sport, technology and the forces of nature; we all work to protect the waters of the world.

World Sailing is made up of 145 Member National Authorities, the national governing bodies for sailing around the world and 114 World Sailing Class Associations. 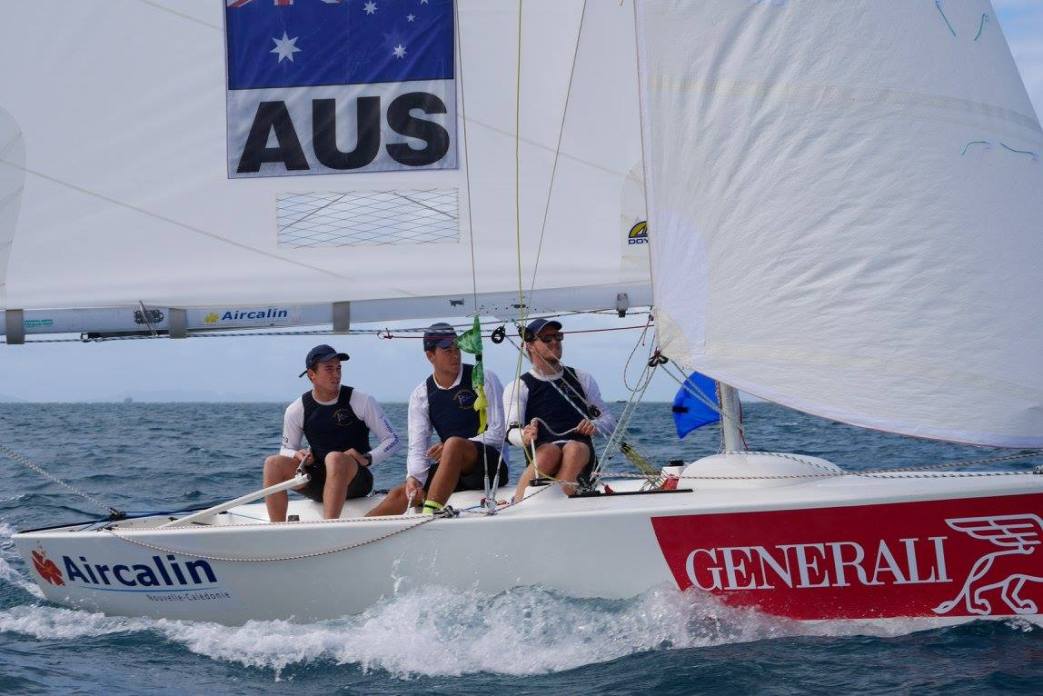 Saturday July 29th, 20-17: RPAYC
Our Youth Development Team of Clare Costanzo, Jess Angus, Emma May and Hannah Lanz supported by coach Tom Spithill have just finished the Governors Cup Youth Match Racing Championship at Balboa Yacht Club in Newport Beach California in a creditable 6th place. The Governor’s Cup is the oldest international youth match racing regatta in the world, with the 51st edition held from July 17 – 22, 2017. Twelve teams from around the world competed in the Governor’s Cup 22 sloops, which are provided to the competitors by the event's host, Balboa Yacht Club. Follow their results here: http://www.govcupracing.com/results/

The team now have a week of training, rest and recuperation ahead of the Youth Match Racing World Championships which start 1st August also at the Balboa Yacht Club.

The RPAYC girls managed to again have an improved day out on the water with, with 4 wins and two losses. Both loses were against the number 1 & 2 ranked teams.

The feature Match of the day was against fellow Australian and world (open) number 6, Harry Price (CYCA).
Costanzo copped an early penalty in the prestart for failing to enter correctly, but made up for it with a superb start, forcing price to have to have to do two slow tacks off the line, and take a 3 boat length lead. The girls lead around all marks and elected to take their penalty turn right on the finish line. This match was going to come down to the wire! The girls attempted to undertake their penalty turn, and it looked like they had won it with the RC awarding them the win. Unfortunately the umpires believed that the spinnaker was not dropped below the goose-neck (a requirement when taking a penalty turn), and the win was reversed, and given to Price. The girls were adamant that the spinnaker was below the gooseneck, and were a bit frustrated with not being awarded the win.

The team took the positives from the race as they had almost been the first boat to beat the then unbeaten team.
One of the positives taken from the race was their boat speed both upwind and down wind. Their great boat speed served them well in the next two races, winning their starts and winning by comfortable margins.

Tonight the team is competing in the Beer can races for a bit of fun onboard the Andrew 49 "it's ok!"

Unfortunately it looks like the top 4 is now set as we get to the end of the second round robin. We are currently sitting in 6th place.

The plan is to continue the success the girls have had today, and finish the second round robin strongly and carry this momentum into the Youth Match Racing Worlds next week.

Some fun photos from the BYC Beer Can races - Photos courtesy Stacie Brandt
A PHOTO HIGHLIGHT: Leonard Takahashi falls overboard after the bow of Harry Price's boat (far left in this photo) struck the starboard quarter of Takahashi's boat, abruptly stopping Leonard's big bear away. Leonard's feet missed the hiking straps and he kept going – a split second before Mary Longpre snapped this. Although damage and a penalty ensued, Harry and Leonard are both great sports and had a good laugh.

Killian would be the first to admit that it wasn't easy. While he won the first race against Takahashi with relative ease, the eighteen-year-old New Zealander came right back to tie the series with a win in race two.

This morning Takahashi arrived at the club with a big smile and said, "I was so excited last night I couldn't go to sleep." Clearly sleep wasn't an issue, and Takahashi also pointed out, "I love to be the underdog."

Australia's Harry Price, winner of the double round robin portion of the event - where every team sails against every other team twice - chose his opponent from among the semi-finalists as is the practice in modern match racing events. Many observers predicted that he would choose the youngest sailor in the group, Takahashi, and he did so.

But, like many such choices, sometimes they go terribly wrong; in this case, Price may regret that decision as Takahashi beat Price 3-1 in their semi-final.

Price, as the sixth ranked sailor in the World Sailing Open Match Racing rankings, was a favorite coming into the event but a few uncharacteristic mistakes resulted in his loss to the young Kiwi to set up what turned out to be an exciting Killian-Takahashi final.

Price and Weis sailed the petit final to determine third place.
Price's difficulties continued in a 3-1 loss to Weis.