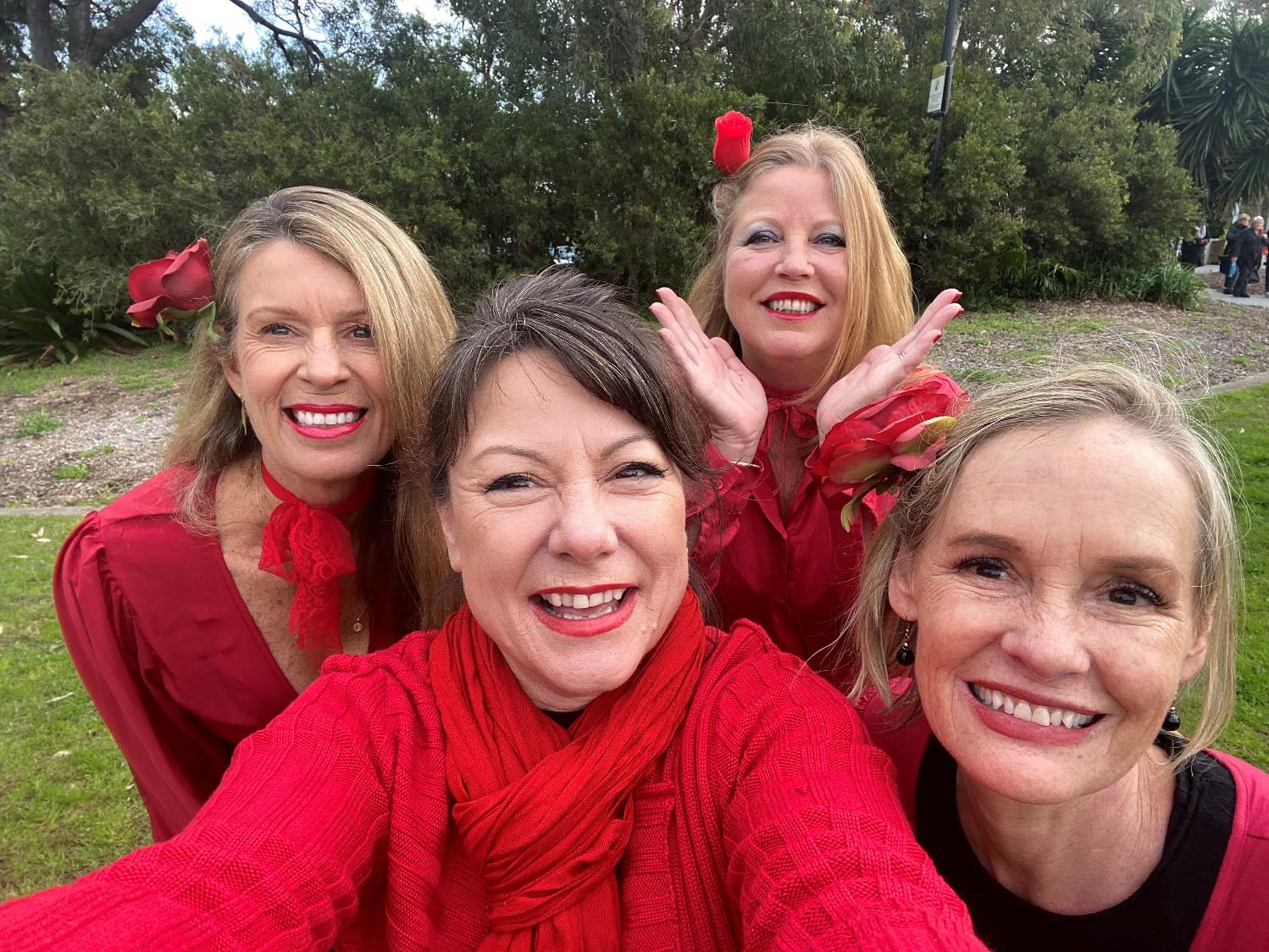 Front: Kate Lush, Simone Allen. Back: Cathy Hall and Elise Andrews. Photo: Kate Lush
On Saturday July 16th a Most Wuthering Heights Day Ever was organised by Elise Andrews and held in Mona Vale's Village Park to raise funds and awareness for The Women's Resilience Centre. Newport residents may remember Elise from over a decade ago making sure youngsters had fun on Halloween by getting local shops and families involved in some good safe fun there.

The Most Wuthering Heights Day Ever is an event held at locations around the world where participants recreate the music video for musician Kate Bush's 1978 song "Wuthering Heights". The event's inspiration is Shambush's The Ultimate Kate Bush Experience, which took place in 2013 in Brighton, United Kingdom, as part of Brighton Fringe, created by performance collective Shambush! who attempted to set an unofficial world record for the most people dressed as Kate Bush in one place, with hundreds attending.

In 2016, The Most Wuthering Heights Day Ever event was proposed to be held in at least 16 places worldwide including Adelaide, Perth, Northern Rivers, Sydney, Tel Aviv, Montreal, Atlanta, Copenhagen, Berlin, Uppsala, Wellington, Hobart, Amsterdam and Somersworth. Shambush! who inspired the event hosted an event in London and helped organise the largest event in Melbourne.

Since then the annual July event has grown, with another to be held in Sydney Park at St. Peter's on July 30th, this one aiming to set a record for Sydney's 'Wuthering Heights Days'.

The Women's Resilience Centre was founded in 2020 as a place of hope, healing and recovery for women who have experienced or witnessed domestic abuse and trauma.

Whilst many government and voluntary services provide housing and support for victims, most are short-term and through desperation, many women return to unsafe environments thereby perpetuating the tragic cycle of abuse and trauma.

The WRC is positioned to fill the gap between short-term crisis care and longer-term recovery. We provide a Resilience Program supported by a lived-experience peer-to-peer Mentoring Program, delivered nationally online and face-to-face. Through partnerships with housing providers, we are planning a national network of residential accommodation for up to 12 months, providing a safe space for women to reset their lives.

Simone Allan, Director and Founder Women’s Resilience Centre Ltd, and Director of The Mentor Evolution and Mondo Search, gave the following address at the inaugural Most Wuthering Day Ever for our area:

''The Women’s Resilience Centre is a northern beaches initiative. It is a service to provide hope, healing and long term recovery for women and their families who have experienced or witnessed domestic abuse and trauma.

The statistics state that one women dies every 8 days in Australia and on the Northern Beaches over 130 + DV incidents are reported each month. Trauma is Ike a cancer that pervades if not dealt with and it presents itself through dysfunctional behaviour.

It is estimated that 75% of Australian adults have experienced a traumatic event at some point in their life (Productivity Commission estimates using ABS 2009). International studies estimate that 62–68% of young people will have been exposed to at least one traumatic event by the age of 17.

The key to a road to recovery from trauma is a non judgemental empathic and supportive community.

If we do not repair we will repeat.

For women stepping out of domestic violence on the northern Beaches there are some Incredibly supportive short term crisis care shelters where women can go, but they can only stay in residence for 12 weeks and then where did they go? Who is there to support them? Usually a case worker is assigned to them for a period of time. How do they navigate stepping forward as dealing with trauma that takes about 7 years to recover.

In Australia women on average return to unsafe places  7-11 times, as they have no clear pathway forward.

Enrolments for the winter series of the Financial Wellbeing program have reached nationally, proving the good will of the a Northern Beaches Community.

Exciting news we open our first hub in Mona Vale very close to this location in Spring the centre and will allow women a place to come and breathe to find programs of support and community to learn new skills and to learn to play and smile again and connect with a supportive non judgemental community.

We are asking for support for the Women’s Resilience Centre as it is completely Volunteer led and all our funding to date has been through the good will of this community, we have raised $250k but need more support to operate our centre, prove the model of long term community support and care and roll our service out nationally to regional areas of Australia.

Many people like myself came to the sea to heal and and we are blessed in this community to have a playground of mother nature combined with incredible giving well-being experts to prove the model that we want to offer of long-term support for families who have suffered domestic violence and trauma.

If you have time to volunteer to offer well-being services - whether it be health or recreational learning programs  - singing classes, yoga, meditation, cooking etc or financial support please get in touch with us come and talk to us or reach out to us through our website www.women’s resiliencecentre.com.au

The Women’s Resilience Centre is a not for profit organisation and has charitable status. All donations are tax deductible.

Today is about dancing and celebrating that we are worthy of peace, finding our agency and receiving the bounty of this life. Enjoy the dance! Dance to the lightness and goodness of our community, celebrating this beautiful amazing part of the planet!

Thank you for joining us today. 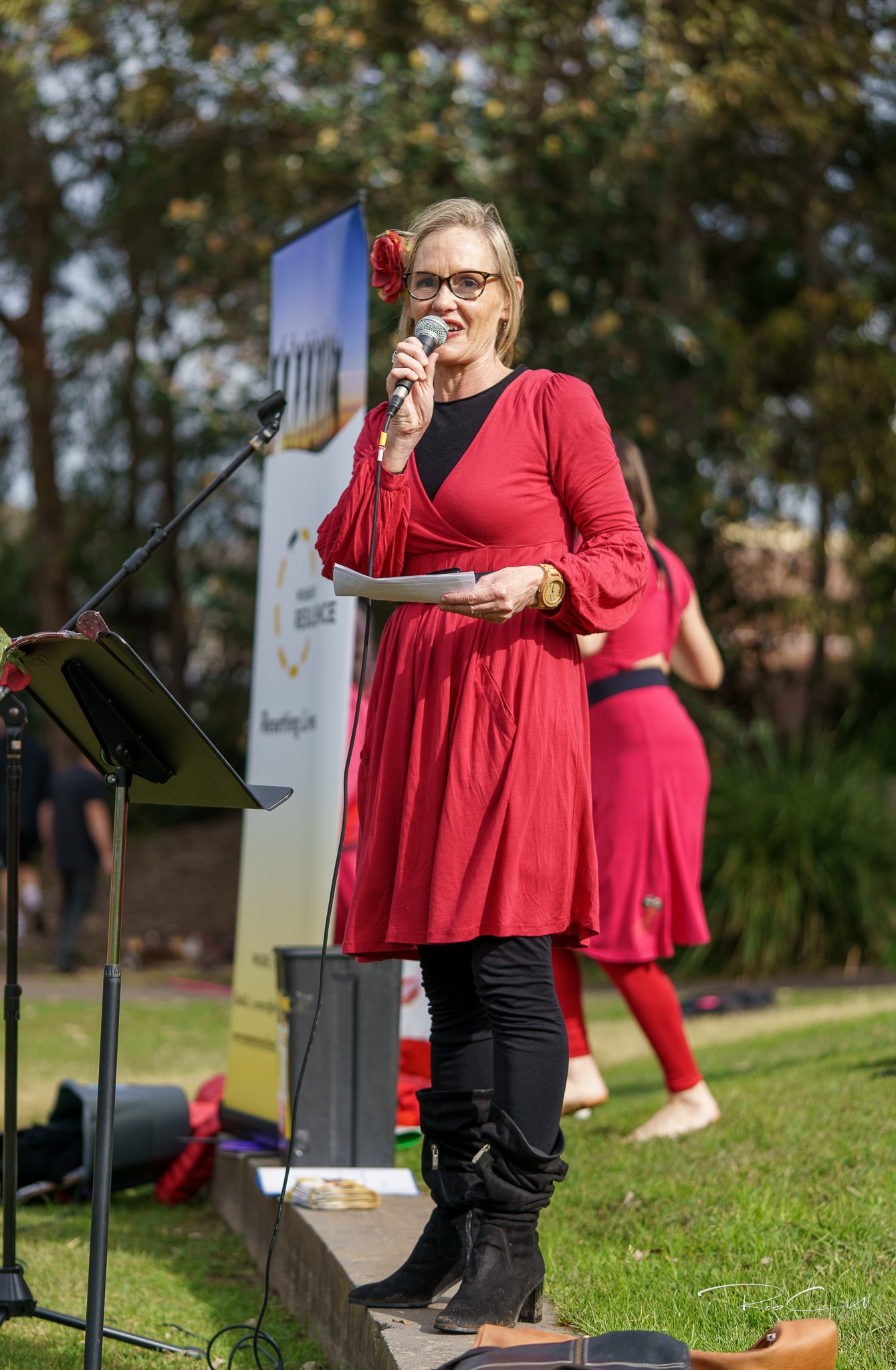 This good fun event to raise funds to support a local initiative to address a gap also shines a light on a serious problem that is happening here as much as it does anywhere else in Australia.

On Friday July 22nd 2022 the Australian Government held its first face-to-face meeting of federal, state and territory ministers to engage on key policy priorities for women. The meeting, co-hosted by the Minister for Women Katy Gallagher and Minister for Social Services Amanda Rishworth took place in Adelaide.

The meeting was set to  cover a range of important matters for Australian women, but focus particularly on gender equality, women’s economic security and women’s safety. The National Plan to End Violence against Women and Children 2022-2032 was discussed, along with a Commitment to a standalone National Plan for First Nations women.

Minister Gallagher said that it is imperative that the Commonwealth, state and territory governments work collaboratively to progress the Government’s national agenda of accelerating gender equality and achieving an end to violence against women and children.

“The Government is taking action to achieve gender equality, including through development of a National Strategy to Achieve Gender Equality. Our vision is for Australia to be a world leader in gender equality, and I look forward to working with states and territories on this ambition,” Minister Gallagher said.

“The Albanese Labor Government recognises that women’s experiences must be at the centre of decision-making and this meeting will be an important first step.”

Minister for Social Services Amanda Rishworth said the meeting is pivotal for reaching agreement with states and territories on the next National Plan. Establishing priorities for the new Domestic, Family and Sexual Violence Commission will also be key.

“Women’s safety is a high-order priority for me and the Government has committed to providing the focus and national leadership required to deliver change,” Minister Rishworth said.

“Already I have met with both advisory groups on the next National Plan and we are working in genuine partnership with First Nations communities in order to develop a dedicated plan for Aboriginal and Torres Strait Islander women and children. Next week’s meeting will only build on this important work.

“One woman dies in Australia every nine days at the hands of their current or former partner. The National Plan will set out a strategy for the next decade with the aim of reducing that number.”

From now on, Ministers responsible for women and women’s safety will meet regularly to maintain momentum and a national focus on these critical policy priorities for women.

After this year's event Elise said:

''Thanks so much to Crolly (Robert Croll Photography), Neil Andrews and Kate for the wonderful photos and thanks to everyone for coming along.

Huge thanks to LovLou and the Park House for donating the fabulous raffle prizes. Thanks to Karen for doing our Acknowledgment of Country, Kate Lush for MCing the Event, Andrew Black for the sound, Sascha, Liz and Kerry for fundraising at the AfterWuther.

Last but the most my wonderful husband Neil who filmed the event and has gone along with the idea of this for the last 12 months.''

Those gathered then practiced that special Kate Bush chorography for this song. Coincidentally, a new generation is discovering the music of Kate Bush, whose song, 'Running up that Hill' is currently sitting at Number one on the ARIA charts.

The 'Wutherers' had a few trial runs and then did that dance to that glorious tune.

Below run some of these great images. 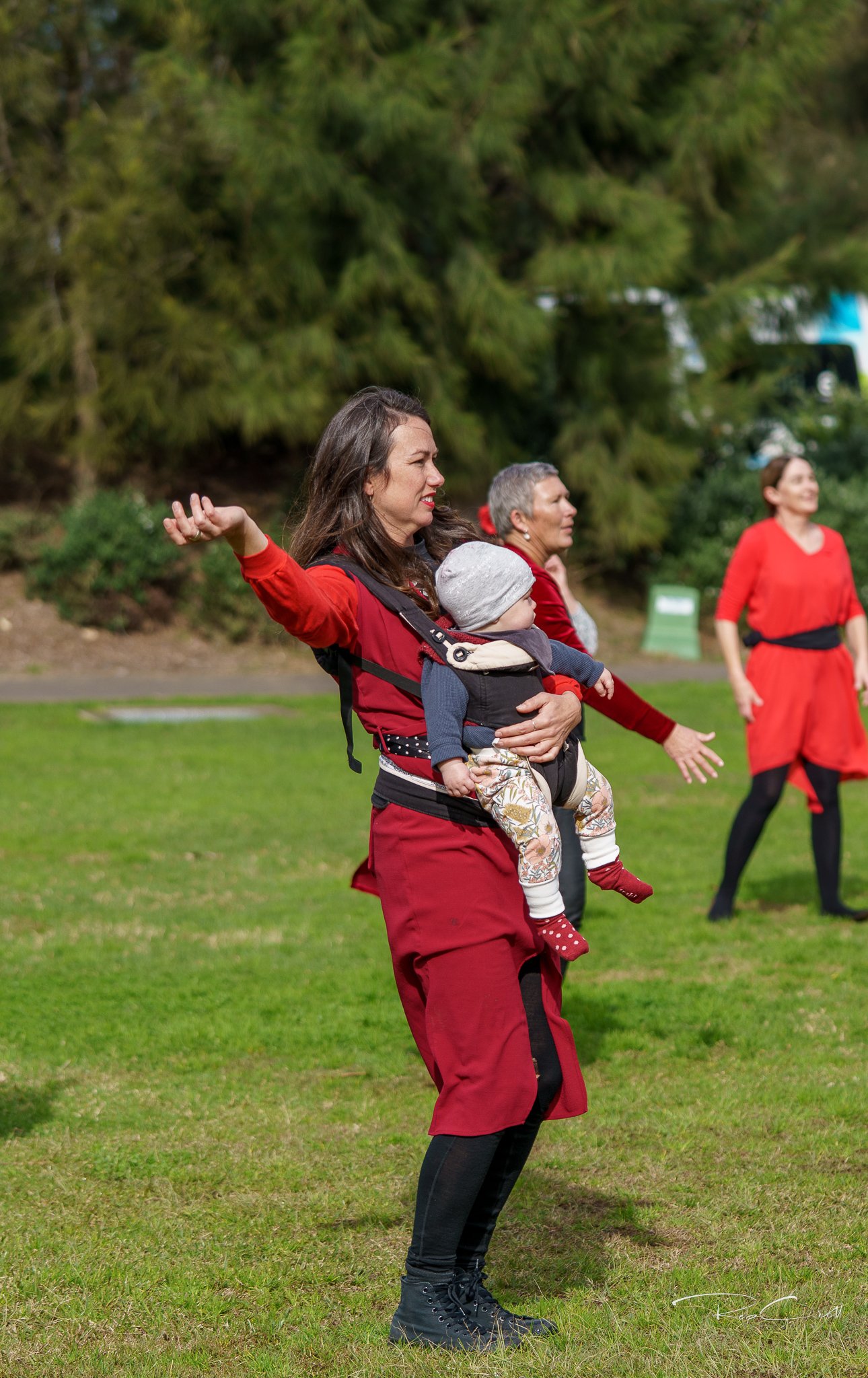 If you or someone you know needs help please contact: 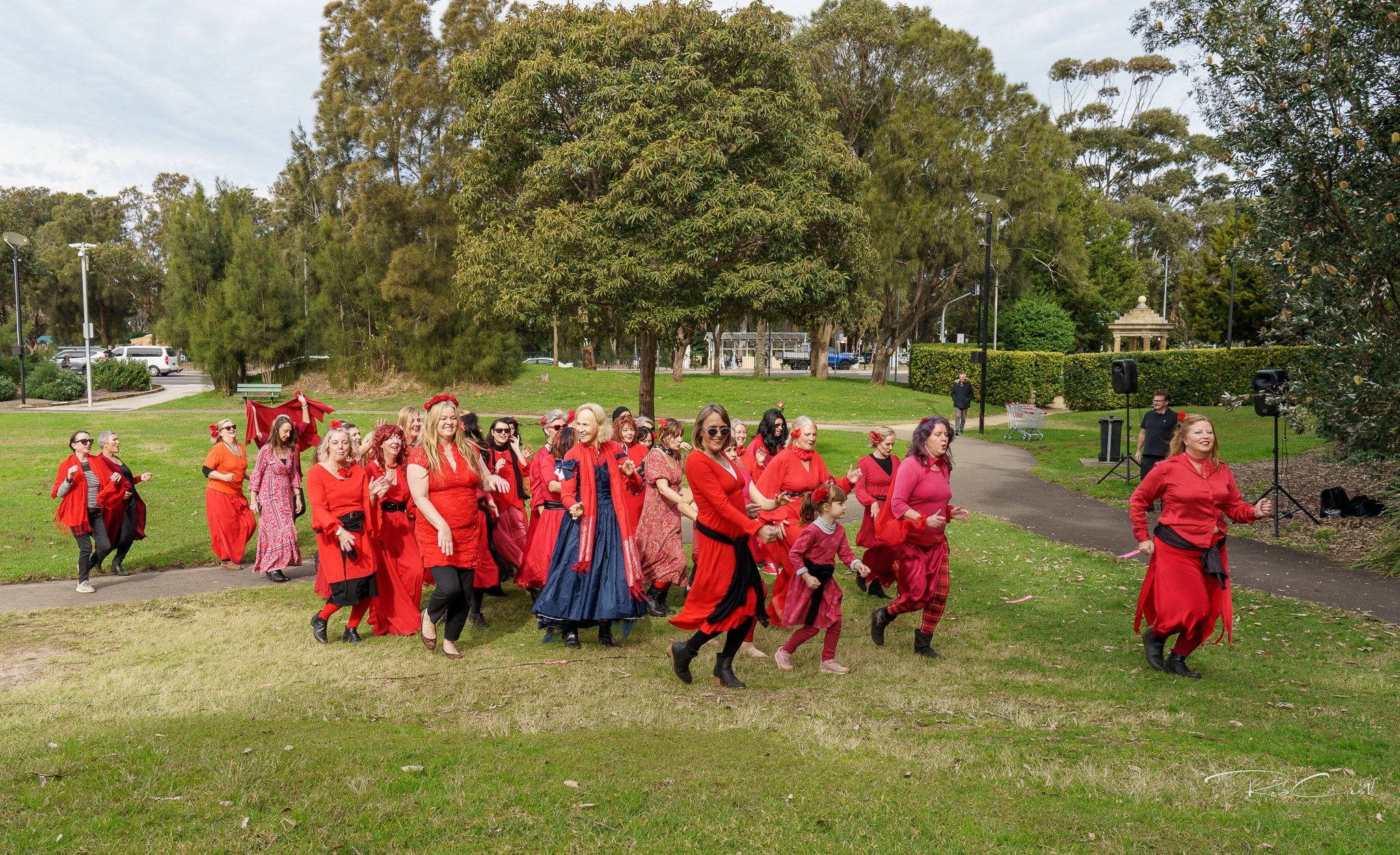 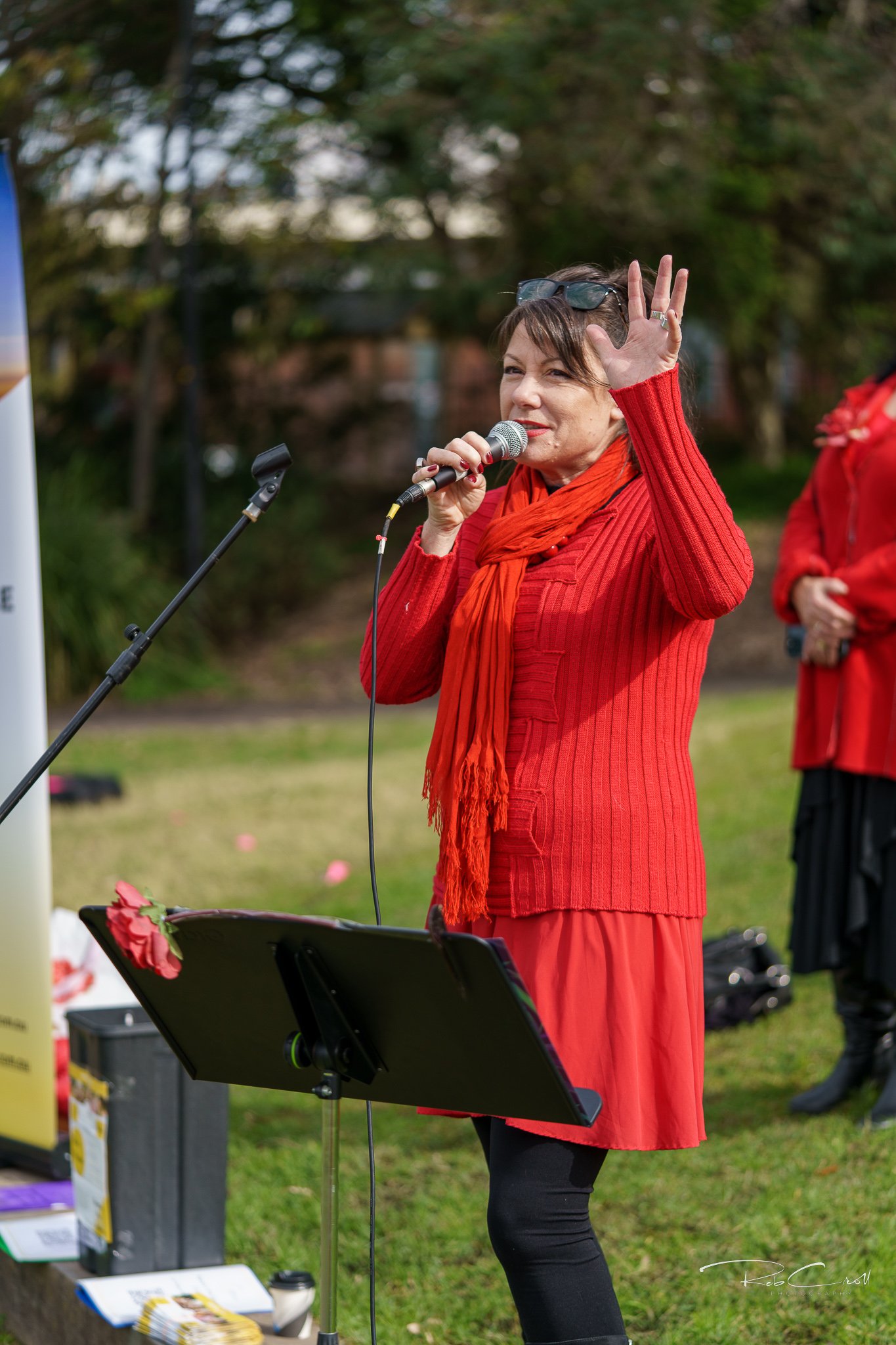 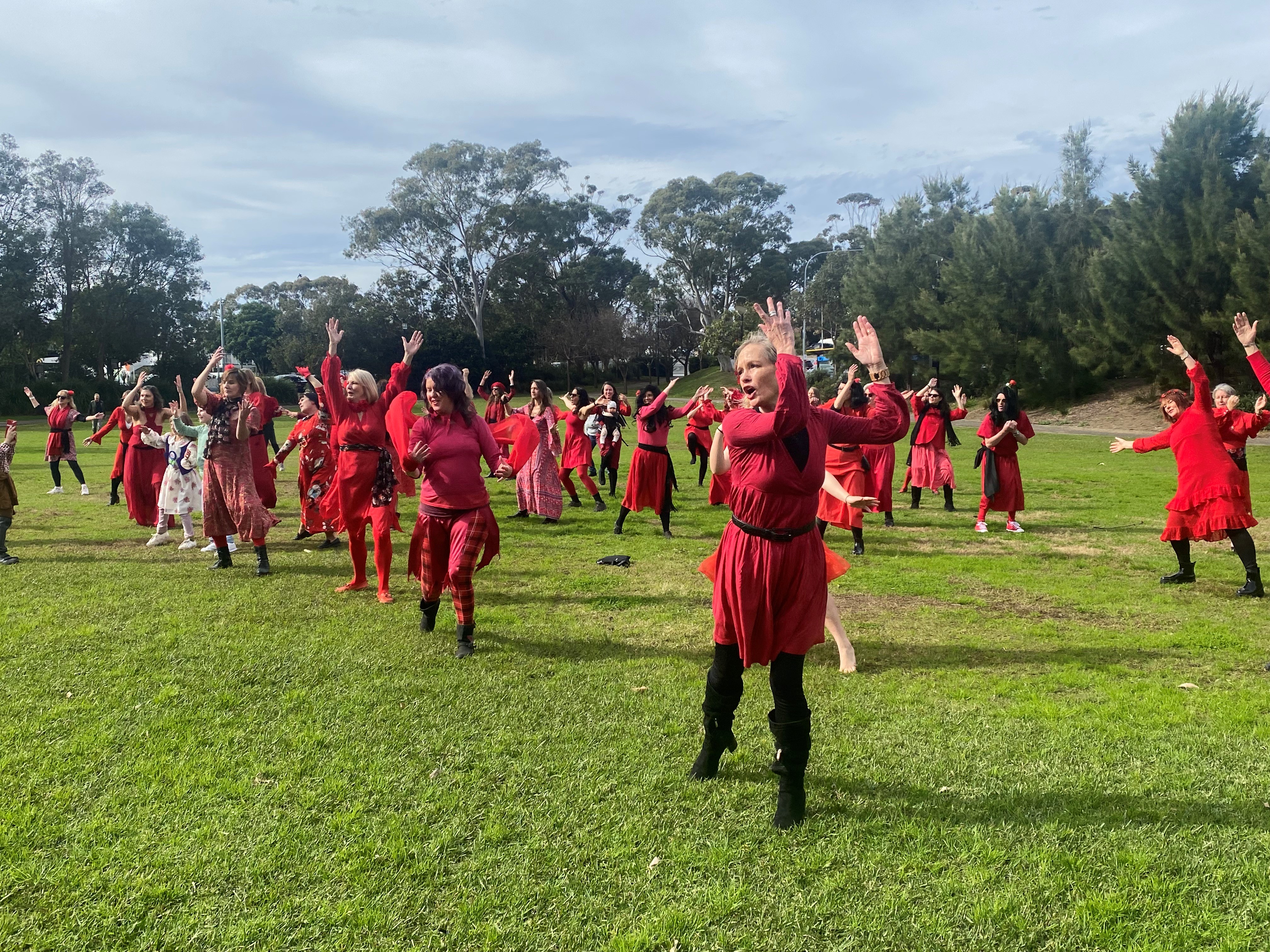 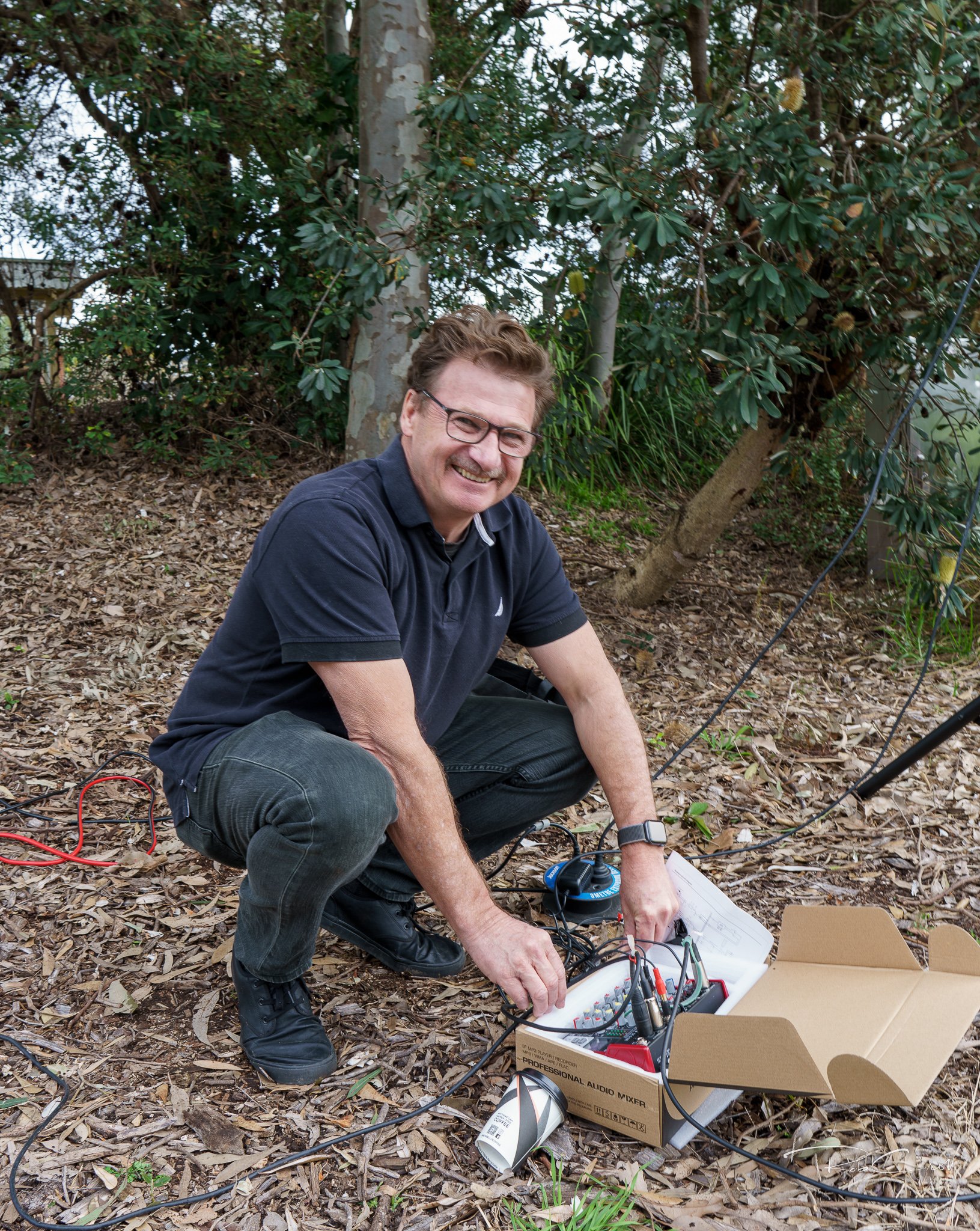 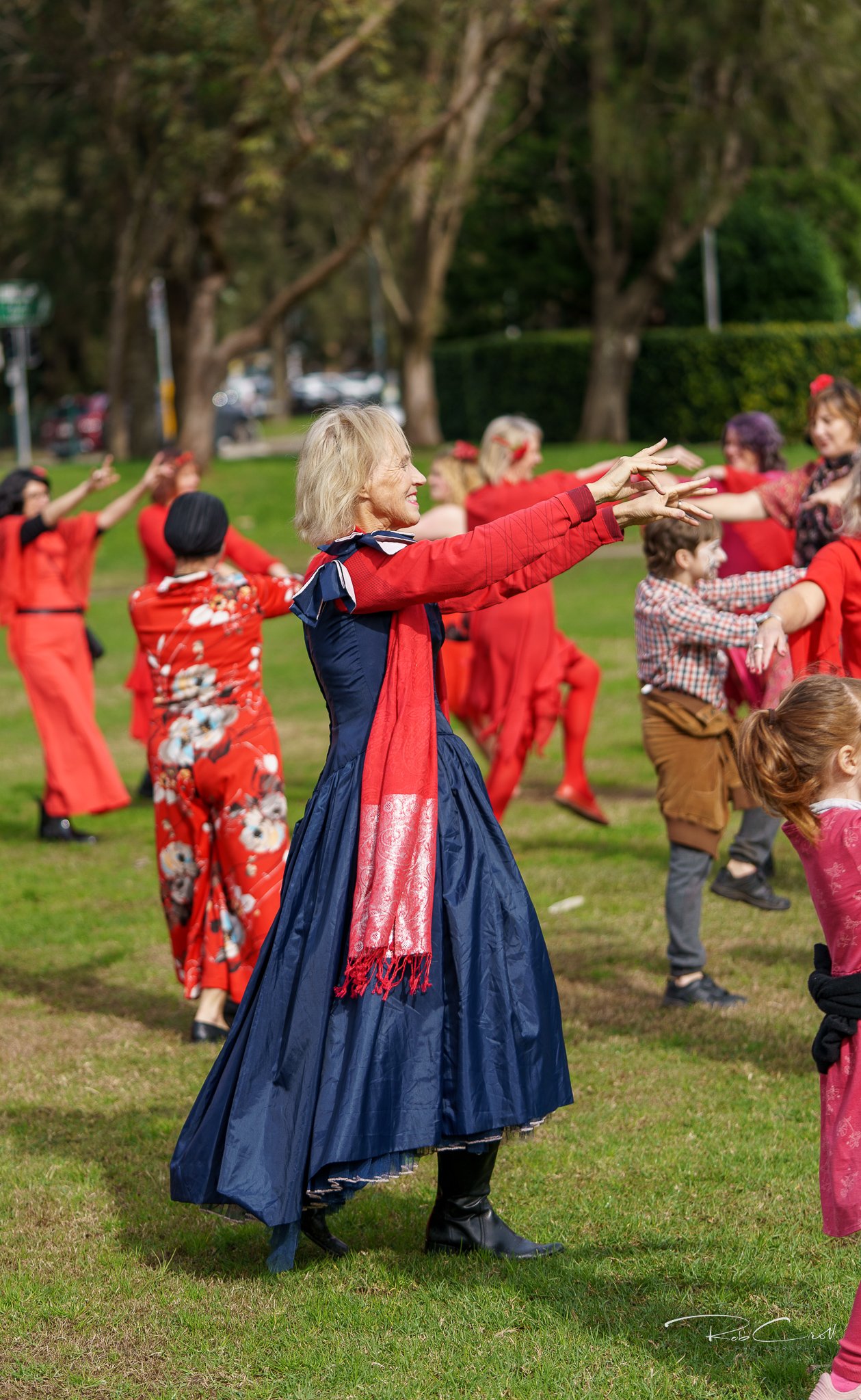 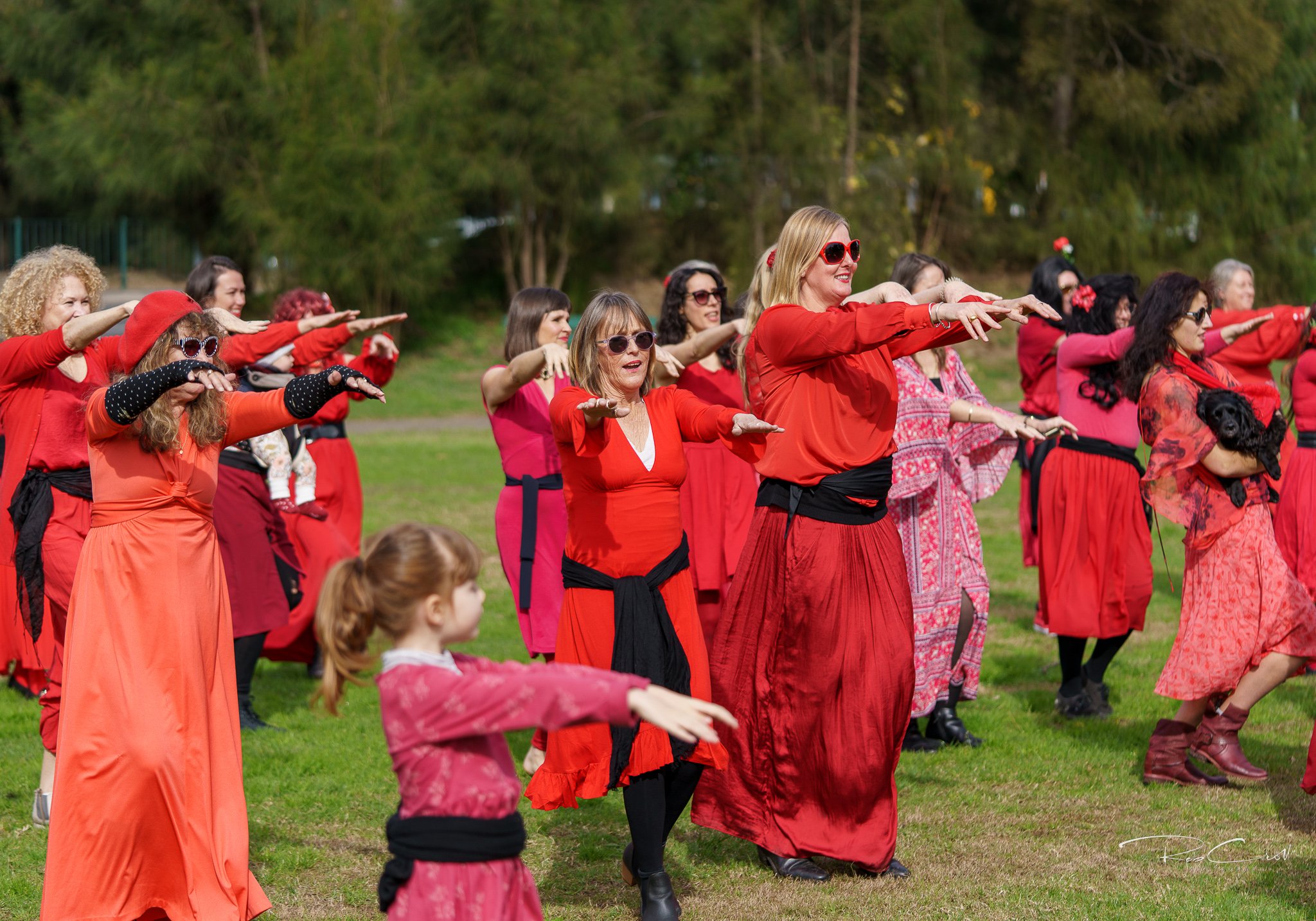 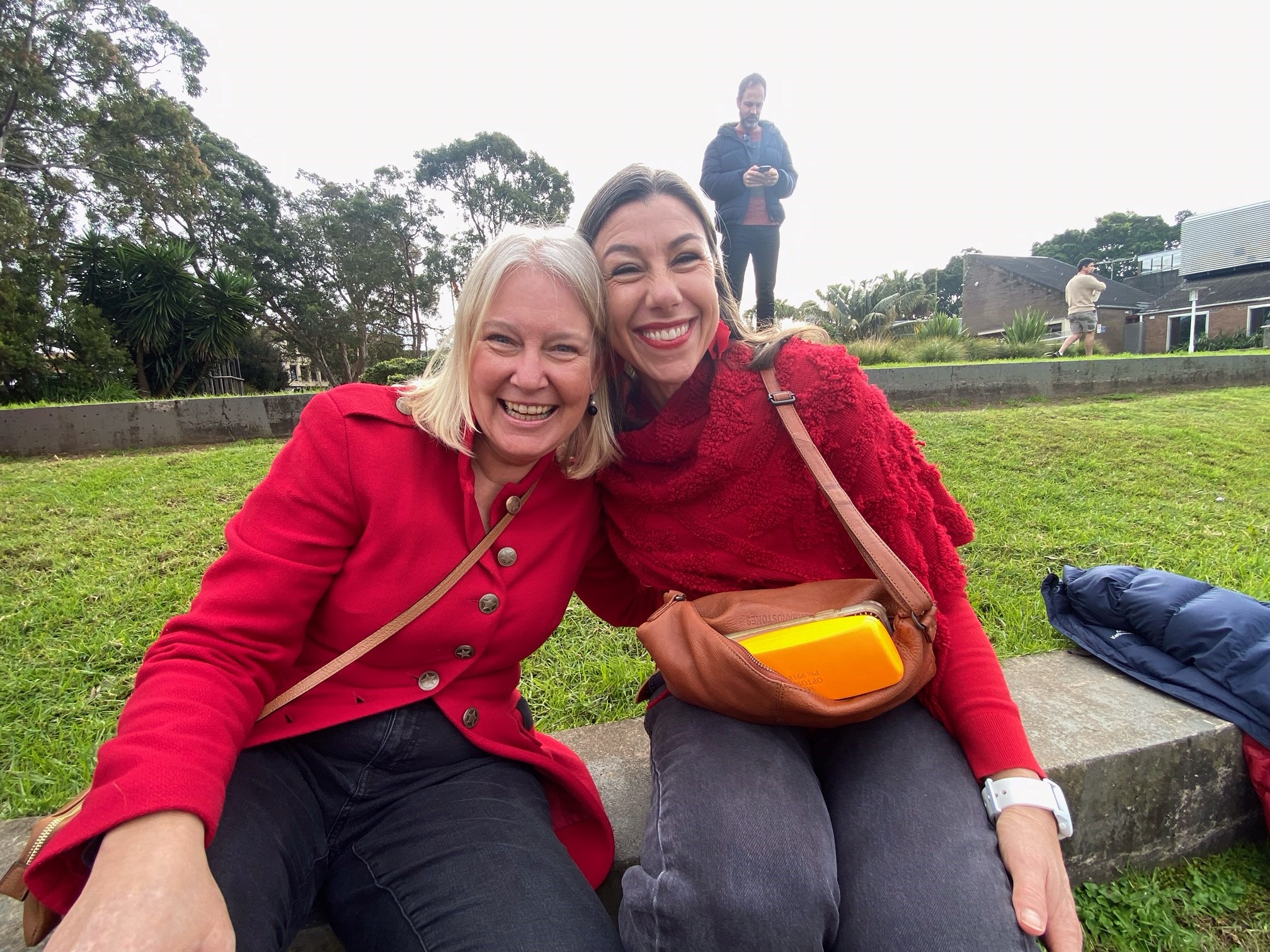 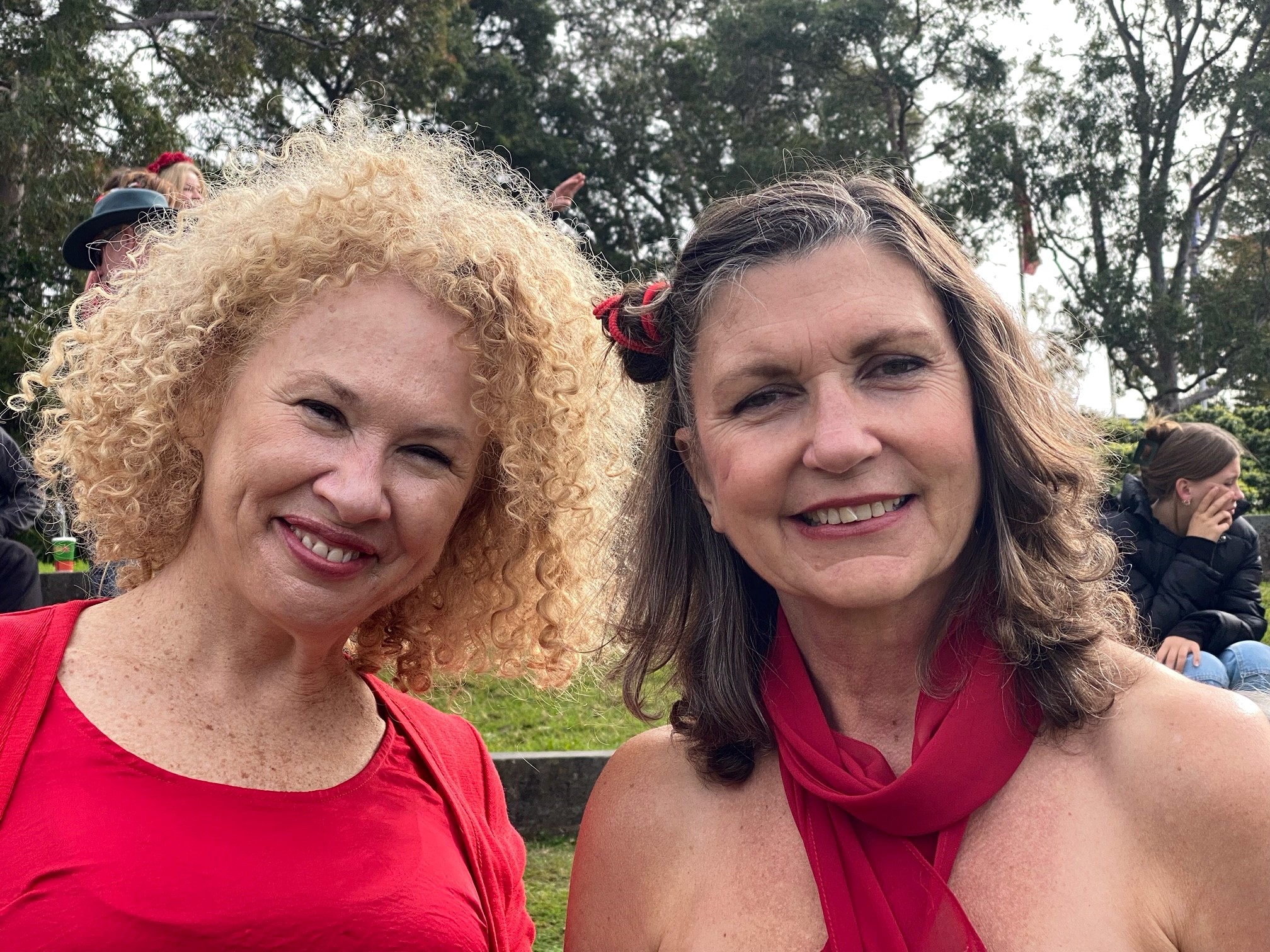 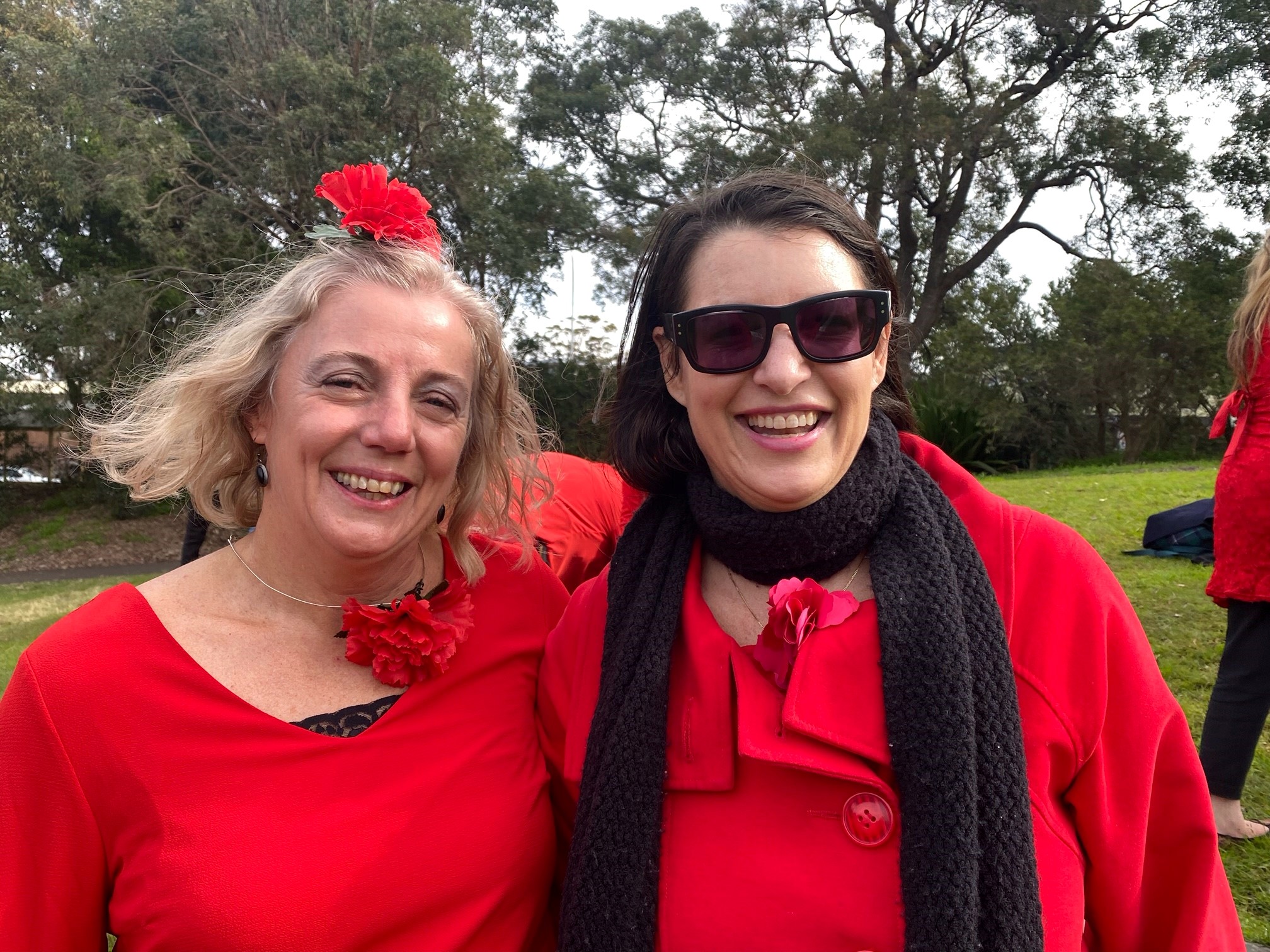 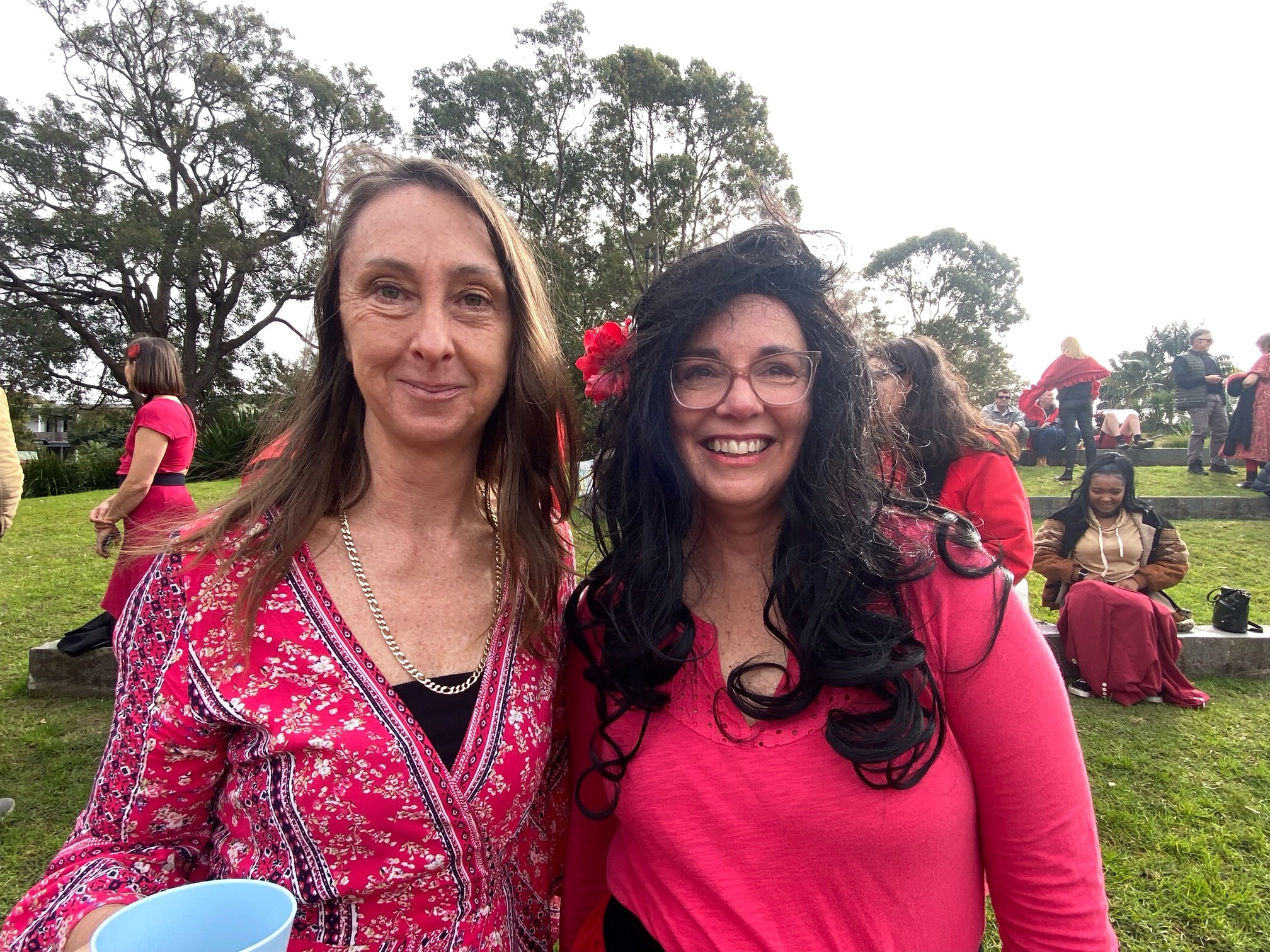 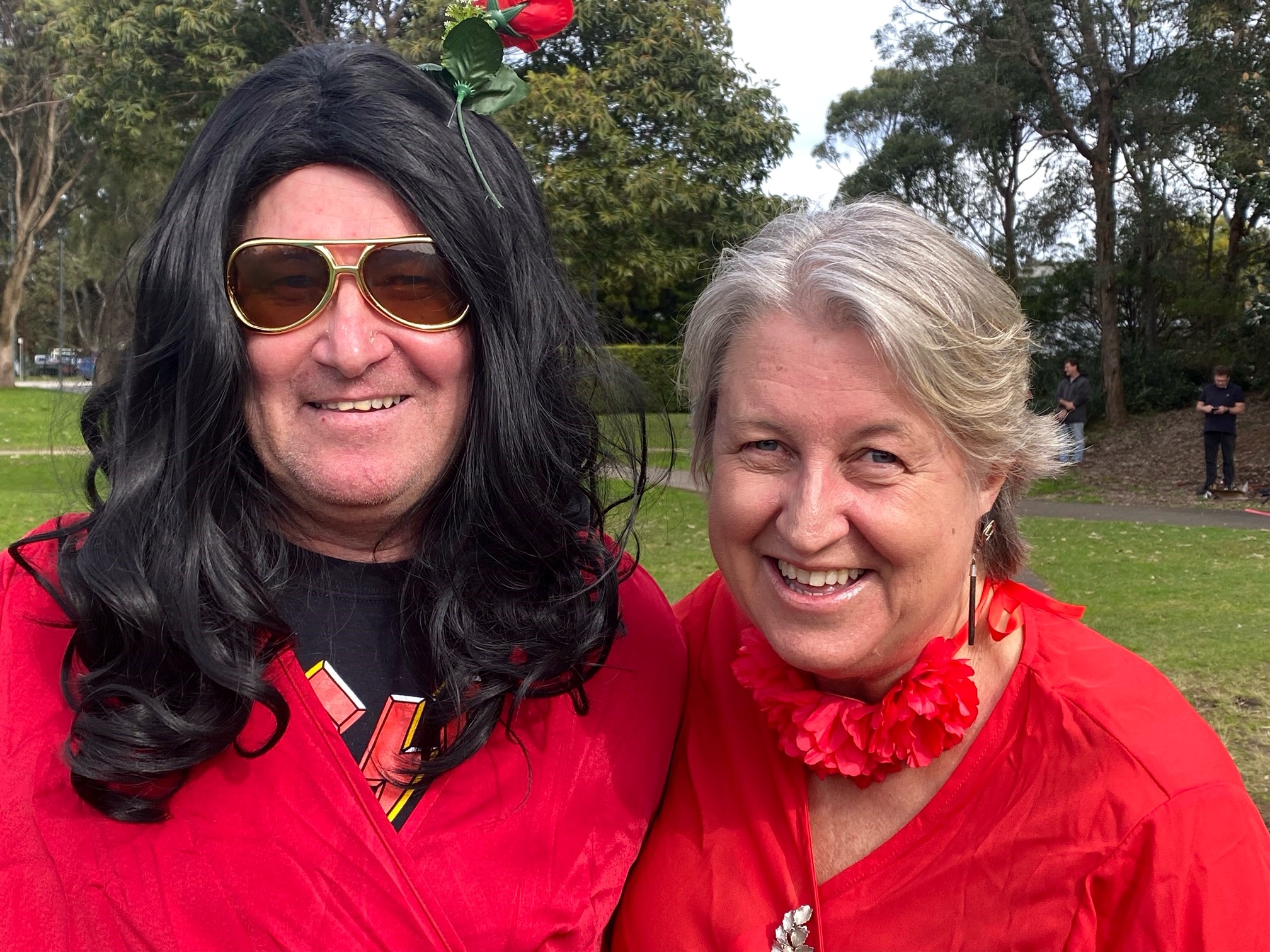 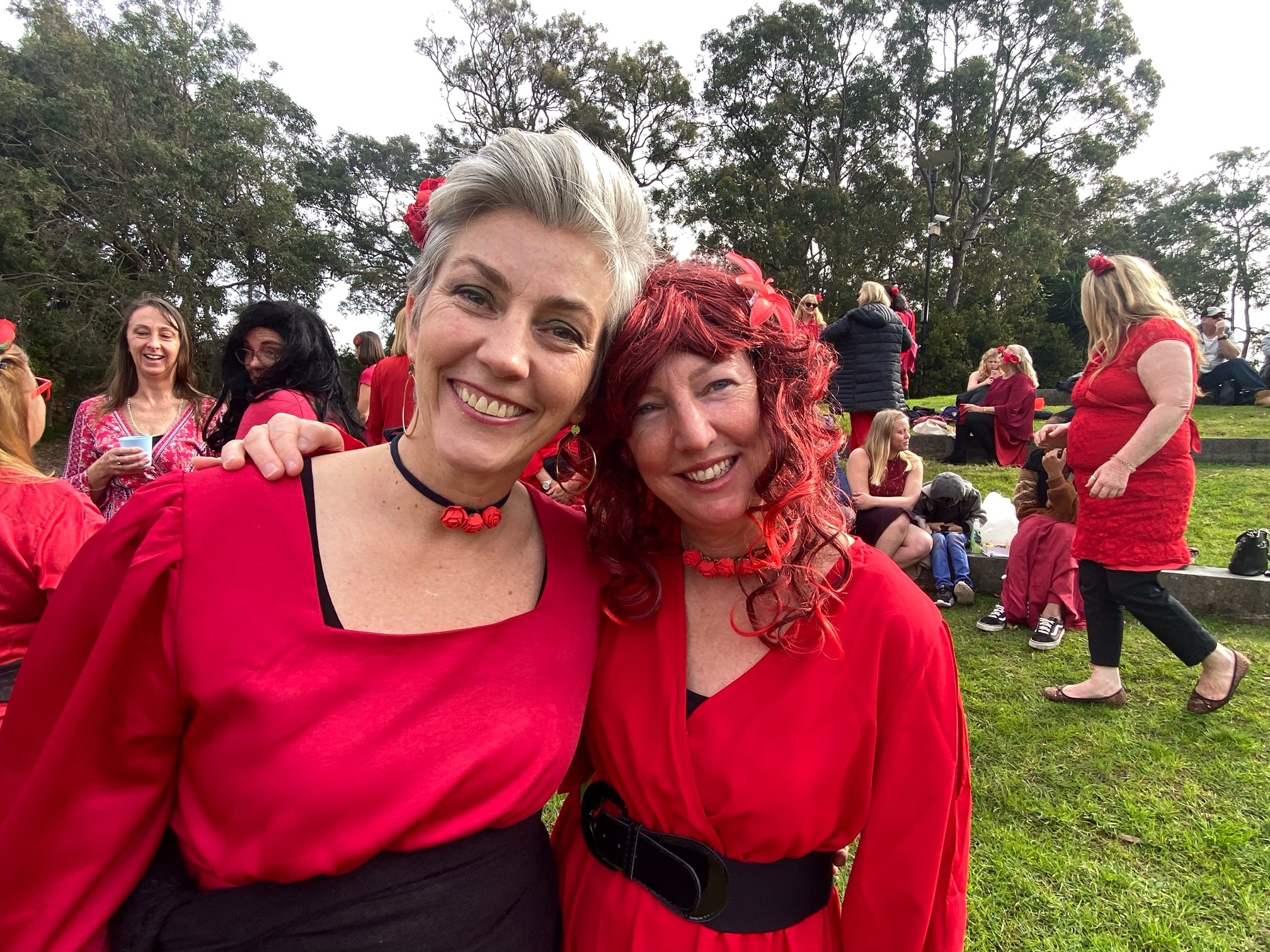 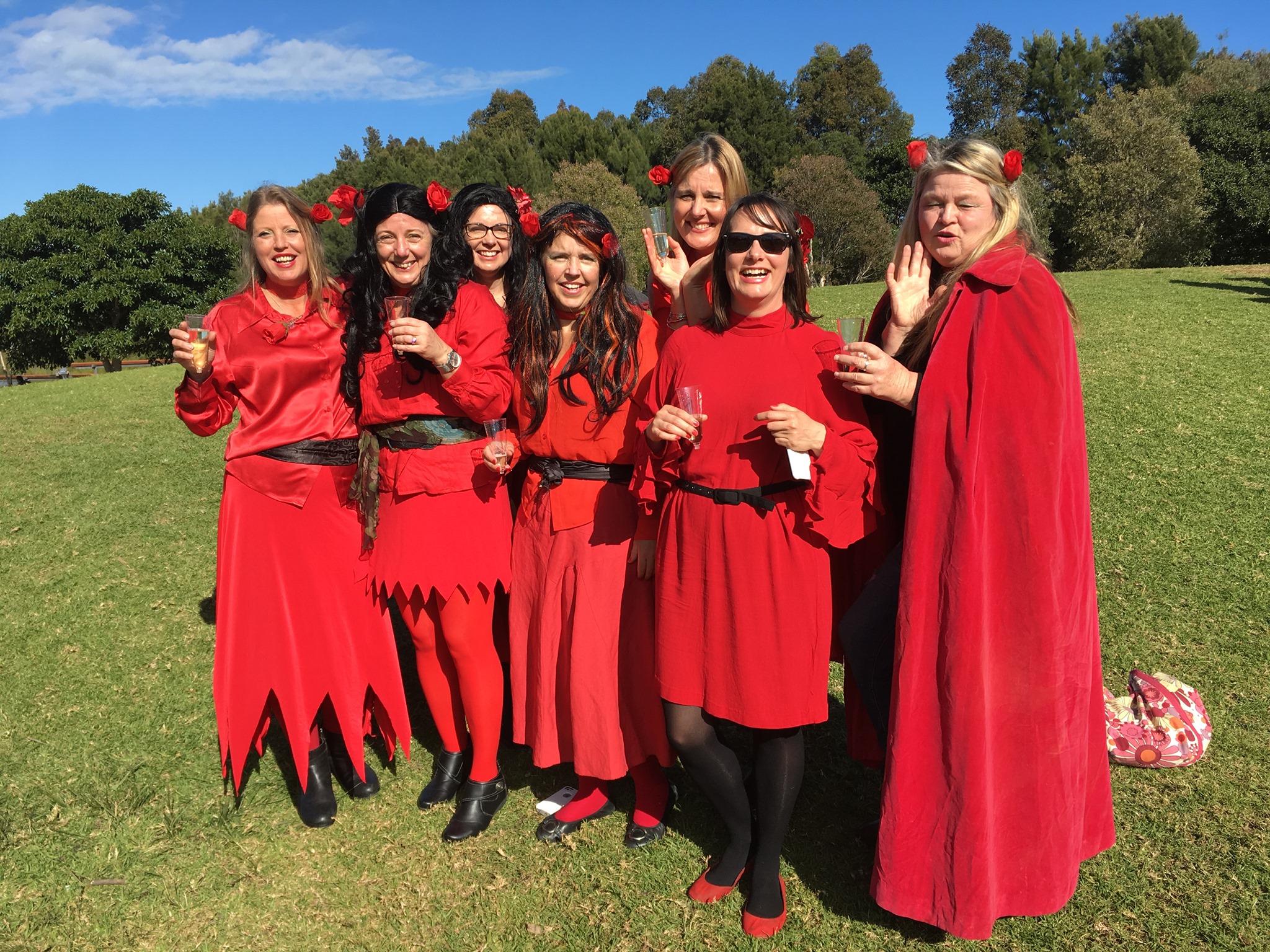 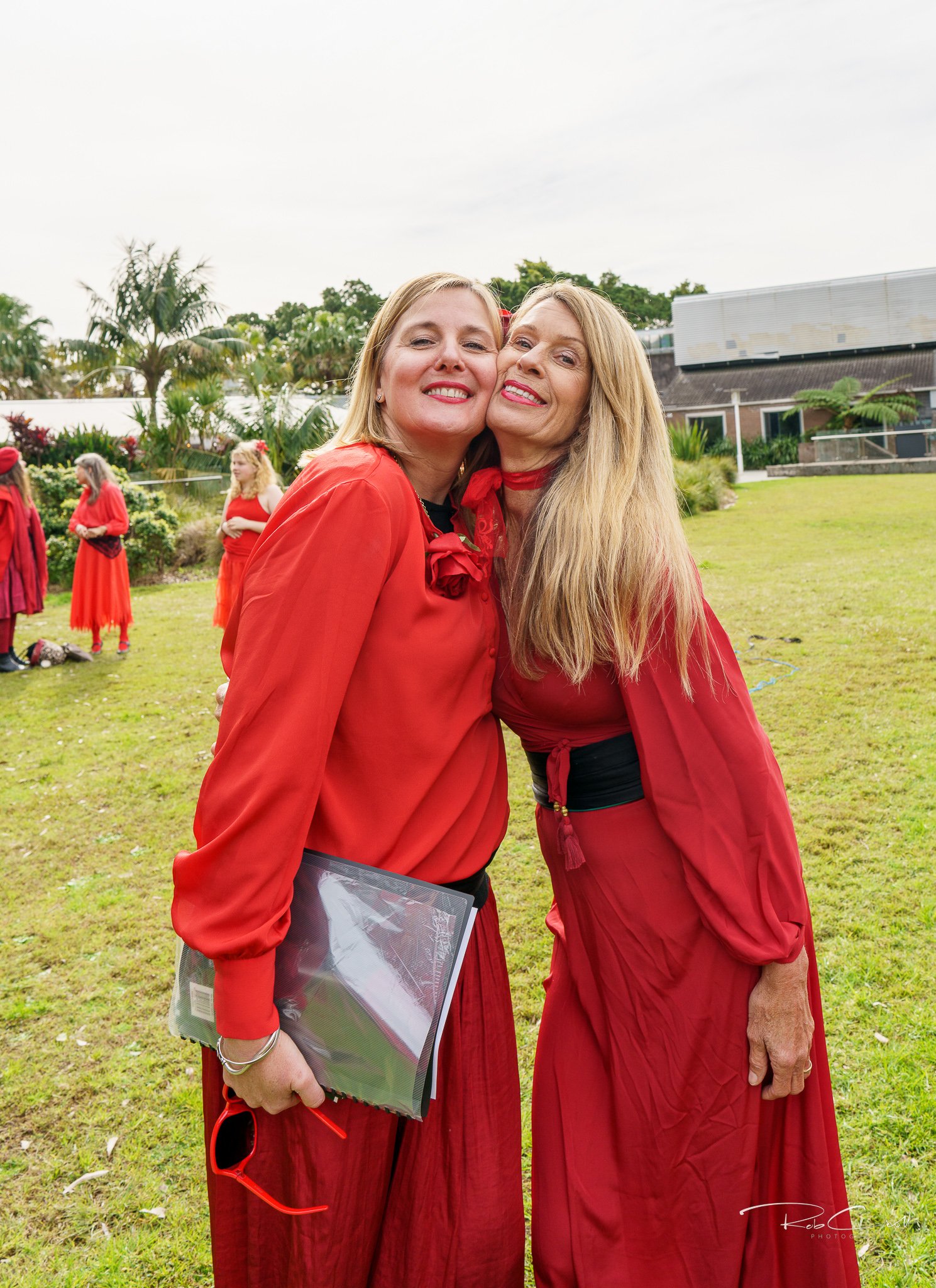 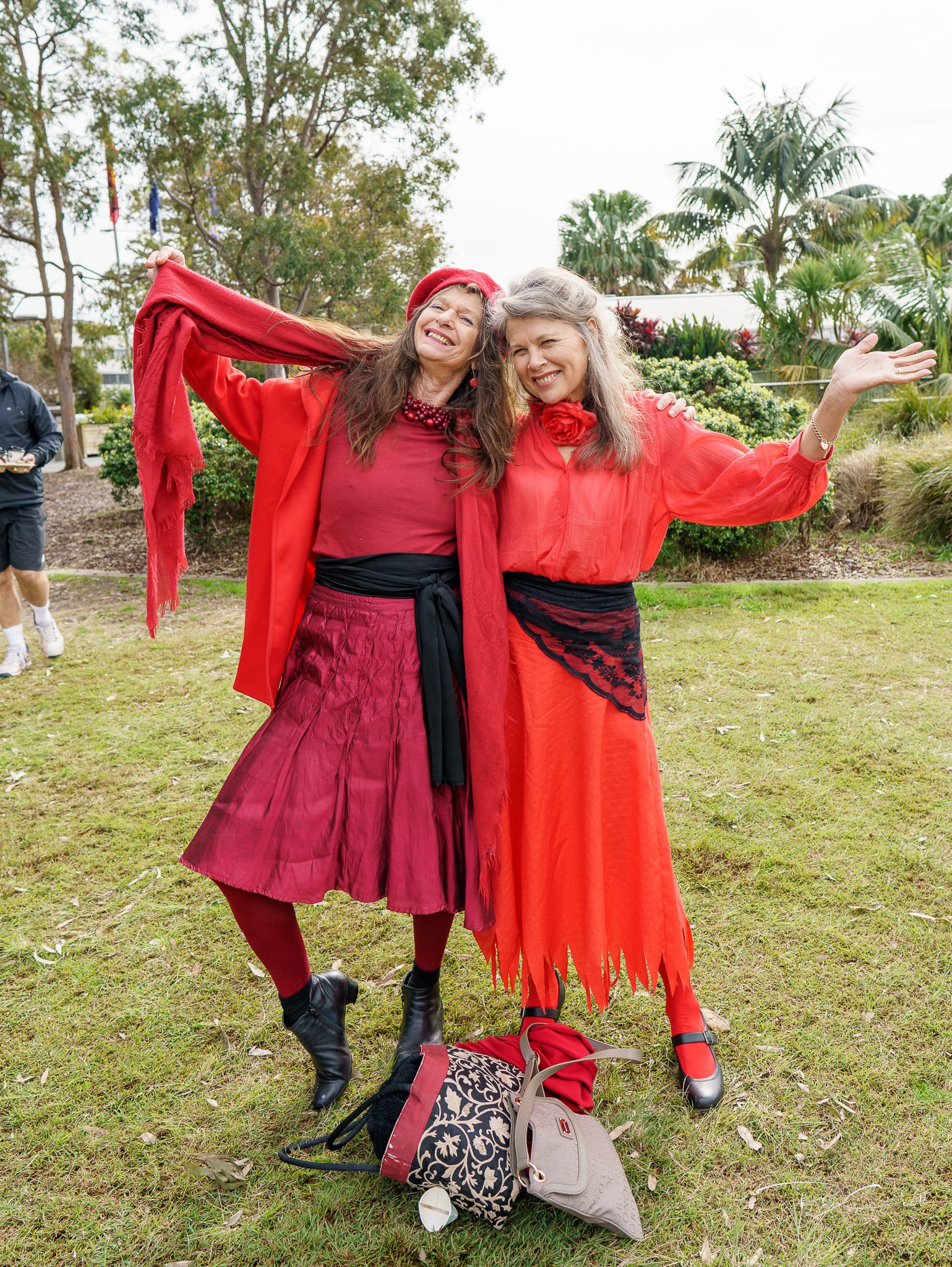 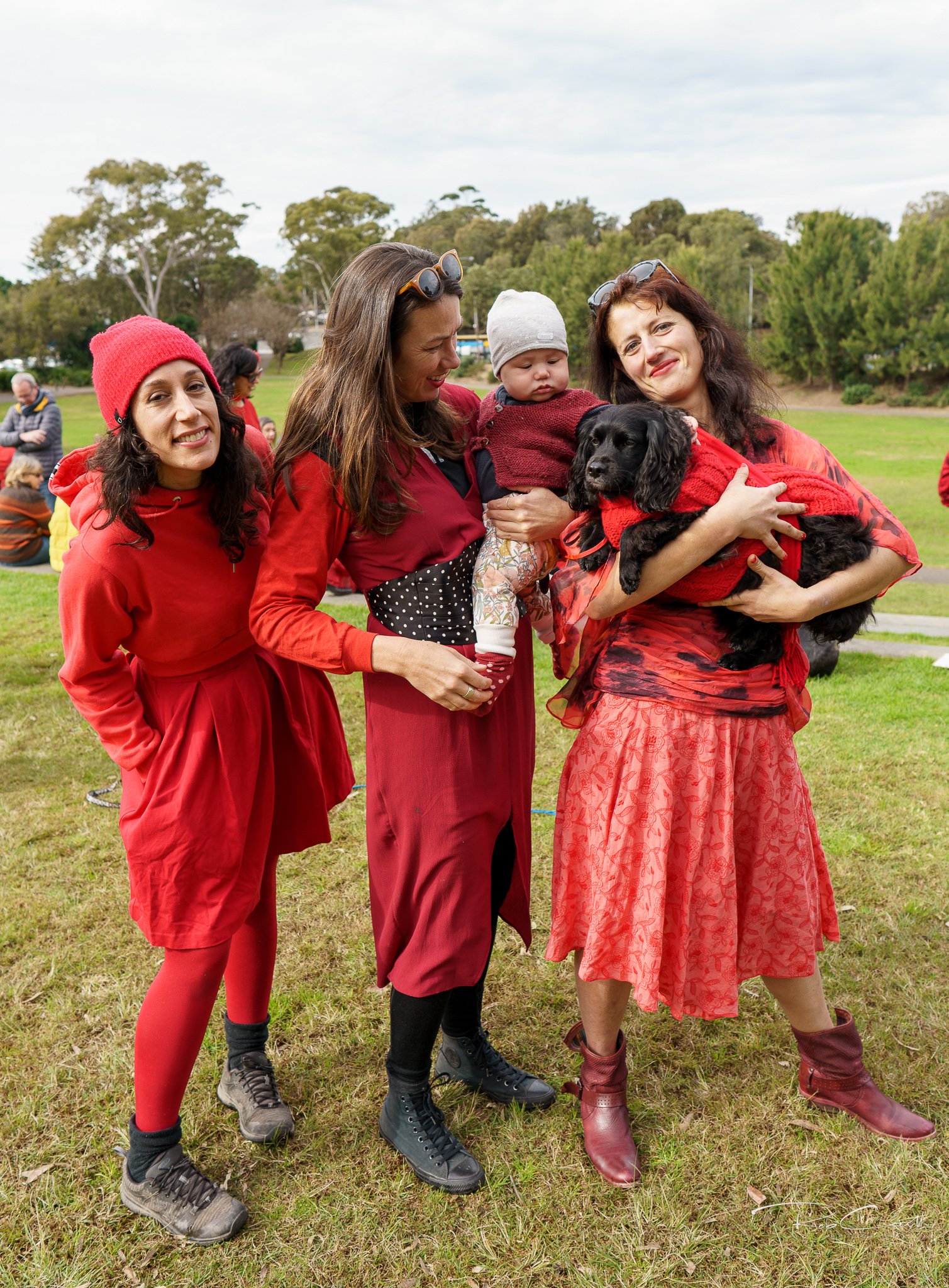 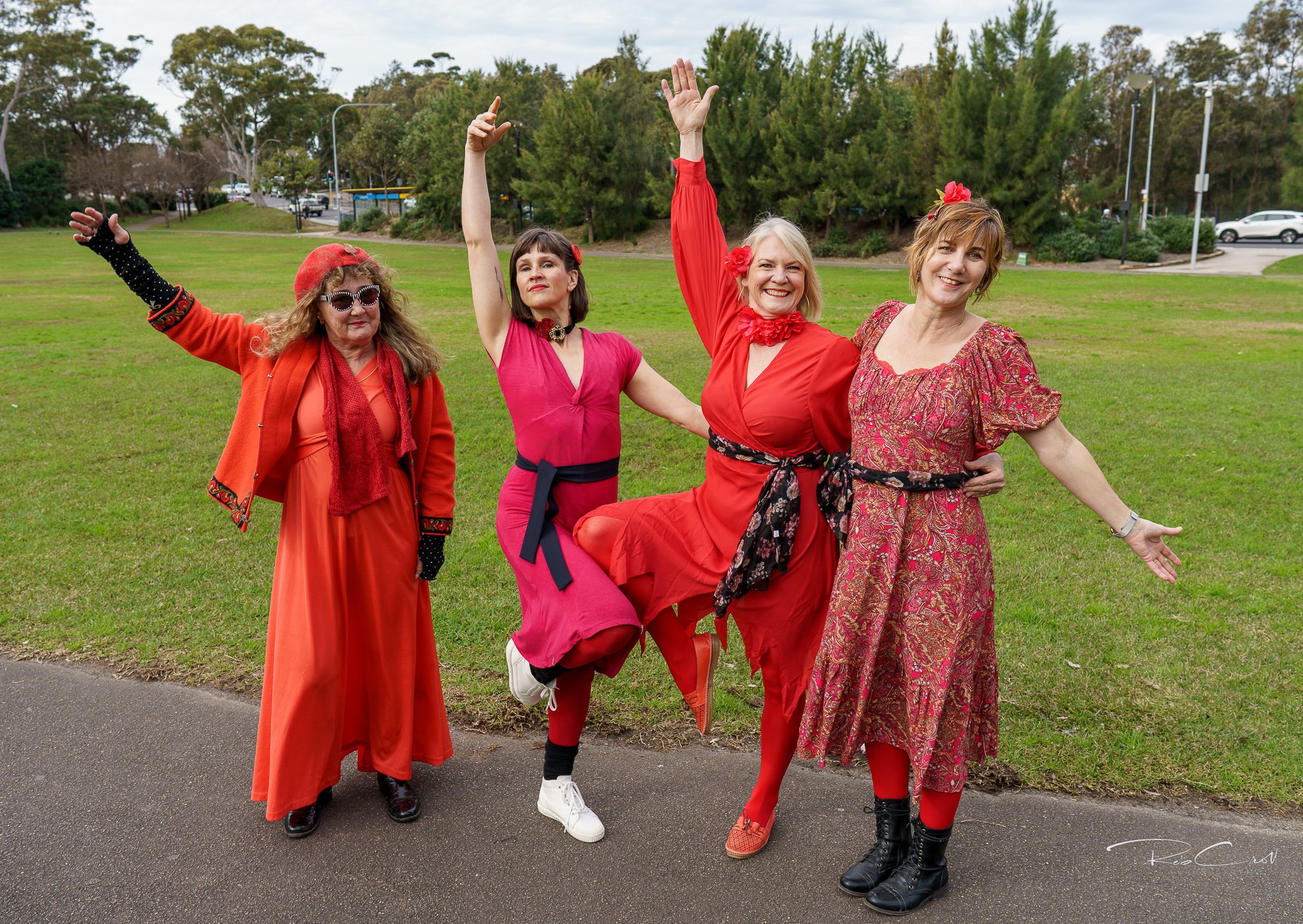