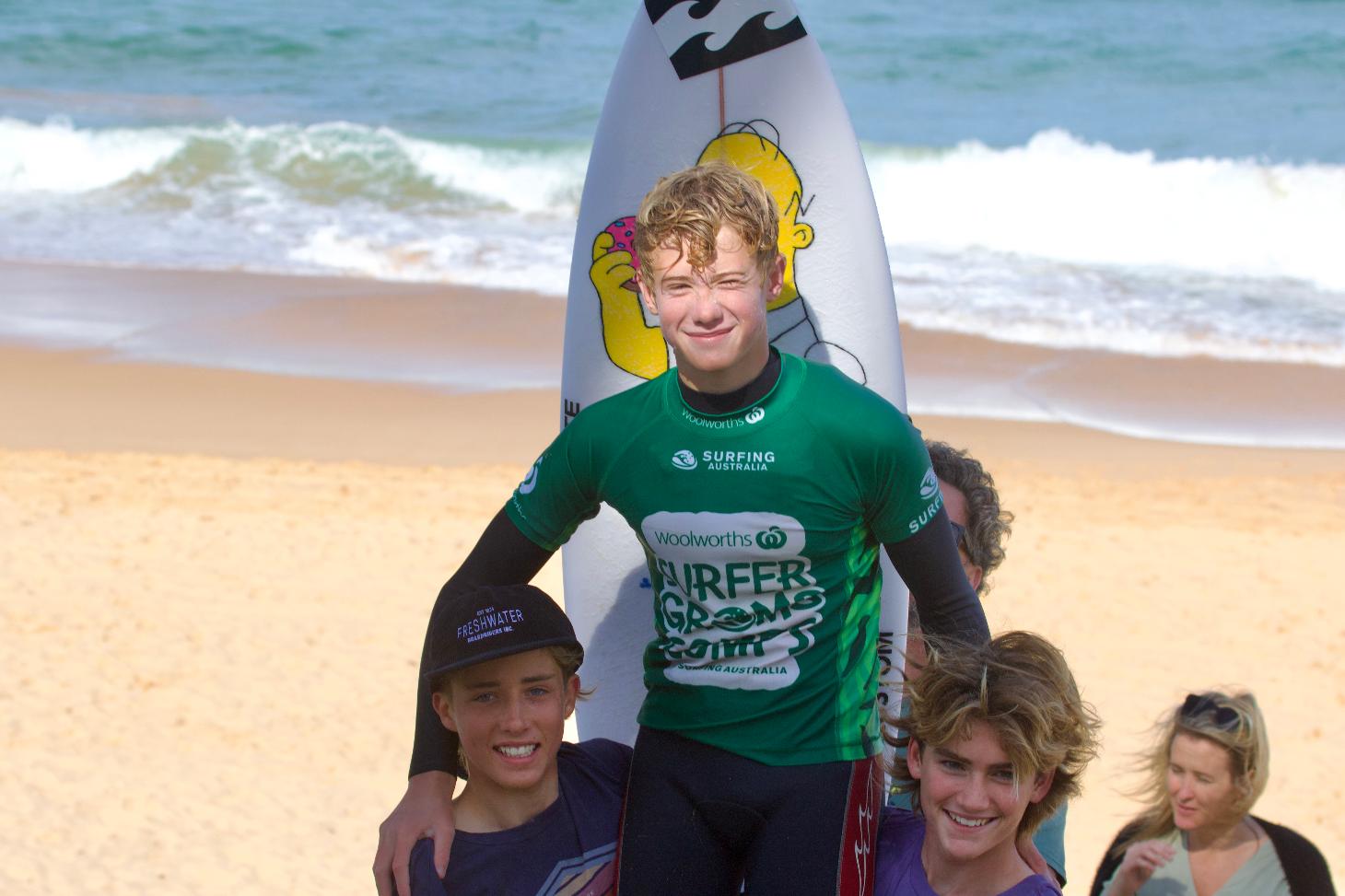 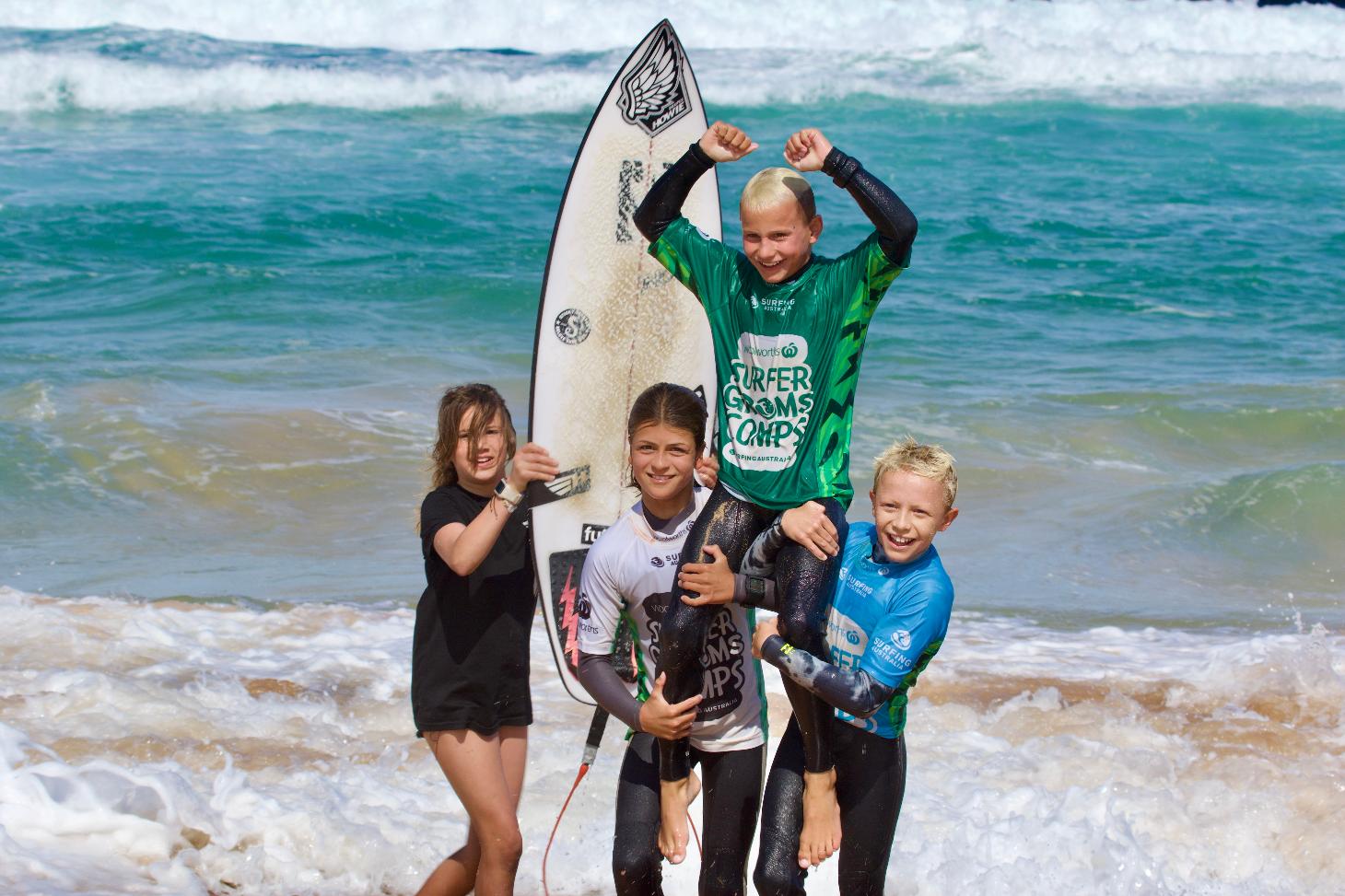 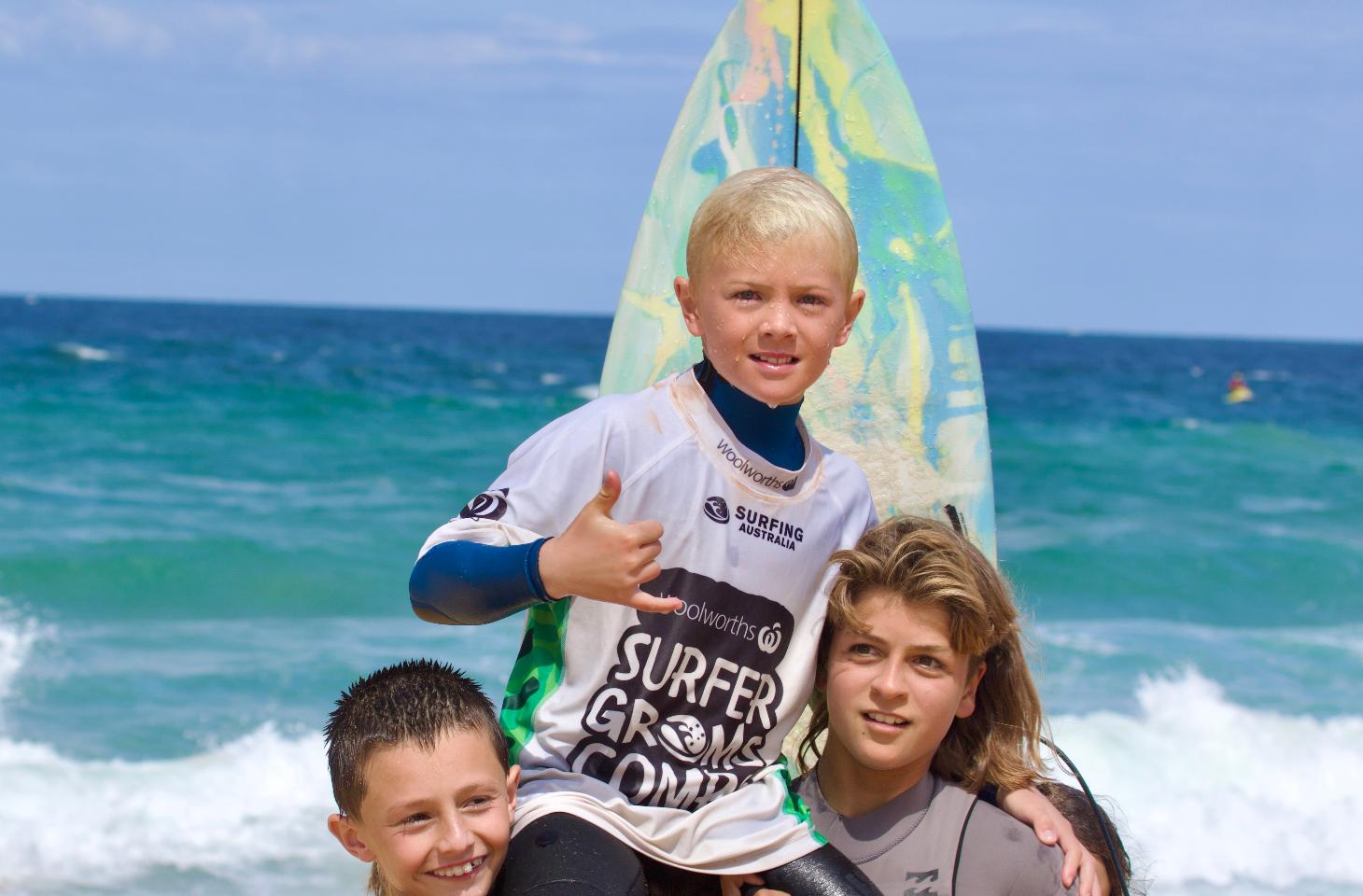 Stop three out of four of the NSW Based Woolworths Surfer Groms Comp Series wrapped up on Sunday October 16th in what started as fun conditions that turned challenging as the onshore breeze started blowing around mid morning. The Northern Beaches round is the fifth event in this popular annual grom comp.

On the Saturday (October 15th) component of the two day event, the Woolworths Surfers Groms comp headed to Curl Curl Beach in some fun 3-foot waves. On what was an amazing day of surfing, the groms were able to show their full range of skills.

In the second heat of the Under 10 Girls, Coco Woolley (Boomerang Beach, NSW) went from strength to strength.  Despite only catching three waves, they all scored above a 7-point ride.  This was sufficient for her to win the heat with a 14.60 two-wave total, progressing on through to the semi-final where she will now come up against the top-ranked competitor Mila Grainger (Newport, NSW).

Fresh from competing earlier in the day at Bondi in The Volkswagen Australian Open of Surfing, Poppy O’Reilly (Bondi) headed north to make her round 2 heat just in time to lock in a couple of waves, and more importantly progress on through to the next round.

Maverick Macgugan (Avalon, NSW) showed style and poise beyond his years as he took down some stellar competition in his opening-round heat. The stylish natural footer linked together a multitude of turns to claim the heat win. Macgugan was looking to bring this stylish performance through to the quarter-finals.

Day 1 of the Woolworths Surfer Groms finished up with the highly contested Under 12 Boys. Locana Cullen (Avalon) and Jaggar Phillips (Maroubra) are both looking to cement their spot at the top of the 2022 National Rankings. The talented goofy footers both progressed through their quarter-final heats with the surfers locking in two wave scores above 13.00 range. Cullen and Phillips look to set up a finals clash tomorrow with both surfers on the opposite sides of the draw from one another.

The youngest competitors got things underway for the finals day, Sunday, again at Curl Curl. Leading the charge in the Under 8 Mixed divisions was Taylor Bartlett (Manyana). Bartlett was able to find the open face walls to link a couple of turns together, being rewarded with a 5.33 single wave and putting him well on his way to the win.

Talia Tebb (Avoca) notched up her fourth win in the 2022 calendar year taking out the Under 12 Girls and solidifying her spot at the top of the 2022 National Junior Rankings. Tebb continued her impressive form in the challenging conditions scoring one of the highest single waves for the ladies with a 6.33 ride.

In an extremely close final in the Under 10 Girls, it was Alani Morris (Shelly Beach) who came out victorious over Coco Woolley (Boomerang Beach), Everly Morgan (Milton) and Mila Grainger (Newport). The girls were nearly inseparable at times with just 0.24 separating first to third. Morris was able to lock in the highest single waves of the heat with a 5.8 ride which was enough to put the young Central Coast surfer in the lead.

In the highly anticipated Under 12 Boys, it came down to the battle of the backup scores between Locana Cullen (Avalon) and Jaggar Phillips (Maroubra). Phillips started with an early lead, posting a 6.33 single wave before Cullen answered back with 7.07, following it up with a 5.63 to go on and takeout the final.

Earning their spot at the all-expenses-paid, three-day Woolworths Surfer Groms Comps Under 14 National Final Surf Camp was Poppy O’Reilly (Bondi). O’Reilly snatched the final in the dying minutes away from Lani Cairncross (Kiama). Needing a 3.2 single wave O’Reilly was able to post a 3.87 to earn her spot in the National Final.

It was a similar song in the Boys with Rene Galloway's (Newport) last ditch effort was enough to secure the win. Galloway was able to post the highest wave score in the final with a 6.73 on his way to victory.

As an added bonus, the respective winners of the Under 14 boys’ and girls’ divisions from each event will receive an invite to attend an all-expenses-paid, three-day Woolworths Surfer Groms Comps National Final Surf Camp, (1-day coaching clinic, two days of competition and heat analysis coaching) at the Surfing Australia High-Performance Centre (HPC). For the South Australian, Victorian and Tasmanian events, the Woolworths Surf Camp prize will be awarded to the highest place Under-14 Boy and Girl who reside in that respective state