On Saturday January 27th, and hosted by the Pittwater yacht club renowned for focusing on fun (the WPYC) the annual Putt Putt Regatta and Gentleman's Launch race takes place on the day after Australia Day, shifted from that date due to traffic on the estuary making racing unsuitable.
The Gentlemen's Launch was scheduled to start at 11 am, the Putt Putts soon after. This year this was a staggered start from Treharne Cove, around Scotland Island anti clockwise.
Afterwards there is always a barbecue on the beach with cooling drinks available and some fun - such as tug-of-war and other games. There are prizes for the best dressed boat, many dressed up to a theme, and best dressed crews on these, as well as other prizes and the trophy for 2018.
A few years ago we had the good sense to seek out this band of straight-talking people who clearly don't take themselves too seriously - what they do take seriously, and pursue in Summer and Winter Sailing Calendars, is enjoying Pittwater. Their original Charter, although they do have an official one too, gives you the gist of the spirit inherent in the Woody Point Yacht Club:
WOODY  POINT YACHT CLUB CHARTER
Purpose:
This document aims to define the objects of the Club so that its original concept may not be lost or diluted with the passage of time and/or Members, nor fundamentally   changed  in  any  way. Persons  desiring  otherwise  are  free  to choose from numerous other boating clubs which may better serve their requirements.
Activities:
Founding  Members of the Woody  Point Yacht  Club were a dedicated group of social  drinkers  with  a   boating  problem.   Their   motivation   was  and  is  the enjoyment of the Pittwater and its inhabitants,  largely facilitated  by craft giving access to the remote foreshores and to the water itself.   Suitable craft included tinnies,  yachts, putt-putts,  work  boats,  in fact  anything  that floats  - and  even some vessels whose buoyancy is questionable.
These craft provide a platform for the many and varied pastimes enjoyed by Members,  including  fishing, yachting,  putt-putt  regattas, picnics, parties, breakfasts, etc.
The Club  does not favour  a particular  past time so long as a boat is involved either as a means to an end (ie. transport, fishing) or an end in itself (ie. sailing, cruising, just messing).
The Club has a penchant for all things traditional - timber boats in particular - and prefers the simple family orientated atmosphere inherent in our unique community.
Constitution:
A Commodore shall be elected  by popular vote at the Annual  General Meeting together  with other office bearers  as required.   A Committee  of five Members shall   be  responsible for organising all functions during the year. The camaraderie shared by Members is such  that  'rules' in  the normal  sense  are inappropriate and any semblance of formality is purely for the entertainment such pomp and ceremony usually provides.
However, to maintain a friendly and intimate atmosphere, club membership shall be limited to 100 persons in any year on a first come first served basis. The club does not discriminate, even ladies and Kiwis are eligible to join. Senior citizens (capable of pulling beer) may also join and hold office.
_________________________
The WPYC Putt Putt Regatta is known statewide, with members receiving an invitation in 2017 to be part of the Davistown Putt Putt Regatta, one of the early (1900) and reintroduced regattas that takes place on Brisbane Water as part of Gosford Regattas. Putt-putt boats usually range in length from 14-18 feet and are powered by either single or twin cylinder 2 to 10 hp Blaxland/Chapman, Simplex or Clay inboard petrol driven engines all of which make the vary familiar 'putt-putt' exhaust sound.
The WPYC prides itself on its fleet of wooden classics in all forms of vessels from the small to the bigger than that, many with a history linked with Pittwater and the still undeveloped offshore areas.
Sue Carter is the current Commodore of the Woody Point Yacht Club, backed up by stalwarts such asScotty Taylor, Vice-Commodore, and Ian Major. If this is a club you'd want to be part of, Membership details can be found here.
Penny Gleen, Church Point Ferry Service, had the historic Elvina out and had a run against two other wooden classics, the Karoo and historic Reliance, another classic ferry still to be seen on the Pittwater.
Penny posted afterwards, "Thanks for the race Adrian Matthews, Jane Matthews, and Mark Farrell."
Jools Farrell and Penny both kindly shared some photos they took.
One image caught by Penny reminds of one found and run on purpose because it reminded us of a younger Pittwater and the Elvina, and even looked like Pittwater may have looked then when a page on the Elvina was shared a few Issues back. There's something about that Samuel Hood picture, a man who was a regular visitor to Pittwater, which makes you think you're looking at our offshore areas in that background - it captures the 'feel' of then, and now - a certain something that's been retained by our offshore idylls and ideals.
Just goes to show this place is a vision and getting to be part of such fun, while keeping it laid-back and among great people, is what the WPYC Putt Putt Regatta is about - every year!
It's a Classic!
That picture - Photo by Penny Gleen
The Elvina - all dressed up and ready to go - Photos by Penny Gleen
The Reliance, getting ready to race - Photo by Penny Gleen
They're off and racing! - Photo by Jools Farrell
The Karoo, gaining ( Karoo is a 27 foot custom carvel planked timber cruiser, built 1949, complete rebuild 1988)  - Photo by Penny Gleen
The finish line, we beat them by a nano second!!! - Jools Farrell ( MV Reliance came 3rd overall!) - Photo by Jools Farrell
Gathering on the beach afterwards for some food and fun - Photo by Jools Farrell
Miss Tessa a bit tired after a day of fun on the water but so are we, great day had by all on the Woody Point Gentlemens Putt Putt Race!
- Jools Farrell 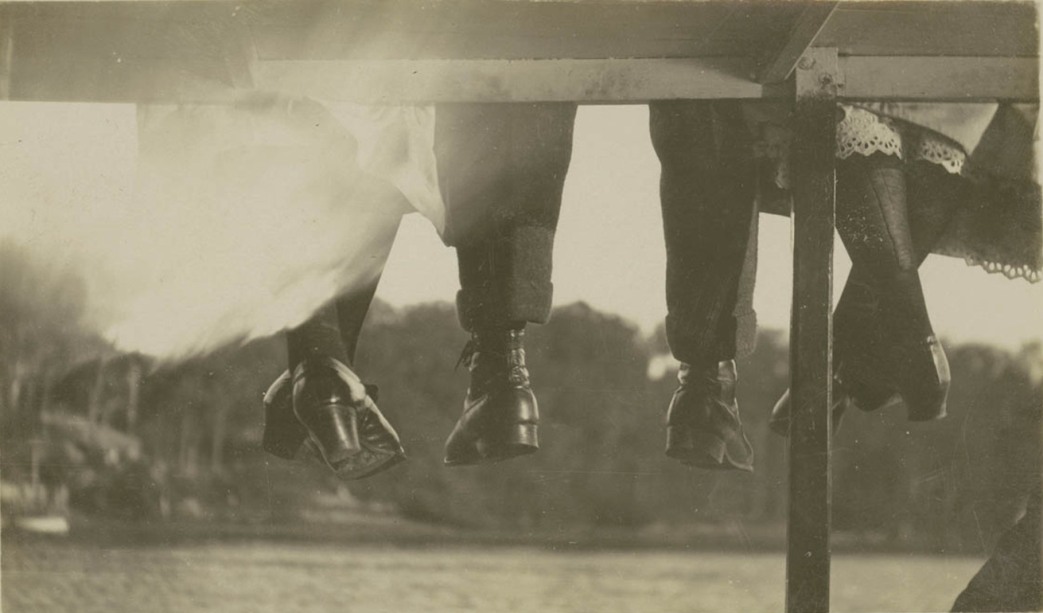