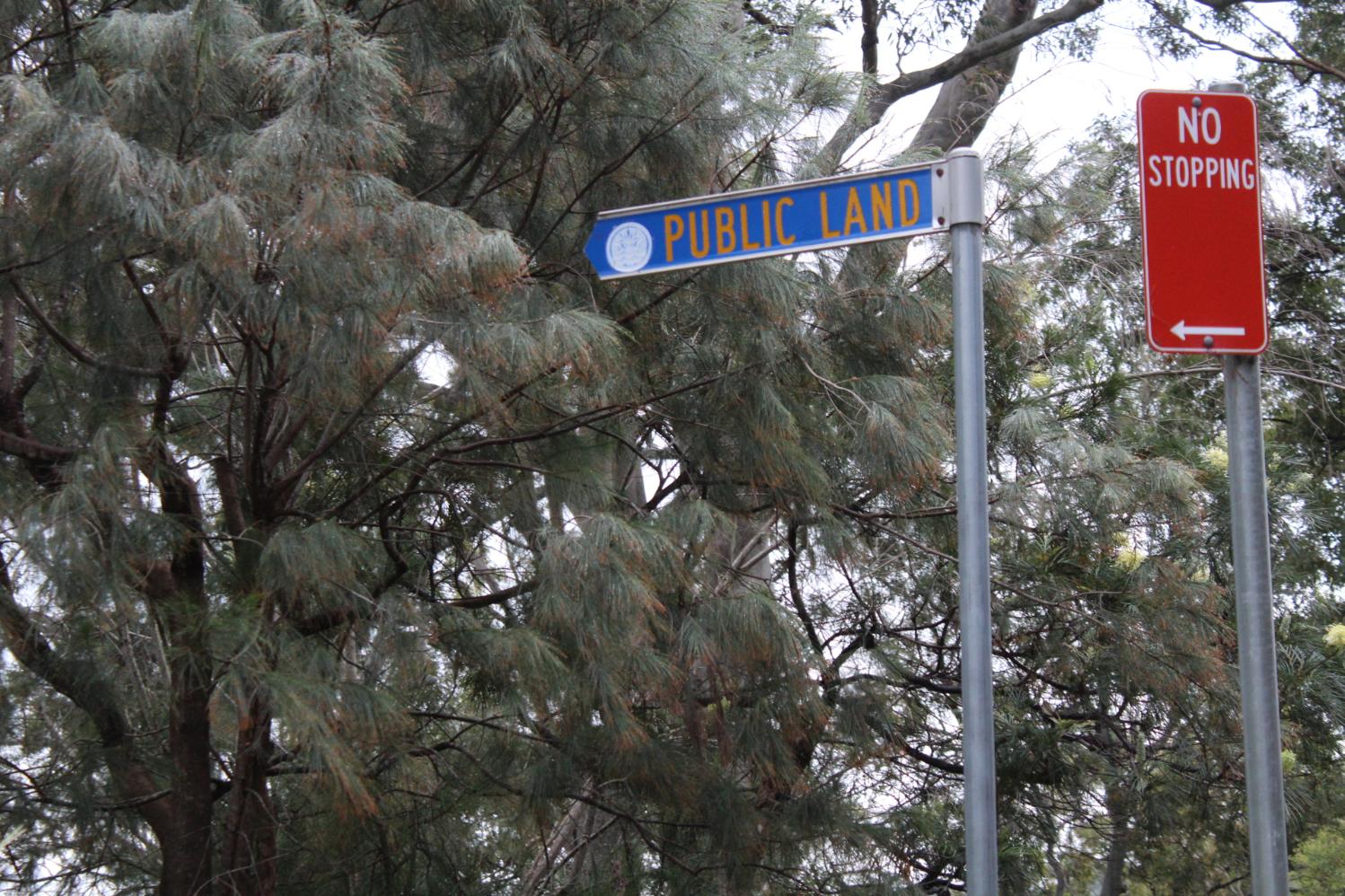 In March 2019 the Management Committee of Avalon Preservation Association stated it had, for some time been concerned about an encroachment on Shore Brace public reserve which adjoins a property on Riverview Road and should provide public access to the Pittwater Foreshore.

In effect, the historic Shore Brace public reserve, which is part of the Avalon remnant spotted gum forest, had been taken over by the owner of a property on Riverview Road.

On Shore Brace Reserve there was now a driveway, a set of steps, a large structure including a letter box and a retaining wall, blocking access to the Reserve, which has been planted to look like the garden the property.

In the original DA, the owner was given permission to use part of the reserve for driveway access, but regrettably subsequent building resulted in the effective privatisation of Shore Brace. The APA  joined with a number of the local residents to urge Council to ensure that the owner removes the unapproved encroachments, restores public access to the reserve, remediates the reserve and erects a sign indicating that Shore Brace is a public reserve.

The battle to constrain the owner goes back to at least 2014.  Alarm bells started with the initial DA. At the time residents who lived opposite raised the alarm with Pittwater Council GM Mark Ferguson.

''It was so distressing to see the developer show no concern for boundaries. He just kept going. '' the Martins, now of Clareville, told Pittwater Online News this week

''When we moved in 2019, I was so disheartened by ongoing failures by PC and then NBC to stop the developer from ongoing encroachments and privatisation. I was however so encouraged by Peter L ’Green’s leadership and commitment. He has driven the campaign. He has been magnificent and tireless, engaging and enlisting support from neighbours and the APA. He really deserve the credit for this victory. ''

The Martins' 2014 submission on this development reads:

The Pittwater foreshore is a unique area of special significance, not just for the private property owners but for the community at large and for future generations. This results in not just rights for the property owners and the community but also responsibilities. This area is part of a remnant spotted gum forest and we do have concerns about proposed removal of a significant number of mature trees.

We have objections to some aspects of the proposed development for ....Riverview Road for the following reasons.

We are opposed to the proposal to build the new house beyond the Fore Shore Building Line. The current house was built 30 years ago when an appreciation of the uniqueness of this area was not as important to the then managing authority, Warringah Shire Council. We do not consider the proposal to build only on ... Riverview Road as justification for the FSBL encroachment. With two adjoining properties, the owner has sufficient land for a new large building without encroaching on the FSBL.

We object to the proposal for a new private driveway extending onto the Shore Brace road reserve. The developer has an extensive double property street frontage and an existing shared driveway. This shared drive way has operated successfully for 30 years. The proposed driveway will be a large, bulky, elevated concrete structure which will effectively further privatise much of the entrance to the quite unique Shore Brace road reserve which has the potential to provide rare public access from Riverview Road to the waterfront. The large concrete driveway with at least one metre high safety walls above Riverview Road will certainly impact on the views and amenity of the area for local residents and walkers.

The developer has claimed that the current shared driveway entry is dangerous. There is however significantly less traffic along that section of Riverview Road leading to Stokes Point.  The proposed driveway will be opposite the far busier Shore Brace that links Riverview Road with Cabarita Road.

Although Shore Brace has a Stop sign, familiarity with the area by locals results in very rapid exit and entry to Shore Brace. Our experience directly opposite the proposed driveway is that cars can suddenly be dangerously close to our car as we exit or enter our driveway. There is also a bus stop virtually opposite Shore Brace that can also cause traffic issues.

Shore Brace is unusual in that it comprises a road reserve linking Cabarita Road to the Careel Bay waterfront. This grassy slope is maintained by Pittwater Council and provides popular pedestrian access to the waterfront. The formed part of Shore Brace links Cabarita and Riverview Roads, providing an effective short cut, thereby avoiding Stokes Point.

When the existing house was built, the previous owner put his letter box, a small hedge and access steps on the entrance to the Shore Brace road reserve, effectively privatising that section of the road reserve. Very few people now even know that it is public land leading to the water.

A similar project was undertaken by volunteer bush regenerators next to 96 Patrick Street opposite Wanawong Road, Avalon. That road reserve although similar in steepness now provides a popular winding walking track down the steep slope to George Street.

Shore Brace can now be returned from effective private to public ownership with the prospect of some form of public access to the Pittwater waterfront.

We trust that you take note of our concerns and objections to some aspects of the proposed development in its current form.

We also consider that it is difficult from the information provided to assess the height and impact of both the elevator shaft and the antenna like structure above the roof line.

At Council’s Meeting of October 22nd 2019, all councillors bar Mayor Michael Regan, voted to approve works that were the subject of the encroachment, including the retaining wall [ subject to certification by an appropriately qualified structural engineer, and the installation of safety railings], the sandstone pathways and stairs [subject to the installation of hand railings and access signage in locations determined by Council’s engineers to ensure public safety] and the entry stairs, noting that a gate on the stairs or pathways on the public road reserve shall be prohibited, as well as the ancillary structures and fittings (lighting and irrigation).

Further; a positive covenant (drafted to the satisfaction of Council) was to be registered on the relevant property title to ensure on-going maintenance and repair of approved works, with any costs associated with creation or registration of the covenant to be borne by the applicant, the removal and redesign/modification of a sandstone letter box, reduced in size (not greater than 600mm x 600mm x 1000mm high) and relocated to the north of the driveway, with details to be submitted to Council for approval, the extension of kerb and gutter to restrict the parking of vehicle on the verge, completion of the retaining wall base to the satisfaction of Council, the reinstatement of the road shoulder / verge above the retaining wall and completion of additional landscaping as part of a weed control and planting plan, to be approved by Council staff, prepared by a suitably qualified person using only endemic plant species and for the design details of the above to be submitted to Council for approval prior to undertaking further works.

Finally it was required that an appropriate street facing sign be installed outside Shore Brace Reserve detailing the boundaries of the Reserve, highlighting that it is public land, that it provides access to the water front, and including any other relevant information Council staff deem appropriate.

The matter became the subject of an appeal in the Land and Environment court which was heard on March 30th 2021 with the judgement made by Commissioner Gray published online in CaseLaw NSW on Friday April 30th, 2021.

Council has had a positive result from this appeal lodged by appellants as the case to modify the development consent for the construction to incorporate a mailbox structure on the adjacent road reserve has been refused. The appeal has been dismissed.

Further, Commissioner Gray found that the proposed mailbox wall is unacceptable in circumstances where its location and design create an appearance that the adjacent stairs, which provide access to a public reserve, are exclusively for private use.

Specifically, the presence of the letterbox aperture within the proposed mailbox wall, the number that will appear below the aperture, and the location of the driveway and its balustrading on the other side of the stairs, all give the appearance that the adjoining stairs are exclusively for private access to the corresponding dwelling.

Commissioner Gray's judgment may be read in full here.

As private usurpations of public lands or blocking access to reserves has become rampant in our area the outcome of this case bodes well for the restoration of other excised road reserves or ensuring access to those wending ways that connect bays and hills on public land tracks and paths beneath trees is maintained or returned if it has been pilfered.

This is not the first time a local council has had problems in this vicinity. In November 10th, 1924  Warringah Shire Council Records state that in regard to Swan and Crump's Real Property Application: ''The President reported on a conference in the office of the Council's Solicitors, Messrs. Maund and Co., between himself,. Mr. Maund and Mr. H. T. Howard the chief objector to the proposal. In view of the Solicitor's advice that there was little possibility of the Council winning the case, and as Mr. Howard practically agreed in this view, it was resolved, - (Crs. Hewitt, Hitchcock) That the withdrawal of the suit against the application be agreed to.''

An action in court was withdrawn:

SUIT FOR A DECLARATION.

In connection with the suit of the Council of the Shire of Warringah against H. B. Swan and A. G. Crump, In which the plaintiffs sought for a declaration that portion of certain land fronting the waters of Careel Bay, in the Shire of Warringah, had been dedicated to the public as a public road, the case, by consent, was dismissed with costs. The defendants, who had sought to bring lands belonging to them at Careel Bay under the provisions of the Real Property Act, denied the dedication alleged by the plaintiffs. 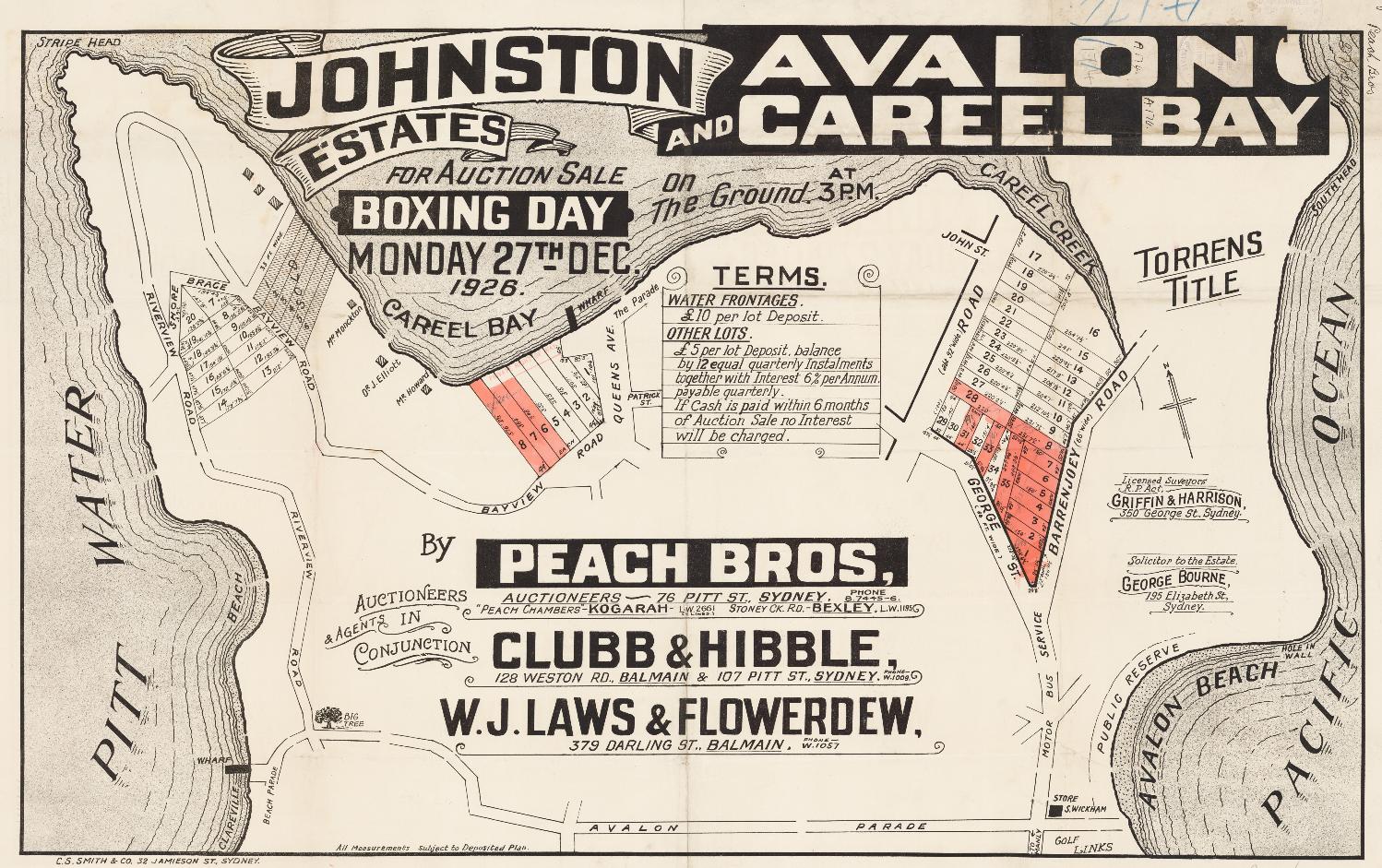 AVALON-CAREEL
THREE ESTATES AT ONCE

Three separate estates at Avalon and Careel Bay are to be sold by Messrs. Peach Bros, (in conjunction with Clubb and Hibble, and Laws and Flowerdew), next Monday.

They are linked together by the title of Johnston Estates, but are separate, and strung across the Barrenjoey Peninsula, between Avalon and Pittwater. There are 14 allotments in the section situated on the narrow strip which juts Into Pittwater and terminates at Stripe Head. They overlook the broad sheet of water, and are Within 100 feet of it. The second wayside estate has actual water frontages to Careel Bay. There are eight of these, with big depths of nearly 400 feet, which gives them other frontages to Bayview-road and Queen's-avenue as well. The Avalon offering is situated slightly north of the beach, on a rising slope which gives wonderful views across Pittwater, as well as down the southern coastline. This is the bigger section, its 34 allotments having frontages of from 40 to over 100 feet. Deposits for water frontages are £10. per lot, and for others £5 per lot. AVALON-CAREEL (1926, December 24). The Sun (Sydney, NSW : 1910 - 1954), p. 2 (FINAL EXTRA). Retrieved from http://nla.gov.au/nla.news-article224119171

Hopefully now access to this public reserve, in place for almost 100 years, will be restored. 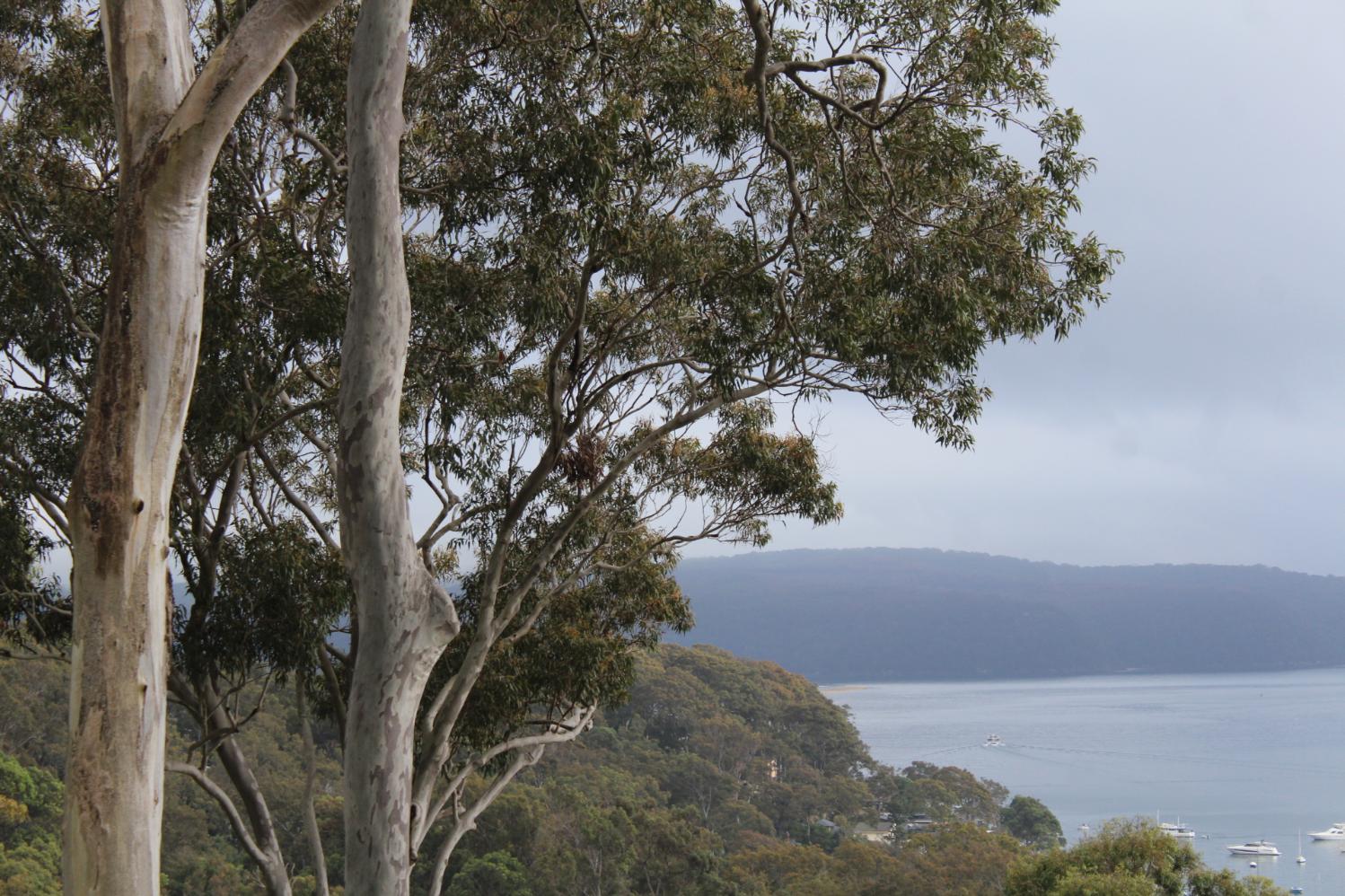