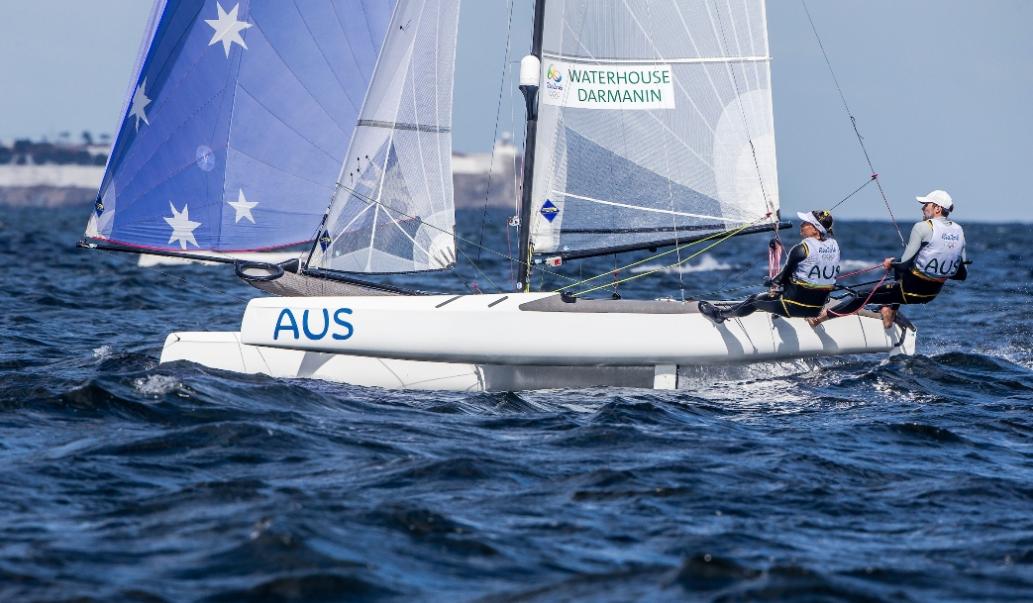 Day one racing: Photo  ©Sailing Energy / World Sailing
The 2016 Olympics Campaign of cousins Jason Waterhouse and Lisa Darmanin has brougt challenges. Day One the fleet was sent in after two races of the scheduled three heats which meant four were run on Day Two.
The Nacra 17 competitors then had a lay day and came back this morning our time for another three heats.
World Sailing's Andy Rice reports:
'The debut of the Mixed Multihull was a baptism of fire, or rather rain and incredibly fluky conditions for the 20 crews...
Some of the favourites had a torrid time on day one, including four-time World Champions Billy Besson and Marie Riou (FRA). Carrying a painful back injury, Besson is struggling to walk, let alone leap around the trampoline of a 17ft catamaran, and the French are lying in 15th overall. Even worse though for the Spanish crew of Fernando Echavarri and Tara Pacheco who are in 18th overall, not a great start for Echavarri whose last appearance at the Games was in Beijing 2008 when he won the gold medal.'
Jason and Lisa were placed 4th overall after day one, coming in 6th in Heat one and 9th in Heat two.
Day two Andy Rice states was
'After four brutal three-lap races for the Nacra 17 fleet, two teams sit tied at the top on equal points. The Australian crew's two race wins put Jason Waterhouse and Lisa Darmanin (AUS) in first place ahead of Ben Saxton and Nicola Groves (GBR), while in third place and nine points behind the leaders is the Italian crew of Vittorio Bissaro and Silvia Sicouri. '
The Australian team messaged on their Waterhouse/Darmanin Sailing  page on facebook 'Great breezes'
They placed 4th in third heat, 1st in fourth and fifth races and a 5th in the sixth race!
After this mornings races, and placing 15th in heat seven, and 11th in both the eight and nine heats, they are still holding on to first place position at 46 points – Argentina sit on 49 in second position.
French rivals Billy Besson and Marie Riou, who have been widely reported as the favourites, placed 2nd in the seventh heat and won both the eight and nine heats  – they are in 7th position after nine races on 57 points.
At 4.40 a.m. Sydney time, Sunday August 14th, they reported:
'Beautiful Sunny Day with windy  wavy conditions on the Copacabana offshore course. Despite our high scores those around us had mixed results as well. Racing tomorrow is going to be nail-biting! We will be fighting hard all the way.
Thanks everyone for your support and messages.'
There are three final heats scheduled for Monday before the Medal Race this coming  Wednesday 17th of August at 3.05 am our time.
You can follow with 2d or 3D Tracking courtesy of World Sailing at: www.sailing.org/olympics/rio2016/multimedia/live_tracking.
Standings available at: www.rio2016.com/en/sailing-standings-sa-nacra-17-mixed
__________________________________________

August 11, 2016: Sydney Time
Mixed Multihull – Nacra 17
The debut of the Mixed Multihull was a baptism of fire, or rather rain and incredibly fluky conditions for the 20 crews who must have developed a love-hate relationship with the Pão de Açucar (Sugarloaf Mountain) race course during their first two races. They should have raced three heats on day one, so now they're playing catch-up with an energy-sapping four races scheduled on the Ponte course.
Most will be hoping for a steadier and more predictable ride on the Ponte further into Guanabara Bay, although it's still likely to be pretty shifty. The Swiss and the British are tied at the top of the leaderboard with Matias Buhler/ Nathalie Brugger (SUI) and Ben Saxton/ Nicola Groves (GBR) looking to capitalise on their early lead.
The oldest competitor in the sailing competition at Rio 2016 is Santiago Lange (ARG), and the 57-year-old double Olympic medallist made the most of his experience to be sitting in third place with his co-pilot Cecilia Carranza Saroli. Some of the favourites had a torrid time on day one, including four-time World Champions Billy Besson and Marie Riou (FRA). Carrying a painful back injury, Besson is struggling to walk, let alone leap around the trampoline of a 17ft catamaran, and the French are lying in 15th overall. Even worse though for the Spanish crew of Fernando Echavarri and Tara Pacheco who are in 18th overall, not a great start for Echavarri whose last appearance at the Games was in Beijing 2008 when he won the gold medal.
By Andy Rice - World Sailing
Nacra 17 Mixed - Standings
Race 1   2     Net Points
1 SUI BUHLER Matias / BRUGGER Nathalie
1   7           8
2 GBR SAXTON Ben / GROVES Nicola
3   5          8
3 ARG LANGE Santiago / CARRANZA SAROLI Cecilia
11    2        13
4 AUS WATERHOUSE Jason / DARMANIN Lisa
6    8       14
First in second race was the Brazil  team of ALBRECHT Samuel / SWAN Isabel who placed 17th in the first heat.
17 1

'Brutal conditions' in a test of survival

Friday August 12, 2016: Sydney Time
The previous word of the day was 'tricky'. The word of the day for those that went out to sea on day four was 'survival.
The Olympic sailing competition again produced the extremes of flat water and shifty conditions on the inshore courses with the giant wind and size-of-a-house waves out on the seaward courses. This regatta is testing every extreme of a sailor's ability, which some argue is exactly what the Olympic competition should be.
Mixed Multihull – Nacra 17
After four brutal three-lap races for the Nacra 17 fleet, two teams sit tied at the top on equal points. The Australian crew's two race wins put Jason Waterhouse and Lisa Darmanin (AUS) in first place ahead of Ben Saxton and Nicola Groves (GBR), while in third place and nine points behind the leaders is the Italian crew of Vittorio Bissaro and Silvia Sicouri. "There were moments with very hard winds and others with just 10-12 knots,” said Sicouri. "So it's been very important to have the skills to perform and always keep the balance on board. I'm happy to have a rest day tomorrow, because after four races with three laps each we are tired. There's still half the championship ahead and we will fight until the end.”
Overnight leaders Matias Buhler and Nathalie Brugger (SUI) struggled to get to grips with the stronger conditions on the Ponte course and have fallen to seventh overall. The four-time World Champions Billy Besson and Marie Riou (FRA) finished the day where they started, in 15th place. Besson's back injury couldn't have flared up at a worse time, and one of the hot favourites for gold have seen their dreams shattered after two gruelling days for the injured sailor.
By Andy Rice - World Sailing
Photos courtesy Sailing Energy/World Sailing.

Sunday August 14: 8.44 a.m. Sydney Time
A host of Olympic medals have been secured on day six of the Rio 2016 Olympic Sailing Competition giving Croatia their first ever sailing medal.
Tonci Stipanovic is assured of at least a silver medal in the Men’s One Person Dinghy (Laser), with a strong chance of gold. Australia is certain of a medal too in the same class as well as the Netherlands in the Women’s One Person Dinghy (Laser Radial).
France’s Billy Besson was nursing a back injury in the lead up to Rio 2016 but the Besson everyone knows and loves was back today. After a horrible start for Besson and his crew mate Marie Riou, they have shot back up the scoreboard after an amazing day on the ocean and remain back in contention for a podium finish.
Mixed Multihull – Nacra 17
Before today’s three races on the Copacabana course, the prospect of a medal looked very distant for the pre-event favourites, Billy Besson and Marie Riou (FRA). But scores of 2,1,1 have shot the French out of the teens and into seventh overall. What is also playing into their favour is how no one else has managed to find much consistency across the series. Jason Waterhouse and Lisa Darmanin (AUS) hold on to the lead but only by three points from the next two teams tied on equal points, Santiago Lange and Cecilia Carranza Saroli (ARG) and Ben Saxton and Nicola Groves (GBR). Thomas Zajac and Tanja Frank (AUT) have made some good moves up the table to fifth overall after a solid set of scores on Copacabana.
Back ashore, Besson found it hard to walk and remain standing while talking to the media, due to his back injury. “It has been a good day, but we go step by step. Today has been a good day, but tomorrow will be another different day. Physically it’s quite tough. It feels like someone’s sticking daggers in you.”
Riou didn’t want to talk about Besson’s injury but commented about their performance on the water. “Today we found the good feelings with the boat and the speed. The first two days have been quite difficult for us, so it’s been good to find again the joy and the good feeling on board. We had 8-12 knots of wind and we were able to make the boat go fast, to do good starts, to enjoy it, and to get three good results. Sometimes you get days like this, when the sun is shining in the sky. We are trying and we are going to keep on trying. The adventure continues.”
Lange, aged 57, is the oldest athlete in the Olympic sailing competition and has won two Olympic medals in his long career. That experience is serving him well this week. “We have to be very calm, because the fleet is very competitive and the race course so difficult. There are still three races and the Medal Race ahead. We are very happy because we are in the fight, we came here to fight for a medal and we are doing it.
“The gold is always an option, we are confident on our preparation, but we are also aware that all is very open. I think that the one who is tenth in the overall results today can still win the gold. We have to be very calm and race well tomorrow.
“Billy Besson had an excellent day today, and that changes the overall results completely. We never counted him out of the fight [because of the injury]. He is the only one that can do what he is doing, he is a very good athlete and has a very good crew in Marie.”
Jason Waterhouse looked a little incredulous when he said, “We are still on top. It’s a strange day, it’s a surprise that we are still leading.” Lisa Darmanin was pleased to see the French back at full speed. “It’s really great to see Billy performing well, he’s the best out there and we want him to race the Olympics.”
By Andy Rice - World Sailing

August 15, 2016, 6 a.m.: Sydney Time
Olympics Races 10, 11, 12 Results 1, 12, 17 - 4th Overall
Snakes and Ladders - After a win in the first race we had 2 high scores and have slipped to a close 4th overall.
Tomorrow is a day off - We will regroup and sail for Gold on Tuesday. As today has shown its not over till its over!!!!
The Medal race is scheduled to be run on Wednesday 17th of August at 3.05 am our time.
www.sailing.org/olympics/rio2016/results_centre.php
The Rio 2016 Olympic Sailing Competition features 380 athletes from 66 nations, in 274 boats racing across ten Olympic disciplines. Racing runs from Monday 8 August through to Thursday 18 August 2016 with 217 male and 163 female sailors racing out of Marina da Gloria in Rio de Janeiro, Brazil. Sailing made its Olympic debut in 1900 and has been a mainstay at every Olympic Games since 1908. 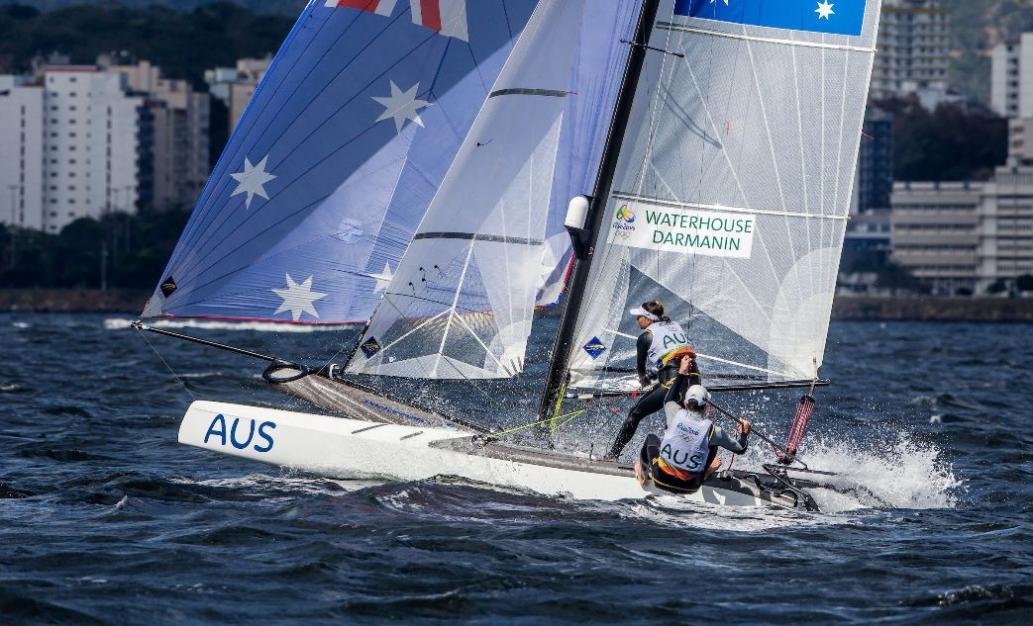 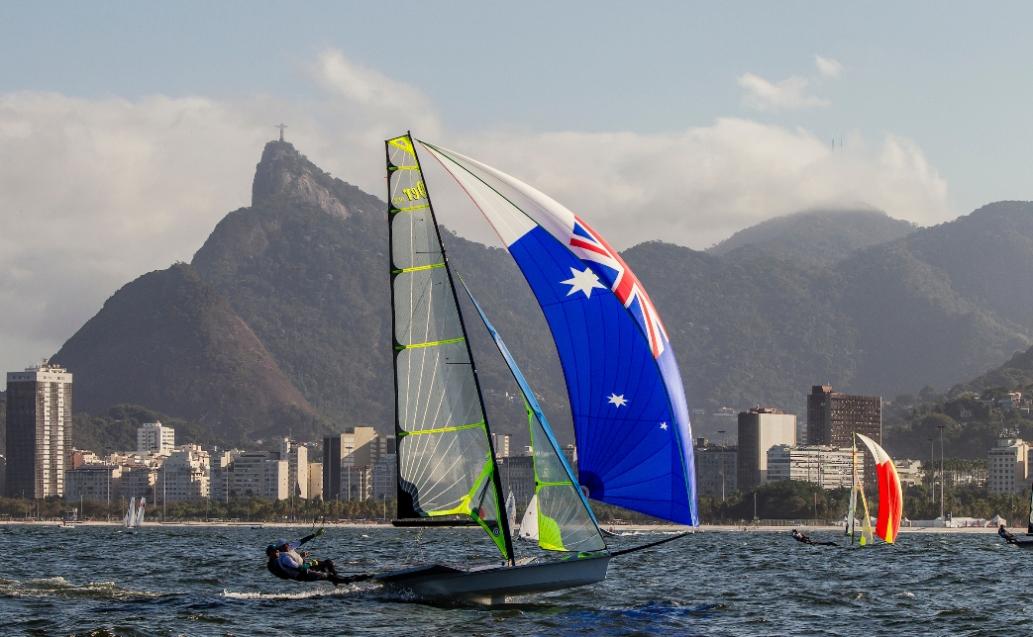