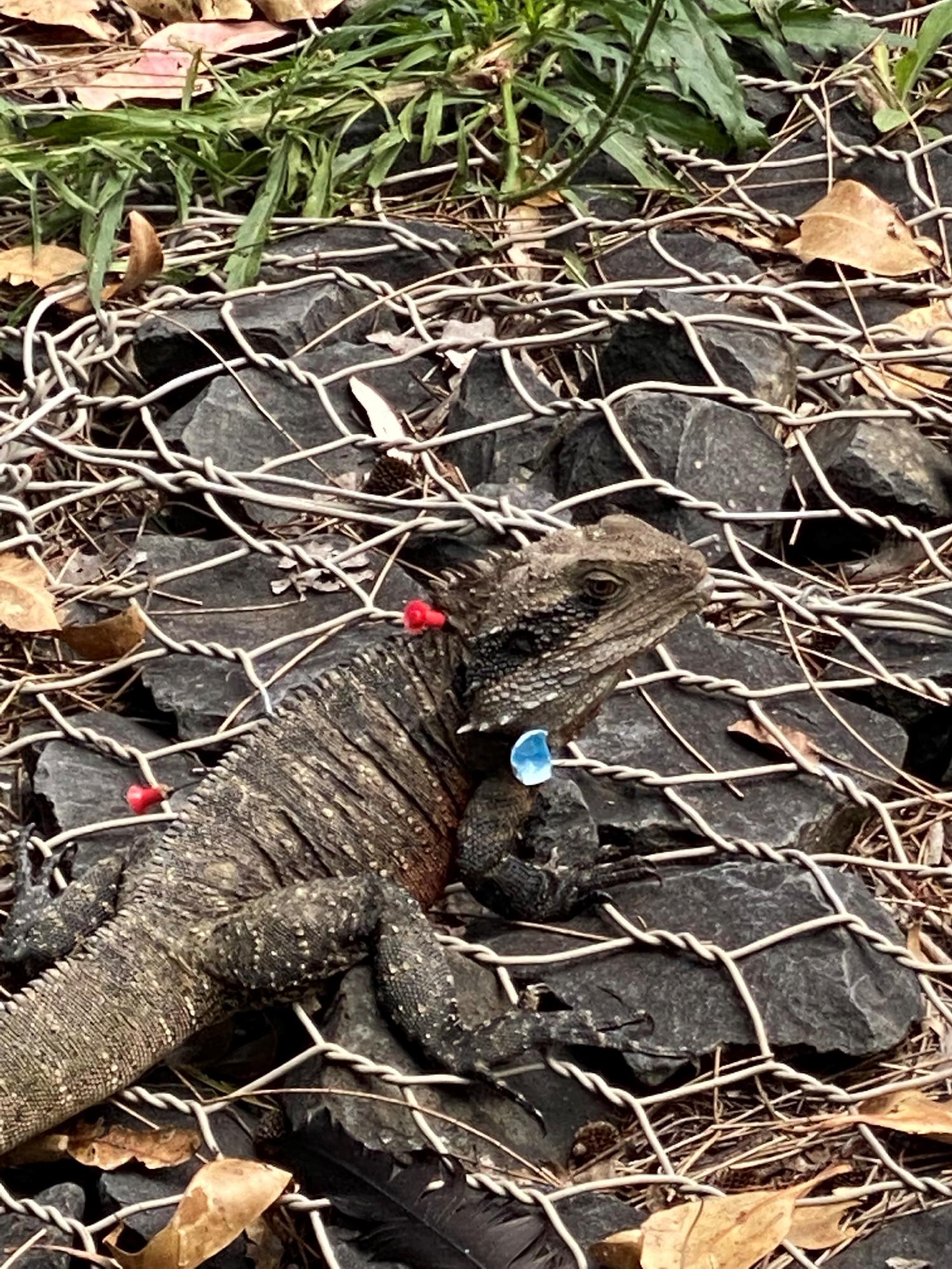 water dragon with 3 darts embedded - there is no way this dragon would have sat still while three darts were shot at it and this photo suggests there is more than one perpetrator. Photo supplied
On January 26th 2022 Sydney Wildlife and WIRES volunteers were trying to catch several native water dragons that had been shot with blow gun/blow pipe darts.

At least five dragons have been found, some with multiple injuries. Even after the darts had been removed these animals are susceptible to infections from their wounds that can cause death.

There are also fears that other wildlife have been targeted. If you see any wildlife in distress please phone Sydney Wildlife Rescue 24/7 on 9413 4300.

Officers attached to Northern Beaches Police Area Command have been told a Sydney Wildlife volunteer found the injured reptiles at midday on Wednesday 26 January 2022, at the wetlands on Shearwater Drive, Warriewood.

The officer, assisted by volunteers, captured the water dragons and removed several darts – between 2cm and 3cm long – which were embedded in their bodies.

Two required treatment and one remains in care with a Sydney Wildlife volunteer.

Four water dragons have since been returned to the wetlands.

Sam, one of the volunteers, had hands on one on Thursday but despite four people in vicinity it jumped and swam under. It has the dart embedded in back of head.

''We are trying to not cause more damage to them.'' a Sydney Wildlife volunteer explained

Sydney Wildlife Mobile Care volunteers revisited the site on Friday in an attempt to locate other lizards who had been shot with the darts, as well as any other animals that may have been hurt.

None have, so far, been found. However, a resident named Katie found the destroyed shell of a turtle in the same Warriewood wetlands location as the injured dragons.

'I found this poor turtle this morning - while trying to help another water dragon with dart in its neck,' Katie said.

Thank you to Jacqui, Ian, Bec, Sam, Margaret, Neil, Joan, Katie and also Lachlan (one of WIRES volunteers) for assisting with the rescues.

'On a public holiday that supposedly celebrates all things Australian, our volunteers have been trying to catch several native water dragons that have been shot with blow gun/blow pipe darts. A most un-Australian act!' the team said.

Police have commenced an investigation with the red plastic-tipped darts seized for further examination.

the weapons used against Warriewood's water dragons and gathered at the sites. image supplied

This dragon’s lip was split open by a blow dart.

As inquiries continue, police are appealing for anyone with information to contact Northern Beaches Police on 9971 3399 or Crime Stoppers on 1800 333 000 or https://nsw.crimestoppers.com.au.

You can report information about this incident anonymously online at: www.crimestoppersact.com.au/make-report

Councillor Vincent De Luca OAM has reported this crime to Northern Beaches Council and asked for increased Ranger Patrols, CCTV in the area be considered and liaison be undertaken with NSW Police for action.

''Residents have asked whether blow darts are illegal - they are!'' Cr. De Luca said on Friday

''Section 4 of the Weapons Prohibition Act 1998 (NSW) includes a blow-gun or blow-pipe “that is capable of projecting a dart, or any other device that consists of a pipe or tube through which missiles in the form of a dart are capable of being projected by the exhaled breath or the user or by any other means other than an explosive". A prohibited weapon also includes "any dart capable of being projected from a blow-gun or blow-pipe".

''Residents have pointed out that blow guns and darts are advertised on ebay and obviously being imported into Australia and asked what can be done to stop importation.'' Mr De Luca stated.

''Importation and advertising weapons falls under the jurisdiction of the Federal Government. If you want tougher laws on this, you can request the local Federal MP, Jason Falinski to consider the matter.''

Mr. Falinski can be emailed at jason.falinski.mp@aph.gov.au

All native birds, reptiles, amphibians and mammals are protected in New South Wales by the Biodiversity Conservation Act 2016 (BC Act). Hundreds of these species are listed as threatened. The Department of Planning, Industry and Environment (DPIE) works to protect these species and their habitats.

The Australian water dragon is the only species of the genus Physignathus in Australia.

There are two subspecies; Physignathus lesueurii lesueurii (eastern water dragon) and the Gippsland P. l. howitti (Gippsland water dragon). P. l. lesueurii tends towards white, yellow and red on the throat and possesses a dark band behind its eye; P. l. howitti lacks this and instead has dark bands on either side of its throat, which is blotched with yellow, orange, or blue. Both subspecies are light greenish grey in overall colour with black bands running across their back, tail and legs.

Australian water dragons are extremely shy in the wild, but readily adapt to continual human presence in suburban parks and gardens.