Water Access Only
More Tales And Adventures From Pittwater 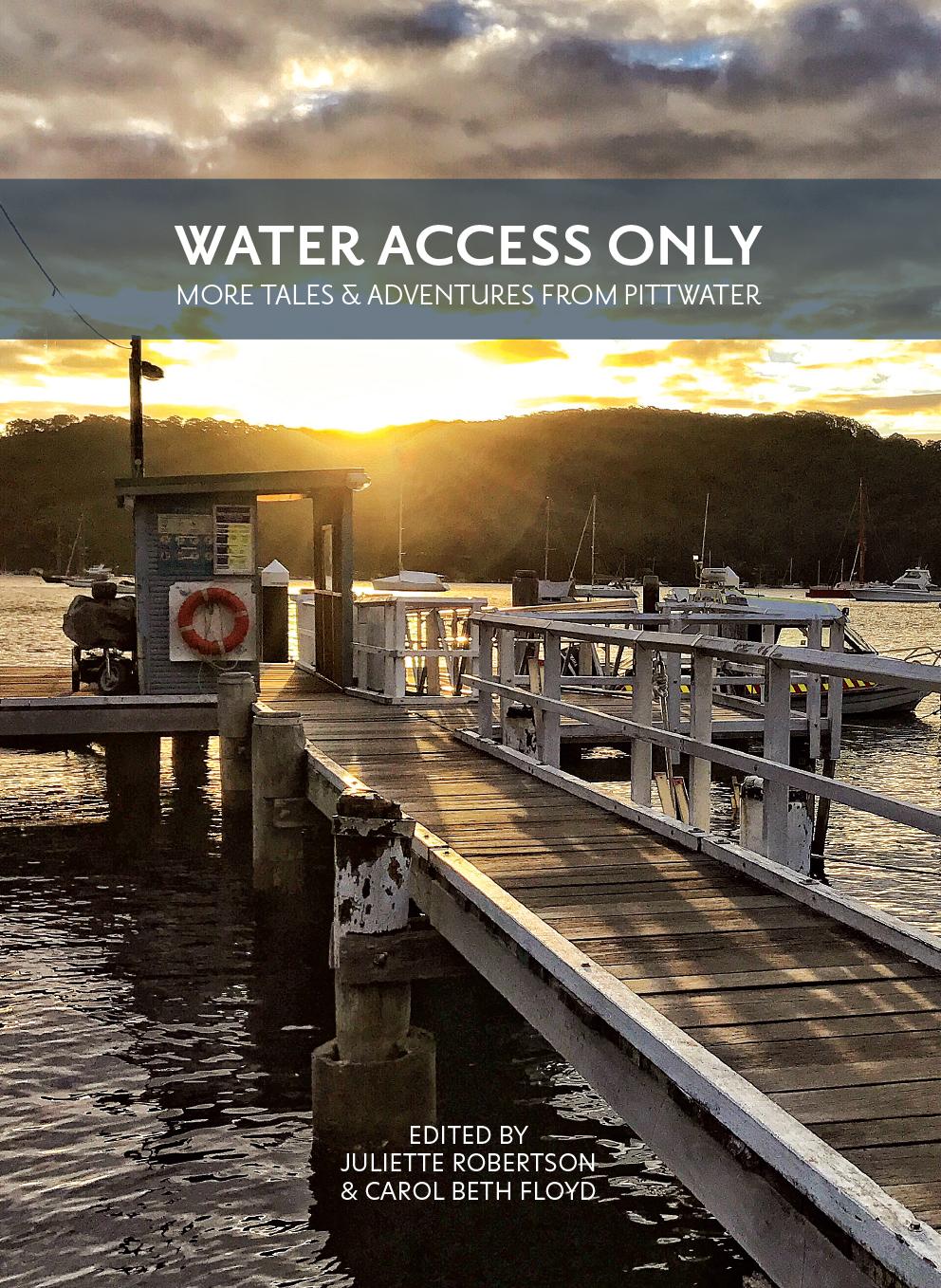 A RARE CREATIVE COMMUNITY OF STORYTELLERS, POETS, ARTISANS, PHOTOGRAPHERS AND MUSICIANS SHARE THEIR TICKET TO RIDE

… James spotted the sinking tinny through the rain and started to row out to it, realising that the rowboat itself was taking on so much water he mightn’t make it. Rowing madly, he had to gamble that his weight was not going to sink the tinny should he get into it and start bailing it out as quickly as possible. He gingerly got out of one half sunk boat into the equally compromised tinny, taking the oars with him in case the engine didn’t start. With much effort, he bailed the tinny out sufficiently to row it back to the shore with the additional weight of the half-submerged rowboat being towed behind him.

Scrambling to shore absolutely exhausted, he hurriedly secured the boats and arrived home white and shivering – a shell of the man who had left only hours before. Barely keeping it together, he headed straight for the bedroom, peeled off his drenched clothes and lay in the foetal position under a blanket till dinnertime.

From: Adventures at Mackerel
By Alex Hawthorne and James Robison

Written, collated, edited and produced by a community in COVID-19 lockdown, Water Access Only is a new community anthology by 60 residents from Scotland Island and Pittwater’s Western Foreshores living on Sydney’s Northern Beaches.

This eclectic group of ordinary people living extraordinary lives merge seamlessly with more notable award-winning writers, poets, artists, songwriters and photographers – all bound together by shared experiences, an appreciation of their natural surroundings and the challenges of living in a heavily wooded, water-access-only location.

The vagaries of living in these communities also results in quirky, odd and even hilarious situations, as shown in many of the amusing stories and poems in the book. One well known island tradition is the Scotland Island Dog Race, described by long-time resident and storyteller John Travers from just a few stanzas of his poem: The K9 Melbourne Cup.

These resilient people have learnt to juggle cars and boats and ferry timetables and rely on each other for help in emergencies and hardships – or just to borrow an egg, an umbrella, or a chainsaw. They walk to each other’s homes for dinner parties and walk home by torchlight. Fences are few and doors are usually open.

This immersion in a semi-rural lifestyle means that they live with water tanks and septic tanks, experiencing the nearness of nature each day. Exposed to the whims of the weather and to sometimes difficult terrain, their lifestyle generates both challenges, pleasures and wonderful memories that remain with them forever.

While getting a cavity filled in a dentist’s chair in Los Angeles
I close my eyes and visualise the boat trip from Little Lovett Bay to Church Point
Untying from the long timber jetty and donning a sun-faded life vest,
Lowering the two-stroke engine and turning the key,
Glancing over at gum trees along the shore, dotted with white sulphur-crested cockatoos.
The brief floating moment mid-journey when the tinnie planes atop the water.
The deceleration as the Pink Water Taxi’s floating office appears to my right.
A customary wave at a fellow pilot as our vessels pass
Slipping the boat into reverse to slow into a park at the commuter wharf
Just as the sound of drilling stops.

Co-Publisher, Juliette Robertson on the Background to what inspired the book.

During COVID-19 at the darkest times, the sun still shines on the water, the wind still whispers through the trees and neighbours still help each other. There is history here, and the air vibrates with the memory of all that has gone before and the possibility of new beginnings.  One just needs to step out on the deck, and the senses are infused with the sights, sounds and smell of an adventurous life. That is what draws so many writers, artists, crafts people and musicians to this special place.

Juliette Robertson is not a stranger to capturing stories of communities. An adventure traveller and writer, she has produced two anthologies in her spare time away from the rigours of corporate life. So, marooned on Scotland Island during Lockdown, the thought of producing a new community anthology of true stories to celebrate this lifestyle began to percolate.

“I tested the idea by asking the locals if they were interested in collaborating on a second volume as a follow up to the first which was produced in 2009. The result was unanimous and so I formed a small offshore production team and called for contributions. Written, photographic, artistic works poured in. Our production team has worked remotely throughout the year and each person has generously shared their time and expertise so that in 9 months we have created volume 2 Water Access Only, More tales and adventures from Pittwater.

“I believe it is so important for communities and families to capture their stores to inform and inspire future generations. Anyone wanting advice or mentoring to lead such a project for their own family or community should contact Juliette Robertson here:  support@Wateraccessonly.net

The team behind the book

Juliette Robertson and Carol Floyd are long term residents of Scotland Island  and love the unique environment and the community which surrounds them.​

In 2006, Juliette, together with Carol, and her husband Gordon Floyd, and journalists Edna Carew and John Hoffman, (also long term residents) , combined their professional skills and  set out to capture in print, the essence of what it's like to live an Offshore life -  where the only way to get home is by boat..

Over 50 residents of Scotland Island, and the western foreshores of Pittwater, enthusiastically submitted their true life,  funny, poignant stories, poems, photography and art and before long, Water Access Only - Volume 1 - Tales and Images from Pittwater was published. The book was a big hit, selling well over 1000 copies.​

Fifteen years later, in 2021 with many new residents drawn to live an offshore lifestyle and the COVID lockdown (in its second year), forcing many residents to stay at home, dozens of enthusiastic requests from the community began to pour in for a second volume of the Anthology.

Juliette and Carol were joined by Jane Matthews to design the book and Jane Rich and Jane Morgan as sub editors.

Over 60 residents submitted short stories, poems, artwork, photography and the project was born.

In a community brimming with artists, writers and photographers, it's no surprise that someone, sooner or later, would think of binding all that talent into a book. And so it was that in 2006 Juliette Robertson and John Hoffman put together the first anthology of works intended to reflect our Pittwater offshore world. The book was highly successful, frequently quoted at dinner parties and remains treasured by offshore and former offshore residents alike.

Now, 15 years later, we have the launch of 'Water Access Only: More Tales & Adventures from Pittwater'. Or, to put it more succinctly, WAO2. There are some changes this time. John Hoffman has been replaced in the editorial team by CB Floyd. WAO2, unlike its predecessor, is printed in colour throughout. And this time the book comes with a barcode that enables you to listen to a Spotify playlist of offshore musicians.

But the basic premise remains the same. WAO2 is a collection of stories, reminiscences, poems, drawings, cartoons, photos, paintings and other artworks, displaying the diverse talents within the offshore community. Contributors come from not only Scotland Island but from every part of the western foreshore, stretching from McCarrs Creek to Mackerel Beach. The mood of the works is equally varied, ranging from sombre through to comical, factual to fanciful. Just about every aspect of offshore life will be found somewhere: boats, buggies, sailing, septic, friendship, solitude, birth, death, bush fires and, of course, car parking.

Juliette and CB were supported by Jane Morgan and Jane Rich as assistant editors, plus Jane Matthews as designer. They deserve our praise. But thanks also go to the 70 or so contributors. All bared their creative souls to the scrutiny of their community. I know from writing the PON that that's not an easy thing to do.

The book contains hundreds of creative works, all for $35. If that's not value enough, there's a bonus. At the end of the book there's a paragraph of biography for each contributor. To a stickybeak like me the book is worth its price for that alone.

Copies can be bought online. Assuming there are copies left, they can also be bought at the 12 December Two Catherines café on Scotland Island. For people not on the island, copies will be stocked in local bookshops and at outlets at Church Point. 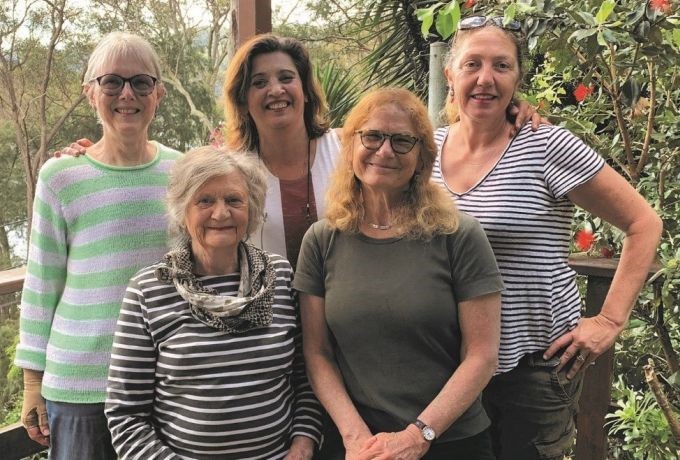 “If you want to know what it’s like to live the dream, fall into these pages and be beautifully, hilariously, gently and gloriously transported,” - Susan Duncan, best-selling author, Salvation Creek, The House, A Life on Pittwater and many other books.

“The value of listening to the stories of our Pittwater people is immeasurable. So, in this blessed new book, the stories, poems, even songs, concentrate on the present and living. And as for anxiety, you won’t find much of it here,” - Paolo Totaro AM Founding Chairman, Ethnic Affairs Commission of NSW (1977 – 1989)

About the Editors and Publishers

Juliette Robertson was born in Sri Lanka, grew up in Adelaide, and has raised her family on Scotland Island over 20 years with her husband Guy. She works as an Executive Coach, Mentor andTrainer and enjoys adventure travel and writing, In 2002 she self-published "Journeys", a Robertson/Marshall Anthology of Portraits and Memoirs of her extended family's journey fromBritain to Sri Lanka to Australia. She is the instigator of both "Water Access Only" community anthologies (2009 & 2021), which capture the essence of living an offshore lifestyle.In 2017, Juliette self-published "One Spanish Summer and other Stories from the Road" , twenty-six true adventure stories of studying and living in Spain and travelling the globe during her 20s and 30s.

Carol Beth (CB) moved to Scotland Island in 2004 with her husband Gordon and two dogs. She soon discovered the rewards of offshore living: in the rich community life in a little house perched high in the spotted gum forest, and in her early morning commute by tinnie across the sparkling waters of Pittwater. She has been an author and book packager (The Sydney Opera House, 2000), a publisher, a TESOL teacher and an academic skills adviser, and was involved in the first Water Access Only volume. Now she is enjoying life without the obligations of full-time work, and is instead involved in many community and individual pursuits. 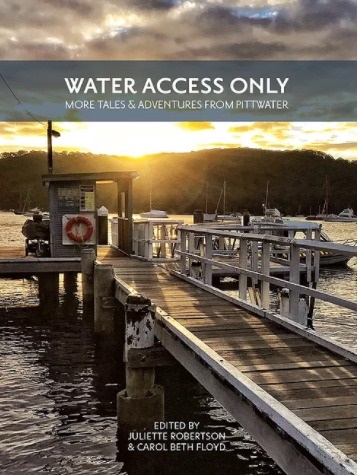 Water Access Only
More Tales And Adventures From Pittwater

This is Pure Pittwater – if you’re visiting and want to take home a slice f here with you; get this book

If you live here and want to delve deeper into some brilliant Summer reading that celebrates your home; get this book

If you have visitors you will be taking out on the water or into the bush you want to gift something unique to; get them this book

Featuring a link to an Offshore Spotify Playlist with musical tracks by talented offshore musicians to listen as you read.