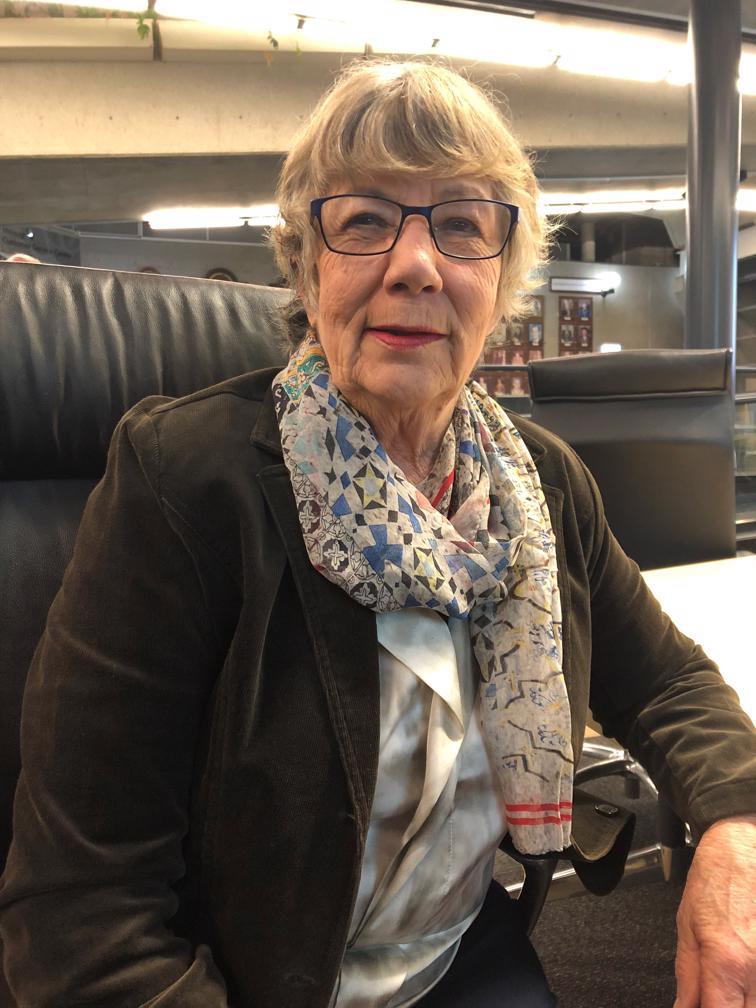 Lynne Czinner was elected on to the first Pittwater Council in 1992 representing South Ward, serving consecutive terms until 2008.

Lynne served as Deputy Mayor to former Mayor Patricia Giles for four consecutive terms, from 1998 to 2002 and was herself voted Mayor of Pittwater in April 2004.

“I am committed to protecting our natural environment and lifestyle, promoting ecologically sustainable development in Pittwater, and to providing walking and bike paths as well as recreational facilities for all ages. I believe we have a very strong environmental team who will achieve great things for Pittwater. I am available and open to listen to any ideas or issues residents may have with Council. We will get back to the “grass roots” of the people to really reflect the desires of our residents – consulting with them, talking with them and finding out what they want. All Councillors will be out and about – they are your conduit to good local decision-making.” [1.]

Lynne distinguished herself by her commitment to protecting our natural environment and lifestyle, promoting ecologically sustainable development in Pittwater, and to providing walking and bike paths as well as recreational facilities for all ages.

Lynne was also Director of North Sydney Waste Board, Secretary of Sydney Coastal Council, represented Pittwater on the Kimbriki Committee and was a strong supporter on the Peninsula Music Club.

Lynne served on the EPA's Beachwatch/Harbourwatch and Catchment Management Committee, along with a range of Council committees, including the ACCESS, Bushland and Estuary Management, Heritage and Bicycle Committees.

Why did you stand to represent residents in local council to begin with?

I ran for Council to try to get the best outcome for people of Pittwater, the South Ward and in particular planning of the new suburb of Warriewood, given the land release was announced soon after the creation of the new council. Did I succeed? The people who have moved to Warriewood seem to think so and judging from feedback the people of Pittwater want their local Council back. The Northern Beaches Council is not a local Council but rather a regional Council too far removed from locals communities.

What does local government mean to you?

Local Government is "government" for the local area by local people who have an affinity with and know what is important to their local community.

Lynne was a larger than life character. Fiercely devoted to the community and environment of Pittwater she served in many roles with Council including as Mayor, Deputy Mayor and as Chair of various committees as well as, more recently, a member of the Executive of the Warriewood Residents Association.

It was always interesting to go anywhere with Lynne as she would often stop and pull out weeds…. whether or not they were on public or private property!!

She was a consummate Councillor who spent many hours before Council meetings reading the agendas and then, to be fully prepared, asking me, as General Manager, questions about the matters to be considered. She loved to debate issues and would often require extensions of time, which her fellow councillors willingly provided, so she could finish her argument. One of the reasons the councillors would extend her time was that sometimes her arguments were so complex, and at times convoluted, that no one, sometimes Lynne herself I think, were sure which way she was going to vote. She would sometimes start with a position and then progressively argue her way around to the opposite point of view.

Always very amusing but also very much the real essence of council decisions, that is, an open debate in which all aspects are carefully explored and considered and councillors do not actually make up their mind until there is a call for a vote. I think it is a pity many other councils don’t follow this transparent form of decision making. When I first started at Pittwater as GM Lynne and I immediately had a falling out. My background is in engineering and I don’t think Lynne felt I was the right person given her dedication to environmental issues. We quickly sorted the problem out and from then on in enjoyed a very productive, trusting and respectful relationship. After we both left Council we continued to work together in the Warriewood Residents Association.

I have enjoyed knowing and working with Lynne for nearly a quarter of a century. She will definitely be missed, but not forgotten, as both a friend and as a dedicated community representative who took her job very seriously.

Lynne was a committee member of the Warriewood Residents Association from its inception in 2011.

Lynne participated in our many projects we organised so that the Warriewood Master Plan was realised to make the community what it is today.  Her knowledge of the early planning undertaken by Pittwater Council on the Master Plan along with her passion for the community was invaluable in the many submissions that the Association made over the last 9 years and a true Citizen of Pittwater.  This was demonstrated most recently when the Association reviewed the plans for the proposed Warriewood Community Centre.  She will be sadly missed by all who had the honour to know and work with her.

I always remember when we used to have site inspections on Saturday mornings at 7am (with my 2 year old in toe) on the bus. Every time we would stop Lynne was out of the bus pulling out any weed she could see and giving advise to anyone who would listen on how to do something more sustainably. Certainly a leader in this space for the common people. I loved the way her finger nails were always dirty, she was as clean as a whistle, but her nails were always dirty, sharing her true passion for the environment.

I loved the way she really truly cared for her community. She would take on any challenge if she thought it was the right thing to do. She would research it thoroughly, leaving her beautiful home stacked high with bits of paper, all dogeared and dirty, but she new exactly where everything was, and what it all meant.

I will miss Lynne very much, I will miss her passion for her community, her love of her family and her respect and care for others. I don’t remember her ever not liking someone, she may not have liked what they believed in or the words they spoke, but she was always respectful of their right to be different.

I will miss Lynnes friendship. To me, to my mother and to anyone’s life she touched. A truly kind soul, who lived and breathed her beliefs.

Lynne Czinner fought for Pittwater till the end

In May 2017, a small band of Pittwater residents, still outraged by the NSW government’s merger of Pittwater Council into the unwieldy super-authority stretching from Barrenjoey headland to Manly the previous year, met at a table outside the The Boathouse restaurant in Palm Beach. Lynne Czinner was there, ready to take on the government and prepared with an agenda and set to take minutes. We did not know then that the persistent cough she was trying to shake would have such a devastating impact.

We did know, however, that as a former Mayor and Councillor she was committed to protecting the local environment - especially Warriewood wetlands and valley - as well as caring for locals. She had a reputation for getting out and about in the community, conscientiously visiting sites slated for development or with problems reported by residents. And she responded to their queries with timely and meaningful answers.

She was also ahead of many councils in her vision, for example, for bike paths in Pittwater - that she researched extensively but which are only now being built. With other Pittwater councillors, she protected the rough edges of the area against the onslaught of concrete, championing homes with roofs that blended into the bush and the forest of Warriewood escarpment where she lived.

Her creativity - displayed as much in her stylish, artistic clothes and beautiful bohemian home, with its design based on the dimensions of a Swiss chalet - was also clear from her ability to visualise ways of doing things differently.

These attributes, combined with her deep knowledge of Pittwater, its people and environment gained during her 16 years on council (including four years as mayor), have been valuable in the campaign to recover our local council.

However, Lynne’s passion for Pittwater has also helped drive the fight. At a time when we are threatened with over-development, have lost Mona Vale Hospital as an acute facility, and bus services remain under a cloud, Lynne has been instrumental in preparing for and advising about legal action against the state government, a proposal to it under the Local Government Act for a demerger, and has helped arrange as well as attended numerous rallies and public meetings organised by the Save Our Councils Coalition and Protect Pittwater.

Despite her anger with the NSW government, Lynne always behaved with integrity and respected her opponents. She was good at compartmentalising and could move in and out of different groups with ease, providing valuable links throughout the community. Possessing great poise, she could also make a beautiful speech off the cuff - as we witnessed at a SOCC rally at NSW Parliament in October 2018.

She certainly was always keen to get on a bus and travel - whether to Randwick or Bathurst for Local Government Association conferences and to meet the current minister. There was never a major event she missed.

However, her nemesis was not far away as we were to learn only recently. She was stoic and dismissed concerns about her cough when it reappeared last year. Even though she was very ill, she continued to fight not only for her own health but for Pittwater too. Quietly and gently she continued guiding us. She never gave up - attending meetings almost to the end, never complaining.

Bob Grace, chairman of Protect Pittwater and another former Pittwater councillor sums it up for all of us when he says:

“Lynne was Pittwater. She was always there for us. She was opposed to development, she was for the natural environment.”

“But from a personal point of view, she was always there for me. She was someone who watches your back and that’s really something special.”

Lynne’s work as a mayor and councillor remain for all to see. For those in Protect Pittwater, she is an inspiration and will be dearly missed. We have not yet won our council back but when we do, Lynne will have played no small part in that victory.