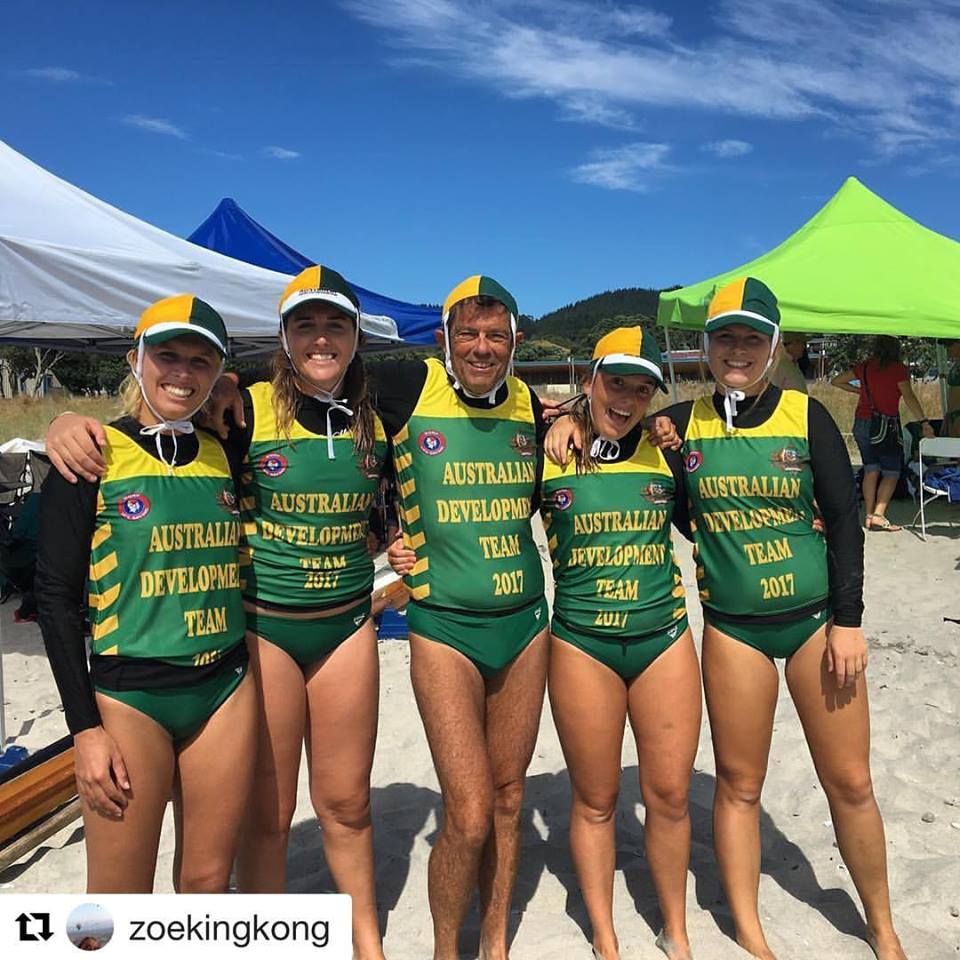 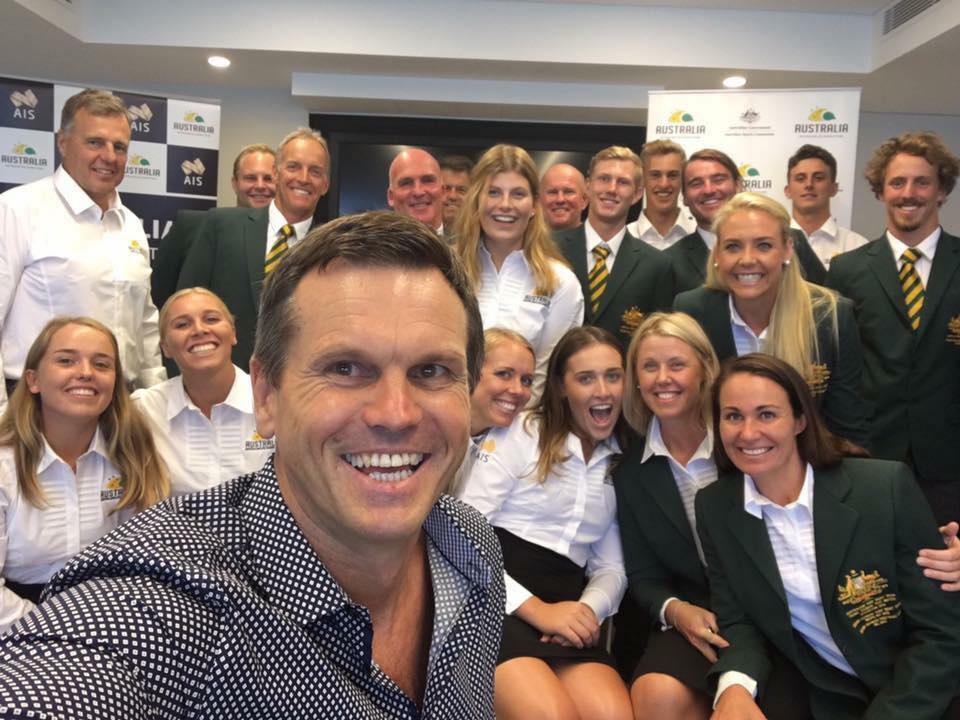 Profiles on the Australian Teams
by Team Navy ASRL

Each year Surf Life Saving Australia and Surf Life Saving New Zealand select an open men’s and open women’s surf boat crew to represent each country respectively to compete in the annual Trans-Tasman Surf Boat Test Series. In 2016 an Under 23 Male and Female Australian Development Surf Boat Team was trialed and is continued in 2017 on a trial basis. The aim is to provide a National Pathway for our members competing in Surf Boats.
This year’s event was held in New Zealand on the 4th of February.
The Australian and New Zealand Representatives for 2017 are:
Tallebudgera Open Womens crew - photo courtesy Australian Surf Life Saving Team

Avoca Beach Open Mens Crew - photo courtesy Australian Surf Life Saving Team
Sweep Richard Brierty  Age 52. Rowing in his 16th season
Surf Boat Rowing Highlights
Richard came from a highly successful ski paddling background before starting sweeping boats
His crews have gone onto remarkable success with multiple Gold in NSW State and Australian Championships in Open Male (Z crew), Open Female (Zenith crew) and Under 19's (Grease Monkeys).
Richard is recognised as one of the more successful sweeps and coaches in Australia
He has also recently won the Central Coast Coach of the year for his coaching of surf ski paddlers
What does he like about rowing?
The thing he likes most is coaching and developing young people and not only teaching rowing and conditioning, but setting them up for the future with life skills like sportsmanship, dedication, respect, punctuality, hard work ethic and looking after their mates
He loves to take his crews out in a big surf to face and overcome their fears and challenge them to greater achievements
What do you like when not rowing?
Surf board riding, Stand up paddle board, Snowboarding , Coaching ski paddlers, golf with his mates, just being on the water
Other stuff
He is proud of his family and sweeping his son Duke and also the same feeling of the family connection within his crew.

Stroke; John Paterson Age 22 . Rowing in his 6th season
Rowing Highlights
John rowed with his cousin Duke Brierty in the highly successful under 19 Avoca Beach Grease Monkeys
In 2011 they won Silver at Aussies, Gold in Aussies Surf boat relay, Gold at ASRL, Gold ASRL Novice, Gold ASRL Interstate,
In 2012 they Won their local Branch Champs in under 19 and Open men, Gold at NSW U19 State, Aussies, ASRL and NSW Lifesaver relay, and bronze Aust Life Saver relay plus many others
In 2013 the Grease Monkeys Won Branch under 19's and Open men, 2nd NSW State, 2nd Aussies, Gold ASRL,
John rowed socially for a couple of seasons and now in the reformed "Z" crew.
What does he like about rowing?
He enjoys training and pushing himself to his limits, Loves being part of a team, Knowing his mates are there for him, Cracking big waves, and of course competing
Also coaches an Avoca Beach under 23 female crew
What do you like when not rowing?
Surf board riding, Snow boarding, Played rugby for Avoca Sharks and now coaching rugby
Other stuff
Enjoys the family connection in his crew and being part of a great surf club

Bow; Duke Brierty Age 22  Rowing in his 6th season
Rowing Highlights
Duke rowed with his cousin John Paterson in the highly successful under 19 Avoca Beach Grease Monkeys
In 2011 they won Silver at Aussies, Gold in Aussies Surf boat relay, Gold at ASRL, Gold ASRL Novice, Gold ASRL Interstate,
In 2012 they Won their local Branch Champs in under 19 and Open men, Gold at NSW U19 State, Aussies, ASRL and NSW Lifesaver relay, and bronze Aust Life Saver relay plus many others
In 2013 the Grease Monkeys Won Branch under 19's and Open men, 2nd NSW State, 2nd Aussies, Gold ASRL,
Duke rowed socially for a couple of seasons and now in the reformed "Z" crew.
What does he like about rowing?
Duke loves competing and states that he hates to lose.
Enjoys nothing better that rowing in a big surf being swept by his dad, Richard.
The fitness he gets from training and striving to achieve goals are important to him
Likes just being with his best mates
What do you like when not rowing?
Surf board riding, , Played junior rugby for Avoca Sharks, and hanging with mates
Working on his development property
Other stuff
Also enjoys the family connection in his crew

Second Bow; Daniel Tamblyn  Age 22. Rowing in his 2nd season
Rowing Highlights
Daniel rowed in the Avoca Beach "Crabs" under 23 crew competing at local, NSW state and Aussies also rowing with his cousins John Paterson and Duke Brierty
The crew had moderate success but didn’t quite crack the big ones
While only 22, he is now in his first season in Open Men
What does he like about rowing?
Daniel has always kept fit and enjoys the challenge of hard training both in and out of the boat
The mateship of rowing is important to and him knowing that his mates are watching his back
He enjoys cracking big waves with Richard on the sweep and also now competing at a high level
What do you like when not rowing?
Snowboarding, fishing, trail bike riding, family
Other stuff
Also enjoys the family connection in his crew (John and Duke are his 2nd cousins)
He commented that he enjoys that he is following in the footsteps of his grandfather who also rowed for Avoca Beach.

Second Stroke; Brad "Bunce" Mitchell Age 24. Rowing in his 3rd season
Rowing Highlights
A win at Manly under 23's in 2016 set the scene for the season. His crew the" Dog Squad" went onto win their local Open Boat Branch championship and were selected to Represent Tasmania in the Interstate
An under 23 bronze medal at Aussies capped off the season
What does he like about rowing?
Bunce now knows how hard he can push himself and revels in his fitness and conditioning
His mateship with his fellow crew members is important to him
He also appreciates Sportsmanship and respect for not only his mates but competitors.
Like his mates he loves the thrill of the big surf
What do you like when not rowing?
Fishing, travelling, surfing, playing Rugby for Avoca Sharks and snow skiing
Other stuff
The only member of the crew not actually related to each other he has been made an honorary family member
Likes the fact that his father Bill, paddled skis with Richard Brierty for Avoca winning numerous titles together.
He too is proud that his extended family have all been strong Avoca Beach competitors

According to sweep Michael King, “Piret and Cele rowed 23s the last few years at Newport, Zoe started last season, rowed 19s/23s at Newport. Katy rowed 23s at Bilgola and joined the crew this season. Once they got together, they clicked and have been improving every carnival since Bilgola.”

Zoe King, age 19. Bow. 2 years rowing.
Previous highlight: winning first ever carnival I entered on home beach with dad sweeping
Favourite thing: everyone has the potential to win if the conditions are in their favour and the fact my entire family is on the beach competing and cheering each other on

Piret May, age 22. Stroke. 5 yrs rowing.
Previous achievements: moving to Newport and joining its supportive family
Favourite thing: the satisfaction and pride when you work hard and it pays off

Michael King, age 60. 45 years rowing and sweeping.
Previous highlight. Growing up in the boaties’ tent, being swept by my father, Bert. Sweeping my son, Lachy to win an Aussie medal in u19s, sweeping my wife, Liz to a World Masters Games gold and now sweeping my daughter, Zoe, representing Australia.
Favourite thing: There are a few. Being in a surfboat off Newport watching the sun come up or go down, “where else would you rather be?”, the look on the face of a new junior after his/her first wave, my heart rate rising before a race in big surf and that I have been blessed in being able to stay in this sport and share wonderful experiences with so many excellent young (and not so young) men and women.
Newport's U23 Womens Crew