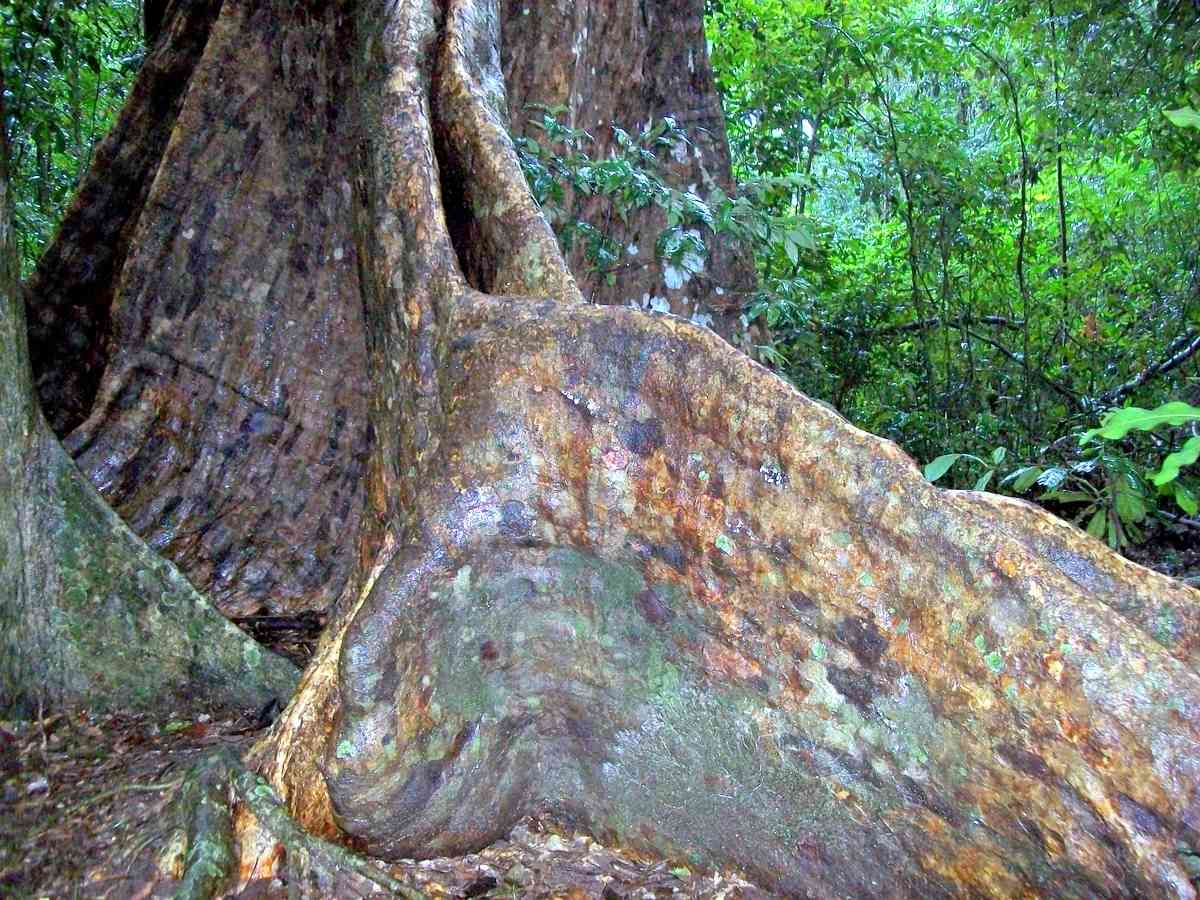 WARNING: Aboriginal and Torres Strait Islander readers are warned that the following article contains an image of deceased persons. 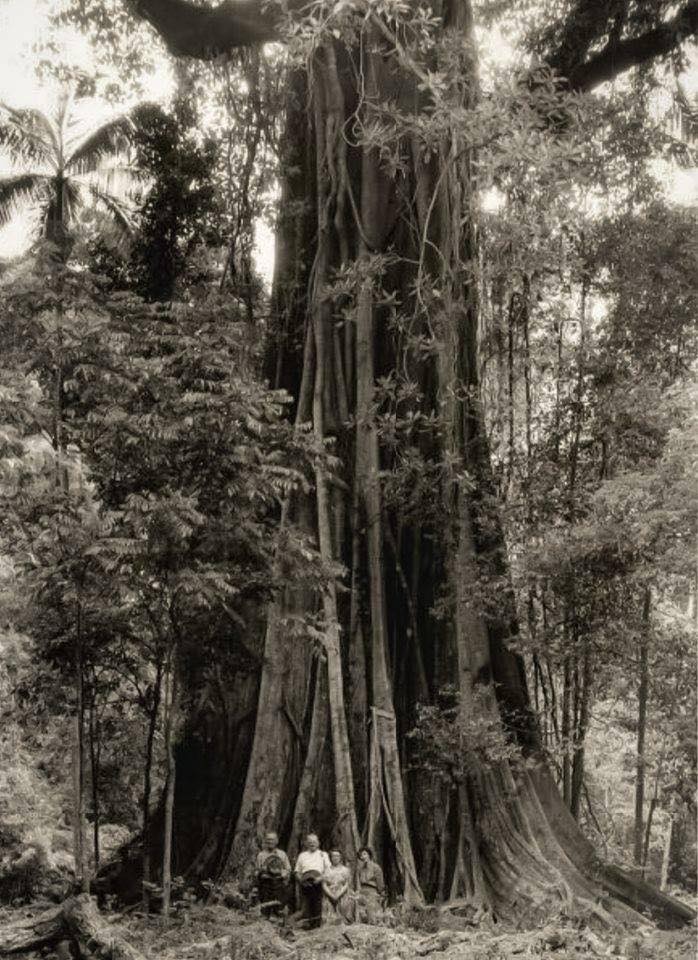 Giant fig tree from The Big Scrub Northern New South Wales, 1953
Later, the Government of New South Wales gave allotments to potential farmers that required them to clear those lands of the rainforest. Hence, most of the Big Scrub was cleared, and the surviving Bundjalung peoples were placed into reservations. 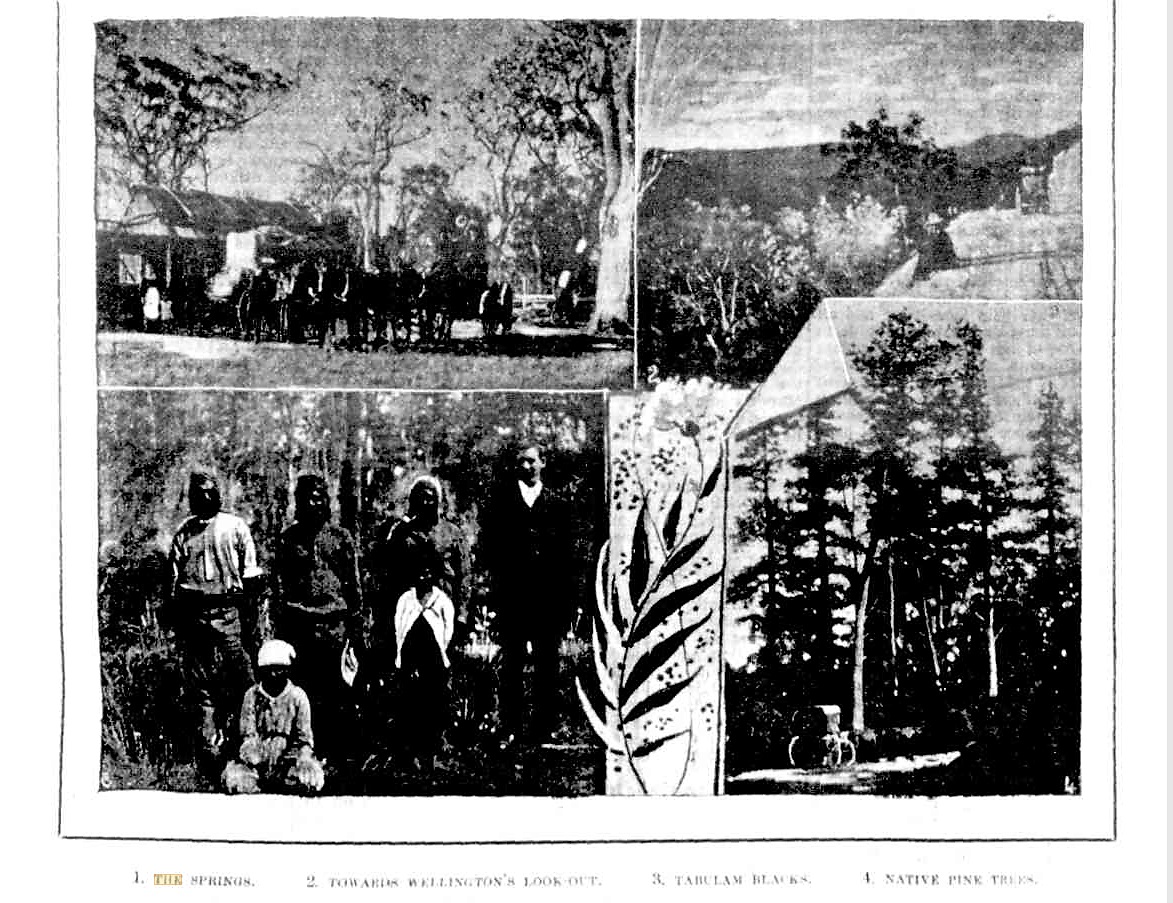 IN THE BIG SCRUB. (1892, January 23). The Australasian (Melbourne, Vic. : 1864 - 1946), p. 41. Retrieved from http://nla.gov.au/nla.news-article138622637
In the 20th century, interest in rainforest and conservation resulted in a greater effort to conserve the few remaining remnants of the Big Scrub. The major remnants are: the Booyong Flora Reserve, Victoria Park Nature Reserve, Davis Scrub Nature Reserve, Boatharbour, and Hayters Hill Nature Reserve. These remnants have been subject to ecological restoration projects which involves the removal of invasive non-native weeds.
Big Scrub remnants have become a source of native foods for cropping, especially in recent years. These include the macadamia nut, riberry and Finger Lime. Macadamia nut is now grown commercially over much of the former Big Scrub area, but the main species used in cropping, Macadamia integrifolia, did not naturally occur in the Big Scrub.
Founded in 1992, The Big Scrub volunteers are one of the largest Landcare groups in the country with more than 400 members and many supporters.
Their stated mission is to to restore and care for this critically endangered rainforest. The major focus is promoting, facilitating and undertaking long-term on-ground restoration and ongoing care of critically endangered lowland subtropical rainforest.
The group works within four key program areas: a Remnant Care Program, Rainforest Re-establishment program, Genetically Diverse Seed Program and a Community Engagement Program.
In broad figures: 25 Years - 55 Projects - $6M Value - 600+ ha Restored - 2,000,000 Trees Planted
In September 2018 Big Scrub Landcare were awarded an Environmental Trust (ET) grant for $100,000 over two years to restore critically endangered lowland subtropical rainforest. This latest grant enabled BSL to continue it’s long-term multi-partnered Rainforest Restoration Programs.
Dr Tony Parkes (President, Big Scrub Landcare) said:
“This latest ET grant marks twenty years of continuous ET funding totalling more than a million dollars. Restoration work in this project will be undertaken at 58 remnant and re-establishment sites in the Big Scrub.“
This project continues the long-term multi-partner program led by BSL to:
The major outcomes of this project will see weed infestations reduced and the condition of native rainforest vegetation improved in 46 remnants of Critically Endangered Lowland Subtropical Rainforest and at 8 Lowland Subtropical Rainforest re-establishment sites. The project allows for more than 1000 days of work by bush regenerators.
In November 2018 the group received funding from the NSW Government's Saving Our Species program, which readers will have heard of as being a major factor on the Saving of Grevillea Caleyi at Ingleside.
The group were awarded $290,400 under the NSW Government’s Saving our Species Conservation Co-Funding Scheme for 'a project to conserve and facilitate the recovery of critically endangered lowland subtropical rainforest and its many landscape-managed threatened species'. The Big Scrub Foundation and Big Scrub Landcare are providing another $264,000 in cash co-funding, resulting in $554,400 being available for this vital conservation work over the next 4 years.
In December 2018 Big Scrub Landcare was granted $50,000 from the Australian Government National Landcare Program – Environment Small Grants for rainforest restoration at the Rainforest and Water Reserve at Rocky Creek Dam.
This reserve is habitat for 25 threatened animal species and 9 threatened plant species including the pouched frog, rose crowned fruit dove, Albert’s lyrebird and many species of bat. 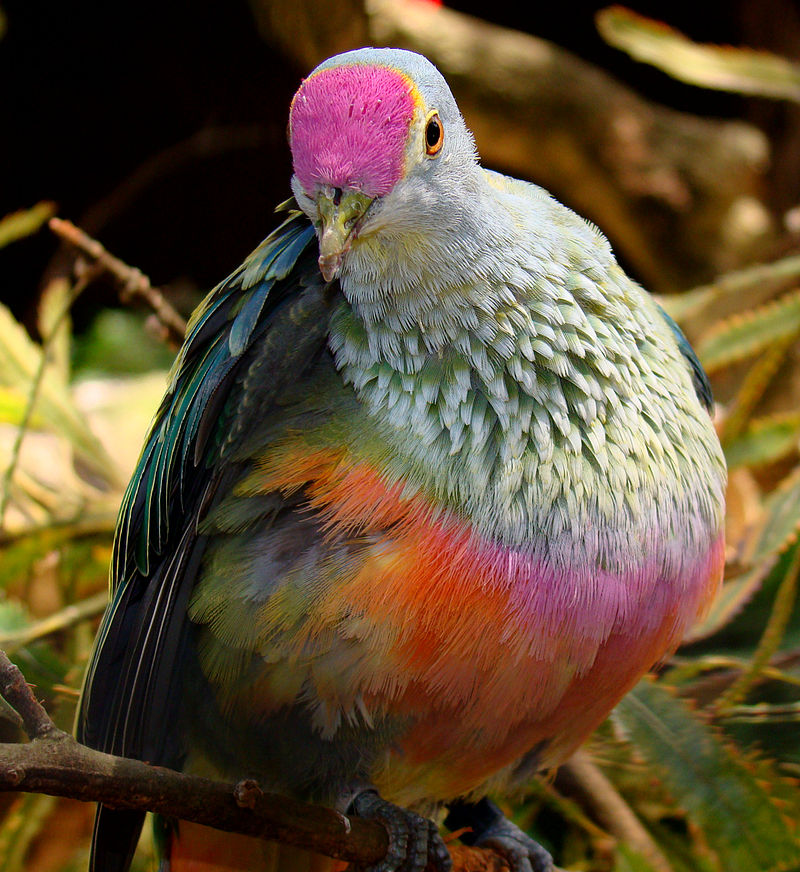 A Rose-crowned Fruit Dove Ptilinopus regina, photographed in captivity in Taronga Zoo in Sydney, Australia. Photo by Bjørn Christian Tørrissen - Own work by uploader, http://bjornfree.com/galleries.html - CC BY-SA 3.0
This project will see critically endangered lowland subtropical rainforest around the dam, the source of our region’s drinking water and adjacent to World Heritage listed Nightcap National Park, restored through systematic weed control over 15 hectares. Weeds including lantana, giant devil’s fig, camphor laurel and privet degrade rainforest and habitat for threatened species. Natural regeneration of rainforest will rapidly replace weeds following control by bush regenerators.
The project is improving the condition of rainforest and habitat for the plants and animals that depend on these areas for survival. That project is being implemented by Big Scrub Landcare with support from Rous County Council and Envite Environment.
In March 2019 BSL hosted 180 students from grades 3 and 4 from 14 schools across the Big Scrub region who came to Rocky Creek Dam to participate in environmental education activities including tree planting, bush walking and learning about drinking water catchments.
The students took part in planting 850 rainforest seedlings to learn about being aware of and taking care for their local ecosystem and catchments. The students learned about the Big Scrub, geology, flora and fauna, history and the community responses and actions for the Big Scrub.
At the end of the session some of the students were asked what they had learnt about the Big Scrub. Some of their responses were:

That event was presented by Big Scrub Landcare, Rous County Council, Dorroughby Environmental Education Centre and Lismore City Council with support from Geolink.
The project isn't just about eradicating invasive weeds or restoring the rainforest though. The BSL Program is also developing a living seed bank in the form of plantations that will produce seed from the key species of the ‘original’ forest with optimal genetic diversity for use in restoration plantings.
The total budgeted cash cost of the first plantation, comprising 23 species, is $0.5m, which is supplemented by in-kind contributions of the same amount from the Royal Botanic Gardens Sydney and other partners. DNA sequencing and genome analysis account for two thirds of the costs. Donors to the Big Scrub Foundation, the sister organisation of Big Scrub Landcare, are funding the initial work, which is the collection of leaf samples for DNA sequencing from 3400 trees of 19 species, at a budgeted cost of $70,000. Funding for the balance of $400,000 is being sought from private donors, philanthropic organisations and the Government.
The program is led by Dr Maurizio Rossetto and Dr Robert Kooyman, respectively Australia’s leading rainforest geneticist and research ecologist.
You can read all about that in this July 2019 update.
Each year BSL hosts a 'Big Scrub Rainforest Day'. Held annually in October each year, The Big Scrub Rainforest Day (BSRD) is recognised both regionally and nationally as one of Australia’s premier annual Landcare community engagement events and has attracted over 26,000 attendees since 1999.
The event provides community members with a unique opportunity to learn more about this wonderful, internationally significant local rainforest and its restoration. BSL celebrates community involvement in the ecological restoration of the rainforest through a festival program focusing on ecology, science and the environment.
What a great way to bring focus onto where you're living and celebrate while informing a community on how they can help too. 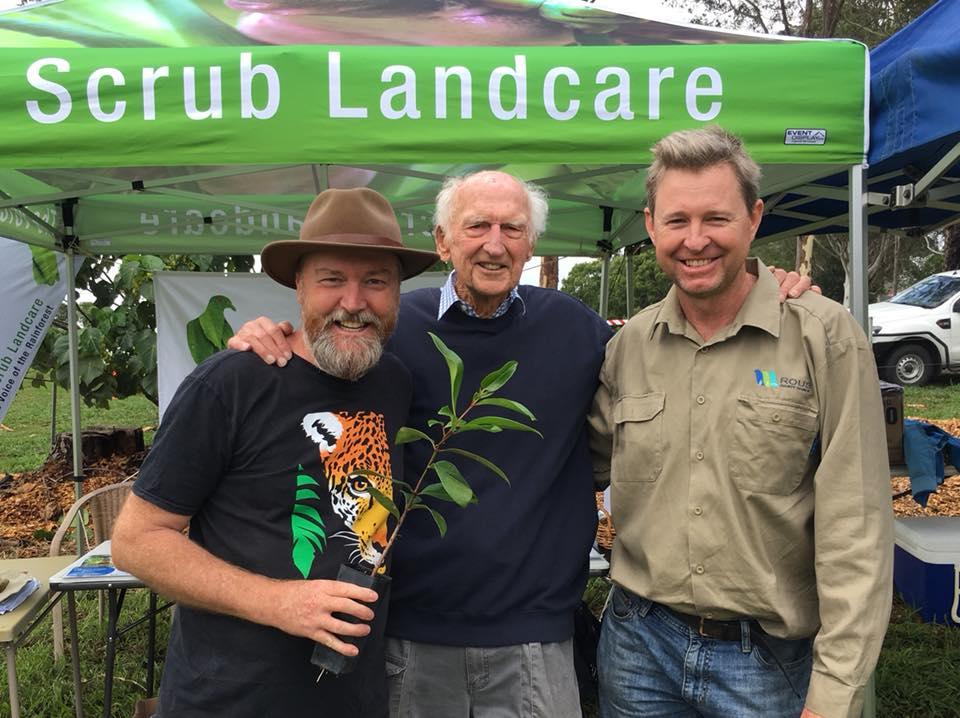 The Big Scrub Rainforest Day community event this morning saw another 1,000 trees planted in partnership with Rous County Council and help from dozens of volunteers. Pictured celebrating another successful event are Kelvin Davies, Tony Parkes and Anthony Acret. - BSL photo, October 15, 2017, by BSL Facebook page
In a week where scientists are renewing calls to protect existing forests (rather than open them up to meet shortfalls in the Forestry Corporation NSW's contracts) and the Intergovernmental Panel on Climate Change has released its long awaited special report on how land use affects climate change, Big Scrub Landcare and a whole community rallying to 'put it back', is a good news story.
BSL brings us a great reminder of how the volunteer community, working in concert with all levels of government, is turning a small tide on what needed to be done decades ago and thankfully is being pursued by many hands today.
As we head towards Spring 2019, and our own local Bushcare Groups head out into the fields to do their utmost to eradicate weeds and plant out species specific to our area, they provide a rallying cry for us all to think about doing what we can everyday to turn 1% back into 100% by 'putting it all back'. In joining a local bushcare group we all contribute to those here right now and future generations being able to access to that long sweet green sigh of relief every natural area provides.
And with Bushcare Groups, here, like there, All Are Welcome - All Belong!
Jim would be pleased! 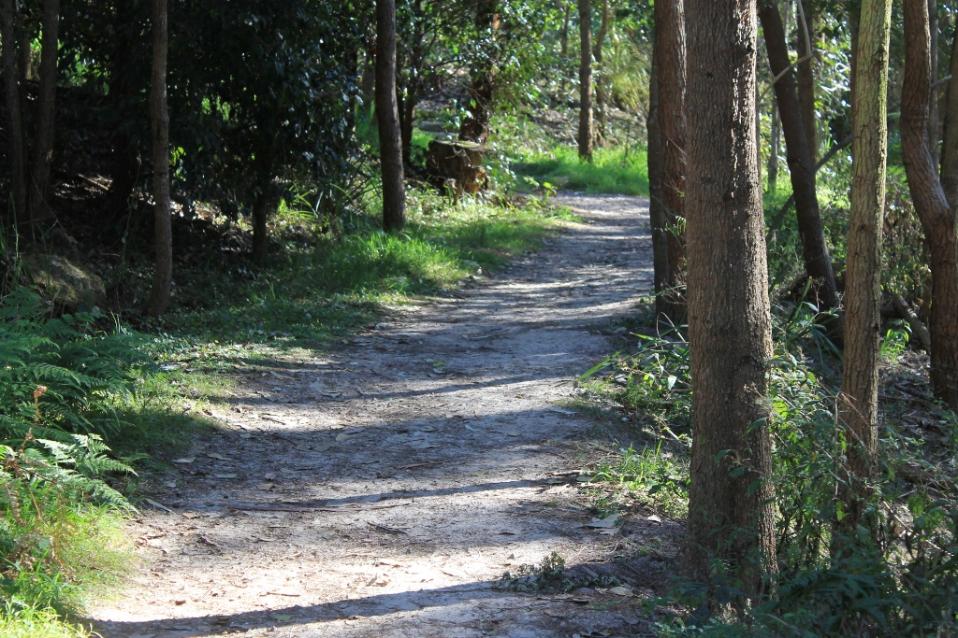 The path to Irrawong, Warriewood- A J Guesdon photo.