Did Teddy Evans Fatally Undermine Scott Of The Antarctic? 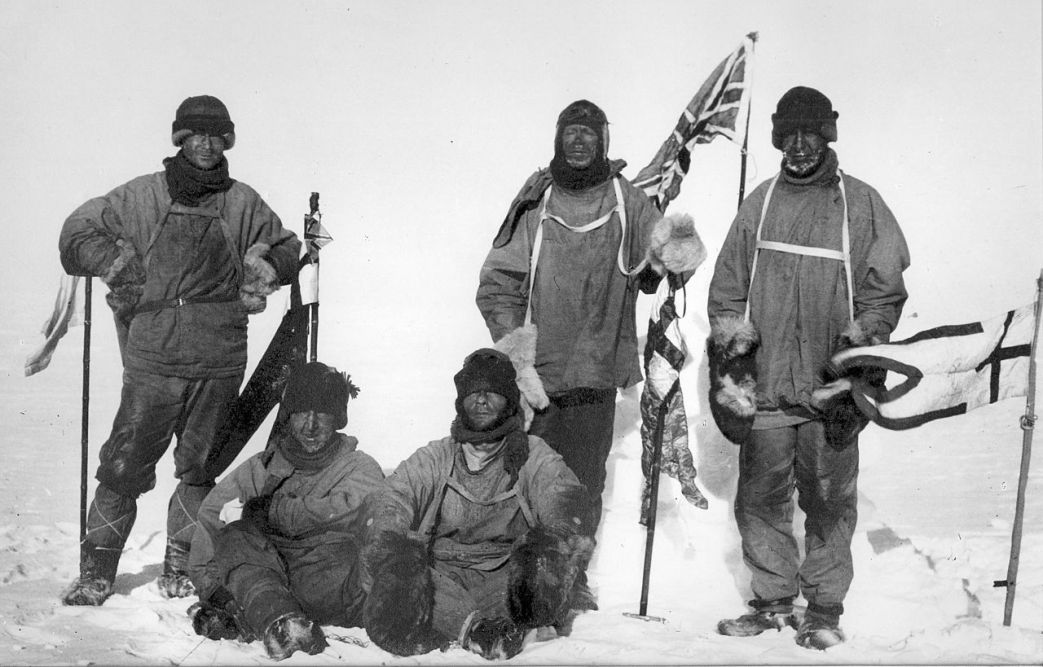 Scott's party at the South Pole, January 1912. L to R: (standing) Wilson, Scott, Oates; (seated) Bowers, Edgar Evans. Scott's group took this photograph of themselves using a string to operate the shutter on 17 January 1912, the day after they discovered Amundsen had reached the pole first. Photo courtesy  National Library of Australia

Did Teddy Evans Fatally Undermine Scott Of The Antarctic?

October 5th 2017
The tragic death of Scott of the Antarctic and four companions on the return of his scientific expedition to the South Pole in 1912 has long been blamed on poor planning by Scott.
But the discovery of new documents by UNSW Sydney researcher Professor Chris Turney, revealed today in the journal Polar Record, show how the actions of another expedition member brought about their deaths and why it has been covered up for over a century.
Through patient detective work, Turney found documents that reveal how the second in command, Lieutenant Edward (Teddy) Evans, later the 1st Baron Mountevans, crucially undermined Scott – stealing rations from food depots and failing to pass on orders to a dog sled team that would have brought Scott home safely.
“The new documents suggest at the very least appalling leadership on the part of Evans or, at worst, deliberate sabotage, resulting in the death of Scott and his four companions,” Turney said.
“The documents also show how public records were altered in later recounts of the expedition and why a Committee of Inquiry into the expedition was rapidly shut down almost before it began.”
Early on, multiple members of Scott’s expedition developed doubts about Lieutenant Teddy Evans’ role as second in command. Scott himself described Evans in letters as “not at all fitted to be second-in-command”, and promised to “take some steps concerning this”.
It is likely one of the reasons that Scott sent Evans back to base before he pushed on to the South Pole with four companions. But on the return journey from the Pole, Scott’s expedition found rations carefully planted on the journey out had disappeared.
For too long Scott has been held responsible for the death of himself and the men of his party who made the fateful expedition to the South Pole.
In addition, the updated orders Scott gave to Evans to send a dog team out to meet the returning expedition were seemingly never delivered. Instead, Scott and his team were left to die alone and starving in a blizzard.
The documents uncovered by Turney reveal how Evans had a history of taking more than his share of supplies and how public statements were changed to deflect blame from Evans’ role in the missing rations after Scott’s death.
It even uncovers why the President of the Royal Geographical Society, Lord Curzon, decided not to hold a public committee of inquiry.
“For too long Scott has been held responsible for the death of himself and the men of his party who made the fateful expedition to the South Pole,” said Turney.
“These new documents tell a very different story about how Scott’s planning for the expedition was undermined, reveal that his orders were fatally ignored and why the man who arguably contributed the most to his death was never held accountable for his actions.”
Chris Turney is a Professor of Earth Science and Climate Change at the University of New South Wales. Chris is the author of ‘Iced In: Ten Days Trapped on the Edge of Antarctica” published by Citadel in North America and ‘Shackled’ by Penguin Australia.
by Alvin Stone
Media & Communications Manager: Centre of Excellence for Climate System Science
Turney, C. (2017). Why didn't they ask Evans? Polar Record, 1-14. doi:10.1017/S0032247417000468
Abstract
Arguably the best known scientific Antarctic venture was the British Antarctic Expedition of 1911–1913 led by Captain Robert Falcon Scott. Whilst the so-called race to the geographic South Pole with Roald Amundsen's Norwegian Antarctic expedition excited international interest, the tragic death of Scott and his returning Polar Party was a striking reminder of the hazards of operating in the south. Recent work has highlighted the possible role expedition second-in-command Lieutenant Edward ‘Teddy’ Evans played in the deaths of Scott and his men. Here I report newly discovered documents which, when placed in a wider context, raise significant questions over Evans’ behaviour during the expedition. The evidence focuses on the shortage of food at key depots, the apparently deliberate obfuscation of when Evans fell down with scurvy and the failure to pass on orders given by Scott. It is concluded that Evans actions on and off the ice can at best be described as ineffectual, at worst deliberate sabotage. Why Evans was not questioned more about these events on his return to England remains unknown.
Paper from Polar Record: Why didn't they ask Evans?
Original letter from Evans complaining about the treatment he received from Scott.
The Worst Journey in the World by Apsley Cherry-Garrard (1922) read online at Project Gutenberg
State Library of NSW: Autograph letter signed from Edward Ratcliffe Garth Russell Evans, 1st Baron Mountevans, from Chard, England, to Captain J. P. Irven, 5 July 1912, complaining about the treatment he received from Robert Scott during the Antarctic Expedition-Item No.: IE4441059
State Library of NSW: Photograph album of the Scott expedition to Antarctica, 1910-1913 / annotated by T. Griffith Taylor 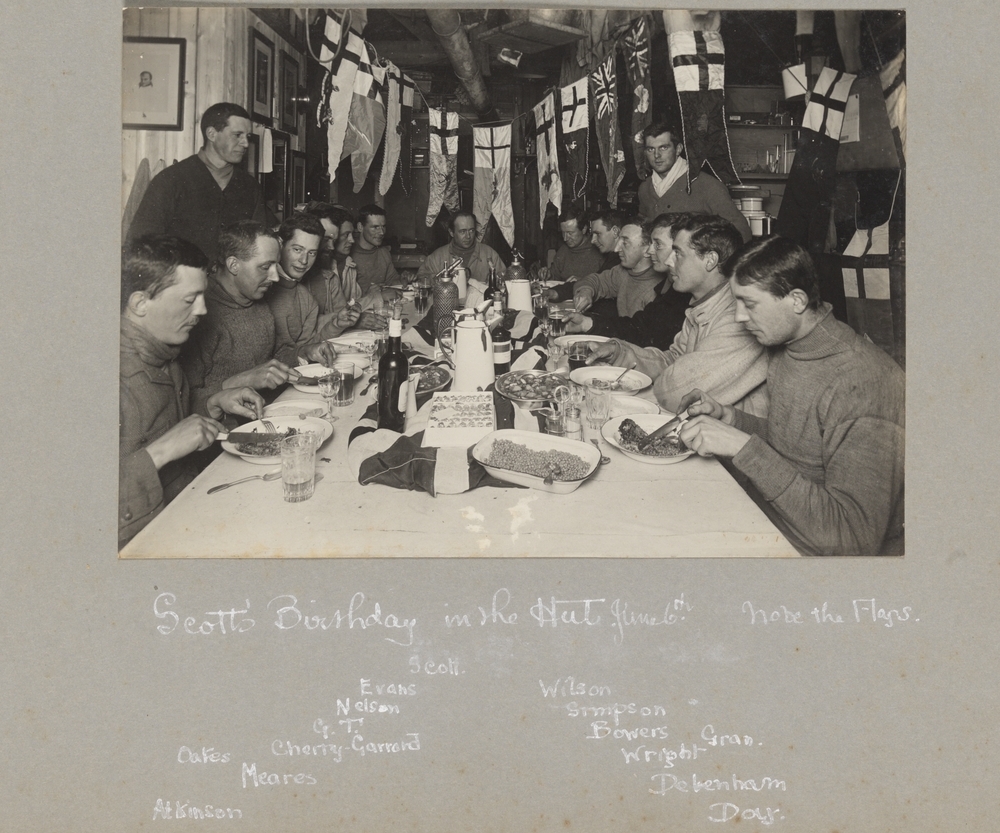 Scott's Birthday in the Hut. June 6th. Note the flags, from Photograph album of the Scott expedition to Antarctica, 1910-1913 / annotated by T. Griffith Taylor, State Library of NSW, Image No.:

The Terra Nova Expedition, officially the British Antarctic Expedition, was an expedition to Antarctica which took place between 1910 and 1913. It was led by Robert Falcon Scott and had various scientific and geographical objectives. Scott wished to continue the scientific work that he had begun when leading the Discovery Expedition to the Antarctic in 1901–04. He also wanted to be the first to reach the geographic South Pole. He and four companions attained the pole on 17 January 1912, where they found that the Norwegian team led by Roald Amundsen had preceded them by 34 days. Scott's entire party died on the return journey from the pole; some of their bodies, journals, and photographs were found by a search party eight months later.
The expedition, named after its supply ship, was a private venture, financed by public contributions augmented by a government grant. It had further backing from the Admiralty, which released experienced seamen to the expedition, and from the Royal Geographical Society. The expedition's team of scientists carried out a comprehensive scientific programme, while other parties explored Victoria Land and the Western Mountains. An attempted landing and exploration of King Edward VII Land was unsuccessful. A journey to Cape Crozier in June and July 1911 was the first extended sledging journey in the depths of the Antarctic winter. 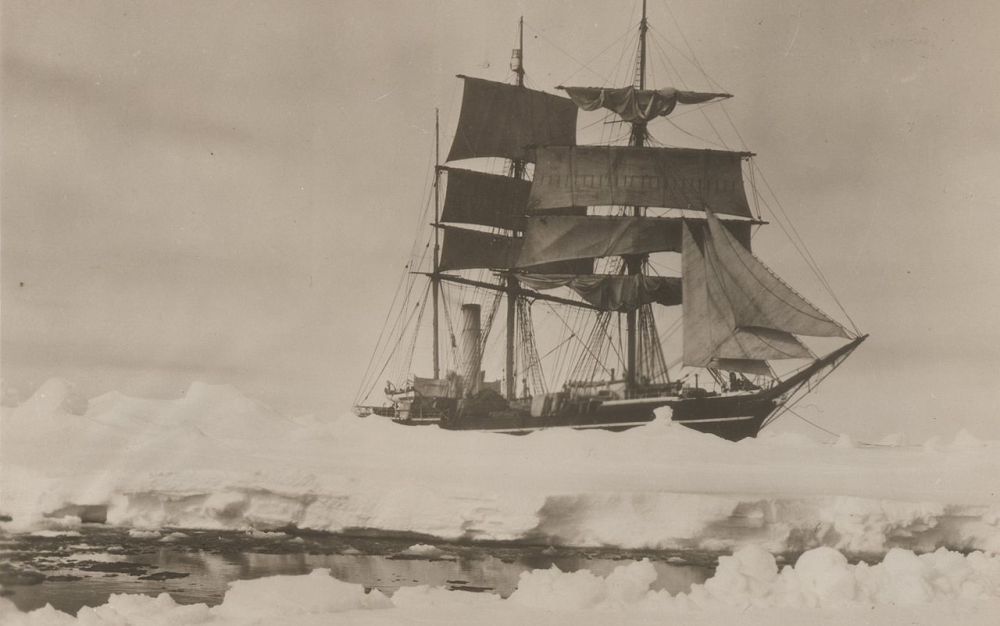 Terra Nova, photographed in December 1910 by Herbert Ponting
Captain Robert Falcon Scott, CVO, RN (6 June 1868 – 29 March 1912) was a British Royal Navy officer and explorer who led two expeditions to the Antarctic regions: the Discovery Expedition (1901–1904) and the ill-fated Terra Nova Expedition (1910–1913). On the first expedition, he set a new southern record by marching to latitude 82°S and discovered the Polar (Antarctic) Plateau, on which the South Pole is located. On the second venture, Scott led a party of five which reached the South Pole on 17 January 1912, four weeks after Roald Amundsen's Norwegian expedition.
On their return journey, Scott's party discovered plant fossils, proving Antarctica was once forested and joined to other continents. A planned meeting with supporting dog teams from the base camp failed, despite Scott's written instructions, and at a distance of 150 miles from their base camp and 11 miles from the next depot, Scott and his companions perished.
Before his appointment to lead the Discovery Expedition, Scott had followed the career of a naval officer in the Royal Navy. In 1899, he had a chance encounter with Sir Clements Markham, the president of the Royal Geographical Society, and thus learned of a planned Antarctic expedition, which he soon volunteered to lead. Having taken this step, his name became inseparably associated with the Antarctic, the field of work to which he remained committed during the final 12 years of his life. 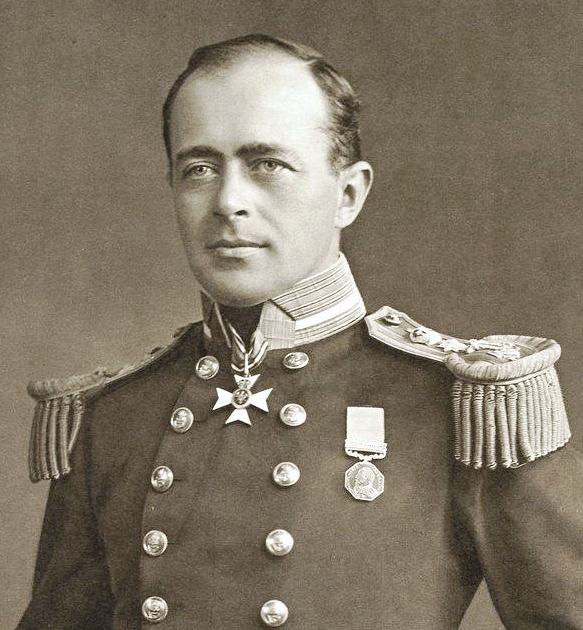 Robert Falcon Scott in full regalia: this was reproduced as a frontispiece for Scott's The Voyage of the Discovery (London 1905)
Following the news of his death, Scott became a celebrated hero, a status reflected by memorials erected across the UK. However, in the closing decades of the 20th century, Scott became a figure of controversy, with questions raised about his competence and character. Commentators in the 21st century have regarded Scott more positively after assessing the temperature drop below −40 °C (−40 °F) in March 1912, and after re-discovering Scott's written orders of October 1911, in which he had instructed the dog teams to meet and assist him on the return trip. The degree of Scott's personal culpability, and more recently, the culpability of certain expedition members, remain controversial.
From Wikipedia, the free encyclopedia
Tweet