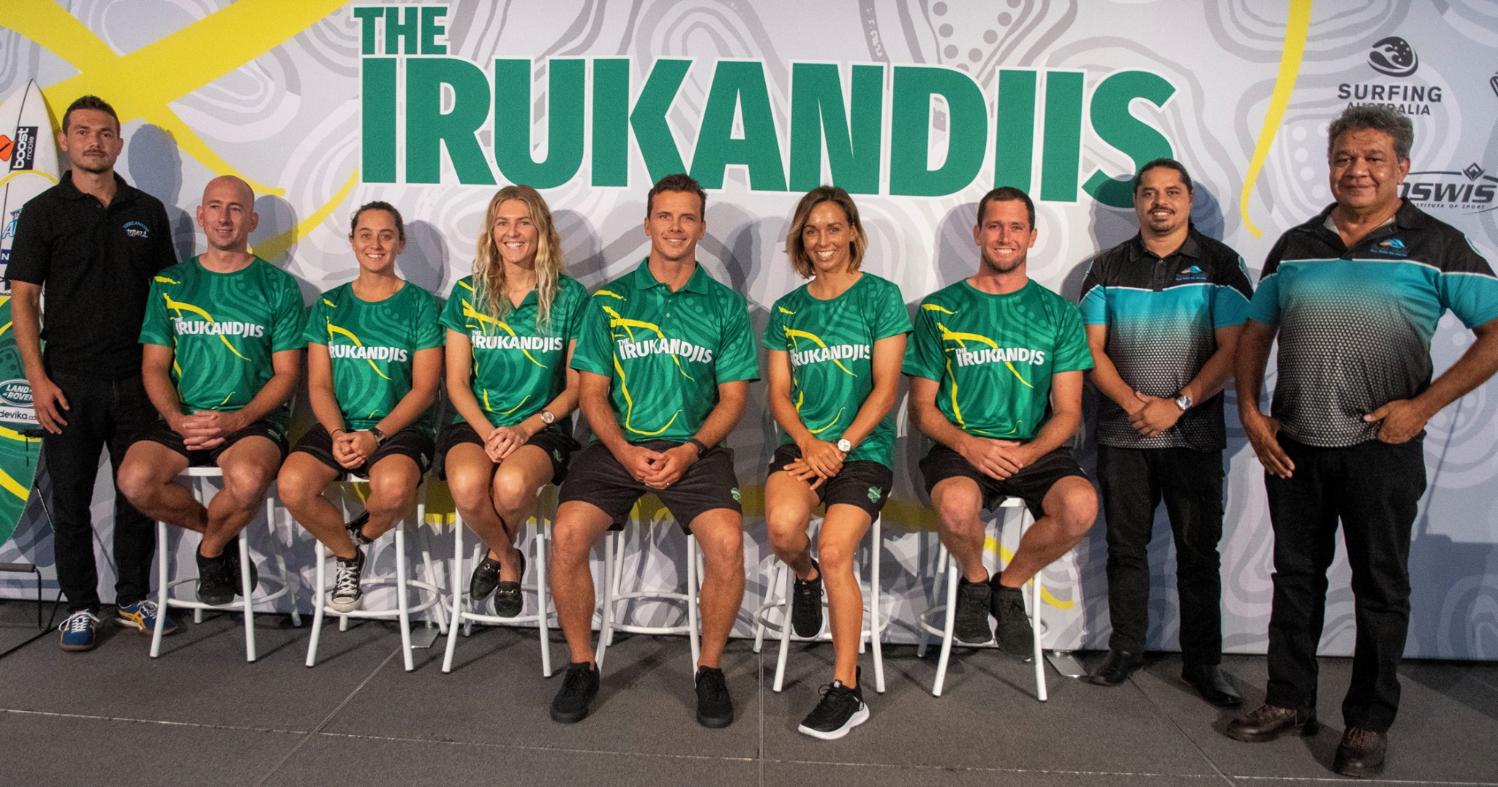 In a historic moment for Australian Surfing, a new team name and identity was unveiled March 17th 2021 at the Novotel in Manly for Australia’s national surf team. The much-anticipated new namesake and tagline was revealed to be ‘The Irukandjis: Deadly in the Water’, after the Irukandji jellyfish – an extremely venomous species of jellyfish that inhabit Australian marine waters.

“They pack a serious punch, just like our Australian surfers in the water”, said Surfing Australia CEO, Chris Mater, of the name that will lead Australia’s inaugural Olympic surf team’s debut into the Tokyo games this July.

Led by Stephanie Gilmore, the Australian Olympic surf team collaborated on the name and unanimously agreed on The Irukandjis, noting their commitment to be ‘deadly in the water’.

Seven-time World Surf League (WSL) World Champion and Australian Olympic team member, Stephanie Gilmore said: “I really wanted us to find an awesome name for the team that incorporated the Indigenous culture of Australia. Irukandji perfectly suits our team as we try our best to be ‘deadly in the water’ against our rivals in the Tokyo Olympics.”

The team branding and uniforms were developed in collaboration with BWM Dentsu and Indigenous artist Jasmine Craciun, who derived inspiration from her ancestors, the Barkindji people. The organic shapes on the uniform represent fluid movement within the water and emulate light hitting the ocean when viewed from below. With The Irukandjis representing Australia on the world stage, the incorporation of Australia’s national green and gold colour palate is a dominant factor in the design.

Chairperson for Surfing Australia and seven-time world champion, Layne Beachley said: “Our name and identity are powerful forces. As surfing enters the Olympics for the first time and enjoys incredible popularity worldwide, it was time to give our Australian team an identity that we can all rally behind. The Irukandji’s sting in the water is ferocious and that is how our Australian surfers approach competition.”

On Thursday March 25th 2021 the Grand Start of the Olympic Torch Relay for the Tokyo 2020 Games in 2021 began. The flame has commenced a 121-day journey across the 47 prefectures of Japan.

The Olympic flame was used by the Grand Start torchbearers – members of the “Nadeshiko Japan” women’s football team – to light the torch, marking the beginning of the 121-day Tokyo 2020 Olympic Torch Relay.

The Tokyo 2020 Olympic Torch Relay continues a long tradition of torch relays that have become emblematic of the Games. From London 1948's Relay of Peace to the "Down Under" relay of Sydney, each relay has been unique in its own way.

The concept behind the Tokyo 2020 Olympic Torch Relay is "Hope Lights Our Way", uniting the Japanese people around messages about supporting, accepting and encouraging one another.

The Olympic flame will not only symbolise the sunrise of a new era spreading the hope that will light our way, but will also serve to spread the joy and passion of the Japanese around the Olympic Movement as the Games approach.

Over the course of the torch relay, as many as 10,000 torchbearers will be responsible for carrying the Olympic torch across Japan to its final destination in Tokyo. On average, torchbearers will each run a distance of around 200m and will transfer the flame onto the next torchbearer using one of several torch kiss poses.

People from all walks of life have volunteered to be torchbearers, each with their own personal reason for wanting to take part. These include NAKAGAWA Kiku, whose great-grandfather made the torch for the Tokyo 1964 Games, KONISHI Hiroyuki, a PR ambassador who has lived with cancer for 15 years and YUHEI Sekino who is running the relay for his younger brother.

And there are many others who are working behind the scenes to make the Olympic Torch Relay an unforgettable occasion.

Wherever you are in the world, getting involved in the Olympic Torch Relay on social media has never been so easy. Show your Olympic spirit or send a message of encouragement to the torchbearers by posting on social media by using the following hashtags: #Tokyo2020, #HopeLightsOurWay, #TorchRelay, #StrongerTogether and #OlympicFlame.