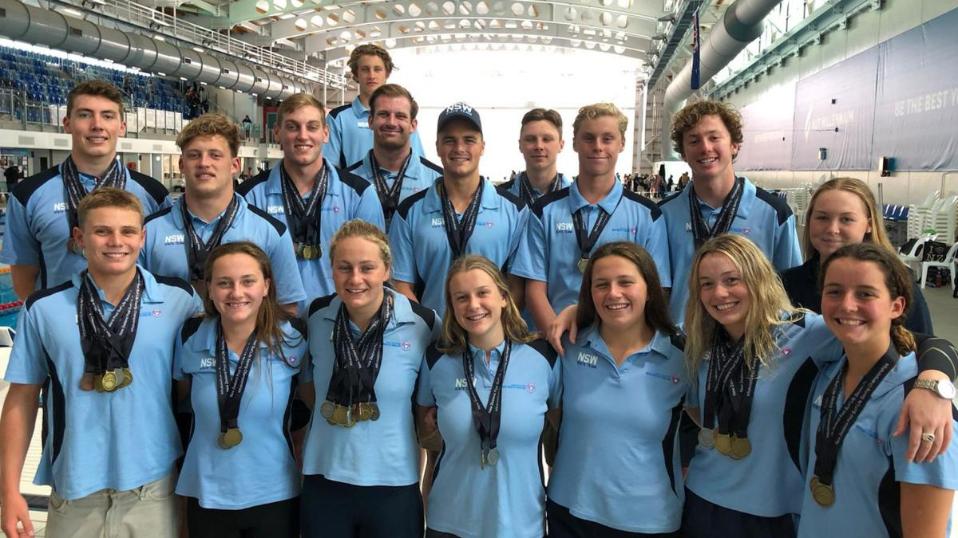 The state’s best Pool Rescue athletes have returned to Australia with a trove of 39 medals after cleaning up at the New Zealand National Championships on the weekend.

The team, which was selected based on their excellent results at the NSW and Australian Pool Rescue Championships, travelled across the ditch to put their skills and speed to the test against the Kiwis.

Over two-days the NSW athletes competed in all divisions including the coveted Super Lifesaver event. For the first time, the team entered Open competitors who came up against the likes of New Zealand pool superstars Steven Kent and Chris Dawson.

NSW has sent a team to compete in the championship event since 2016, using it as a development opportunity for athletes only. This year the team was made up of state and national champions including Australian record holder James Koch. The athletes were accompanied by Head Coach Sue McCaughtrie (Brunswick SLSC), Assistant Coach Tom Simpson (Shelley Beach SLSC) and Team Manager Max Gonzales (Bronte SLSC).

Max Gonzales said this year the team was opened up to Under 16s, Under 19s and Open divisions to assist with the lead up to the Commonwealth and Royal National Pool Championships. “This year has been the most successful year for us yet as a result of creating this additional major meet for our athletes,” said Gonzales.

“Not only does Pool Rescue provide the perfect opportunity for maintenance of rescue skills and techniques in preparation for the patrol season,” said Gonzales, “for those who also compete in beach and surf events it puts them in the ring to be selected to represent Australia at the World Championships.

“It’s also a great opportunity for us to see how the New Zealanders are working with their clubs and athletes to promote Pool Rescue and develop the pathways to strengthen the sport as a whole in NSW.”

Tom Simpson said the entire team performed at their best. “The expectations of the team were quite high based on their outstanding times at the state and Australian Championships,” said Simpson. “Many of them were aiming to outperform their personal bests despite coming off the back of a big training block. To return home with so many medals is amazing.”

Highlights include James Koch’s (Shelley Beach SLSC) gold medal in the Open Male 200m Super Lifesaver event. “This is one of the most grueling events testing all capabilities of athletes under the pressure of the clock,” said Tom. “James achieved his gold in 2:13.68.”

A talented swimmer in the pool and the surf, James is a two-time recipient of the Saxon Bird Memorial Trophy at the NSW Championships. “It’s great to see him transition into Pool Rescue racing and expand his success as an multi-faceted athlete,” said Simpson.

Champion Ironwoman Emily Doyle (Newport SLSC) also had a great result in the Under 19 Female Super Lifesaver improving her Australian Championship gold medal time and taking a silver medal with a time of 2:30.68. Doyle achieved a first place in the 50m Manikin Carry along with a number of other individual and team medals.

From Cudgen Headland SLSC, Lily O’Sullivan and Joey Warne made their representation worthwhile with Joey taking out the Under 19 Male 100m Manikin Tow with fins while Lily took second in the same event. This is 14 year-old Lily’s first year competing in Pool Rescue and she has already claimed both NSW and Australian titles.

Athletes who competed in the teams and relay events also performed at a high level across the board with 16 medals in total returning to Australia.

Surf Life Saving NSW Director of Surf Sports Don van Keimpema said it was great to see the NSW team continue their success internationally after a big year on home turf. “Pool Rescue is one of our fastest developing surf sports and it is really complementary to our athletes and lifesavers,” said van Keimpema.

“Taking opportunities like this to travel internationally and continue to refine their skills for individual and team events is so important. For the team to return home with the success that they have is a bonus and we’re very proud of them all,” he said.