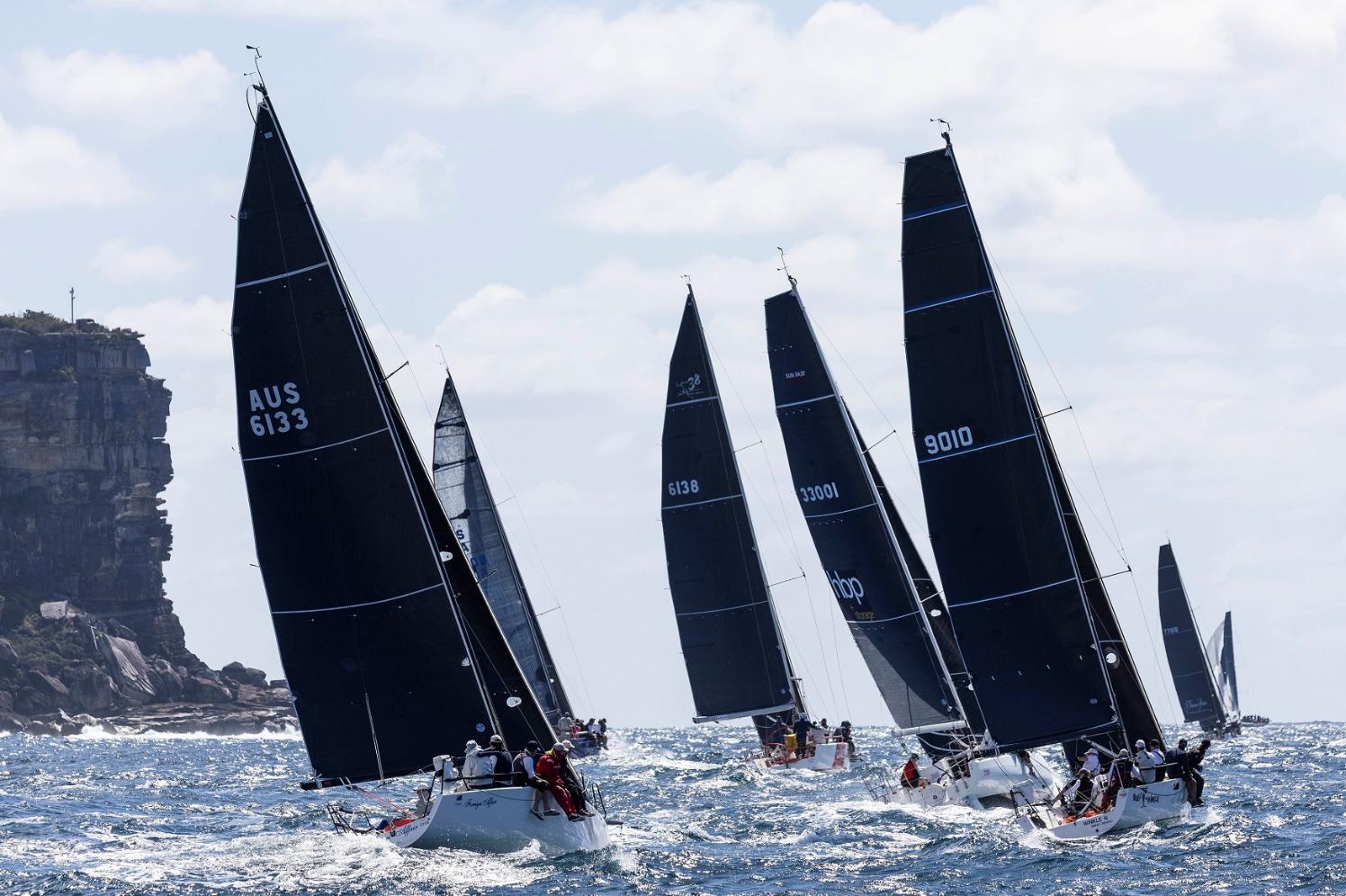 Victoire and Advanced Philosophy were the outstanding recipients of wins in summer like offshore conditions on the opening day of the 2022 Nautilus Marine Insurance Sydney Short Ocean Racing Championship (SSORC) today.

Division 1 of Middle Harbour Yacht Club’s (MHYC) 45th running of the event went to Victoire, Darryl Hodgkinson’s Carkeek 40. Victoire took a little over a minute out of Keiran Mulcahy’s King 40, Soozal from Pittwater and Bob Cox’s DK46, Nine Dragons in the race to Lion Island on Pittwater.

Hodgkinson explained, “I just got back from New Zealand last night and arrived at the boat today. We have a new Code Zero which we used and what a weapon! The wind hiked up to 15-16 knots and the sail was perfect. Holy moly, we flew. We were first out of the Heads and kept up with the TP52s all the way to the Island. Of course they got away from us upwind.”

Commenting on conditions, the Sydney yachtsman, a past winner of the Rolex Sydney Hobart said, “It was a lovely day out. Sunny, breeze kicking in from 10-17 knots. The sea was a little lumpy, but nothing worth getting upset about.”

Over the moon with their win and his new sail, ‘Doctor Darryl’ continued, “They can go home tonight and worry about us, but I don’t think we’ll do as well on the windward/leewards tomorrow as we did offshore today.”

Division 2 went to MHYC stalwart, Peter Sorensen’s Advanced Philosophy, which in his words, “Cleaned up,” on his rivals. The Sydney 38 scored a five minute victory over Jack Stening and Colin Gunn’s Sydney 36, Stormaway and over 10 minutes to third placed Foreign Affair, the Farr 30 owned by Matt Wilkinson.

“We even beat Division 1 boats,” a chuffed ‘Sorro’ said. “I’m very pleased with myself and the crew. It’s good to know I’ve still got it at 80 years of age! “

The race started in a 12 -13 knot sou-sou-easterly. As day wore on it went from 145 degrees to 100 degrees on the offshore course, equating to a spinnaker run to Lion Island and a tight reach coming home.

“On the spinnaker run up, we stayed close inshore - that’s the golden rule – stay out of the southerly current.  It paid off to go inshore and we went in dead square. Khaleesi and all those big boats (Division 1) went out to sea and when they came back in, they were with us.

“It was one of those lovely days on the water and all worked well today. I’ve got some pretty good guys on the boat and we sailed the boat well. We got there today because we went the right way and did the right things. Tomorrow is another day and a different race format…”

MHYC plans to run three windward/leeward races offshore tomorrow, which may mix the results up.

All information, including full results at: www.ssorc.mhyc.com.au

Andy Forbes Georgia Express got the gun in Division 1 of the fun Seven Islands Race. “We won,” said a pleased Forbes.

“I had crew missing, so we raced with reduced numbers. We decided to go out and have fun, but the conditions were so good, we thought we’d go out and pass everyone we could!

Forbes said they enjoyed a fantastic run down the Harbour under spinnaker. “Once we got around Birkenhead, it was about ticking the boats off and keeping on going. We caught the last ones in the last 500 metres of the race.”

The fleet enjoyed a breeze of 17 knots that dropped down to 9 knots during the race.

“I was about using the right sails at the right time. We pretty much used the full inventory,” Forbes said, laughing.

“Everyone knows the boat well now, so sail it well together. We sail the boat with a 50/50 male female split and have debrief before and after each race. It was a golden day out and such fun,” Forbes ended.

A family outing on Gary Carless’ Renaissance, turned into a special 21st birthday celebration for his grandson Shannon. The Northshore 369 beat Simon Dunlop’s Ellipse and Chris Skinner’s Martela to claim the Division 2 bounty.

“We had three generations of Carless’ on the boat, the youngest, Shannon, turned 21 today,” said a thrilled Gary Carless. “There was myself, two of my sons, two grandsons and my wife Janice on board. We all enjoyed the day and it was a pretty nice way for Shannon to spend his 21st.

“It was a beautiful breeze,” Carless expounded. “We worked out of Middle Harbour, then cracked a spinnaker to Cockatoo and Spectacle Islands and worked back in a lovely 10-15 knot easterly.  My family lined up for this race and the Sydney Harbour Regatta each year.

Held on the Harbour each year, the Seven Islands Race attracts a mixed keelboat fleet. It starts off MHYC pursuit style and the first to the finish post back at the Club claims the trophies in each division.

The 2022 Nautilus Marine Insurance Sydney Short Ocean Racing Championship (SSORC) concluded late this afternoon with two out of the three windward/leeward races completed; the final Race 4 abandoned as the light breeze fell away to nothing before a thunderstorm arrived.

Although he didn’t win a race, local sailor Bob Cox was the most consistent performer in Division 1 of Middle Harbour Yacht Club’s (MHYC) annual event. Cox and his DK46, Nine Dragons, scored a third yesterday. Today’s second and third places helped him to the top of the podium following the abandonment of Race 4.

MHYC Commodore, Rob Aldis, won the second race of the day with his DK46, Khaleesi, to finish fourth overall. Soozal stopped the top three results from being an all-DK46 party.

Cox could not wipe the smile off his face: “We were trying to win a race but we also wanted to minimise risk to pull out the best result we could. It was very fluky today,” he said.

Marvelling at being able to race against two sisterships in LCE Old School and Khaleesi, Cox recounted, “Yesterday the three DKs were side by side and pretty much stayed like that all the way to Lion Island. We had to cross the other two to get closer to shore. That was good racing.

When we got around, we were obviously aware of the other two.

“Getting into the Harbour was difficult though. We put the Code Zero up, then tried the running kite and ended up putting the Code Zero up again. We got second to Victoire. She was very quick.”

Cox said he was appreciative of the good contingent of boats from the RPAYC. “We’ll return the favour by going to their Pittwater Regatta early next year. Khaleesi came to the fore later in the regatta and it was good to see Ian Box’s new set up on Toy Box has worked – the boat is faster. Overall, it was a very good fleet.

“The DKs are aging and so am I – I’ll be 78 in March. I’ve had a bad leg, so the crew had to help me get from side to side this weekend. Full congratulations and thanks to the crew – they were very focussed,” Cox finished.

Second placed Mark Griffith said today was light and hard work with a bit of chop. “It made it difficult to keep the boat moving and that was the key to winning. Three DK46s. It was very close, but Nine Dragons was more polished. We look forward to racing against them all again at our Pittwater Regatta in February.”

Griffith continued, “Middle Harbour Yacht Club put on a great regatta. The best is the fantastic camaraderie between the DK46 crews and the rest. We’ve loved every minute of it.”

Gunn commented, “Sorro and Conspiracy (which sailed in ORC) sailed fantastically well this weekend. We feel so sorry for Sorro – there was some confusion and I’m sure he would have won had he not retired from the second race today. We were working so hard to stay anyway near them.”

Gunn said he and Stening were surprised and happy to pull the win out of the hat: “Just shows that sometimes sailing is a bit of a lottery. You can’t stop until the race is over,” he said. “We had a wonderful weekend. Yesterday was just glorious.

“We express our gratitude to all the boats that came down from the Alfreds, making it a good competition. And we have great appreciation for the organisers at Middle Harbour Yacht Club,” he ended.

Division 2 looked likely to go to Sorensen’s Sydney 38, Advanced Philosophy, however, he retired from the shortened race amid some confusion.

Racing was away from 11am on the Manly Circle with three windward/leeward races planned. The day looked like it was going to be a good one breeze-wise, but as the first race progressed, the breeze lightened.

The second race was shortened for Division 1 and then Division 2 and race officials were given no alternative but to abandon their efforts to hold the third race.

Middle Harbour Yacht Club is next looking forward to the Nautilus Marine Insurance Sydney Harbour Regatta to be held on the first weekend in March. The Notice of Race has been published and online entry will open in early December at: www.shr.mhyc.com.au 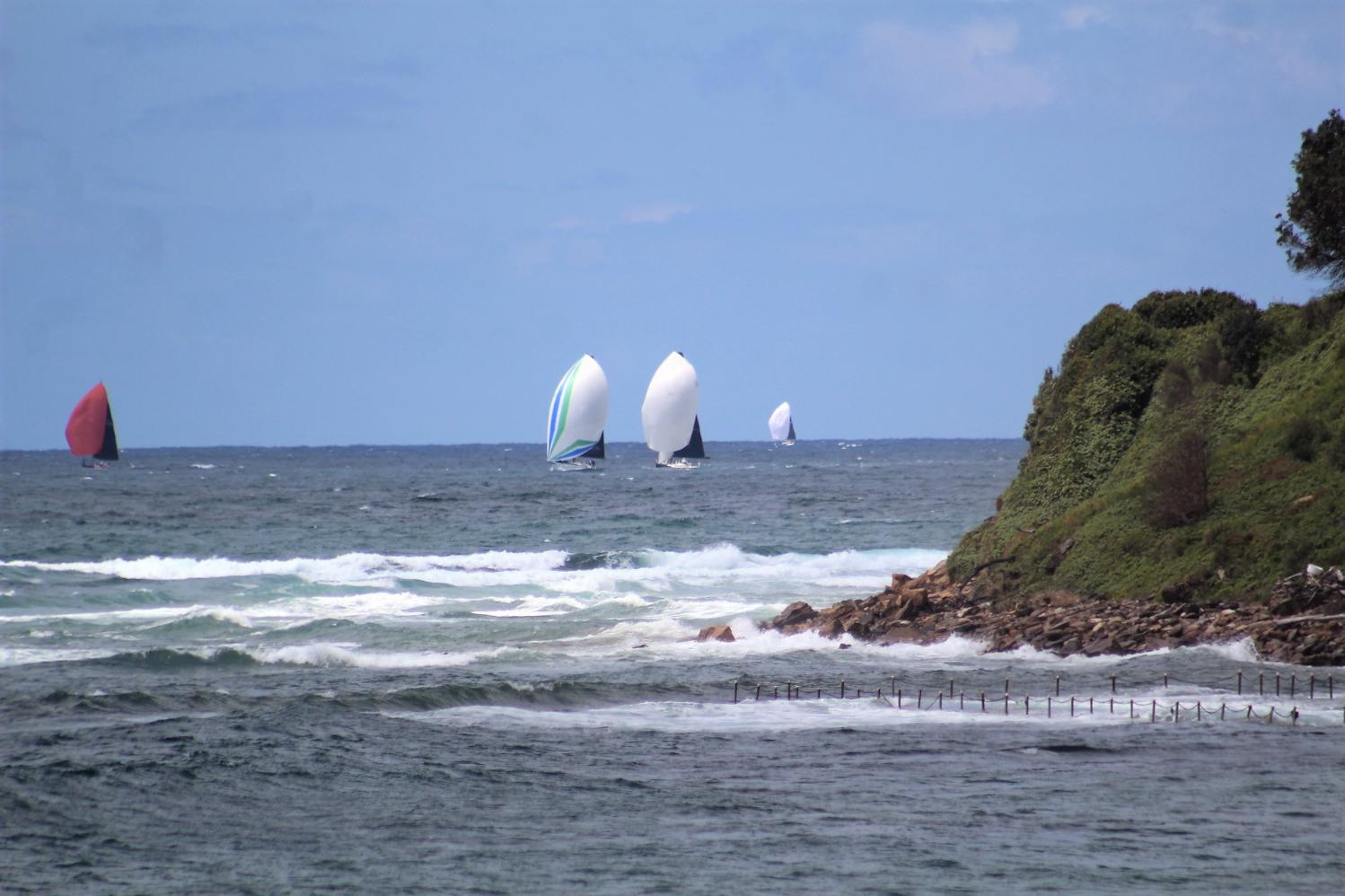 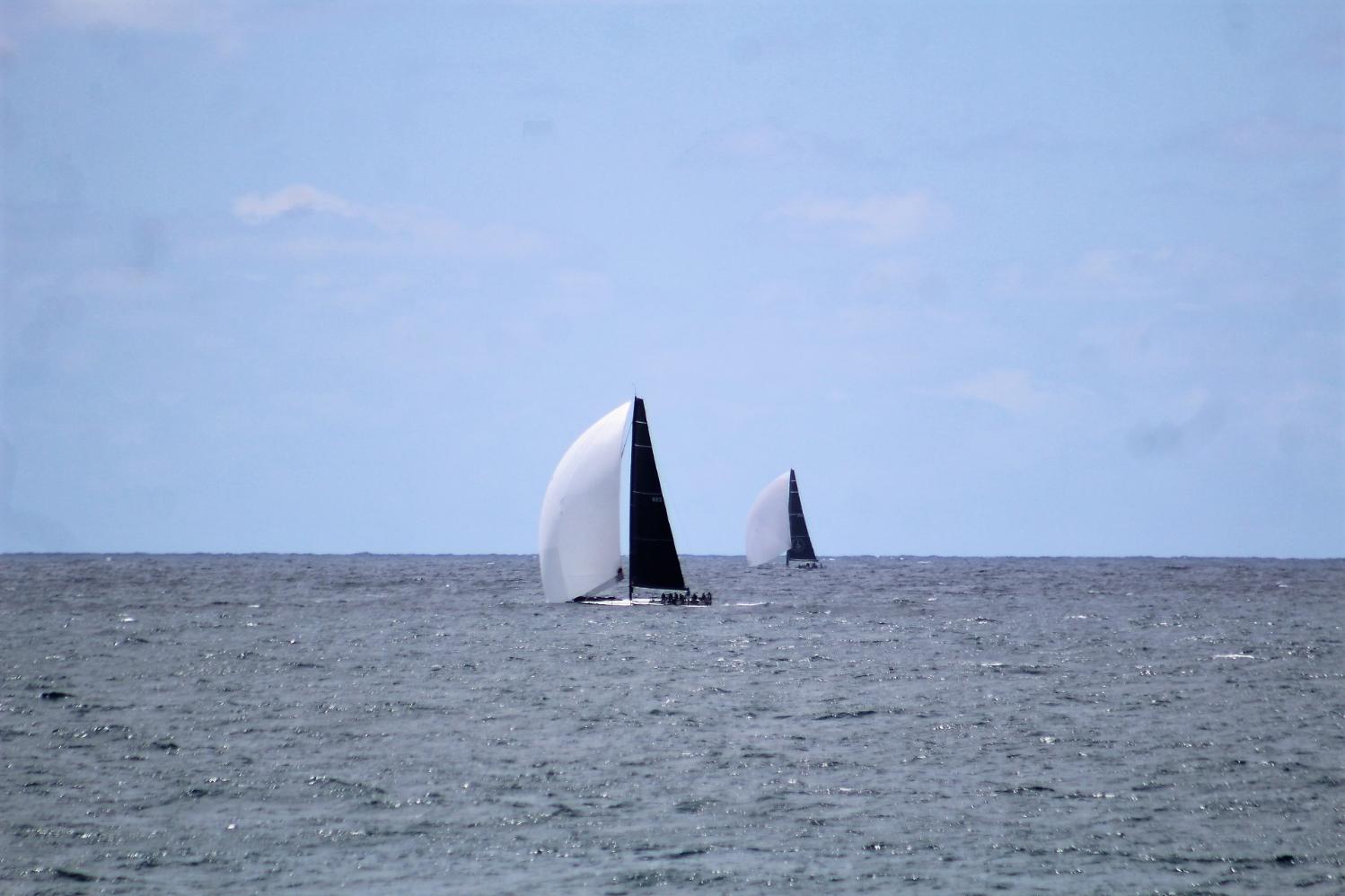