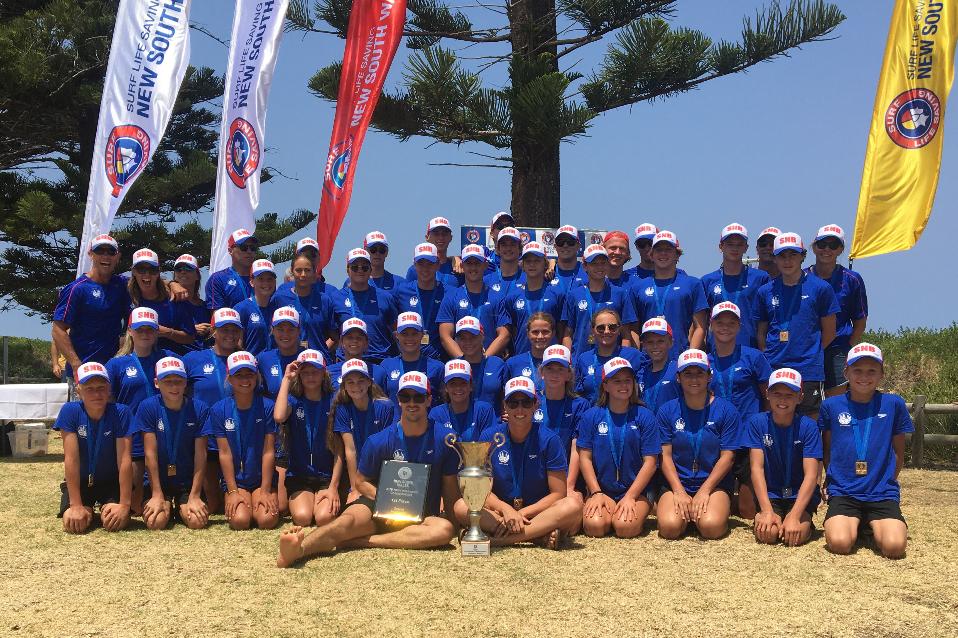 Sydney Northern Beaches athletes have cemented their place at the top by winning the 2019 NSW Interbranch Championships for the third year in a row. Nudging out close rivals Sydney Branch by just a handful of points, the Sydney Northern Beaches (SNB) team put everything they had into winning in the tough conditions at Bulli Beach this weekend (December 7-9).

“It was definitely a lot harder this year, everything was unpredictable. The win was a testament to everyone’s skills in very interesting and tricky conditions.

“To throw in the large surf meant we couldn’t count on some of the results this time. The younger kids did so well getting around the course in those conditions.

“It’s always a good battle with Sydney, point for point. It was really close. I couldn’t be prouder of the team,” said Maddi.

Spoiled for choice, SNB fielded strong competitors across virtually every age division. In the U15s, Jake and Mitch Morris and Kimberley and Katelyn Doyle did what was asked of them in individual and teams events.

Ella Garrett and Piper Harrison were first and second in the Youth Ski Race and Emily Doyle and Zac Morris took out both the Open Surf Races. Noah Maggs was outstanding in the Under 12s and clocked up wins in the Swim, Board and Iron races.

Despite being pipped at the post for another year, Sydney Branch competitors put in impressive performances in every race, including teams and individual, in the water or on the sand.

Winner of the Youth Beach Flags, Lucy Flanagan from North Cronulla SLSC, said it was great to race against the best athletes in the state.

“It’s a really great honour to be here with all the great athletes from everywhere. In Sydney we’re all so close as a team and you have to trust in yourself. At Interbranch every wave counts, every point counts,” said Lucy.

Peter Thoroughgood showed his versatility with a win in the Youth Male Beach Sprint on Day 1, then he was part of the team win on Day 2 in the Youth Taplin Relay.

Hunter Branch had some great performances in the water and on the sand to end up in third spot on the podium and Central Coast Branch claimed fourth position while the Far North Coast was the top performing country Branch in fifth place.

Bella Williams from Cooks Hill demonstrated why she is a competitor to watch in future, taking out the Youth Ironwoman race, gaining valuable points for the Hunter Branch.

Hunter athletes recorded wins in many of the teams events including the Under 12 Mixed Board Relay and the junior and senior Male Board Rescue Relays.

The annual championships event pits representative teams from each branch of Surf Life Saving in NSW against one another in a display of superior lifesaving skills, fitness and teamwork.

Open Ironman Champion Luke Chaffer from Far North Coast had the skills and experience to push out the others in the strong field while Zoe Clarke from Central Coast Branch caused an upset to take out the Open Ironwoman.

Clearly hungry for the win, Zoe literally threw herself across the line, collapsing on the sand after a ding dong battle against one of the race favourites, Manly’s Emily Doyle.

“I was not expecting it at all especially with the ski leg first, I’m not the greatest ski paddler. I’ve been sick too. I’ve never competed against Emily and I thought, this is my opportunity so I just went for it,” said Zoe.

In the youngest age group, Tahj Hamilton from Central Coast was enjoying his first Interbranch Championships and came away with a win in the U12 Male Beach Sprint.

For the team that travelled the furthest this year, the Far North Coast Branch didn’t seem to suffer from the trip. Their performances and team spirit was high as always. In the Under 14s, Maalik Moston took an early win in the Male Ironperson and the Open Male Board Team was happy to take the points in their race.

Far North Coast competitor Hayley Smith surprised herself with a win on her 18th birthday in the Open Female Board, claiming her fitness wasn’t as good as it could be.

“The girls are so strong, especially in Opens. I knew Jordy [Jordan White] was leading at the start and she’s really fast in the running part and I was just trying to stay on the wash because I knew I’m not as fit as them at the moment but if it comes down to a sprint I’m ok at that, so that was my game plan,” said Hayley.

Host Branch Illawarra gained solid points with good performances in many events, including several wins. Emma Walsh was the fastest across the sand in the U14 Female Beach Sprint.

Team veteran Hannah Minogue narrowly missed out on first place in the Open Ski race on her home beach, losing the top spot in the run up the beach and into the finishing chute.

“I was happy to get onto the wave but Emily had the legs in the end. Ski paddlers shouldn’t be made to run. If it was a metre shorter I reckon I would have had her,” said Minogue.

The hopes of the South Coast Branch team were with its high performing beach team from Mollymook. South Coast superstar, Sam Zustovich, held off veterans of the sand Blake Drysdale (SNB) and Michael Kember (Syd) to win the Open Male Beach Sprint. Club mate Payton Williams backed it up with a first in the Open Female Beach Sprint.

Jackson Walsh was a standout in the water with a first in the Under 14 Male Board Race.

The NSW Director of Surf Sport, Don van Keimpema, thanked the Bulli SLSC volunteers and work party for hosting a great weekend of racing and congratulated all the athletes, team managers, coaches and officials for their efforts.

“The team environment we had this weekend was absolutely fantastic,” he said.

Surf Life Saving NSW is pleased to announce the NSW Youth Pathway Cup representative team. The 20 Under 14 and 15 athletes will head to Alexandra Headland on the Sunshine Coast in January to defend their title.

The Youth Pathway Cup offers the best Under 14 and 15 athletes across beach and water disciplines the opportunity to compete at an elite level alongside the senior NSW Interstate team.

The 2020 event will be the third year the Youth Pathway Cup has been run. Established to support the development of Australia’s brightest young athletes, it is a team-orientated event where every race counts.

“It really is a great pathway for our future state, national and international athletes,” said SLSNSW Director of Surf Sports Don van Keimpema. “The event is in place to provide fundamental representative opportunities to young athletes already demonstrating talent in surf sports.”

Each state fields a team. Squads consist of five male and five female athletes in each age group who are selected for their versatility and results over the last season.

Head Coach Rachelle King (Terrigal) said selecting the NSW team was a tough process, “Last weekend’s Interbranch Championships at Bulli provided the opportunity for the athletes to state their case for selection. We’re lucky to have such a strong pool to pick from and are very happy with the squad we’ve chosen for January’s event.”

The 2020 Under 14s team has drawn from six of the 11 NSW branches. They will look to the Under 15s including Australian Champions the Morris brothers, to inspire them to defend their undefeated title.

The NSW Youth Pathway Cup team will go into camp on Wednesday 22 January 2020 with the competition to be held on January 24, alongside the Interstate Championships at Alexandra Headland, QLD. 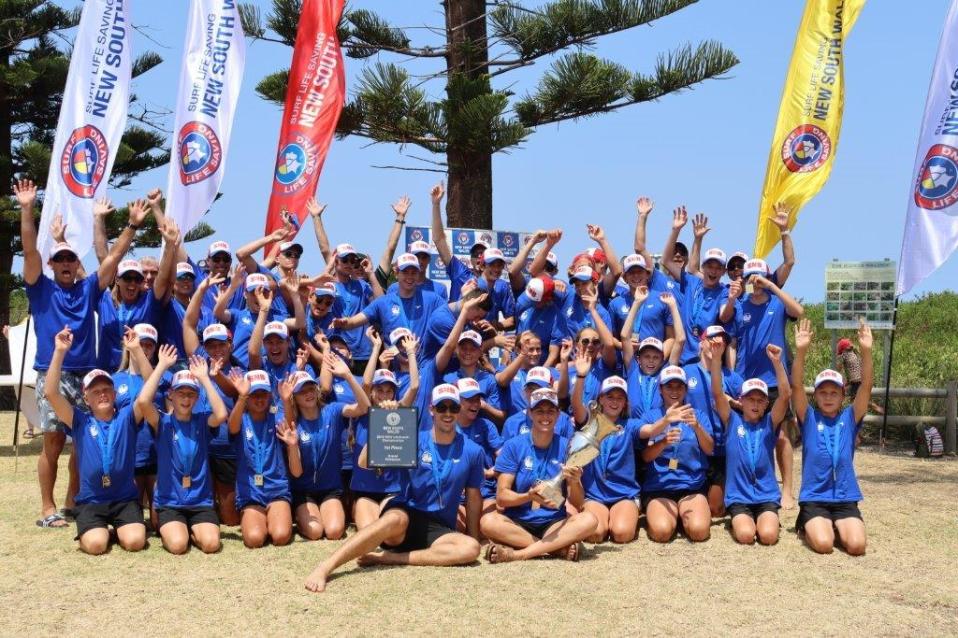