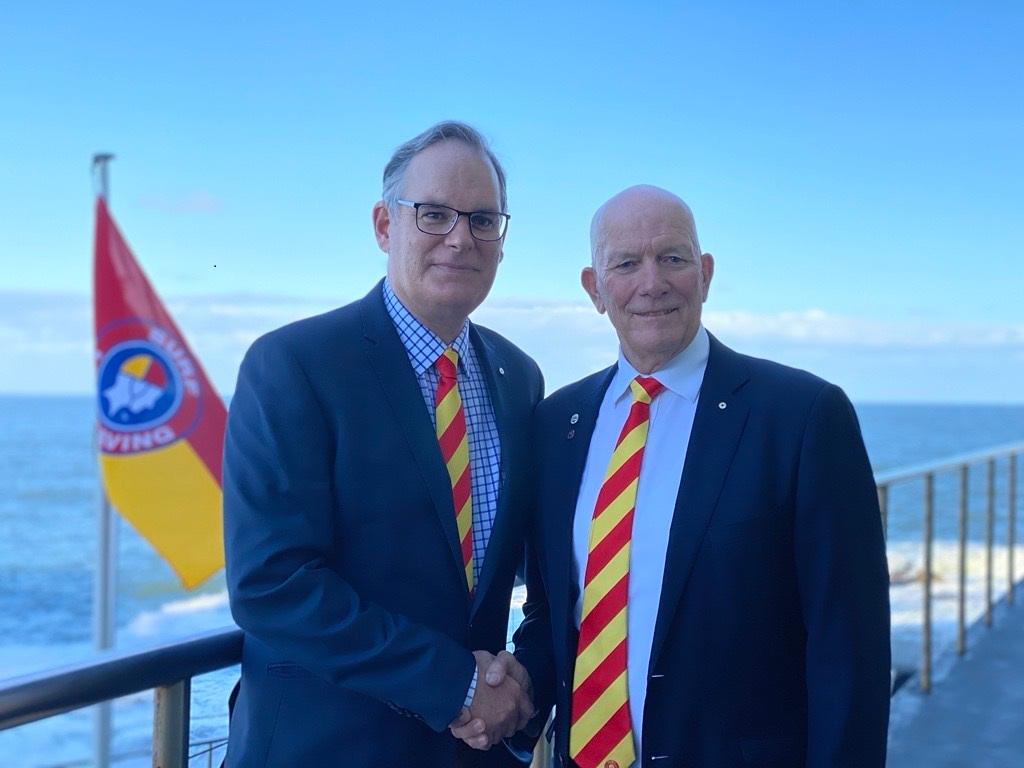 Mr Baker ESM will become the seventh president in SLSA’s 114-year history, taking over from outgoing President Graham Ford AM, who has served as President since 2010.

A Life Member of Brighton SLSC and SLS South Australia, Mr. Baker is the first member outside of New South Wales and Queensland to be elected President, and was extremely honoured, having served as Deputy National President of SLSA for the past five years.

“Surf Life Saving is very much apart of my DNA, I’ve been involved since I was seven, it very much defines who I am as I know it does many volunteers, so I am incredibly proud to be the seventh president,” Mr Baker ESM said.

“Surf Life Saving is a unique organisation; I think it’s probably the greatest humanitarian organisation in the world.

“There is no one else that does what we do as a vital emergency service around the country, an iconic sport, a youth organisation and also a training organisation and just a place where communities come together along the coast…it is quite unique.”

Mr Baker ESM has been an active patrolling member for over 40 years and has served as the President of Surf Life Saving South Australia for the past 10 years. He is the second longest serving volunteer crew member of the South Australian Westpac Lifesaver Rescue Helicopter Service and brings with him a wealth of Not For Profit Board experience including Australian Red Cross (SA), Virtual War Memorial Australia and The Smith Family (SA).

Mr. Baker ESM also paid tribute to outgoing President Graham Ford AM and said that the organisation was stronger because of his leadership over the past 11 years.

Outgoing President Graham Ford AM acknowledged Baker’s appointment and thanked members for their service and commitment to the movement during his time as President.

“I think he’ll (Baker) work with the organisation and our SLSA Board very well. He is Surf Life Saving through and through. He has that DNA in him as a volunteer and he can always talk with the volunteers and I think that’s one of the most important things to be able to do that.

“John’s been on the board now for nearly nine years, and he’s contributed a lot and he really does understand what makes Surf Life Saving Australia tick.”

Each year more than 280 people die due to drowning, with many more admitted to hospital following a non-fatal drowning incident. 41% of all drowning occurs in coastal environments (beaches, oceans and rocks).

SLSA President, Graham Ford AM, acknowledged the significant role of 44,345 active patrolling lifesavers across the country in preventing drowning. Deloitte Access Economics recently estimated that the actions of Surf Life Saving and surf lifesavers save 1,363 lives and prevent 818 critical injuries every year.

“SLSA is proud to play a significant role in delivering outcomes aligned to the Australian Water Safety Strategy and is actively delivering in all five priority areas being: people, places, activities, risk factors and populations,” said Mr Ford AM.

SLSA acknowledges the government’s commitment to working with us to reduce the drowning rate.