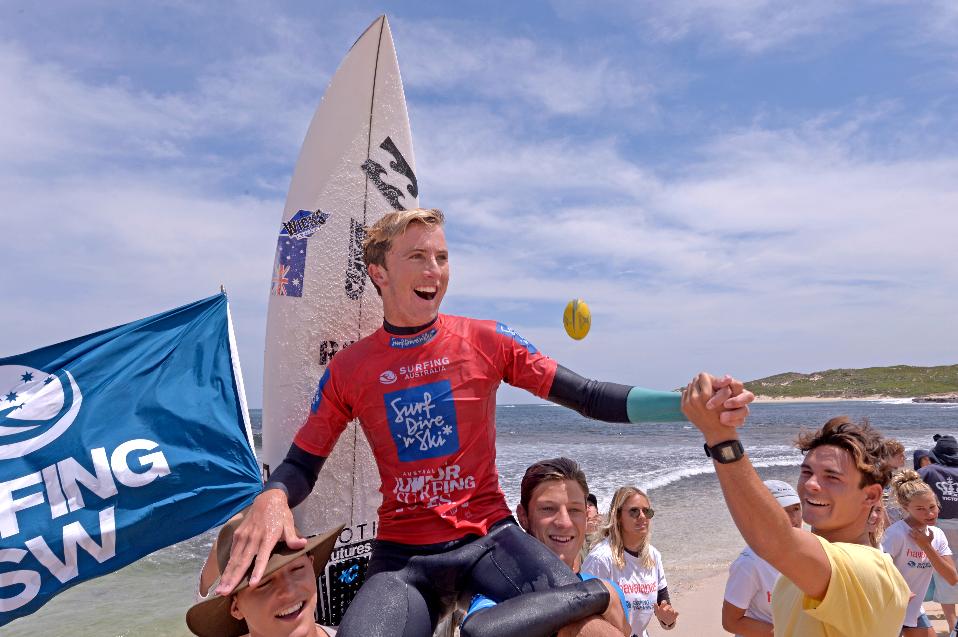 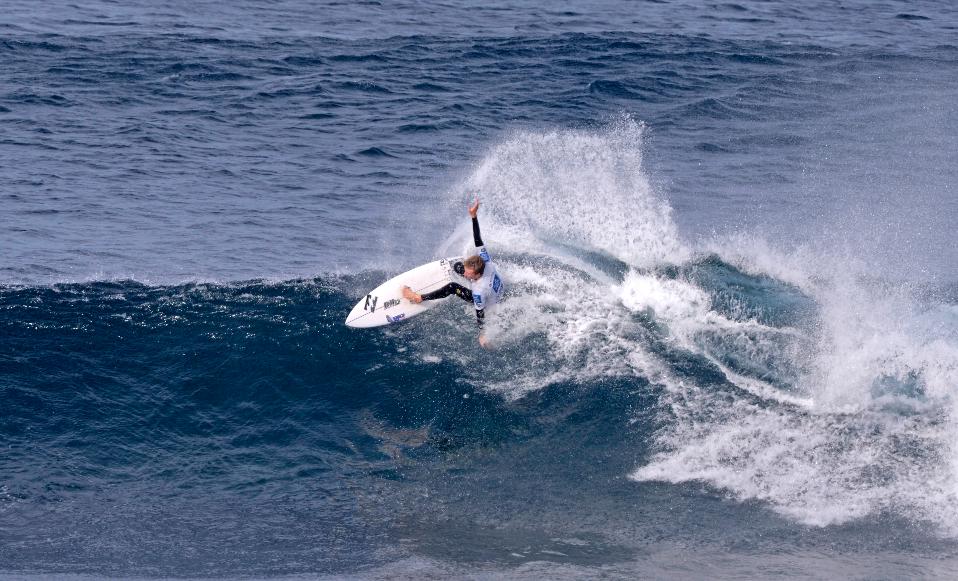 Durrant, one of the form surfers during the week of competition, went toe-to-toe with teammate Emma Cattlin in the Under 18 Girls final, the goofy versus natural foot battle being one for the ages. Durrant's rock-solid powerful backhand attack on the right-handers proved too strong (13.50 points to 11.35 points) for her fellow competitors at a wave she clearly knows well.

Victorians Ellie Harrison and Jazz Wylie went wave for wave in the Under 16 Girls final with under half a point separating the pair by the hooter, Harrison getting the win.

Young Queenslander and superstar in the making Jahly Stokes took out the Under 14 Girls division whilst Dane Henry (NSW) won the Under 14 Boys title to the delight of his team on the beach.

Champions were also crowned in Allstar and MR Shield Schools divisions - full results can be found at www.australianjuniorsurfingtitles.com

The 2019 Surf Dive 'n Ski Australian Junior Surfing Titles, which ran from the 30th November to 7th December, will again host individual divisions incorporating Under 14, 16 and 18 age groups along with Allstars and MR Shield Schools divisions.

In an action-packed day of competition at Margaret River’s Surfers Point, semi-finalists were decided across all Under 18 and 16 divisions in consistent 2-3ft surf.

Western Australian local lad Jed Gradisen almost produced the perfect heat in the Under 18 Boys division quarter-finals, nailing down a 19.10 point heat total to progress to the semis with Victorian former two-time Australian Junior Champion Xavier Huxtable. Earlier in the day, Huxtable posted a 17. 95 point heat total in round three and then backed it up with a 15.75 point total score in the quarter-finals.

Finn Cox (WA) then made it a day to remember for the west with an 18.25 point heat total to post the second-highest heat score of the day, just short of teammate Gradisen. Cox had New South Welshmen Jamie Thomson nipping at his heels in their quarter-final encounter, Thomson (17.50 points) finishing behind Cox by under a point.

In the Under 18 Girls draw Coral Durant (WA- 13.35 points), Ellia Smith (14.85 points), and Holly Williams (15 points) were impressive in winning their quarter-finals to book places in the semi-finals. 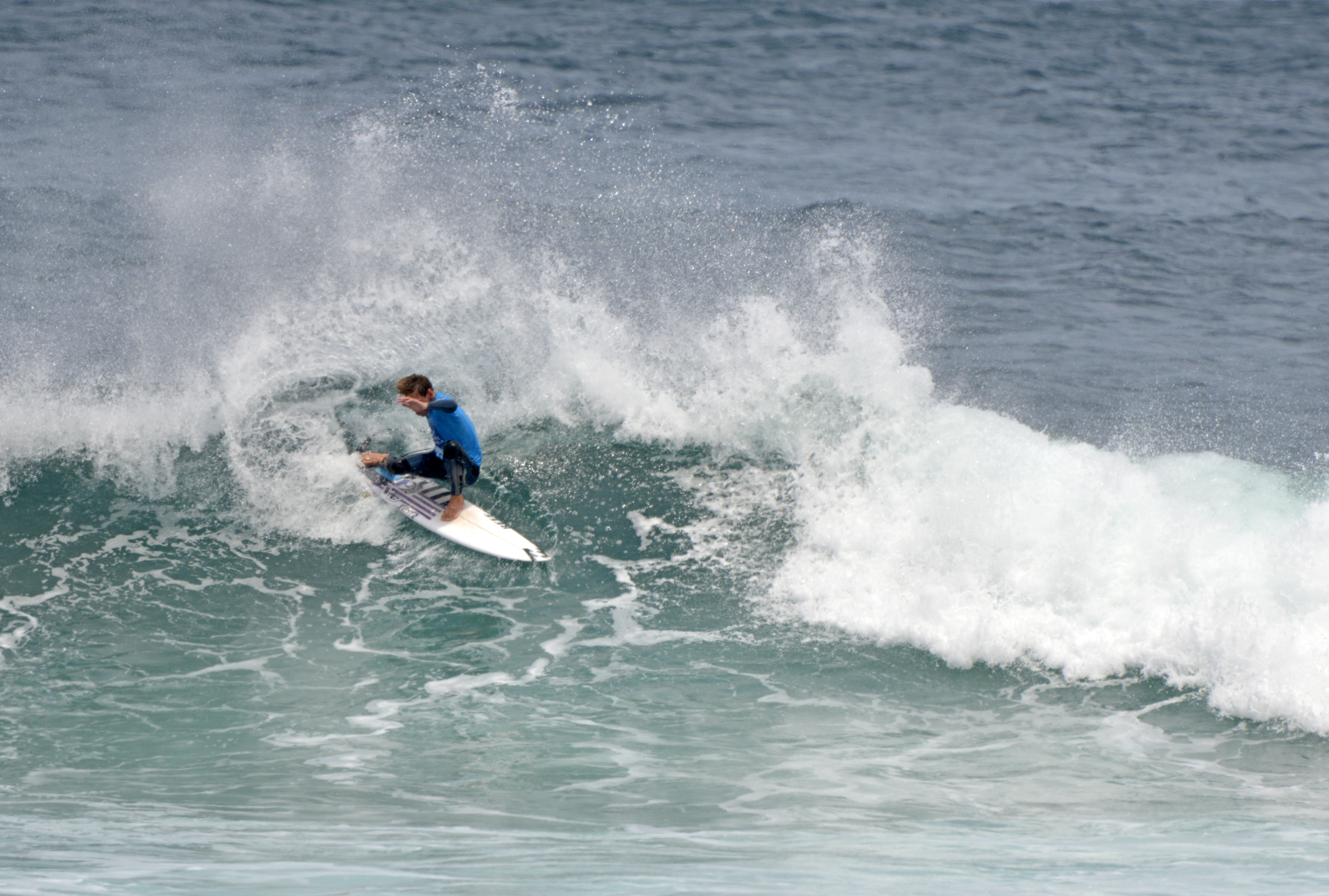 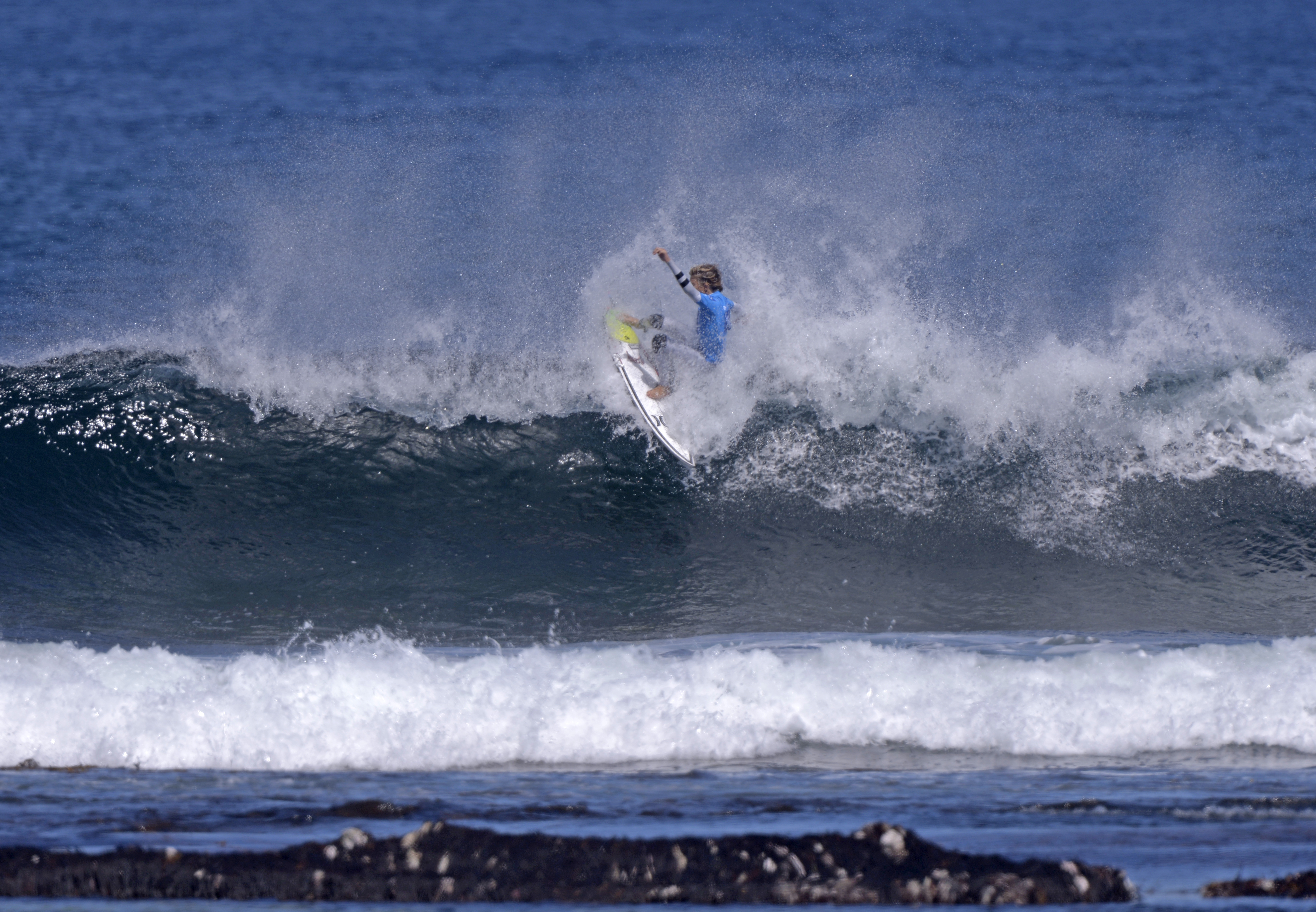 Two West Australians led the charge into the quarter-finals with great surfing in rounds two and three of the Under 14 Girls division. Kaleisha Launders and Isi Campbell posting 15 and 14.15 point heat totals in the tricky conditions. Urara Saito (QLD), Ruby Berry (WA) and Eva Bassed (VIC) also impressed on their way to booking spots in the quarter-finals.

Campbell, from Denmark right here in West Oz, was stoked to get through a solid heat draw, with the support of her team.

“It was a bit windy out there but the waves are fun. I’ve got Stomper (Mike McAuliffe), Luke Campbell and mum and dad are in my corner this week which makes it easier. They relax me and get me to calm down before my heat. The support of the whole team down on the beach, cheering us on is awesome,” said Campbell.

On the Under 14 Boys side of the draw, more homegrown talent was on display, this time Otis North (15.50 points) and Phoenix Wilson (13.50 points) impressing with wins in their round three heats. They join the likes of Hugh Vaughan (NSW), Dane Henry (NSW) and Rico Haybittle (QLD) in the quarter-finals. 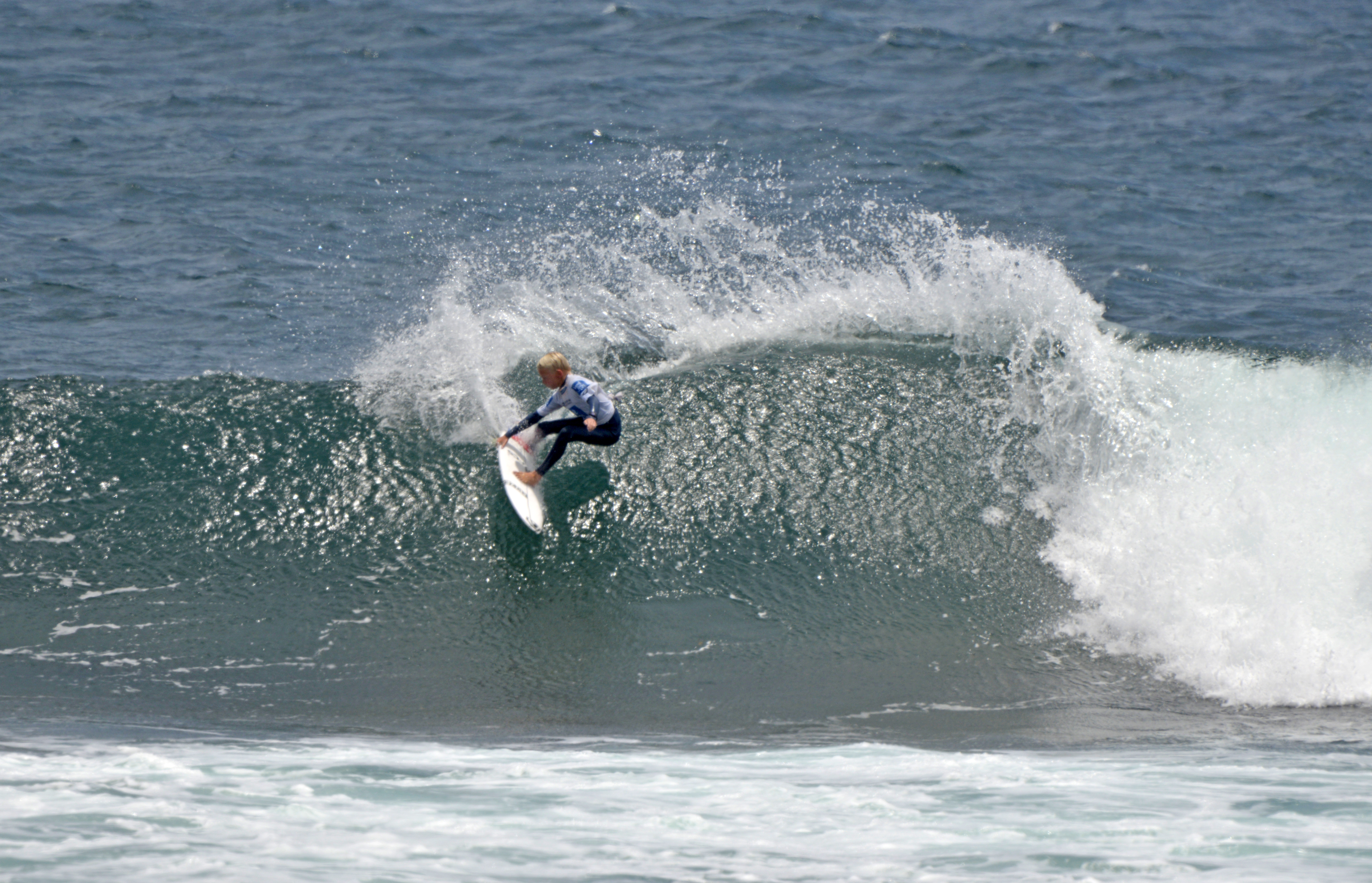 The youngest divisions at this year’s Surf Dive ‘n Ski Australian Junior Surfing Titles hit the water this morning and did not disappoint in the clean 3ft waves.

The first two heats of the day were dominated by Victorians with Willem Watson (13.97 points) and Lucas Hickson (15.43 points) getting their 2019 campaigns off to the best possible start.

Heats three and four were then taken out by New South Welshmen Fletcher Kelleher (13.33 points) and Dane Henry (13.34 points). Rico Haybittle (QLD-13.80 points) got one back for the banana benders in heat five before the biggest heat score of the round got the locals on their feet and cheering for Otis North. The young West Australian belted out a huge 15.50 point heat total to advance in style.

Excellent conditions greeted the Under 14 Girls for round one with almost no wind making for smooth, rippable wave faces. It was again a local in Willow Hardy (16.34 points) top-scoring for round one in what shapes as a great event for West Oz. 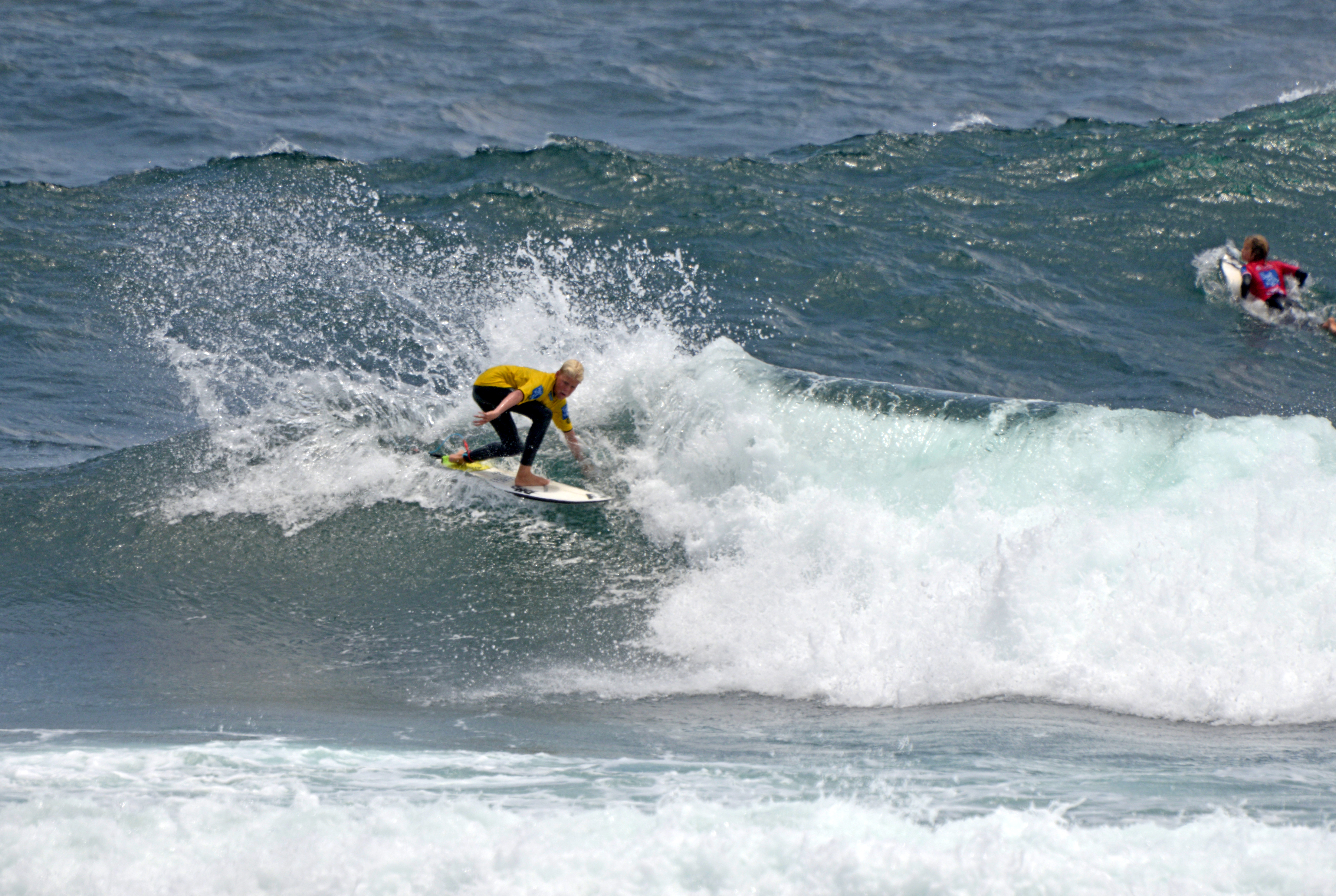 The level of surfing and swell ramped up on day two of the Surf Dive ‘n Ski Australian Junior Surfing Titles as the Under 18 Girls and Boys went mental at Margaret River’s Main Break.

Queensland’s Oscar Berry set the tone in the first heat of the day, going to the rail in magnificent fashion, hammering a huge 18.25 point heat total with his power and precision being rewarded on two right-handers.

Western Australia’s Jed Gradisen was another big performer on day two, local knowledge evident in the natural footer’s aggressive approach to Main Break, racking up a huge 17.40 point heat total to win his round one encounter and almost match Berry’s performance.

Former Under 16 World Champion Grayson Hinrichs (NSW) also fired an early warning shot to his competition, nailing down a whopping 17.25 points out of a possible twenty in heat six of the Under 18 Boys draw.

In what was one of the heats of the day, competition favourites Coral Durant (WA) and Nyxie Ryan (NSW) went wave for wave in heat four of the Under 18 Girls draw, both laying down serious scores. Durant (16.50 points) just getting the better of Ryan (15.25 points) in an exchange that could easily be replicated at the back end of the tournament.

Durant said: “It was really fun with nice waves and good to get a couple under my belt. To me, it’s such an honour to have the Surf Dive ‘n Ski Australian Junior Surfing Titles in my own back yard. It gives the Western Australian crew the chance to show our skills in bigger waves.”

Arabelle Gibson (WA) was another local to fire on day two, smashing her competition with a 14.50 point heat total to join the likes of Lily Macdonald (NSW-15.65 points) as frontrunners for the crown come Saturday’s finals. 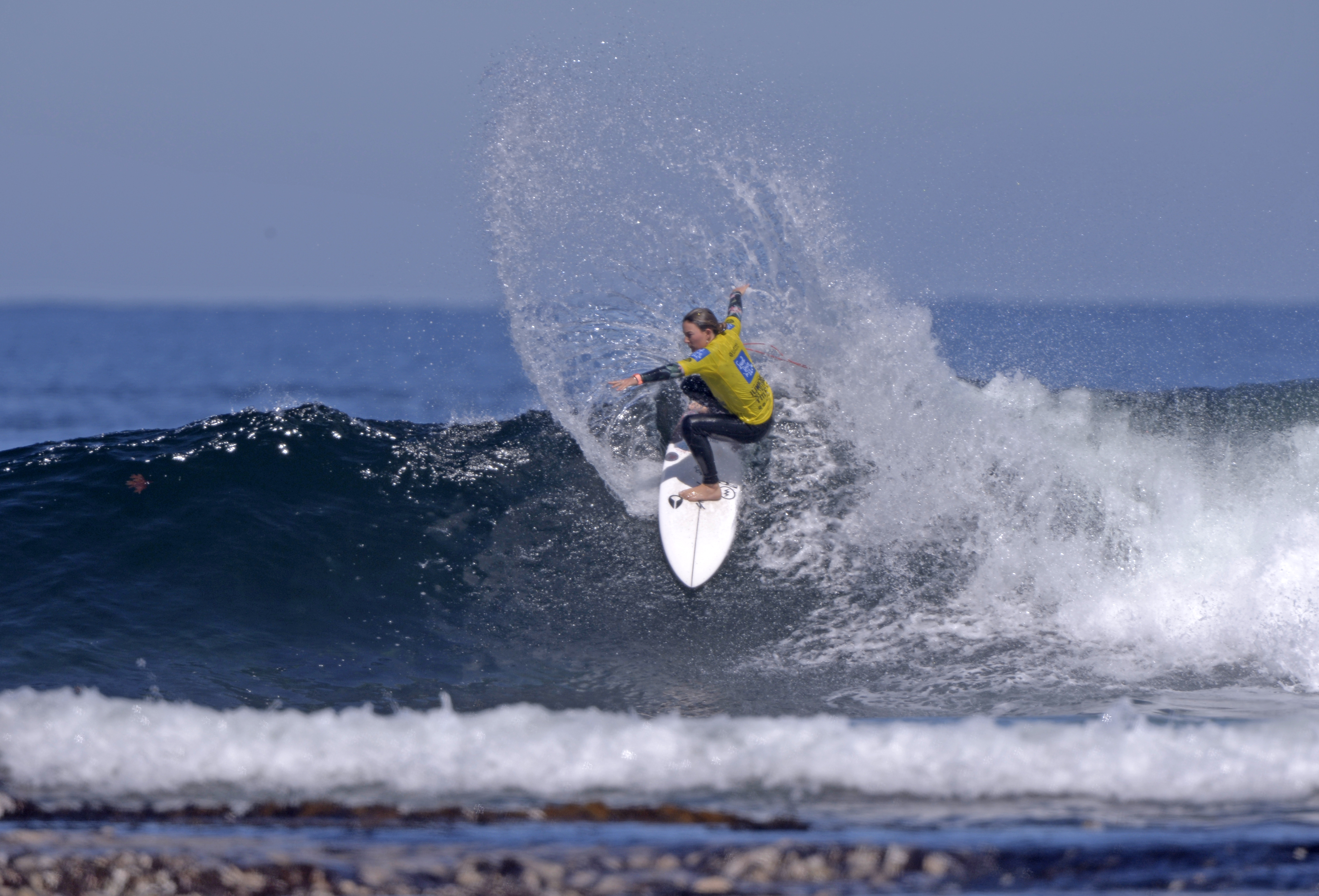 It was New South Wales teammates Xavier Bryce (13.25 points), Nate Hopkins (10.05 points), Jarvis Earle (14.00 points) and Kobi Clements (11.10 points) impressing early on in the day, all winning their round one heats. West Australian local lad Danny Benedetti (11.50 points) progressed directly to round three after finishing second to Bryce in heat one of the day.

Allstars and MR Shield Schools divisions also got underway on day one of competition.

Surfers Point will be the primary event location for the 2019 Surf Dive ‘n Ski Australian Junior Surfing Titles. One of the most consistent and reliable waves in the region and home to WSL Margaret River Pro. This event offers a unique opportunity for surfers to compete at a current Championship Tour stop.

A summer swell magnet, Main Break can deal with a variety of conditions and handles the prevailing afternoon sea breeze as well as any other wave along the coast. South Point in Gracetown is the backup location if the swell gets BIG.

The 2019 Surf Dive 'n Ski Australian Junior Surfing Titles, which will run from the 30th November to 7th December, will again host individual divisions incorporating Under 14, 16 and 18 age groups along with Allstars and MR Shield Schools divisions. 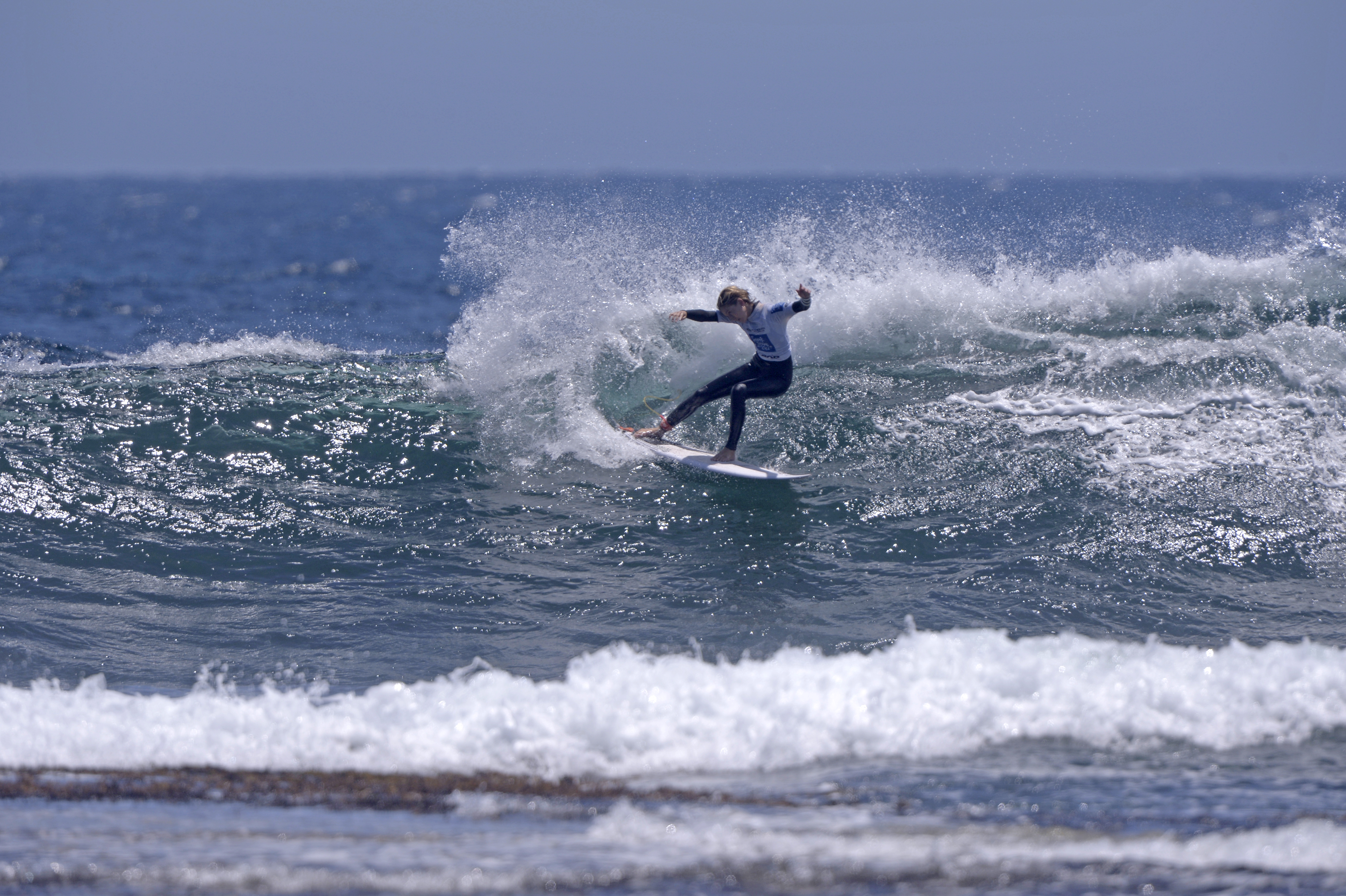 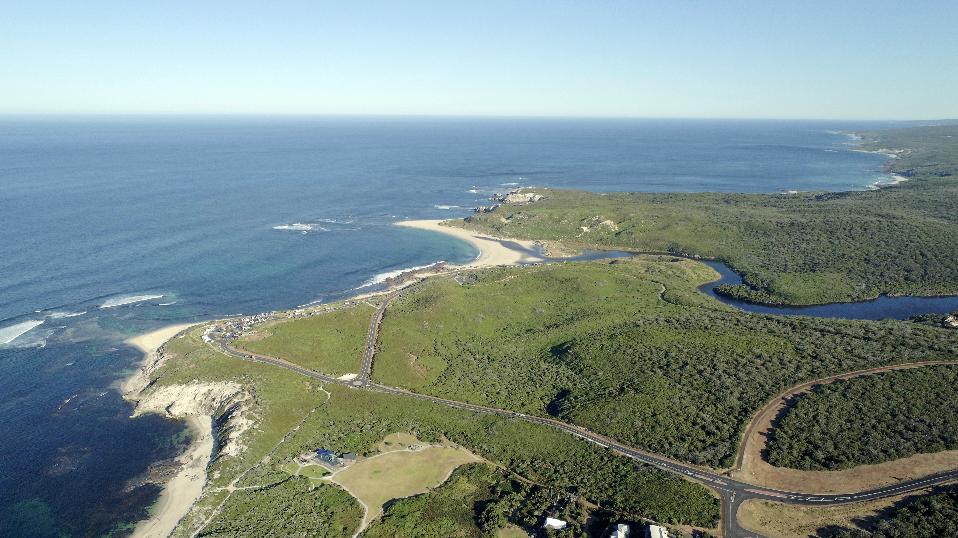