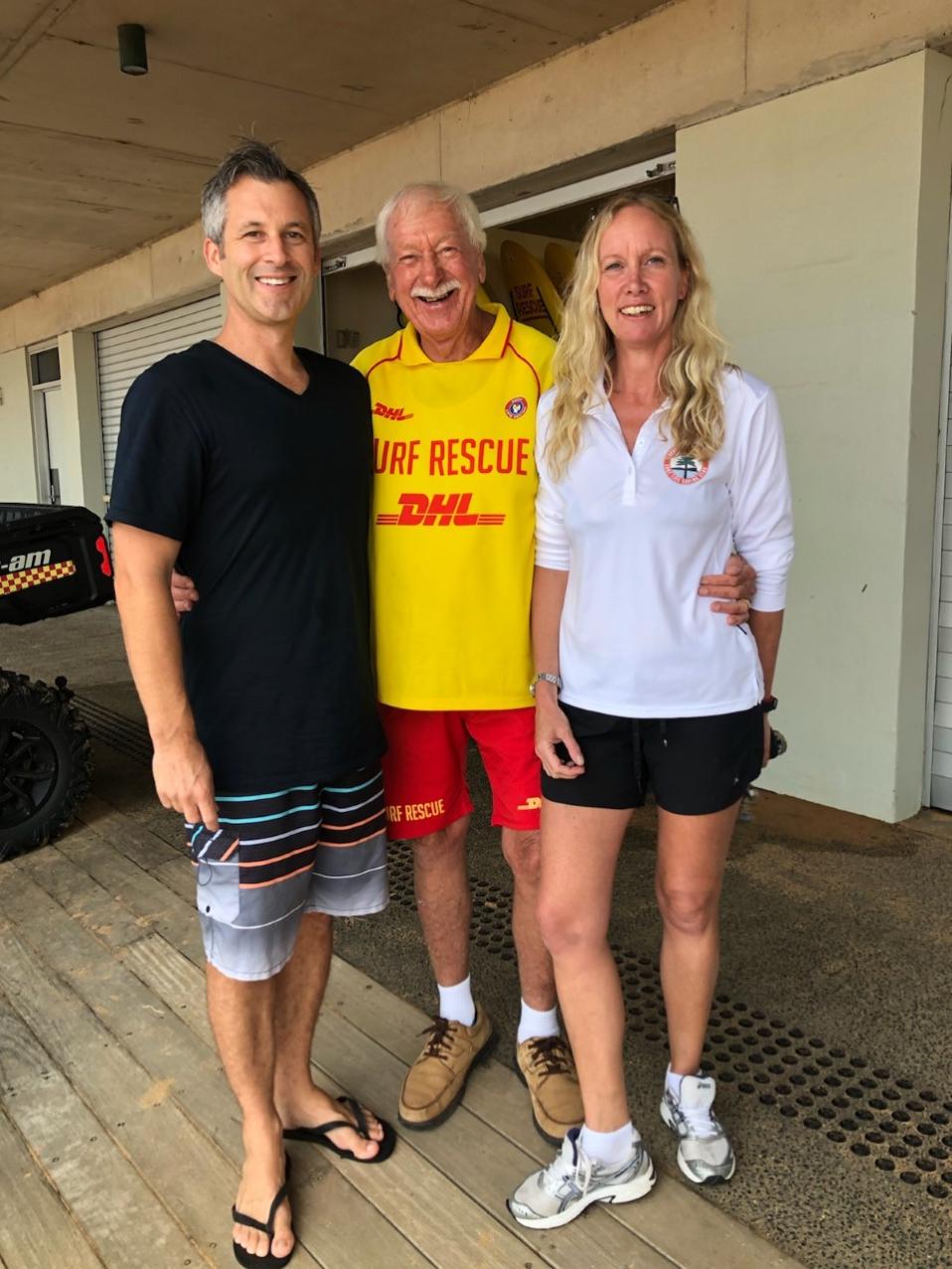 Cain Byrnes (not in patrol shirt yet as he is undergoing training to entitle him to wear one! Probationary) with ABSLSC Life Member Roger Sayers and Louise Billia, his trainer.
Cain Byrnes , a member of Avalon Beach SLSC who is one of our current bronze squad performed a successful resuscitation last week at a Futsal competition.

Cain, aged 38, praised the training he received during the recent training given by Avalon Beach SLSC training team.

While Cain was preparing for his game, a 57 year-old male collapsed on another court. Bystanders were calling for help. Cain immediately responded, moving to help the gentleman who was on his back, on the ground, unconscious.

"I took the head, airway, breathing and led the resus. I recruited a willing bystander, placed his hands over the sternum and told him to press down a third of the chest, showing him how deep and how fast. He did a great job with his compressions, timing and counting, while I delivered breaths checking for effective rise of the chest. After the first cycle we had a return of breathing, but it was erratic and shallow. His pulse was weak, and he soon went back into cardiac arrest." Cain explained.

"A few more cycles followed, during which time I recruited other teammates to do vital jobs: providing regular updates to the 000 operator, checking on ambulance, getting scissors to cut clothing for AED etc. The patient came back a second time; again short lived, cardiac arrest, CPR recommenced. We really needed that AED.

After approximately 8-10 minutes of continuous CPR the AED arrived. Whilst continuing CPR I talked another teammate through turning it on and getting pads ready for me to apply, which I did. Under the instruction of the AED I asked everyone to clear so an accurate uncontaminated analysis of the heart rhythm could be obtained. Soon after the AED said those words “stand clear, preparing shock”. Then “SHOCK PATIENT”. I cleared everyone and delivered the 1st defibrillation."

The AED instructed Cain and his co-helpers to recommence CPR. A quick assessment of the patient verified that he still wasn’t breathing, nor had a pulse. CPR was recommenced. Two minutes (or so) passed again when the AED did its thing. Once again it was time to “SHOCK PATIENT”. The second defibrillation was delivered, just before the rapid response paramedic arrived.

Thankfully, this time things were looking better, the patient was breathing.

"I assisted the paramedic to put on his monitoring equipment and oxygen and could see a heart rhythm on his monitor, although the patient was still unconscious. When the next ambulance arrived I handed the patient over to them, he was breathing and had a strong pulse." Mr. Byrnes said

The gentleman was taken to hospital and he is expected to make a full recovery.

The incident highlights the valuable work Avalon Beach SLSC's Bronze courses provide for the individual and the community and shows the importance of knowing what to do and the potential difference you can make. There is no doubt the outcome for the patient may have been very different if Cain hadn't had the recent training provided by our club.

Avalon Beach SLSC are running awareness courses to teach members of the public how to use the AED. Two one hour community awareness defib and CPR session will be held at the Avalon Beach Surf Life Saving Club  on the 13th of March at 11:00am or 7:00pm.  Book in via our website: avalonbeachslsc.com.au

These sessions are Free.

The courses offered by ABSLSC illustrate one of the many reasons Avalon Beach SLSC is National SLSA Club of the Year!!

Where the AED is in Woolies Avalon Beach