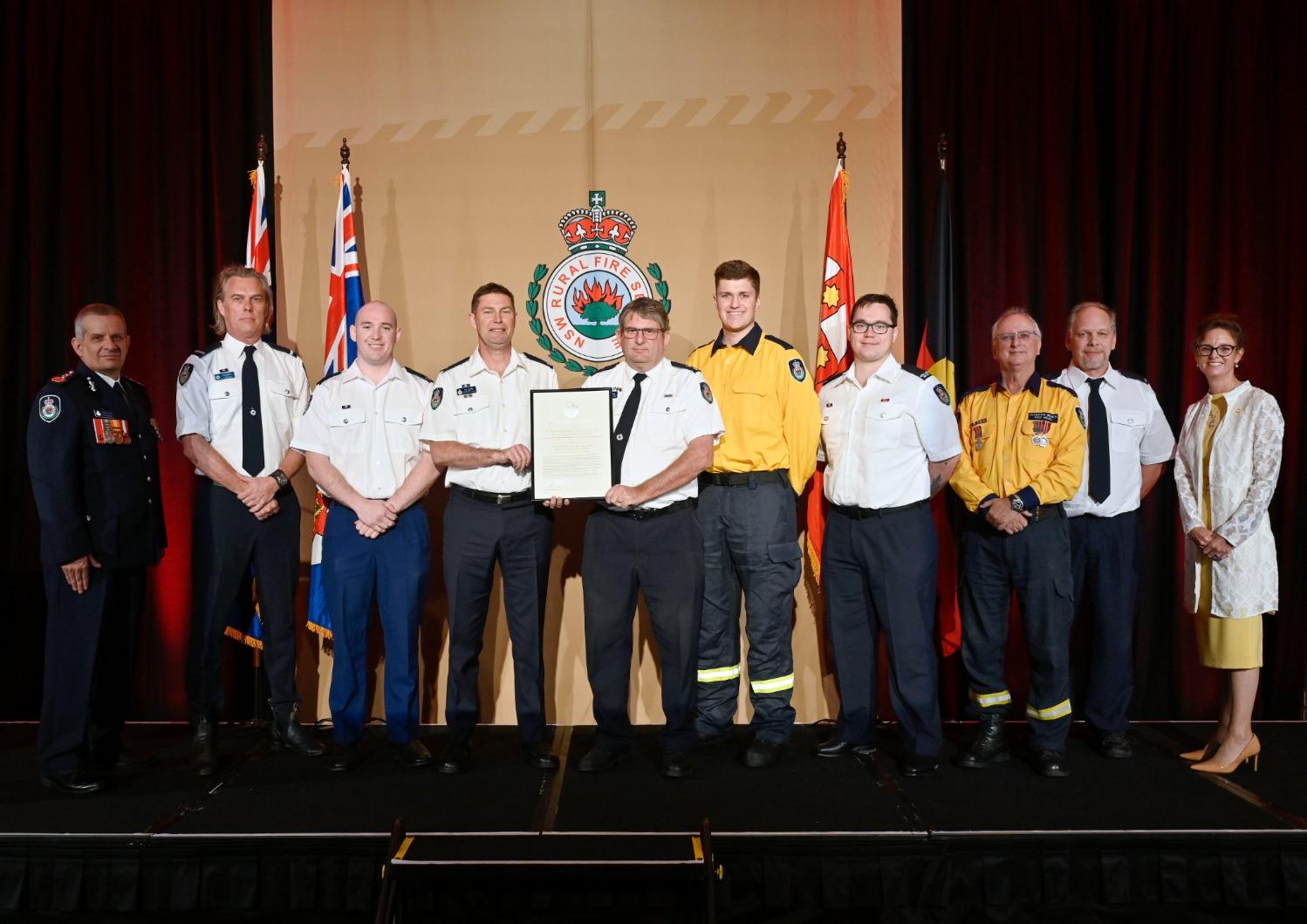 Nineteen NSW Rural Fire Service (NSW RFS) staff, volunteers and teams were honoured for their bravery and exceptional service on St Florian's Day 2022. Held on 4 May each year, the St Florian's Day awards coincides with the Feast Day of St Florian, Patron Saint of Firefighters, and International Firefighters' Day.

From pulling a man from a burning building to delivering hampers for COVID-stricken communities, 19 NSW Rural Fire Service (NSW RFS) staff, volunteers and teams have been honoured for their bravery and exceptional service.

NSW RFS Commissioner Rob Rogers was joined by Minister for Emergency Services and Resilience and Minister for Flood Recovery Steph Cooke to recognise the efforts of the NSW RFS members at the annual St Florian’s Day awards.

Commissioner Rogers praised the recipients for their ongoing hard work and professionalism.

“These past few years have seen the State face fires, floods and a global pandemic, and our NSW RFS members have selflessly stepped up to help communities through these challenges,” Commissioner Rogers said.

Minister Cooke thanked each award recipients for their dedication and commitment to serving and protecting communities across NSW.

“I am incredibly proud of our NSW RFS staff and volunteers who remain on call, day after day, responding to all manner of emergencies and incidents,” Ms Cooke said.

Firefighter Byrne, who is a member of the Baan Baa Brigade, was part of the team responding to a house fire in Baan Baa about 8.30pm on July 10th 2021. When he arrived at the home, Firefighter Byrne was informed that a person may be trapped by fire inside the building.

“The building was engulfed by fire as Firefighter Byrne forced entry into the house, where he found a man unresponsive on the floor,” Commissioner Rogers said.

“Bravely, he pulled the man from the home and performed first aid to help resuscitate him. Firefighter Byrne risked his life and put himself in harm’s way to try and save someone’s life.”

Sadly, the man passed away before NSW Ambulance paramedics arrived.

Firefighter Byrne’s fellow Baan Baa Brigade members received a Commissioner’s Certificate of Commendation (Unit) for their response to the house fire and for the comfort they provided to the man’s grieving son, who was on scene at the time of the fire.

“In what was a very distressing situation, these brigade members displayed great dignity and professionalism,” Commissioner Rogers said.

The Bourke Headquarters Brigade received the Commissioner’s Certificate of Commendation for going above and beyond to aid their community during a COVID-19 outbreak.

In August 2021, a hub for community assistance was set up at the Bourke Fire Control Centre with members of the Bourke Headquarters Brigade becoming key personnel to distribute care and food hampers across the region, including to Enngonia, Louth, Fords Bridge, Wanaaring and Byrock.

Commissioner Rogers said the volunteers worked 700 hours in morning and afternoon shifts by the end of the outbreak in October 2021.

“It is humbling to see the lengths our volunteers went to – including multiple 300 kilometre trips to Enngonia – to ensure remote communities affected by COVID-19 could still have these essential supplies,” Commissioner Rogers said.

“During this outbreak, these dedicated volunteers delivered 1,000 hampers and 250 fresh fruit and vegetable parcels to people. NSW RFS members are always there for their communities – in sickness and in health.”

The full list of recipients of the 2022 St Florian’s Day Awards is available here: www.rfs.nsw.gov.au/news-and-media/st-florians-day-2022

Among these are a Commissioner's Commendation for Northern Beaches Headquarters 1 and Belrose 1A, Strike Team E18-201.

Awarded to recognise service or outstanding actions in relation to fire service duties, administrative leadership, or exemplary performance of a specific project or task.

The Certificate of Commendation may be awarded to an individual or unit for service beyond the scope of responsibility normally expected of that person or unit in their assigned duties and is therefore worthy of acknowledgement and commendation.

On 13 February 2019, a Northern Beaches Strike Team was responded from Glenn Innes Fire Control to Tingha, near Inverell, to assist with property protection. A major fire was burning under Severe to Extreme conditions, impacting numerous properties.

Upon arrival, the Strike Team was reassigned to Guyra Road, via Gilgai. A Forestry Corporation employee flagged down the Strike Team Leader on Gilgai Road and asked that a crew be assigned to protect a house and sheds at the location. Headquarters 1, under the command of Deputy Captain Matthew Hunter, assessed the property and determined that it was safe to enter. At that time, a westerly wind was driving flames parallel to the property's side boundaries and away from the structures.

Immediately upon the crew entering the property, the wind changed from westerly to nor westerly and the fire behaviour escalated from two to three metre flames to 10-15, metres, with embers igniting long garden beds made of tyres at the front of the property.

Within minutes, the property was engulfed in thick black smoke and intense flames, with no means of escape. The Strike Team Leader, a crew member, the Forestry officer and owner of the premises were forced to withdraw to a burnt area opposite due to strong winds, embers, intense radiant heat and falling trees. Flames could be seen engulfing many car and truck bodies, sheds and probably the house.

Attempts were made to contact Headquarters 1, to no avail. A Red message was relayed to Fire Control reporting an overrun and requesting immediate assistance and air support. At that stage, it appeared from the road that the crew had probably been overrun, raising serious concerns about their survival.

Shortly after requesting assistance, Belrose 1A, under the command of Deputy Captain Keith Davies, radioed to say they were a few minutes away. Belrose 1A emerged from Gilgai Road, driving through smoke and flames and dodging falling trees as they made their way to the house, which was now totally involved in fire.

Having emptied their water tanks protecting elements of the property and initiating their overrun procedure, Headquarters 1 were attempting to leave through thick smoke and flames when Belrose 1A arrived, providing significant assistance. Both NSW RFS vehicles then exited the property to safety.

Northern Beaches Headquarters 1 and Belrose 1A, Strike Team E18-201 are worthy recipients of the Commissioner's Certificate of Commendation. 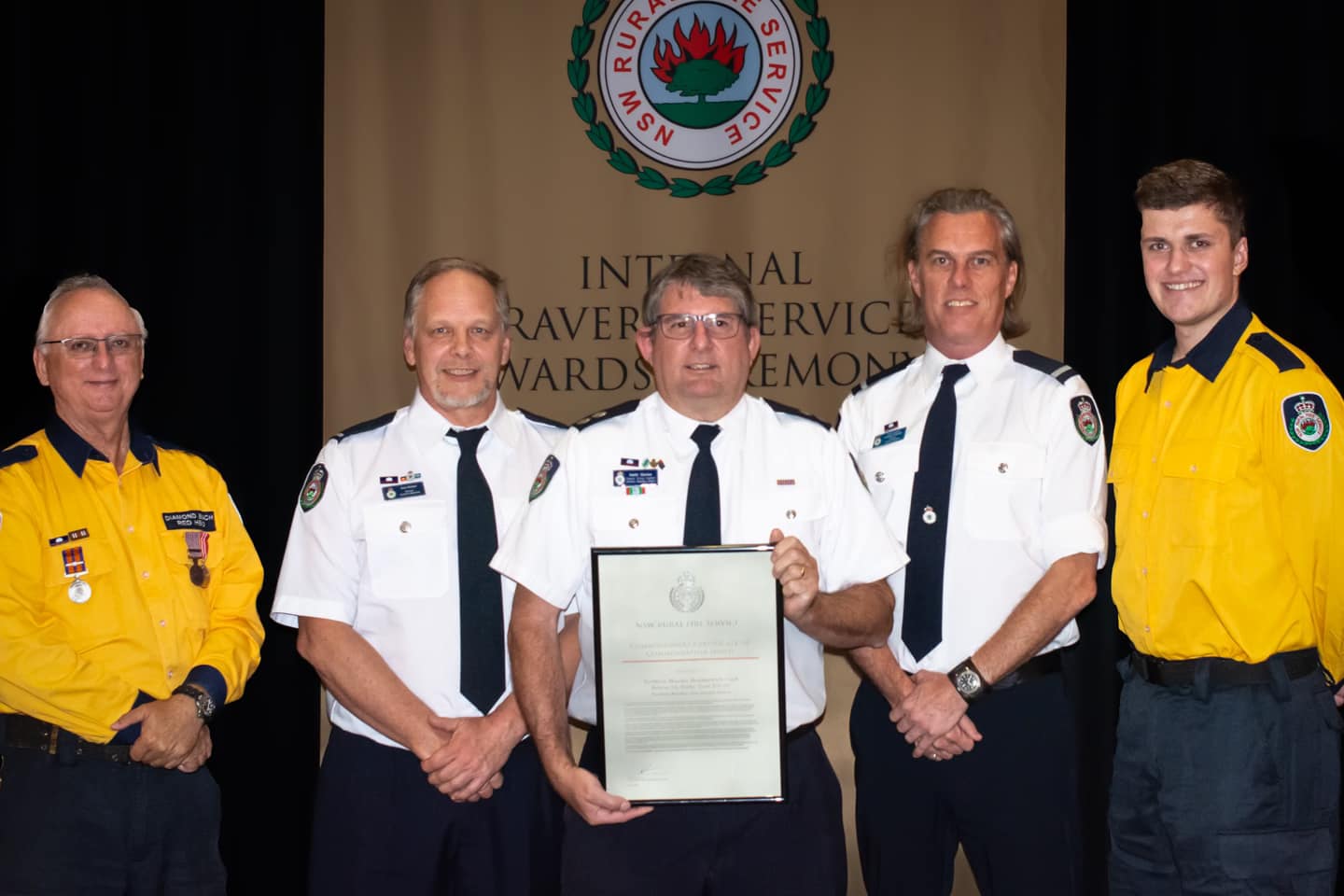