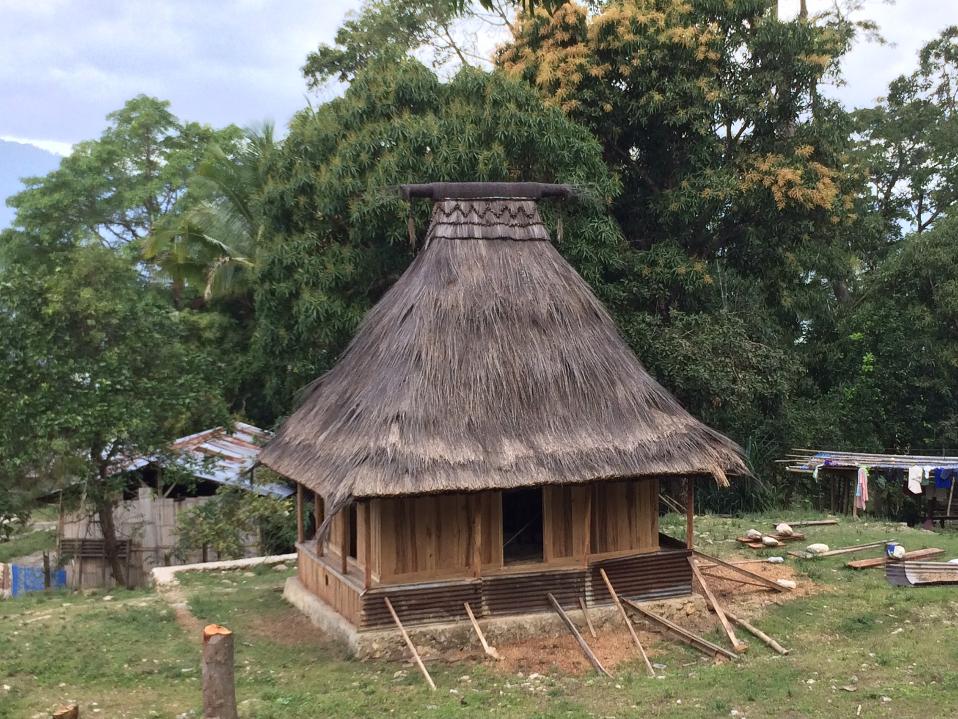 On our first morning in Soibada  we were woken by a cacophony of an animal orchestra. There was no sleeping in for us in this little village! The roosters started at about 3 am and were soon joined by the pigs, goats and a loan buffalo.  People were singing as they went about their morning chores, getting water from the streams and pumps, preparing a breakfast of rice for their families and working in their vegetable gardens. There is much work to be done in the cool early morning before the heat of the day descends.  The young men from the house just down the hill were already blasting Timorese pop music over a loud speaker as they worked on the construction of the traditional Uma Lulik  (Spirit House) in the adjacent clearing. They climbed the roof with agility laying the latch in a detailed pattern. The sunrise over the mountains was spectacular and the scenery outside our guesthouse a riot of pinks and greens.

We were given a heavy breakfast of rice, noodles and cassava. It would be enough to sustain us for the work ahead. Today we would begin the major project of this trip – the guttering and water tanks for the maternity clinic.

Several years ago a young plumber, Rory Halliday, visited Soibada with our team of volunteers. The local medical staff took him on an extensive tour of the clinic water supply – or lack of. The doctors beleaguered him with the problems the maternity clinic was experiencing. There was no running water.

The clinic is a relatively new government funded building and is topped with a clean looking corrugated iron roof. It would be perfect for collecting the abundant water of the rainy season. However there were no gutters, anywhere -  no buildings in the village had gutters. It seemed crazy with the amount of rainfall the mountains were subjected to in the wet that it wasn’t stored for the devastating dry season.

Rory and Dr Boaventura discussed the possibility of guttering and water tanks for the clinic. Timorese people do not seem to utilise water that comes from the sky. They prefer ground water that comes from springs, rivers and streams. In fact we had only recently assisted the Nuns in another part of Soibada to put in a bore near the convent in Salau for all the villagers to use.  The ingenious ladies had everyone in the village provide a small financial contribution towards its construction so that it became a joint effort between us all.

The medical staff were very open to the tank idea.  They were doing their best to encourage women to give birth at the clinic so they could prevent the maternal and child deaths that were still quite high. However  without water in the clinic every family had to provide their own buckets and the nurses and midwives had to go to the river or local spring was the sheets and towels.

Rory and his offsider Vaughan took the measurements. It has taken us several years to raise the money for this, one of our biggest jobs so far.  In a beautiful twist of fate it happened that it was Rory’s father Michael Halliday with us this time and he would assist Peter Randazzo in the installation. The guttering was shipped over by the Royal Australian Navy onboard HMAS Leeuwin and trucked up the mountain.

It wasn’t going to be an easy job but nothing was going to stand in their way. With the help of our drivers, translators and local high school students Peter and Michael made it happen. The roof wasn’t designed for guttering so special attachments needed to be made. Before the tanks could be put in place the platforms had to be readied. It was tough work. No challenge was too great! There was no ladder tall enough in the entire village but they didn’t let that stop them. Ajay, one of our volunteer translators dashed off into the jungle and reappeared with several huge pieces of bamboo. As the Australians looked on in awe he constructed a very sturdy ladder that should last us quite some years.

Several frustrating yet exhilarating days later it was done! After all these years, the challenges of funding and logistics Peter and Michael had succeeded. I think we were all in shock! The tanks won’t be full until later in the year when the rains come but they needed to be tested out now while we were still there. Every bucket, jerrycan and receptacle was gathered and anyone that could be roped into helping carried water from the nearby spring to put in the tanks. It worked!

It is perhaps one of the greatest feelings to be able to follow through on a request from our friends in Soibada. Something like this will change lives for so many people. As volunteers it is a privilege to be involved in a project like this – it puts our lives here on the Northern Beaches into perspective. For me personally though I am just so lucky to keep meeting these amazing Australians willing to give of their time and skills to support these projects in Soibada. Peter Randazzo, Michael Halliday and all your helpers, I thank you and appreciate you making dreams come true. 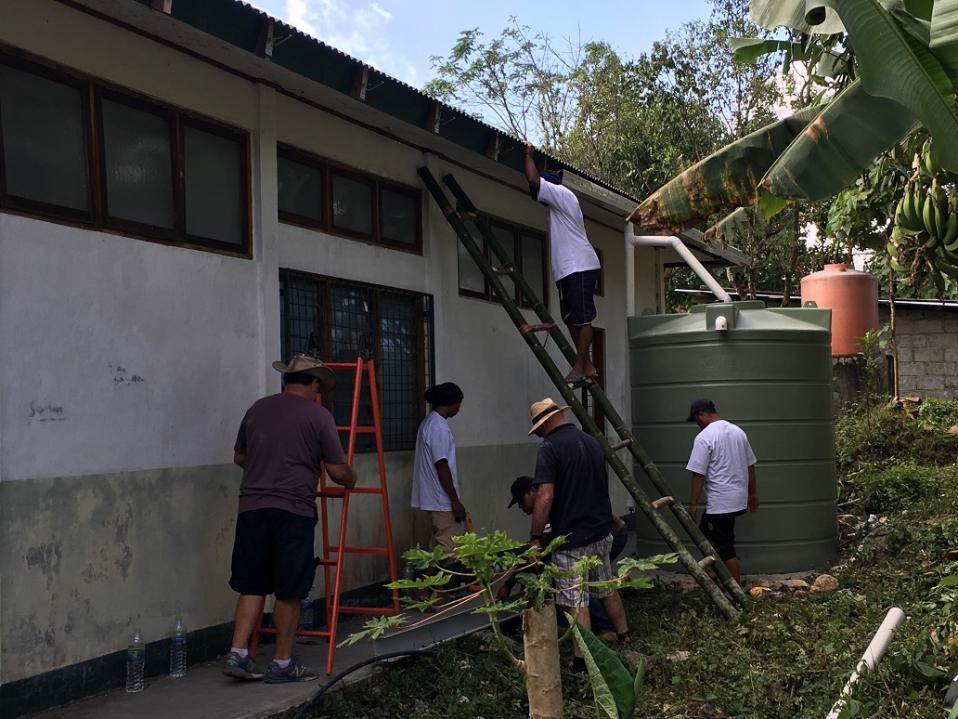 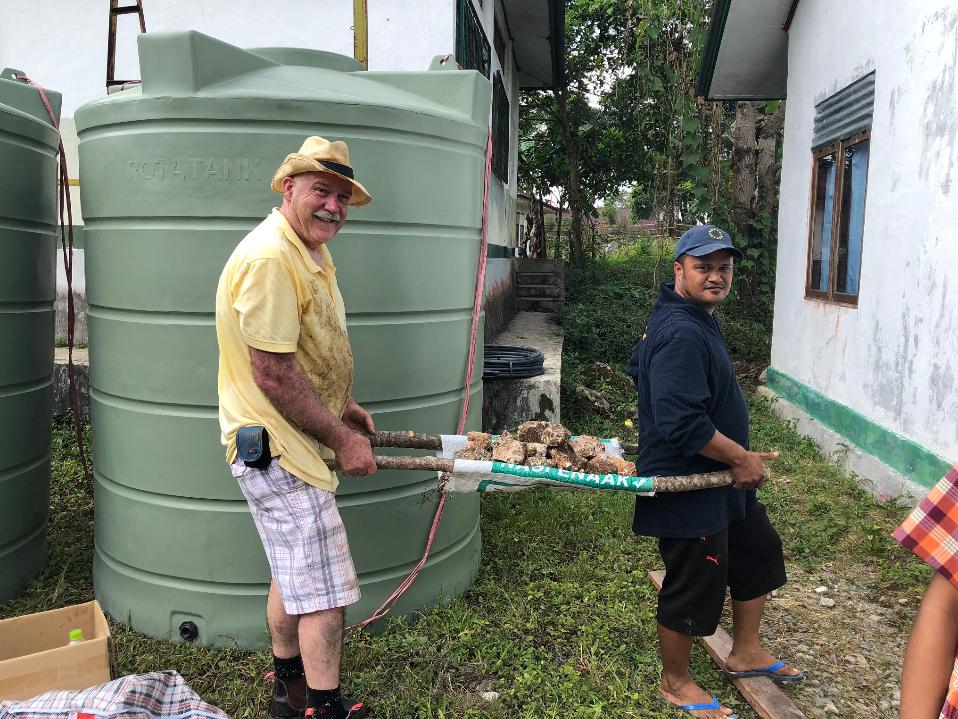