Cute little wrigglers have been turning up in odd places and getting themselves into tricky predicaments in the last few weeks.

January to March is when many little local snakes are born or hatched and they scarper off in different directions trying not to get eaten by kookaburras, magpies and other predators.

Human babies have a mum and dad to teach them about the world and the types of places they should avoid. Snake babies, however, are born independent and there is no parental involvement. But sometimes I think they could benefit from some some advice from mum and dad snake...

They certainly seem to have a knack for finding trouble! Most commonly: they fall into pools, they choose to curl up in stinky shoes, they find sticky traps and get horribly stuck, they forget to stay hidden and get pounced on by domestic pets and they often shimmy under doors and find themselves in offices, shops and homes by mistake!

We used olive oil to gently dissolve the adhesive and she was freed fairly quickly. We bathed her in warm water and gave her fluids before releasing her.

This baby whip snake slithered into the open and was grabbed by a cat. She had to have a warm Betadine bath and a course of antibiotic injections to counteract the toxins present in a cat’s mouth. 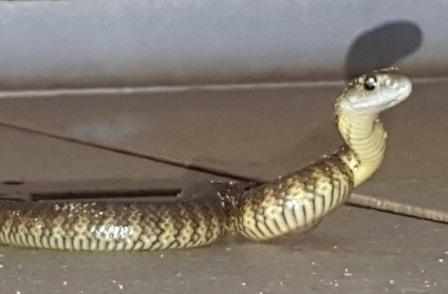 This little baby tiger snake was chasing a lizard and found himself in someone’s bathroom by mistake. He was relocated to nearby bushland.

This baby red-bellied black snake fell into a tank of contaminated water and ended up with giardiasis. She felt too sick to eat so we had to force-feed her until the flagellate-combating medication kicked in.

As mentioned before, they can either hatch from an egg or be live-born, depending on the species.

Egg-layers will deposit their eggs in a suitable site (usually in soil and only shallow as they obviously can’t dig). The eggs are left to incubate and hatch on their own. The exception being pythons. Female pythons will stay with and brood their pile of eggs (which adhere to each other in a mound) and will even use a warming technique called ‘shivering thermogenesis’ to warm her eggs. She uses rapid muscle twitching to raise her own body temperature as she coils protectively around her egg-mound.

This photo shows diamond pythons hatching from their mound of eggs: 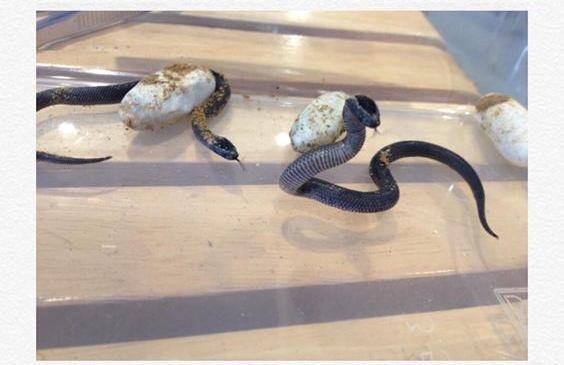 Golden-crowned snakes hatching from eggs that were rescued from a construction site.

“I have seen a snake in my backyard. Will there be a nest of snakes nearby?” Australian snakes are generally loners and only interact during breeding season. You won’t find nests of snakes together in our area.

“I found a baby snake. Will Mum and Dad snake be close-by?” As mentioned above, the babies are born independent and there is no parental involvement.

“I want to go bush-walking but am afraid of snakes. Will they hide under a bush and bite my feet as I walk past?” Snakes are fearful of humans and avoid interactions with us. They will tend to stay hidden or move off as a human approaches. They will only react if they are under threat from a human and will then defend themselves.

“I don’t like snakes because they are slimy”. Snake-skin is very dry. Their scales may look shiny in the sun but they are not slimy at all.

Neonate or young snakes can look quite different to how they will eventually turn out. These photos show young eastern brown snakes (Pseudonaja textilis) - one has quite obvious banding and the other has a black head. This colouration fades with growth. 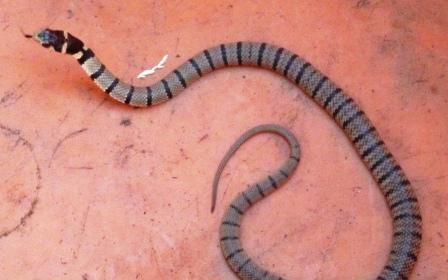 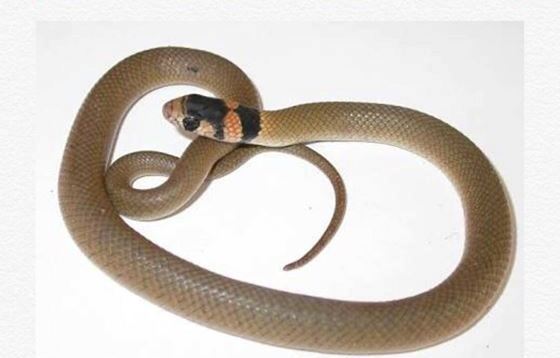 What to do if you find a young snake:

Snakes are a very important part of our environment and the food chain. They are protected under the Wildlife Act 1972 and it is illegal to harm a snake. An offence carries hefty fines and even jail-time.

Be kind to snakes - they really are amazing animals