Building off a ground-breaking 2017 expedition, a follow-up expedition in the Phoenix Islands Archipelago enabled the largest collection of microbial cultures from the central Pacific Ocean and the most comprehensive study of deep sea coral and sponge ecosystems in this part of the world.

“It has been very inspiring to help document the biodiversity of unexplored seamounts on the high seas and in U.S. waters,” said the expedition Chief Scientist Dr. Randi Rotjan of Boston University. “We’re at the beginning of the UN Decade of Ocean Science for Sustainable Development, so now is the time to think about conservation broadly across all oceanscapes, and the maps, footage, and data we have collected will hopefully help to inform policy and management in decision making around new high seas protected areas.”

During the expedition, scientists made two rare sightings of a glass octopus, a nearly transparent species whose only visible features are its optic nerve, eyeballs and digestive tract. Before this expedition, there has been limited live footage of the glass octopus, forcing scientists to learn about the animal by studying specimens found in the gut contents of predators. 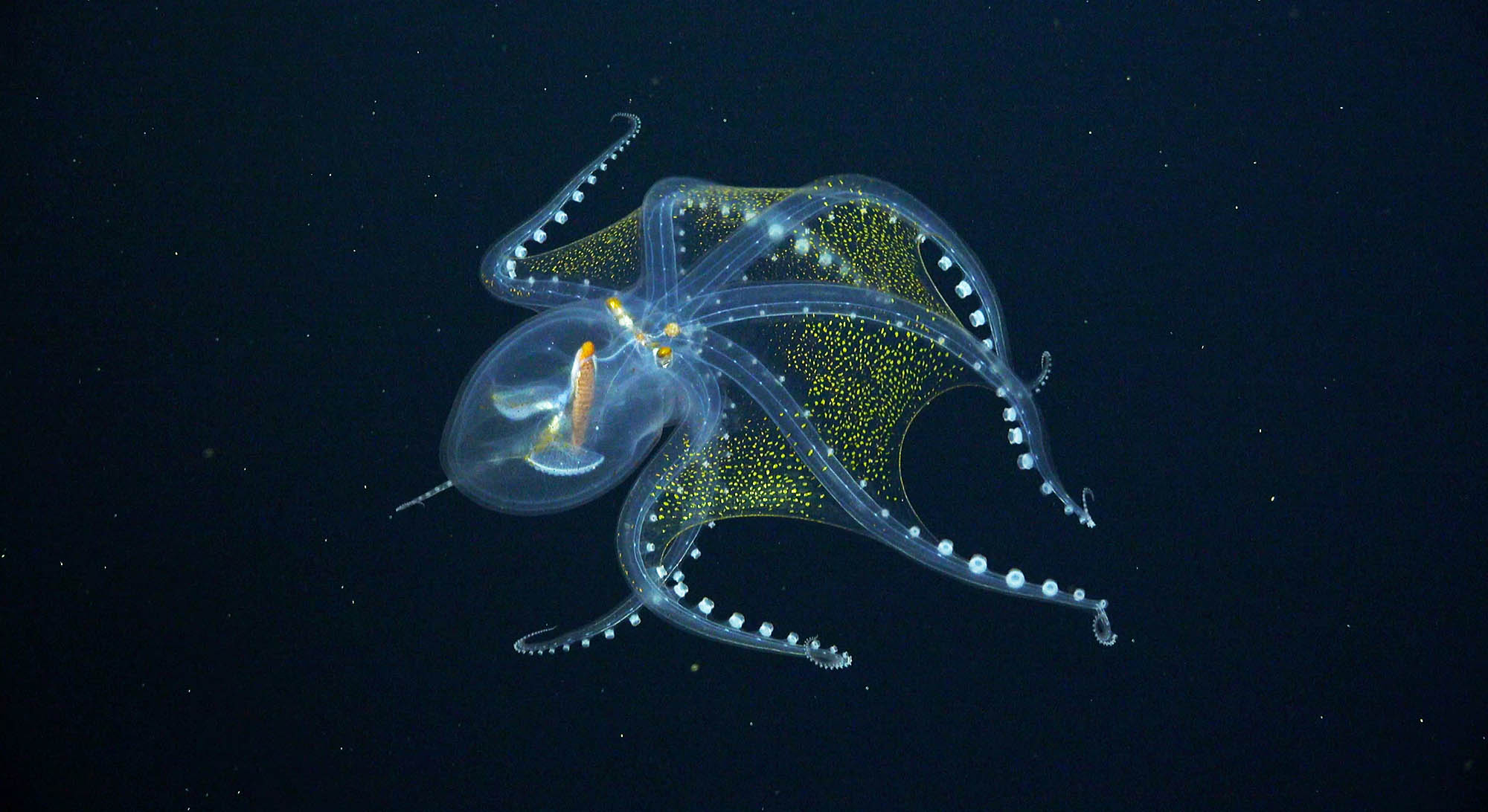 A Vitreledonella or Glass Octopus

Schmidt Ocean Institute’s underwater robot SuBastian also captured footage for the first time of a rare whale shark, a deep-water species that dates back millions of years and whose name comes from its length of more than 40 feet. During the expedition, scientists also noted unique marine behaviours, including crab stealing fish from one another.

Of the 21 expedition dives, totalling more than 182 hours of exploration on the seafloor with SuBastian, seven were completed in the U.S. Pacific Remote Islands Marine National Monument (PRIMNM) and offered new insights into the no-take marine protected area, which includes the U.S. exclusive economic zone (EEZ) around the Howland and Baker islands. In 2017, Falkor travelled to the Phoenix Islands Protected Area (PIPA) with some of the same scientists. The recently concluded expedition continued the 2017 work in the U.S. portions of the Phoenix Islands Archipelago, offering a more complete picture of the region’s entire ecosystem and how the seamount habitats are connected. 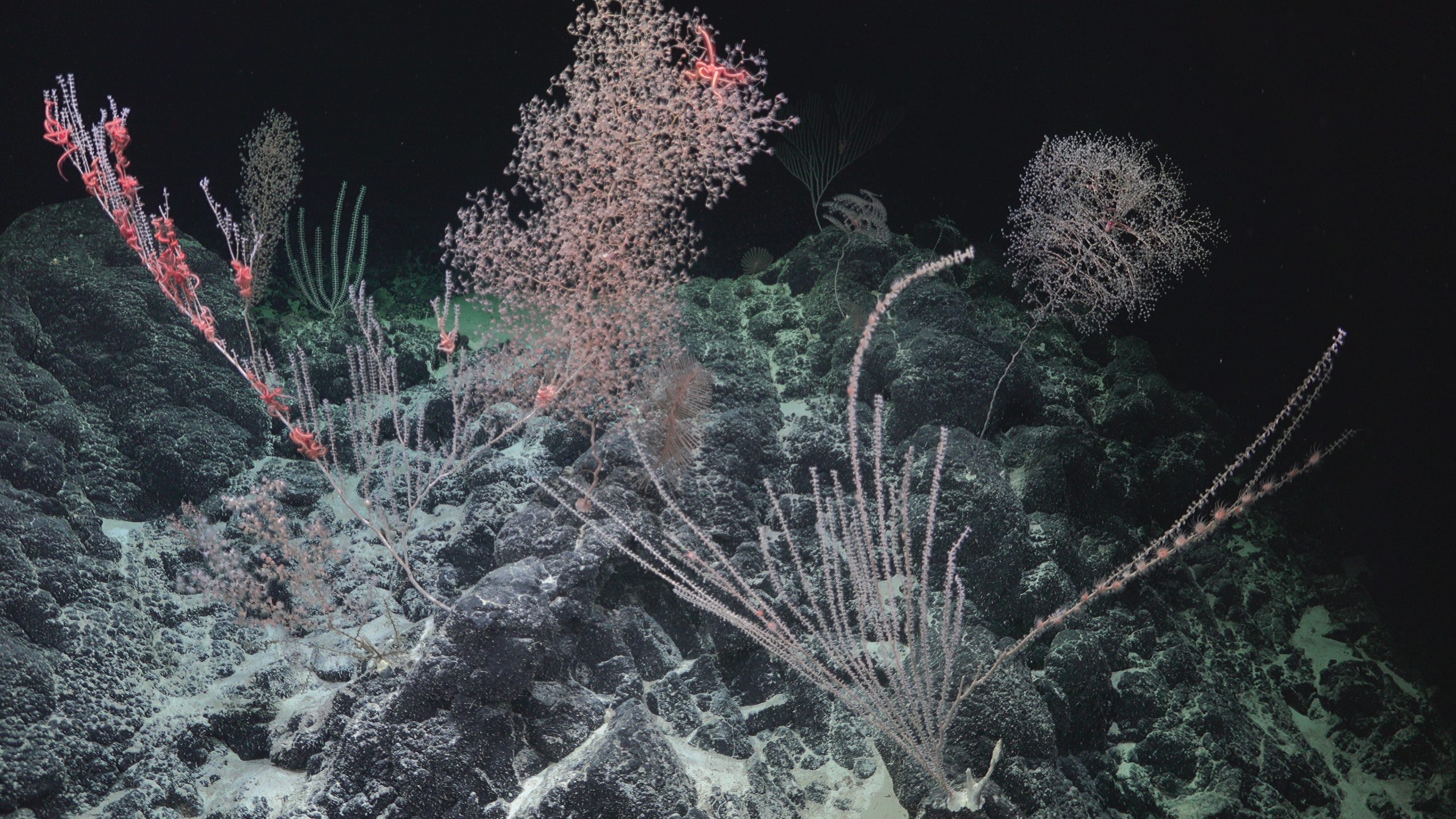 Diverse deep-sea coral communities observed on a seamount to the north of the Howland and Baker unit of the Pacific Remote Islands Marine National Monument (PRIMNM). These communities of are interest for further biodiversity exploration using all of our analytical methods on this expedition. SOI / ROV SuBastian

The science team completed the first comprehensive survey of coral and sponge predation in the world, to investigate how corals respond to grazing scars and wounding. The team conducted a series of novel experiments onboard the ship to determine how corals and sponge immune systems react to over 15 different microbial stimuli. Through this work, the team generated the largest deep-water microbial culture collection from the Central Pacific ocean. 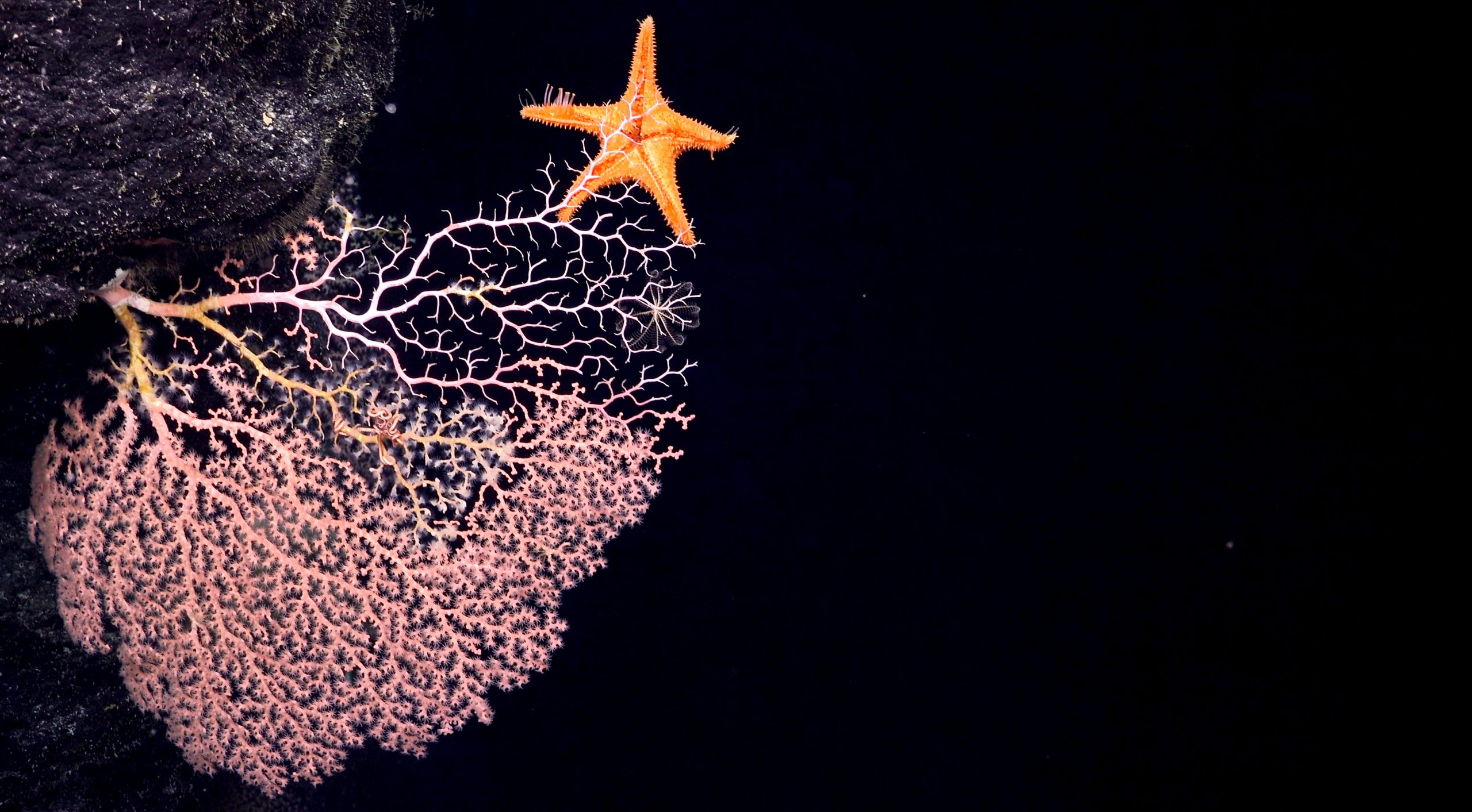 Findings from these experiments will help to define the origins of adaptive immunity in multicellular animals, which may provide new insights and technologies that can help propel modern medical research in cancer immunotherapies, drug delivery and improved vaccine efficacy.

“The Ocean holds wonders and promises we haven’t even imagined, much less discovered,” said Wendy Schmidt, co-founder of Schmidt Ocean Institute. “Expeditions like these teach us why we need to increase our efforts to restore and better understand marine ecosystems everywhere–because the great chain of life that begins in the ocean is critical for human health and wellbeing.” 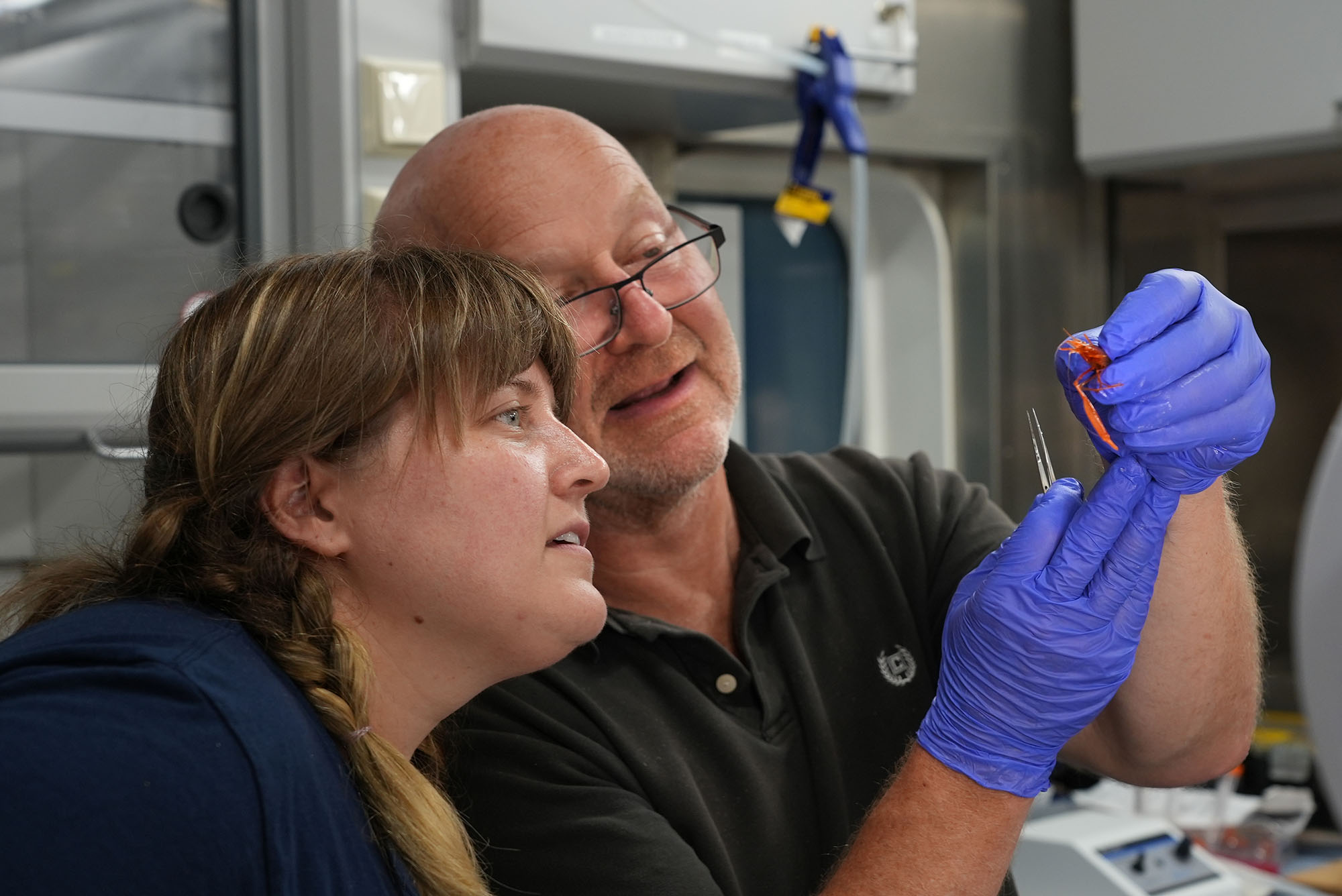 (L-R) Alexis Weinnig (a research scientist with the US Geological Survey) and Tim Shank (deep-sea biologist with the Woods Hole Oceanographic Institution) examine a deep-sea shrimp collected during a recent dive of the Remotely Operated Vehicle (ROV) SuBastian.Erik Olsen / SOI

“The coverage of this expedition was remarkable–we found changes in species across depth and geography around the Pacific equator and in the suite of organisms living on corals,” said Dr. Tim Shank, biologist at the Woods HoIe Oceanographic Institution. “Looking into these deep-sea communities has altered the way we think about how organisms live and interact on seamounts and how they maintain diversity of life in the deep ocean.”

“Working with scientists and local researchers, this expedition is a remarkable example of the frontiers of science and exploration that we are able to support,” said Dr. Jyotika Virmani, executive director of Schmidt Ocean Institute. “Live-streaming the dives gives us a glimpse of rarely seen and fascinating creatures such as the transparent glass octopus. By providing this platform to further the understanding of our ocean, we trigger the imagination while helping to push forward scientific insights and the protection of our underwater world.”

The Phoenix Islands, or Rawaki, are a group of eight atolls and two submerged coral reefs that lie east of the Gilbert Islands and west of the Line Islands in the central Pacific Ocean, north of Samoa, and just over 5000 kilometres northeast of Sydney. They are part of the Republic of Kiribati.

The Schmidt Ocean Institute was established in 2009 by Eric and Wendy Schmidt to advance oceanographic research through the development of innovative technologies, open sharing of information, and broad communication about ocean health. It operates Falkor, a philanthropic research vessel that is made available to the international science community at no cost. For more information, visit www.schmidtocean.org.

Founded in 1839, Boston University is an internationally recognised institution of higher education and research. With more than 34,000 students, it is the fourth-largest independent university in the United States. BU consists of 17 schools and colleges, along with the Faculty of Computing & Data Sciences and a number of multi-disciplinary centres and institutes integral to the University’s research and teaching mission. In 2012, BU joined the Association of American Universities (AAU), a consortium of 65 leading research universities in the United States and Canada.

The Woods Hole Oceanographic Institution (WHOI) is a private, non-profit organisation on Cape Cod, Massachusetts, dedicated to marine research, engineering, and higher education. WHOI is known for its multidisciplinary approach, superior ship operations, and unparalleled deep-sea robotics capabilities. They play a leading role in ocean observation and operate the most extensive suite of data-gathering platforms in the world. Top scientists, engineers, and students collaborate on more than 800 concurrent projects worldwide—both above and below the waves—pushing the boundaries of knowledge and possibility. For more information, please visit www.whoi.edu