Seagull Pair At Turimetta Beach: Spring Is In The Air!

This wonderful Video sent in by Joe Mills, our Reserves and Parks photographer, caught these two seagulls at the southern end of Turimetta Beach.
Joe says; ''They are a couple and are constant companions down this end of the beach.  Very friendly and are happy to search for food in rock pools and on the high water mark in the sand while I am sitting on a rock nearby (only a couple of metres). The gull that is flying from behind the rock has just caught a small fish and presents it to their companion.''
NB: Joe has slowed the video down so you can see the details.
Thanks Joe - wonderful capture.
Gulls, or colloquially seagulls, are seabirds of the family Laridae in the suborder Lari. They are most closely related to the terns and skimmers and only distantly related to auks, and even more distantly to waders. Until the 21st century, most gulls were placed in the genus Larus, but that arrangement is now considered polyphyletic, leading to the resurrection of several genera. An older name for gulls is mews, which is cognate with German Möwe, Danish måge, Swedish mås, Dutch meeuw, Norwegian måke/måse and French mouette, and can still be found in certain regional dialects.
Gulls are typically medium to large birds, usually grey or white, often with black markings on the head or wings. They typically have harsh wailing or squawking calls; stout, longish bills; and webbed feet. Most gulls are ground-nesting carnivores which take live food or scavenge opportunistically, particularly the Larus species. Live food often includes crustaceans, molluscs, fish and small birds. Gulls have unhinging jaws which allow them to consume large prey. Gulls are typically coastal or inland species, rarely venturing far out to sea, except for the kittiwakes. The large species take up to four years to attain full adult plumage, but two years is typical for small gulls. Large white-headed gulls are typically long-lived birds, with a maximum age of 49 years recorded for the herring gull. 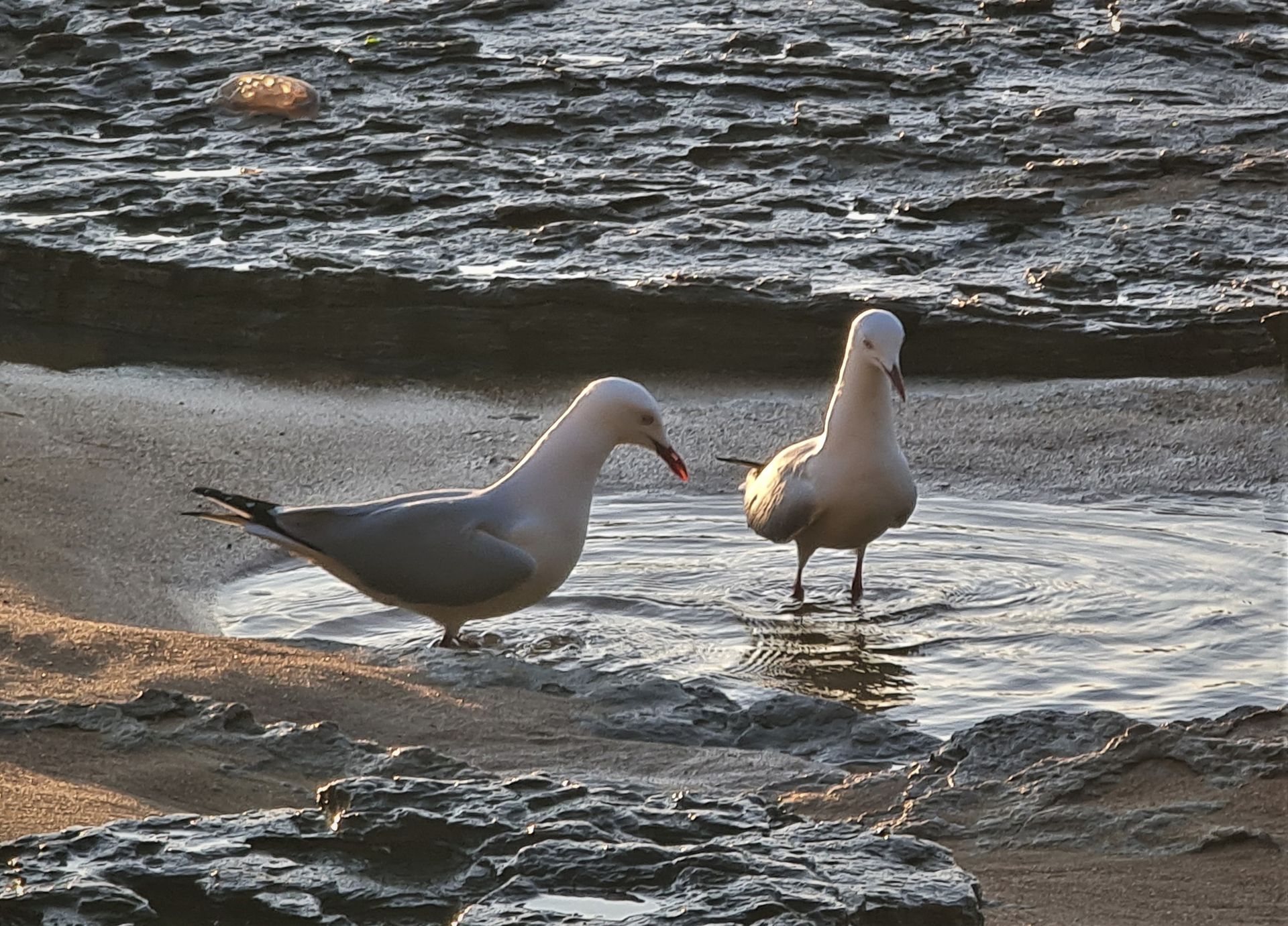 Charadriiform birds drink salt water, as well as fresh water, as they possess exocrine glands located in supraorbital grooves of the skull by which salt can be excreted through the nostrils to assist the kidneys in maintaining electrolyte balance. Gulls are highly adaptable feeders that opportunistically take a wide range of prey. The food taken by gulls includes fish and marine and freshwater invertebrates, both alive and already dead, terrestrial arthropods and invertebrates such as insects and earthworms, rodents, eggs, carrion, offal, reptiles, amphibians, plant items such as seeds and fruit, human refuse and chips. No gull species is a single-prey specialist, and no gull species forages using only a single method. The type of food depends on circumstances, and terrestrial prey such as seeds, fruit, and earthworms are more common during the breeding season while marine prey is more common in the nonbreeding season when birds spend more time on large bodies of water.
Gulls are monogamous and colonial breeders that display mate fidelity that usually lasts for the life of the pair.
Gulls also display high levels of site fidelity, returning to the same colony after breeding there once and even usually breeding in the same location within that colony. 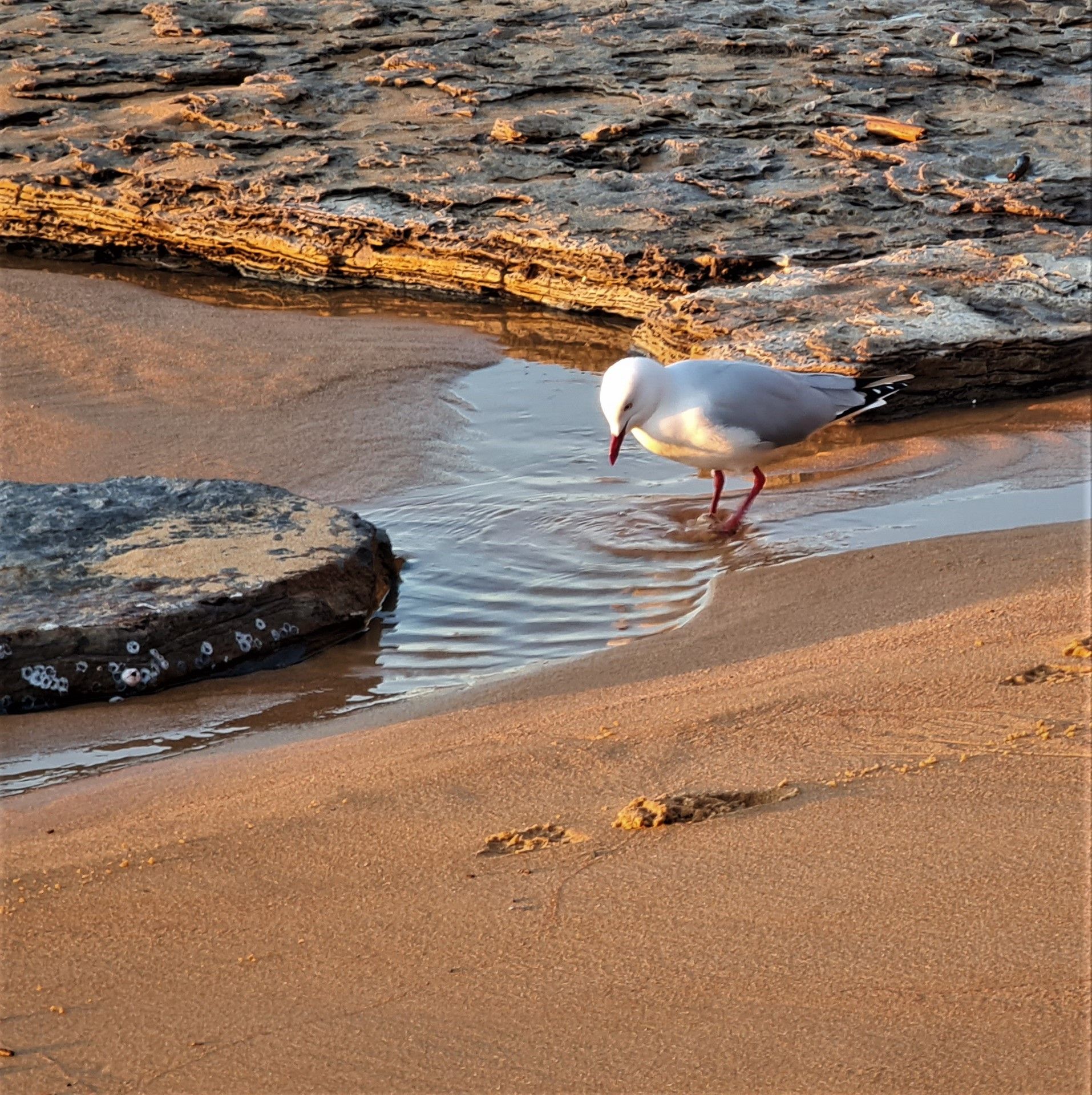 Silver Gulls (Seagulls) can breed continuously between March and November, laying between 2-4 eggs. Incubation lasts between 22 and 26 days, and begins after laying the first egg, although it is discontinuous until the second egg is laid. This means the first two chicks are born close together, and the third chick some time later. Young chicks are brooded by their parents for about one or two weeks, and often at least one parent remains with them, until they fledge, to guard them. Both parents feed the chicks, although early on in the rearing period, the male does most of the feeding and the female most of the brooding and guarding.
Nest building is also part of the pair-bonding. Gull nests are usually mats of herbaceous matter with a central nest cup. Nests are usually built on the ground, but a few species build nests on cliffs.
All native birds, reptiles, amphibians and mammals are protected in New South Wales by the Biodiversity Conservation Act 2016 (BC Act). 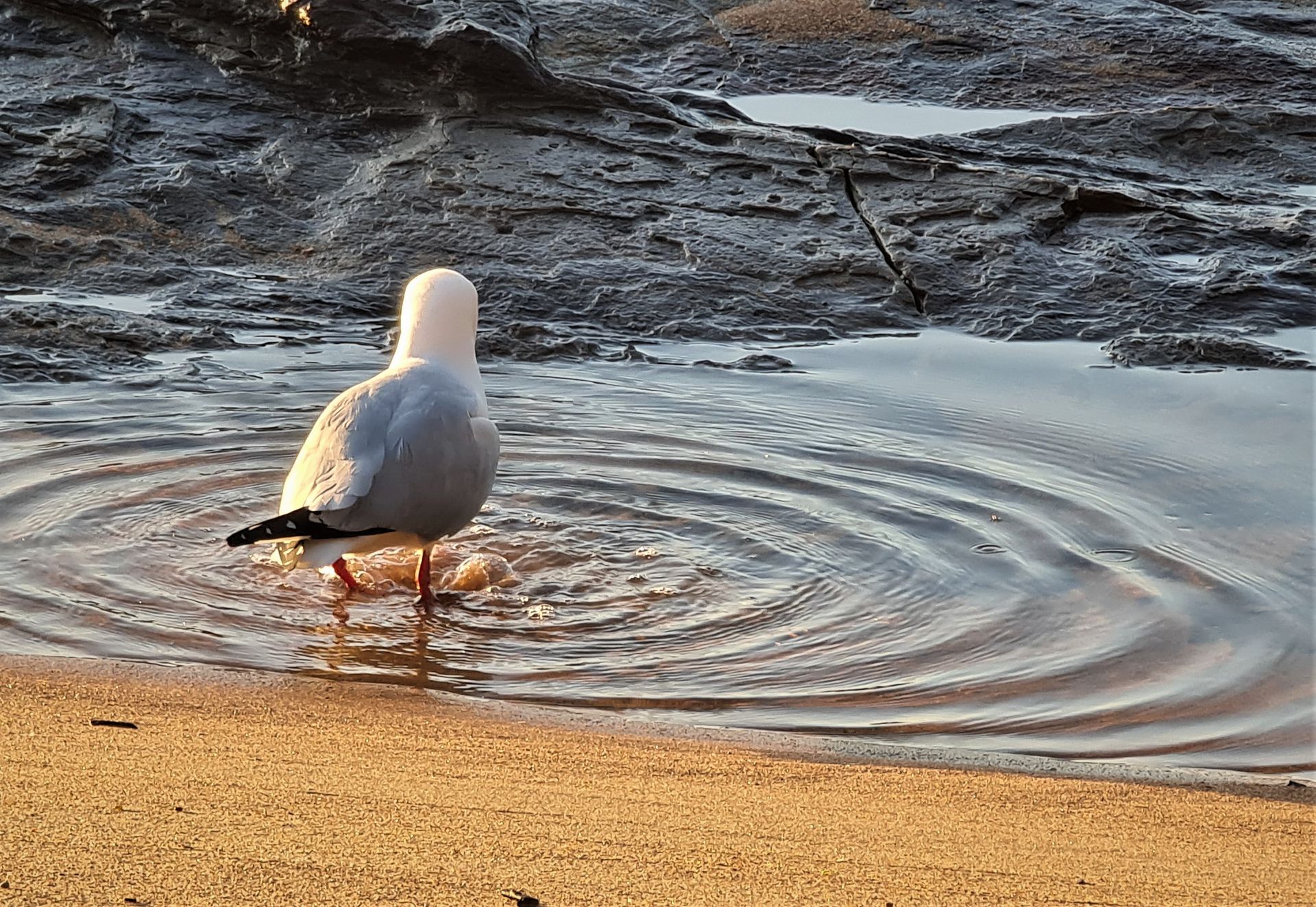 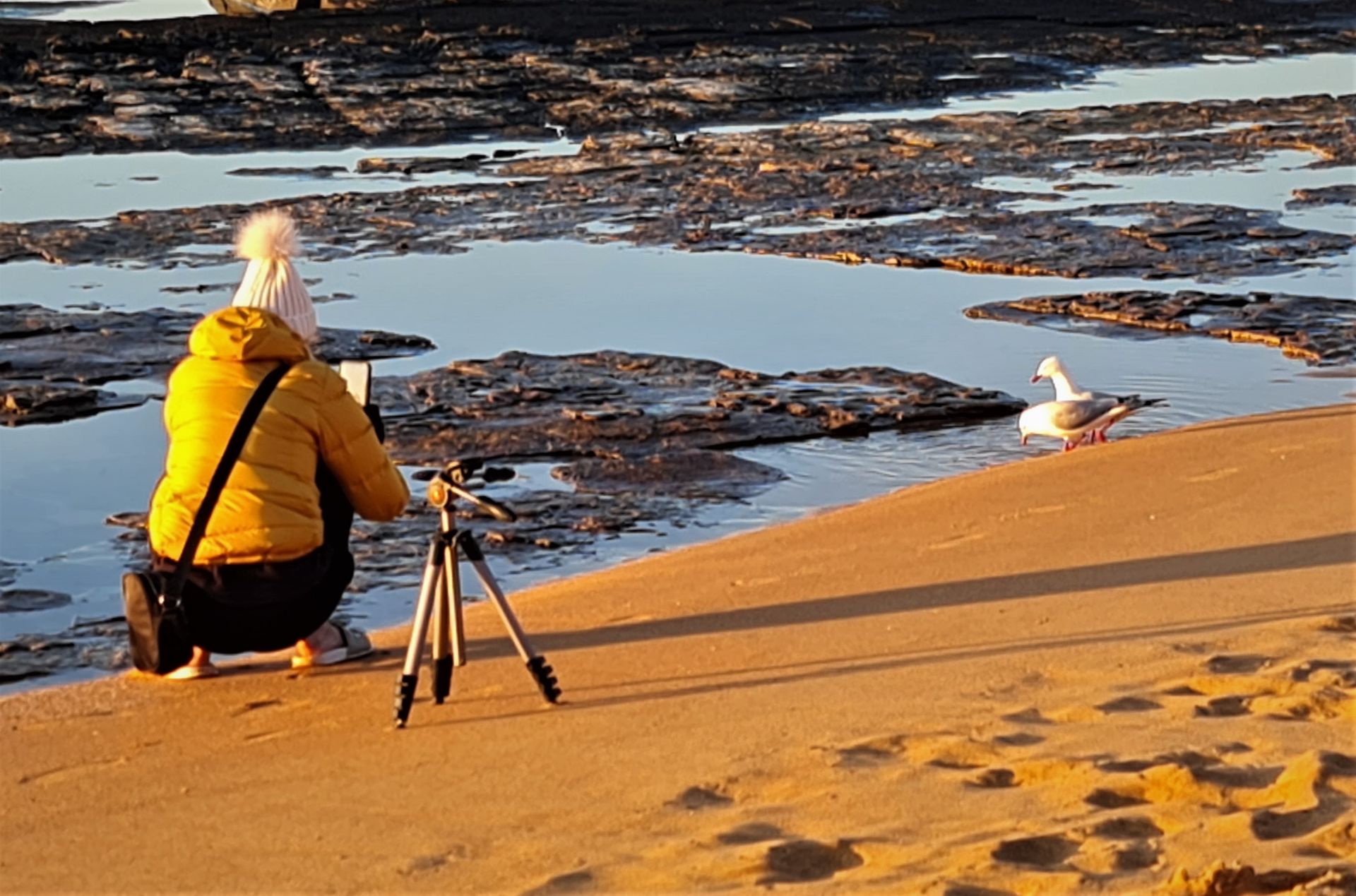 Residents are reporting local pairs of magpies are already starting to display signs of breeding in well-known local places they nest. The NSW Department of Environment provides a few tips to help us look after ourselves and these other local residents during the onset of the Spring breeding season.
As Spring arrives, many species of native birds are beginning to court and build nests. Across Sydney these species include the magpie, butcherbirds and noisy miners, along with all the shorebirds we are fortunate to share this beautiful place with.
As Spring progresses some birds start protecting their hatchlings by swooping people entering their nesting territory.
The breeding season generally runs from late August through until November. It can be a stressful time for many people as favourite outdoor destinations become ‘no-go zones’ due to swooping birds. But the National Parks and Wildlife Service (NPWS) says there are simple steps people can take to avoid these unwanted close encounters of the feathery kind during spring.
“For most of the year these birds are welcome additions to our lives helping control garden pests and filling our ears with their beautiful song,” NPWS  Executive Officer of the Sydney Branch of OEH Peter Hay said.
“However, for several weeks in springtime, some of the males will swoop to defend their hatchlings, generally within 100 metres of their nest.
“They are just being responsible parents, protecting their young from perceived threats by warning us off.”
Some simple and effective steps to avoid being swooped include:
“We advise people to try to avoid areas where birds are known to swoop and to be patient and as tolerant as possible.
“These are protected native birds and harassing them may likely make the problem worse as they become more distrusting of people,” Mr Hay added. 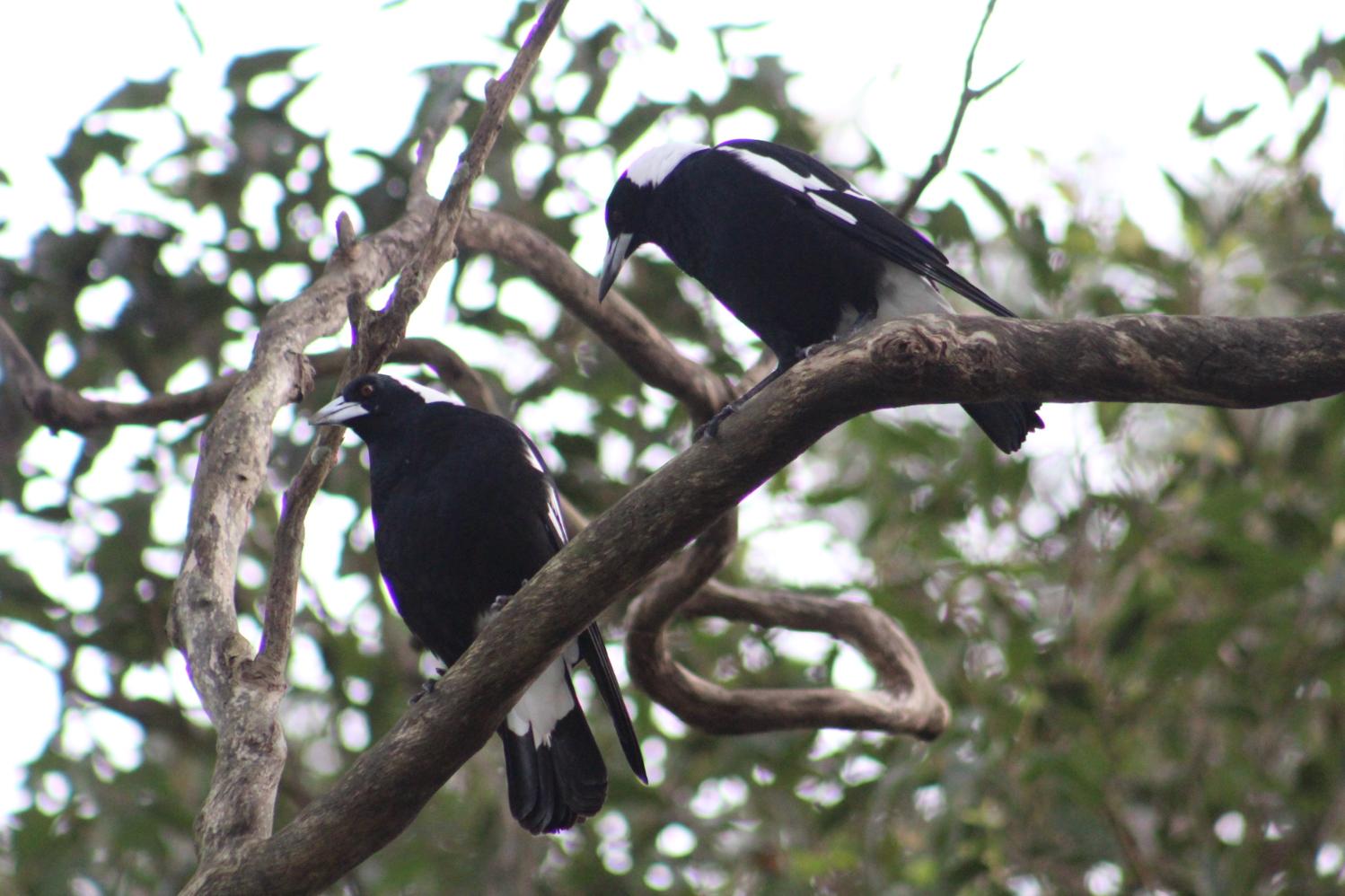