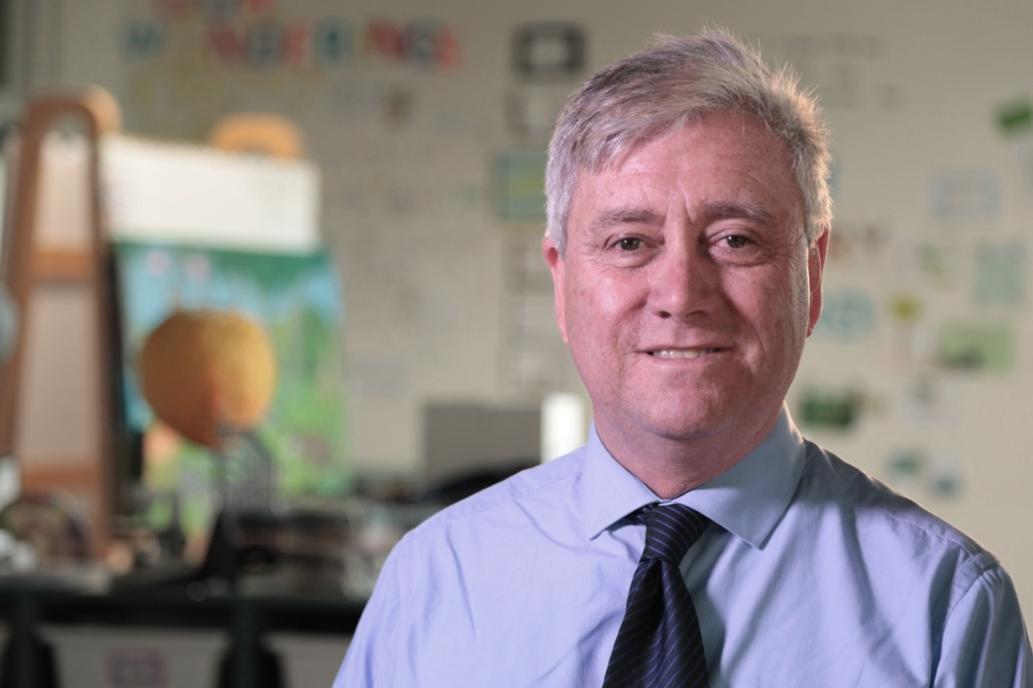 Gary Tilley is mentoring the next generation of science and maths teachers to improve the way these subjects are taught in the classroom.

“In over 30 years of teaching, I’ve never seen a primary school student who isn’t curious and doesn’t want to be engaged in science. Once they’re switched onto science, it helps their literacy and numeracy skills, and their investigative skills. Science is the key to the whole thing,” Gary says.

Gary recognised a long time ago that the way science was taught in primary schools needed to change. So he has taken it upon himself to mentor the younger teachers at his school, and helps train science and maths student teachers at Macquarie University through their Opening Real Science program. 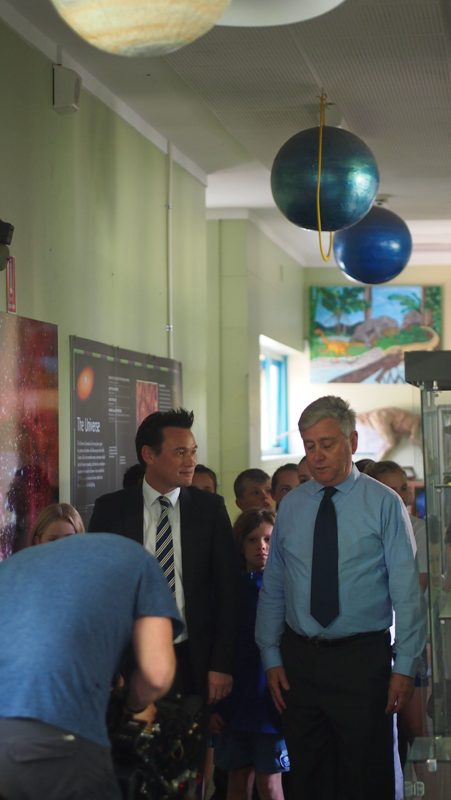 At Seaforth Public School, he and his students have painted almost every wall in their school with murals of dinosaurs and marine reptiles, and created models of stars and planets, to encourage excitement and a love for science. The school is now known by local parents as the ‘Seaforth Natural History Museum’.

“Communicating science, getting children inspired with science, engaging the community and scientists themselves with science to make it a better place for the kids—that’s my passion,” Gary says.

For his contributions to science teaching, and mentoring the next generation of science teachers, Gary Tilley has been awarded the 2016 Prime Minister’s Prize for Excellence in Science Teaching in Primary Schools.

As a specialist science teacher, Gary teaches science to every child in the school from kindergarten onwards.

“We start in kindergarten with some experiments with water and gravity. And we build on these concepts in later years, such as in Years 3 and 4 where we look at pollution and improving water quality.”

When his previous principal, Ray Ogilvy, gave Gary the opportunity to introduce a new curriculum for science a decade ago, he jumped at the chance and enlisted the help of his colleague Tarni Williams to bring in the Science as Art project.

“We started off with a couple of canvasses of dinosaurs, and it has since grown exponentially,” Gary explains.

When you look around the school now, the walls are covered with murals of space images, cretaceous marine reptiles, and dinosaurs, as well as scaled-up models of stars and planets that the children and their families have built.

Gary is also a strong advocate for ongoing professional learning for the other teachers at Seaforth, keeping them informed with how their curricula—in everything from English to music—can be supplemented with science-related activities.

And he’s mentoring the next generation of teachers through Macquarie University’s Opening Real Science program, which brings together top scientists, mathematicians, and educators to train up teachers and change how science is taught in schools.

“The student teachers at Macquarie University have been tremendously excited by this program because it’s all new to them,” Gary says.

“I’m heading towards the end of my career as a teacher, but I want to pass on my skills to the next generation.”

The mentoring extends to his students too. For the school’s annual science fair, scientists from CSIRO help the Year 5 and 6 students prepare a series of experiments; which they in turn teach to the younger kids.

“The older students really love to share their knowledge, so we’ve harnessed that by encouraging them to mentor younger kids at the science fair.”

“Seaforth is a fabulous place to teach. I can’t speak highly enough of what the community has done to help science, and the contributions they make to their own children’s education in and outside of school is tremendous.”

“This prize recognises the fantastic effort that a whole school community has put together. I hope other schools see what we’ve done and consider it as a road forward for them to make science front and centre, and get their students excited by science too.” 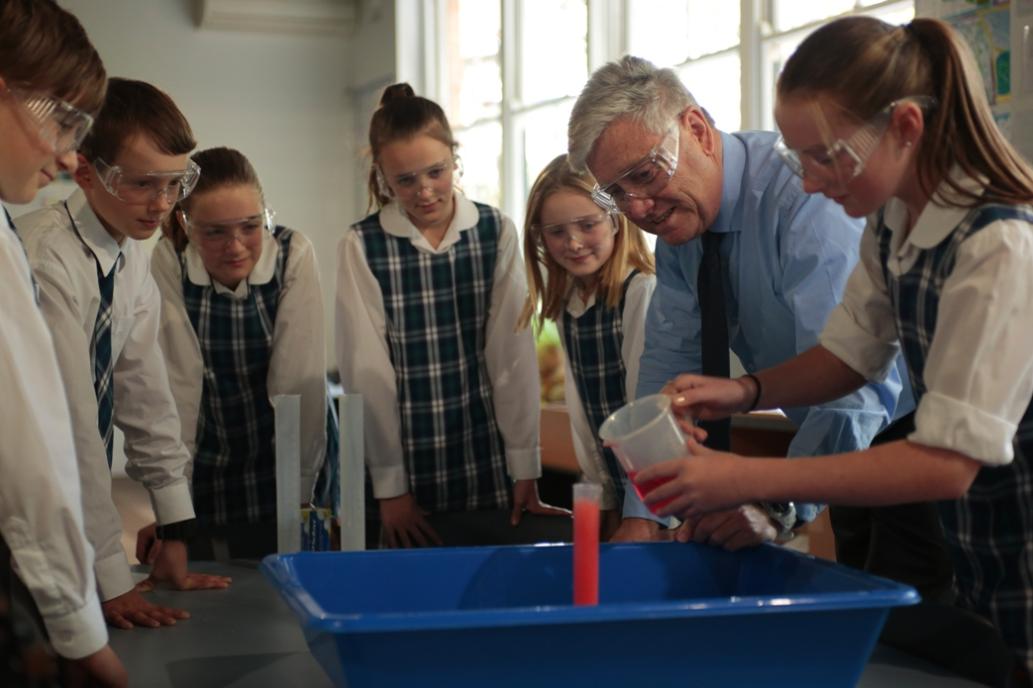 Tonight we recognise some of Australia’s greatest scientists, innovators and teachers for outstanding achievements in their fields.

The $250,000 Prime Minister’s Prize for Science has been awarded to evolutionary biologist Professor Richard Shine of the University of Sydney in recognition of his work to ensure Northern Australia’s peak predators – snakes and lizards – are more likely to survive the cane-toad invasion.

Professor Shine has created traps for cane toads, taught quolls and goannas to avoid toads, and now plans to release small cane toads ahead of their potential arrival in new areas so predators survive their first meal of cane toad but have an aversion to eating them again.

Global stock markets are being made fairer and more efficient thanks to the work of Professor Michael Aitken, recipient of the $250,000 Prime Minister’s Prize for Innovation.

His researchers have developed a spin-off company that is targeting health and other markets and identifying billion dollar frauds and inefficiencies in Australia’s health markets.

Winner of the inaugural $50,000 Prime Minister’s Prize for New Innovators, Dr Colin Hall, a Senior Research Fellow at the Future Industries Institute at the University of South Australia, is creating jobs and exports through new car part technologies.

The innovation awards recognise outstanding researchers who have turned scientific research into a direct benefit to Australia’s economy, driving innovation and helping Australian industry thrive in a changing world.

Other Prime Minister’s Prizes for Science winners are:

Associate Professor Kerrie Wilson of the University of Queensland is using economics and maths to protect tropical forests, and guide bush renewal, and receives the $50,000 Frank Fenner Prize for Life Scientist of the Year.

Professor Richard Payne of the University of Sydney is reengineering proteins from nature to fight TB, malaria, stroke, and cancer, and receives the $50,000 Malcolm McIntosh Prize for Physical Scientist of the Year.

Miss Suzanne Urbaniak from Perth is turning students on to geoscience, and receives the $50,000 Prime Minister’s Prize for Excellence in Science Teaching in Secondary Schools.

Mr Gary Tilley from Sydney is bringing science into the next generation of primary school classrooms, and receives the $50,000 Prime Minister’s Prize for Excellence in Science Teaching in Primary Schools.

As the calibre of these prize recipients demonstrates, this is an exciting time for science in Australia.

The work that is happening in labs, universities and institutions now will position us to succeed in the years, decades and generations to come.

Scientists’ work improves our understanding of the world around us, helping to tackle issues that confront our country in medicine, conservation, trade industry and many other areas.

We also rely upon outstanding science teachers open the eyes of the next generations to the value of science, enabling them to make decisions in their lives based on evidence and scientific principles.

2011, 2013 Presented at the Annual Conference for the Science Teachers Association of NSW (STANSW)

2010 Initiated the CSIRO Scientists and Mathematicians in Schools program at Seaforth Public School, and promotes the program widely to other schools