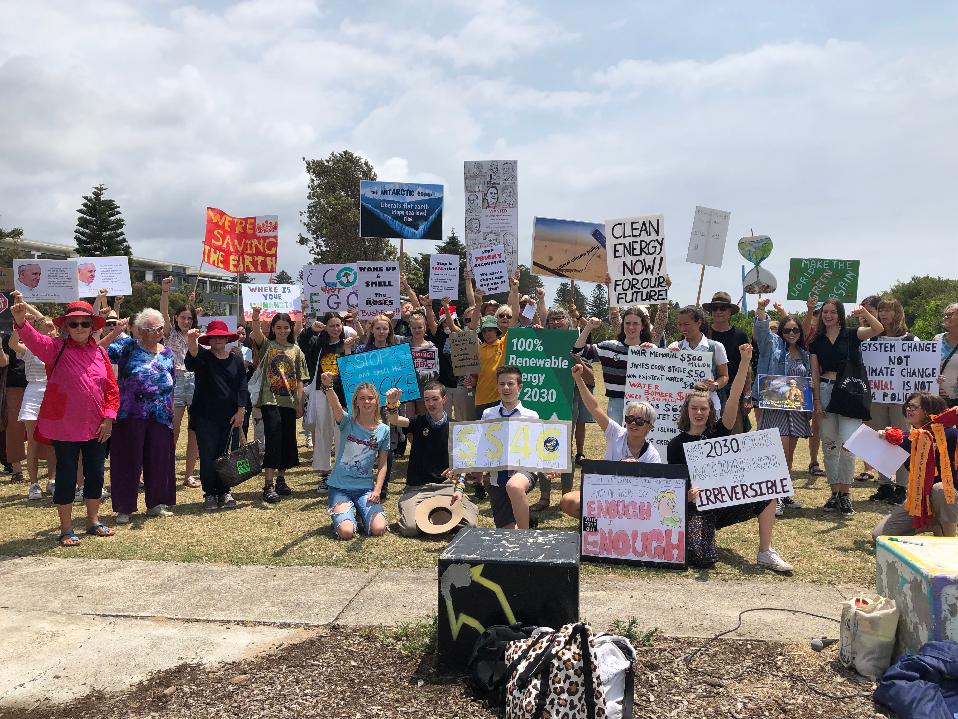 Pittwater residents who work in the CBD were called on to evacuate via smoke alarms going off in their buildings on Tuesday this week. The alarms, triggered by the thick haze of smoke from bushfires choking the city and not moving all day, added a surreal aspect to what has already been months of not being able to see the sky and a permanently red tinge to the sun. Some refused to leave their offices, stating the air outside was too thick with ash and smoke, citing months of already suffering from health problems triggered by the constant and incessant smoke.

They wondered how all the volunteer firies were coping and what irreversible respiratory problems they would be suffering from by now.

More than 7000 bushfires have raged across New South Wales since July, months before the official start of bushfire season, in what firefighters have described as the "most challenging bushfire season ever”. Scientists say the size, of over two million hectares, and severity of this year’s blazes are “unprecedented”.

Wildlife Carers state thousands of koalas, kangaroos, possums, bats, birds and other native animals have died as a result of the fires. The the ash falling over Sydney and Pittwater is actually composed of their cremation along with millions of trees and hundreds of peoples homes. The ongoing dust storms from inland areas and that ash has settled over everything.

In the months leading into the fires these animals were already dehydrated and half starved due to prolonged drought conditions affecting their food trees and making nail hard the dirt they once cropped grass from or dug for worms. Coupled with the ongoing destruction of their habitats through land clearing, and bearing in mind a new report this week from the International Union for Conservation of Nature states that of our iconic keystone gum trees almost 25% of those 826 eucalypts species are threatened with extinction, the animal populations they support are now, also, on the brink of extinction.

Pittwater's first bushfire for the season was in Winter, commencing on August 18, at Longnose Point in the Ku-Ring-Gai Chase National Park. By August 20 they were still trying to put this fire out, with a number of RFS volunteer Brigades supported by National Parks staff and water bombing helicopters working to extinguish the fire.

Since then Pittwater Online has run weekly updates of the horrifying and frightening conditions all our local NSW RFS volunteer Brigades have sped to assist with, being deployed up and down the coast of New South Wales for days at a time.

As we go to press for the final Issue of the year one volunteer firefighter has published an open letter to the Prime Minister on the Facebook social media platform that has been shared over 5000 times:

I am writing to you as a member of the Far South Coast of NSW community, and as a bush firefighter with our local RFS Brigade.
You need to listen to me.

I swore that if I heard the word, "unprecedented" one more time I would write to you. I heard it again tonight in comments by experts over the mega-fire around Sydney. So, here's your letter.

There is one more thing that is 'unprecedented'. It's your Government's complete INACTION over the current bushfire emergency in Australia. And please don't tell me about the pathetic response so far with more thoughts and prayers from Hillsong. This is a NATIONAL EMERGENCY not a minor weather event.

We are not frantically impressed with these platitudes down here. When I see my colleagues from my brigade jump into a plane or a bus to take them up north in a strike team to go into battle against an unprecedented enemy of catastrophic proportions, I wonder if we might ever see them again. And they are my friends and wonderful people.

When my RFS pager goes off in the middle of a hot, blustery severe fire danger day and I have to rush off to a bushfire, and as I am sitting in the truck proceeding under sirens and lights to the fire, I wonder if this might be my last day too.

We don't have time for you to sit on your hands and wish us platitudes and cricket news.

Here's what we need you to do:

On Wednesday thousands rallied in Sydney to demand urgent climate action from Australia's government. The 'snap strike', (NSW is Burning, Sydney is Choking - Climate Emergency Rally!) saw people crowd Town Hall, with one police officer at the scene estimating the number of protesters may have exceeded 7,500. Pittwater residents were among them.

On Friday December 13, 2019 the School Strike for Climate Change brought another of numerous protests that have taken place on the peninsula during this year to the office of our Federal MP.

This is what the Students had to say about climate change and Mackellar MP, Jason Falinski, at their rally outside his office on Friday:

Thank you all for coming today, for coming together to tell Jason Falinski to stop ignoring all the signs and do something about this ever-growing issue before it’s too late.

About two weeks ago, just after we announced this strike, my parents showed me part of a magazine. What did it say? It was an ad about Jason Falinski. What did that ad say? It said that he was here to fight for our issues in parliament! But yet there he is, voting against renewable energy!

Fires are burning all across Australia, millions of hectares of land destroyed, but what is Jason Falinski doing -  helping the fires burn, feeding them. He even goes so far as to vote AGAINST protecting the Great Barrier Reef! What do you think of that?

On top of this, despite the bushfires raging across Australia, Jason Falinski voted very strongly AGAINST treating government action on climate change as a matter of emergency! What do you think of that?

I have personally seen the damage caused by these bushfires when I was on a school band tour last week. We passed through a thirty-thousand-hectare fire-affected zone (en route to Port Macquarie), and it was terrifying. Thousands and thousands of trees, standing there like skeletons, stripped of their life, burnt to a crisp. Thousands upon thousands of hectares of charred earth, all the life it once harboured, incinerated. Yet Jason Falinski still disregards the problem like it is nothing, like it’s not a threat. What do you think of that?

I have been involved with both the September 20th and November 29th Actions this year. I am a part of the School Strike 4 Climate Sydney Electorate organising team of which there are around 150 high school students from around Sydney. Like many of the others, I am on the team because I'm scared for my future, I'm scared for the planet. I was also the lead organiser and MC for the December 13th Falinski Strike action. The strike amassed around 70 people and children from around 15 schools. At the strike, the speakers were first, followed by the message writing (writing climate change messages for Falinski on pieces of fabric) and lastly the march, where we marched past Falinski's office and strung up the messages outside his office. A few of the organizers and I went inside his office to see if he was there and apparently 'He was at a school presentation'.

My name is Leila Mangos. I am 16-years-old and I am a school student. In fact, I should be in school right now.

I should not be standing up here. We shouldn’t be forced to strike from school so that our

government listens to us.

November marked one year of School Strike 4 Climate – one year of growth and battles, and yet we’re still fighting. We shouldn’t be. Young people are the core of this movement and it is giving politicians an excuse to disregard us and what we stand for.

How many of you here have been told by adults “good on you for fixing the climate!” and “the future is in good hands!”. We are tired of being told time and time again that it is our responsibility to fix the broken planet that we have inherited, because by the time we have grown up and are in a position to implement change, it will be too late.

The effects of climate change are expected to be irreversible by 2030. By that point, I will only by 26. My life will have barely begun. The government wants us to go to school? Why should we, when we have no future worth preparing for? I’m here because I went to school and I learnt the science. Perhaps it’s the government that needs to go back and learn a thing or two about how the Earth works.

If they did, they’d know that nature does not need us, we need nature. Everything that we rely on to survive, from power and infrastructure to food, comes from the Earth, and unless the government and governments around the world implement sustainable strategies to take what we need from the Earth without compromising the needs of future generations to come, our future is looking pretty bleak. If we continue to treat the Earth like we currently are, there will be no liveable future for us, our children or their children. I’m here, today, because I’m pretty mad about that. Politicians need to grow up so that we can. They need to see that this crisis is bigger than their campaigns and bigger than any problem the world has ever had to face. We are talking about the very planet we live on, the survival of all living things – animal, plant and human.

I used to say that when I grew up, I was going to be an actress or a therapist. Now, when adults ask me what I want to be when I grow up, I say alive. I feel the responsibility to pursue a career in politics because it seems as though current politicians are not doing their jobs properly. Australia is on fire! What more will it take?

Young people may be 25% of the current population, but we are 100% of the future. It can be easy to forget that we are not only the “future”, but also today’s youth. We are valid and we matter. The fact that our validity magically appears the minute we turn 18 proves that the government cares more about their campaigns than us.

Well, guess what, government? For hundreds of thousands of Australians, our 18 th birthdays are less than a few years away. You better clean up soon, because change is coming, whether you like it, or not.

I have been enthusiastically involved with School Strike 4 Climate since the global strike on March 15th earlier this year in Sydney’s city. I can’t put into words how exhilarating and empowering is the feeling of standing amongst a crowd that is equally as passionate as you. Up until that point, the stress and anxiety of climate change had been personal. Going to strikes gives me hope that perhaps enough people care, and if that is true, the government will have to change to appease the majority. Since that initial strike, I’ve been to five more, the most recent being the 13th of December 2019. I was invited to speak at the strike, which was held outside Jason Falinski’s, member for Mackellar, office. He has recently made some decisions that will damage the environment unless reconsidered, hence the school strike. We had an approximate 100 people turnout with a range of ages - and the passion was incredible. We started at a nearby park (at the beachfront next to Robertson Rd, Narrabeen) before marching outside Mr Falinski’s office, where we chanted peacefully and strung up messages outside his office. I am so glad I joined in – every strike I attend never fails to fill me with purpose. 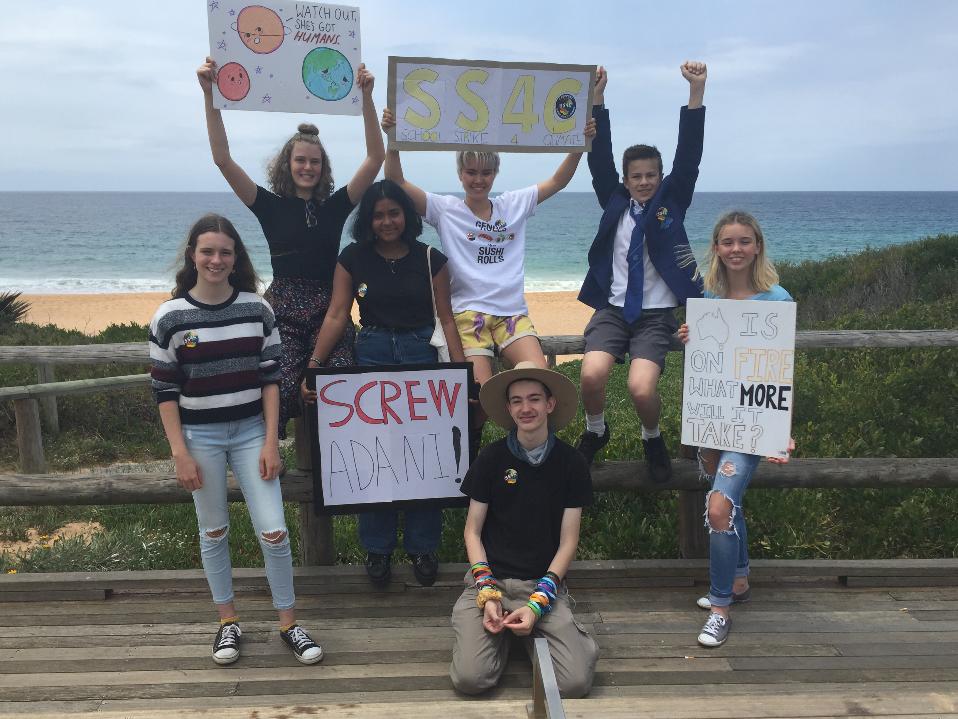 Organisers of the School Strike for Climate Change at Narrabeen - December 13, 2019 Rally 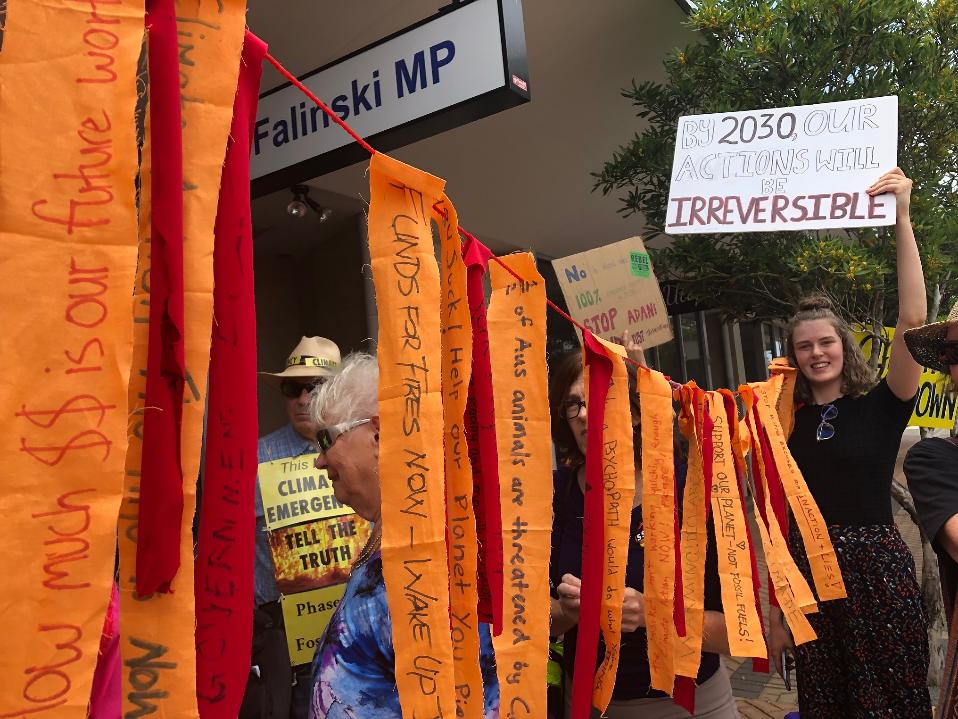 Message left for the MP for Mackellar