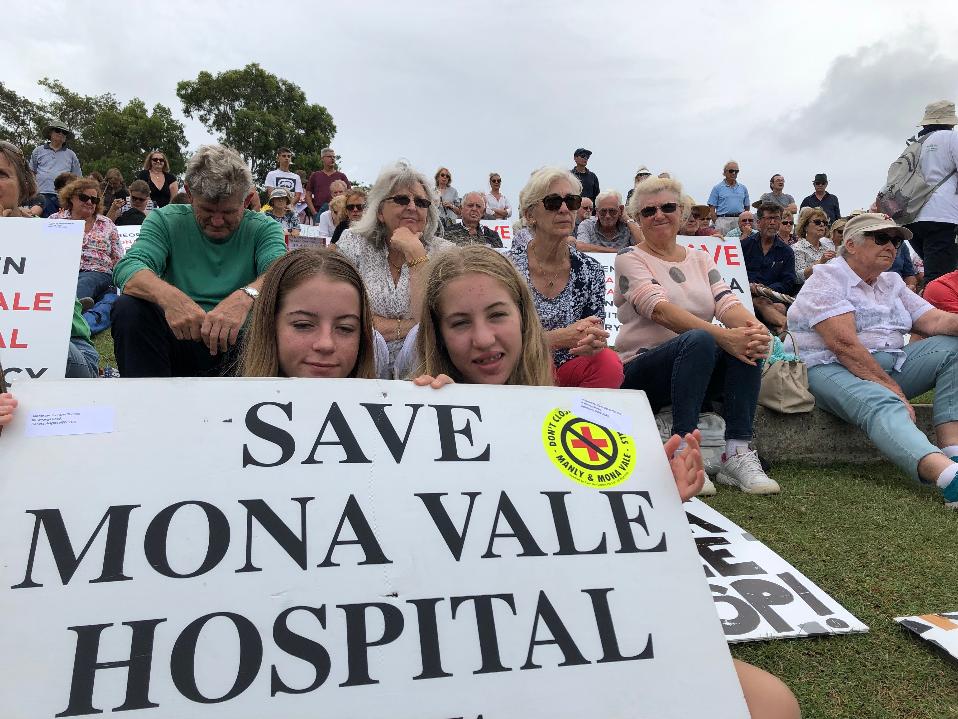 When the emergency department at Mona Vale Hospital closed last October, many in the community were worried about the extra half hour drive from Pittwater to reach the shiny new Northern Beaches Hospital.  The frequency of Wakehurst Parkway flooding  – the most direct route to the hospital – and its closure during bushfires did nothing to soothe the nerves of locals.

Neither did awareness of statistics from the emergency department at Mona Vale. In 2017-18, 182 patients were resuscitated on arrival; another 4,850  needed treatment within 10 minutes; and 12,398 within half an hour.

With drownings and injuries at local beaches, accidents at skateparks and in school holidays, and illnesses amongst community elders, residents were worried that the extra travel to the new hospital would mean many would not make it in time or outcomes would be less successful.

The situation was only exacerbated by the serious shortage of paramedics across NSW, with waits of an hour and a half for an ambulance in Pittwater not unknown.

Even as Pittwater Online went to press this morning publication was delayed in monitoring and then sending out or posting Notices regarding flooding in the Narrabeen Lagoon catchment. The last 24 hours saw 92mm of rain fall. Since Thursday, we've seen 254mm of rain. By 6am around 20-30cm of water covered the Wakehurst Parkway but it wasn't until 11 a.m.that Live Traffic advised flooding at Oxford Falls had closed the road in both directions.

Further inundations followed, with flooding at Dee Why as well, with warnings to expect delays and extra travel time.

Save Mona Vale Hospital chairman Parry Thomas expressed surprise that a Notice the Parkway was closed took so long to be published given that Saturday night and Sunday morning had teemed until 3.30 this afternoon, Sunday March 17th. The Parkway is still not open and not likely to be with advice that the lagoon will flood further with the 6.30 pm tide, causing further and higher inundations as water cannot run out, and asking residents to move to higher safer ground if their premises are affected.

"With Wakehurst Parkway open this morning despite 20 to 30cm of water over the road, could it be that what we've heard - that the road is being kept open for longer under political pressure - is true?" Mr. Parry said to Pittwater Online this morning

"If it's true, it demonstrates the depths to which our local politicians are prepared to go to hide the reality of the limited access to the new hospital.

"This one action puts further puts the lives of our community at risk." he said.

The dysfunction that occurred at the privately-operated Northern Beaches Hospital on opening as a replacement for acute services at the public Mona Vale and Manly Hospitals has been well-documented, along with NSW Premier Gladys Berejiklian and Health Minister Brad Hazzard’s response that they were just “teething problems”.

Pittwater MP Rob Stokes, despite many appeals from the public and protests, has continued to rule out re-opening full acute services at Mona Vale.

On Saturday Pittwater community residents staged an election eve protest, calling for emergency, surgery, maternity and other acute services to be reopened at Mona Vale and the problems at the new “hospital on the hill” to be resolved.

Mr Thomas told the crowd the story of a woman who recently had a heart attack in Avalon, and after waiting for an ambulance to come from Balgowlah was taken to Northern Beaches Hospital at Frenchs Forest. There she was placed in a ward but staff failed to keep records, failed to keep her on a drip despite being “nil by mouth” for over 24 hours as she waited for surgery, failed to monitor her condition and failed to respond to her urgent calls for help.

During administration of a drug after her blood pressure escalated dangerously - that had potentially deadly side effects - no cardiologist was available so a pharmacist ended up supervising her treatment.

He was forced to pull up a nurse for attempting to start the treatment without wearing gloves and later for dispensing a dangerously high dose and failing to measure the patients’ vital signs regularly, at five minute intervals.

After a second heart attack, a terrified wait and multiple requests while her regular cardiologist was standing by for her at The San, she was eventually transferred there 24 hours later.

The only record of the woman’s treatment was on scraps of paper that a nurse pulled out of her back pocket to hand to the paramedics who transported her to The San.

“The ambulance people asked for her records and they were non-existent,” Mr Thomas said.

“And when she got up to The San the staff, handed these pieces of papers, said: ‘What do we do with this? We’ve just got to start all over again.

“Now, this woman is fine, but given other circumstances there’s a damn good chance that she would not be.

“And you know that will just go through the system in the hospital as 'arrived, treated, transferred'. There won’t be anything that talks about those issues.”

Mr Thomas pointed out that the systemic issues that exist at the NBH are part of the reason that we need Mona Vale Hospital reopened with acute services now.

“It’s not the only reason,” Mr Thomas told the crowd.

“In fact, if the hospital on the hill was perfect we’d still need (Mona Vale Hospital) for the community.

“We also need the hospital on the hill, but we need it to work, because it sure as hell isn’t working now.”

Angus Gordon, former Pittwater Council General Manager, told demonstrators about the importance of the facility to him.

In one instance some years ago, Aspirin prescribed to him as a blood thinner had eroded the walls of his stomach resulting in severe internal bleeding.

An ambulance took Mr Gordon to Mona Vale Hospital where doctors and nurses had tried desperately to stabilise his condition.

“(They) used up all of the blood and they had to get more in,” he told the crowd.

“By early evening they felt I was sufficiently stable to be transferred to Royal North Shore where I was immediately operated on.

“Doctors told me afterwards that it was touch and go and that had I not got to Mona Vale so quickly, and if they hadn’t stabilised me, I wouldn’t have survived.

“So I owe my life to Mona Vale.

“More recently, I have had it confirmed that I wouldn’t have made it alive to the new hospital – and if the bleeding reoccured...

“So I really do have skin in the game.”

Mr Gordon called on politicians to start listening to and serving the community instead of the “plutocratic parasites” the government was in thrall to.

“If we are to have any chance for a democratic future and to give this amazing Pittwater community a chance for a healthy future, we need to make it clear to the politicians that we want true democracy restored,” Mr Gordon said.

Community anger over the privatisation of hospital facilities on the Northern Beaches has also been inflamed by revelations from investigative journalist Michael West that Healthscope, with an income of $8.7 billion in Australia over the last four years, has paid no tax here during that period.

That was only increased last month when Mr West reported that 43 hospitals around Australia owned by Healthscope, including Northern Beaches, would be taken over by Canadian firm, Brookfield – which already has significant infrastructure holdings in Australia and benefited from an income of $6.9 billion here over the last four years. However, the company also paid no tax here during that period and has a subsidiary in the tax haven of the Cayman Islands.

Whilst Mona Vale Hospital had a total Caesarian section rate of 29.8 per cent, NBH’s private operator, Healthscope, had much higher C-section rates at its other private hospitals, including 55 per cent at Prince of Wales Private.

“We are very concerned that intervention rates will be increased for women going through the public system at the Northern Beaches Hospital,” Ms Mooney said.

“We believe this to already be the case, but as Healthscope have not made their statistics readily available for review, we cannot yet confirm this.

“It's imperative that there is transparency over what is happening for women and their babies in our public hospital.”

Ms Mooney condemned the closure of acute public hospital facilities on the northern beaches and the opening of the new for-profit hospital, now being sold offshore.

“We cannot let this continue. We must hold our politicians to account,” she said.

“In no way is this acceptable and we absolutely need to make our voices heard.”

A lighter mood took hold during the running of an egg and spoon race at the rally, with competitors strapping on prosthetic pregnant bellies. Making a serious point, heats ran along a simulated route to the new hospital at Frenchs Forest past Mona Vale Hospital, to  Wakehurst Parkway only to be diverted due to flooding.

Earlier, local band The Rions played a set, including what has become the Save Mona Vale Hospital anthem: a rewritten version of Let It Be. A number of protesters during an open mike also recounted their experiences at the hospitals and fears of being unable to secure timely treatment.

Mr Thomas closed the event saying he had never intended the hospital campaign to be a political fight and he was not rusted on to any political party.

However, politics should be about delivering to the community you represent, he said, and called on Pittwater residents to send the Liberals a message with their vote at the state election next week. Pittwater Liberal MP Rob Stokes had really dropped the ball on the hospitals’ issue and that of council amalgamations, Mr Thomas stated.

“We don’t have any desire to tell you who to give your votes to,” Mr Thomas said to loud applause.

“However, what we want you to do is number every box 1 to 8, in the order of your preferences.

“And what’s really important in this message is that in number 8, you put the Libs.” Mr. Thomas said. 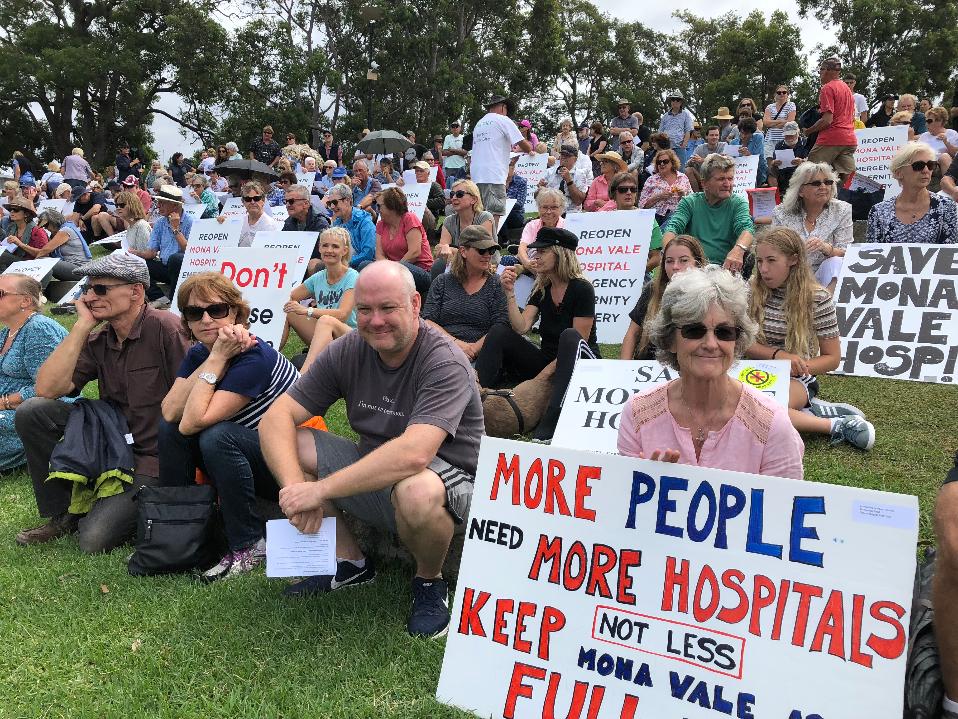