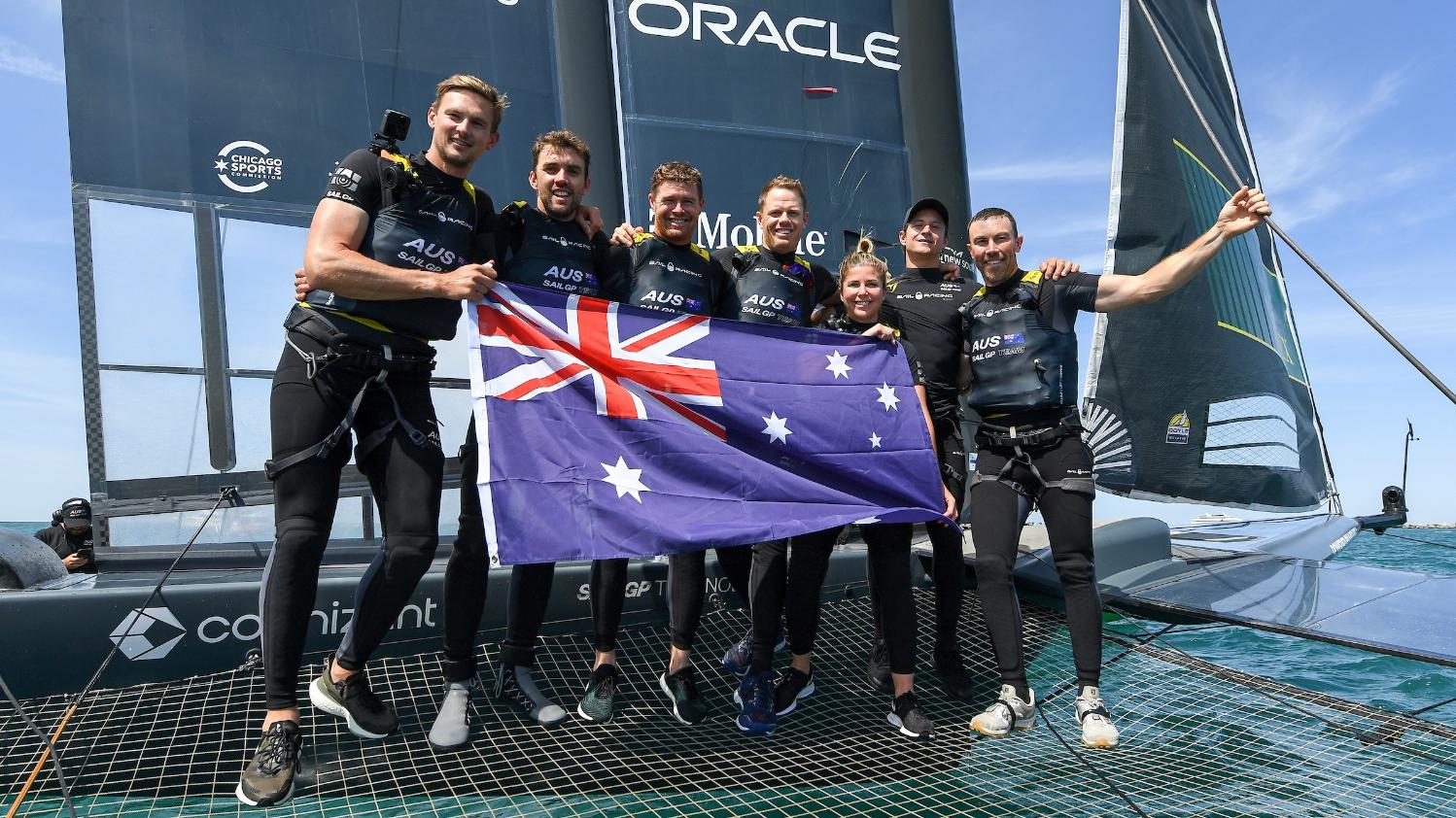 Two-time defending and reigning SailGP champions Australia have once again proved their prowess in the three boat winner-takes-all race, after scraping into the final and emerging triumphant winners in Chicago.

Tom Slingsby’s team picked up a 99% fly time in light wind conditions to blow competitors Great Britain and Canada away in an identical final line-up to the Bermuda Sail Grand Prix last month.

It marked a remarkable come back for the Aussies, who battled back from a mediocre first day of racing and a last place finish in the fourth fleet race to knock Peter Burling’s New Zealand out of contention by one point.

Australia began their faultless performance by executing a perfect race start and forcing Great Britain and Canada to follow from the get-go, leaving them free to finish their masterclass of racing in front of Chicago’s skyline stadium.

Speaking about the team’s victory, Driver Tom Slingsby described the second day of racing as ‘a day of two halves’.

“We came dead last in the fourth race and thought our chances of reaching the final, let alone winning it, were over. I thought mathematically it was almost impossible to make the final race. Somehow we turned it around and fortune went our way.”

Tom Slingsby has said he can ‘only imagine how frustrated’ the rest of the SailGP fleet are after Australia fought back from an uncharacteristically flat performance to snatch victory in Chicago.

The comeback saw the two time champions fight back from a last place finish in the fourth fleet to sneak into the final with a one point lead over New Zealand.

“I knew mathematically that it was possible to make the final race and sure enough the points worked our way,” Slingsby said.

Australia, who are notoriously deadly in a three boat winner-takes-all racing format, executed a perfect race start to leave competitors Canada and Great Britain trailing in their wake.

“We hit the line with a bit more speed and were able to get over Great Britain and Canada right at the mark - it was a race of inches on the first reach,” he said. From there, the team ‘pinned [their] ears back and went for the line’.

He pointed the team’s stellar record in ‘rising to pressure’ and performing seemingly impossible comebacks. Four members of the Australian team - Tom Slingsby, Kyle Langford, Kinley Fowler and Sam Newton, were part of Oracle Team USA, who battled back from being 8-1 down in the 2013 America’s Cup to win 8-9.

“I’ve always known how good they are under pressure, and it’s nice for these guys to get recognised and for everyone to see how unbelievable they are because as soon as we have a high pressure situation, I know they’re going to perform.”

Slingsby was candid that the SailGP fleet and even ‘some of the crowd’ are ‘feeling pretty frustrated at us.”

“[The crowd] want a new winner but our job is to win events,” he said. “I can only imagine how frustrated the teams are seeing us sneak into the final race and win the event.”

However, pointing to Australia’s 7-2-3-9-1 fleet racing record in Chicago, Slingsby said it was clear that the team is ‘very beatable’.

“We were so close to not being in that final today but we managed to sneak in and get the win,” he said. “The job was 95% done but [the fleet] left a little opening and no-one went for us in the last race.” 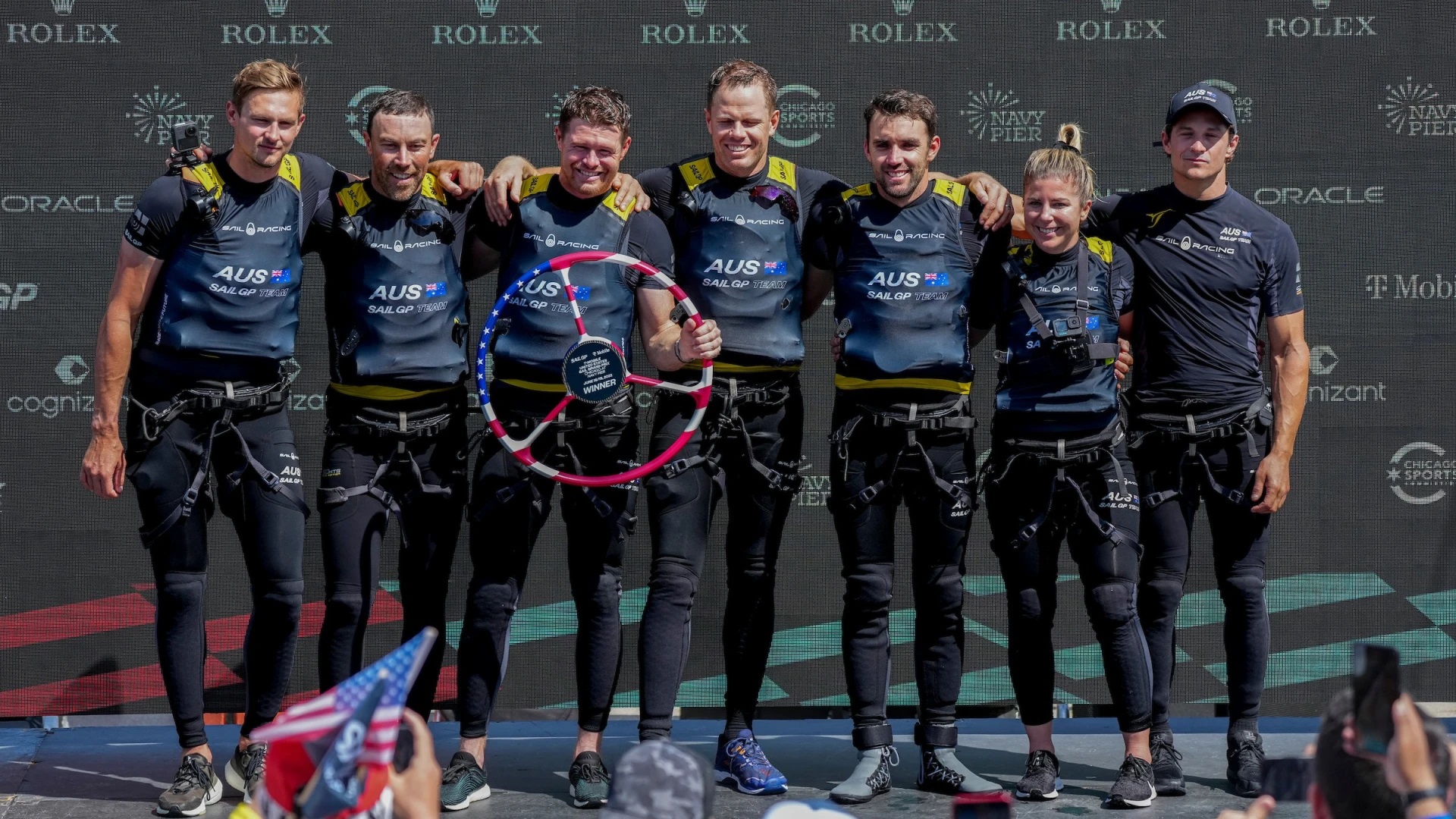 Elsewhere, Pittwater's Jimmy Spithill’s USA team, home favourites on Lake Michigan, secured a third place finish in the final fleet race of the weekend, but it proved too little, too late, leaving the team in last place on the event leaderboard.

U.S. Driver Jimmy Spithill, stated on the team’s disastrous performance in Chicago, they have ‘no excuses’.

The team failed to perform in front of the home crowds lining Navy Pier and finished the weekend with an 8-9-7-7-3 racing record and 8th on the overall leaderboard. It comes after the team kicked off the season with an average opening performance in Bermuda last month, in which they finished 5th overall. Spithill admitted the team ‘haven’t started Season 3 as we hoped’.

“One of the best things about sport is that it humbles you, you are never safe - and at the top level, things can change at any time,” he said. 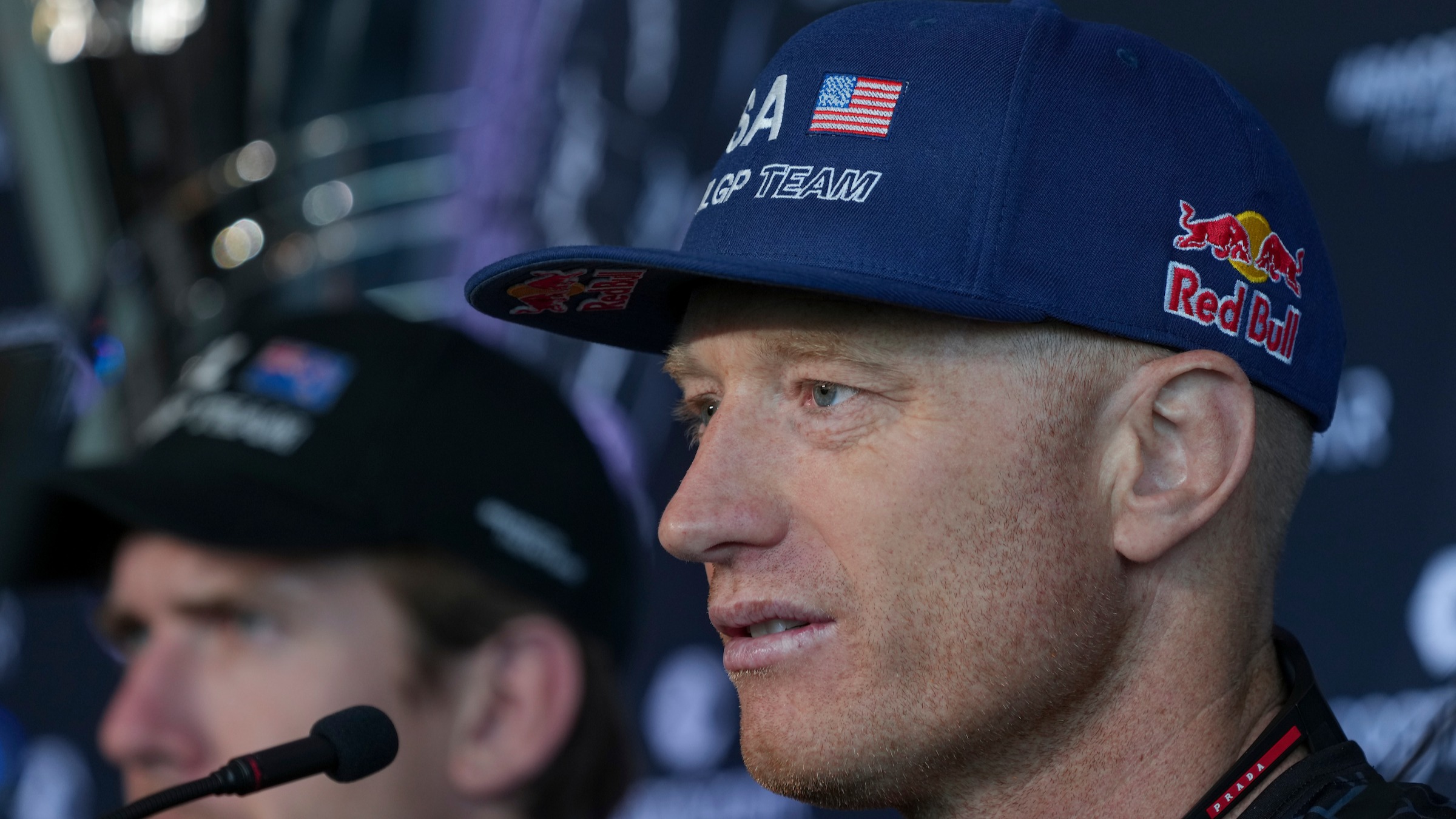 Writing for Red Bull, he said: “I’m glad we managed to grab a podium in the final race to give the fans something to cheer, but we let a lot of people down on Navy Pier.”

The teams grappled with the additional challenge of racing in the freshwater of Lake Michigan for the first time. Freshwater, which has a lower density than salt water, increased boat speed by about 5% and meant take-off speeds needed to be around around 2 km/h higher for the boats to foil.

“The freshwater racing was really different for the teams as the foils react differently - you need more speed to lift, and it’s tougher to stay flying when you do,” Spithill said.

Ahead of the the Great Britain Sail Grand Prix | Plymouth next month, Spithill said the team would be reviewing the ‘footage and data’ from the weekend to ensure they ‘learn the lessons’ of what went wrong.

“These tough moments are a great test for high level teams: we’ve dug ourselves this hole, and we’ve got to figure out how to climb back into contention,” he said. “We have to keep working hard and cut out silly errors and mistakes on the water - myself included”.

He emphasised his confidence in the team, adding “I believe we have the right tools and the right people.”

Reflecting on the wider fleet, Spithill said the collective quality of racing on the SailGP circuit is ‘rising all the time’

“It’s no coincidence that the teams with more reps and hours together tend to be the ones at the top - having said that, it’s now not strange to see someone win a race, and then finish in the back in the following race,” he said. “This shows that any team can win.”

Aside from the team’s performance, Spithill described the event as a ‘massive success’.

“The atmosphere was incredible (…) it’s probably the closest thing to a sports stadium that I’ve seen in sailing,” he said. “Honestly, those fans deserved a victory, and we hope to come back and give them a better performance.”

Keep up to date with SailGP Season 3 at: sailgp.com