PRO SURFING TO DESCEND ON MANLY THIS WEEKEND: VISSLA SYDNEY SURF PRO IS ON FOR 2019!! 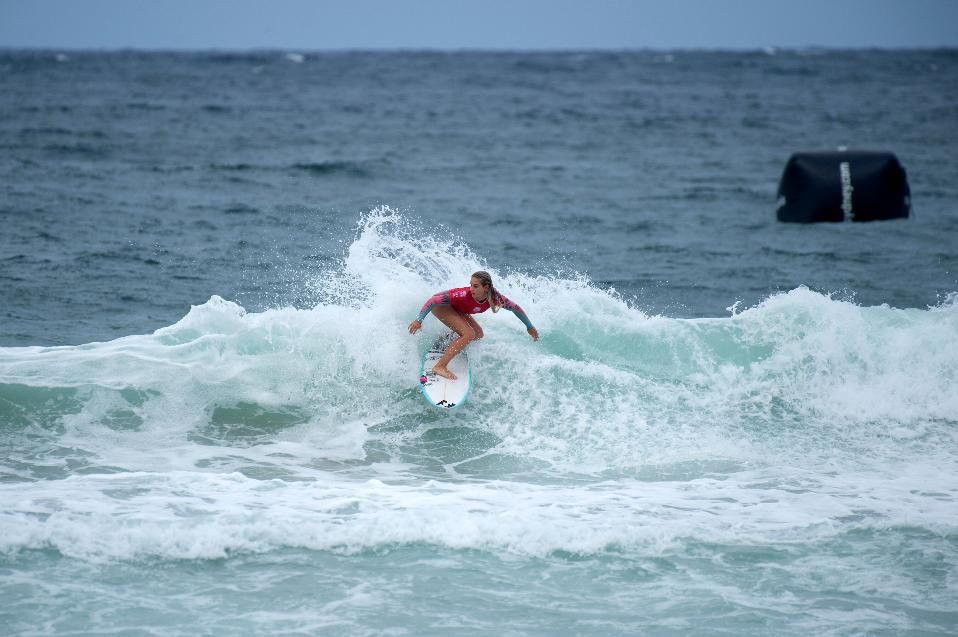 All the professional surfing action will kick off in Manly tomorrow with the opening day of the Vissla Sydney Surf Pro.

The 2019 Key Sun Zinke Sydney Pro Junior will occupy the opening weekend and will kick off tomorrow, while the QS6000 divisions will run from 18th – 24th March 2019.

After taking out the recent Carve Pro and Vissla Central Coast Pro, former WSL Championship Tour (CT) Rookie of the Year Connor O’Leary is excited to continue his momentum at Manly.

“I’m really excited to be back in Manly for this event,” said O’Leary. “It’s so close to home and to be surfing for potentially 6000 points, when it’s only an hour away, feels great. Hopefully, I can take the title back to Cronulla with me.”

Results can be seen below. 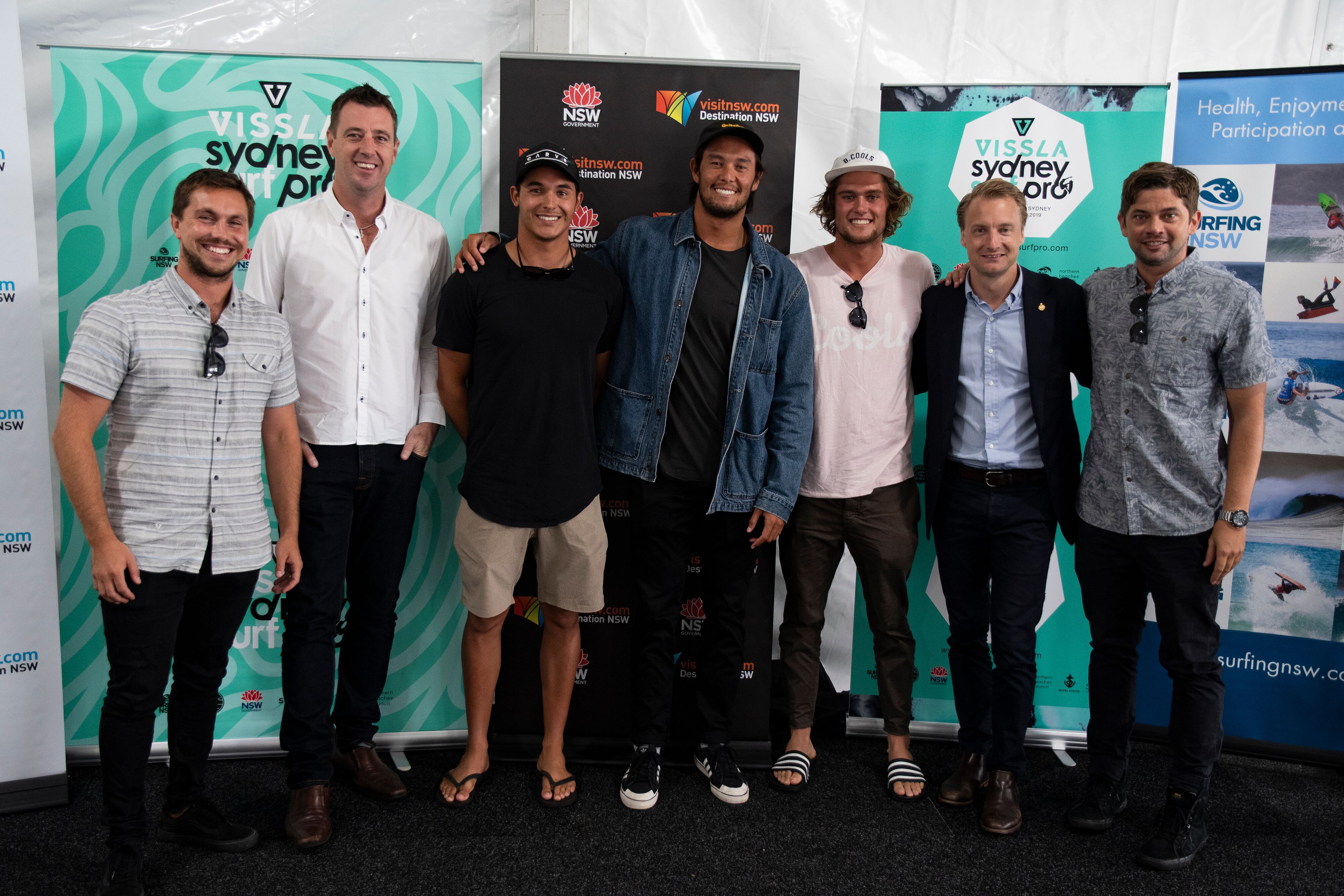 The 2019 Key Sun Zinke Sydney Pro Junior kicked off the first of nine days of the Vissla Sydney Surf Pro with some of the world’s most promising junior surfers tearing apart the junky two-foot surf.

Local Manly surfer George Pittar (Manly, NSW) showed his knowledge of the shifting beachbreak conditions, picking the eyes out of the best waves of the heat and as a result, was rewarded with a solid 15.65 two-wave heat total. Pittar was greeted by much local fanfare on the shoreline from his local North Steyne Boardriders Club following the heat.

“It’s epic surfing a comp that is right here on my local beach,” said Pittar. “I knew that there would be the potential to get some decent scores out there, but you had to make sure you were on the best waves. It was an awesome feeling coming in to be greeted by the guys I do boardriders with and it makes the win so much sweeter.” 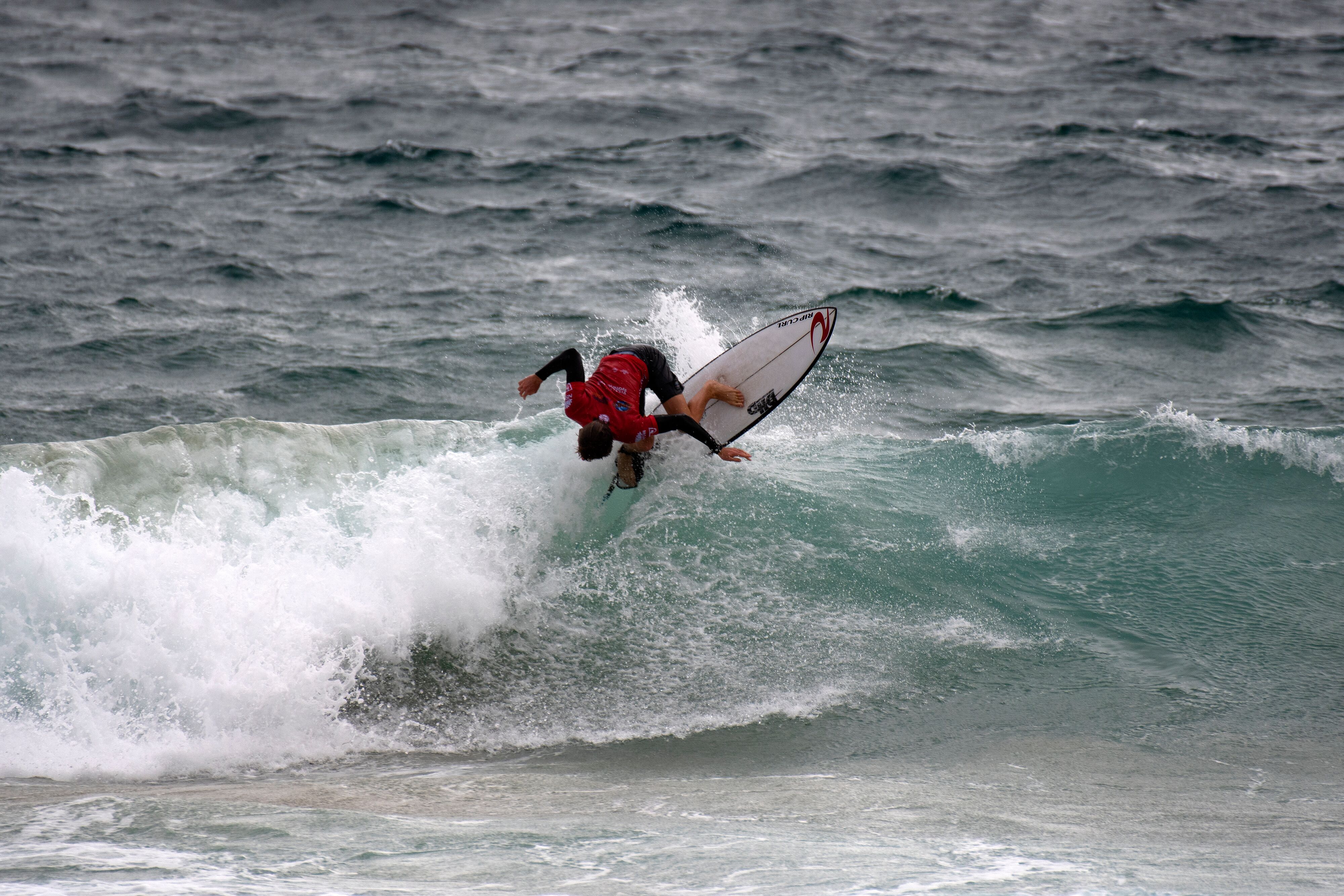 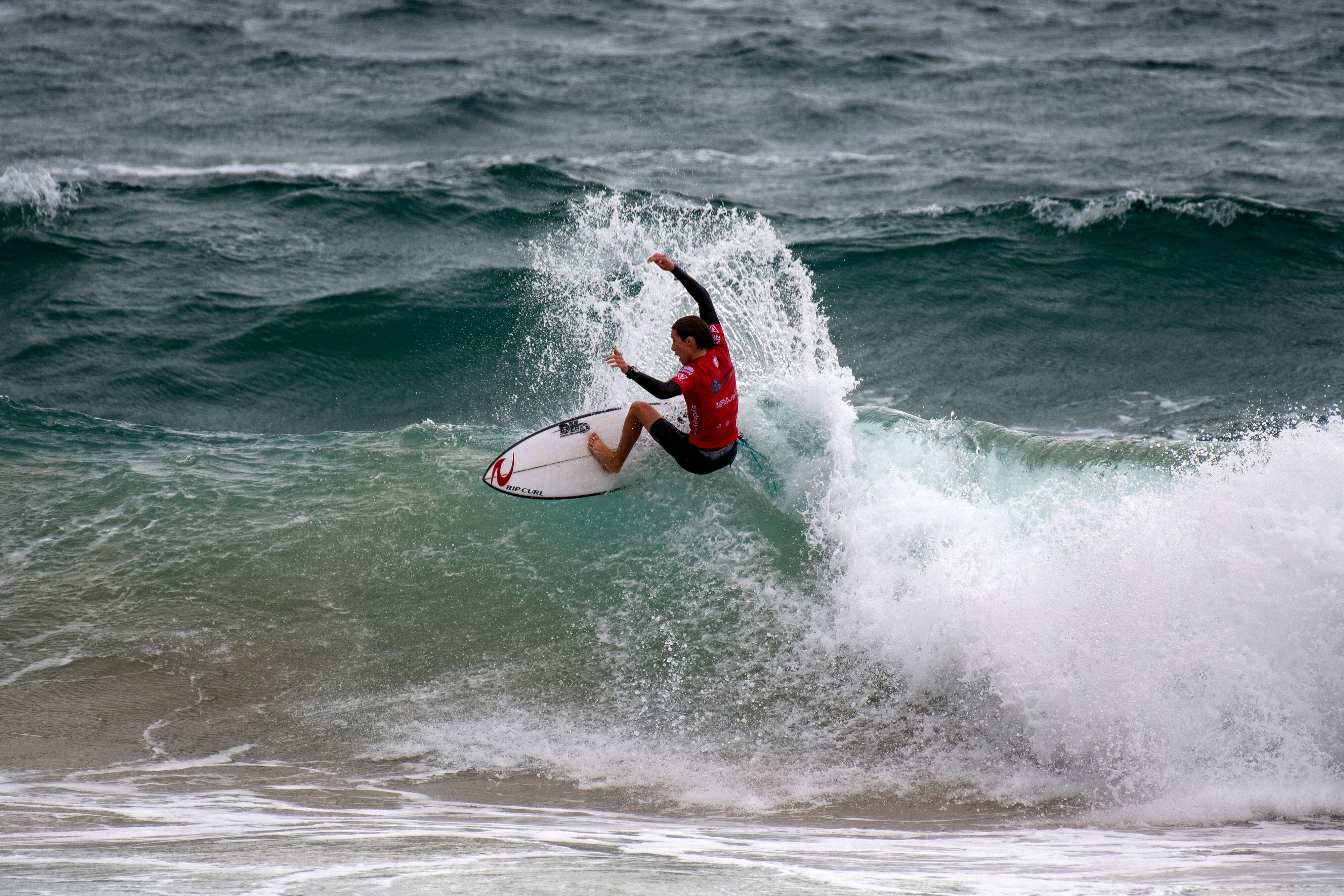 Currently sitting in second position on the Australia/ Oceania Junior Tour rankings, Xavier Huxtable (Jan Juc, Vic) made sure he solidified his spot at the top end of the ratings, taking a massive round one victory. The Victorian natural-footer executed a handful of stylish and polished forehand wraps to notch up a 15.05 two-wave heat total and take a convincing win.

“There were a couple of waves out there that gave up good opportunities,” said Huxtable. “My gameplan was to get one good wave early and then wait to chase a backup. I try to forget about the rankings at each event, and just surf, but it would definitely be good to go up a spot or keep myself where I am by the end of this event.” 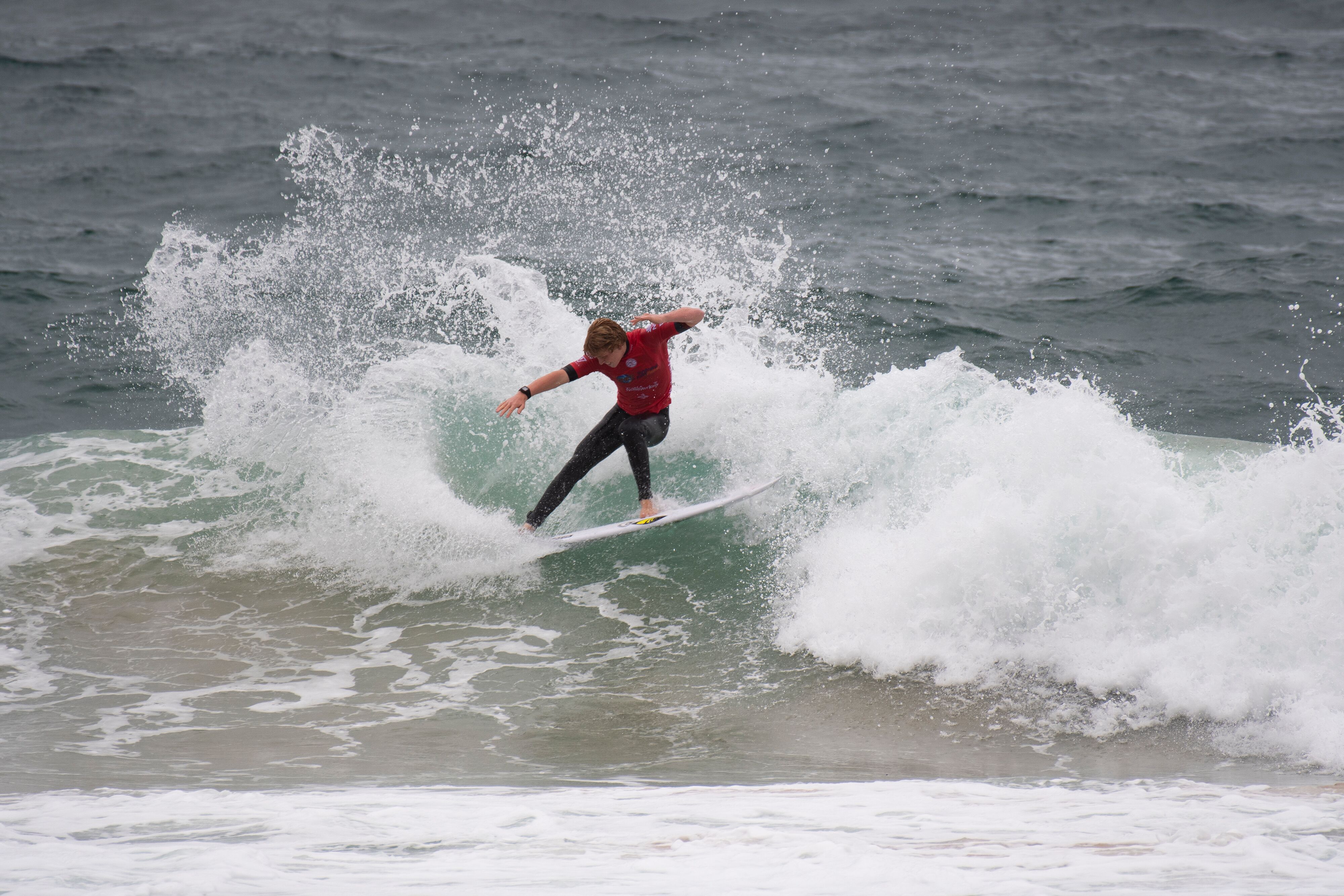 Coming off an applauded performance at the nudie Australian Boardriders Battle National Final, Alister Reginato (Sunshine Coast, Qld) continued to show the level of talent as he emerged in his opening exchange at Manly. Reginato found a handful of diamonds in the rough over the course of the exchange to post an excellent 8.25 wave score for a variety of critical backside snaps and cement his spot into the second round. 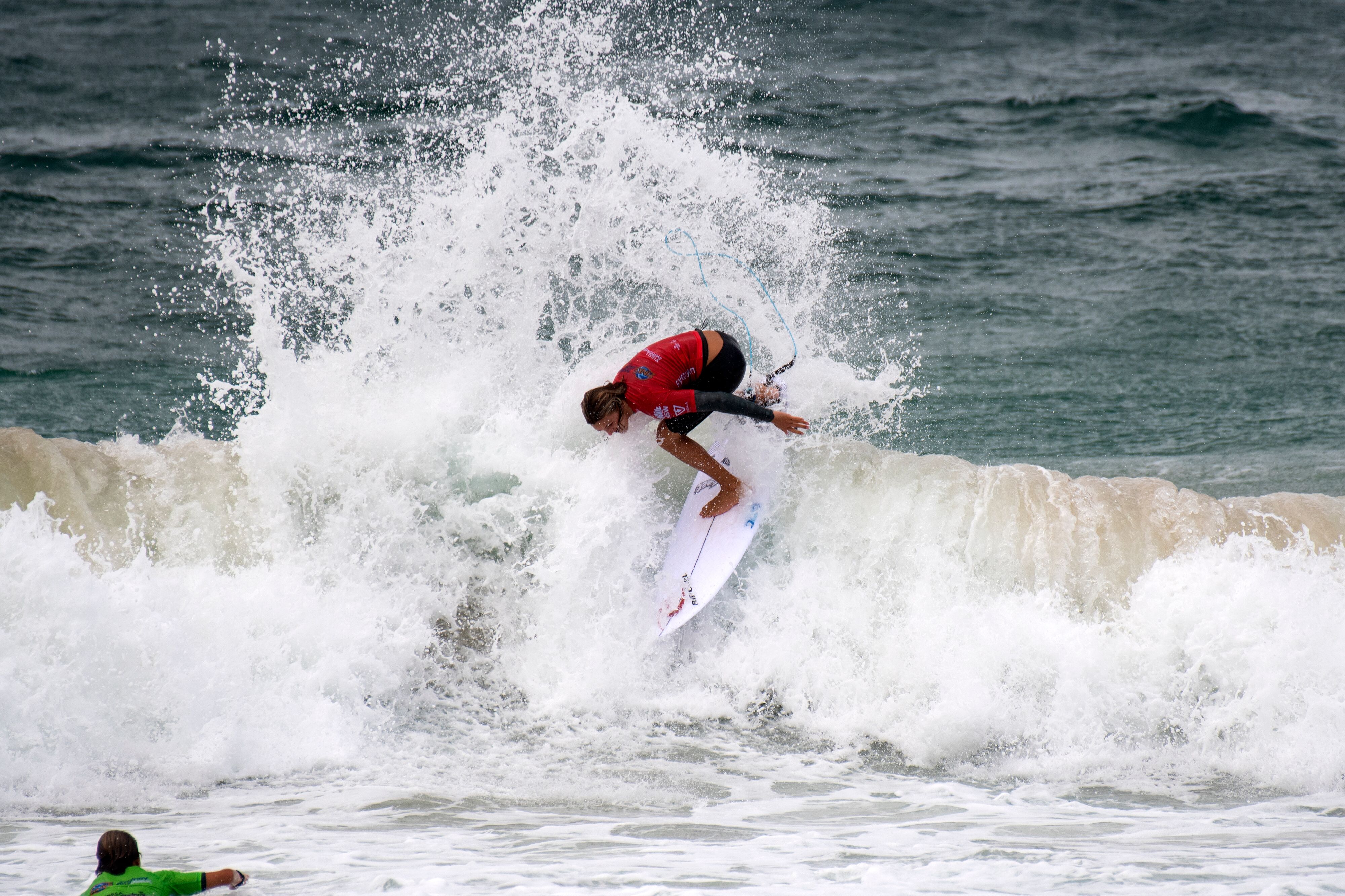 “I was pretty lucky that I stayed busy and got in rhythm with the waves,” said Reginato. “It was hard to develop a heat strategy out there when the waves a bit mushy and there’s not one take-off point, so I just opted to move around a lot. I’m stoked with how this year is going so far. My surfing is where I want it to be and hopefully I can keep this run going.”

Holly Williams (Sunshine Coast, Qld) synced her powerful backhand repertoire with the mushy righthanders on offer, finding a handful of decent pockets. Williams knocked out a chain of impressive snaps to post a respectable 7.25 wave score and take the win ahead of an also impressive Carly Shanahan (Wooli, NSW). 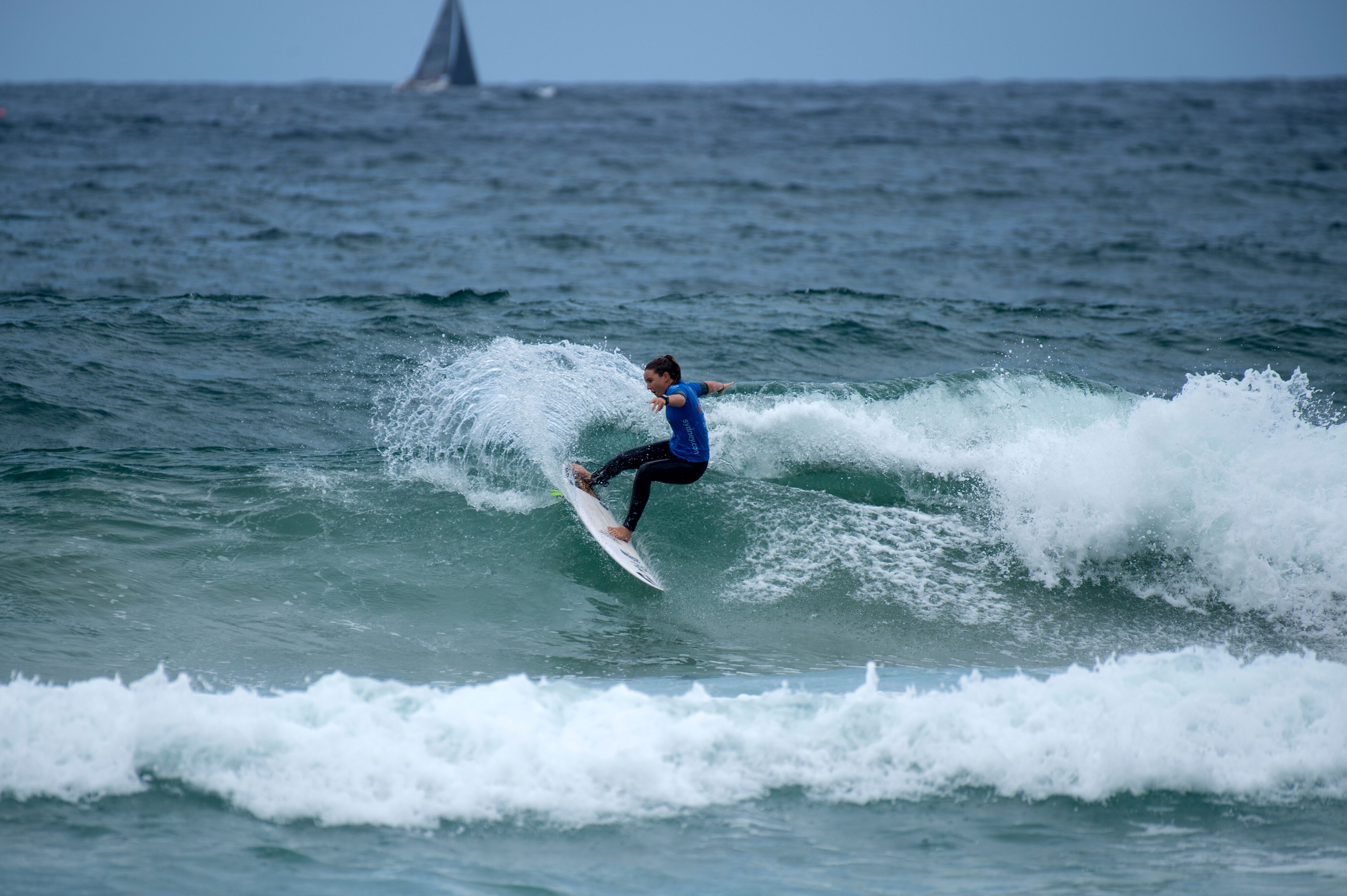 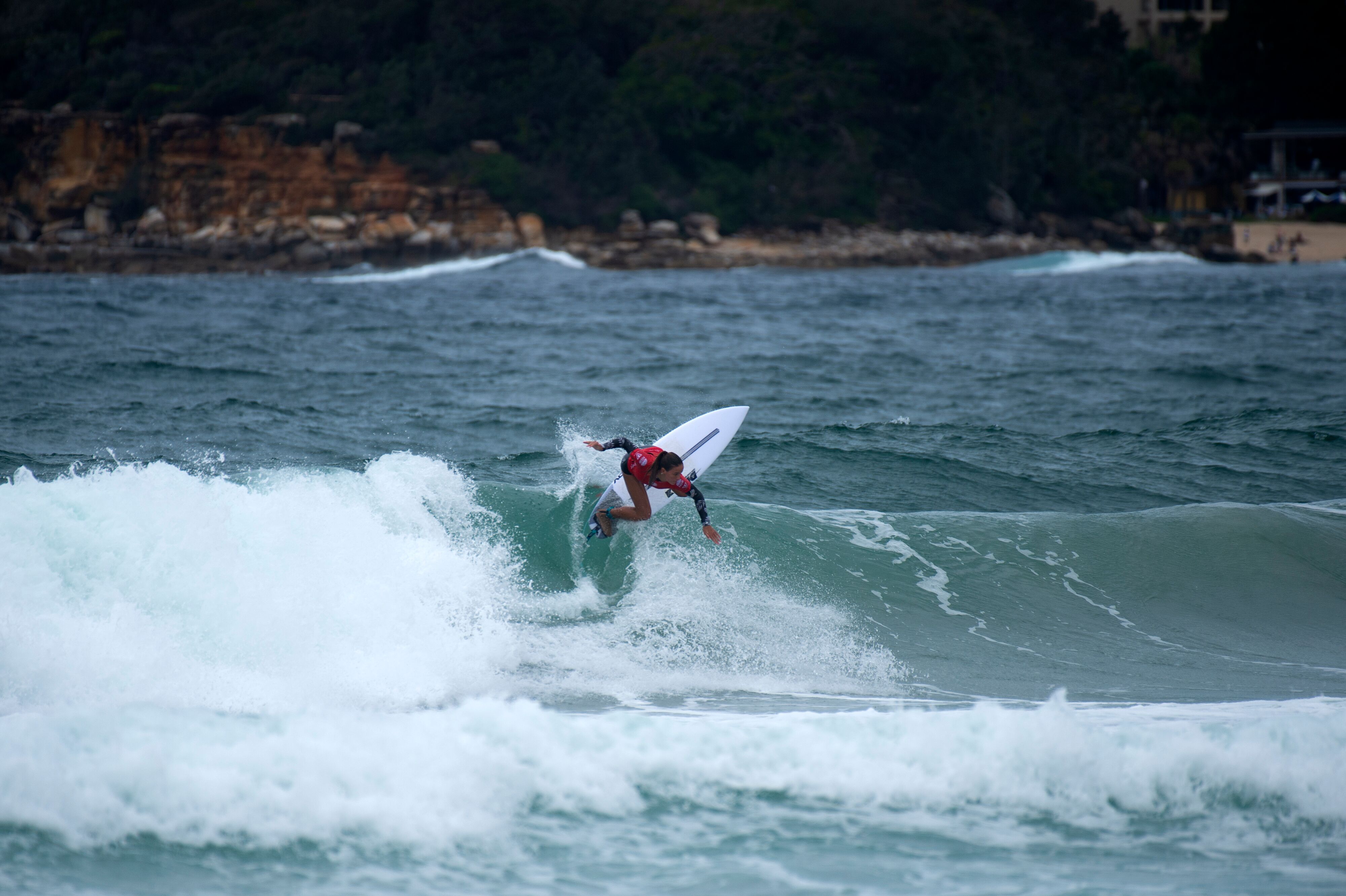 “I’m so happy with that win,” said Williams. “The waves had a bit of potential if you found the right one and thankfully I got one good one that allowed me to get the win. I set the goal to make the final and go from there in this event.”

Having claimed the last two Pro Junior events in Australia, Molly Picklum (Shelly Beach, NSW) made it clear she was keen to bag herself a hat-trick, putting on a consistent performance in her opening heat. Picklum remained busy in the heat, catching a total of eight waves over the course of the heat and finished with a 12.85 two-wave total.

“It was kinda hard out there and a bit washy so I tried to go with it but I feel like I never quite found a good wave,” said Pickum. “As a Pro Junior, this is such a massive comp and it’s a huge infrastructure so it would be great to get another win here and put myself in a solid lead coming into the next leg of events.” 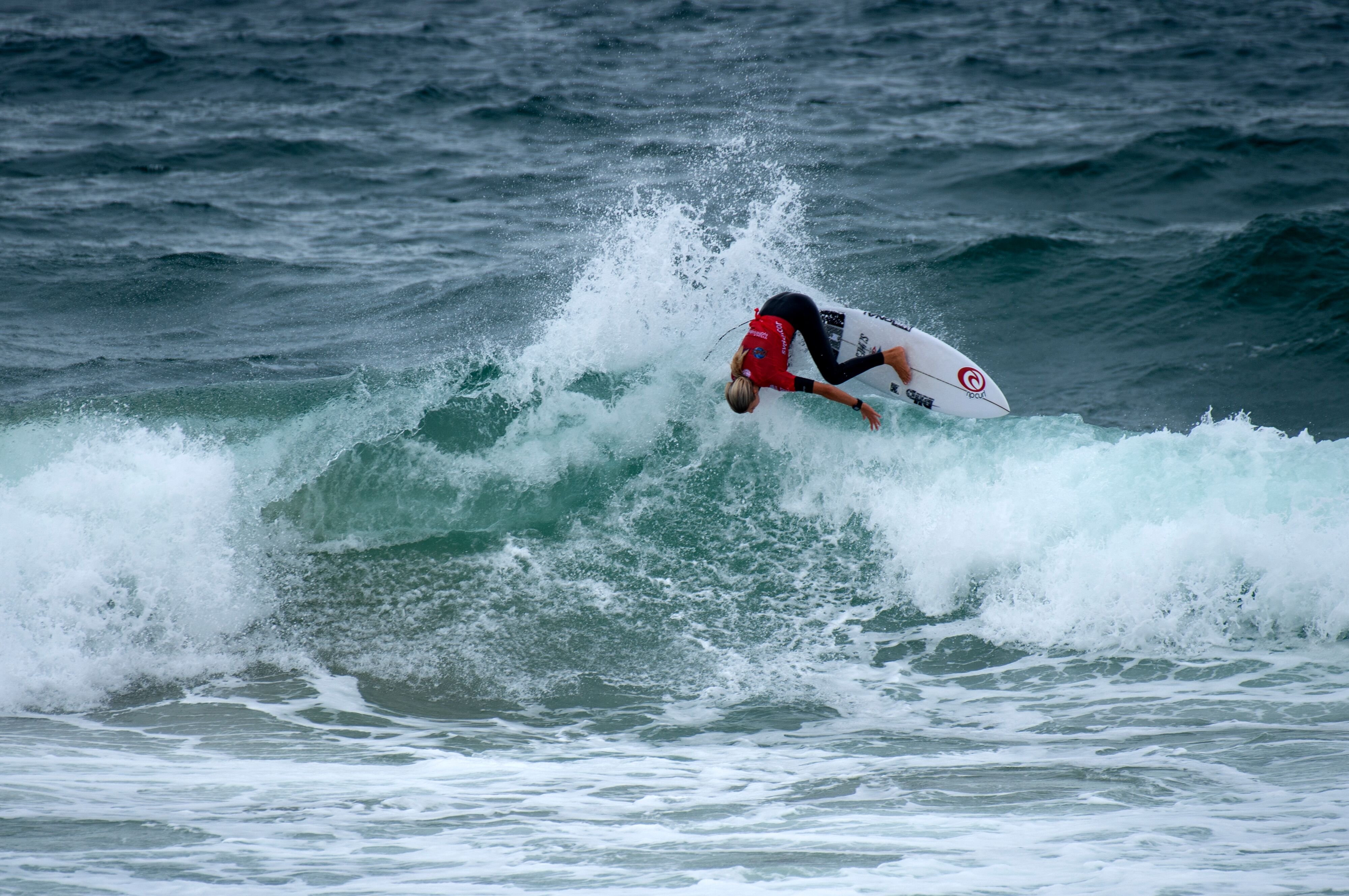 The 2019 Key Sun Zinke Sydney Pro Junior will serve as the opener to the 2019 Vissla Sydney Surf Pro.

Alister Reginato (Sunshine Coast, Qld) put the icing on the cake on what has been a stellar beginning to 2019, taking out the Boys division. Reginato surfed well beyond his years in the stacked final posting two excellent scores to amass a mammoth 17.35 two-wave heat total. Having only just started doing Pro Juniors two years back – and finishing runner up in his maiden appearance – this result will now firmly cement Reginato’s position in the top three of the Australia / Oceania WSL Men’s Junior Tour Rankings.

“I’m so stoked to have won this, it’s my first win in quite a while,” said Reginato. “This result gives me a heap of confidence as I head into a really busy year of QS events and Pro Juniors. Hopefully, I can get a couple more results over the next run of events and finish strong.” 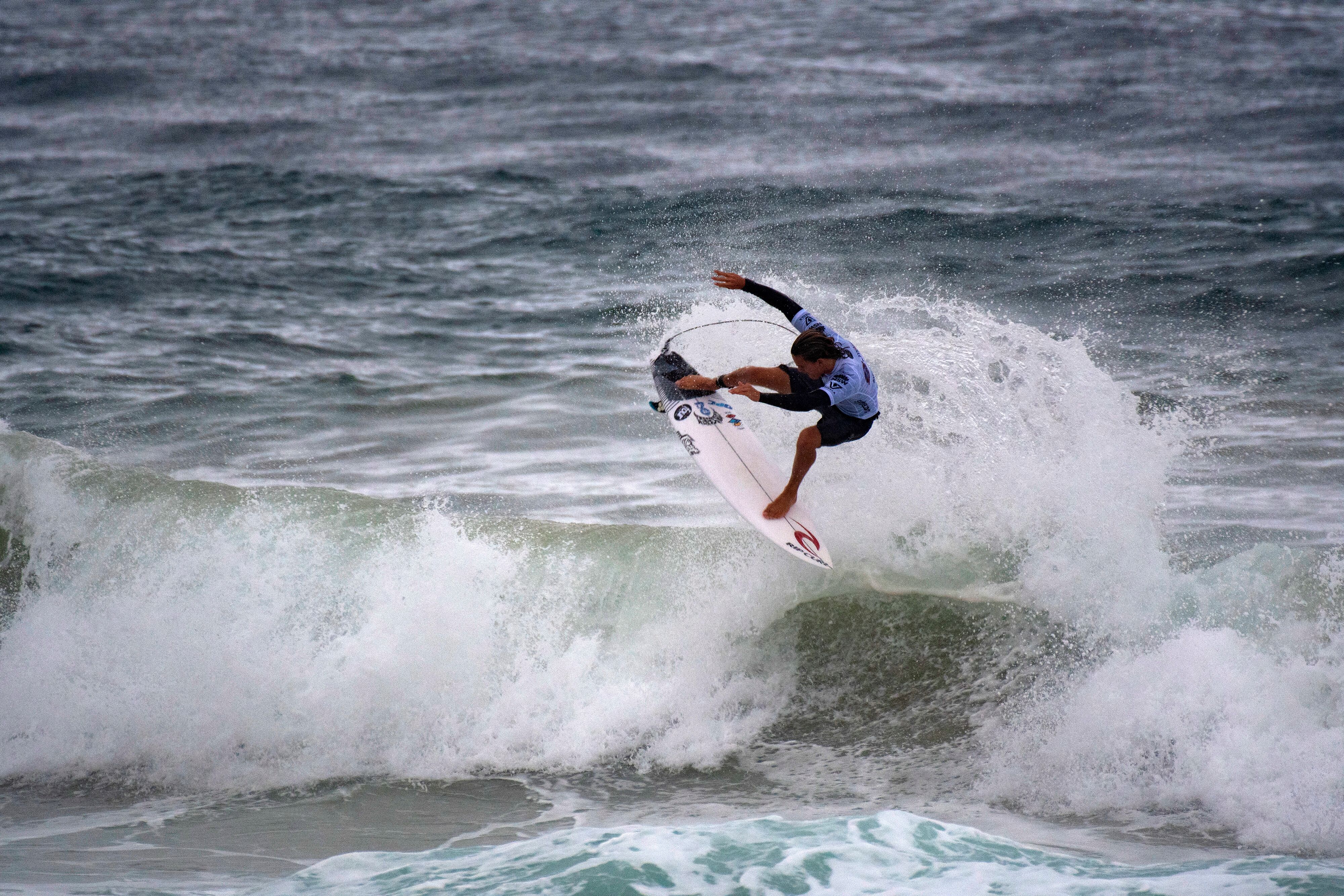 After years of wowing the world with his exciting freesurfing, Dakoda Walters (Angourie, NSW) locked in one of the best results of his junior life, taking the runner-up spot. Walters linked together a chain of innovative carves, wafts and snaps to shoot past Lennox Chell (Avoca, NSW) and Kyllian Guerin (France) and nab the runner-up position with a decent 15.60 two-wave heat total.

“The waves really turned on in that final which I think allowed everyone to do some pretty awesome surfing,” said Walters. “I was pretty happy with the way I surfed in this event, so hopefully I can keep the roll going into the next few junior competitions and QS events.” 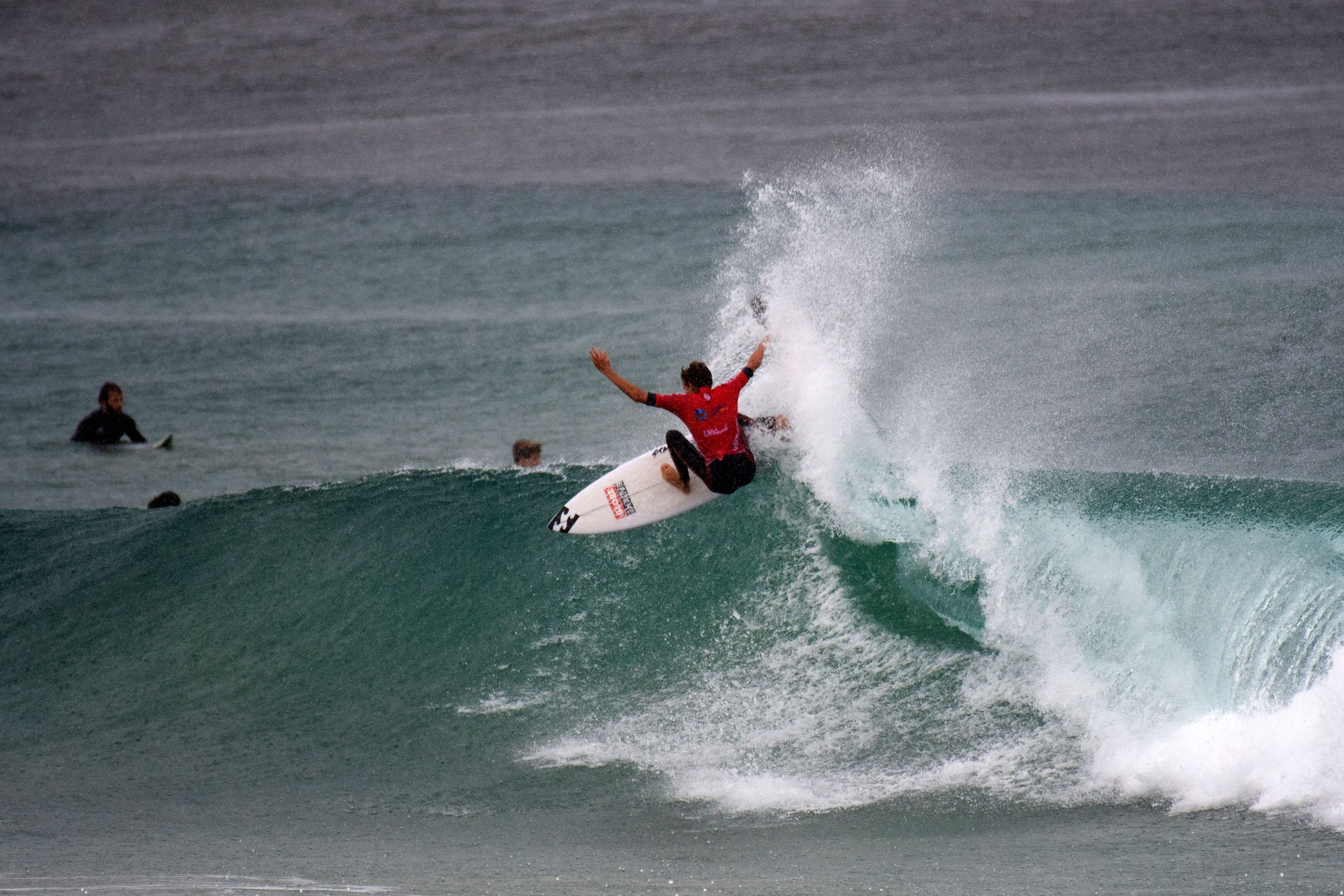 International competitor Keala Tomoda-Bannert (Hawaii) came into the Key Sun Zinke Sydney Pro Junior wanting to build confidence and momentum for the upcoming Sydney Surf Pro pres. by Sisstrevolution WSL QS6000 rated event. Tomoda-Bannert was one of the most consistent performers over the duration of the event, regularly posting scores in the excellent range, especially in the final where she finished the heat with a solid 15.40 two-wave total.

“I haven’t been doing too well in the QS events in Australia, so to take a win in the Pro Junior definitely feels good,” said Tomoda-Bannert. “All the girls in the final have been ripping over the course of the event, so to get a win over them is a great confidence boost. The waves were really fun for that heat, so hopefully they continue through the QS event.” 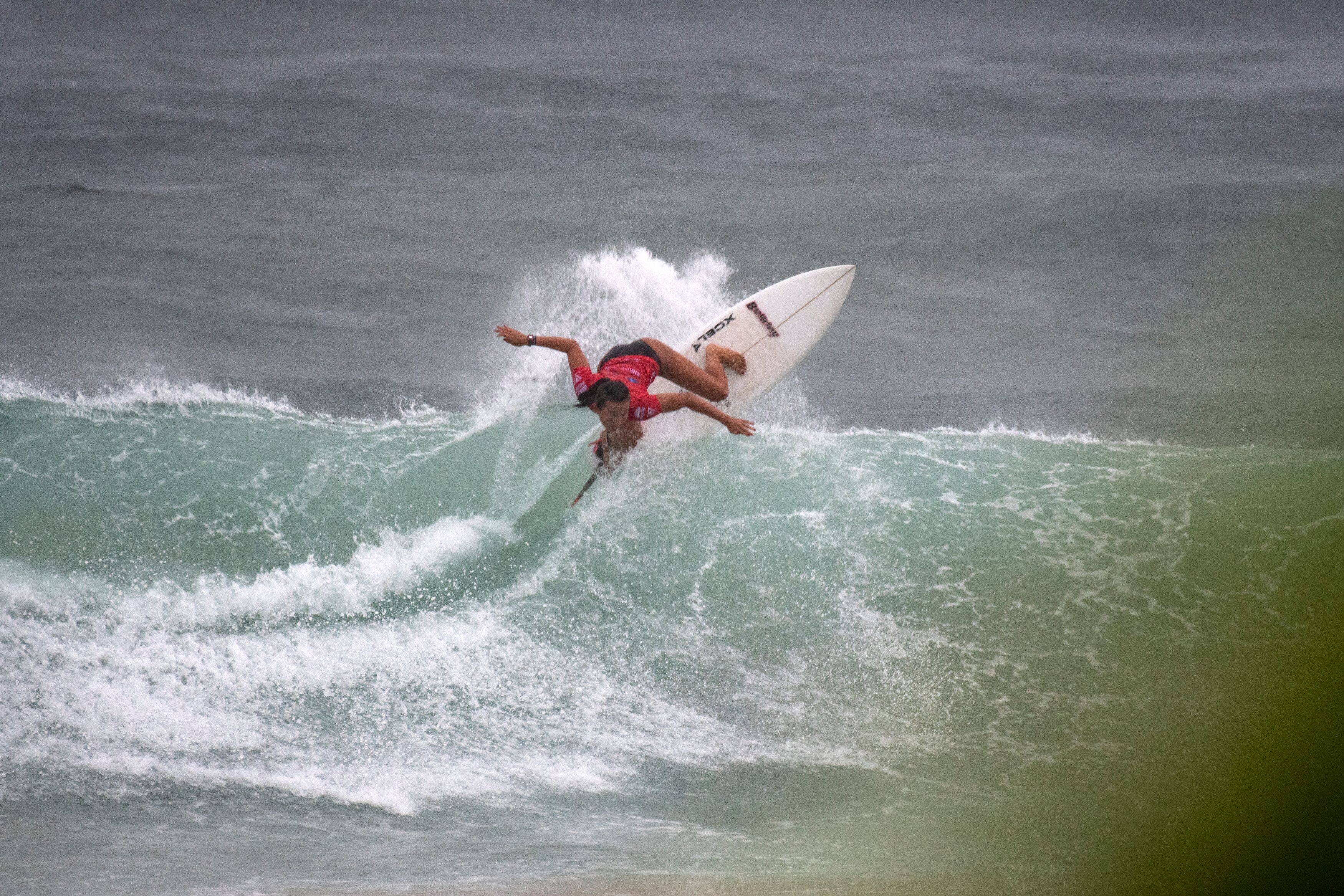 Northern Beaches native Cedar Leigh-Jones (Avalon, NSW) claimed the best result of her junior career, finishing in second position. The natural-footer performed an eclectic mix of turns and snaps to put on a valiant fight which she maintained until the dying moments of the final, however when the final hooter sounded Leigh-Jones had to settle for the runner-up position with a 13.70 two-wave total.

“It’s great to be in the final with all those girls, as they all surf so well,” said Leigh-Jones. “I feel like I’ve been getting through heats, but I haven’t been surfing as well as I could, so it was good to get a final with really good waves and put on a performance I was proud of.” 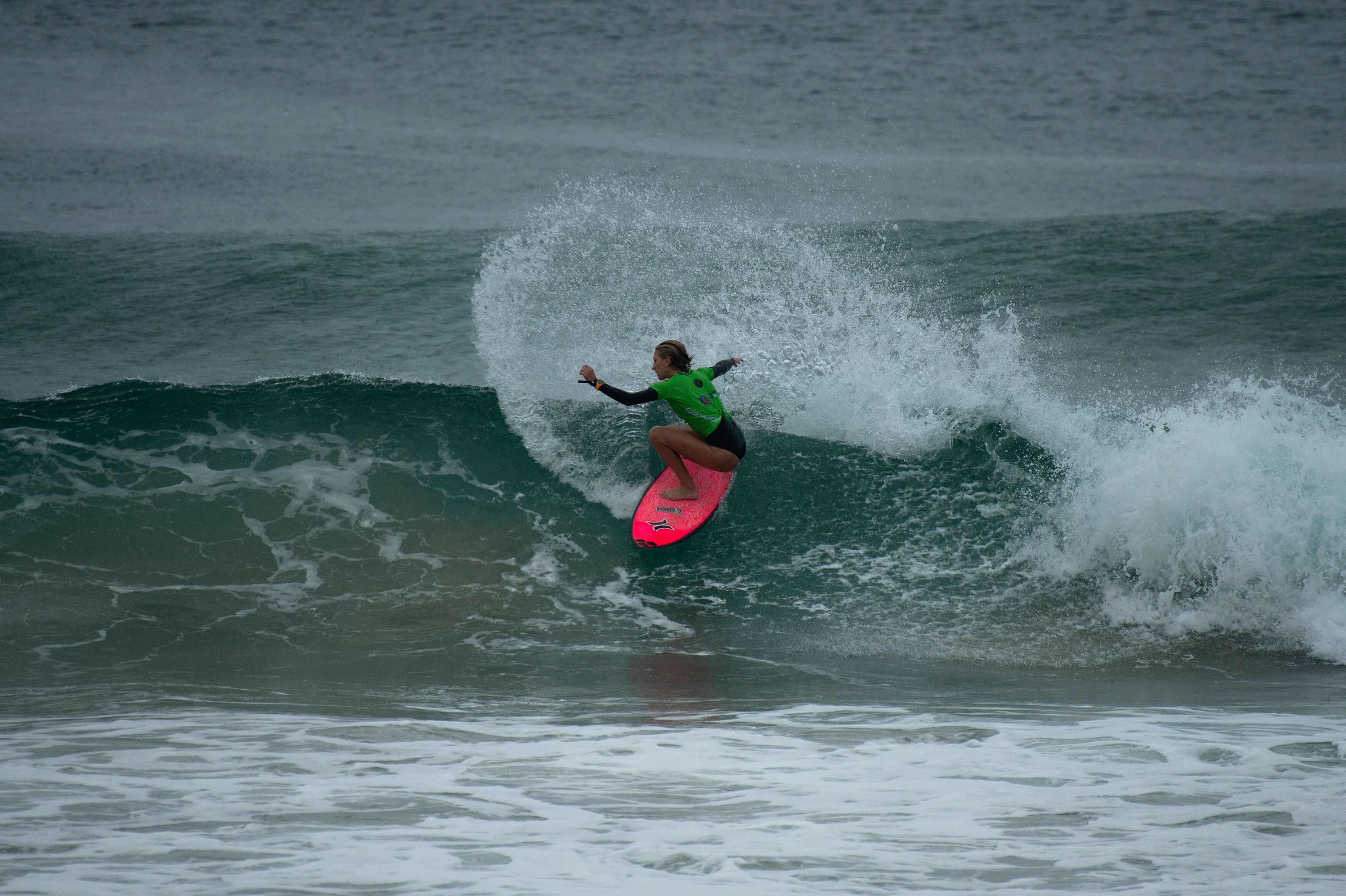 North Narrabeen Sports High claimed a clean-sweep of victories across the Boys and Girls divisions of the Lifeline High School Challenge. Both divisions posted a series of giant scores in the 45-minute tag-team heats to claim the wins convincingly.

For more information and highlights, check out sydneysurfpro.com. The live broadcast will be available on worldsurfleague.com 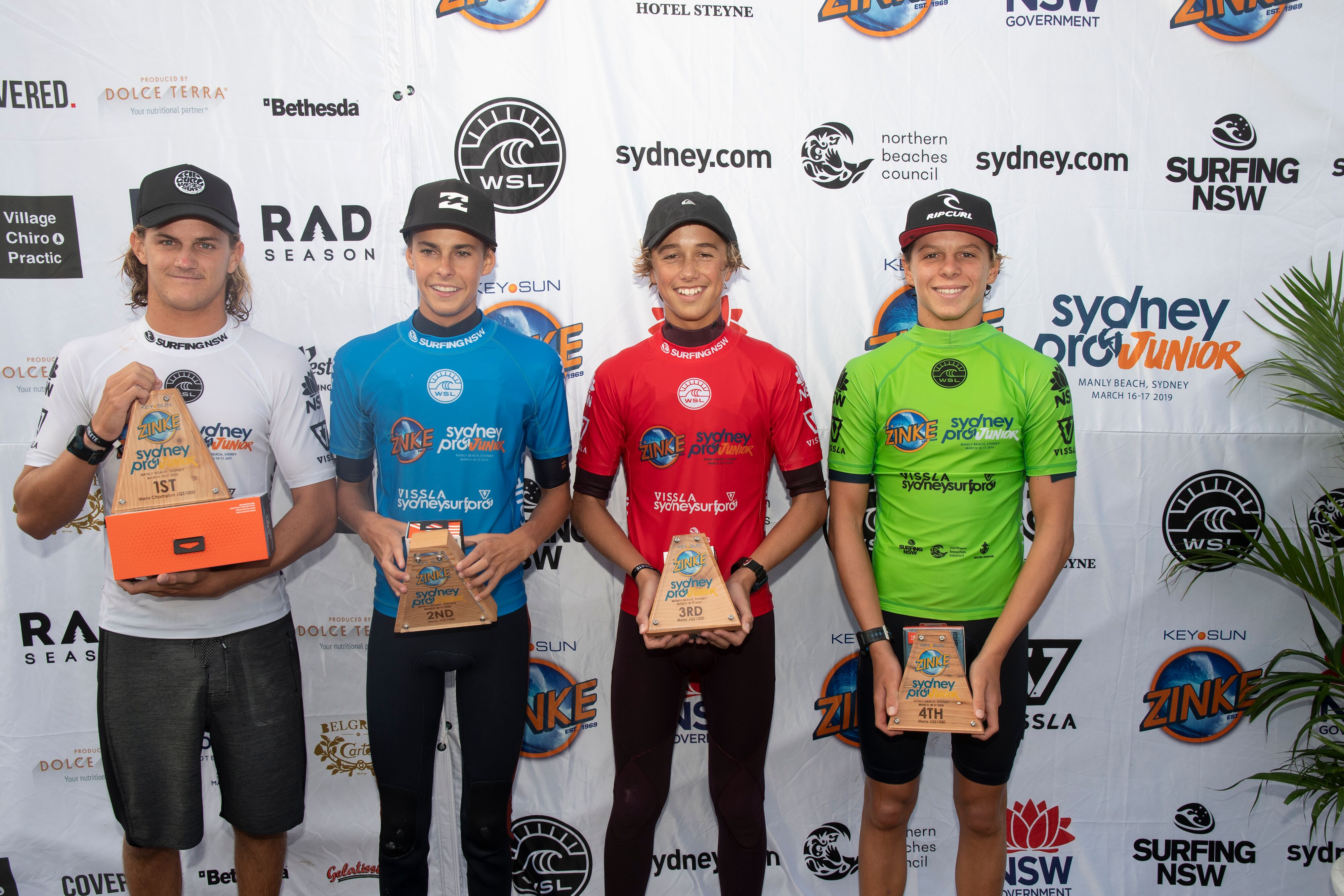 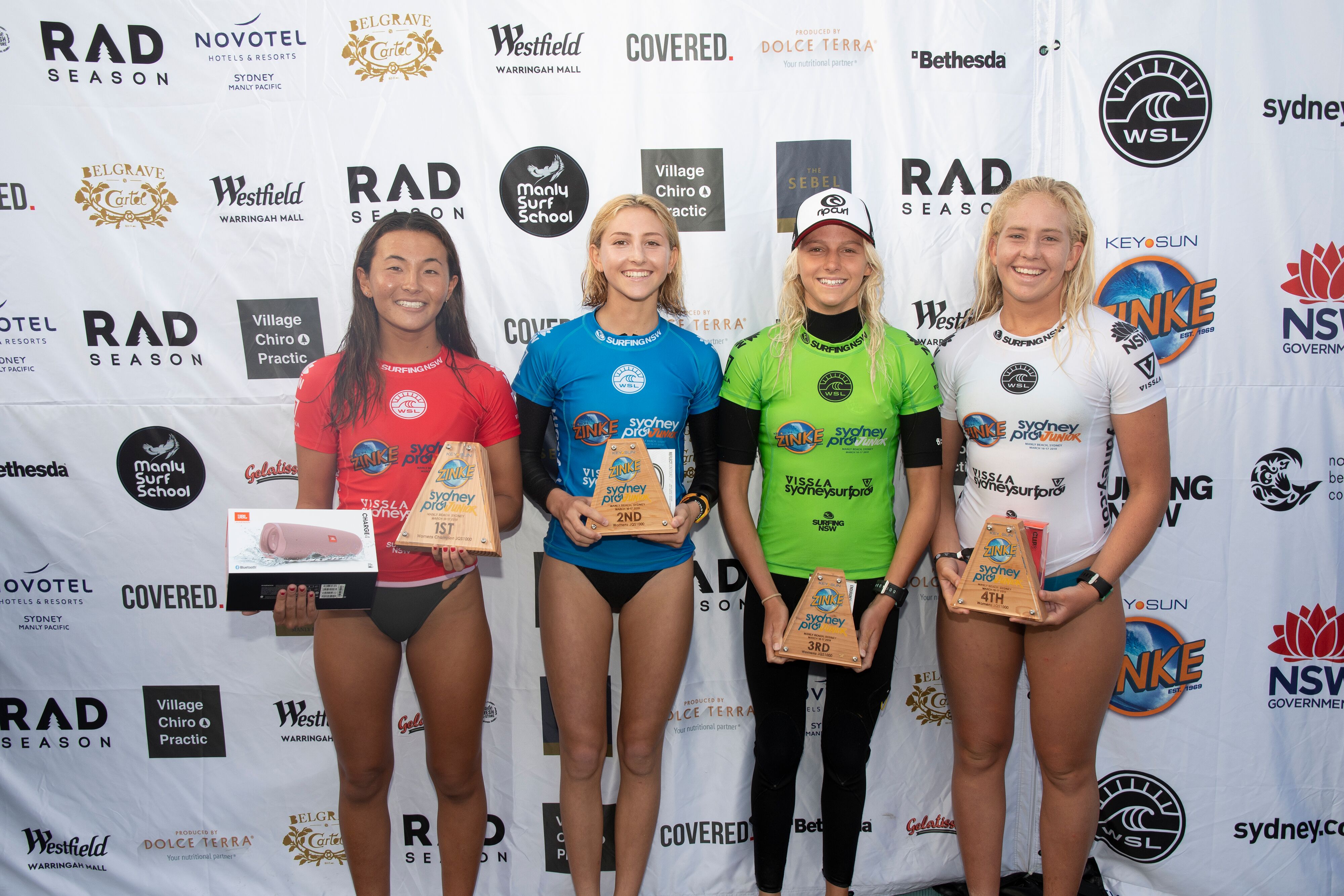 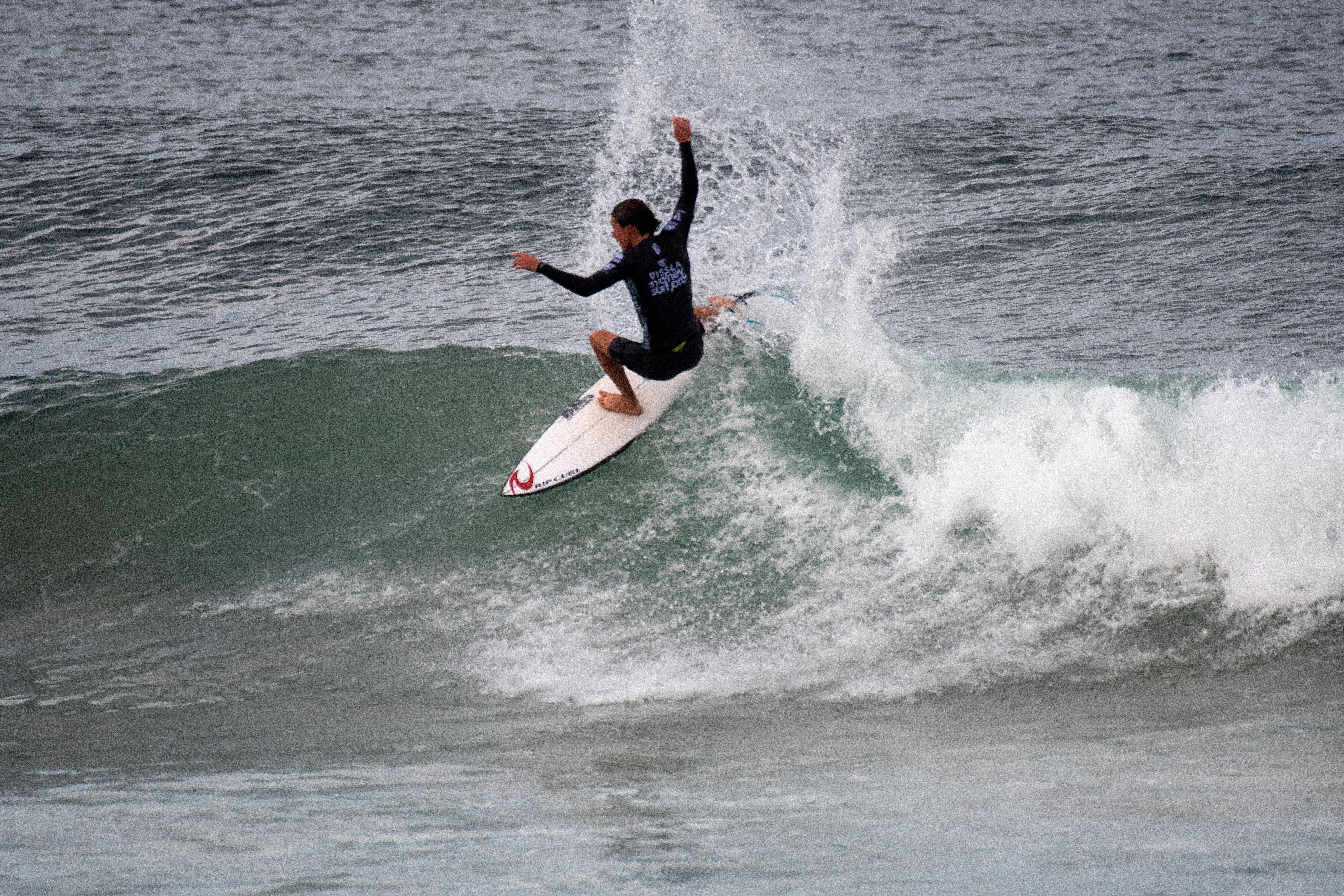 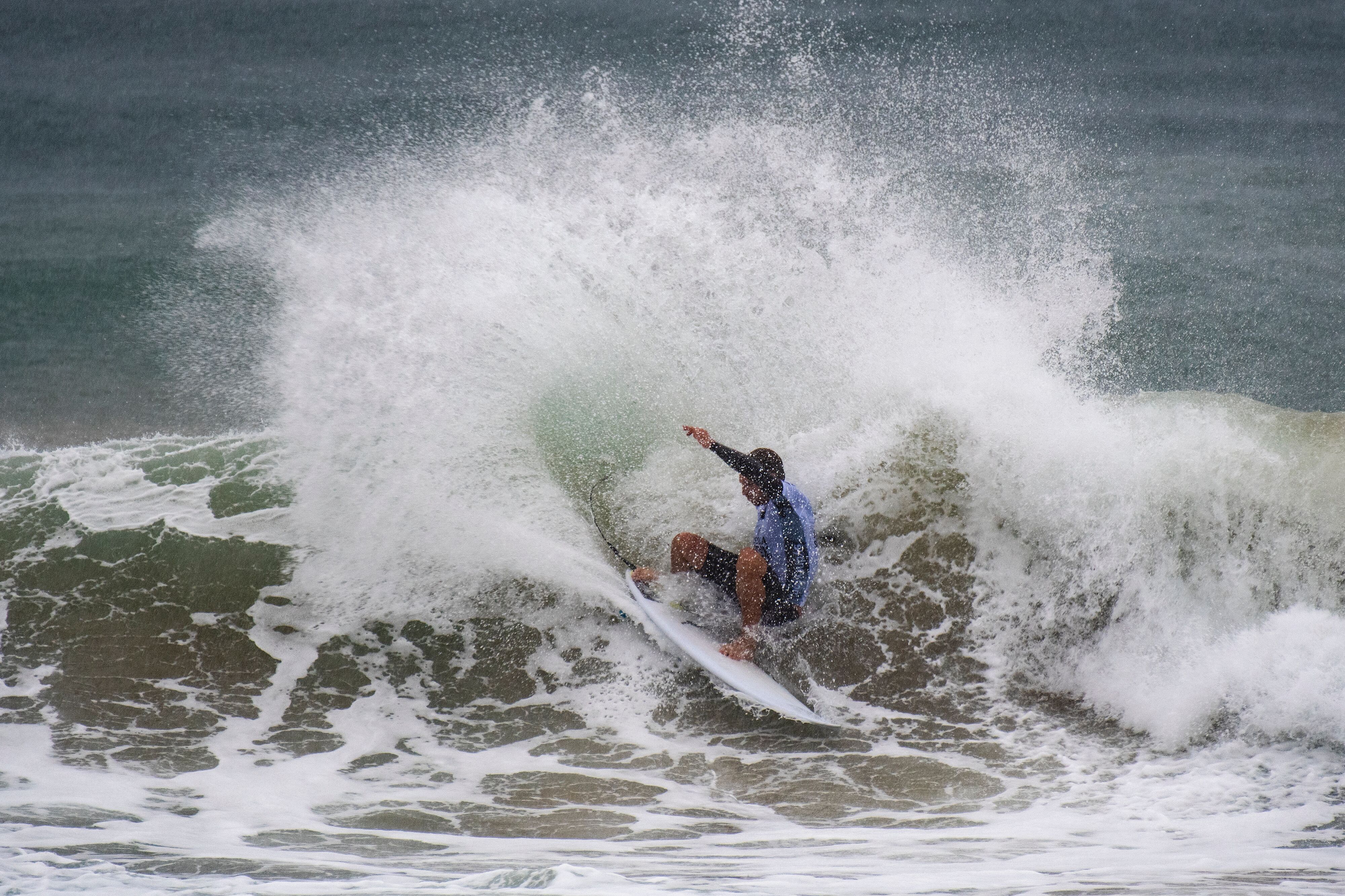 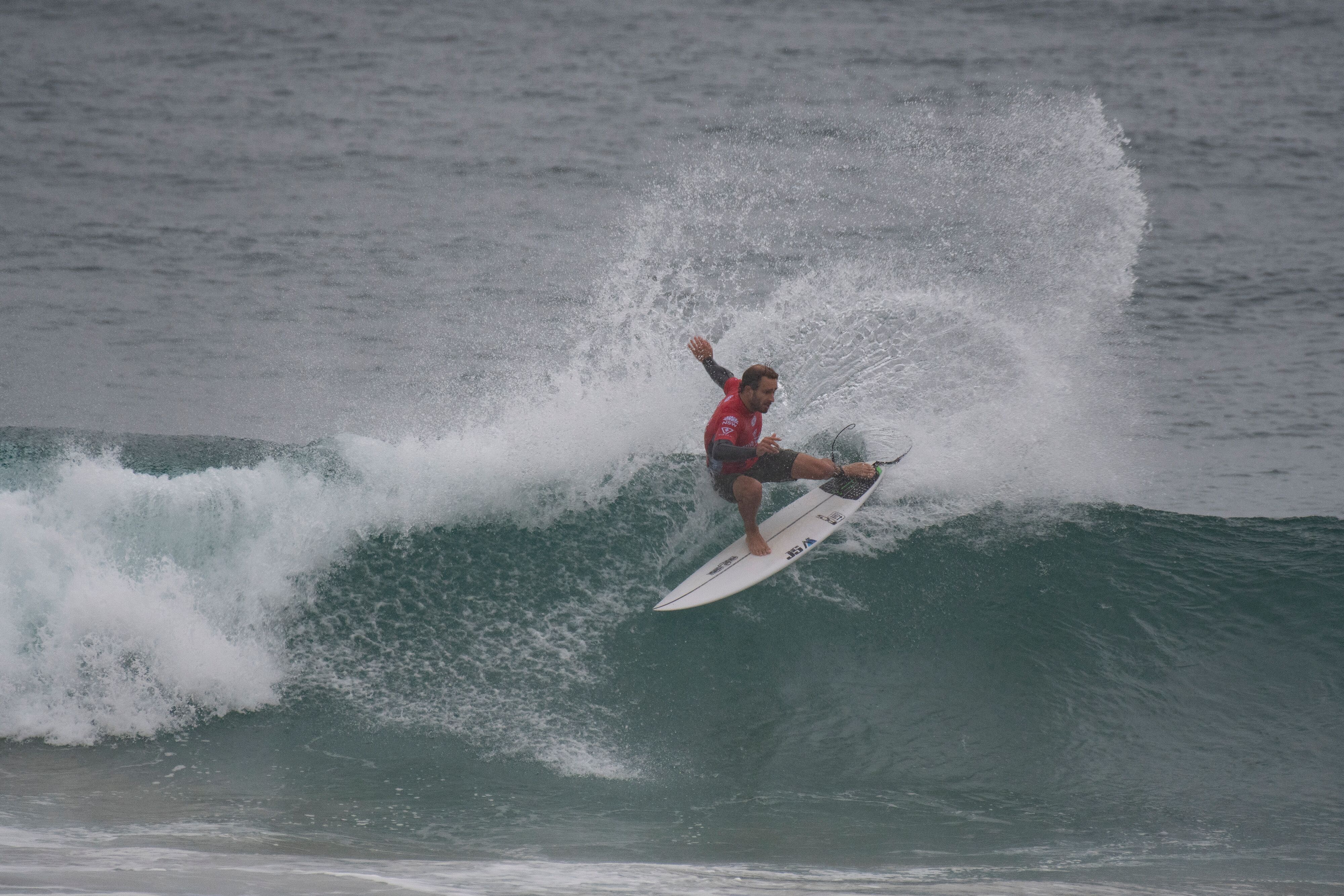 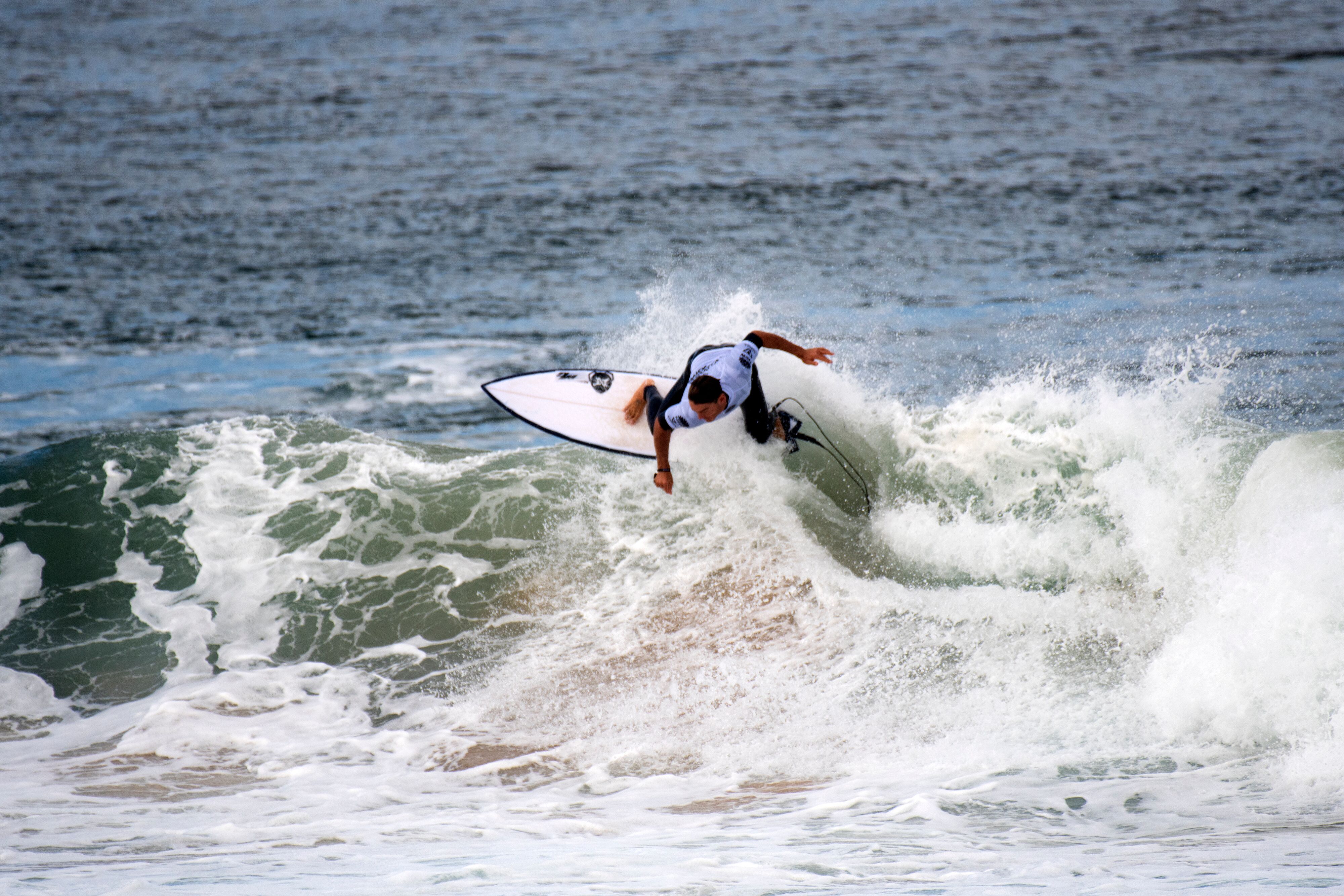 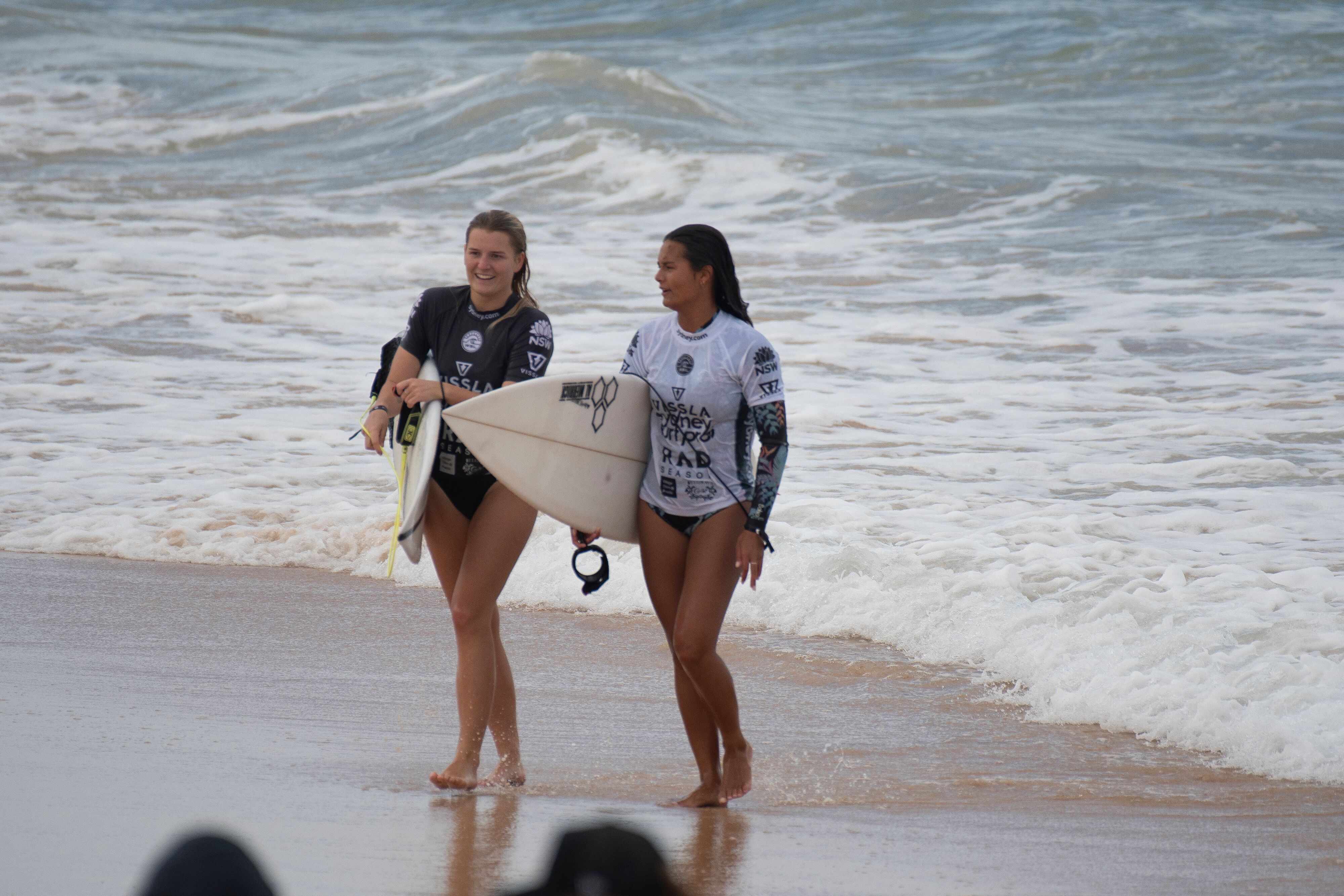 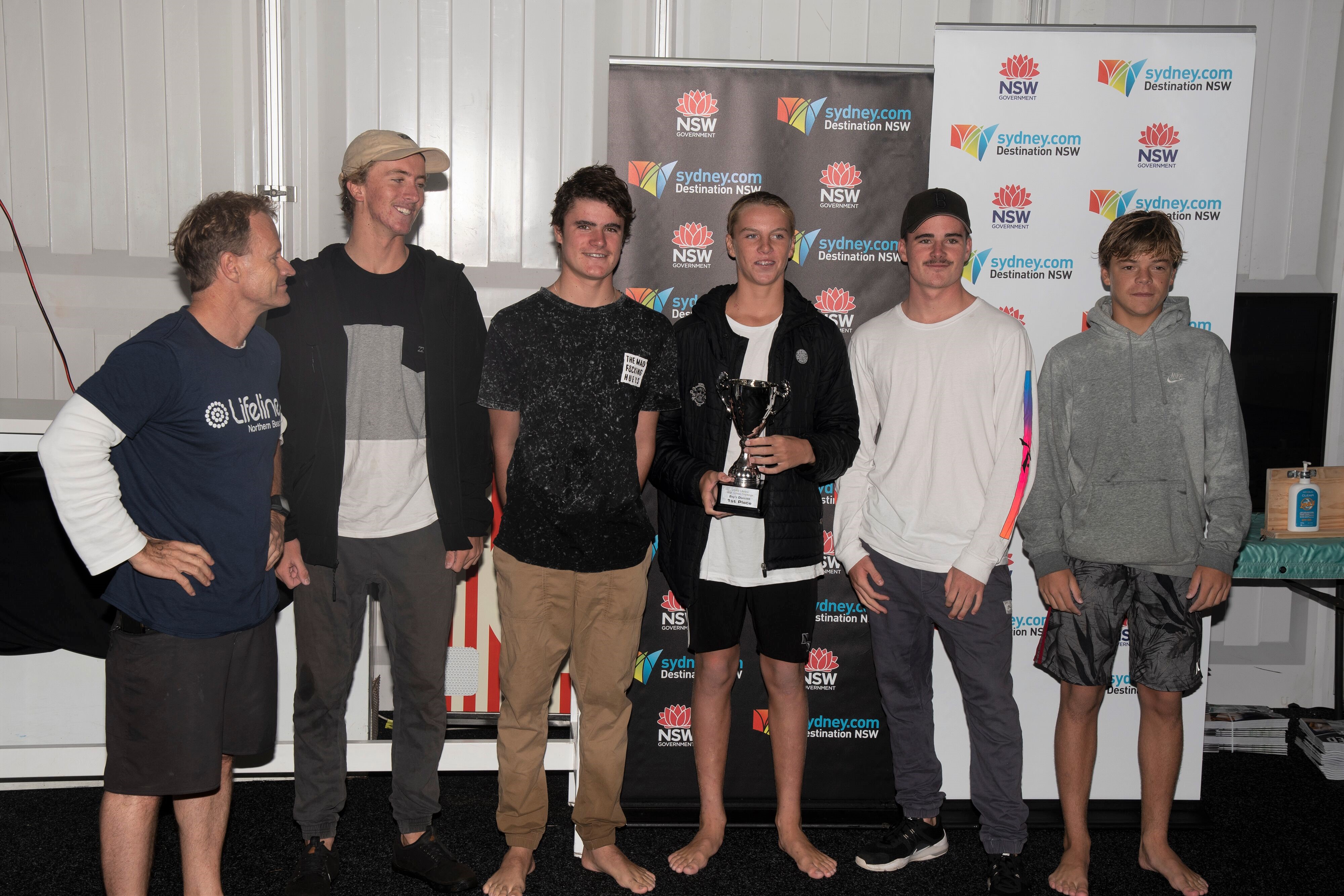 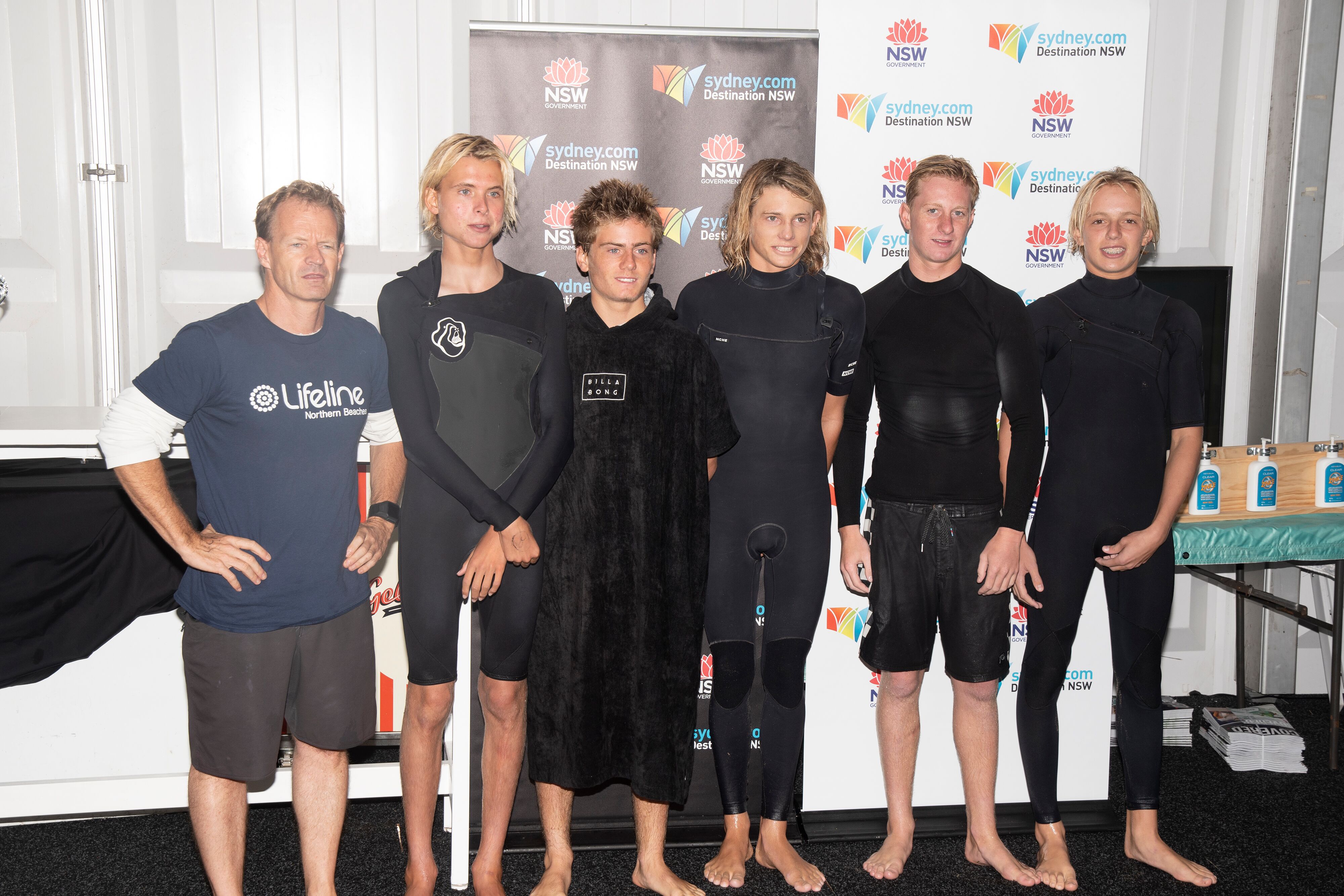 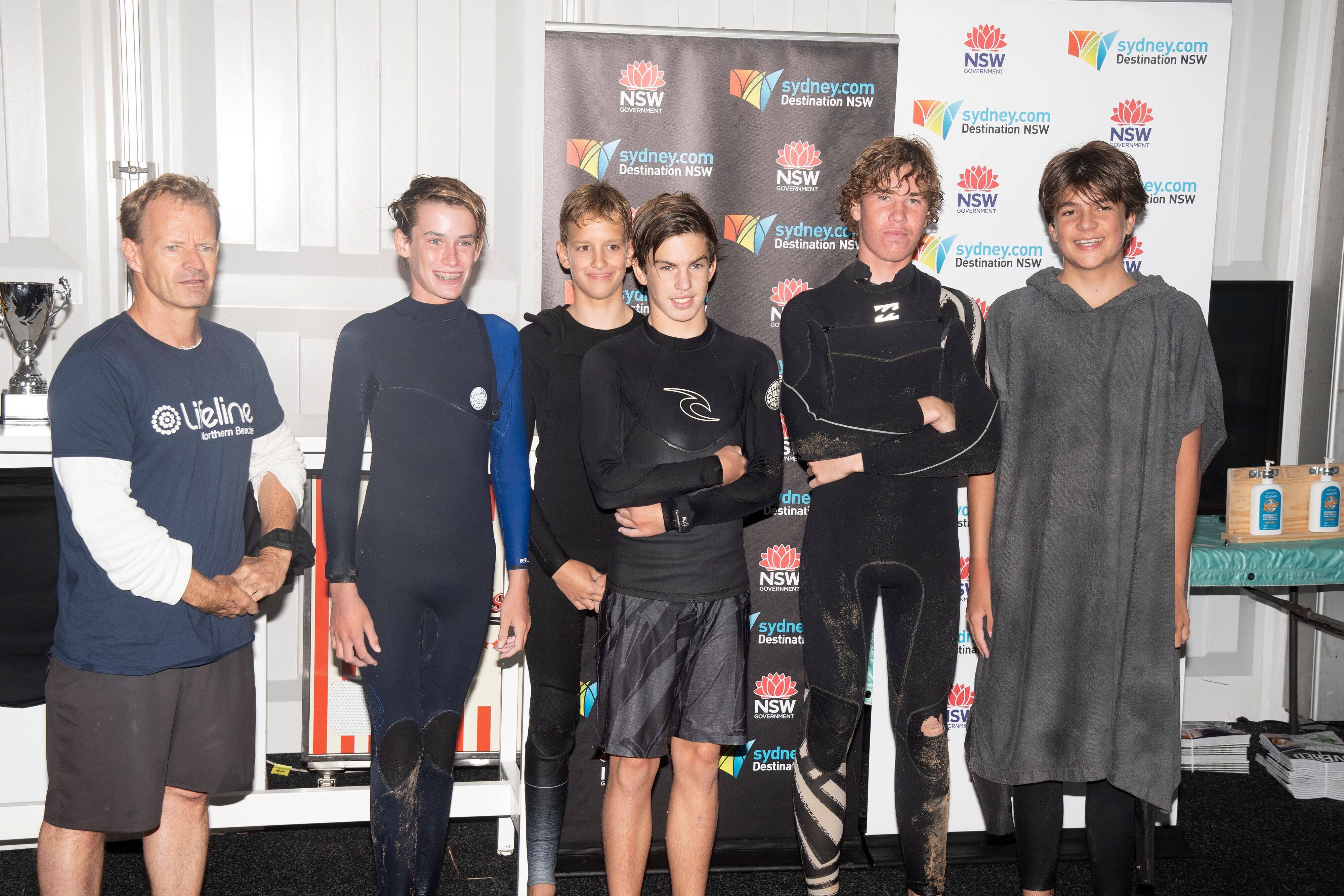 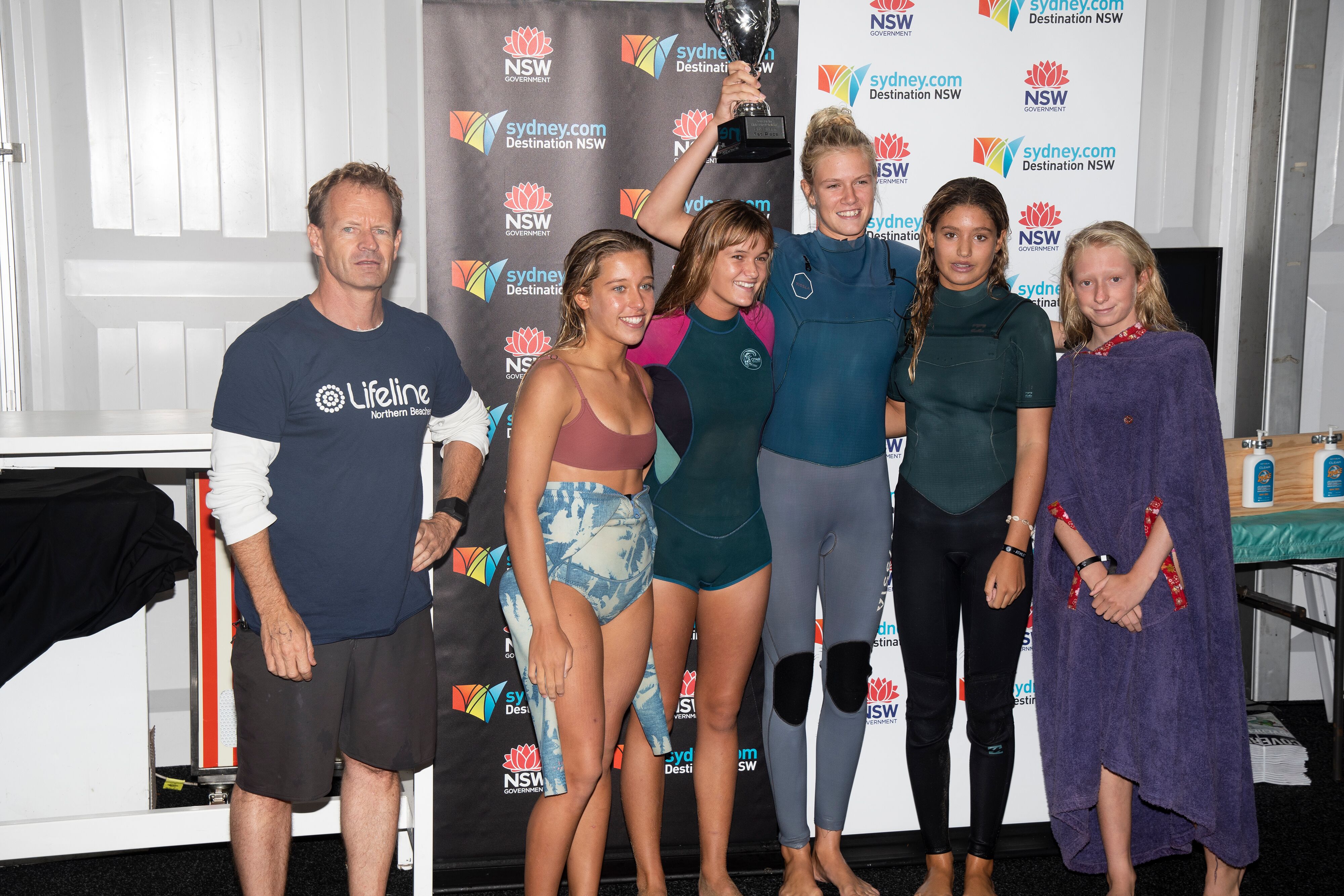 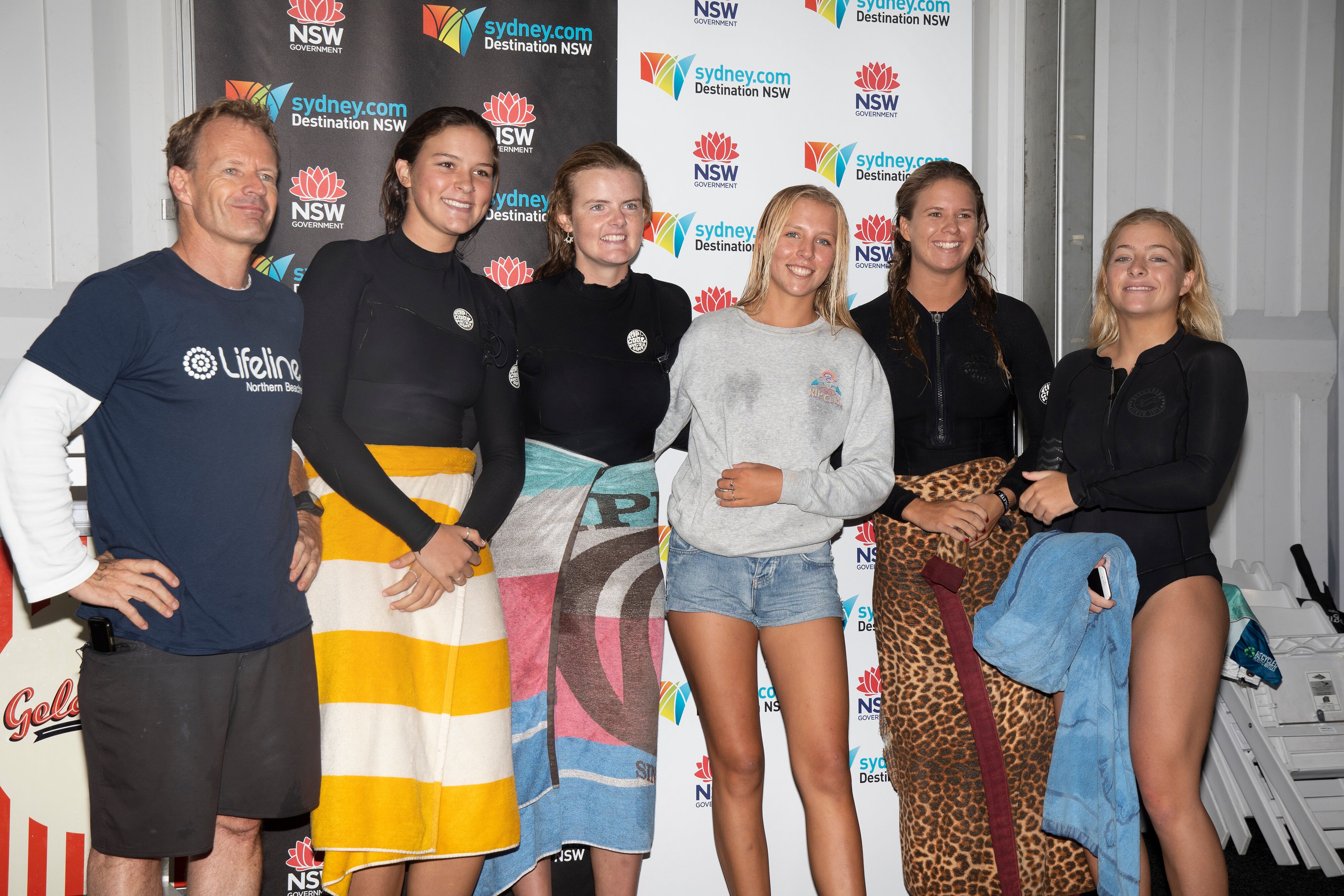 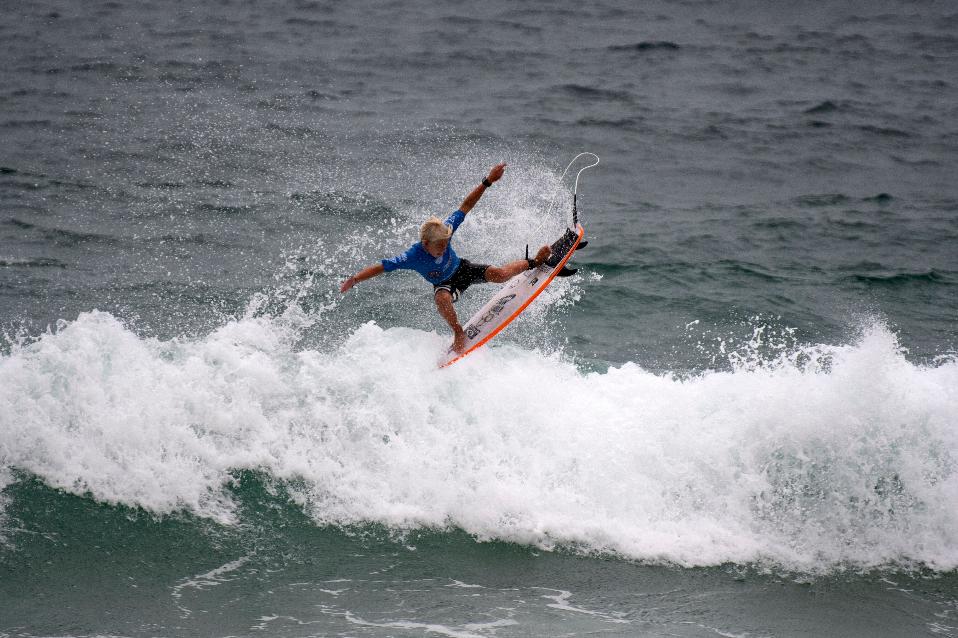 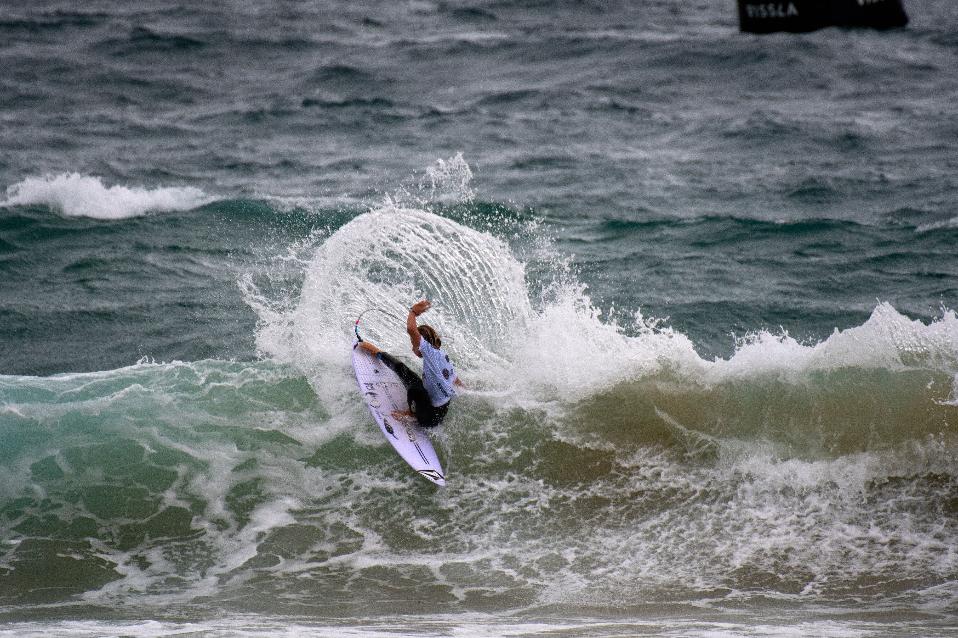