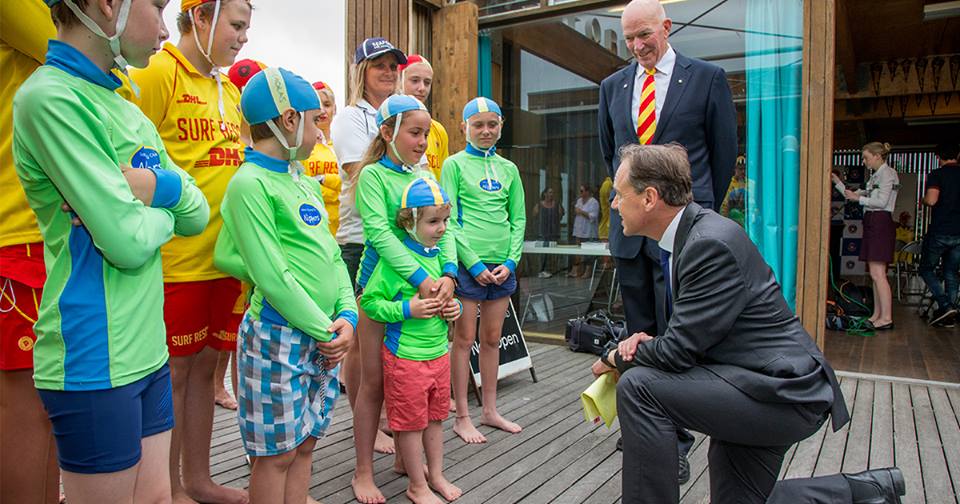 The Hon. Greg Hunt MP and Graham Ford AM speak to some surf lifesavers and nippers from Seaford LSC at the 2017 National Coastal Safety Report launch. Photo courtesy SLSA

The report was launched at Seaford Life Saving Club by the Honorable Greg Hunt, Minister for Health and Sport and highlights many significant factors around coastal drowning deaths.

With recent tragic events involving children and teenagers in New South Wales (missing 11 year old, Lighthouse beach) and South Australia (drowning death of a 15 year old girl from India at Glenelg beach), SLSA wants all to be water safety conscious as we lead into the Christmas holiday period.
While the 116 coastal drowning deaths is a nine per cent reduction on the previous year, it is the third highest number of fatalities recorded in the past 13 years.

Of these coastal drowning deaths, men are over-represented at 83 percent of the recorded fatalities.

Swimming/wading is the most common activity preceding a drowning death (28%, n=32), and with a corresponding increase in swimming/wading participation at coastal locations by (4% to 10.1 million in 2017).

Graham Ford AM, President of Surf Life Saving Australia said: “Today we heard about 116 coastal drowning deaths due to the unpredictability of our oceans. These aren’t just numbers, it’s 116 lives, it’s someone’s mother, father, brother, sister, child or friend who didn’t return home from the beach.”
“These findings show that there is still work to be done in driving a national agenda on water safety education, and in promoting safe practises such as swimming between the red and yellow flags and wearing a life jacket. With government, community, business and water safety agencies working together, we can make a difference,” he said.

“We are imploring all Australians to take extra care when undertaking water related activities on our coastlines.”

“The need for increased education and behavioural programs for all beachgoers remains of critical importance in light of the reports findings,” said Minister Hunt.

“We are fully committed to working with Surf Life Saving Australia to achieve their vision of zero preventable deaths in Australian waters. A day at the beach or on the water should be a happy memory and not one of tragedy so it is vital to heed the advice and warnings issued by Surf Life Saving.”

Surf Life Saving Australia is asking the public to take precautions when recreating in coastal areas this summer:
• Where possible swim at a patrolled beach between the red and yellow flags
• Obey the safety signs at the beach
• Learn how to identify a rip current and look for rip currents before deciding where to swim
• If you’re not sure, ask a lifesaver about the beach conditions
• Wear a lifejacket while boating, rock fishing or paddling
• Don’t go into or on the ocean during severe weather warnings
• Take personal responsibility, think twice and assess your safety and ability before entering the water
• Supervise children at all times in and around water.

It’s a timely reminder for swimmers of all abilities to still be cautious when undertaking any water activities this summer.

One death is too many and the number of Australians and visitors who die from drowning each year is simply not acceptable.

Only 28 per cent of people who drowned were swimming or wading at the beach. This figure could have been much higher, as life savers rescued almost 11,000 people at beaches with flags and patrols last year.

Other activities in the surf or sea claimed the most lives – boating, jet skiing, snorkelling, rock fishing, and scuba diving, which cannot be supervised by lifesavers.

People need to be more diligent with simple safety precautions such as swimming at a patrolled beach between the red and yellow flags, and wearing a lifejacket while boating, rock fishing or paddling.

Have a swim at the beach or pool is a great Aussie tradition but we need to take care.

That’s why earlier this year, I asked for a review of the Australian Water Safety Sector to see if we could do more to keep people safe in the water.

I have now received that review, and it’s confirmed that the overall direction of the Australian Water Safety Strategy is sound.

The review recommended multiyear agreements and that we consolidate the programs, reducing the administrative burden. We support the recommendations and will be now looking to implement them.

If you are heading to the water this summer, for swimming, fishing or any other activity, please know your own ability. Listen to your local surf life saver and heed warnings, take care and be safe.