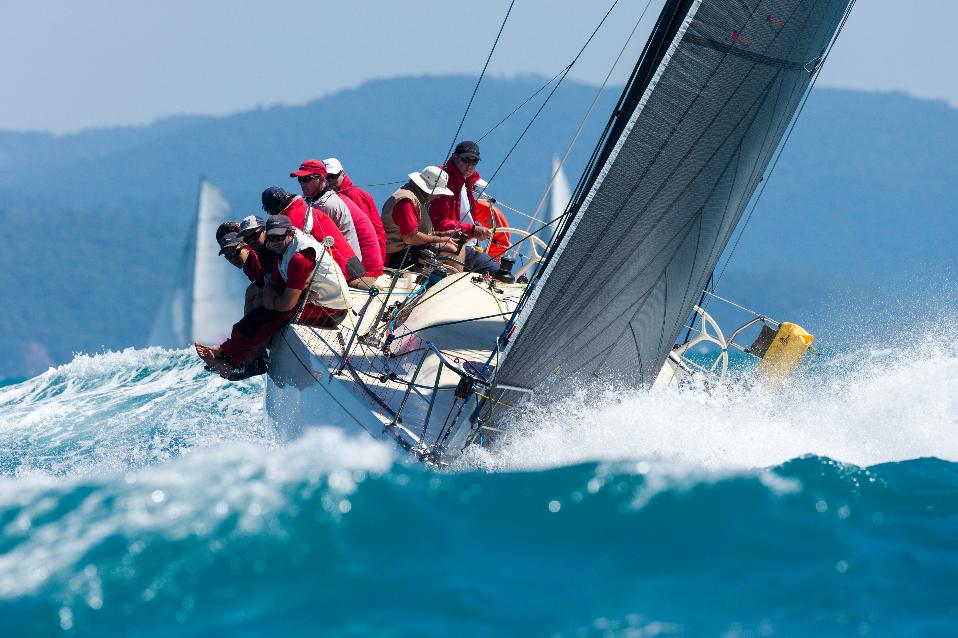 If early indications are anything to go by, Hamilton Island Race Week 2019 could already be on course for a record fleet when it is staged on the beautiful, island-laced tropical waters of the Whitsunday Passage from August 17-24.

Entries have been open for little more than a month for the 36th edition of the award-winning series, yet there is already an unprecedented level of interest from yacht owners. Near 70 entries have been lodged, and the number is growing by the day.

“Right now the rate at which the entries are coming in matches that of 2016 when we had a record fleet of 252 yachts,” said Race Week’s race director Denis Thompson. “What is even more encouraging this year is the fact that one-third of the entries received have come from owners who have not previously participated in the regatta. Certainly it is way too early to speculate on the fleet size for this year, but what we are seeing is promising.”

The cross-section of entries is spread across all divisions; even trailables where owners in Tasmania and Canberra have registered early.

The most enthusiastic competitor of all to date is offshore racing enthusiast, Wayne Millar, with his 41ft sloop, Zoe. Originally from Townsville and now Lennox Head in northern NSW, Millar has missed only three Race Weeks since 1991. “It’s the best regatta on the planet. There is nothing to compare with it,” an always energetic Millar said. “The big changes have come since the Oatley family took over ownership of the Island. They are great yachties, so they know how to make every part of the regatta work. The parties are as good as the sailing.”

Millar’s worst memory of Race Week came in the mid-1990s when a 150 nautical mile overnight race was the signature event for the Grand Prix level yachts: “The breeze died in the early evening just as we were approaching the finishing line,” he said. “We could see and hear the party happening in the tavern onshore and wanted to be there, but the tide got hold of us and we drifted past the party four times while we tried to get to the line. Worse still, by the time we finished and got ashore it was early morning and the bar was closed. Needless to say, we think that one of the best changes made to the regatta schedule has been to cancel the overnight race.”

Apart from the excitement of racing on courses that take the fleet around the myriad of islands in the Whitsundays, the scheduled Lay Day mid-week provides the crews and their families and friends with the opportunity kick up the heels at the big Summer Bright Pool Party or enjoy fine dining and champagne at the Charles Heidsieck Luncheon at qualia, the island’s six star resort. Or there are options to play a round of golf on the superbly scenic 18-hole course, do a day-cruise around the islands, or simply relax and watch the sunset from the Bommie Deck at Hamilton Island Yacht Club.

Special accommodation packages are available now and options include 3 to 6 star hotels as well as a range of self-catering holiday homes, which are a great option for crews. Book at https://www.hamiltonisland.com.au/sports-events/hamilton-island-race-week/hot-deals and get your pick of the houses available over these popular dates.

Hamilton Island Race Week has an impressive history. It was established following Australia’s historic victory in the America’s Cup in Newport, Rhode Island, in 1983. The inaugural regatta, staged in April 1984, attracted an outstanding fleet of 92 yachts which came from all points across Australia, including Perth.

The Notice of Race and all details relating to Hamilton Island Race Week 2019 are on the website https://www.hamiltonislandraceweek.com.au