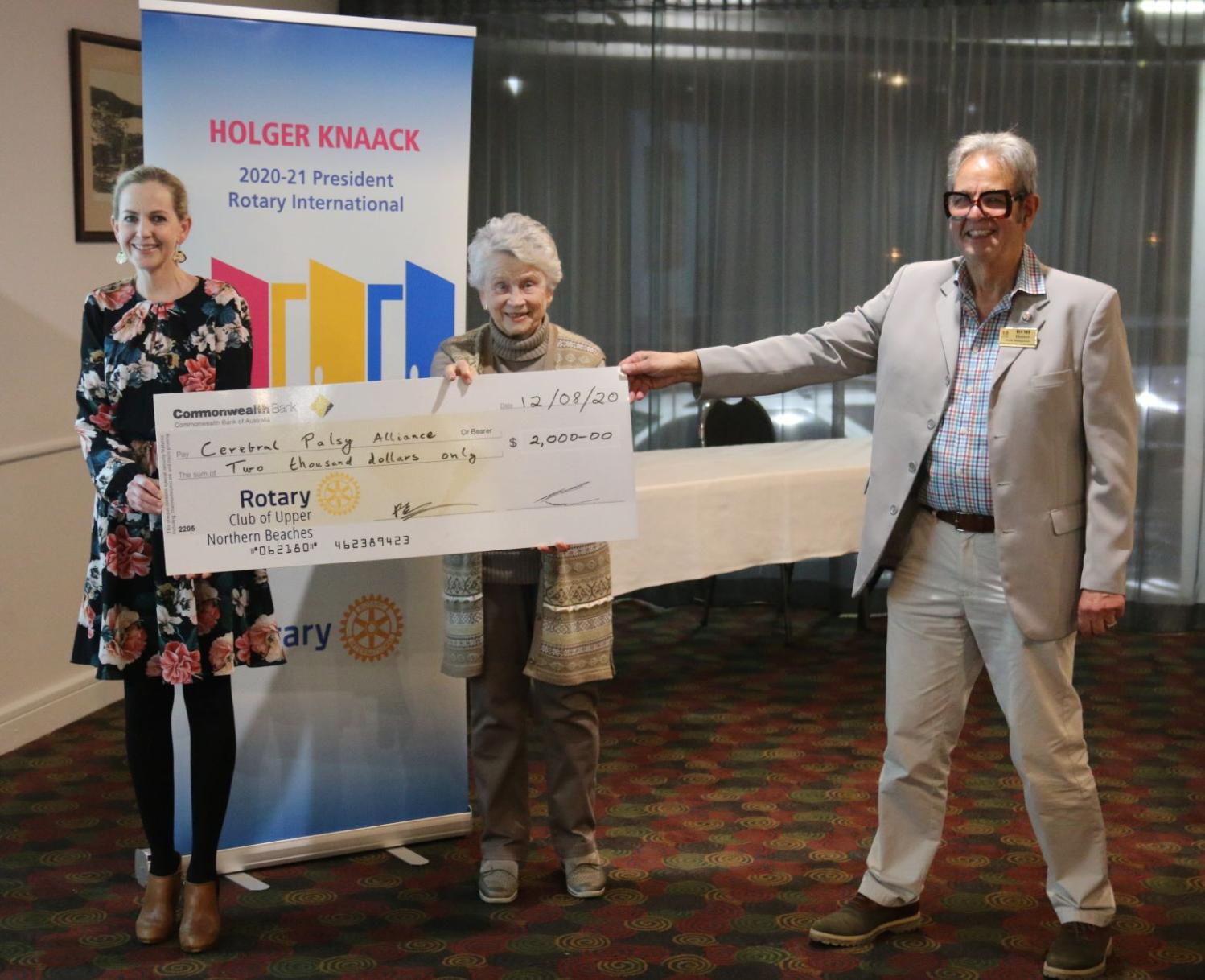 On Wednesday, August 12th, the Rotary Club of Upper Northern Beaches (UNB) was pleased to invite Lorraine McNuff, a senior manager from the Cerebral Palsy Alliance (CPA), to address the club and to acknowledge a donation to CPA from the Club.

Lorraine gave a brief history of the Cerebral Palsy Alliance, previously known as “The Spastic Centre”. Founded by Audrie and Neil McLeod, for whom ‘Nothing Is Impossible’, on January 30th 1945, with a capital of ₤32, 14 children and 25 parents, were given the use of a house at Queen Street Mosman on loan from Arthur Sullivan, and two motor vehicles from the Mosman National Emergency Service, The Spastic Centre commenced operations.

Supported by dedicated parents and loyal staff, Audrie McLeod was able to obtain financial assistance from governments, introduce innovative methods of fundraising and rally assistance from the corporate sector and the general public to build the new buildings that The Centre would need.
In 1954, the Australian Cerebral Palsy Association was formed. Mrs. McLeod became the first President and was the NSW delegate to the International Cerebral Palsy Association. Mrs. McLeod hosted many visits from overseas organisations and dignitaries who were keen to learn from The Spastic Centre model of a parent-inspired and managed organisation.
As the demand for placements at Mosman increased, a new school was built and later extended. It also became evident that, as the children grew older and reached school leaving age, further facilities and services were needed. A large parcel of crown land was obtained at Allambie Heights on which one, and then a second supported accommodation hostel was built and a large factory offering vocational training and employment was also constructed as well as a medical treatment and training centre.
Opened in 1957 The Country Children’s Hostel, later known as McLeod House, at Allambie Heights was a ‘home away from home’ for dozens of country children who could now access a full range of services, like their city counterparts. The much-loved nursing staff was assisted by mothers who lived in for two week periods and regarded all the children as their family.
In 1961 Centre Industries (CO) opened at Allambie Heights. This ambitious manufacturing enterprise offered training and employment for adults with cerebral palsy. It was the first commercial operation that was inclusive of people with and without a disability. Centre Industries became the model for similar projects in the USA and Japan.

It is now a large organisation, with over 2,000 staff and regional centres throughout New South Wales. Therapy services are provided for children and adults with neurological and physical disability.  Research is a very important belief of the CPA, which initiated the world first research foundation into the causes and treatment of cerebral palsy, as well as linking globally to other research programs.

The CPA welcomed the advent of the NDIS (National Disability Insurance Plan) to support its clients, but there is still a need for fundraising for services not funded by the NDIS, such as ongoing research, purchase of equipment and early detection and treatment of babies at risk of cerebral palsy.

As a result of the Covid19 virus, clients of the CPA have been unable to access face-to-face therapy, essential for prevention of long-term complications and pain relief, and have had to rely on online consultations with their therapists. A “Telepractice Appeal” was launched to raise funds to provide the necessary equipment, which included Tablets, relevant Apps and sensory toys for small children.

The Rotary Club of UNB was proud to donate $2,000 towards this very worthwhile appeal and project, which was doubled by the generous dollar match pledge of Goodman industrial property group.  The Telepractice initiative has proved so successful that select clients may be able to use this delivery of service as their preferred option, removing the need for hours of unnecessary travel and the inconvenience this may cause.

For more details of these organisations, please visit cerebralpalsy.org.au  and  www.rotaryuppernorthernbeaches.org.