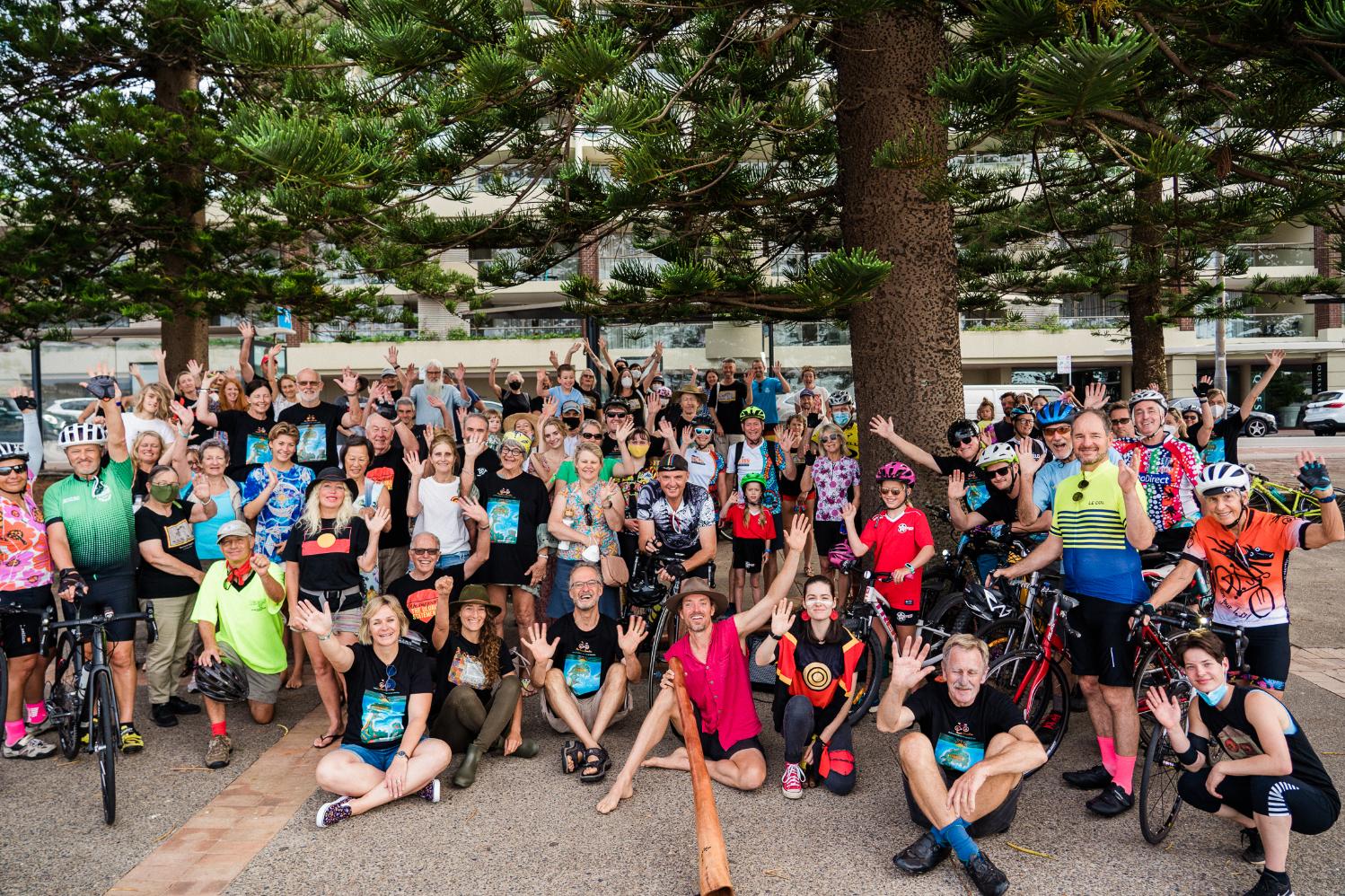 Although this is a bike ride from Manly to Church Point, those not riding often gather at either end and along the way to show their support and listen to what is said.

About 100 people gathered at the start of the ride with 25 riders sent on their way with Didgeridoo playing and to a special Aboriginal song by Aleta Wassell in Dharug language with the sounds of the didgeridoo, clap sticks and a sing along.

MP for Warringah Zali Steggall joined the crowd at Manly. The ride commences at the plaque near Manly Wharf where Wil-Le-Me-Ring, a Garigal man, speared Governor Captain Arthur Phillip, wounding him.

Ms Steggall said, ''A beautiful way to spend the morning of 26th of January, in reflection, respect and celebration of first nations culture and peoples. We had a moving ceremony before the group of cyclists set off on their ride through the Northern Beaches up to Church Point. Thank you to the organisers for providing the opportunity - I highly recommend the gathering for next year.'' 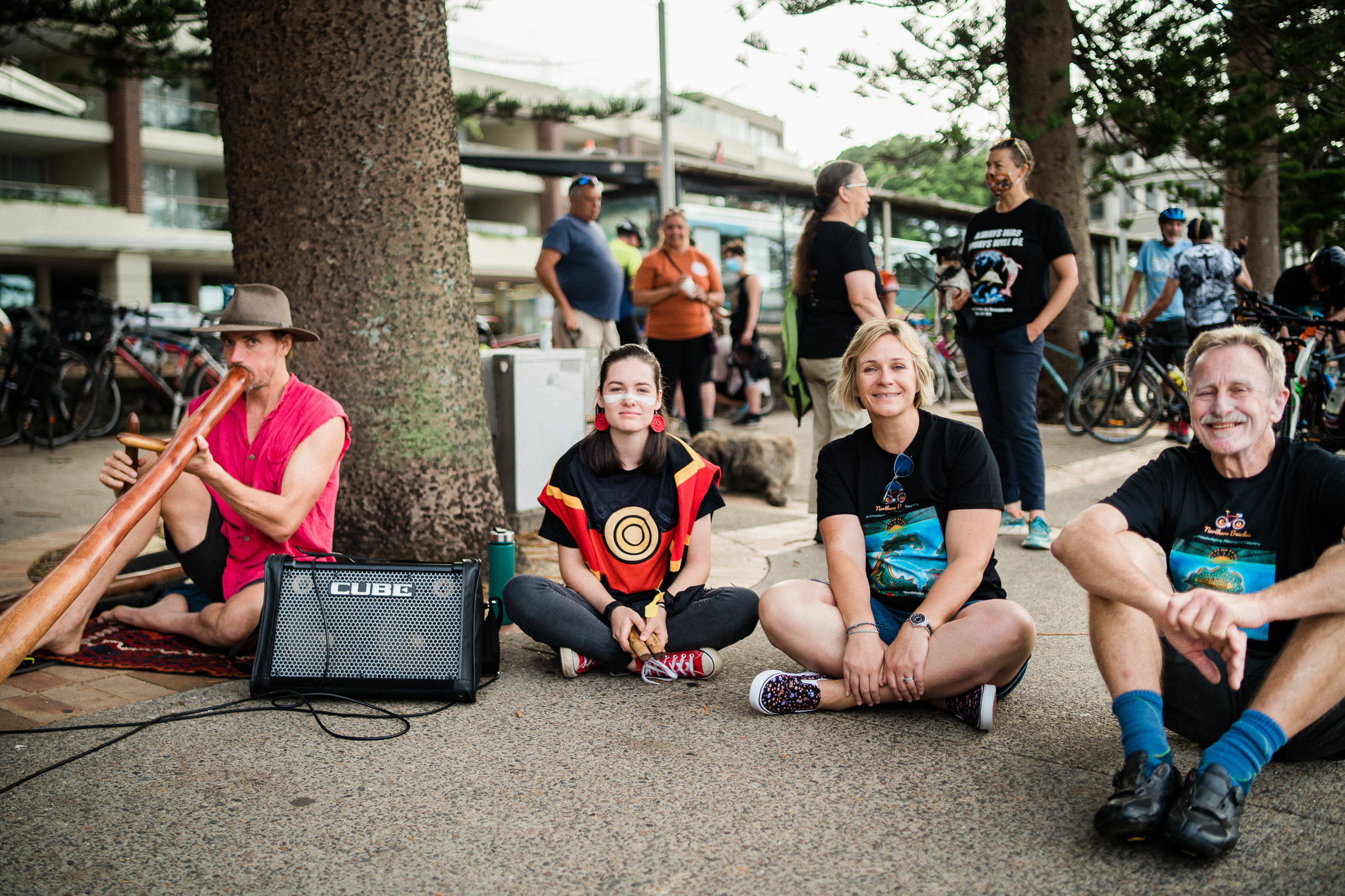 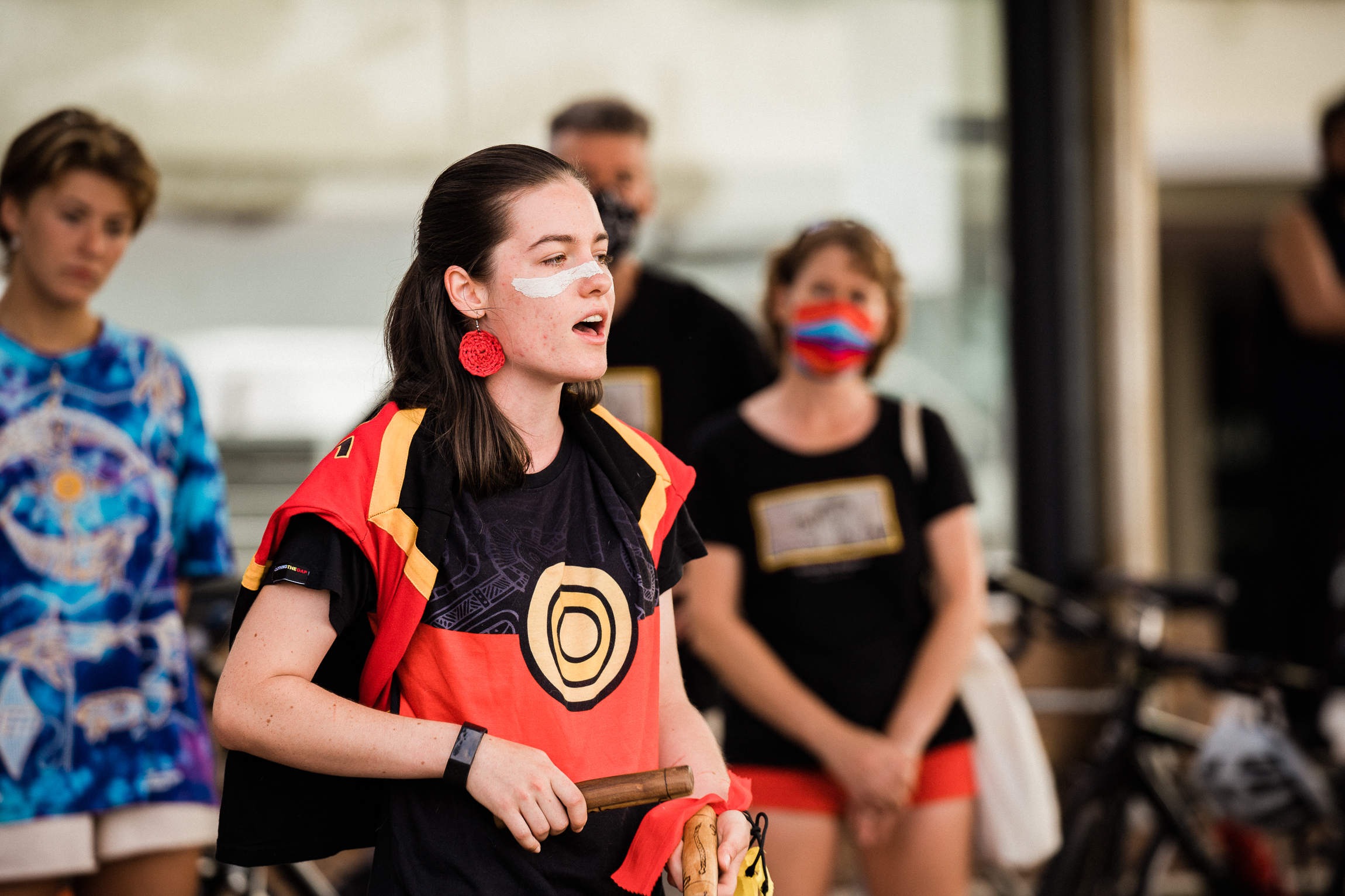 Federal Election 2022 Independent Candidate for Mackellar Dr. Sophie Scamps joined the riders at Manly and rode to Church Point with them.

People joined the ride at Dee Why and Narrabeen.

At Mona Vale Headland, 40 people were waiting with some starting from there for the ride.

Arriving at Church Point the cyclists were treated to a warm welcome from  around 60 people, including the Greens Councillors Miranda Korzy and Kristyn Glanville, and the Greens Candidate for Mackellar in the 2022, Ethan Hrnjak.

Ms Glanville stated; ''the current date which we celebrate Australia Day is one which is a sad reminder of our unfortunate colonial history. It is worth noting that Australia Day being held on 26 January has only been a unified national celebration since 1994, and has been celebrated across different states on a variety of different days in the past. As such, it is often incorrectly suggested that those who wish to change the date are in some way seeking to rewrite a long standing unified national celebration, which is not the case.''

From my own perspective, the date it marks (Arthur Phillip planting the Union flag at Sydney Cove) is of less objective historical significance to the formation of Australia than a variety of other dates, including the 1st of January 1901 when we were federated as a nation.

If it were not already a public holiday, my [preference] is that 1 January would be a far more obvious date to mark Australia Day. My personal opinion is that the date should be changed to a neutral date which does not carry a legacy of sadness for Aboriginal people, for example, I would support moving the celebration to the 3rd Friday of January, so that every year Australians have a long weekend to celebrate being Australian with their friends and family.  This is not something, however, which Council has control over.

It is commendable our local Aboriginal community has organised an annual event on Australia Day which seeks to grapple with our complex history, inviting Aboriginal and non-Aboriginal people in our community to cycle from Manly to Church Point in solidarity.''

At Church Point a Welcome to Garigal Country was given by Uncle Neil Evers, a direct descendant of Broken Bay man Bungaree, who went around Australia in Matthew Flinders circumnavigation. Uncle Neil spoke about how the day an English flag was raised at Sydney Cove on Saturday January 26, 1788. The formal establishment of the Colony of New South Wales did not occur on 26 January though.

The formal proclamation of the colony and of Arthur Phillip's governorship were read out and the vesting of all land in the reigning monarch King George III on February 7th on the basis of 'terra nullius' despite this land having been occupied by the oldest continuous culture in the world - one that can trace its roots through Australia for 60 thousand years.

The first recorded celebrations of this was held in 1808 to mark twenty years. The Governor Lachlan Macquarie, held the first “official” celebrations in 1818, to mark thirty years of European settlement.

On January 31st 1938, a deputation of about 20 people met with the Prime Minister, Joseph Lyons. They called for Commonwealth control of all Aboriginal matters, with a separate Ministry of Aboriginal Affairs.

The Prime Minister replied that, under the Constitution, Commonwealth control was not possible. WHY?  Because, Aboriginal people were not mentioned in the constitution.

The first person to hold the Federal seat of Mackellar, Bill Wentworth, was an outspoken champion for his beliefs and others who had a deep compassion for those similarly ignored -  Australia's indigenous peoples. He became the first Minister for Aboriginal Affairs and a lifelong campaigner for our indigenous peoples.

Uncle Neil explained that the Day of Mourning was held annually on the Sunday before Australia Day - from 1940 -1955, was known as Aborigines Day. In 1955 Aborigines Day was shifted to the first Sunday in July and it was decided the day should be a day to celebration of Aboriginal culture.

This is where - National Aborigines and Islanders Day Observance Committee NAIDOC Week 3-10 July stems from and from the theme of “getting up, standing up, and showing up”. This is a time for Celebration of Aboriginal culture and knowledge.

This year is the 50th anniversary of the January 26, 1972 established Aboriginal Tent Embassy in Canberra. The Embassy is the world's longest continuous protest for Indigenous land rights.

Mr. Evers also spoke about the Australian Government having spent $10.3 billion 2020-21 subsidising coal and gas companies while there are many Aboriginal communities without adequate housing, health care, quality food and clean water.

Aunty Clair Jackson spoke about the significance of women in Aboriginal culture, Catherine Donnelly spoke about The Uluru Statement and The Aboriginal Voice to Parliament. Colin Hutton thanked everyone for their participation and asked for all to think of the thousands of years of history in Australia and that we are all walking in the footsteps of all the thousands of people that have gone before us.

Didgeridoo playing was by Matt James, singing by the three Wassell sisters in Darug language, as well as a song by Vince Konijn, finishing with a group rendition of 'We are Australians'.

Thanks go to Melinda Rippe for getting the signatures to keep us Covid safe, and all the clapstick players.

Let us walk together in Guringai Country as one 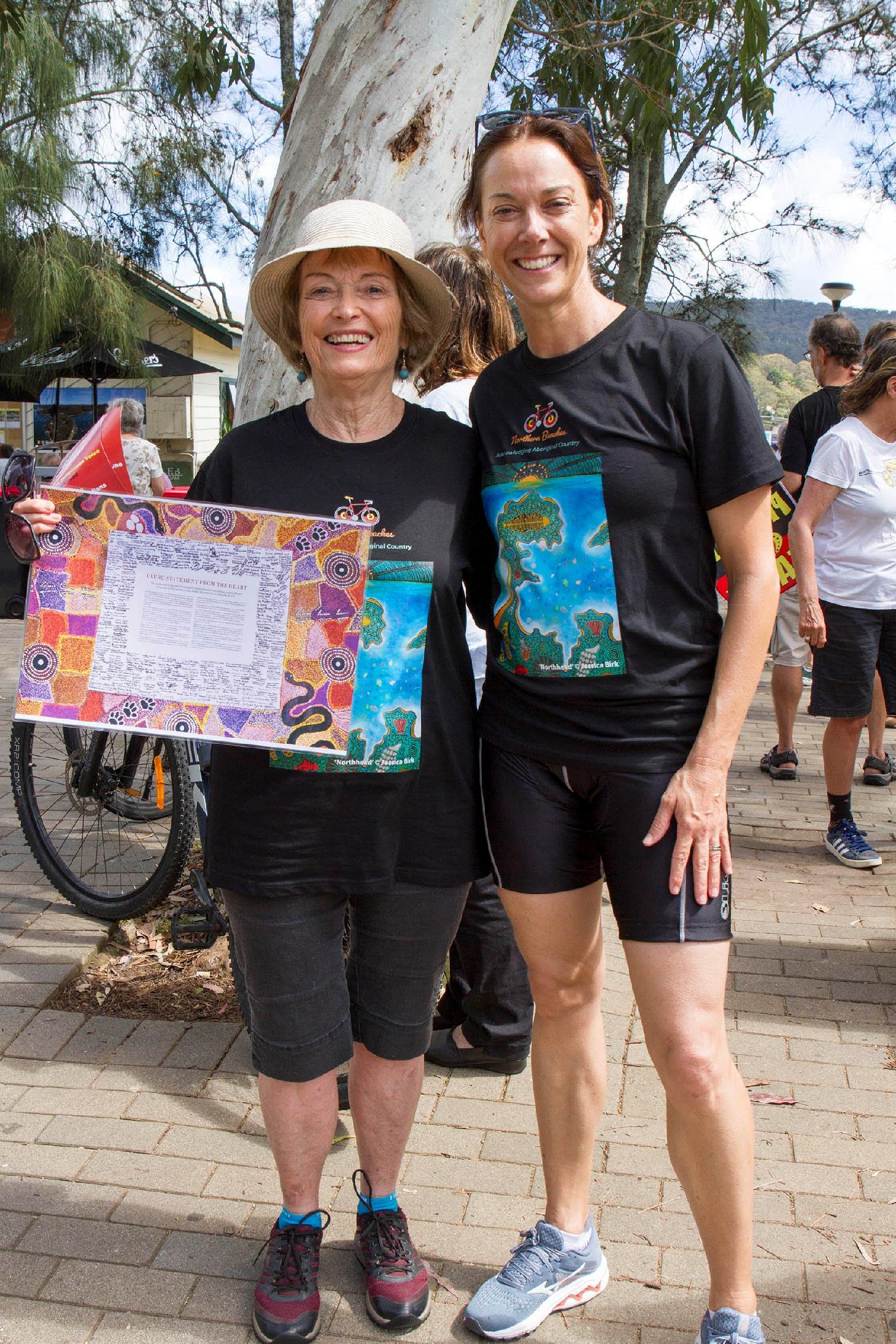 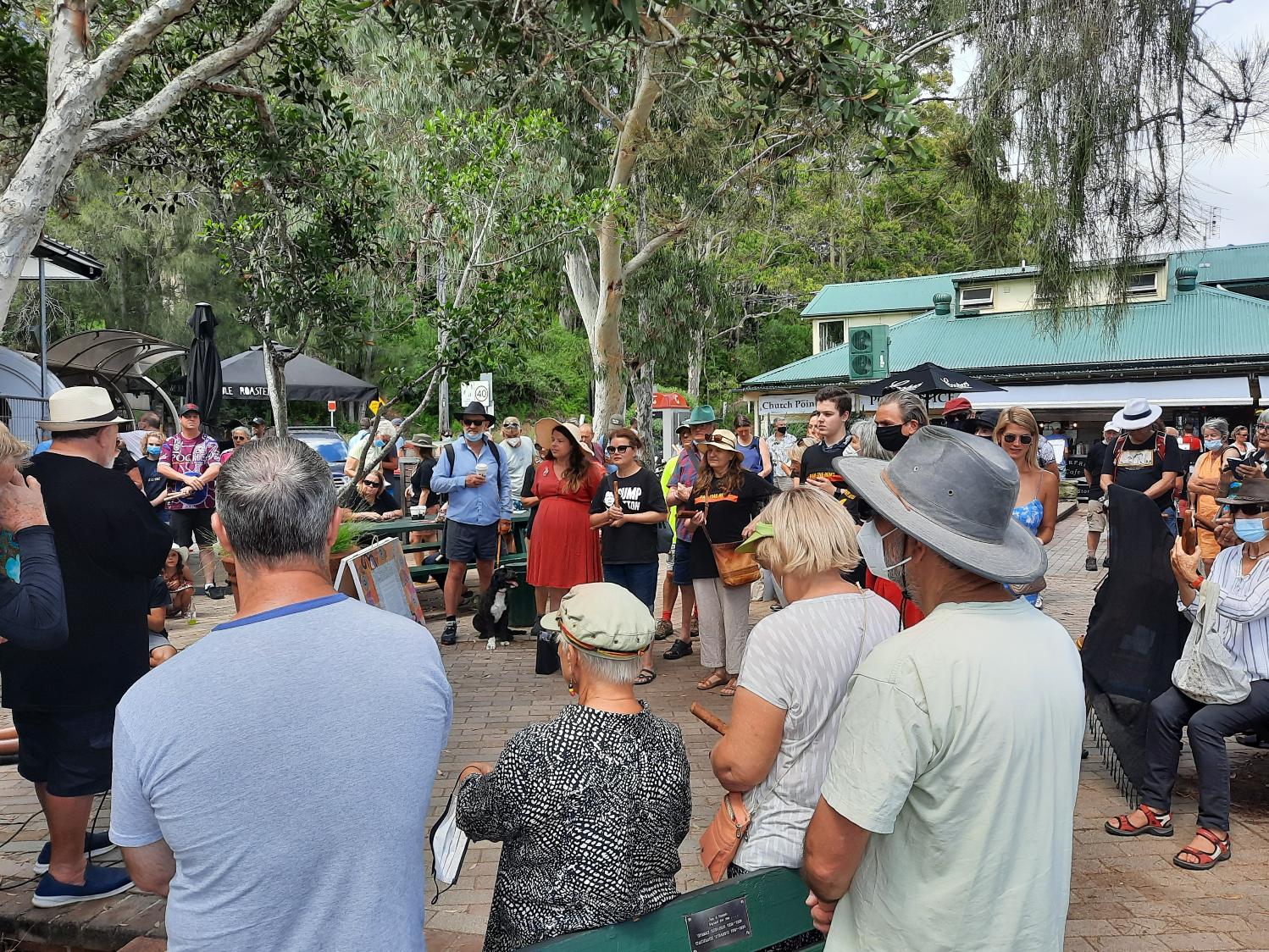 Those who gathered at the Church Point end of 2022 Ride with Aboriginal Peoples.
Tweet