Radio Footprints Of Galactic Interactions Discovered In The Shapely Supercluster 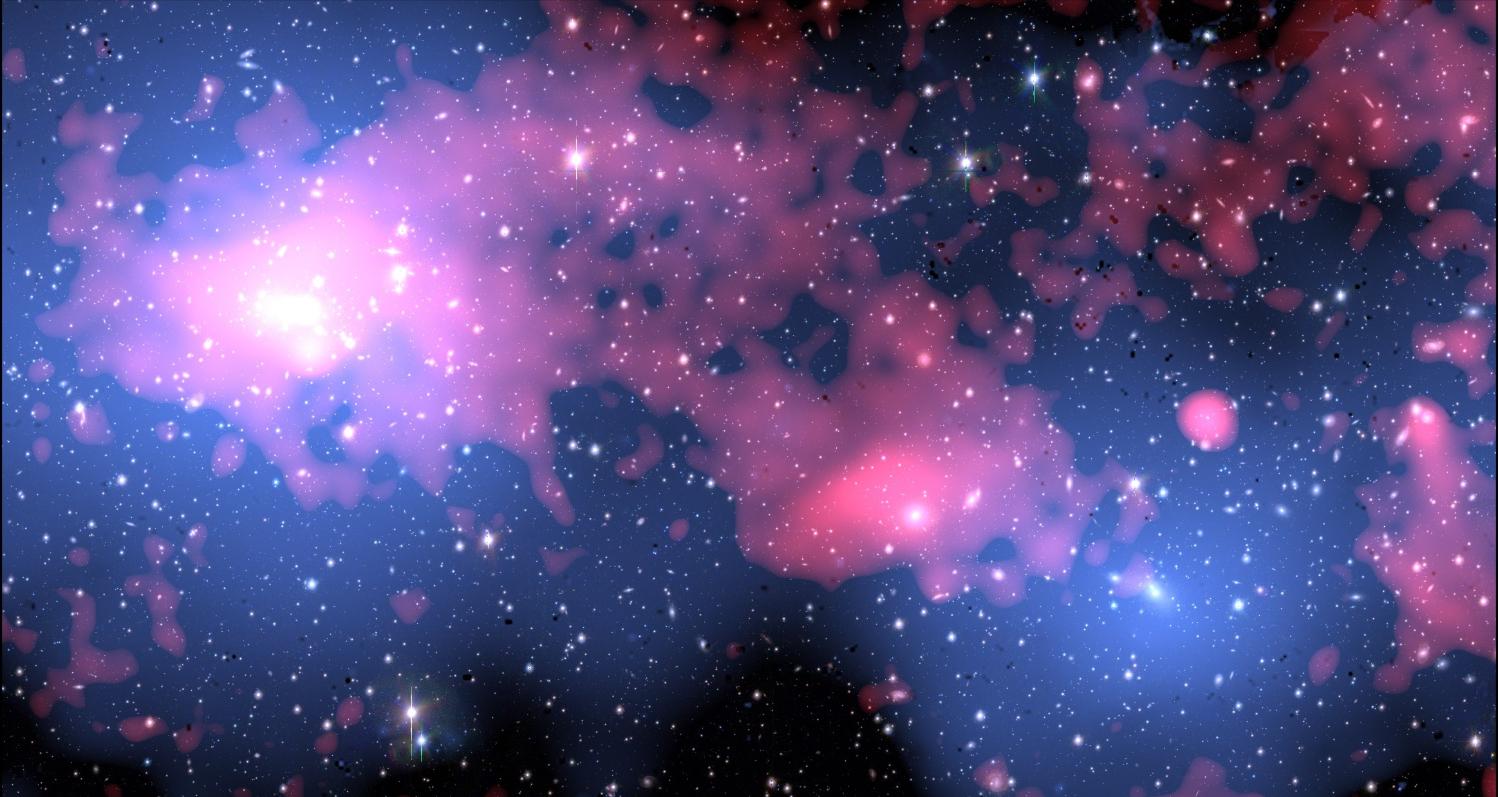 Composite image of the central region of the Shapley Supercluster. The galaxies, seen in optical light, were captured by ESO-VST; The areas of blue are the emissions of hot gas permeates the whole region, detected by XMM-Newton; The radio emission, detected by MeerKAT, is represented in red. ©  G. Di Gennaro
January 24, 2022

Interaction between clusters and groups of galaxies within a supercluster have been observed through the detection of radio waves by telescopes all over the world.

A group of international radio astronomers led by the Italian National Institute of Astrophysics (INAF), and including Australian Astronomical Optics (AAO) Macquarie, have conducted a multi-frequency and multi-band study of the Shapley Supercluster, the largest constellation of galaxies in the local Universe. The astronomers discovered radio emission which was acting as a "bridge" between a cluster of galaxies and a group of galaxies.

“The emission was triggered by the collision of these separate groupings of galaxies,” said co-author Professor Andrew Hopkins from AAO Macquarie. “Despite its difficulty to detect, this unique emission will now allow astronomers to better study the regions between clusters of galaxies.”

Tiziana Venturi, Director of the INAF’s Radio Astronomy Institute and lead author of the article, explains:

"This exceptional emission finally allows us to study the regions between clusters of galaxies, the ideal environments to look for traces of interaction between these structures. In the study, we also report the discovery of another couple of objects - a very peculiar head-tail radio galaxy and a ram-pressure stripped spiral galaxy, whose origin is traced back to the same collision phenomenon that generated the emission on the megaparsec scale". The emission extends on the scale of millions of light-years, and it takes the form of an arc and a filament.

“Ram pressure stripping can have a profound impact on the evolution of galaxies, removing the cooler gas that helps with star formation,” said Professor Hopkins. “This case shows that ram pressure stripping can involve both warm gas and radio-emitting plasma, and highlights the role of cluster-cluster interaction in triggering it,” said Professor Hopkins.

“The head-tail radio galaxy, whose tail is broken and culminates in a misaligned bar, is now being observed in a number of clusters. Early analysis of this galaxy is showing some exciting results, which deserve further investigation.”

The Shapley Supercluster covers a large area of the southern hemisphere sky 600 million light-years from the Milky Way in the Centaurus constellation. As a result, the region hosts over 1000 clusters and groups of galaxies, which allows an in-depth study of the role of the environment on the evolution of galaxies and on the thermal (gas) and non-thermal (radio emission and magnetic fields) components that make up the clusters of galaxies.

This particular region first captured the interest of radio astronomers in the 1990s. However, before the development of ASKAP and MeerKAT (the two precursors of the SKA project, respectively managed by the Australia’s national science agency, CSIRO, and by the South African Radio Astronomy Observatory), it has basically been impossible to study it, in this fashion due to the lack of radio interferometers in the southern hemisphere with the necessary sensitivity.

Venturi adds “Now, ASKAP and MeerKAT have both unlocked greater access to the Shapley Concentration with the higher resolution and sensitivity to study this area in more depth. The synergy between the very high-quality radio data and other X-ray and optical data allowed a very detailed study.”

The radio data represent the state of the art of precursors of the SKA project and provide only a first taste of the wealth of information and discoveries that will come with the SKA radio telescopes (the construction will start in 2022 in Western Australia and South Africa), as well as the complexity of the data analysis that radio astronomers will have to face soon.

The study aims to highlight the observational effects of the so-called minor merger phenomena. Until now, it was not clear whether scale relations between various clusters and groups would also apply to these phenomena, less striking but much more common in the Universe.

“We were able to show through this study that these phenomena can be rather remarkable and that they leave detectable traces on single galaxies, on clusters and groups of galaxies, and even the regions between them," said Professor Hopkins.

The observations captured in this research also confirm the importance of technologies like SKA precursors on the understanding of the weak population of radio sources in clusters, both associated with individual galaxies and associated with the intra-cluster and inter-cluster medium.

This article was originally published by Macquarie University: Radio footprints of minor merger in the Shapley Supercluster discovered

We acknowledge the Wajarri Yamatji as the traditional owners of the Murchison Radio-astronomy Observatory site where ASKAP is located. 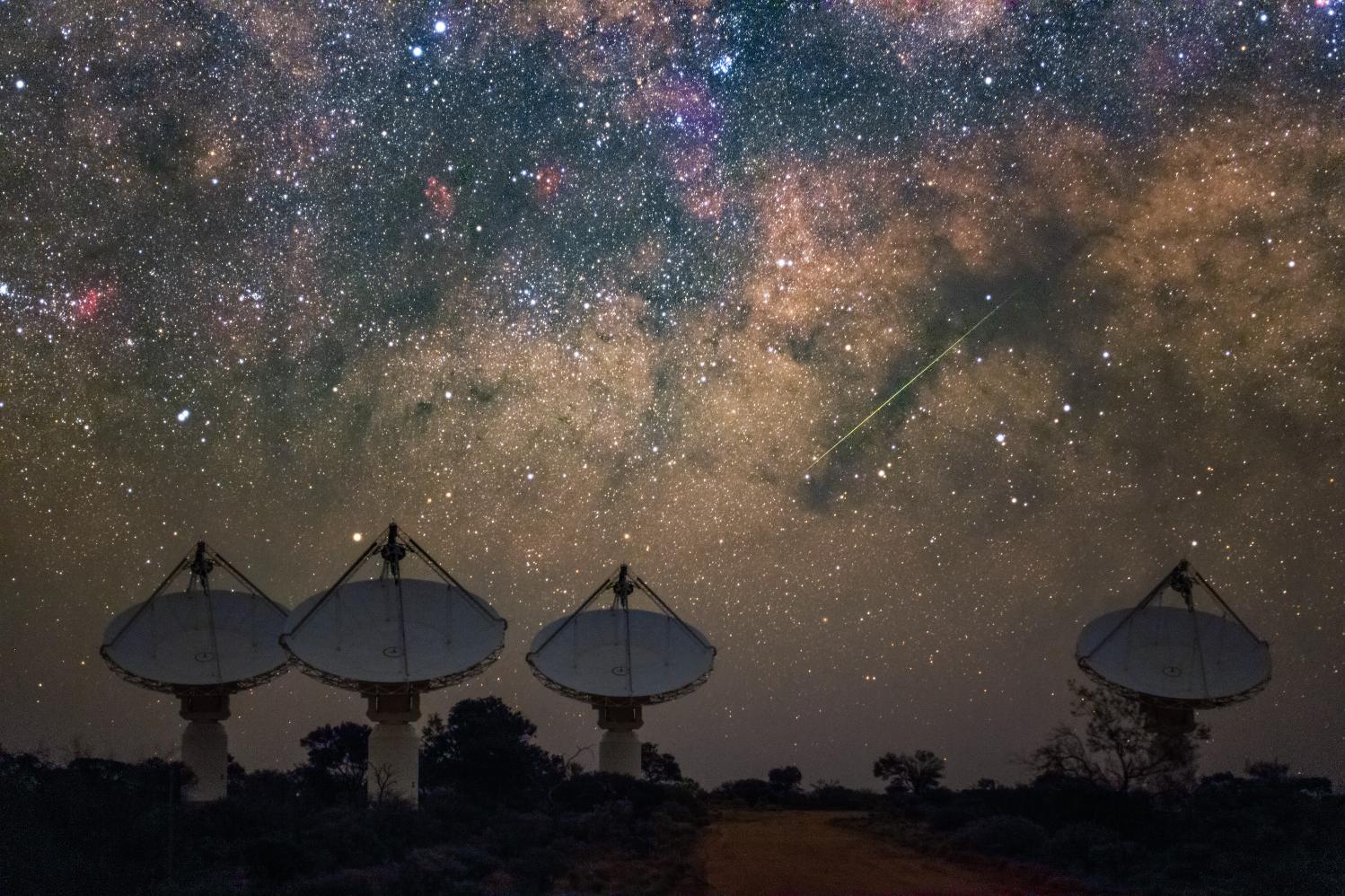