RMYC Multihull Division’s annual dinner and prizegiving evening was held last Saturday 17th June. This is the evening where we celebrate the end of the sailing year joined by sponsors and special guests. This year more than forty people enjoyed good food, good fun and socialising with friends, while applauding and congratulating the winners and place getters during the 2016-17 sailing season.
And apart from the serious stuff, there were plenty of smiles and laughs to be had as “special” awards were made for those not quite making a podium finish during the year but who deserved recognition in other ways.
All prizes for these special awards were presented by long-term division sponsor Inglewood Two Rivers wines Jane Orr joining us for the occasion assisted by Robin Ottowa whose company Summit Coatings generously donated the prizes.
In the following pics Jane and Robin are presenting the “good stuff” to Stephen Barton, David Bishop, Ron Bickerstaff, Barry Allertz and Stephen Hampson - all worthy special award winners.
Stephen Barton’s “J’Ouvert” earned recognition for his sometimes lone multihull participation on Friday evenings hence his win in the “Friday Twilight Persistence Award”. 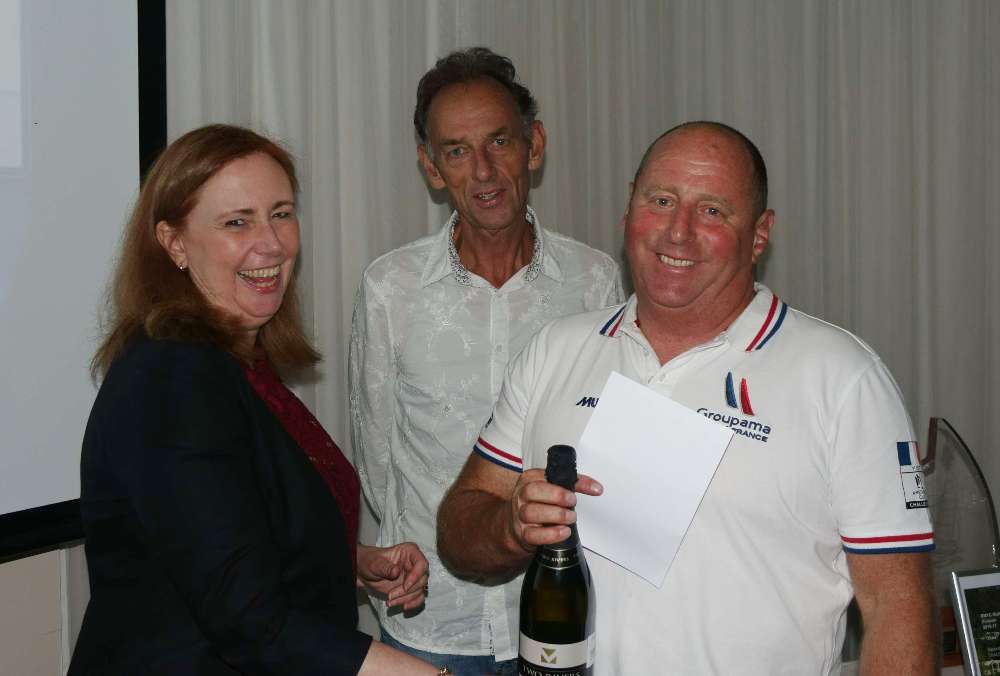 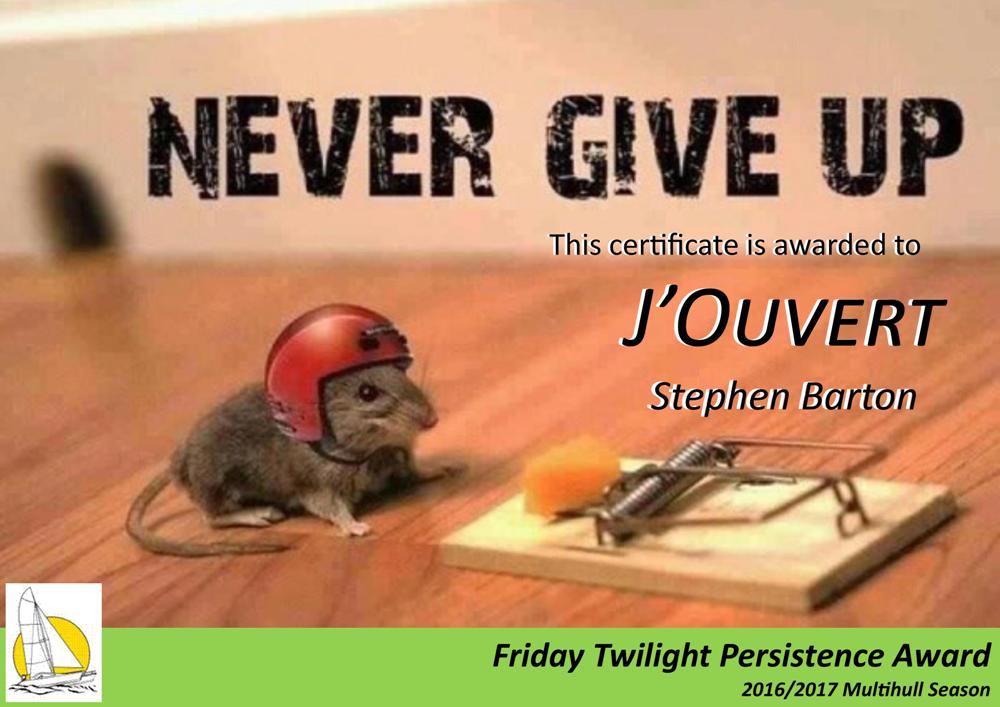 Stephen Barton,accepting the “Friday Twilight Persistence Award”
And the judges were alert to the fact that David Bishop’s cunningly titled “Coconut Airlines” was a clear give-away indication that, like the current America’s Cup foiling (“flying”) catamarans, intent was clear and David should receive the “Foiling Initiative Award”. 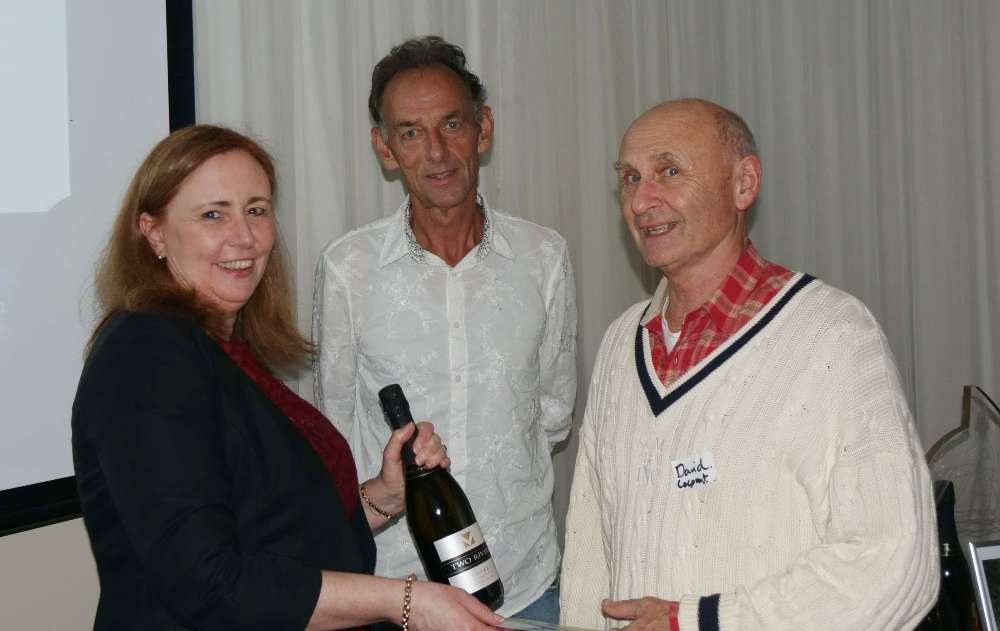 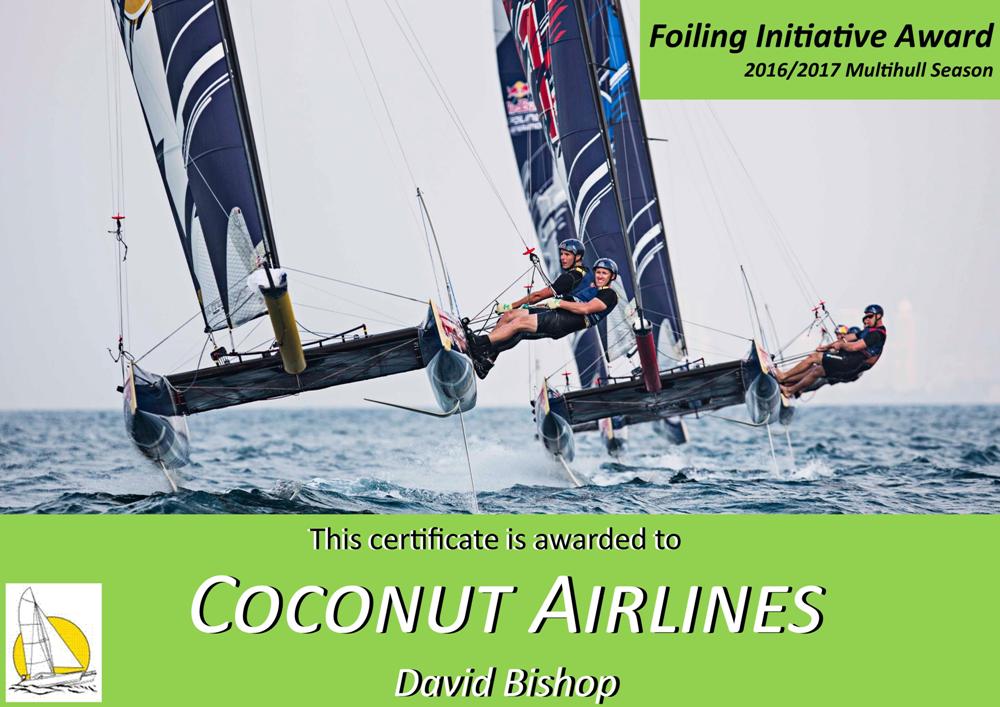 David Bishop, winner of the “Foiling Initiative Award”
Ron Bickerstaff’s Seawind 1000 “Déjà vu” earned the distinction of finishing the closest ever to the official race cut-off time of 4.5 hours – just one minute away. A record which will be hard beat in years to come. A deserved winner here of the “Closest to Official Race Cutoff Award”. 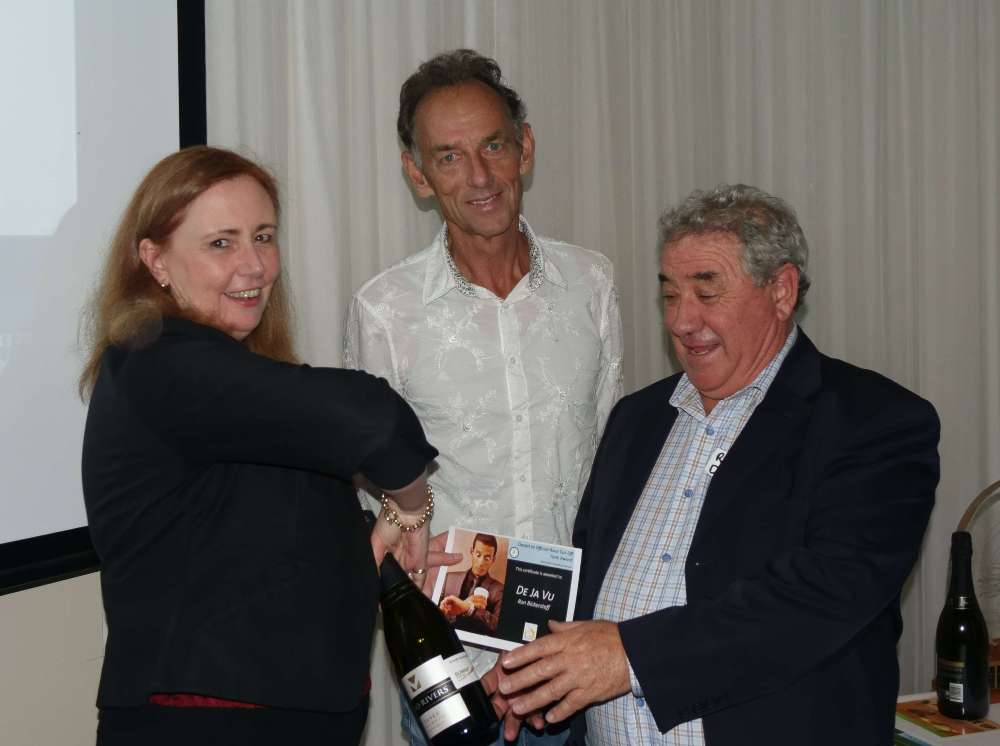 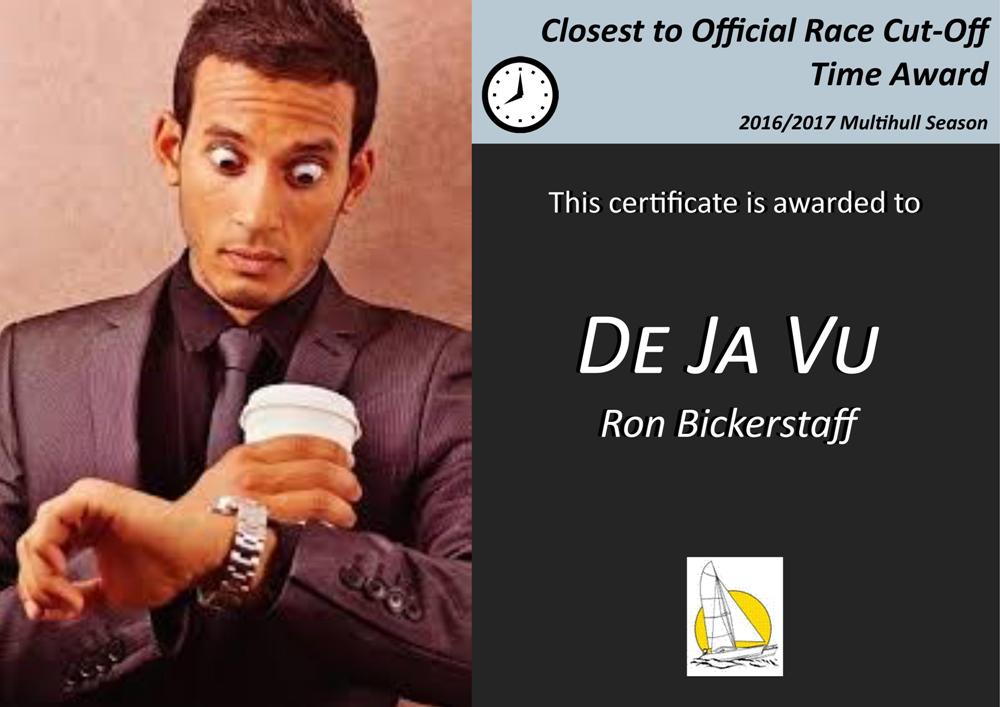 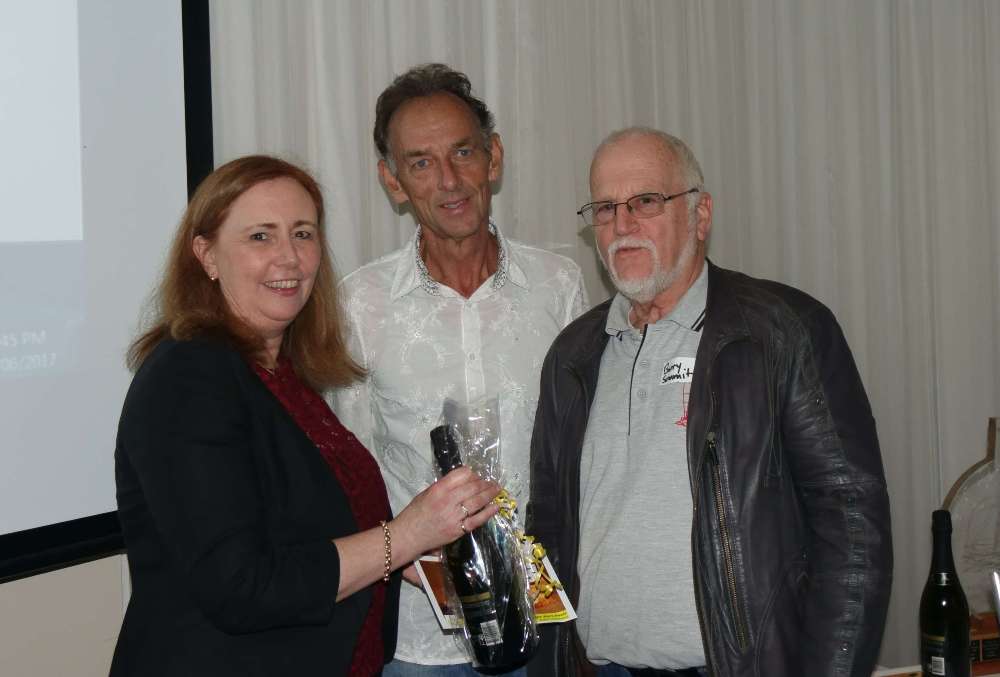 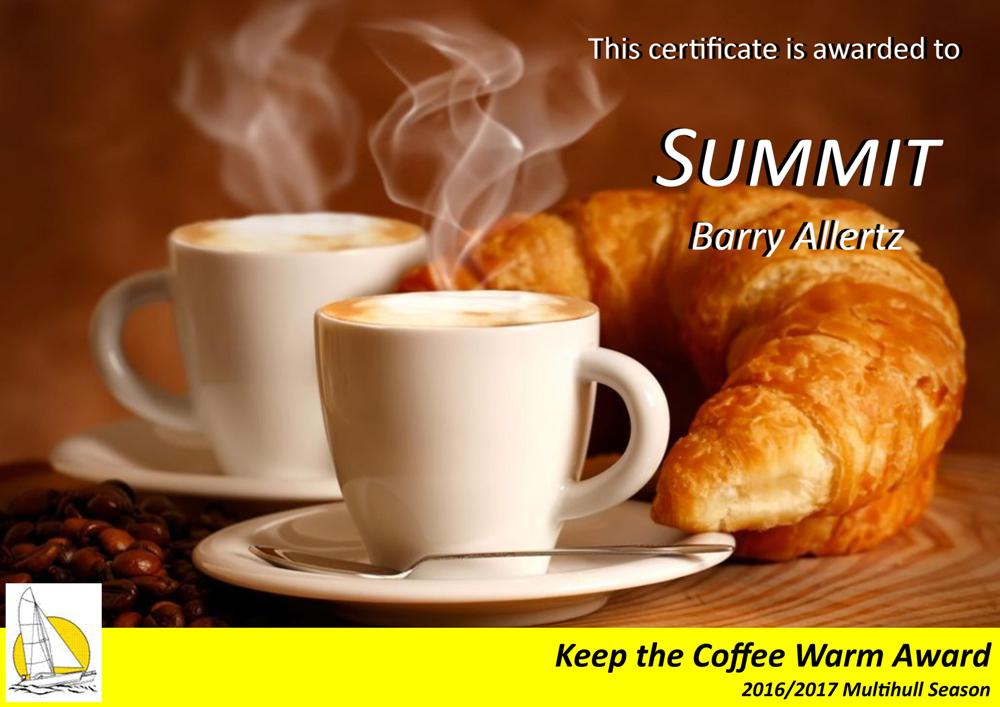 Barry Allertz, winner of the “Keep the Coffee Warm Award”
While the “Building the Fleet Award” went to newcomer to the fleet, Stephen Hampson’s wonderfully fast catamaran “Panther”. 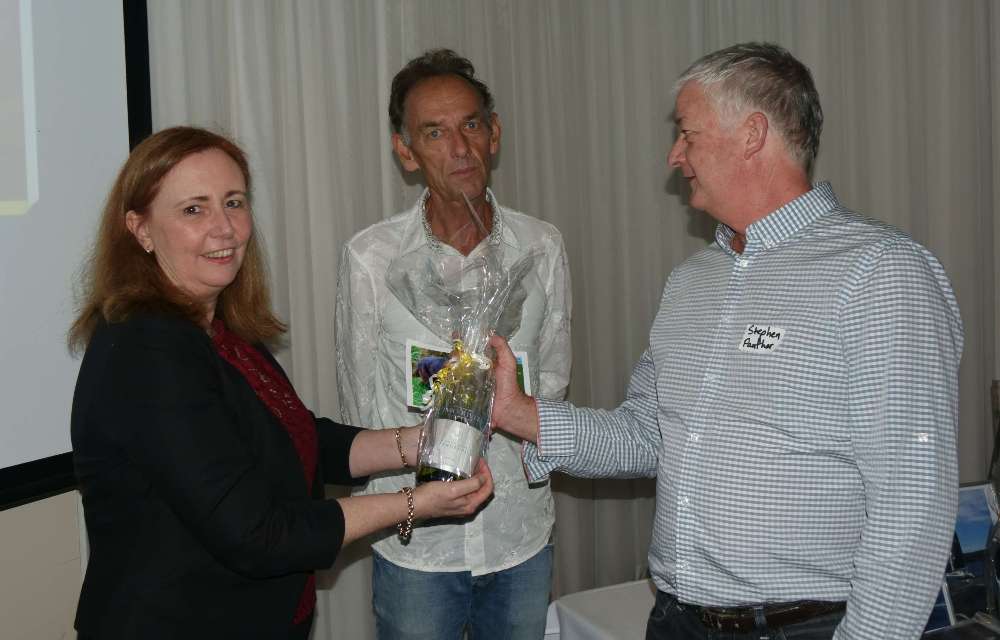 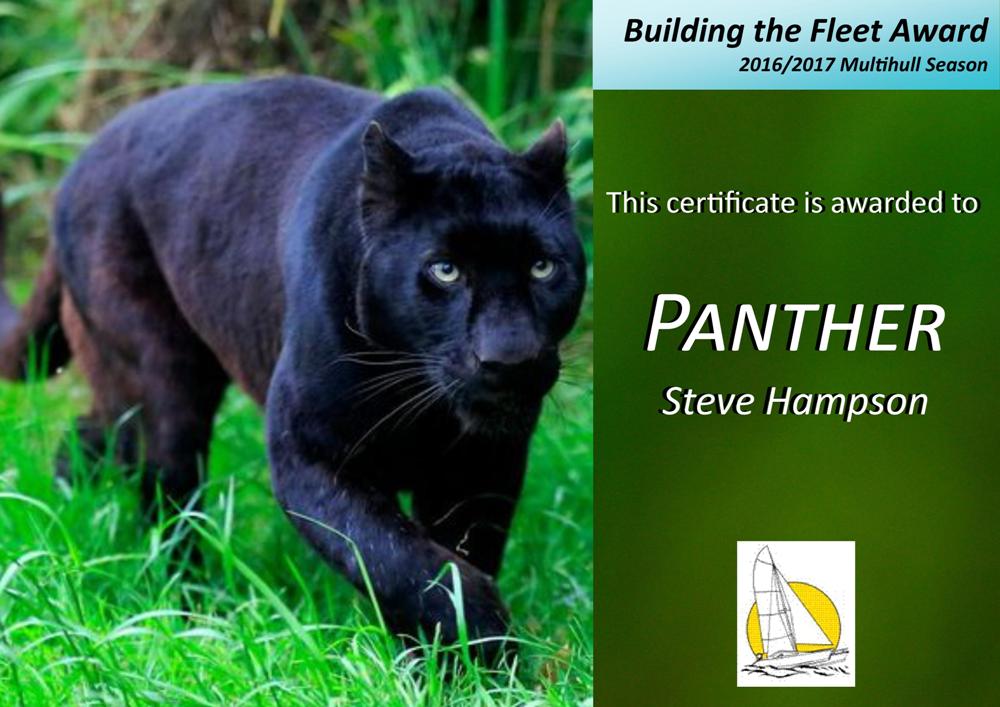 Stephen Hampson, winner of the “Building the Fleet Award”
And not forgetting the Homer Simpson Award for things that didn’t go quite as planned (aka the biggest stuff up!) 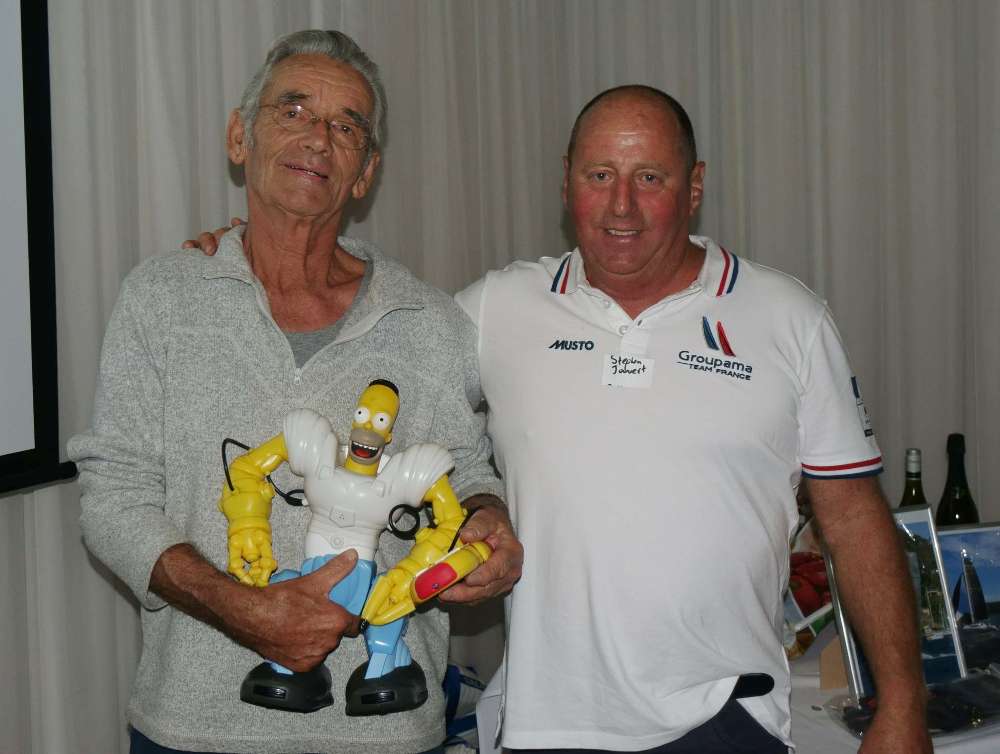 Yes, Kurt, Homer is yours to display proudly in the trophy cabinet for a whole year!
Turning now to some of the serious stuff, podium finishes during the year were won by Neville McElroy, Robin Ottowa, Alan Brand, Kurt Ottowa and Michael Finch, who with son Joe won the overall Club Championship for 2016-17 on Joe’s Burgess 30 “Bluey Zarzoff”. 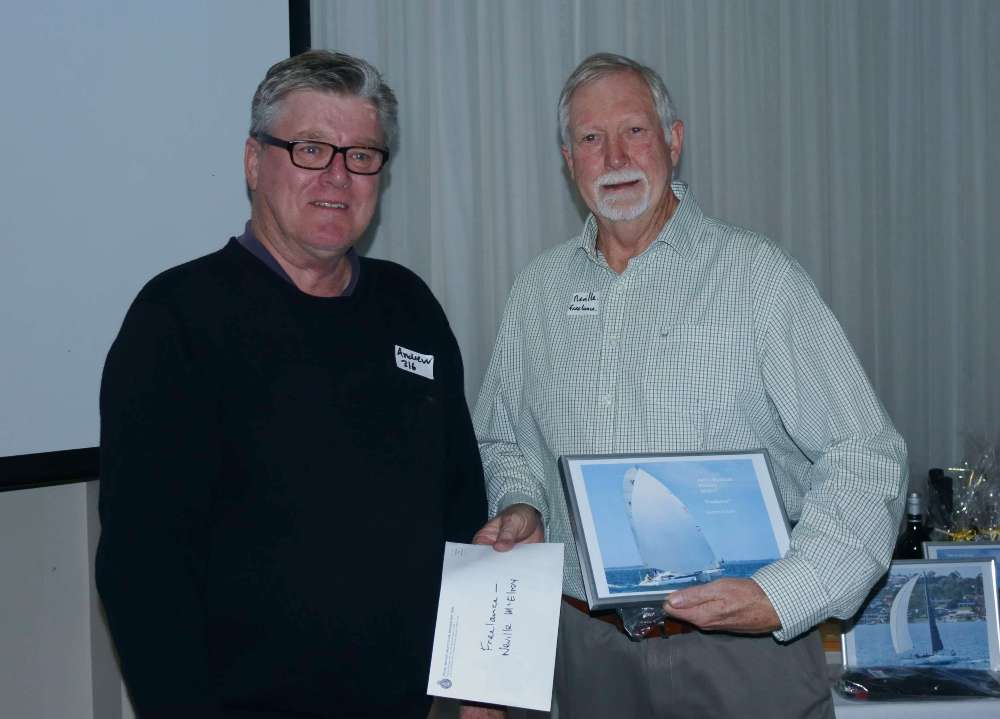 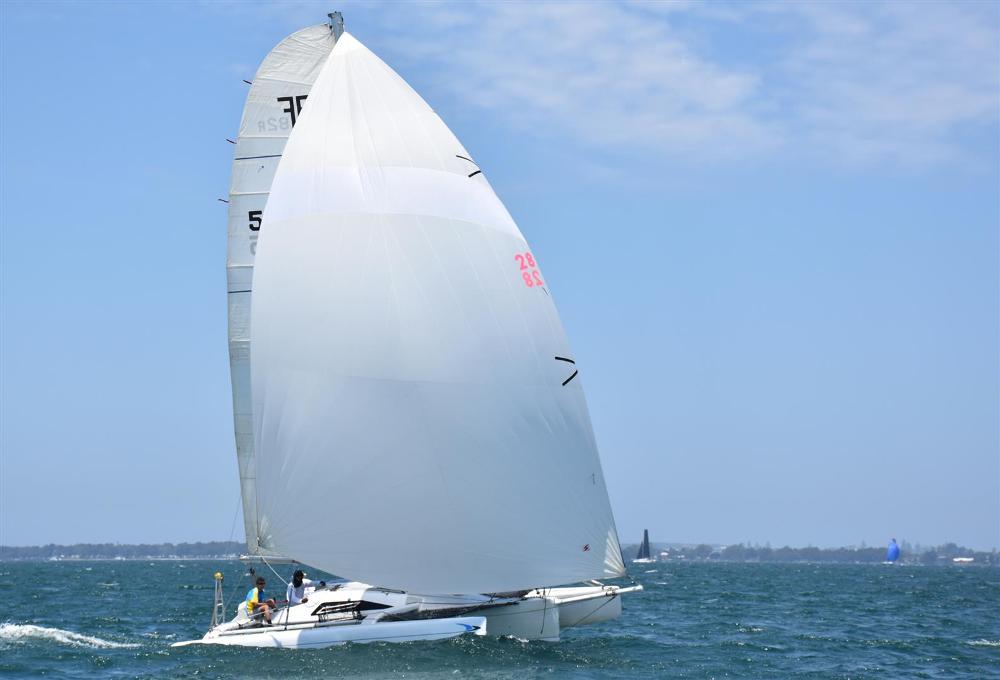 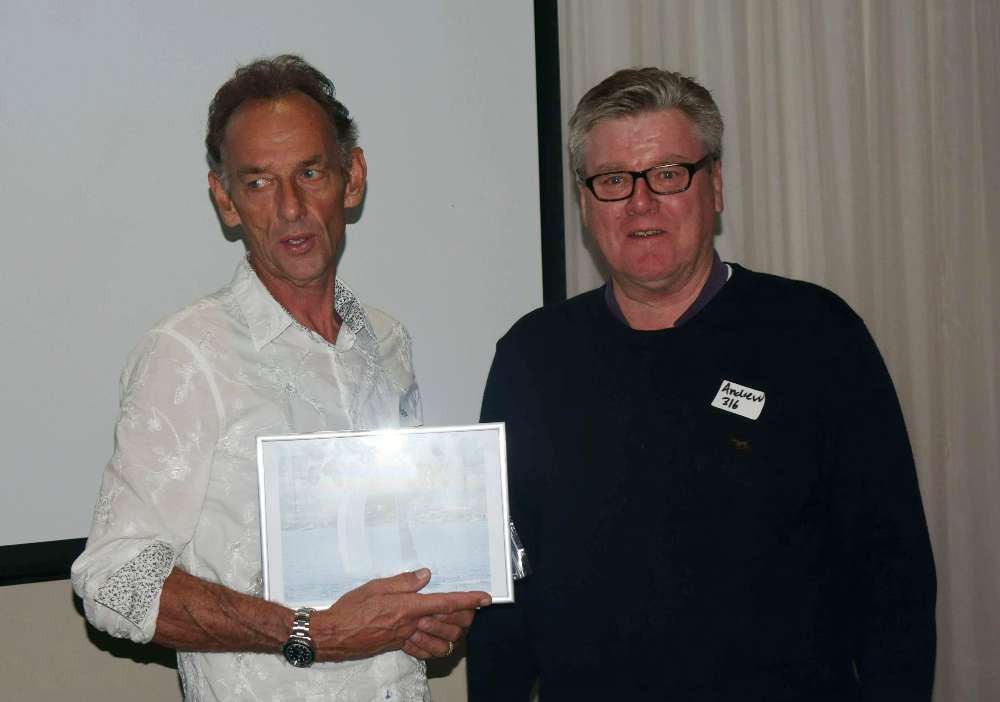 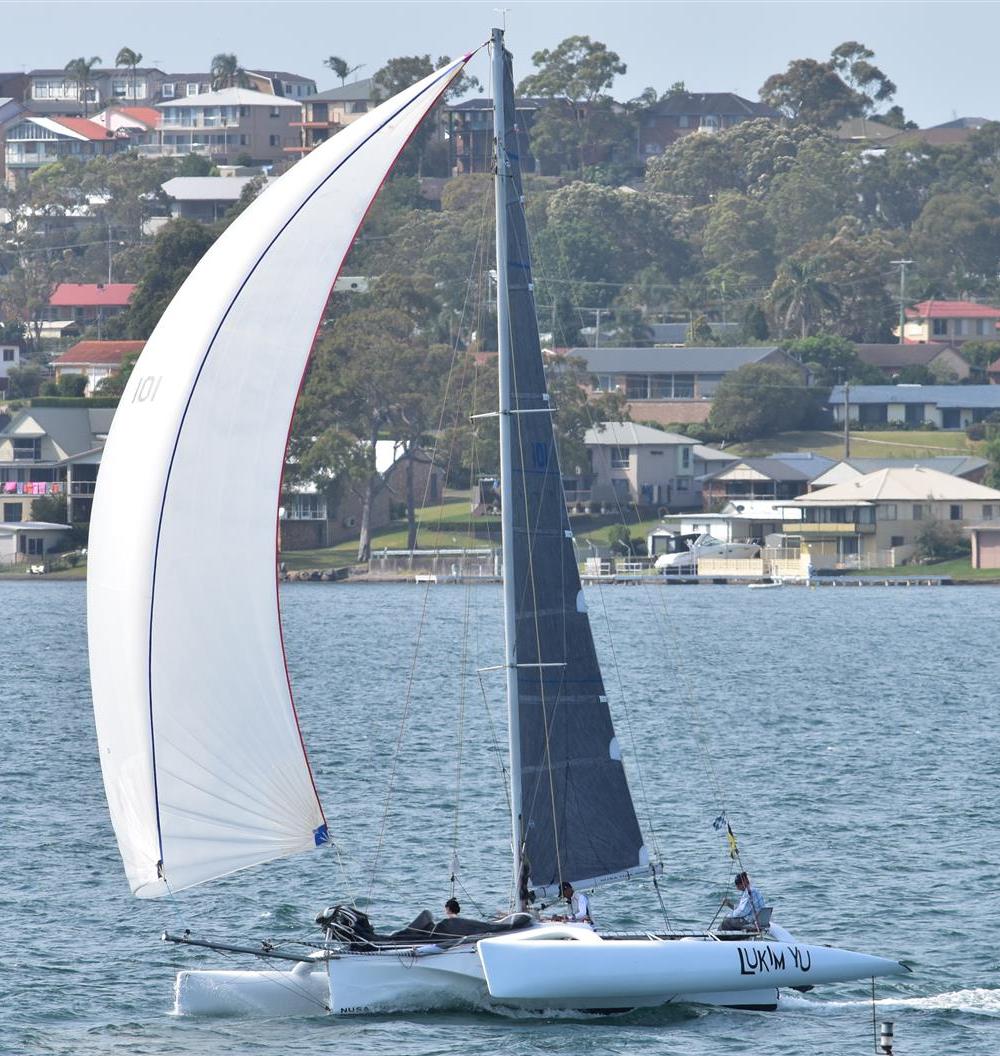 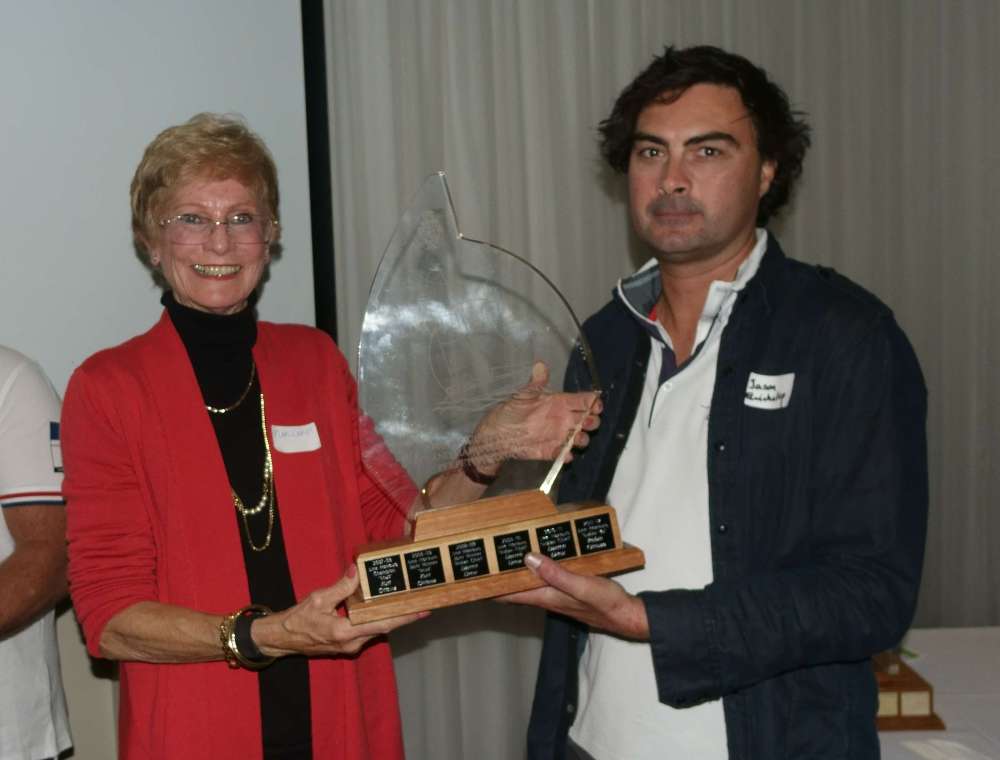 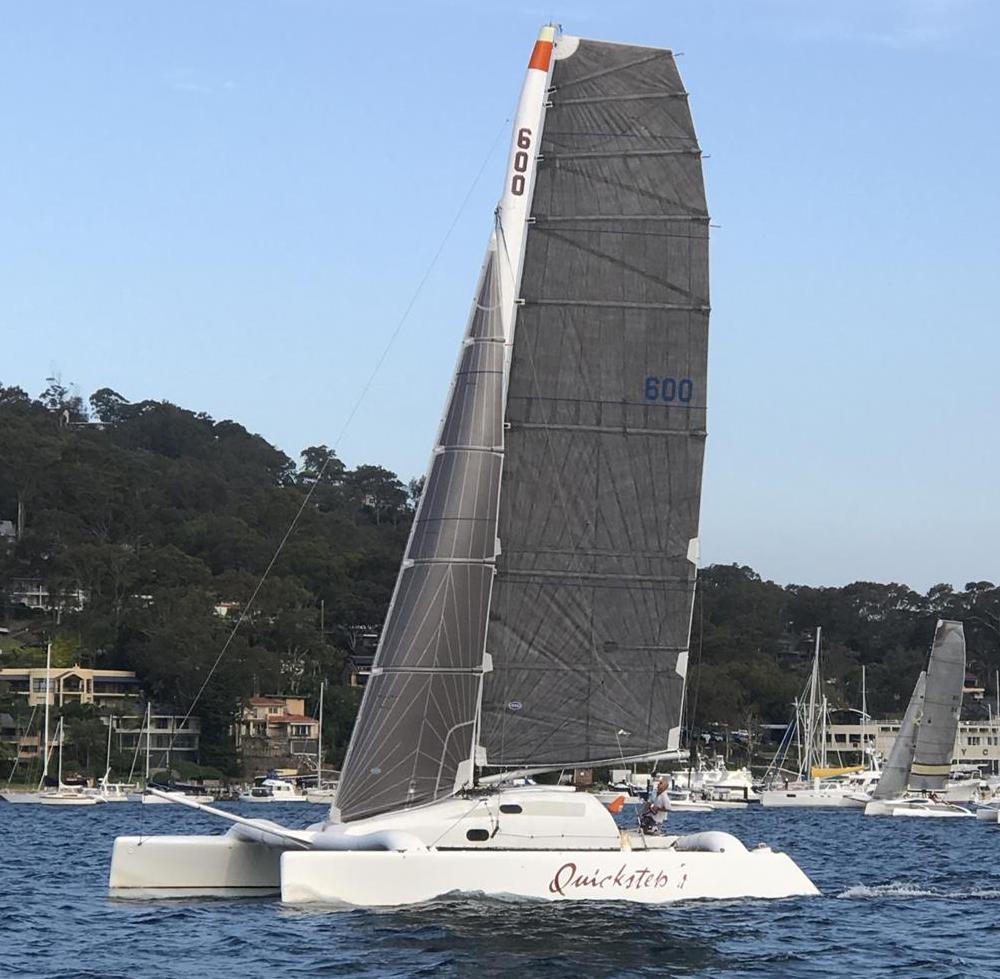 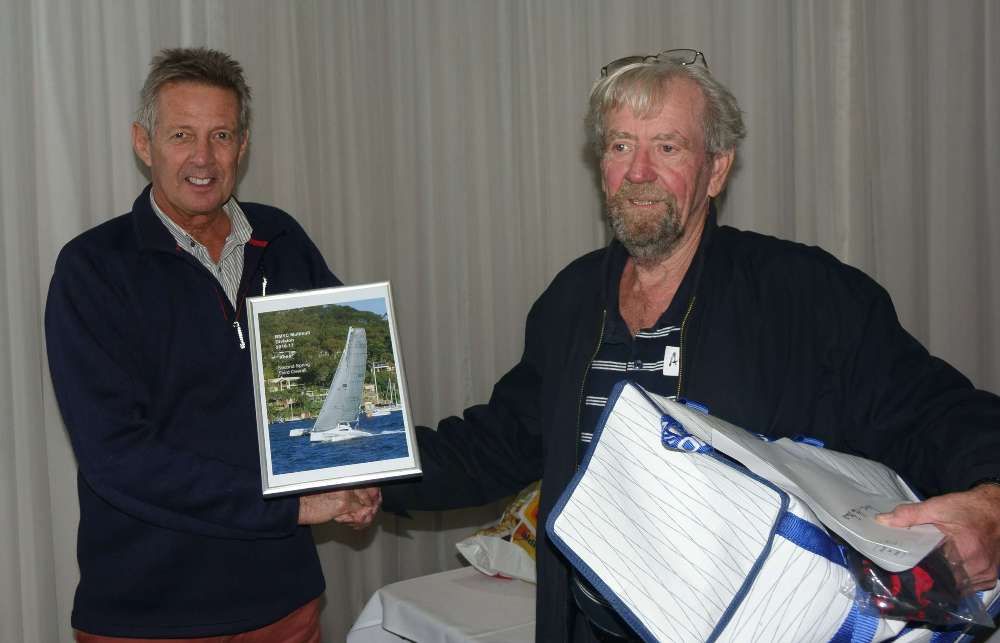 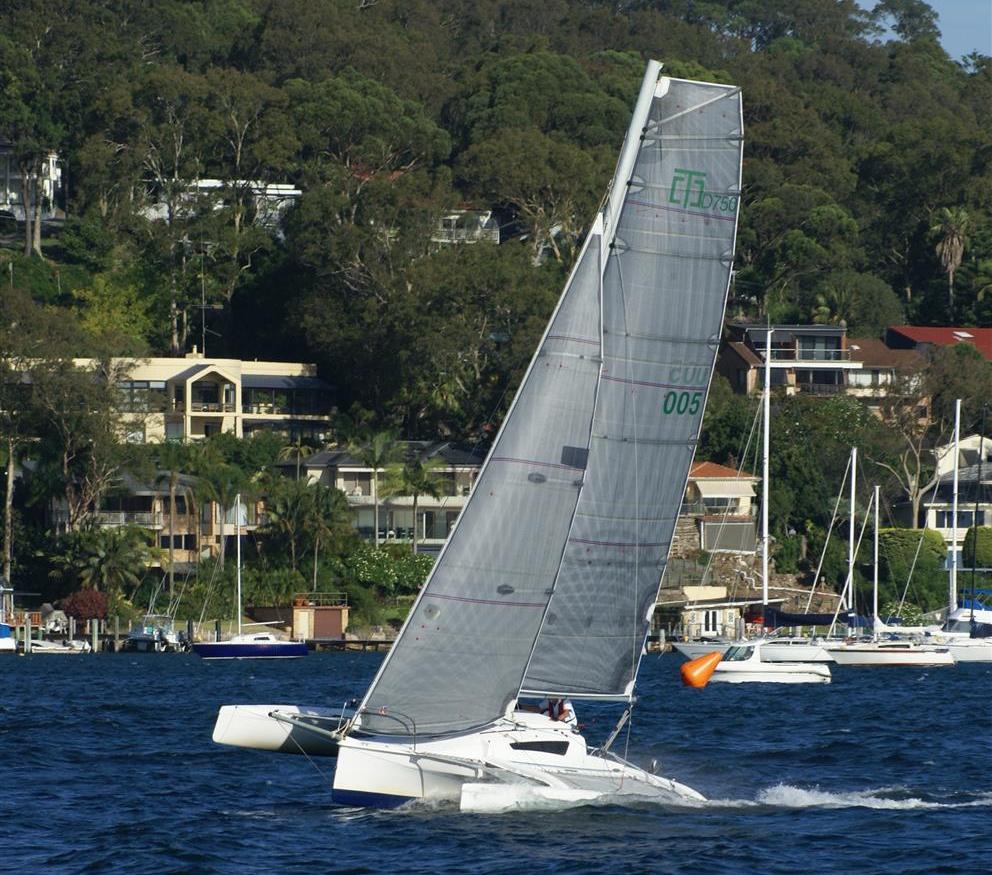 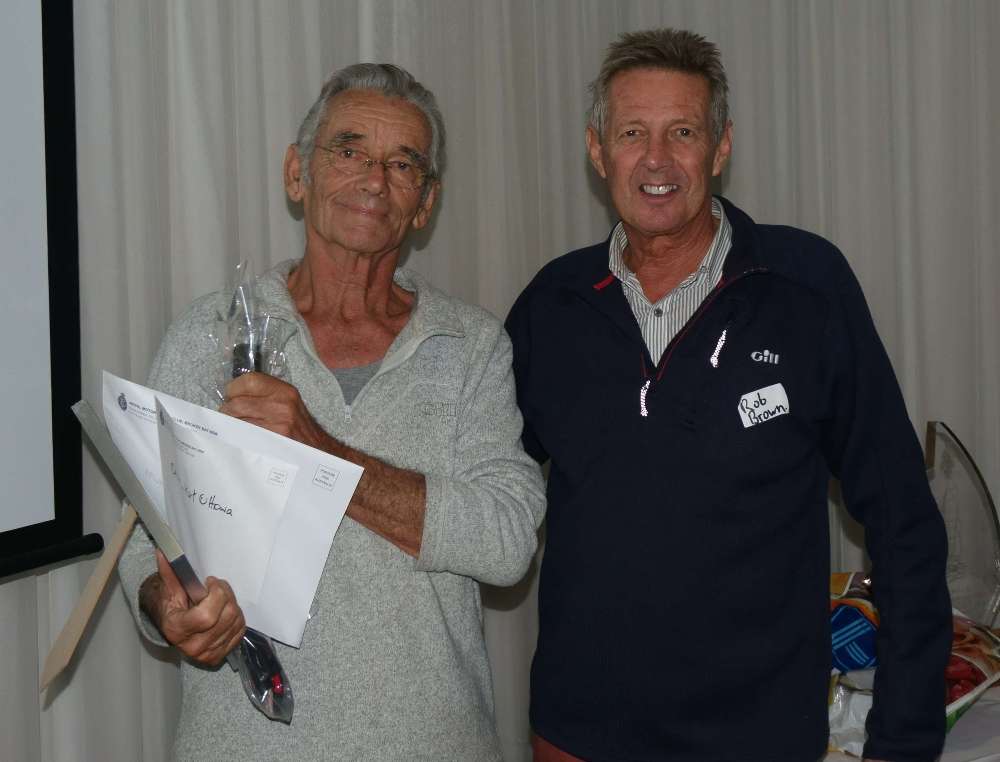 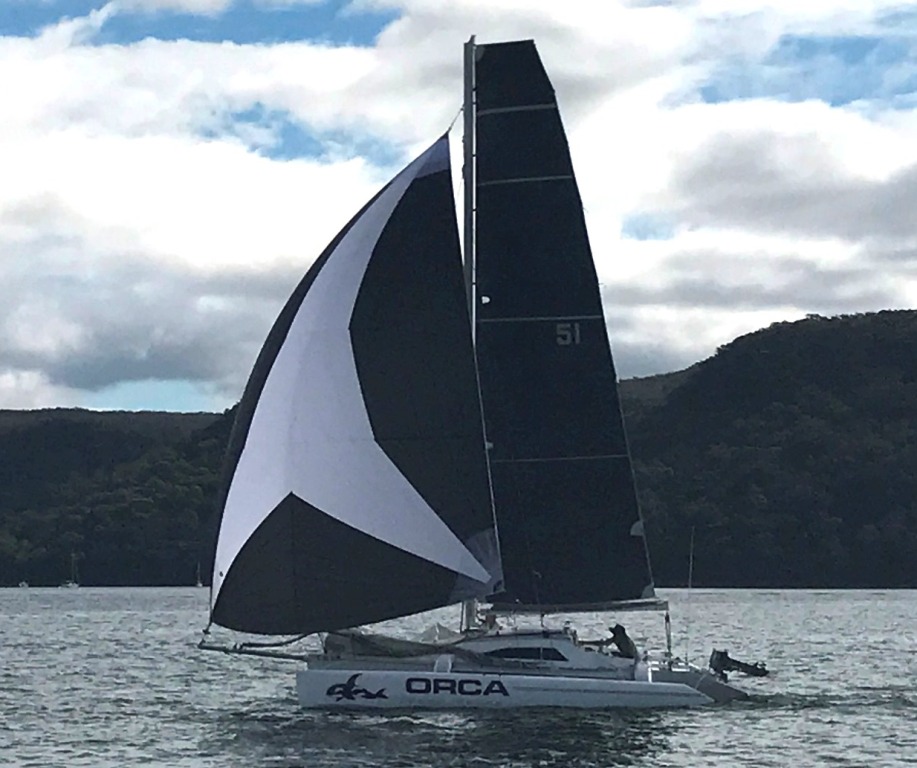 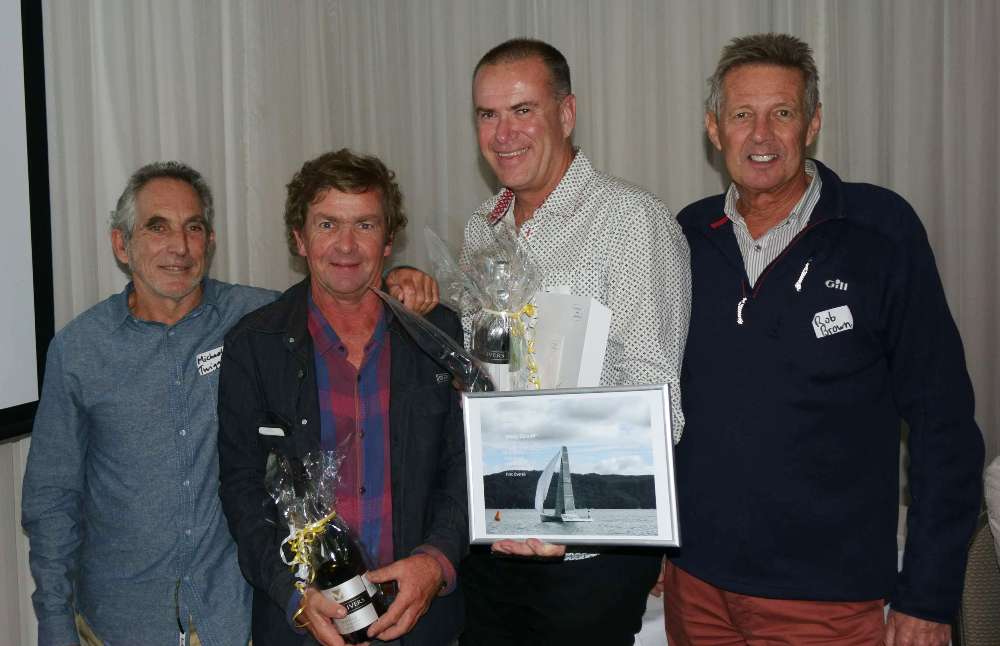 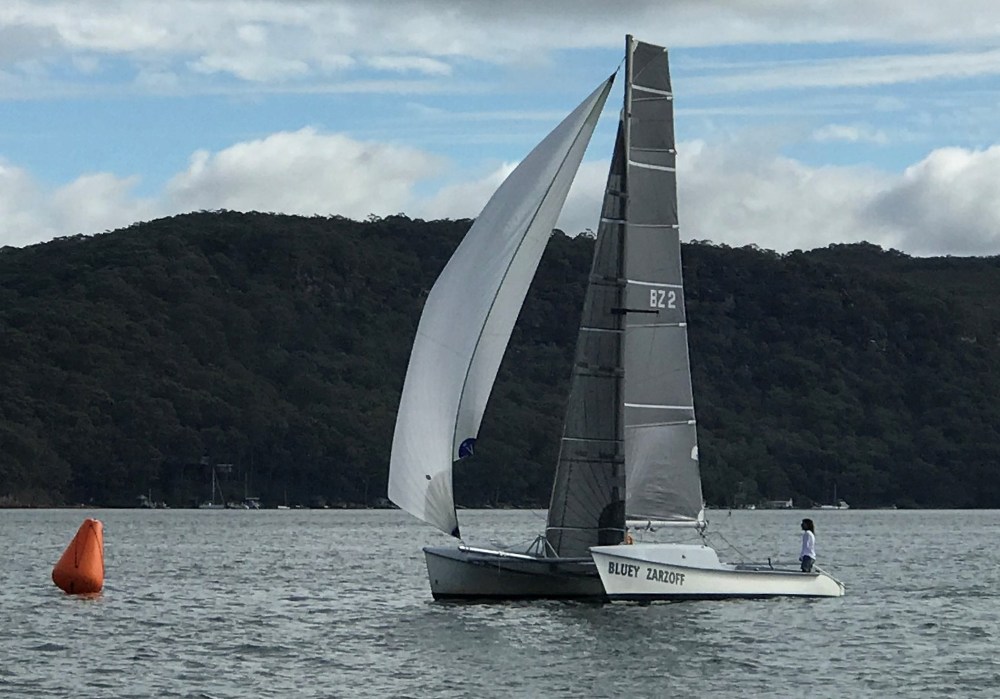 And the group of happy winners posing here
Finally, we wish to warmly thank our special guests for their contribution to the success of the evening. Margaret (Partridge) Rogers, friend and foundation supporter of the Division all the way back to its formation in 1994, husband John Rogers and Mary-Jane Partridge. Division sponsors Andrew and Rebecca Montague 316 Stainless Shop, Jane Orr Two Rivers Wines, Summit Coatings’ Robin and Conny Ottowa and Jason Geddes from Hood Sails. Sailing Division colleagues and friends James Hill, Michael Cramsie and Steve Lucas. RMYC management and staff, Rob Brown, Kevin Newman and John Woods with special mention to Jaz Rowntree for all her fantastic help and support throughout the year.
Alan Brand
RMYC Multihulls Race Secretary
Tweet