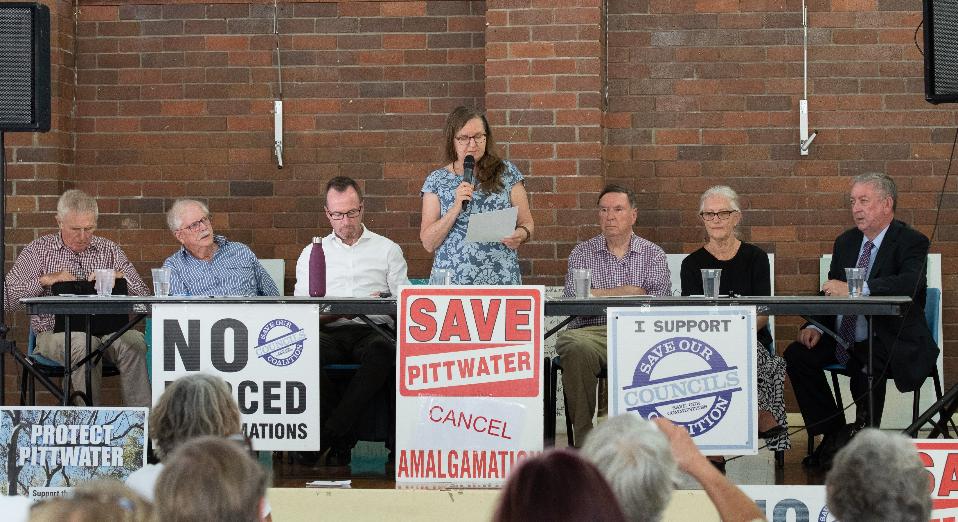 The forced amalgamation of the Manly, Warringah and Pittwater councils and how to recover Pittwater Council were the focus of a forum at Mona Vale last Sunday.

Protect Pittwater Association president Bob Grace said, “With the state election around the corner, it is time to take stock of the  amalgamated council and the prospects for a demerger.”

Also 'taking stock' is the Save Our Councils Coalition (SOCC). SOCC launched a 20 page review of the amalgamated councils across the state, Council Amalgamations a Sea of Red Ink, on Thursday at the NSW Parliament House.

“The SOCC analysis shows that the combined study of metro council operating results will deliver a $114 million shortfall below the government’s $103 million surplus. The regional and country study of 13 mega councils shows a combined deficit of $48 million. With the $375 million grants and amalgamated councils receiving $15 or $20 million each, merged councils have been trying to win community votes with news of how they are spending grant funds, even while councils’ financial results are below what was promised."

“Everyone needs to understand that this present state government merged our councils and did away with the emergency department and other acute services at Mona Vale Hospital,” Mr Grace said on Thursday.

“This is the last opportunity for four years that the people of Pittwater will have to make a stand over their council and hospital.

“Think very clearly before you vote and make sure your vote counts by numbering every square.”

Mr Grace said it was now nine months since Protect Pittwater submitted its Proposal under the Local Government Act to demerge Pittwater Council to the NSW Local Government Minister Gabrielle Upton and the group still had not received a reply from her.

Save Our Councils calls for Electors to Number Every Box

SOCC spokesman Phil Jenkyn called for the public to vote wisely at the state election.

“In this State election, it is really important that every elector number every box when voting,” Mr Jenkyn said.

“The behaviour of the Liberal/National Coalition Government has been truly appalling in its treatment of local communities.

“Save Our Councils Coalition’s view is that they have lost the right to govern and that voters put the Liberals and Nationals last.”

“We will introduce a system where if a percentage of people who are on the electoral roll in the former council area petition to have a demerger, then that’s what will happen.

“If it’s 50 per cent plus one, then the minister will be bound to make sure that that demerger takes place.

“If after the 23rd of March there’s a state Labor government in NSW, we will introduce that legislation and we hope for the support of a number of other parties as well.

Asked if a council would be able to use funds from a war chest to campaign against a demerger, Mr Primrose said:

“If a mayor wishes to use public funds to engage in that campaign, I’m going to come down on them like a ton of bricks. That is just not on. This has to be a community debate.

“Any council that tried that trick will find themselves having a very quick financial audit.

“This is a decision that is made by the local community.“

Also reaffirming the Greens commitment to a demerger process, NSW Greens Upper House MP David Shoebridge said at the meeting: “We guarantee that each of the constituent parts of any of these amalgamated councils … gets a say in a binding referendum.

“If the majority of residents in Pittwater want Pittwater back, you get it, no questions asked, no ministerial discretion; of course that’s what the law should provide.

He said there are two ways a plebiscite could be triggered: “One if you get 10 per cent of local residents in Pittwater to sign a petition – that could happen at any time.

“And at a minute additional cost, we can put on every single ballot paper in every single amalgamated council a very simple question: do you want your council back?

“And if a majority of residents at September 2020 say they want their council back, bang it happens automatically.

“But to do that, we need to throw the current government out … because they can’t be trusted and they’ve betrayed you in the past.”

Mr Shoebridge also outlined plans to prevent current councils campaigning in the lead up to a plebiscite.

“It would require councils to take a disinterested rather than advocacy approach because we cannot have the councils themselves entering the fray with all of its resources.

“So a cap on expenditure in total and a direction that they have to take a disinterested information only approach.”

One of the Speakers at the forum was Sue Young, one of the Pittwater Councillors 'sacked' by the forced amalgamation of Manly, Warringah and Pittwater Councils through the state government's Local Government (Council Amalgamations) Proclamation 2016 of May 12th. Sue provided a 'timeline' of what preceded May 12th, 2016 - a consistent and persistent 'No' to any amalgamation.

On February 28th, 2019 the Auditor-General for New South Wales, Margaret Crawford, released her report on the Local Government sector. The report focuses on key observations and findings from the 2017-18 financial audits of 135 councils in New South Wales. The report also includes commentary on three performance audits published in 2018.

This report and the interactive data tool that accompanies it, provides comprehensive and accessible information to citizens regarding the management and performance of their councils during that reporting period.