After almost two months of school holidays youngsters will be heading out the door to school on Wednesday January 31st. Some mum and dads, having enjoyed their company for most of the Summer of 2017-2018, will be seeing some students go to their first day of school and others returning for a new year at a new level. Among all that wistfulness, and a few tears on either side of the generations perhaps, there will also be a bit of glee by youngsters at being reunited with friends and glee at home as getting chores done, or getting to their job will not include so many hurdles of
"I'm bored..."
"Whhhhhhhhhhhhyyyyyyyyyy?"
or
"Are we there yet?"
Yes; we're definitely on the threshold of all the great things anothetr year of getting to learn and find stuff out brings.
Here's a take on how it was 72 years ago, after WWII, when the place to come home to was a wife, young children - and Avalon during the last month of the summer of 1946!
The Sydney Morning Herald Journalist Nigel Palethorpe (N. B. Palethorpe), was in China towards the end of WWII with another Australian legend,George H. Johnston.
In Kunming, Johnston and Palethorpe along with the townspeople celebrated (slightly prematurely) the end of the war by setting off fireworks. When they went back to the store for more fireworks, they found, Johnston wrote, that 'with shrewd oriental realization of the principles of supply and demand the price had already trebled'.- Johnston, Argus, August, 1945.
Although he must have seen and experienced things, and would continue to, many of us would have to have a long sit down and think about; the sense of pathos, joy, love and outright relief that comes through this article grants you an insight into a gentleman we should know more about:

SYDNEY, Wednesday. — This is being written on my knee at the new headquarters of Wife Force, Avalon Beach, after a gruelling three-day advance in the face of almost impossible opposition to our present position.
THE perimeter is piled high with equipment, and strong nuisance raids are still in progress from enemy snipers and jitter-parties. As I write two sticky hands are squeezing hard on my neck, and the CO of wife Force is consolidating our position despite Intermittent attacks from the rear. The campaign started a few hours after my arrival in Sydney from Batavia. It was planned to have been completed before my return, but I reached Wife HQ just in time to witness a typical home-front action.
To the CO the whole operation has been nothing but a repetition of many similar engagements as an isolated command during the war, but to the newcomer it has been an impressive: performance.
At 0600 hours on Saturday Wife Force CO drove the small bodies of the enemy into the open and began a vigorous mopping-up and scrubbing action that lasted, with a small break on Monday night into the early hours of yesterday morning.
Not an Inch of territory was spared the merciless raking fire as brooms, dusters and heavy floorcloths went in. The enemy's two concentrated forces were completely demoralised and could do nothing but make sporadic nuisance raids on cleaned-out sections of the Killara perimeter. These were repulsed with dash, and resulted in heavy losses to the enemy.
At 2300 hours, when the enemy were thought to be resting, a loud explosion shook the Killara strongpost. Shattered glass, steam and streams of hot water turned the cookhouse into a raging inferno.
Picking her way through the soggy mass of broken glass. Wife Force CO organised a reprisal party that was sent out to cut off the Electricity Commission's line of supply. This was accomplished without the loss of a single member of Wife Force, who not only neutralised the effects of the exploded hot-water system, but gathered enough reserves to launch a heavy counter-offensive that wiped out all traces of the attack.
It was dawn when Wife Force got orders to bed down for a few hours' rest before the arrival of transport and the start of the swift drive for Avalon that was designed to secure 1946 headquarters for this veteran long-range penetration group in the struggle for existence in a battle-torn city. The enemy were up early, both of them apparently greatly refreshed by their night's respite and heartened by the diversionary attack staged by the Electricity Commission.
Despite desperately strained resources, the transport column rattled Into Killara HQ yesterday at 1300. Wife Force CO, after a few brisk exchanges with the transport CO, who thought for a few moments that he outranked her, had the situation well in hand.
Equipment for the long campaign was soon piled high on the waiting one-and-a-half-ton converted truck, and, with the enemy penned into tight pockets, one on the back of the truck and the other in the driver's cabin, Wife Force was ready to start.
It was at this stage that my accreditation to the expedition was questioned by Wife Force CO, who said she was having no correspondent along unless he took part in the operation and obeyed orders. I found myself installed in the back of the truck, engaging the smaller, but more daring, enemy force in a life-and-death struggle. Furniture and baggage slithered and bucked madly as we left the Killara perimeter and headed for the coast. No quarter was given. It was what is generally described as a "nightmare journey." The enemy staged a furious and sustained offensive every inch of the way. The transport broke down repeatedly and- liaison between Wife Force and Transport Command was severely strained.
When the enemy were not attacking actively, they kept up a piercing yelling crescendo. It was nerve warfare at its worst. But never was Wife Force's CO bustled. Only comment she made in one of the few silences between attacks, was to mutter "This reminds me of the Zoo campaign in '45."
At dusk the Avalon objective was in sight. Crowds of local people lined the roadway as the convoy battled through thick traffic to the long-sought HQ. Enemy resistance, which died down to nothing more than occasional convulsive wriggles and shouts of despair, became suddenly more active. Wife Force made a last concerted dash and silenced all opposition in one brilliant sweep that left both enemy forces hopelessly trapped in the bathroom. Equipment was off-loaded, and the billy boiling for tea within a few minutes of arrival. I staggered off to sit on an upturned suitcase and write this despatch. 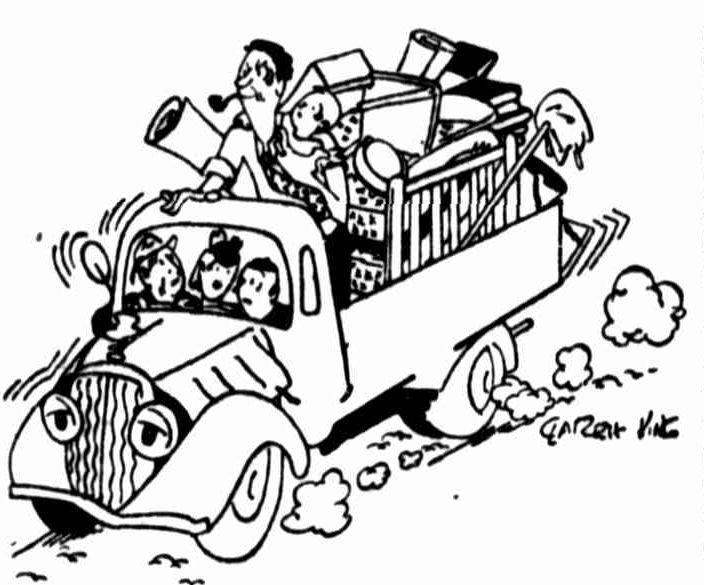 There is no accommodation for the Press and no facilities for transmitting messages, but censorship restrictions have been lifted entirely. Already Avalon HQ is humming with activity as the position is strengthened. It is now possible to reveal that the objective of Wife Force, achieved after long, bitter years on the march from one temporary and lightly held position to another, was HOME.
WIFE FORCE WINS THROUGH (1946, February 14). The Sun (Sydney, NSW : 1910 - 1954), p. 4. Retrieved from http://nla.gov.au/nla.news-article228796256
Tweet