During the week Rod and Kerry Waterhouse have won the Masters division and lead the Grand Masters with fellow club members, the team of John Duchatel and Evelyn Curtis, placed second after Day One, June 3rd.

The Women’s Class is headed by another Pittwater sailor, 2012 Olympian Nina Curtis, who is teamed with the skillful Haylee Outteridge. The girls lead out three Australian teams that complete the Women's top three after Day One's races; Meagan Bursa and Bonnie Butler and the team of Krystal Weir and Georgia Warren-Myers placed second and third at this stage.

Reports received from Bob Findlay during this week run below. Progressive Results can be viewed HERE 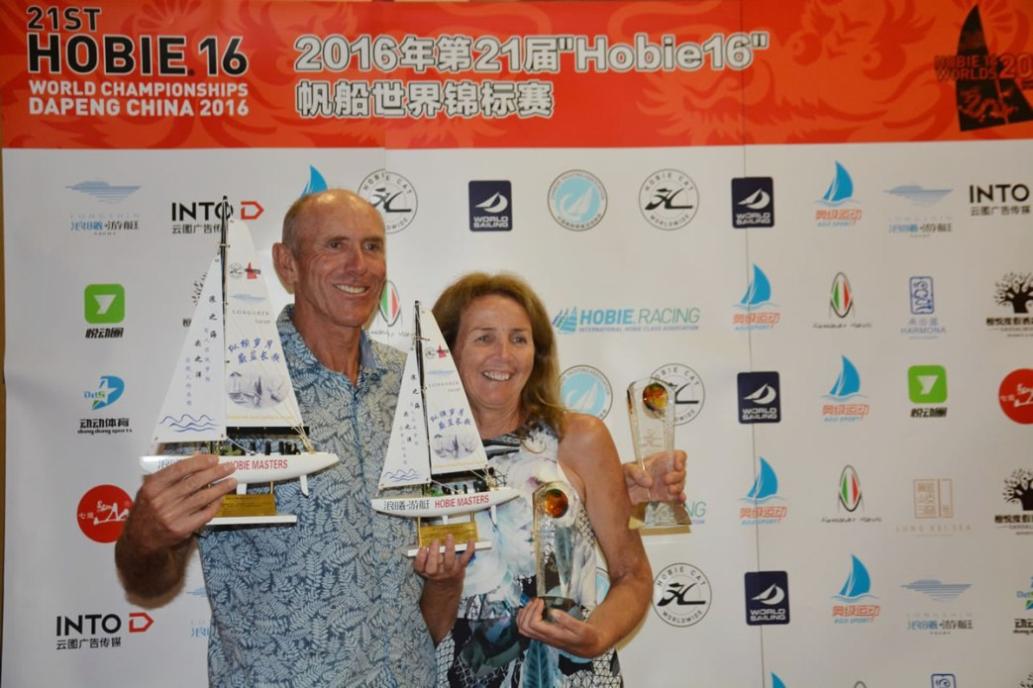 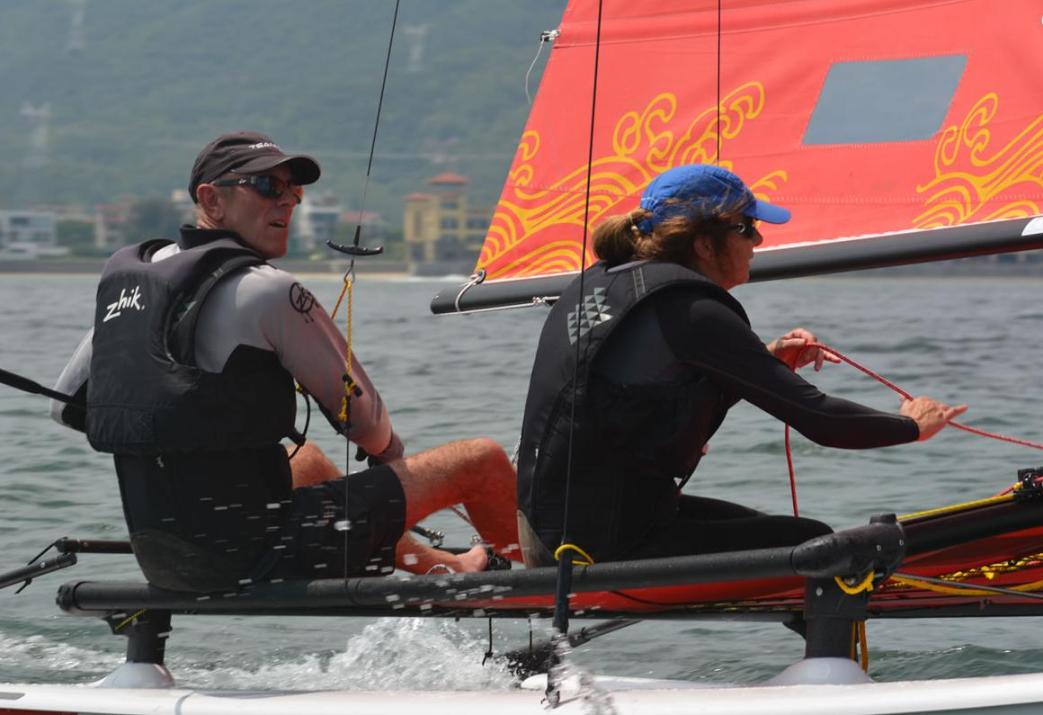 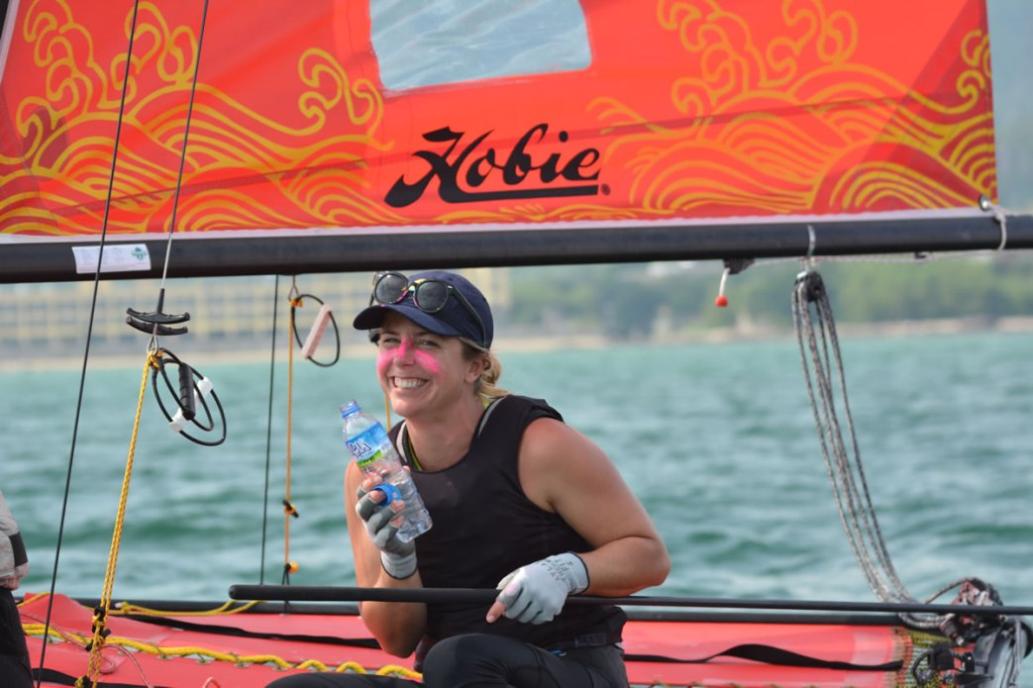 After a series of 15 races over 4 steamy days Palm Beach Sailing Club’s Rod and Kerry Waterhouse have won the Masters division of the 21st Hobie® 16 World Championships in Dapeng, China. Despite the fact that the Australians led the series from the very first race and were never headed in the regatta it was always an amazingly close contest. Positions fluctuated at the top from race to race and everyone in the top 5 had a chance to win going into the fourth and final day of this incredible series.

“It’s been quite an amazing event back to back. Kerry and I are pretty close we have been sailing together for 40 years now on Hobies so we really know each other’s game and we support each other through good and bad. From the start we looked at the competition and thought that it’s pretty serious the Masters series this year, in fact I believe the open world champion will come out of it.

We went in against a lot of tough competition and started off well. It’s an unusual location with very flat water and wind off the shore. There’s nothing certain and in fact it took quite a while for the fleet to work out whether it paid best to go left on the course or right on the first beat.

We were lucky on the first day we had a really good day and came away with four very good results. Where as our competition were having two or three good ones and then maybe a bad one. We learnt well early and as the series progressed other people got to know the track and it tended to even out and the results got close. In fact I think we held the lead, fortunately every day, but there was a different team in second position everyday which shows you how tight things were going.

On the second and third days the wind was fairly consistent, quite light but around 2pm things built and we were single wiring and double wiring, in usually the last race of each day. Everyone had their time, their day in the sun but we just stayed very conservative, we knew we had very good boat speed, we’d been working on that for awhile.

Probably one of the most difficult things was that there were a half a dozen different boats in the mix in the regatta and we started to try to cover those boats. But unfortunately, in the fluky conditions that prevailed, it became very difficult and we would cover one and maybe let three go and that’s why the results were so close and always changing.

Today was a good day but we had a really bad third race, a fourteenth, which meant that basically going in to the last race of the series, any one of five boats could win and that is quite remarkable. Fortunately for us we played, for a change quite conservatively, and that’s just not me. At the start we went to the left hand side of the course which pays 80% of the time and came out really well at the first mark and from there we really enjoyed the race because we knew we had it in the bag,

It was a great series and great competition and I pick that the winner of the Open World Championship will come out of this Masters fleet. I would say we have a really good chance to go away with the worlds but there’s at least a half a dozen teams who have an equally good chance. It could come out of the Youth, it could come out of nowhere but I think that, yes we’ve got a chance but we’re really happy to go away with the Masters. So we’ll see what happens. ”

Mick and Patrick Butler from Australia moved up to second position with a sensational effort coming home to win after sitting in last place on the starting line after the team chose to round the start mark incorrectly thinking they had crossed line early. The effort to move from last to take the lead was sensational to watch and was the most amazing win of the regatta.

William and Lucinda Edwards from South Africa were in second place going into the final day and were knocked back to third by team Butler. Things were looking good to claw second back when they crossed the line with what seemed like a run-a-away victory in the final race of the series, however there was no siren when they crossed the finish line, they had received an OCS and podiumed in third position.

It has been a sensational regatta so far with wind and racing everyday and among spectacular scenery and a beautiful beach. Tomorrow the Great Grand Masters, the Grand Masters, the Women and Youth divisions take to the water, it’s going to be another great Hobie day in South Eastern China.

New Battles But No Pirates

Last night sailors attended the presentation dinner for the Masters division of the 21st Hobie® 16 World Championships in the ballroom of the Manwan Harmona Resort. It was a excellent evening where the Hobie International Cup winners Rod and Kerry Waterhouse from Australia, second place getters Mick and Patrick Butler also from Australia and third place finishers William and Lucinda Edwards from South Africa were presented with their trophies after a brilliant series. 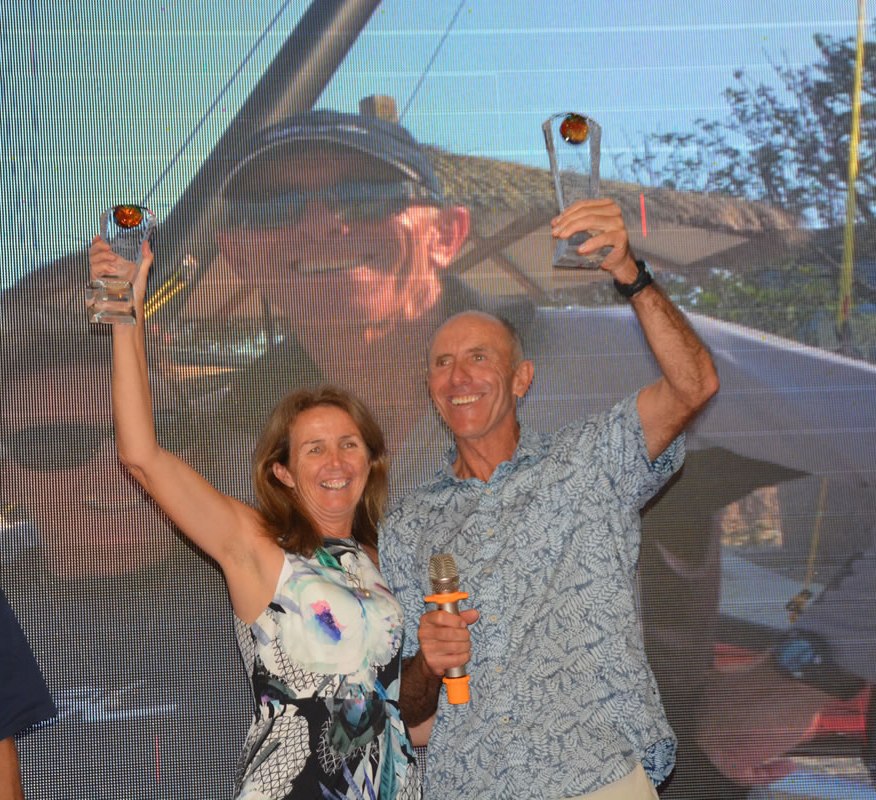 Once again we have light to medium winds predicted which will range between 7 to 12 knots, with the breeze best in the afternoon and blowing in from SSW.

The weather that we have seen throughout the Masters series appears to be holding up once again with scattered cloud in a mostly clear sky. It is currently 280C (82.50F) at 5:45am as the sun rises. The area is expecting a maximum of 330C (91.50F), it will be hot and humid and feel more like 450C (1150F). There is a slight chance of thunderstorms and an extreme UV warning is issued.

Today competitors in the Great Grand Masters, Grand Masters, Women’s and Youth divisions will battle it out for the first time at Dapeng in China on waters that centuries ago saw pirates attack and pillage the local population. A Hobie Class flag will replace the Jolly Roger today.

Series Two Takes to the Water

Yesterday the specially designed Hobie® red dragon sails flew for the second series in the 2016 Hobie 16 World Championship regatta in Dapeng, Shenzhen, China. Hobie sailors from around the world competed in the Great Grand Masters Class, the Grand Masters, the Women’s and the Hobie Youth Classes during the first day of the three day series.

The Women and Youth are each competing for World Championship titles while the Great Grand Masters, and the Grand Masters are competing to take home the Hobie International Cup in each division.

In Asian sunshine and in beautiful surroundings the first of the three races that were contested started in a full 7 to 10 knot breeze. Some competitors took a little time to adjust to their new boats, the unfamiliar water conditions with no swell, and like it had over the four days of the Masters, a breeze that came consistently in off the land from the SSW.

After the lunch break that followed race one, the teams headed out on the course once again, to a little more breeze than was present in the morning session. Having assessed the conditions from the previous race over the lunch break it was obvious that teams had made adjustments to tactics. Suddenly teams were starting to get their act together.

By the start of race three there was some serious shouts happening behind the starting line as boats jostled for positions particularly among the older two fleets on the water. Race one was a tester for some and the serious business had now started. Most boats in all divisions were double trapping across the starting line or early on up the first beat, the breeze was up the best it had been all day for the 5GO race.

The variety of conditions over the day’s three races proved to be an excellent start to the series.

At the close of day one Grahame Southwick and Sharon Rayner from Fiji are leading the Great Grand Masters followed by Bruce Tardrew and Nicholas King from Australia and Dominique Robert and Lisbeth Buonanno from France are in third place.

Masters champions Rod and Kerry Waterhouse from Australia now lead the Grand Masters with John Duchatel and Evelyn Curtis from Australia in second position and Michael Montague and Kathleen Ward from the USA in third.

The Women’s Class is headed by Nina Curtis and Haylee Outteridge from Australia over Meagan Bursa and Bonnie Butler also from Australia and completing the top three are another Australian team Krystal Weir and Georgia Warren-Myers.

The Youth division is topped by Auxence Thomas and Noa Ancian from New Caledonia, Leo Belouard and Theo Bore also from New Caledonia are in second place, with Benjamin Brown and Emily Rathburn from the USA in third place.

The 2016 Hobie 16 World Championships will be on the water again today with some excellent racing in this amazing part of the world. Stay in touch with all of the action at hobieworlds.com. 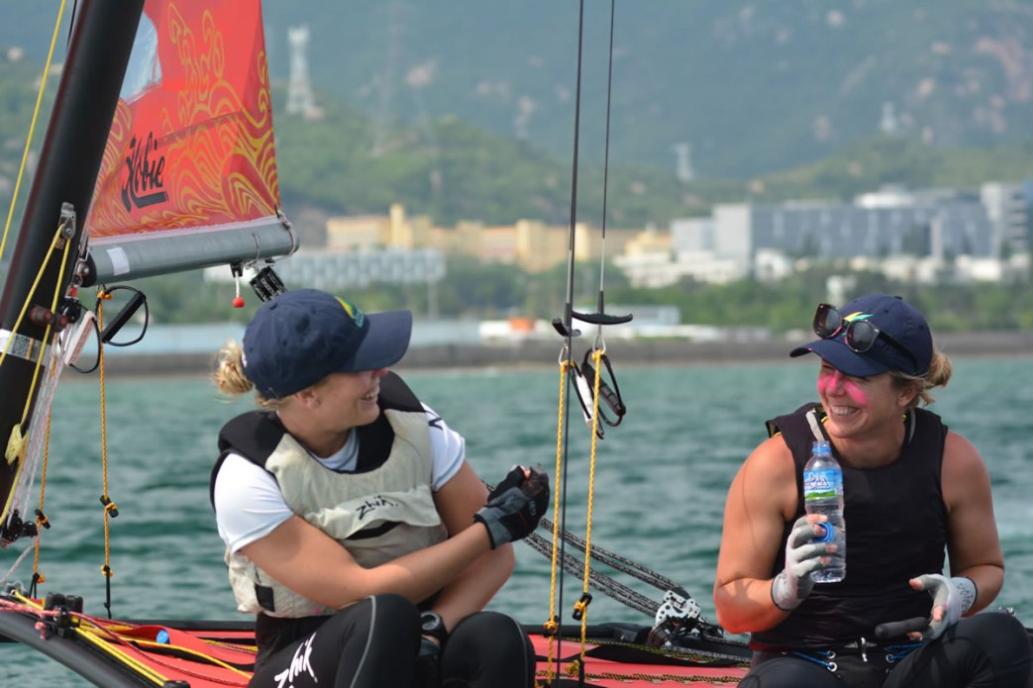 Good luck to all competitors! Pittwater sailors at the 2016 Hobie Worlds in bold 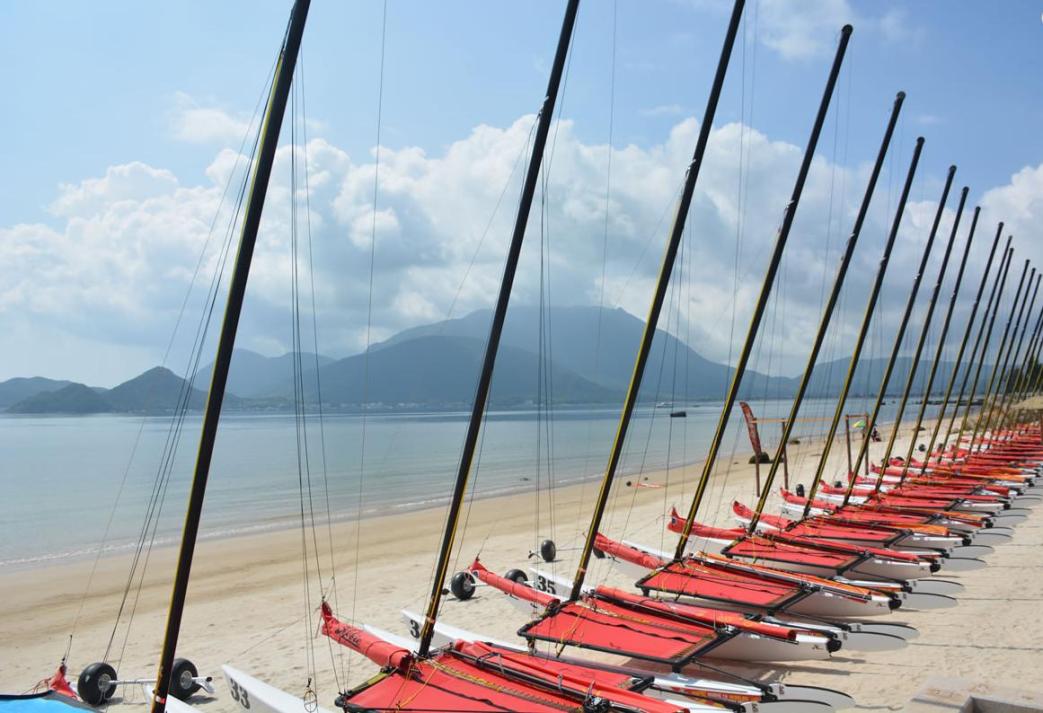 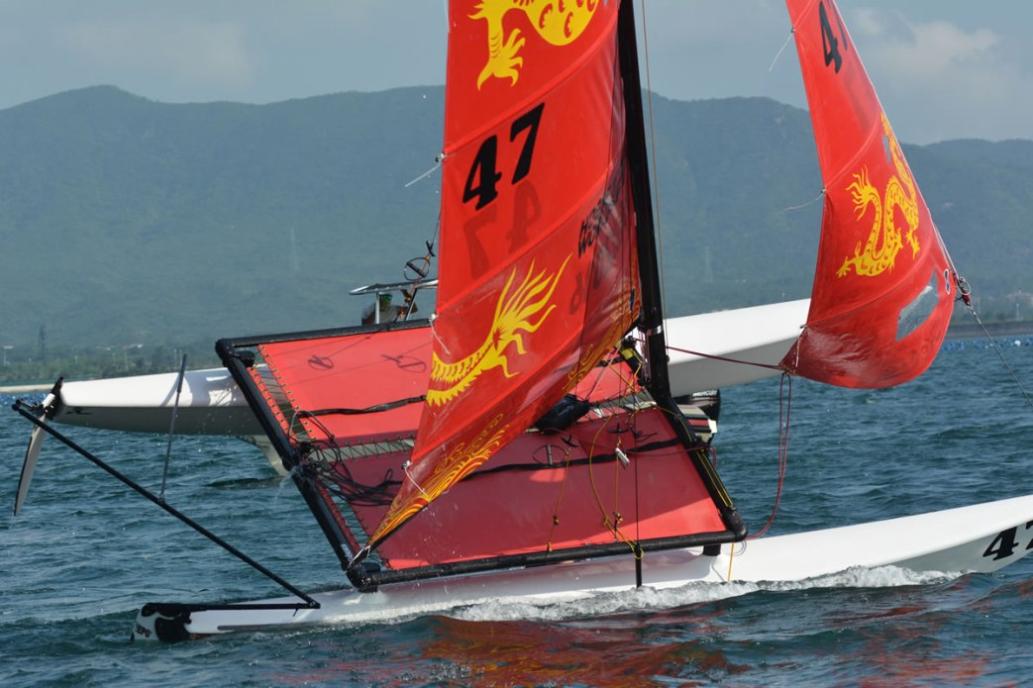