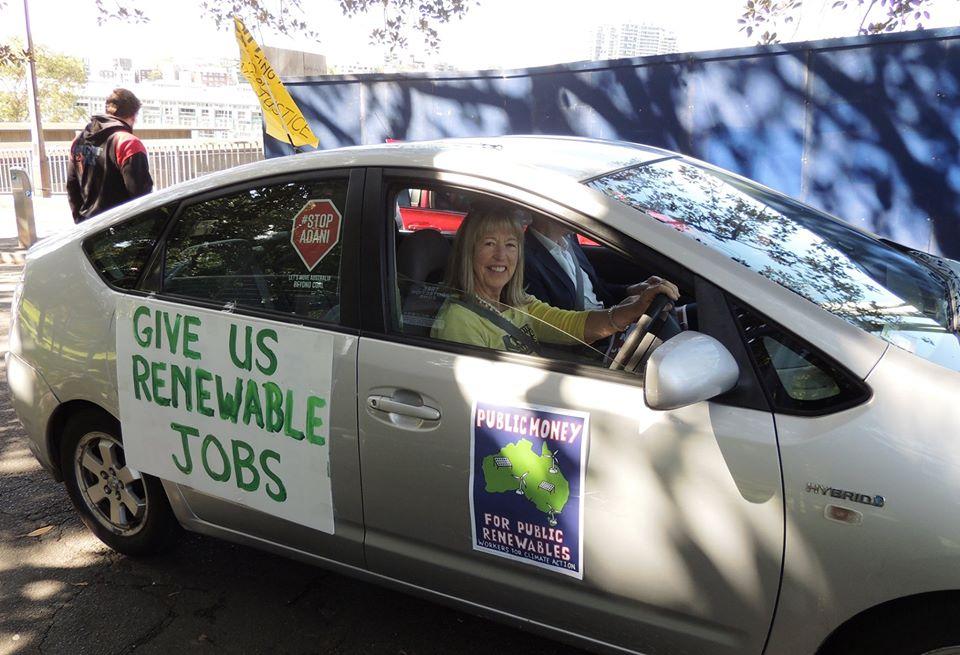 Photo: Felicity Davis driving in the May Day convoy

Pittwater environmental activists joined a large and vibrant May Day car convoy in central Sydney on Friday, adding demands for green jobs and climate justice to the usual calls for workers’ rights.

May 1 has been celebrated for more than 100 years as an International Workers Day, with origins in the US trade union movement.

A spokesperson for the Water for Rivers contingent - joined by Pittwater locals Felicity Davis and Pru Wawn - said about 100 cars led by a contingent of bike riders had cruised slowly through the city from the Domain and past the Fair Work Commission.

“This current economic shut-down can be part of a transition for society and the economy to move away from dangerous and environmentally unsustainable industries,” the spokeswoman said.

“The COVID-19 pandemic has thrown into stark relief the profiteering system that disrespects interdependence between ourselves, other animal species, and the natural world.

“We need an ecologically safe and just transition to an economy based on green jobs, sustainable industries and respect for our precious life-supporting ecosystems.”

Police in cars and on motorbikes escorted the convoy, with cars decorated in colourful banners and signs reading, for example, “Stop job cuts, climate jobs now”.

Motorists and riders were at pains to practice appropriate social distancing, the spokeswoman said.

However, in Victoria and Queensland, police have attempted to use health regulations to clamp down on protests during the COVID-19 crisis.

In Melbourne, police fined 29 car convoy protesters, and arrested one of the organisers of the protest, charging them with incitement.

“We are determined to continue to support environmental justice and put people over profit,” the Water for Rivers spokeswoman said.

“Protest is safe, inaction on climate and water crises is not.”

Water for Rivers said the agribusiness corporate model – involving privatisation, over allocation and pollution of water resources, and the pillaging of the last remaining native forests - was resulting in a crash in biodiversity and threatened all plant and animal species with extinction.

They also called for the economy to be decarbonised and renewables ramped up immediately. Other demands included: a stop to job cuts; immediate expansion of the Jobkeeper scheme; a freeze on rent, mortgages, evictions; and release of refugees.