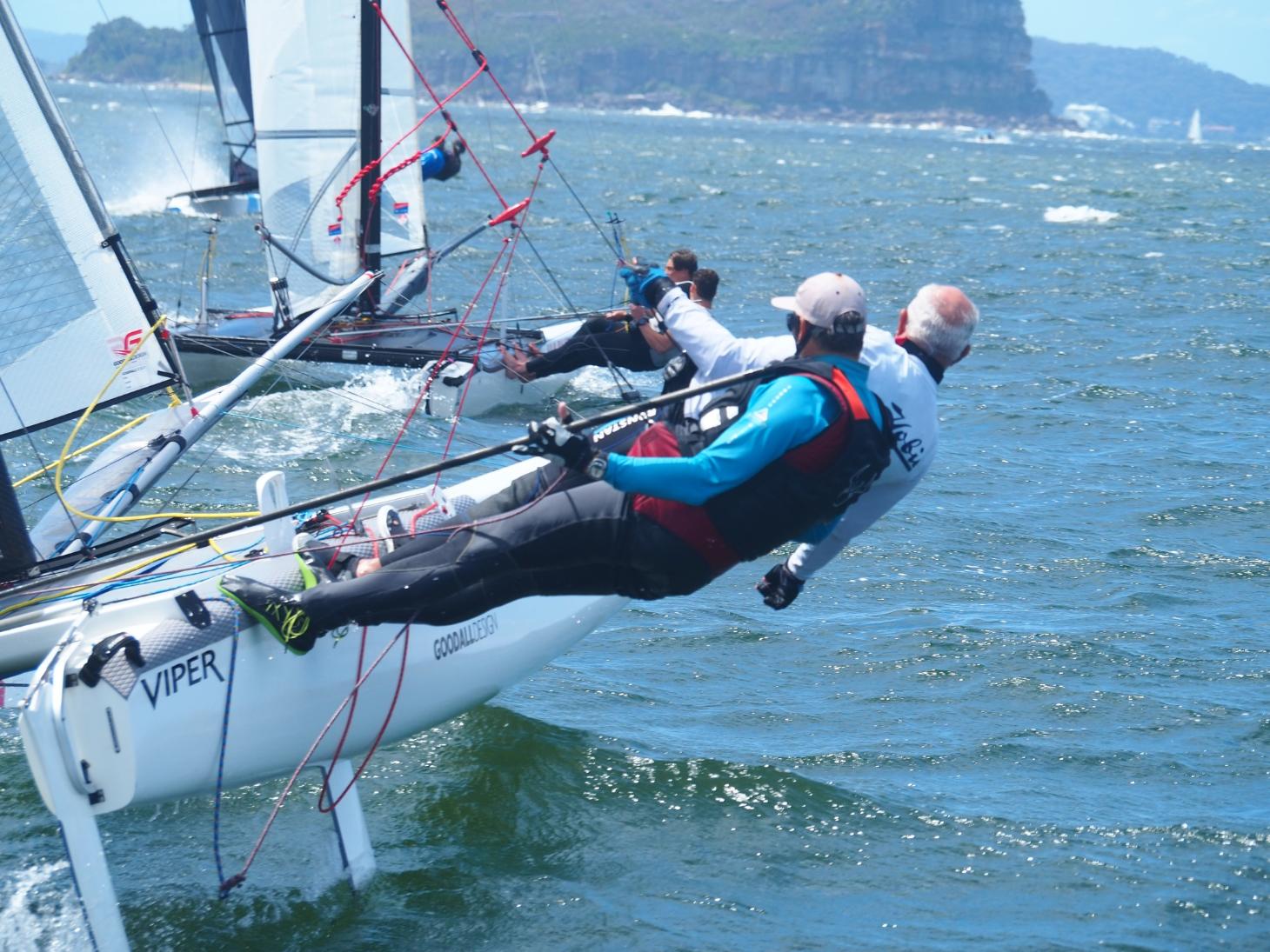 Beware The Bullets – The Match Report By Paddy Butler

It was a weekend like no other on Pittwater for the first Round of the NSW State Championships. Running in conjunction with Palm Beach Sailing Club’s annual ‘Beware The Bullets’ Regatta, fifteen Hobie 16s and five Hobie 14-Turbos hit Pittwater over the course of the weekend, taking part in what was nothing short of pure Cowboy Sailing.

However, before we get into all the nitty, gritty details you are all so desperately waiting to read, we must thank the people who made this event possible.

Dick, Dave, Ainslie and the whole team at Palm Beach Sailing Club were flawless in their execution of such an iconic catamaran regatta. Despite Guringai Country throwing absolutely everything it had at the sailors, the race committee along with all the volunteers from Palm Beach, Vincentia, New England and surrounds, were integral in making the regatta what it was. Simon and the team at The Life Aquatic were gracious in their support of the event. If you’re on the lookout for new sailing gear, look no further than their website!

Finally, we must thank the competitors that made the event happen. If it wasn’t for the support of the Hobie Family, and those that sail the humble Hobie 16, we wouldn’t have the opportunity to hold such incredibly fun and social events, both on and off the water. For that, we are forever grateful.

Now, let’s get into the good stuff.

With a swiftly building sea-breeze forecasted for the majority of the east coast, there was no turning back for our intrepid mariners. A 10am briefing saw a warm welcome from the Palm Beach locals, and a brief and precise outlook of racing from our gracious PRO, Ainslie. So, as the AP was dropped at 1100 hrs, and the sailing instructions were tweaked, it was off the beach for a maximum of five red hot races.

As the first gun sounded, it was a three minute sequence for all four starts. In the Hobie 14-Turbos, local legend Upu Kila was set to stir the pot on home turf. Laying claim to the first race, Upu went toe-to-toe with long time rival, Andrew Nelson throughout the day. Nelson, having not sailed a 14-Turbo since mid-to-late 80s, was all over it as he finished the day’s sailing with a win; reaffirming the age old statement: “you’re only as good as your last race”.

Making the trip over the Hawkesbury, Doogie was all tuned up and ready to send with his Turbo rig. However, as the breeze picked up and the limits of all sailors on Pittwater were thrust into overdrive, it was back to the beach for a yarn or two with the Jervis Bay beach team. Whilst on the topic of the south-coast, Vincentia’s home grown talent, Craig Hatton, was on absolute fire. Having more ropes to deal with than he has in his whole life, Hatto made the Turbo look seamless as bagged three bullets out of five.

Finally, competing in their first ever regatta as a team, and showing that our class has a blindingly bright future ahead of us, the Jervis Bay Groms, Zoe & Jill, were making history. Sailing Dhaawarri, (the history of which can be found on TITV’s ‘Age of the Resurgence’), Zoe & Jill were backing up what their VSC teammates, Jimmy & Brody, did only a few weeks prior at Mannering Park. Sailing in some of the wildest conditions they have ever encountered, the girls were immaculate in their grit and utter determination to get around the course upright; and for the best part of the day, that’s what they did!

Unfortunately this time round, the Tigers & Wildcats were unable to form a class. Despite that, Kerry & Andrew were having a ball on the Tiger, right up until a ‘smallish’ setback to the port rudder meant it was time to retire early on in the day. Not before racking up a top-three finish on their trusty Precarious amongst the F18 fleet. However, with a beverage in hand and a smile on their dial, they were still on the water getting in amongst all the action. Likewise, Jed & Baz decided to throw the deck-sweeper onto the Wildcat so they could have a play with the rest of the F18 fleet. Proving that the Wildcat still had what it takes to hit full speed, the big-fellas were having the time of their lives as their rigorous training schedule for the 50th Hobie Cat Nationals was thrown into overdrive. 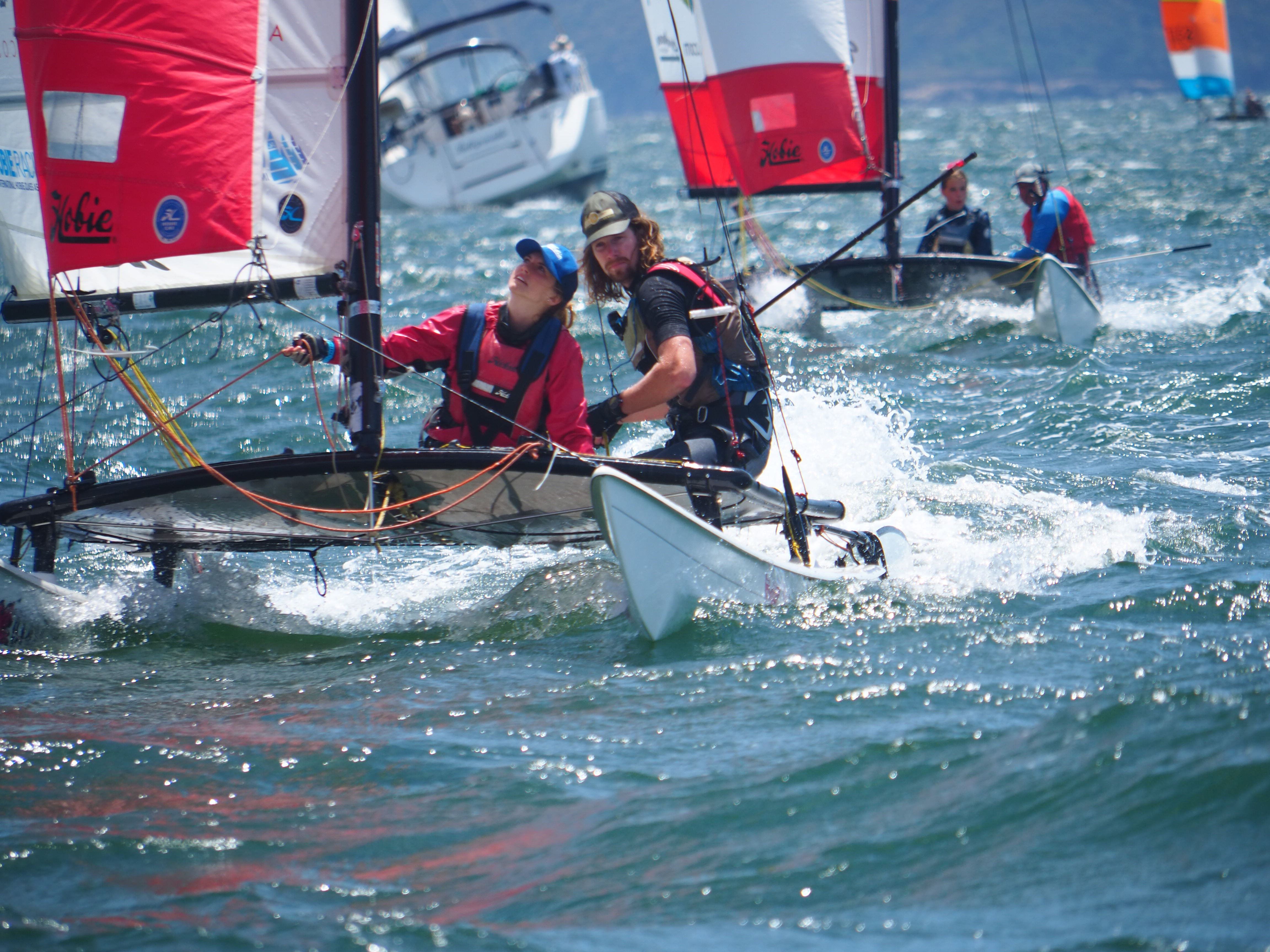 In the Hobie 16 fleet, it was nothing but smooth sailing for MB & Worsty. Running hot off a sixth at the 23rd Hobie 16 Worlds in Spain, and having nothing short of one of the greatest Hobie 16 crews of all time on the front of the boat, four bullets out of five was the least we could expect. But quite frankly, that’s the most boring part of the fleet, because all the action takes place down the ladder…

Back on the Hobie 16 after a short hiatus, Anthony & Evelyn were sailing as though they’d never stopped. The Palm Beach royals, who’s combined sailing experience is nothing short of extraordinary, were on fire during Saturday’s howling nor-easter. With three podium finishes in the first three heats, and claiming the fifth as their own, their pair were straight back to peak form as they prepared for their stab at the 50th Hobie Cat Nationals.

Also making a comeback no one saw coming, the Big-Mac and Mr. Fabulous himself were back on the boat together as if it was 2012. To no one’s surprise, Andrew and Will were dominant in the breeze, finishing with a pair or seconds and thirds, discarding an irregular, yet hilarious, pre-race incident involving a shattered tiller extension and an obliterated trapeze handle.

Making the trip all the way from Brisbane, Lachy and Sharyn flew in on the red-eye to stir things up on the Pittwater for the first time. With a bunch of top-five finishes, the pair were going head-to-head with their local training partners, Carmen and Andrew, like it was another day on Moreton Bay.

Carmen and Andrew, having only arrived back from the Hobie 16 Worlds in Spain a mere month ago, were alternating on the helm almost as much as the breeze wrapping around Barrenjoey Headland. Utilising Carmen’s boat, and the Pelican’s crispy, white ex-Worlds mainsail, the pair were starting like they stole it as Paddy and Ellie were hunting them down throughout the day.

Teaming up for the very first time, the Jervis Bay and Lake Macquarie locals were finding themselves as they went from race-to-race. However, a dip in the water at the top mark as they were hunting a podium finish meant it was back to the drawing for the remainder of the day; leading to a podium finish in the fifth heat, in what was nothing short of pure survival mode sailing.

Lucky-Dog was back in form with a brand-new crew on the front, the young yet fiery Charlotte, who’s determination to beat Paddy and anyone else she knew on the racetrack was keeping Gav on his toes. Likewise, Scott was getting pushed to his limits with fellow Palm Beach local, Rose. The pair are locked and loaded to compete in Series 1 at the 50th Hobie Cat Nationals, and we couldn’t be more excited!

Also representing the home team, Dave and Meagan were teaming up on the Hobie 16 and sailing splendidly, whilst Hayley sent it like crazy with Noah on the Viper. Additionally, John and Simone, along with Josh and Stephen, and Jon and Immy were all sailing on home waters.

As always, pushing the limits of what can be achieved on a Hobie 16, Clare and Helen were representing Vincentia with glamour as the only Womens’ team competing in the Open Championship. Leading into the Hobie 16 Australian Womens’ Championship, where a historic 12 boats are already confirmed to be competing, the Jervis Bay duo will be one’s to look out for as they send it in Series 2.

Finally, closing out Vincentia’s representatives, the youngest duo on the racecourse, Jimmy & Brody, were proving the future of Hobie Sailing is in good hands, as they sailed determinedly in the wildest conditions they’ve ever seen as a Hobie 16 team. Despite a broken tiller extension in the second heat, a couple of swims like the rest of the fleet, the boys retired during the fourth heat to provide a much needed assist to their teammates, Zoe & Jill, on the Hobie 14-Turbo; ultimately, something we’ll yarn about in a moment…

Saturday night was filled with a gaggle of absolutely knackered catamaran sailors. Whether you sailed a Hobie 16, 14-Turbo, 18-Reimagined, F16 or F18, you were feeling shattered after five brutal races in the hailstorm of bullets that was Pittwater. 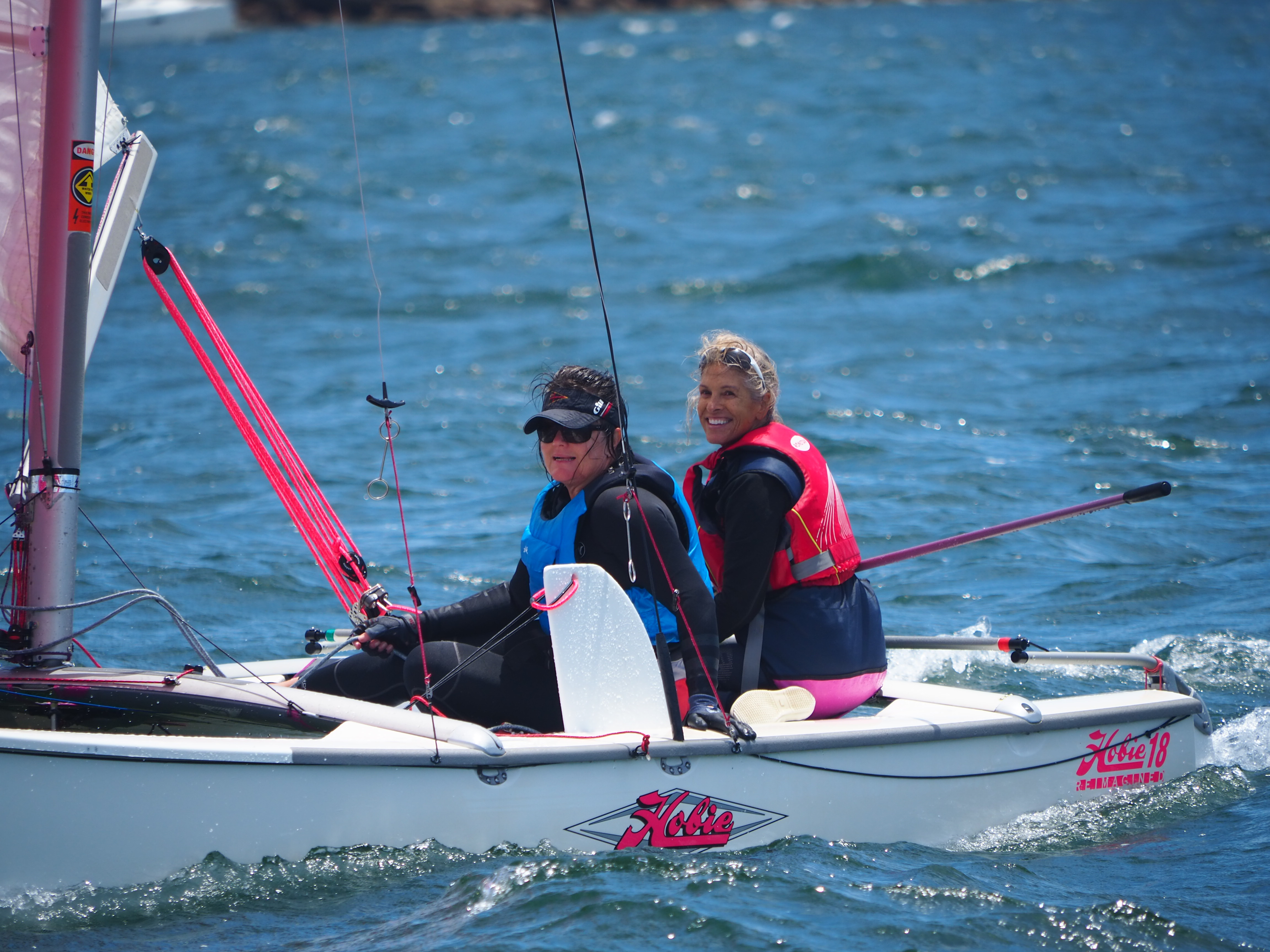 With a 30 knot westerly on the cards for Sunday morning, it was far from reassuring when the mouth of the Hawkesbury was a milk-pond when the sailors arrived on the beach, ready to make up for the previous day’s error. However, as it was anticipated, it wasn’t the case.

As known traditionally on Yuin Country on the shores of Jervis Bay, Gurugama came in hot and relentless. The few pure Cowboy Sailors, on their 16s and Turbos, who braced Gurugama with her full intensity were blown away, literally. Paddy and Ellie were blown over sideways, as were Carmen and Andrew, with absolutely no sheet tension on; whilst MB, Worsty and Jill were toppled in a gust that was nothing short of 35 plus.

So, as the abandonment flag was raised on the committee boat, all eyes were on Jimmy & Brody as they weaved their way through the moored boats, almost taking out the jetty on the shoreline; closing out the infamous, and very aptly named: ‘Beware the Bullets’ Regatta.

When all is said, and all is done…

Ultimately, the finals were as they stood after the five heats held during Saturday’s sea-breeze. All of which can be found via the link below: 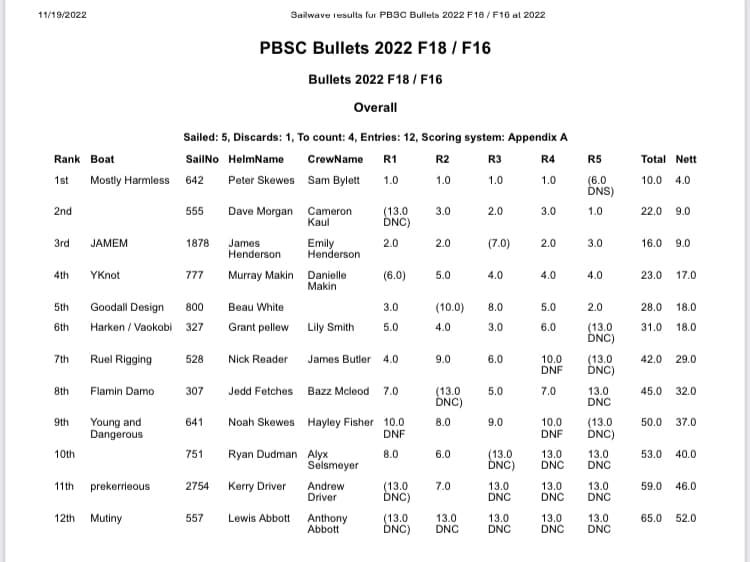 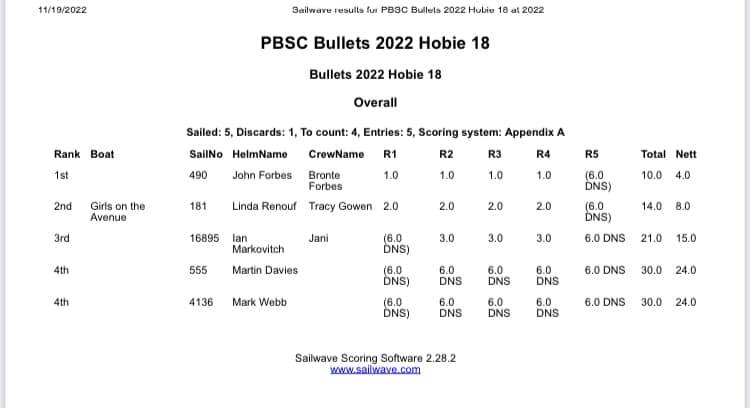 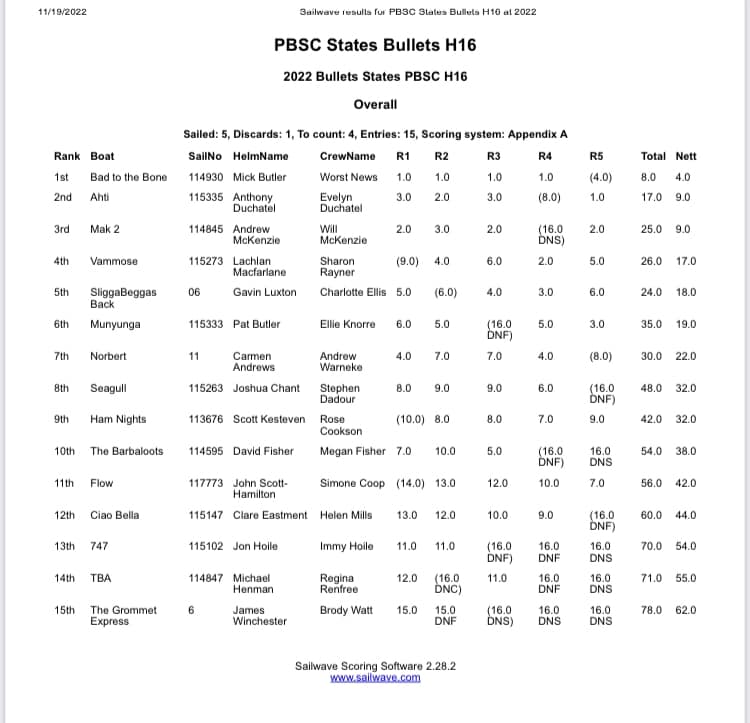 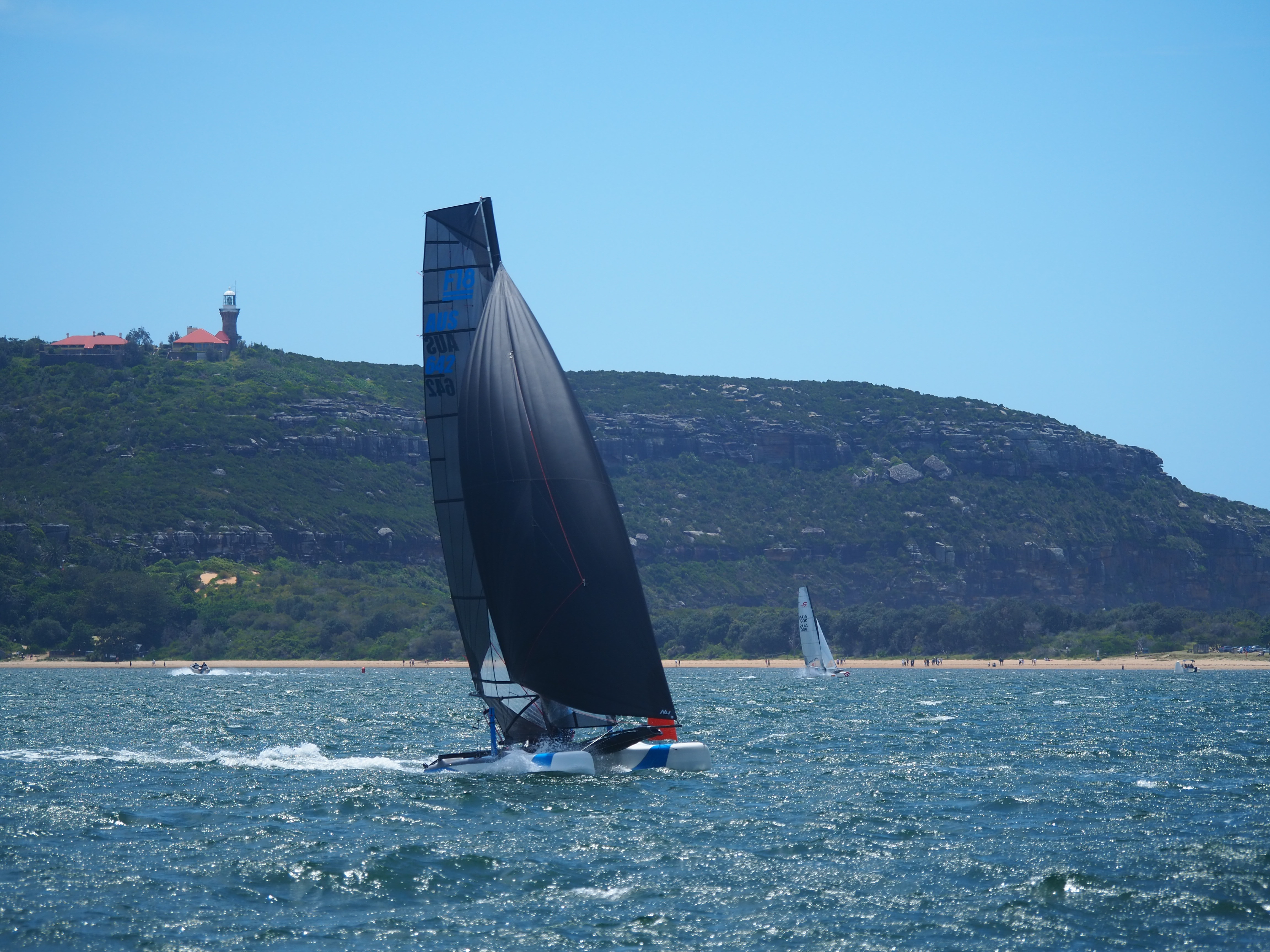 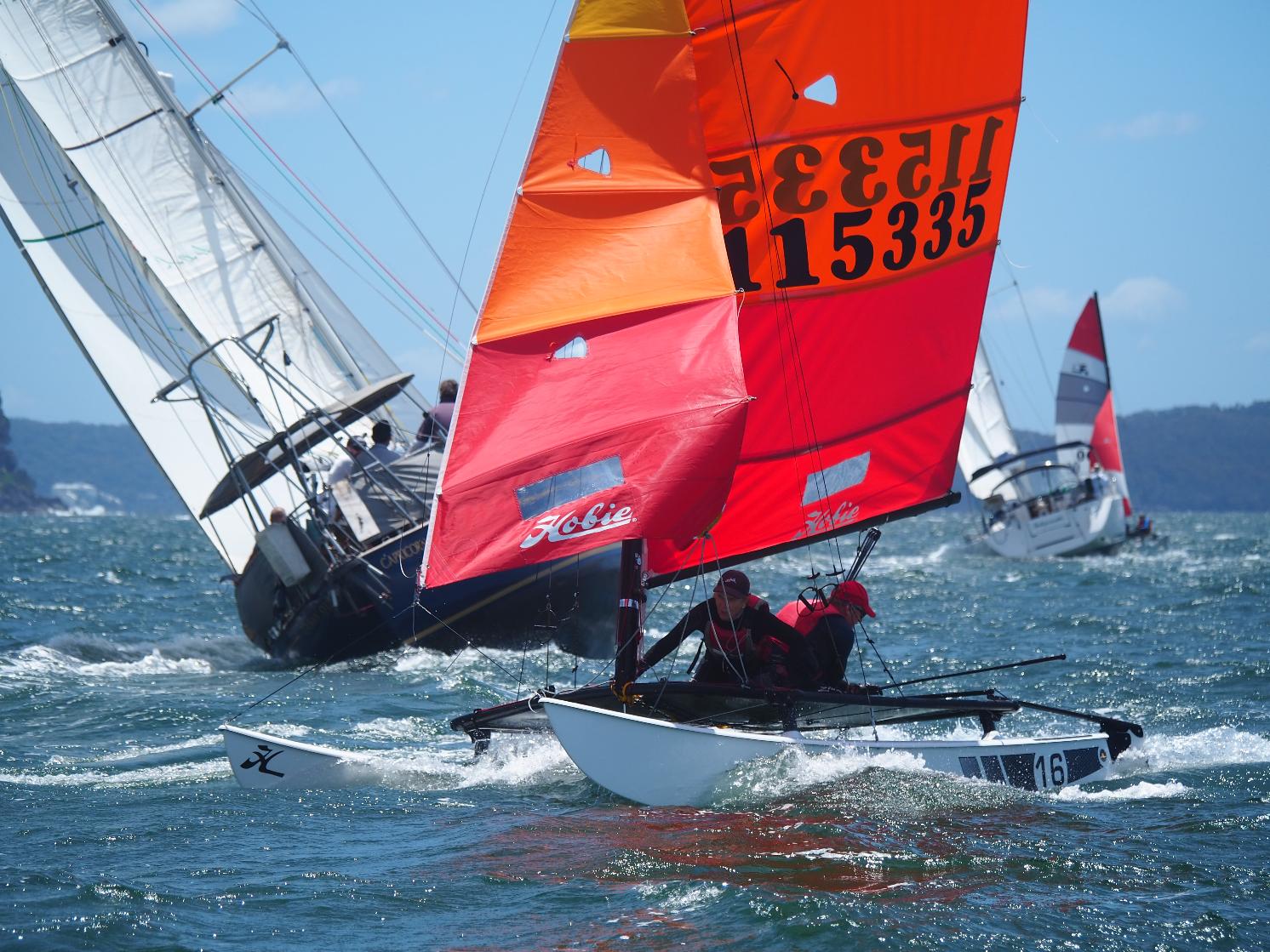