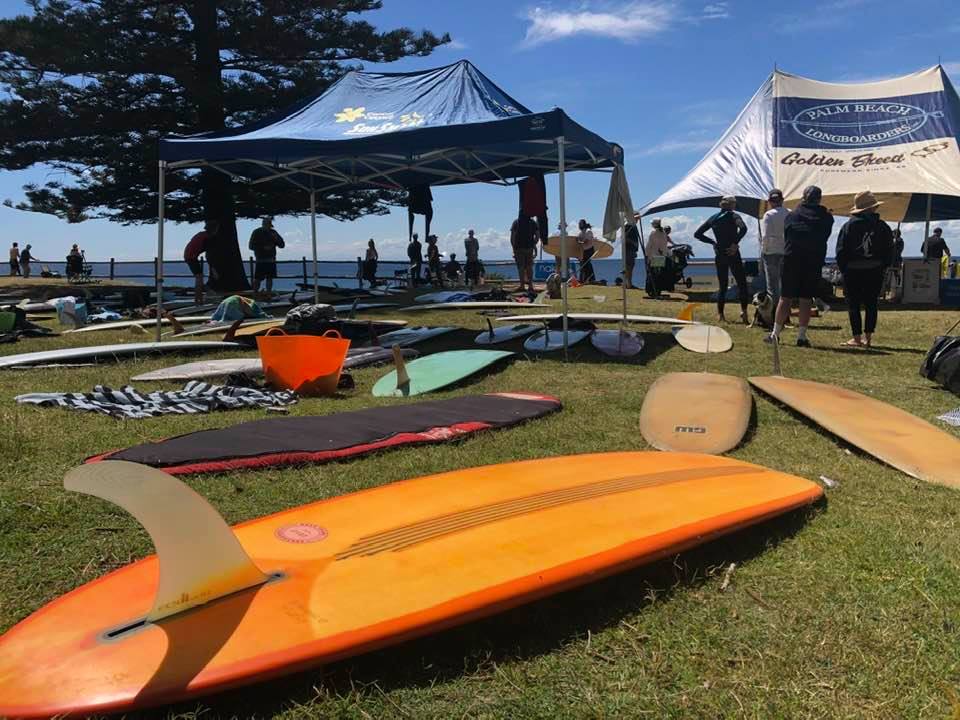 The contest is about the style and boards used pre-1968 and the judges' aim was to look for classic 60's style of surfing. Manoeuvres such as hang ten, hang five, drop knee turns, soul arch, Standing Island pull-out, stalls, head dips, and of course tube riding were the focus of the day.

The club introduced Logs into The Palmy Old Mal Rally a while back as it has become very popular in recent years amongst surfers Young and Old. The Logs are based on the pre 1968 boards with similar rails 50/50 or 60/40, single fin boxed or fixed and have to be of a weight of 6kgs. The best way to learn more about it is to come down on the day and check out the boards.

Younger surfers love the smooth ride these great old boards give you and the chance to enjoy some 'laid back' wave riding. 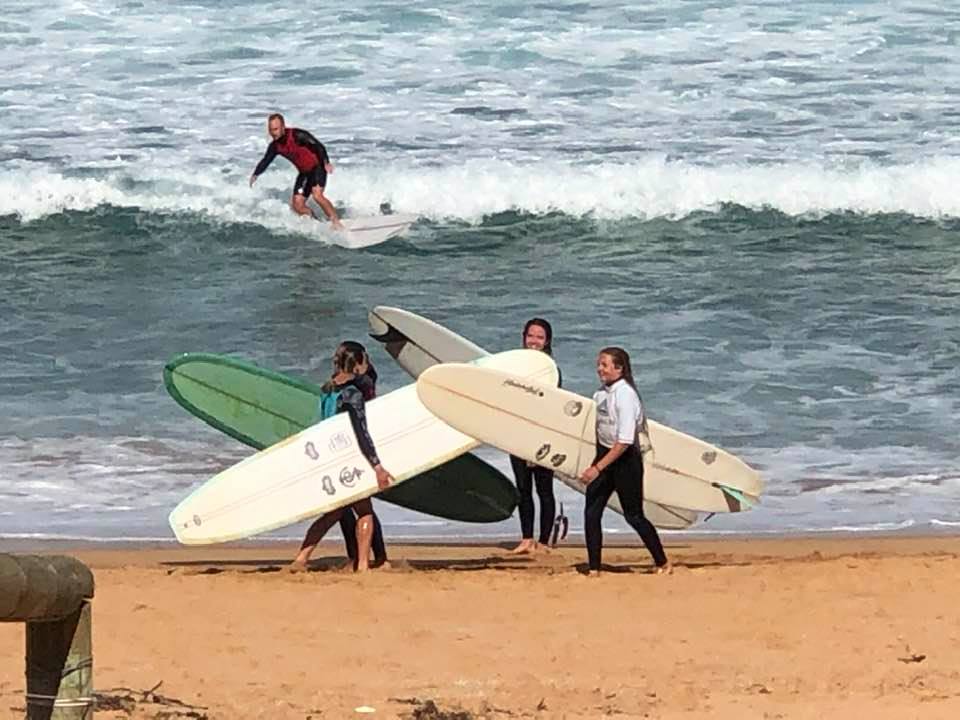 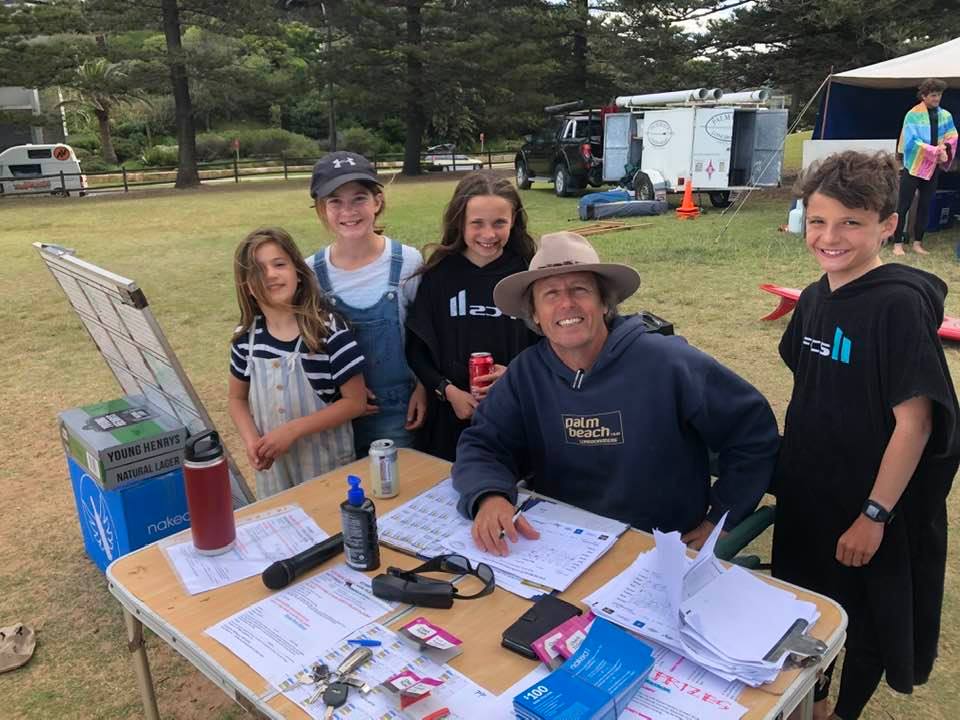 The Palm Beach Lonboarders members meet the first Sunday of the month excluding January. They hold our regular longboard surfing competition on the first Sunday of every month, from 6.30am, somewhere along Palm Beach. The Contest Director chooses the best break at Palmy on the day. The contest area can be as far south as Kiddies Corner and as far north as Barrenjoey. Visitors (non-members) are welcome to compete on a casual basis, numbers permitting. Competitors surf two heats and points are totalled for their two best waves of each heat. All members must judge a heat, miss a heat, then surf a heat.
The Old Mal- Old Log Rally also features displays of old boards and memorabilia from the era, even some great old cars! The stories around these allow those new to this style of surfing to gain insight into the culture of the sport.

Congratulations to all the competitors who participated in our 2019 Palmy Old Mal Log Rally and a heartfelt huge thanks to all the Palmy crew, their friends and family who helped out on the day.

What a great day weather wise with good conditions, fabulous surfing and a good vibe all round!

When And How The Palm Beach Longboarders Club Was Formed

Longboards are the original and very first variety of board used in standup surfing by ancient Hawaiians. These ancient boards were carved and fashioned out of solid wood, reaching lengths of 10 to 14 feet (3.0 to 4.3 m) long and weighing as much as 150 pounds (68 kg). Both men and women surfed.

In the late 1950s and early 1960s surfboard design evolved into a closer version of today's modern longboard. The materials changed from balsa wood to fiberglass and polyurethane foam and the longboard continued to remain popular. During the early 1990s the longboard integrated a number of the design features invented during the shortboard revolution. Surfers rediscovered the grace and poise – the "glide" – of the longboard, and the fun of classic manoeuvres that are not possible on a shortboard.
Today the classic single-fin longboard retains much of its original design including a single fin, weight, and considerable buoyancy. A longboard with a single fin allows the board to pivot turn in order to remain in the curl of the wave – it’s a smooth gliding style where you can catch even small waves and even those who have not stood on a board before will soon find themselves flowing with it.
Decades ago there were only two long board clubs on the Peninsula, Manly Malibu Boardriders and Reef Riders Malibu Club, at Long Reef. Two members from Reef Riders, Brett Denholm, Treasurer, and Roger Drury, Secretary and Contest Director, discussed all Reef Rider business and policies on the 190 bus trip to the city. Over many months they talked about the possibility of forming a long board club at the northern end of the Peninsula, and, as North Avalon was their home break, they decided to establish the club at Avalon Beach.
The next thing was what to call this club. There was a longboard club at Avalon earlier, called The Beachcombers, but it folded after a short time.
The name of the club, "Hole in the Wall Longboard Union," was selected and it utilised a unique rock feature on the North Avalon headland. "Hole in the Wall" was a rare geological structure referred to as a "sea-arch," and measured seven metres across the inside of the arch and some 12 metres high. At low tide, and with a small swell, it was possible to walk through St Michael's Arch (The Hole in the Wall). Due to the great gale, called "Cawarra," in 1866 Hole in the Wall was destroyed.
Further delays occurred in registering the name "Hole in the Wall Longboard Union” when the search revealed there was a hairdresser in Collaroy Beach called "Hole in the Wall." Eventually the name cleared and the time was right to find interested club members.
The Hole in the Wall Longboard Union was formed at a meeting of interested longboard riders at North Avalon car park on Sunday October 11, 1992.
The inaugural committee for the 1992-93 season was as follows:
•    President: Brett Denholm
•    Secretary: Suzi Parker
•    Treasurer: Peter Christie
•    Contest Director: Roger Drury
•    Media Officer: Ken Robertson
•    Committee: Ian Williams, Peter Brunker
The annual membership fee was $10.

A Concise History of Palm Beach Longboarders courtesy of Roger Drury {The Chief}
The inaugural points score contest was held Sunday November 8, 1992, at North Avalon Beach in perfect conditions. The temperature was a warm 27 degrees and the surf, a clean, three-four foot. Eighteen members attended, with a good number who had never participated in a club before.
The first round consisted of four-man, 15-minute heats, and the second round was extended to 20 minutes. The standard of surfing was high, with Adrian Van Der Wallen taking the trophy (kindly made by Peter Christie) from Russell Phillip on a count back.
After the contest, a good number attended the BBQ at Brett Denholm's house, where the home brews appeared to be the order of the day. It also gave members the opportunity to congratulate Roger Drury on his 45th birthday. He was relieved to learn he was not the oldest member of the club.
The 18 longboard enthusiasts who fronted up for the historic inaugural contest were: Max Crompton, Peter Christie, Brett Denholm, Kyle Bowden, Greg Harris, Roger Drury, Benjie McNair, Peter Nash, Michael Nolan, Garry Robertson, Ken Robertson, Russell Phillip, Peter Townsend, Adrian Van der Wallen, John Van Der Wallen, Peter Vlug, Ray Scott and Bruce Usher. 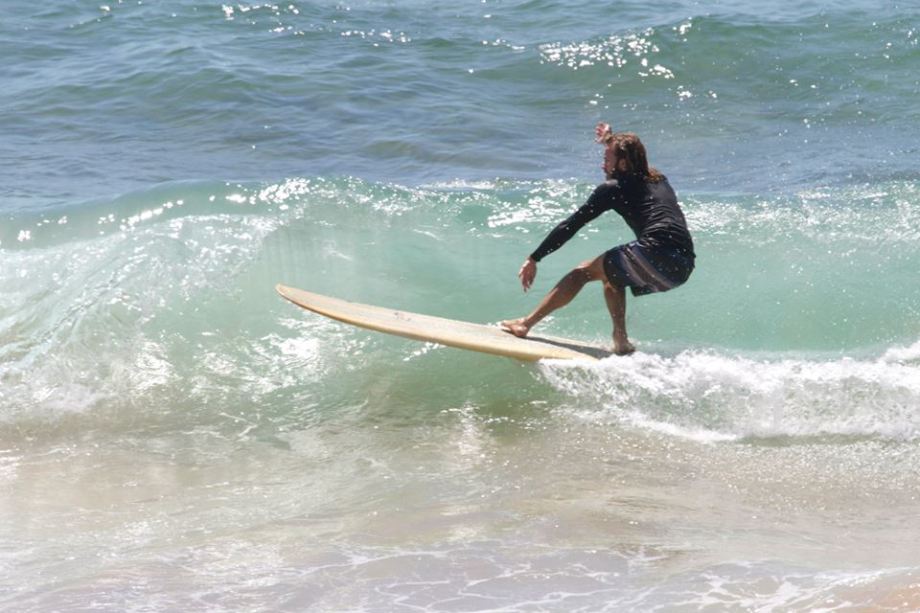 At the February 21, 1993 contest, Old Mals were introduced to the club competition programme and those inaugural competitors were Jeff Andrew, Ken Robertson, Brett Denholm and Roger Drury.
The first presentation of trophies resulted in Peter Christie on 71 points winning the Modern Malibu, and Roger Drury on 25 points winning the Old Mal points score.
In September 1994, the committee approached Mick Dooley to be "Hole in the Wall's" club patron. Mick was elated by the proposition, and to this day still makes time to attend each club contest. For the next three years "Hole in the Wall Longboard Union" grew from strength to strength.
In 1995, with a new committee, it was decided to put a motion before members at the May 13 points score competition to base the club at Palm Beach, and also change the name and company logo. Ninety-eight percent of members voted to not only relocate but also for the club to change its name to "Palm Beach Longboarders" with the first contest held on the first Sunday in July at mid Palm Beach.
The first points score for the new club was well attended with the waves being very challenging with quite a few five foot close-out sets.  Due to treacherous conditions, the Old Mal heats were called off.
Winners of the divisions were:
•    Firsts: Gary Burden
•    Seconds: Adrian Van Druten
•    Thirds: Chad Andrew
•    Fourths: Curtis Field
On Saturday March 23, 1996, Palm Beach Longboarders held their inaugural Old Mal Rally. This contest was conceived to promote sportsmanship, competition and traditional surfing.
The day was particularly highlighted by the attendance of Mick Dooley, Garry Birdsall, Barry Kirkham, Dave Wilson, Midget Farrelly and Jack Eden, who represented the era and celebrated the Rally.
The day was well rounded off with the presentation of trophies at the then Flamingos Restaurant, Palm Beach, with a great view of the days venue.
Results were:
•    1st Bill Morris (DV8s)
•    2nd Glen Arkintsall (DV8s)
•    3rd Brad Whittaker (Cronulla)
•    4th Dane Wilson (Cronulla)
In 2001, our then President, Gary {Cookie} Cook, or Secretary Peter Fodor, and our Contest Director, Grant Salmon, secured Golden Breed as a much-needed sponsor for the club, ensuring that the immediate financial future of Palm Beach Longboarders was secure and healthy.
From its humble beginnings Palm Beach Longboarders Club has grown into the club that you see today with a membership of over 70 surfers.
The club, over the years, has been able to provide financial assistance to various organisations in time of need, such as the Disabled Surfers Association, Papua New Guinea Tsunami relief Fund and more recently the NSW Bush Fire Appeal.
Find out more by visiting their Facebook page at: www.facebook.com/Palm-Beach-Longboarders-Inc 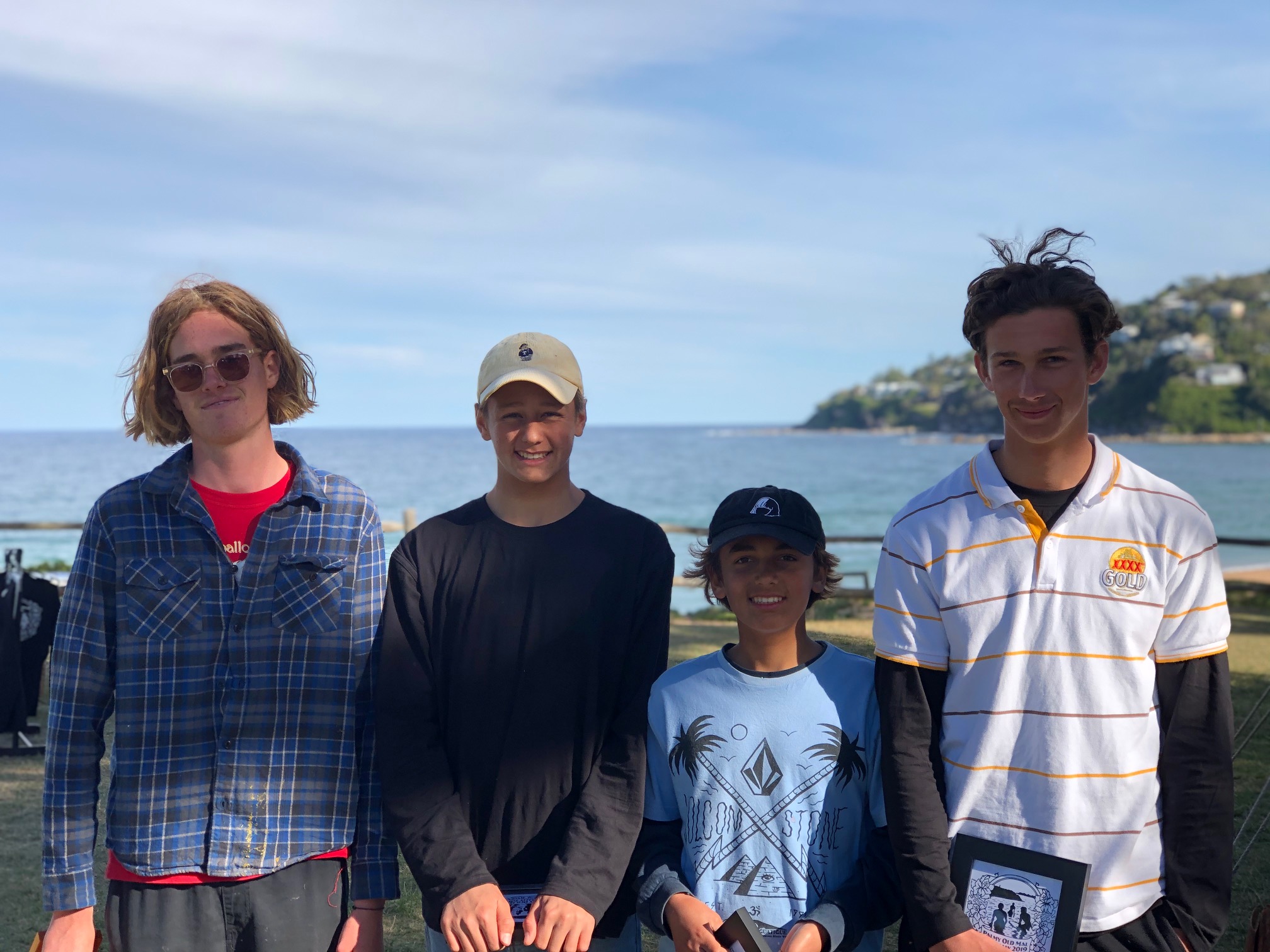 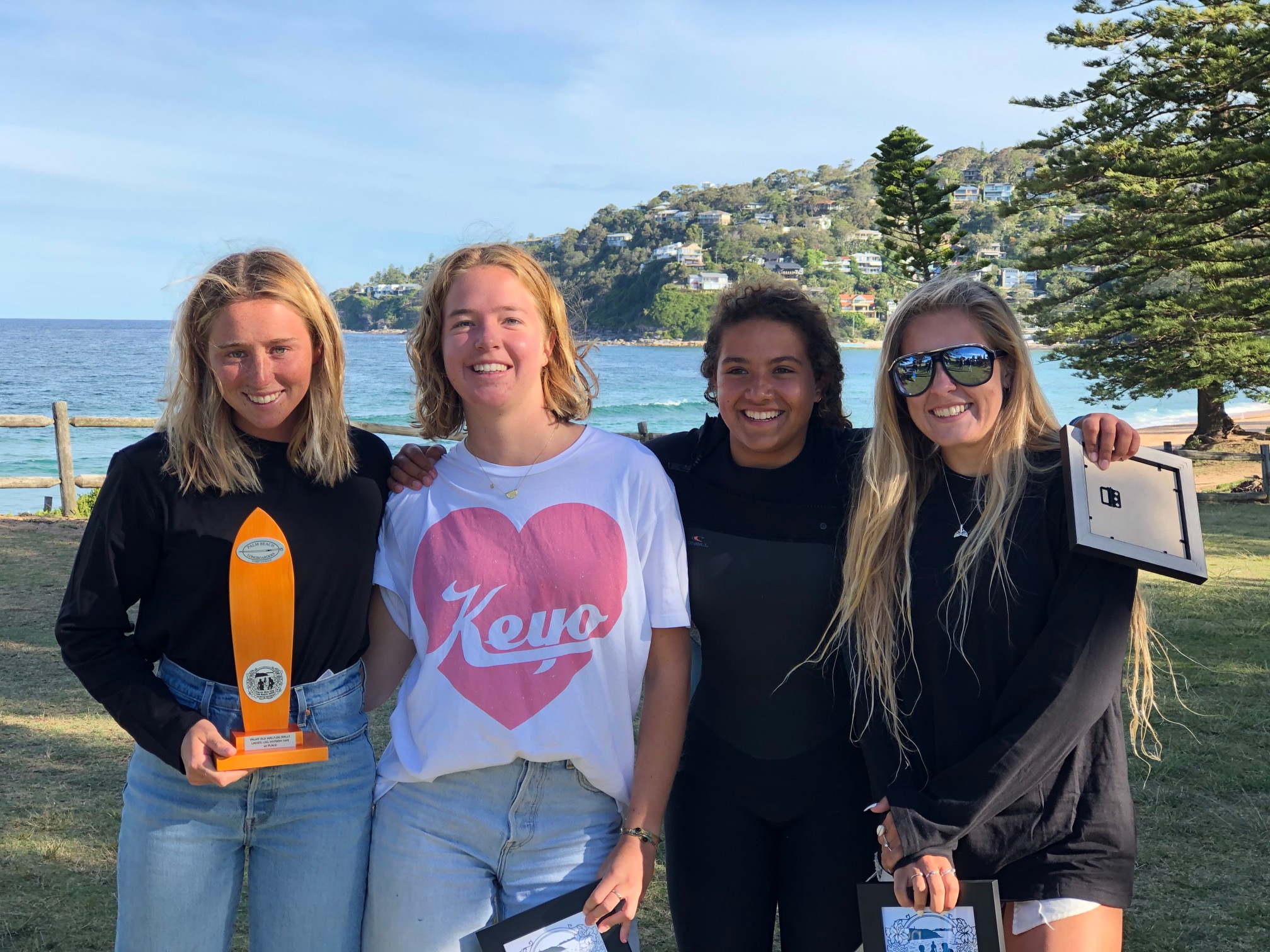 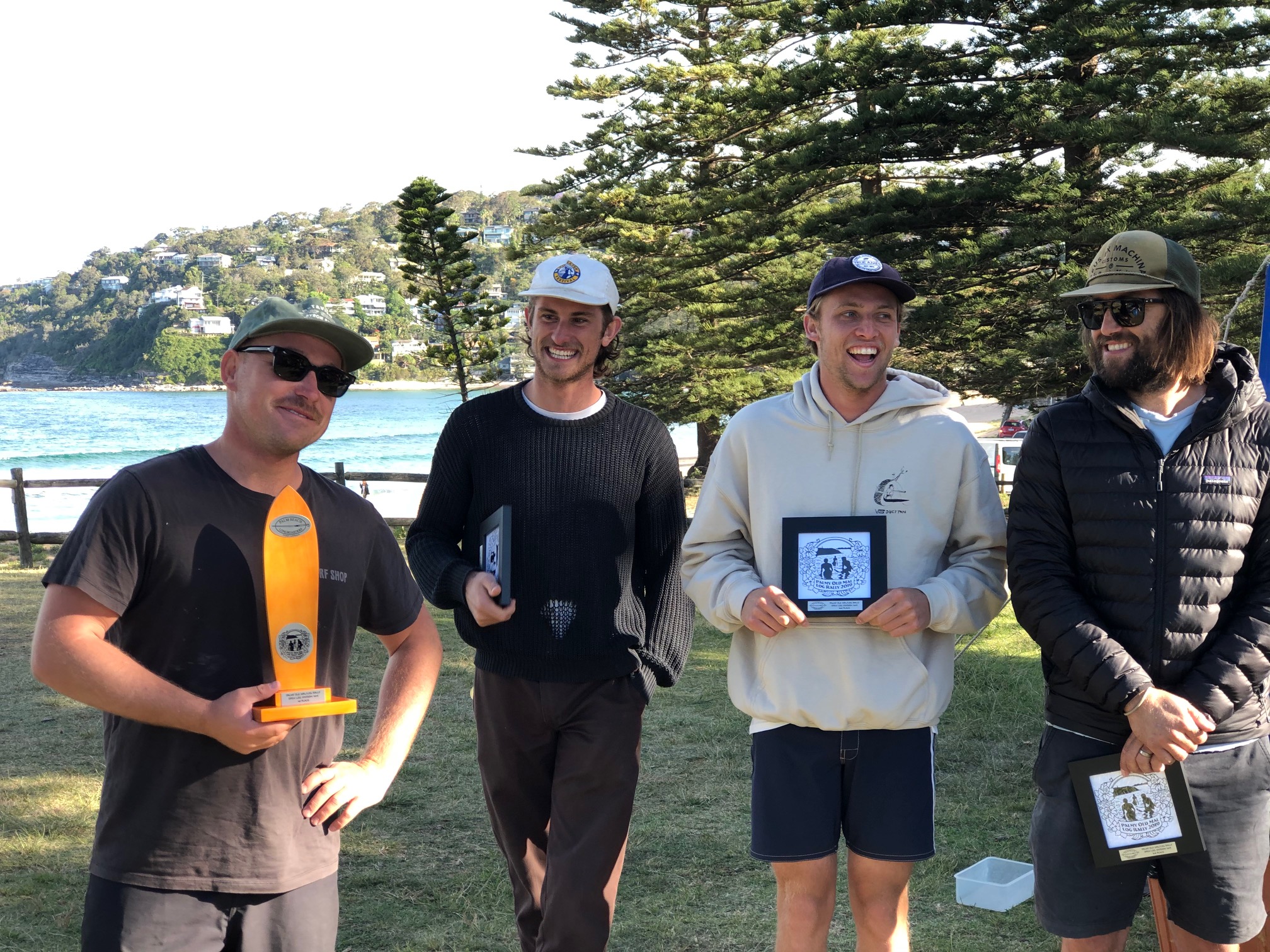 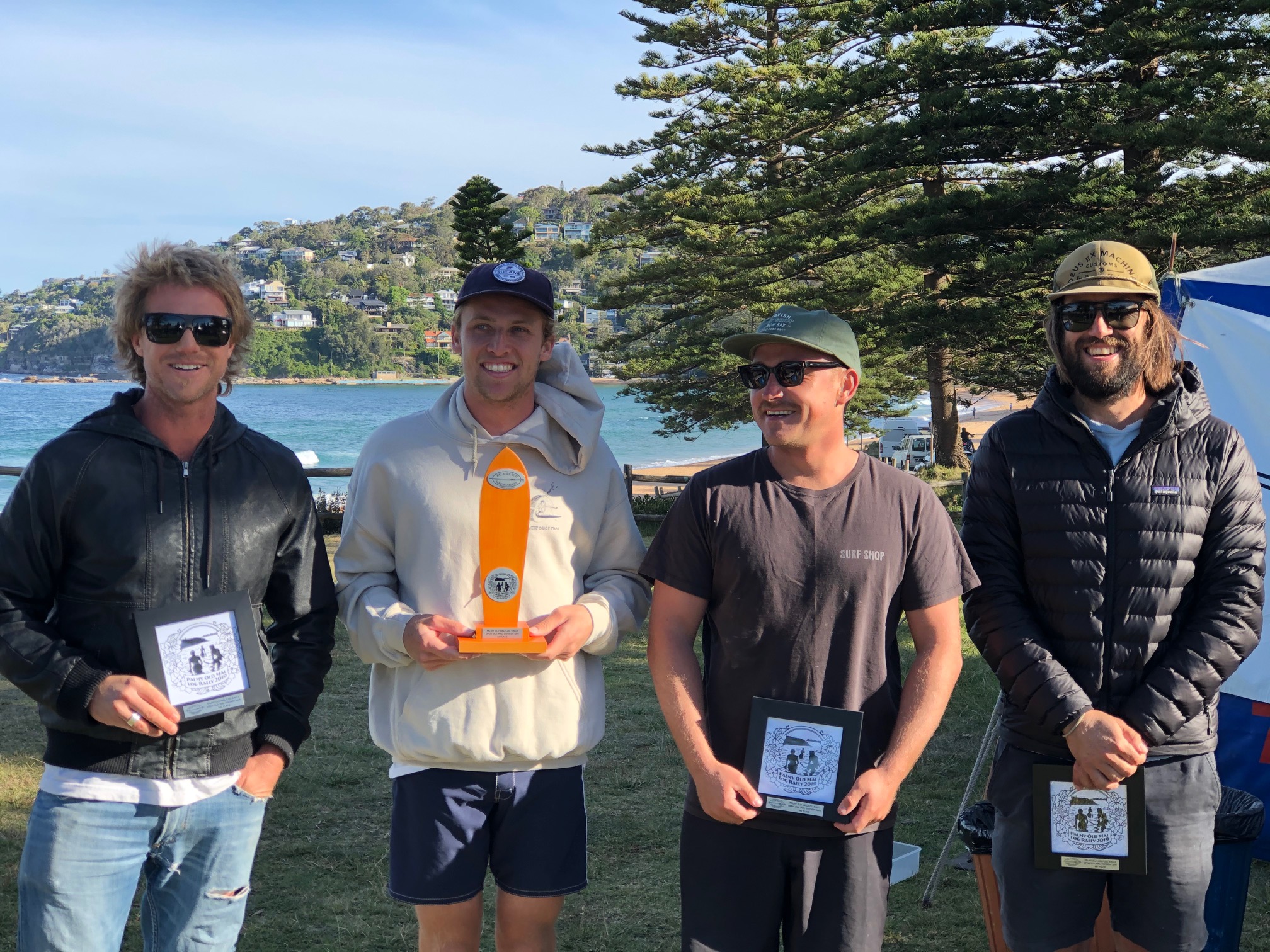 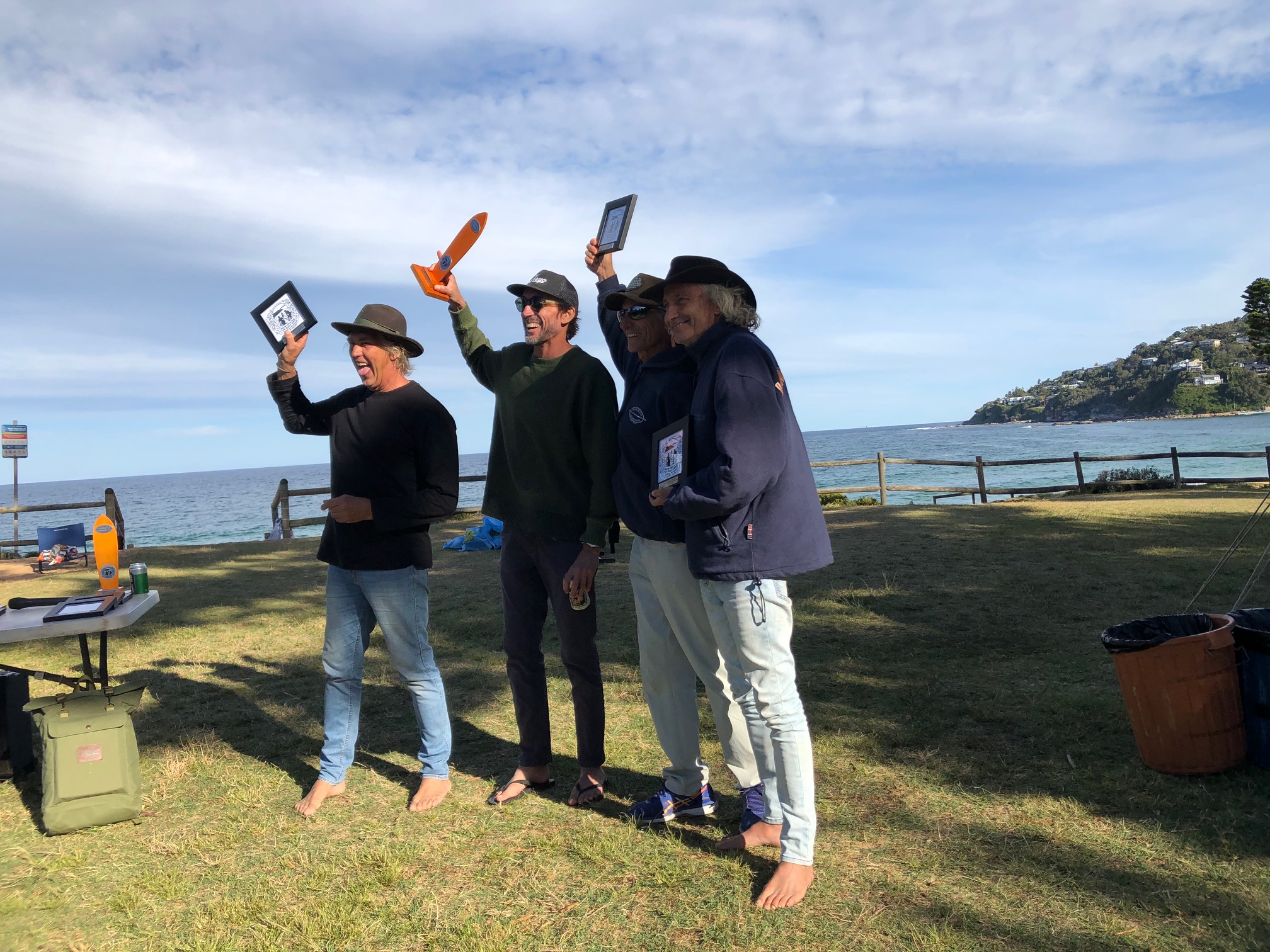