A Painted Button-quail, seldom seen, was saved by Penel Bigg’s father on Monday morning. Mr. Bigg rescued the tiny bird from the family pool where it was found floating and exhausted. Penel quickly got in touch with Lynleigh Greig, a Sydney Wildlife volunteer, who came and picked the tiny bird up, had it checked by a vet and then cared for it at her home.

“She appears to have a concussion and is still a bit wobbly, very nice to see she is now opening her eyes though.” Penel said late Monday

On Tuesday morning, Penel said, “have just heard from Lynleigh that after a vet check this morning she was released back in the wetlands below my place, such good news.”

“Yesterday would have been my Mum's 94th birthday - she was a mad keen birder (funnily enough called Robin, Robin Phillips). A lovely synchronicity that my Dad rescued this bird yesterday!”

So we now know there is at least one Painted Button-quail residing in the Warriewood wetlands – Elanora Heights area!

If you find a native animals in distress or injured in our area, whether feathered, furred or scaled, please contact Sydney wildlife and one of their trained volunteers will be able to help you help save that creature. Ring Sydney Wildlife 9413 4300 or Wires 1300 094 737

The painted buttonquail was first described by the English ornithologist John Latham in 1801 under the binomial name Perdix varia.

The painted buttonquail is about 19 to 20 cm (7.5 to 7.9 in) long. It is a ground-dwelling bird and is found in grassy forests and woodlands. It feeds on insects and seeds. Often the first sign that a Painted Button-quail is present in a dry, open forest is not a sighting of the bird, nor hearing its call, but a shallow depression of bare soil among the leaf litter. These bare patches, round and about 15 centimetres across, are called platelets or 'soup-plates'. Painted Button-quails forage for seeds and insects on the ground by spinning about on alternate legs to expose items of food among the leaves and on the soil surface, and it is this action that forms the platelets.

Painted Button Quail are active during the evening, night and early morning, feeding on the ground. They are usually seen in pairs or small family parties, searching for seeds, fruit, leaves and insects.

The female is the more brightly coloured of the sexes. Her eyes are red, and her crown, face and breast are flecked with white. Her shoulders are chestnut with thin white streaking above them. The male is slightly smaller and duller in colour.

While not much is known about its breeding cycles, the indications are that the female is polyandrous, that is, she courts a male, mates and lays his clutch of eggs, then leaves him and searches for a second male to repeat the process. Females in captivity have had 3-4 mates and clutches in a breeding season. The female builds a domed nest of leaves, sticks and grasses beneath a tussock of grass, or at the foot of a rock or sapling, and lays 3-4 eggs at a 2-3 day laying interval between each egg. The male incubates the eggs once the clutch is complete, and all the eggs hatch at the same time. The chicks leave the nest immediately and are only fed by the male for 7-10 days. The chicks can fly 10 days after leaving the nest.

The painted buttonquail is native to Australia. Its range extends from Queensland southwards to New South Wales, Victoria, South Australia and Tasmania. A separate population is present in the southwestern part of Western Australia. The subspecies Turnix varius scintillans is endemic to the Houtman Abrolhos islands off the west coast of Australia. Another subspecies, Turnix varius novaecaledoniae was endemic to New Caledonia but is believed to be extinct as it has not been recorded since 1912.

The painted buttonquail has a wide range. An estimate of the population size has not been made but numbers are suspected to be in decline. It is said to be common in suitable habitat in some areas and uncommon in others. Temperate and eastern tropical forests and woodlands form the habitats of this species. They appear to prefer closed canopies with some understory and deep leaf litter on the ground.

These birds range almost continuously, in appropriate habitat, from about the Atherton Tableland in Qld, round the coast to the Eyre Peninsula and north to the southern Flinders Ranges in SA, avoiding only the driest regions of Qld and NSW. A second population occurs in southwestern WA up to Shark Bay. They also occur in Tasmania and on all the larger, coastal islands. 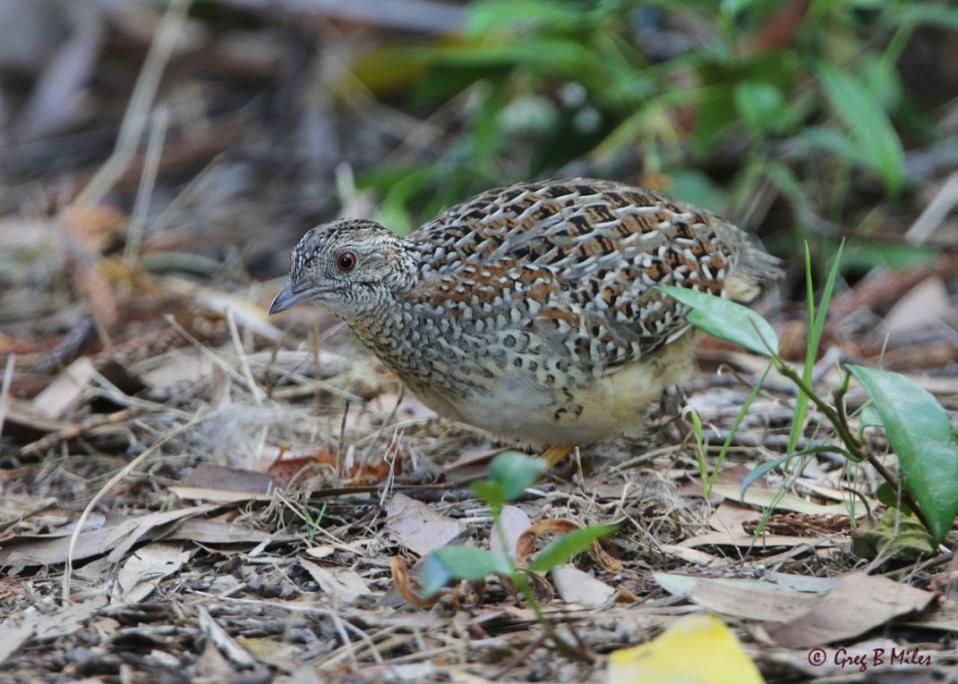 These little Button-quail arrive about this time every year at our place (January). I wondered where they went for the rest of the year so I did some research on the 'net and found out that they are sedentary in some parts and migratory in others but it is unknown where they go! I usually find them extremely hard to photograph but this one is an exception being more wary of a nearby Eastern Yellow Robin than the photographer! Photo and text by and courtesy Greg Miles, near Gosford from Australia - Painted Button-quail
Tweet